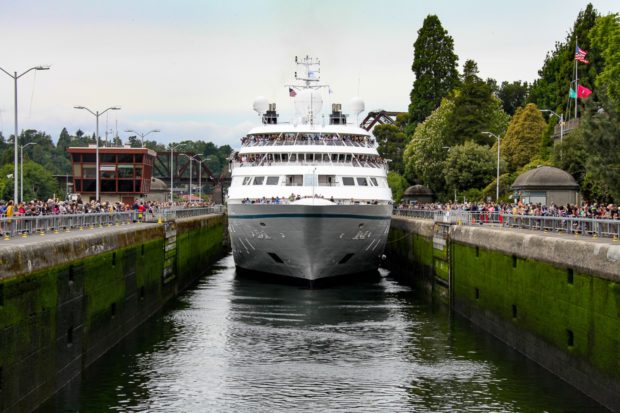 Summer cruise season is in full swing and I recently spent a day aboard the Star Legend, one of Windstar Cruises’ six ships. It wasn’t all balmy breezes and champagne—although there was that, certainly. The day-long outing was a celebratory cruise for the Seattle-based company’s office staff, Seattleites, and members of the press. Our cruise took us from the Port of Seattle, through the Ballard Locks—with just 12 feet to spare—and into Lake Union—making history as the largest ship to do so. The event combined the fun of an indulgent day on Puget Sound with the chance to see a truly fascinating feat first-hand. 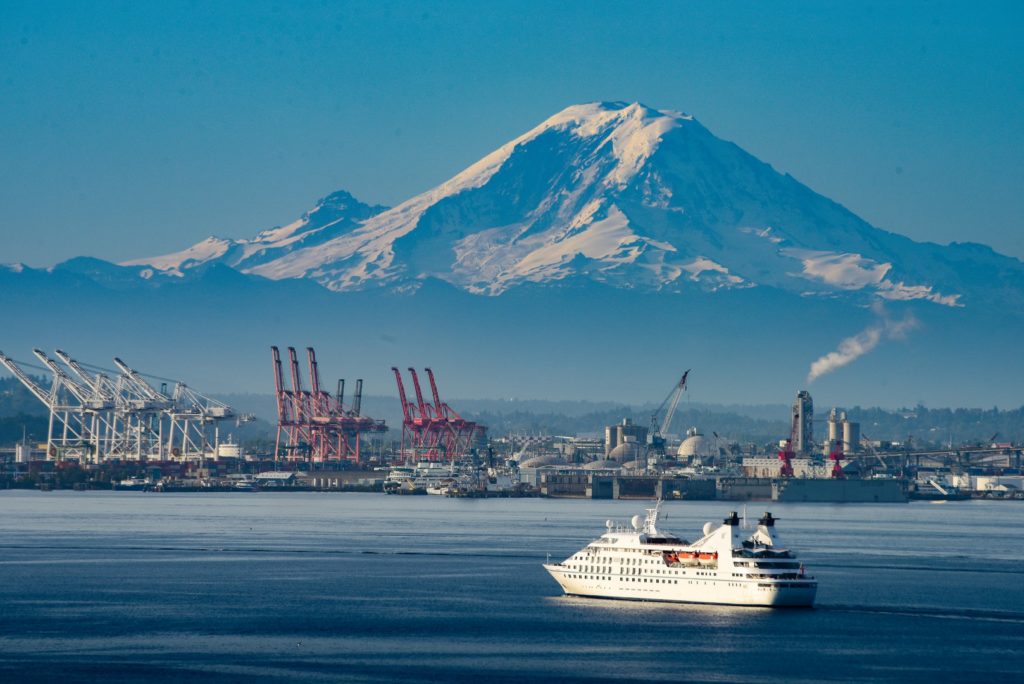 Of course, for those aboard the Star Legend, it’s easy to see the celebratory nature of the day. But this was a happening event for Seattleites as well. Newscasters were talking about it from the television in my hotel breakfast room and local radio station announcers were providing details as I drove to Pier 66 for the ship boarding.

The one-time event was made possible because the company’s new Alaskan cruises brought the Star Legend relatively close to the company’s downtown home office. Take a look!

Leaving the Port of Seattle’s Pier 66, we set off after the Star Legend’s traditional flag-raising to Vangelis’ “1492” theme song. The ship’s Godmother, Gloria Bohan, was aboard to do the honors. 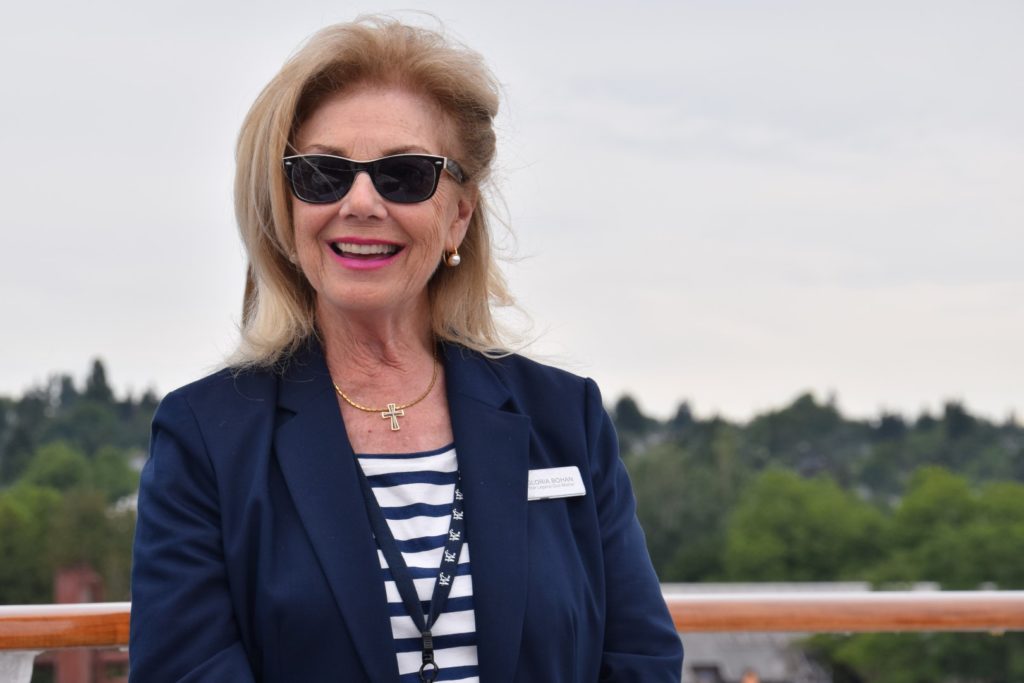 The ship provided fresh views of the city’s skyline on Elliot Bay. Those of us on board explored the ship or found cozy places to settle in and sit back, watch the city go by and look out on Puget Sound. We passed Olympic Sculpture Park and Centennial Park and the Queen Anne neighborhoods. We rounded the curve of 534-acre Discovery Park, passing West Point Lighthouse, and entered Shilshole Bay. A kayaker paddled close to the ship and waved to us, as did those from waterfront home decks. 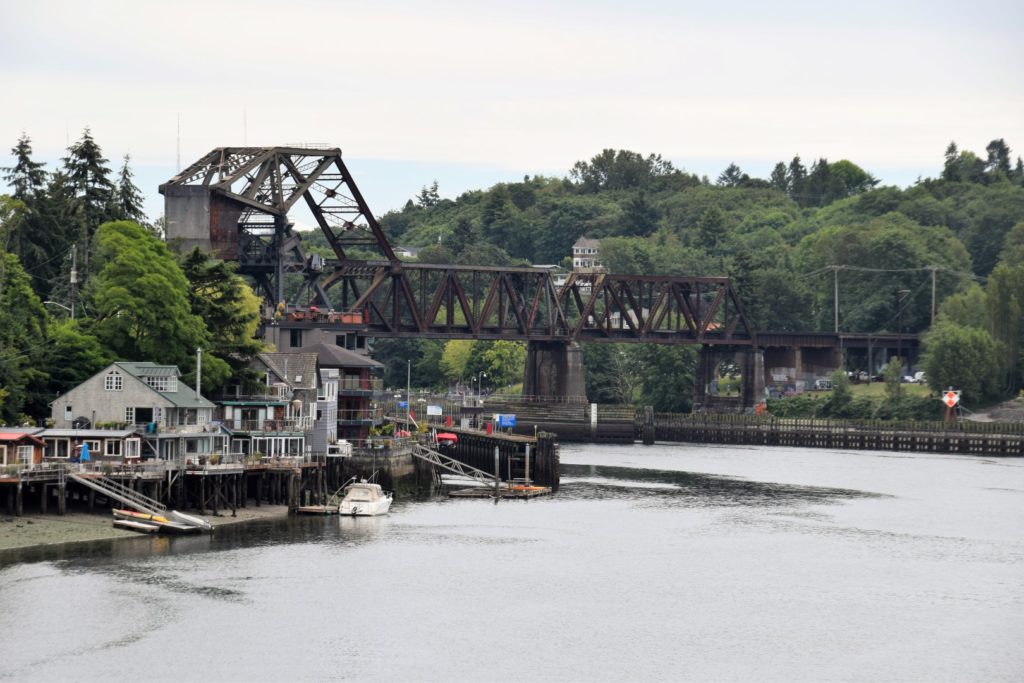 The Ballard Locks came into view. Excitement grew. The path through the Locks did indeed look narrow given our size. 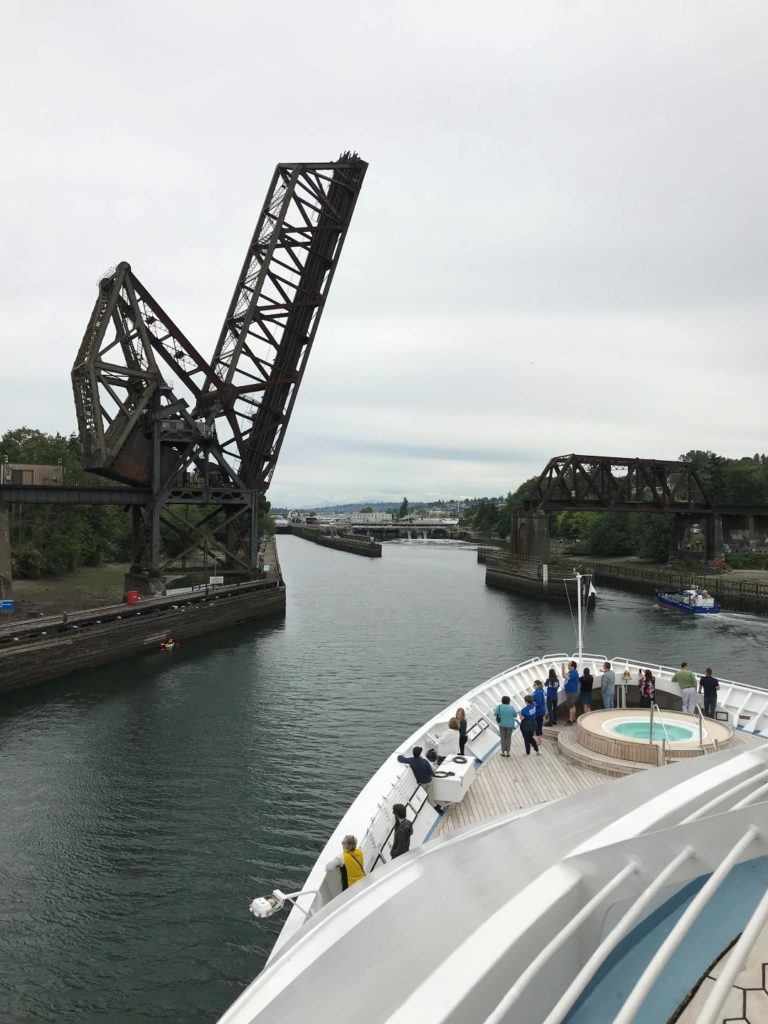 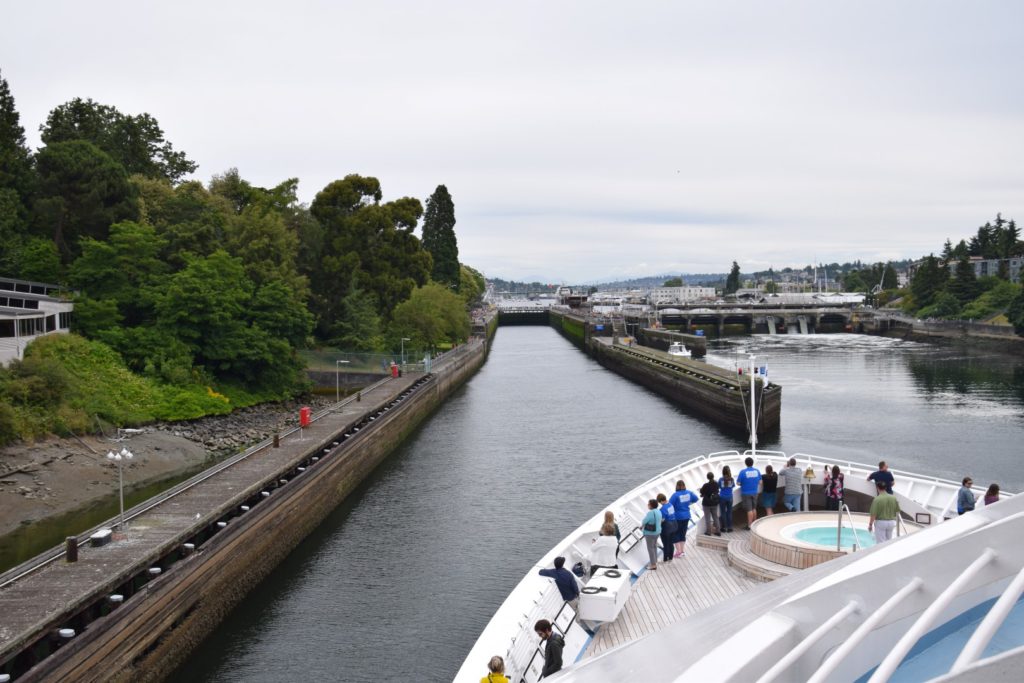 I really enjoyed seeing the crowds of people standing along the Botanical Gardens. Families picnicked on the lawn, and hundreds of people stood along the water, waving and taking photos. Televisions stations and tour and recreational boats were on hand to watch us. Helicopters circled overhead.

Captain Ned Tutton and his crew navigated the narrow waterway. We looked overboard watching the distance between the edge of the ship and land narrow. 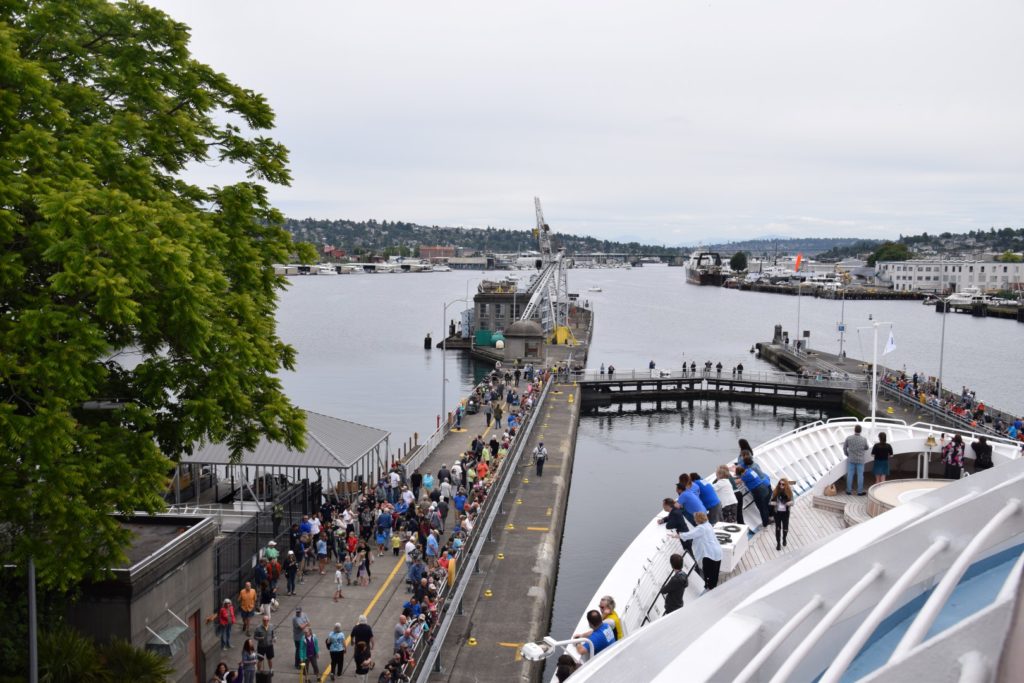 You have to admire the engineering of this feat. We were aboard a 63-foot wide and 440-foot-long ship, capable of maneuvering through the locks with only 12 feet to spare. The Ballard Locks, more correctly named the Hiram M. Chittenden Locks, allow ships to pass through the approximately 20-foot difference in water level between Lake Washington and Lake Union. The Locks are also engineered to do this while keeping the saltwater of the sea out of the freshwater lake.

We were inside. The water levels rose to meet the level of the freshwater lake. Now, that’s worth a champagne toast. 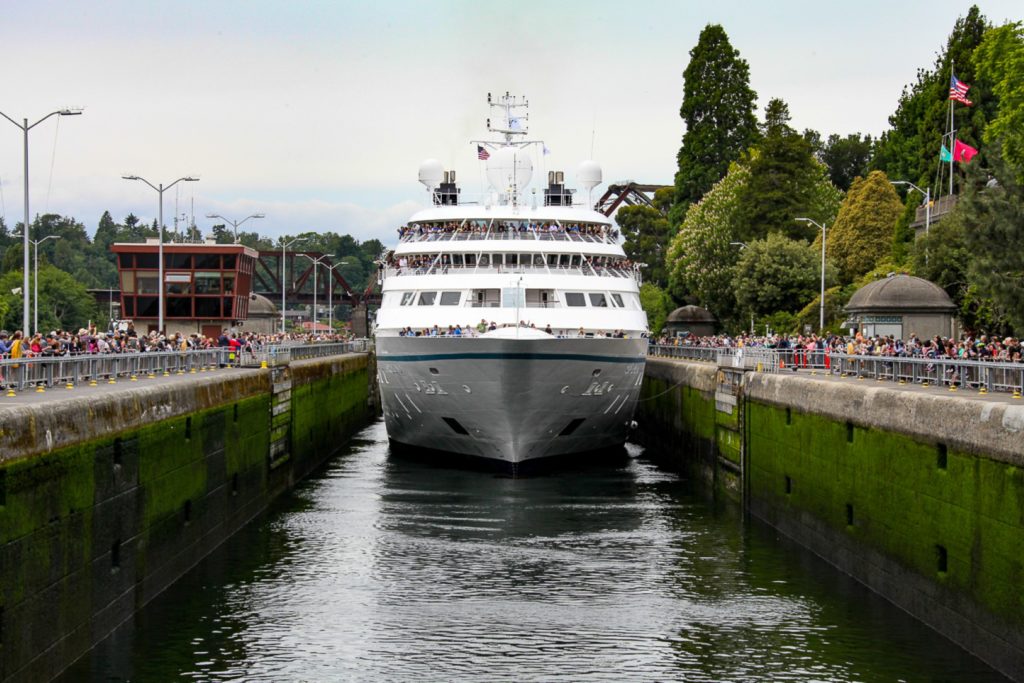 In the Ballard Locks (Photo courtesy of Windstar Cruises)

The gates of the Locks opened and we carefully passed through into Lake Washington’s Ship Canal.

Our excitement didn’t die down. We were the largest ship in the canal and on the lake by far. Celebration ensued with food and drink. We chatted with more of the ship’s staff and employees and we got to hear from Windstar Cruises President John Delaney, others closely associated with the ship and the company, and the Star Legend’s international crew. 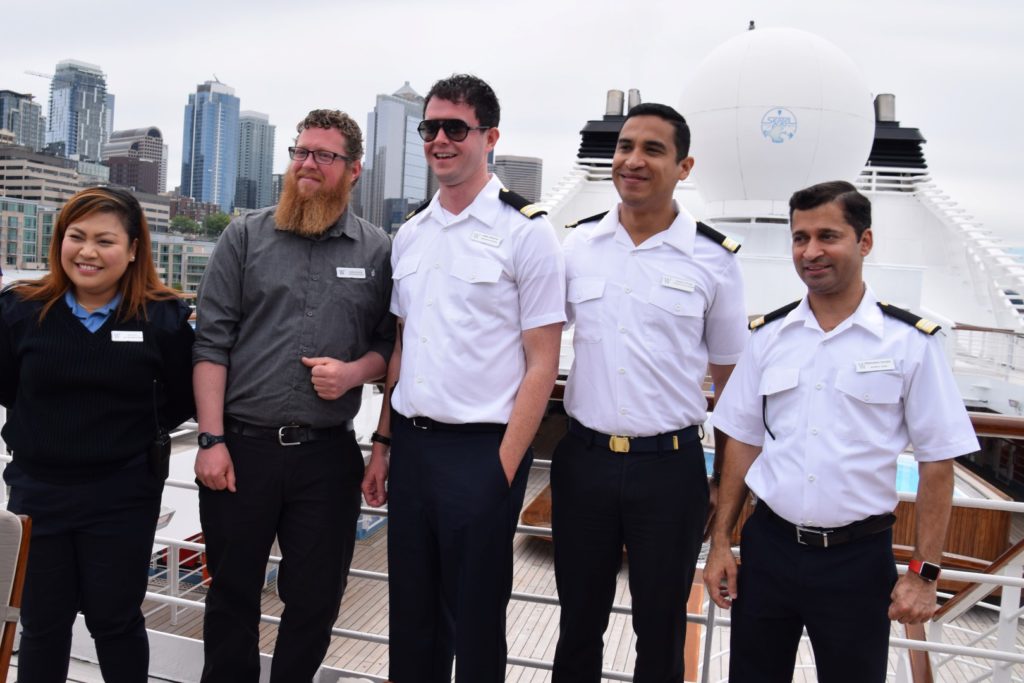 Being on Lake Union was a real treat. 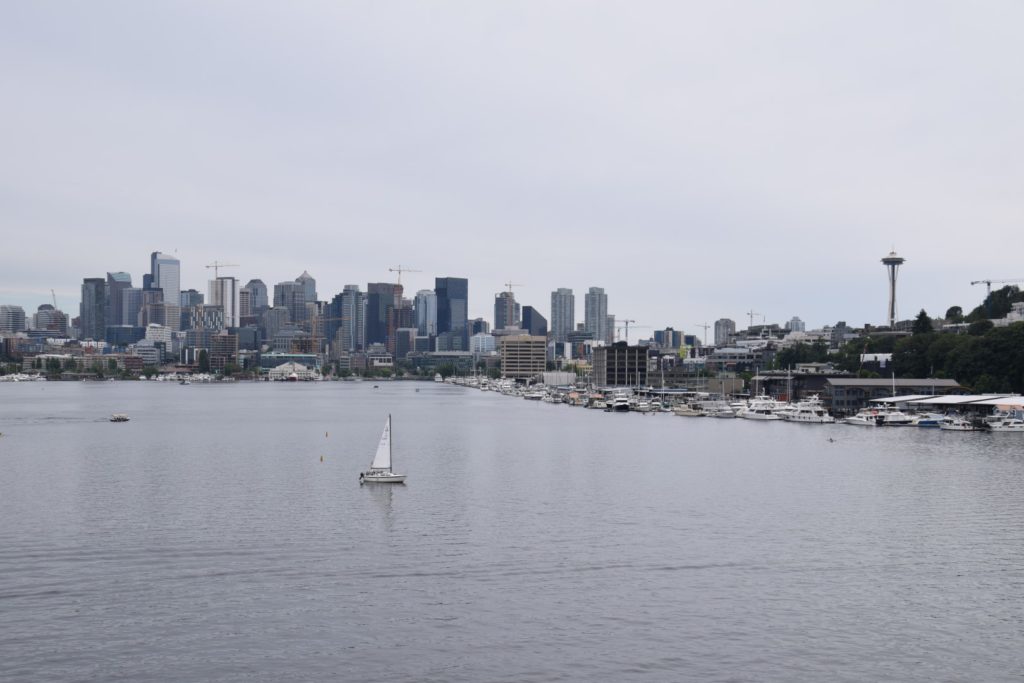 Once in Lake Union, we enjoyed a little ceremony to christen the new fleet of six rugged inflatable Zodiacs, and were treated to rides around the ship. 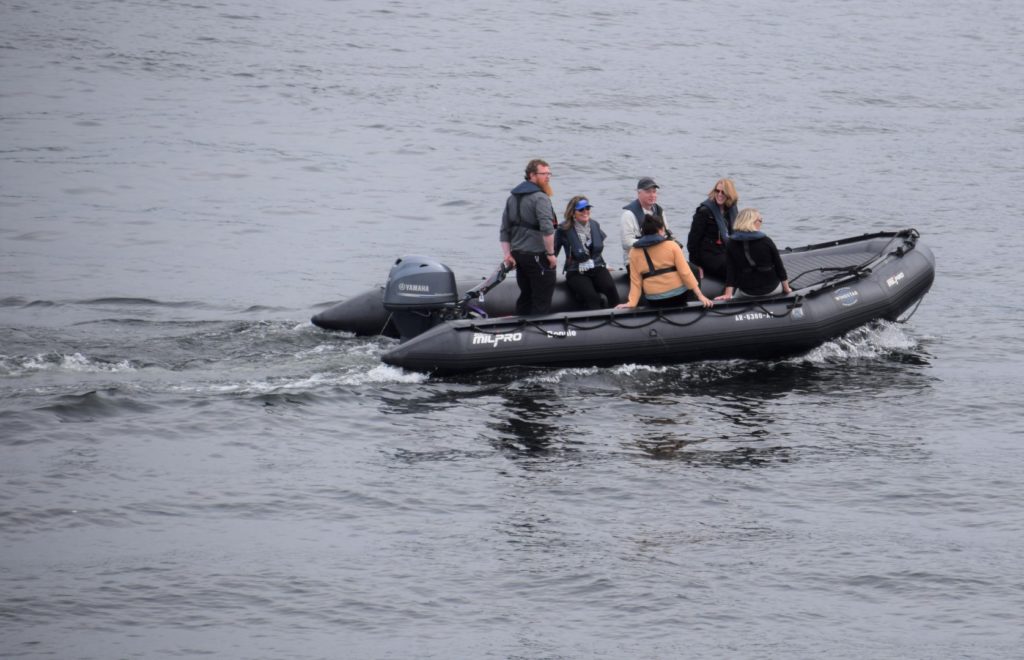 The ship’s new Zodiacs will take guests out on the Alaskan waters. (Photo Nancy Zaffaro)

President John Delaney was pleased with the event. He told me, “This is just a fabulous chance to celebrate. I knew it was going to be good, but it’s even better than expected. This has turned out to be more than just a celebration for our employees, giving everyone a chance to get out of the office and be together on one of our ships. Having the Star Legend in the Port of Seattle right by our offices and through the Ballard Locks extended our celebration to all of Seattle.” 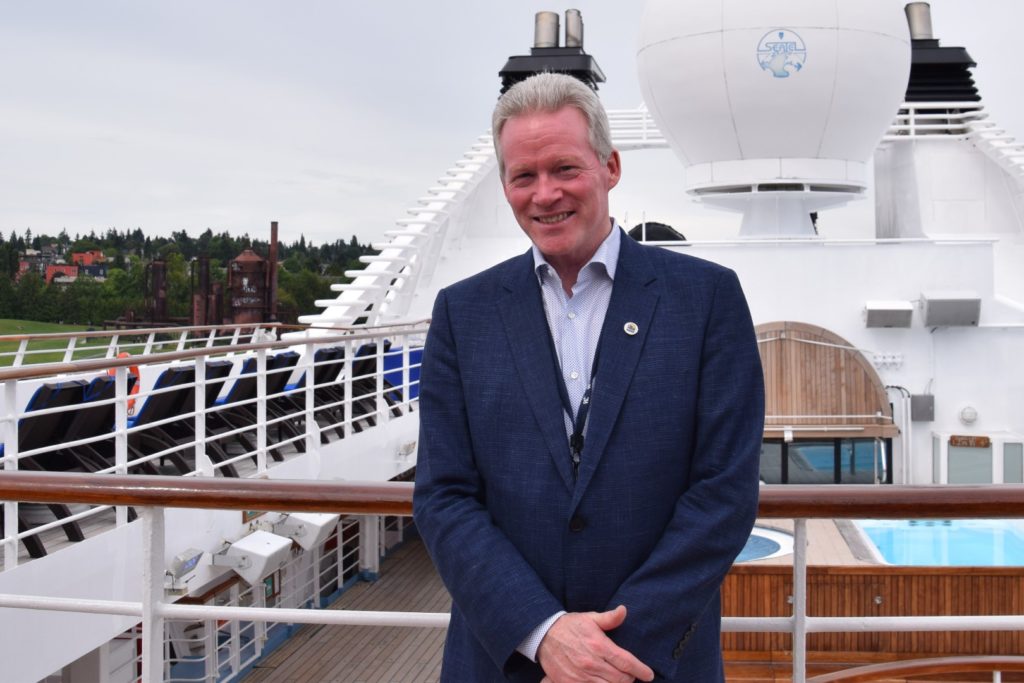 Our cruise was also a great chance to tour one of Windstar Cruises’ ships and get a feel for what cruising with the company. The verdict? Sign me up!

Boarding the six-guest-deck ship reveals an open two story deck that feels expansive and yet cozy.  There are two hot tubs and an counter-current pool. 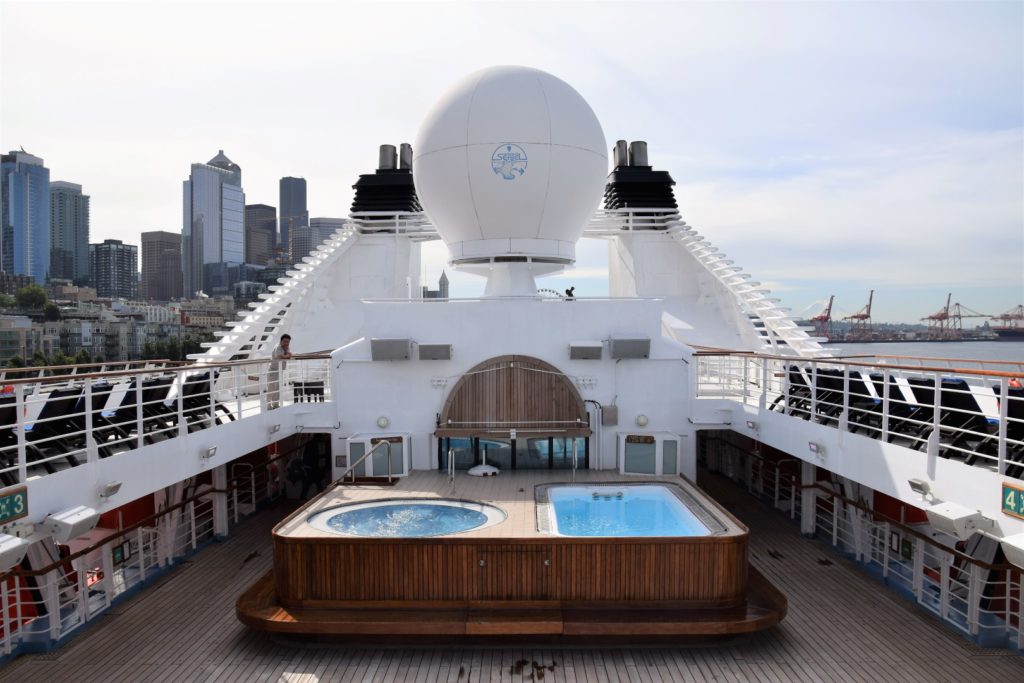 The ship has a capacity of 212 guests and 153 international staff. There are 106 ocean-view suites, 64 ocean-view suites with large picture windows, 36 French-style balcony suites, and 6 suites with private verandas, including the two top-of-the-top “Owner Suites.” The suites range in size from 277 square feet to 575 square feet. 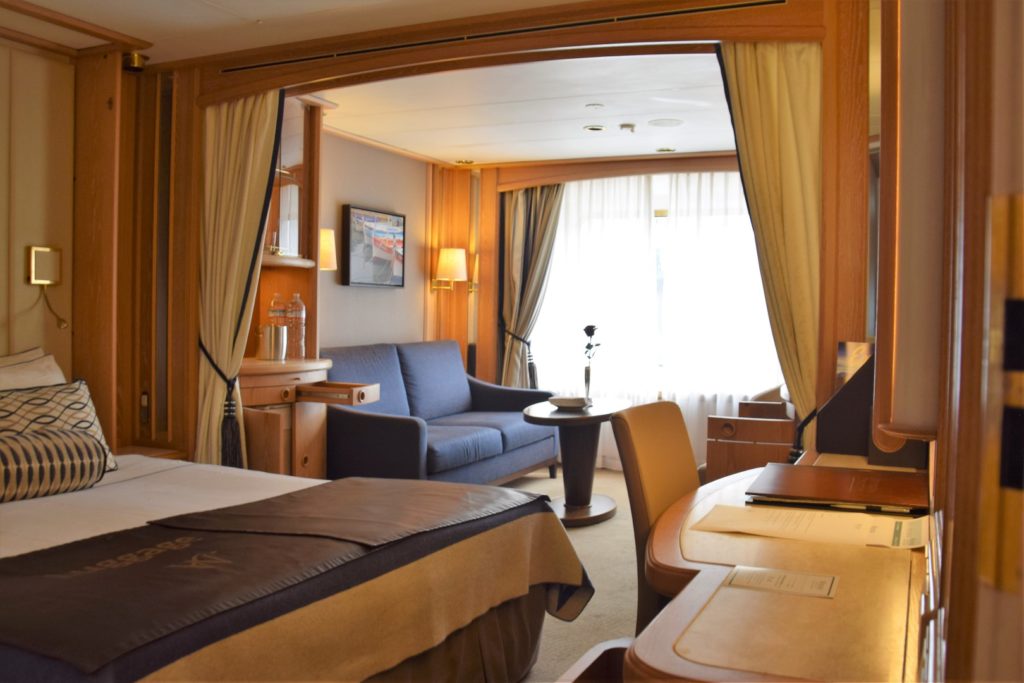 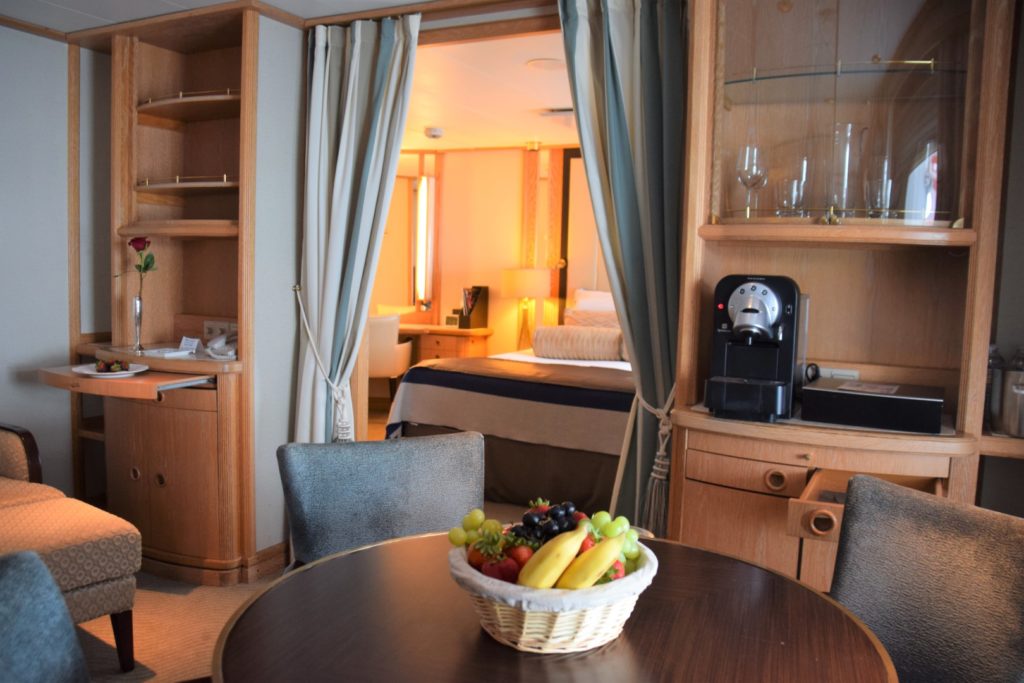 I was surprised by the roominess of each cabin and how comfortably outfitted they were, across the board. Guests enjoy features like walk-in closets, bright marble bathrooms, lots of storage space, large televisions, comfortable seating, and luxurious bedding. Most cabins have shower-tub combos. The entire ship has a comfortable, laid-back, but stylish and sophisticated vibe. 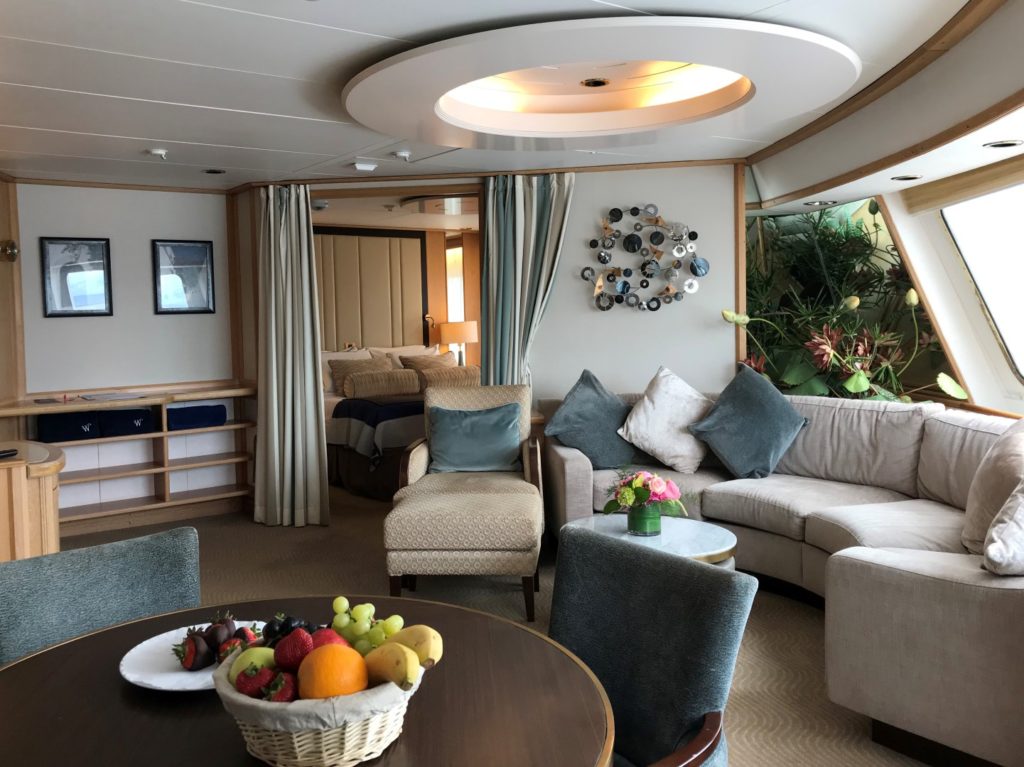 There are plenty of comfy cozy public spaces for relaxing and socializing. 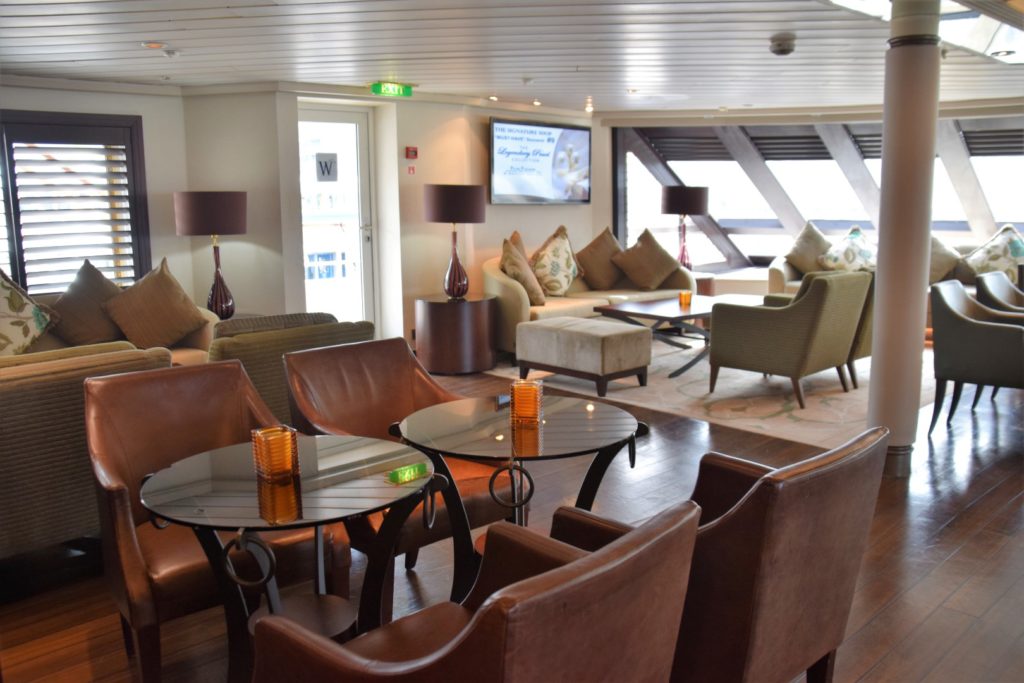 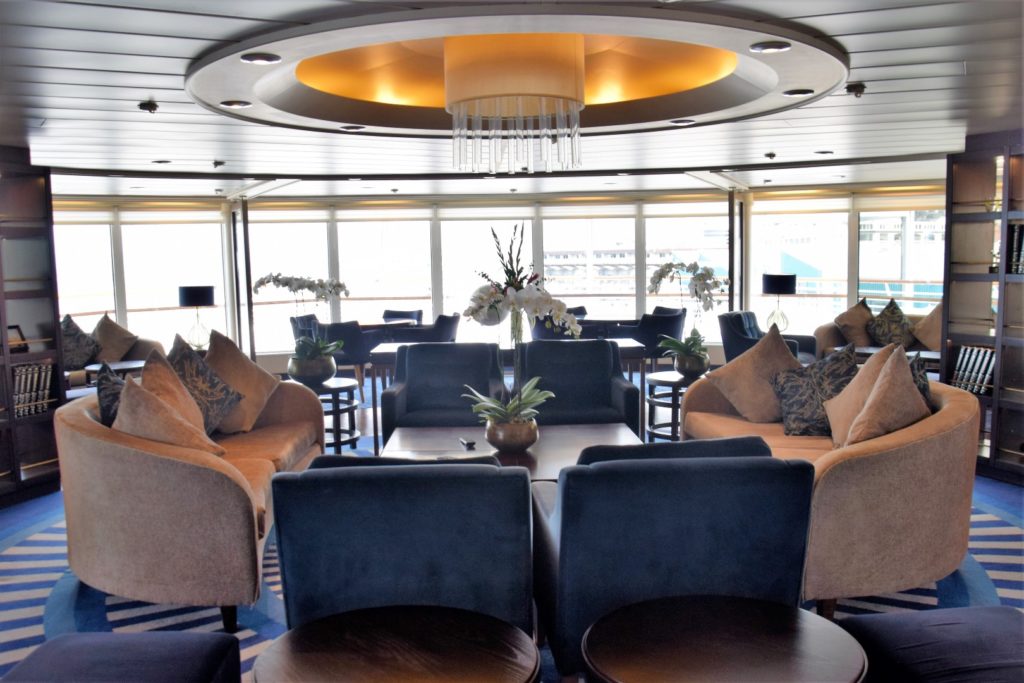 Windstar is reportedly one of the few cruise lines with a liberal open-bridge policy. Unless there’s rough-weather or the crew is exiting and entering ports, you’re pretty much welcome to stop in for a visit.

Getting a Taste of Cruising with Windstar Cruises

Dining aboard the Star Legend is a pleasure. There’s a choice of the elegant Amphora Restaurant formal dining room, and indoor as well, as two outdoor casual dining rooms. 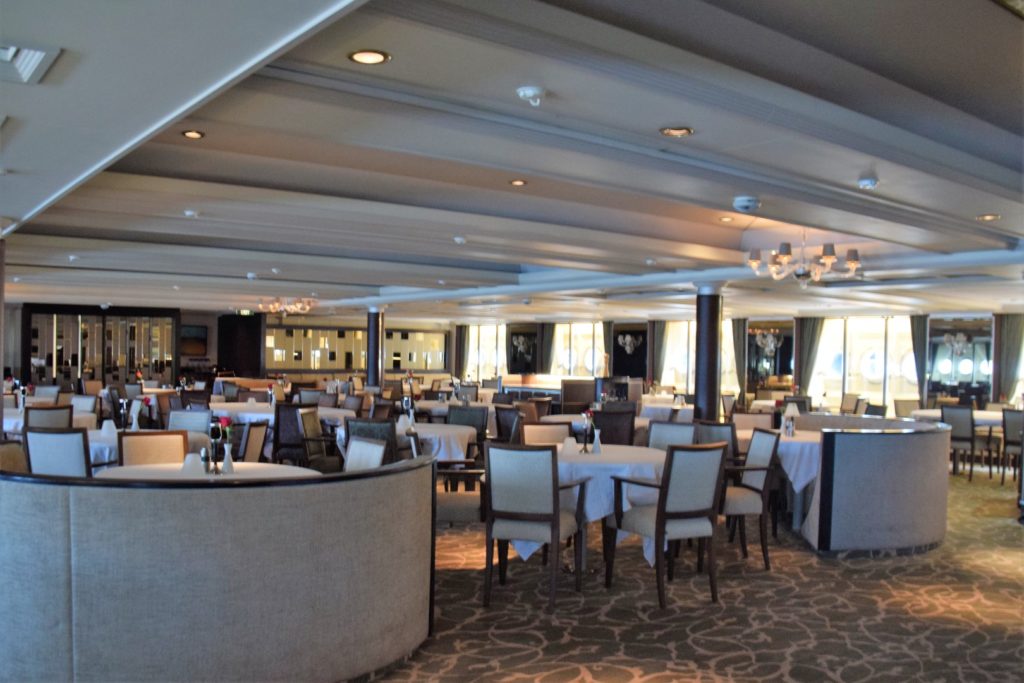 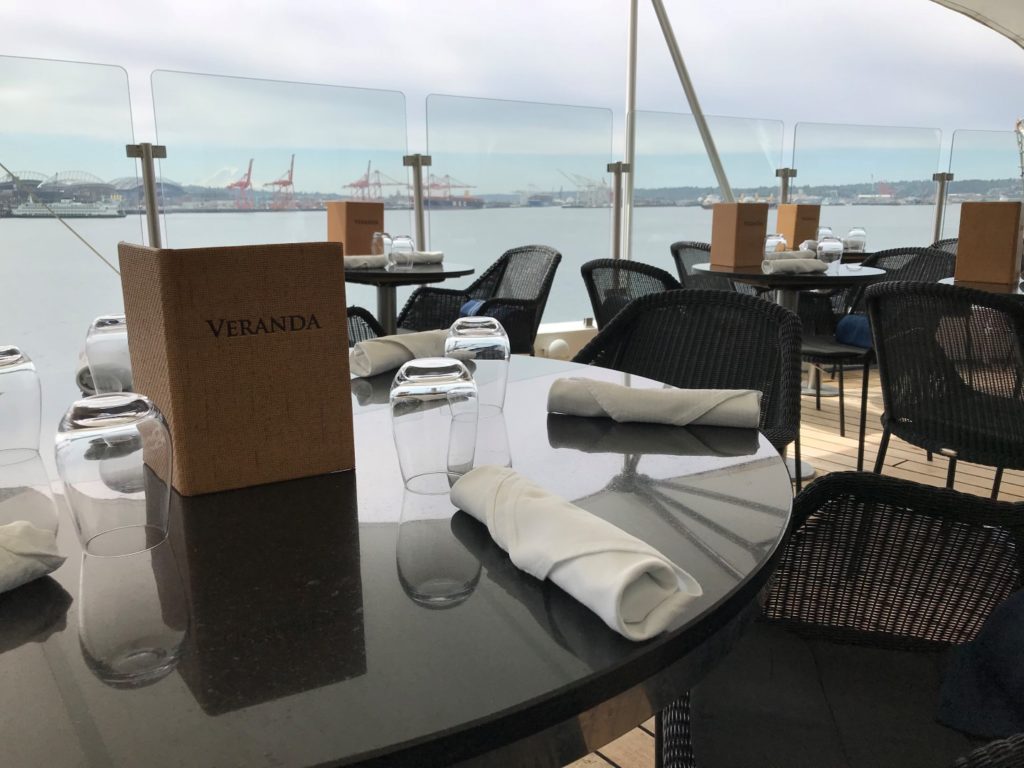 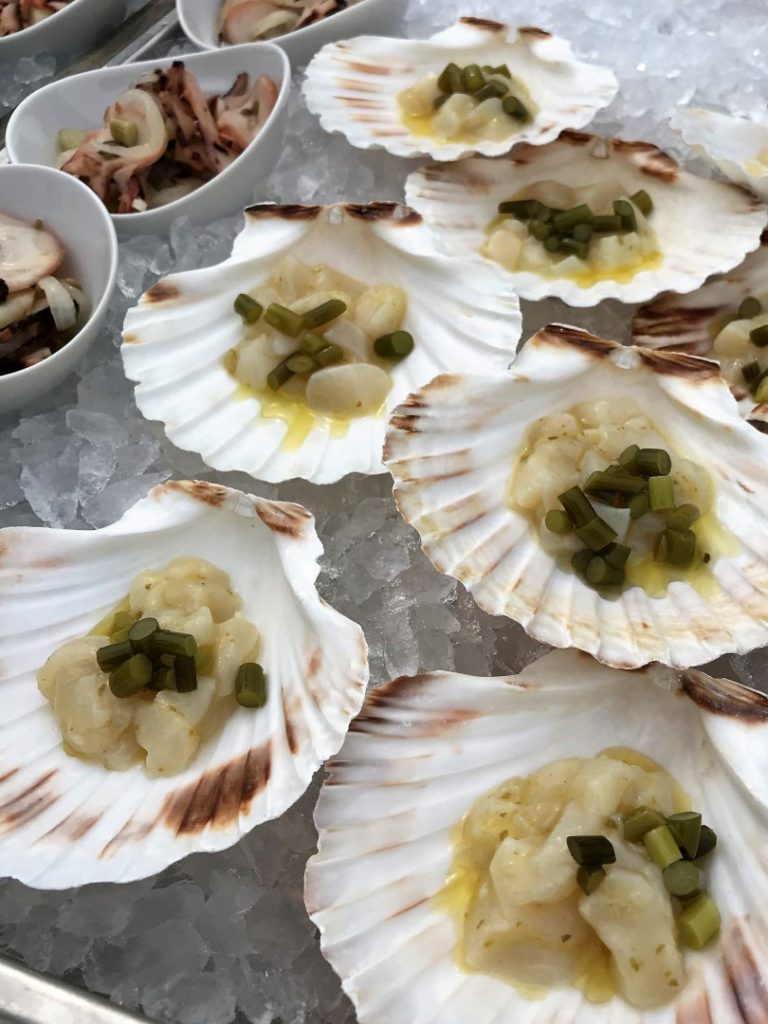 On our day cruise, we enjoyed an Alaskan poached sockeye salmon carving station at a lovely buffet spread and a full luncheon menu option. Windstar Cruises is the official cruise line of the James Beard Foundation, and we were joined on this day with James Beard Chef Renee Erickson, owner of Seattle’s The Walrus and the Carpenter and other popular Seattle spots, as well as a bestselling cookbook. 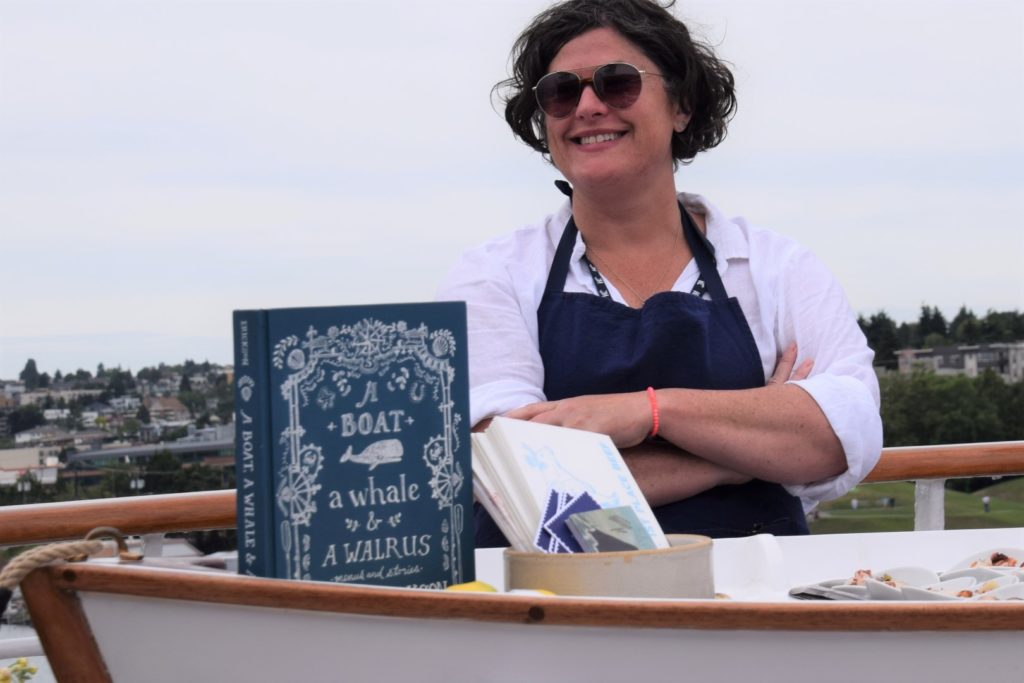 Windstar Cruises began as a three-ship fleet in 1986. In 2001, Xanterra Parks and Resorts purchased the cruise line, allowing the company to increase its number of ships and its itineraries. 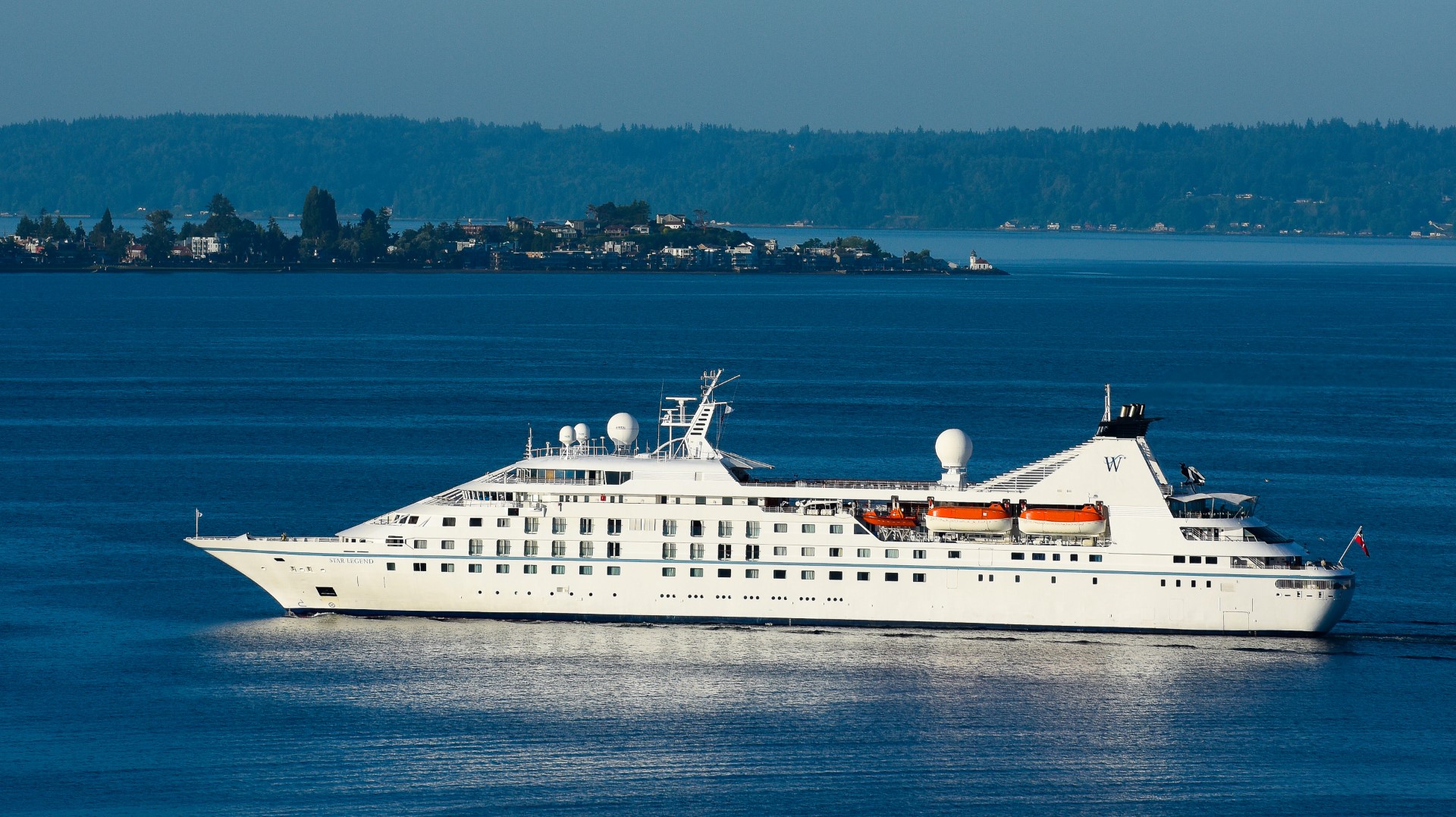 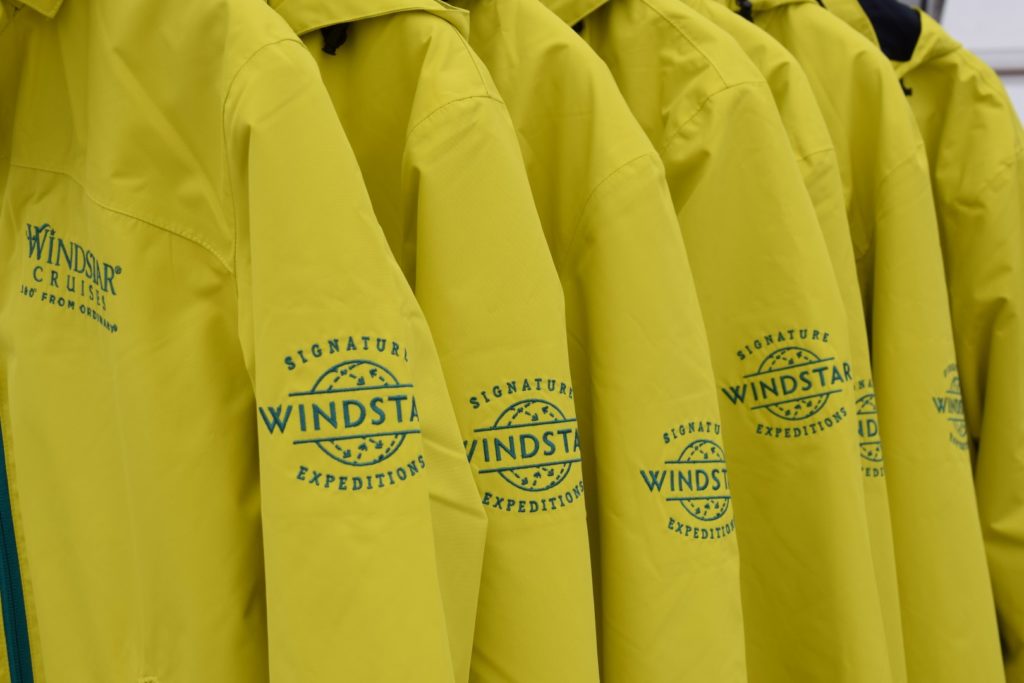 While the Star Legend and other Windstar Cruises ships spell comfort-luxury all around, this is a line in which you’ll enjoy selecting your cruise based primarily on the port calls you’ll make. The smaller ship size mean port calls in smaller cities and through inland waterways other cruises can’t take you to. The company concentrates on cruises that really get you off the ship and exploring the locale, cuisine and culture. The many shore excursions and time spend docked turns your trip into a true destination-focused trip. A look at the Windstar Cruises 2018-2019 catalog is a glossy wish-list of adventure and learning experiences, with cruises that can take you to some 80 countries.

“180° from Ordinary” is Windstar Cruises’ brilliant tagline. It’s an apt nudge toward the panoramic views you’ll enjoy from their cruises regardless of where you may travel.  And to think that you just have to waltz over to the other side of the ship to see the other 180° makes a cruise with Windstar Cruises all the more appealing. 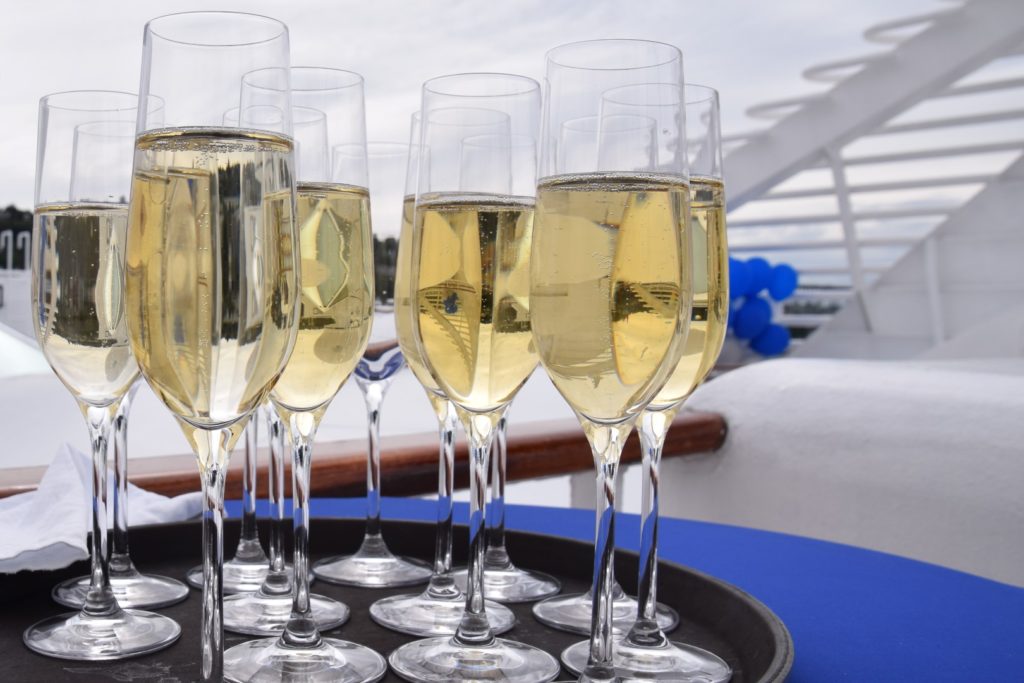 -All photos by Nancy Zaffaro, except as credited. Cover photo courtesy of Windstar Cruises.

So look who got a new grand dog? First time runnin

So look who got a new grand dog from #1 daughter?

Tree. Hedges. Lawn. Grape vines. And just a few of

The revolution has many lanes. . . #blacklivesmatt

Day 4 from my little FB travel photo sharing and I

A few more from Long Beach Peninsula, one of my fa

Day 2 of sharing photos of places that mean someth

It’s time to share some travel photos of trips p

Mother’s Day #champagne out on the deck. A big s

A little Mother’s Day #champagne out on the deck

Fort Vancouver #walk ...just feels great to be out