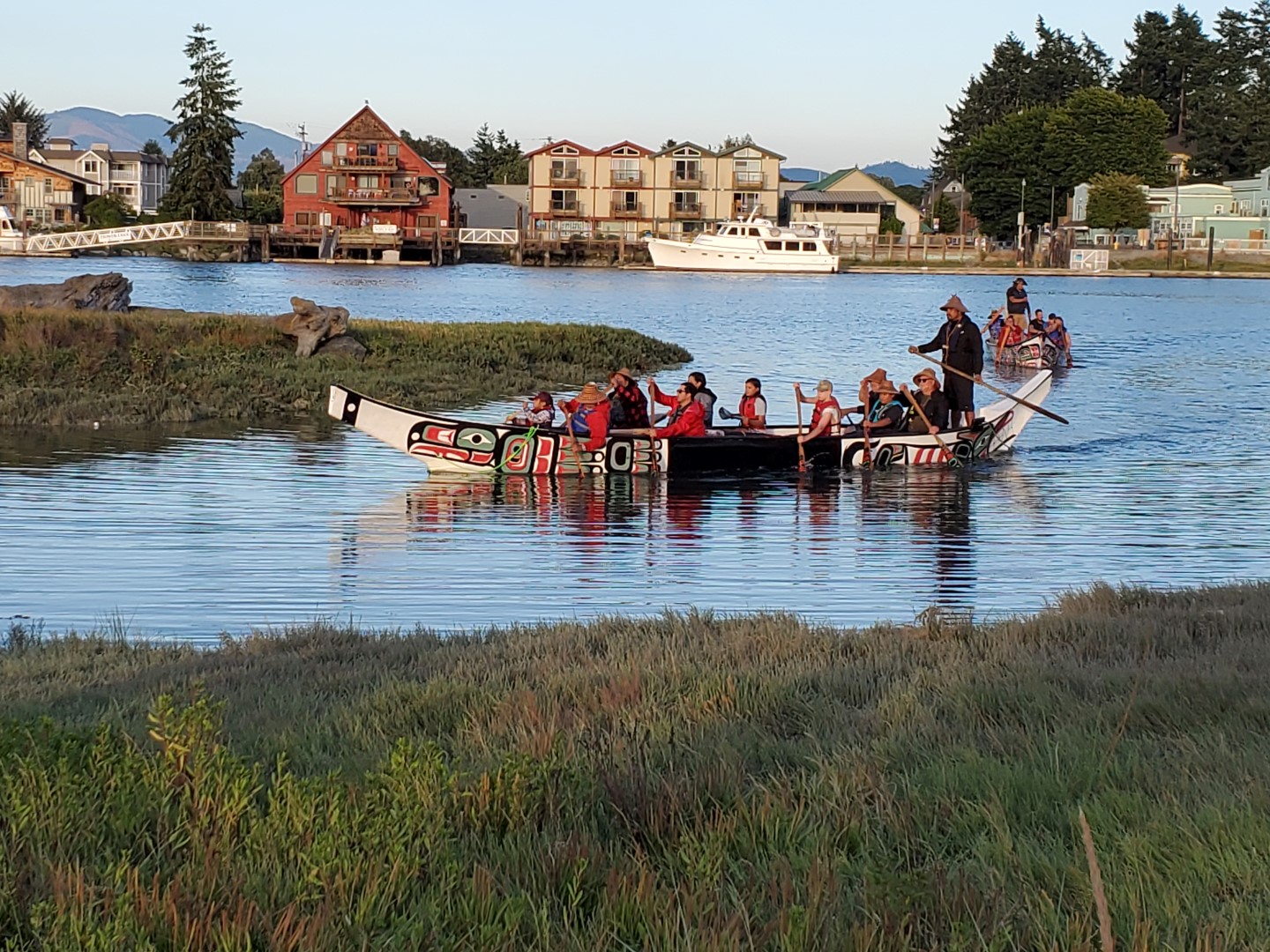 It is dawn. There is a slight mist rising off the waters of the bay as the pink tinge of the morning sun colors the sky. The pullers and paddlers gather round their canoes lined up along the sandy shore, paddles in hand. One last check of provisions. One more look at today’s route. This is the annual tribal Canoe Journey celebrating the Coast Salish people, their traditions, and travel by these ancestral waterways.

This year’s gathering was to the Lummi Nation, just north of Bellingham, Washington. 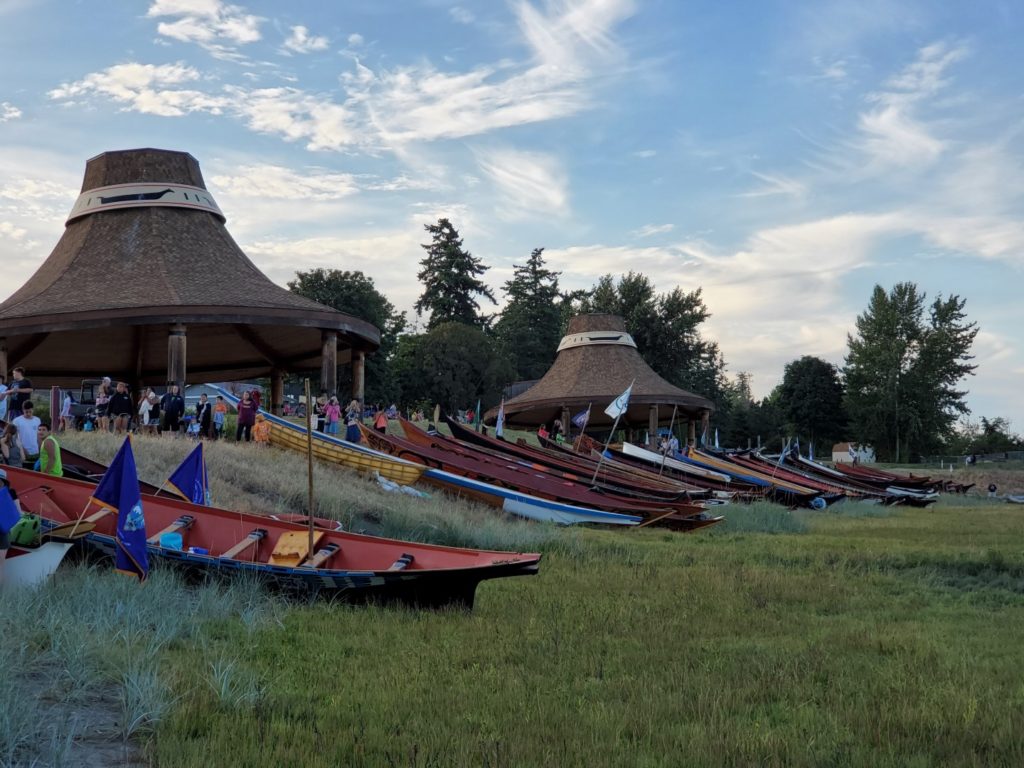 One of the rest points; at Swinomish Nation (Photo by MaryRose Denton)

It will be what is known as an eleven-hour pull meaning, these paddlers will be traveling on the water for a full day before reaching their destination.

One more leg enroute to this year’s final destination and potlatch on Lummi Nation land. They will be sitting for most of the day, inside these ocean-going canoes, primarily of carved cedar logs. Each one holds a dozen or more members referred to as canoe families. They work together reaching forward and back, pulling their paddles through the water.

As they step onto the beach, each one slips into the footsteps of their ancestors who canoed these waterways for generations. It is a privilege to be here. It is an honor to be carrying on this cultural tradition. 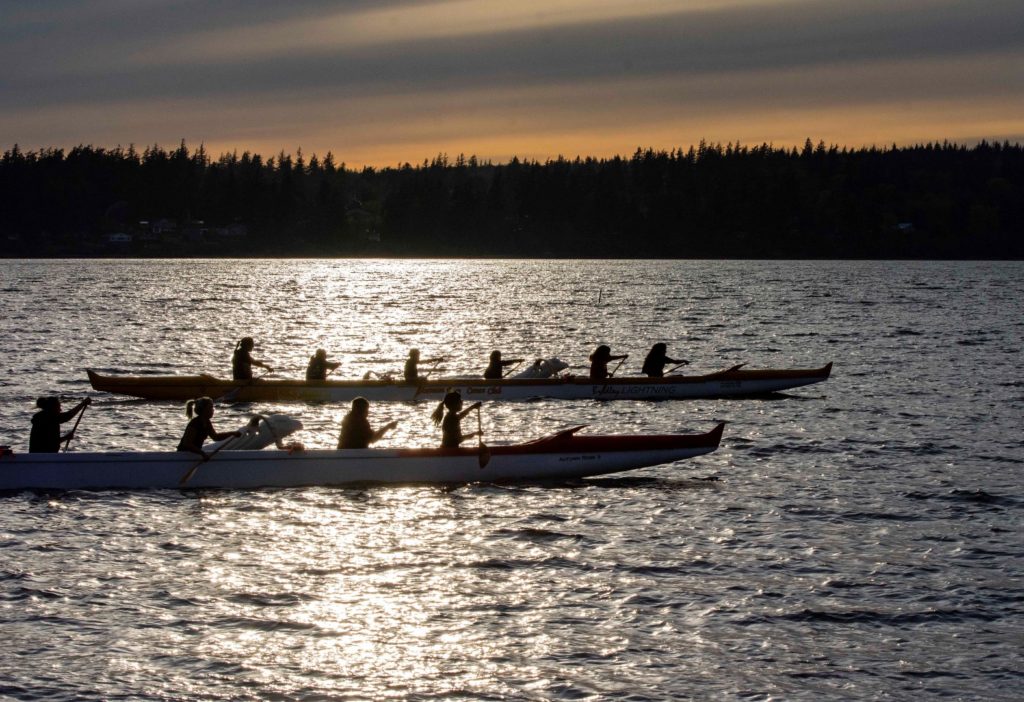 Preparation and Tradition Are Key

There is great preparation which goes into the journey; with great accomplishment at its end. Some canoe families begin training months in advance, but it is truly about being on the journey itself. Much like an anecdote for the journey we are all on, the one called life. Each canoer learns to be prepared, to be present, and to rely on each other for help as well as strength.  It is a place of healing, learning about connection to the past as well as helping shape the future.

The 2020 Tribal Canoe Journey will be to Nanaimo, British Columbia, Canada.

There are certain canoe rules passed down alongside the traditions of songs and stories. Every member of the canoe family must be substance free. This demonstrates respect for oneself as well as for the other family members. It is said, respect and trust cannot exist in anger so therefore has no place inside the canoe.

Much like the road of life, the only thing to do is to keep moving forward.  With each pull, the canoe is propelled forward, one stroke closer to its destination. Growing in numbers as they travel the western coastal waterways, the canoes converge at this year’s destination, the Lummi Nation. Washington. Paddle to Lummi was underway.

Bringing Together The Coastal Salish Tribes

Each year since 1989 during Washington State’s centennial celebration, the tribal canoe journey has brought together tribes from up and down the Washington and Oregon coast, British Columbia and Alaska to meet and exchange songs, stories, and dance in a traditional potlatch. The several-day event is hosted by different Native Nations each year.

The canoe journey is a revival of the traditional method of travel for the coastal people and is culturally significant for all the participants. Upon arrival at their destination, visiting canoe families request permission to come ashore, often speaking in their own native tongue.  With Paddles Up, they signify this request comes in peace. What follows in the multi-day potlatch is termed the Protocol- with each tribe taking to the longhouse floor to share the stories of their people, their song and dances. 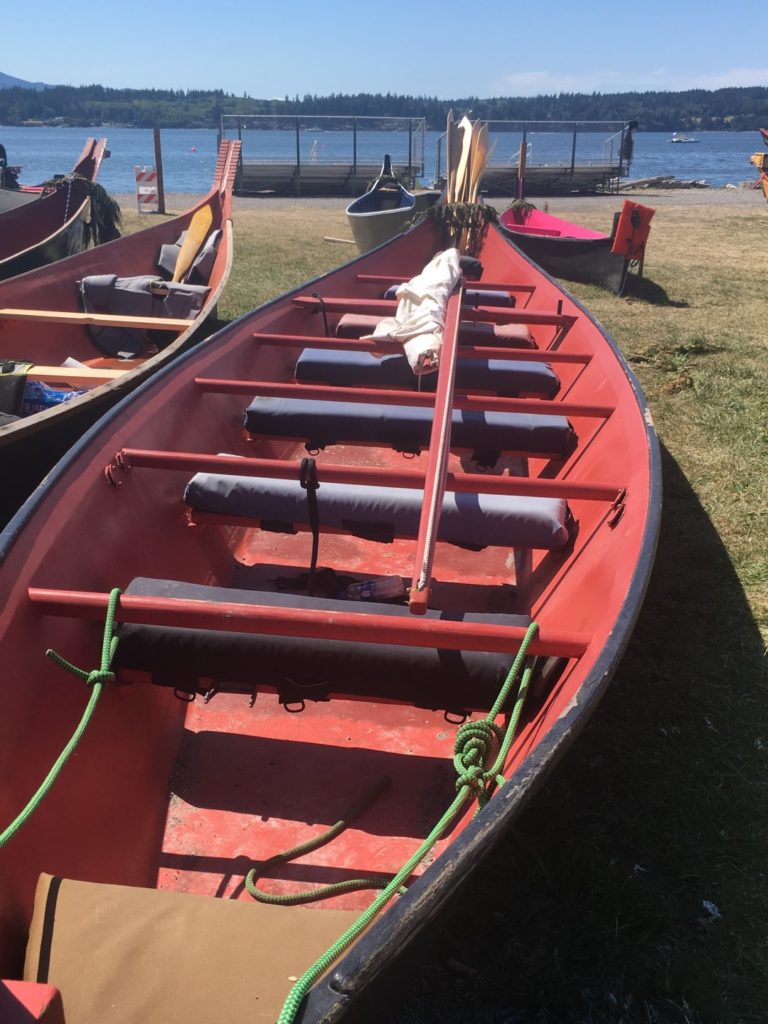 Over a hundred canoes made the journey to Lummi, a record number increased from last year’s Paddle to Puyallup. A testimony to the growing solidarity of tribes as they strengthen their connection to the Salish Sea.  There are many tribes participating in this year’s journey, all different with different languages, customs, and ceremonies.  The potlatch gathering celebrates this diversity at the same time it brings connection. It is this connection to ones roots which seems vital in combating addictions and suicide in the younger generation.  It is a harbinger for purpose and meaning. “The canoe journey honors and connects us to the land, the water, and to each other,” said Freddie lane, public relations director for the Lummi Nation. “We are all different with different stories. Yet we come together as one coastal people.”

A Gathering of Tribes: Potlatch, Music, Stories, and Community

It is a time for cultural exchange and sharing in friendship.  For some it means catching up with old friends, for others it means making new acquaintances.

“It is the return of the potlatch,” Freddie Lane explained, referring to the custom of gathering tribal nations, a custom that had been banned at the turn of the last century. “Now it has come full circle. This is who we are. This is how we tell our story”.

The sun sets on the last day of the potlatch.  The glimmer of it’s rays dancing on the water resembling a traditional Haida painting. A soft, low song can be heard from uphill in the longhouse.  A rhythmical chant sung to keep the paddles moving forward on the journey.  It is not about which destination is next but the awareness of the journey itself. The tonal sounds carry pride as well as hope. Pride in who they are and hope for the next generation to carry on their living heritage. 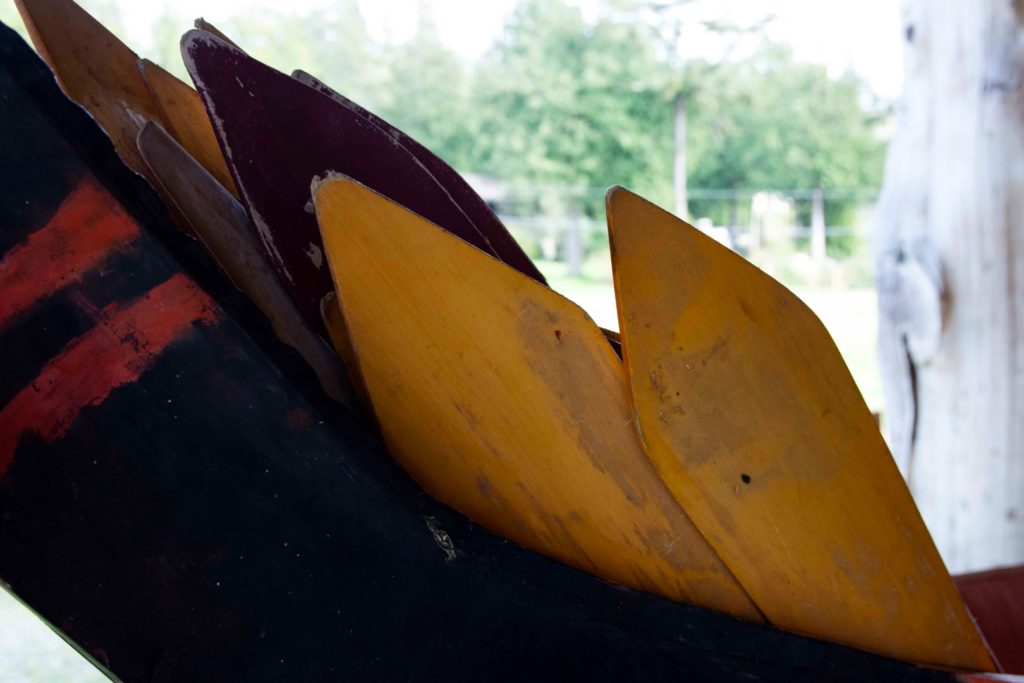 – All photos by MaryRose Denton. Cover photo shows one of the canoes arriving at Lummi Nation.

MaryRose Denton is a freelance writer, traveler, licensed massage therapist, yoga teacher, lifelong vegetarian, and most importantly a mother. She enjoys the mash up of these that life brings and writes about them with insight, humor, and wit. A native to the Pacific NW, MaryRose lived for a short duration in Canada before returning home to this richly beautiful area. She has traveled overseas, exploring and visiting friends in their native homes allowing herself a deeper and richer understanding of human nature. MaryRose writes the stories of the people and places she visits, hoping to expand her readers’ interest and touch their hearts. She is a current member of the International Travel Writers and Photographers Alliance, TravMedia, and local chapters of various writing groups. Her stories can be found at MaryRoseDentonWriter.com or follow her on Instagram and Facebook.