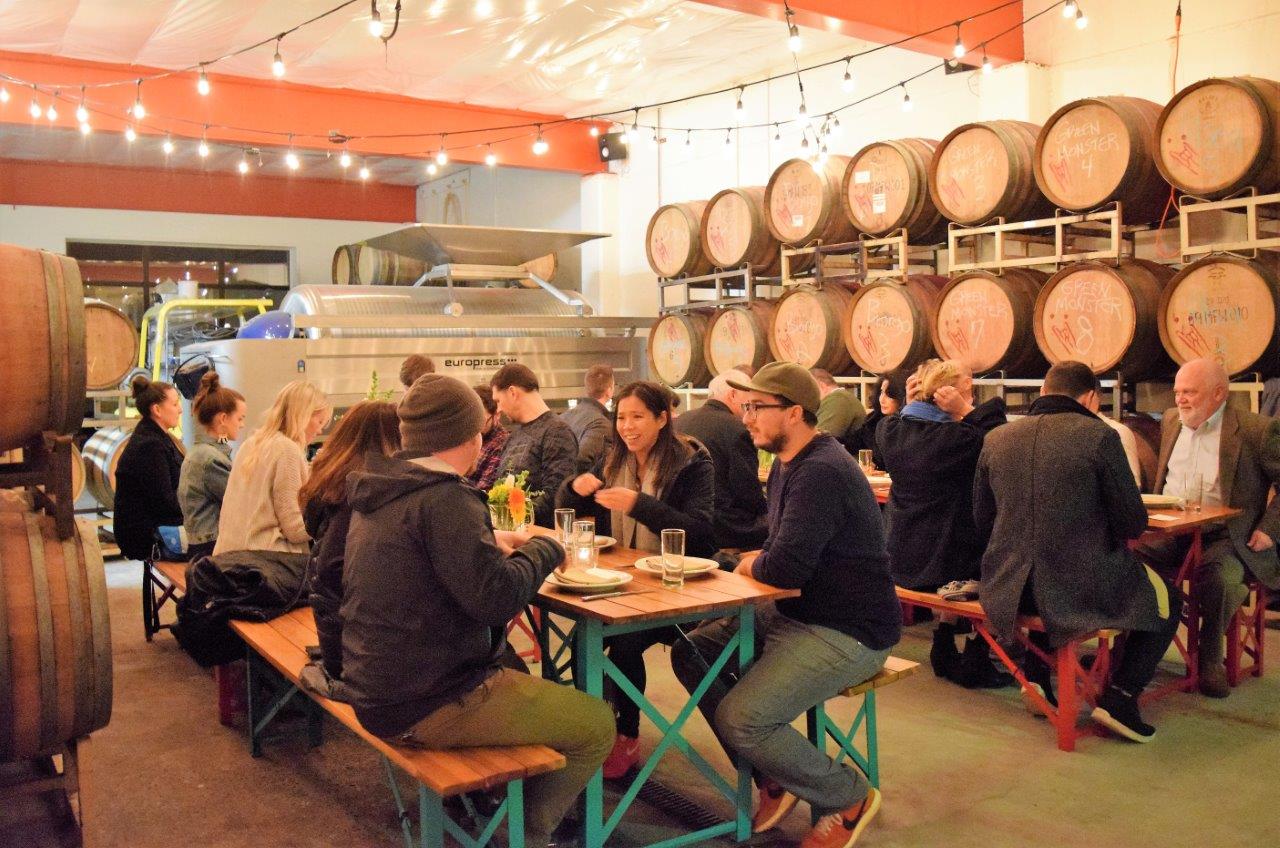 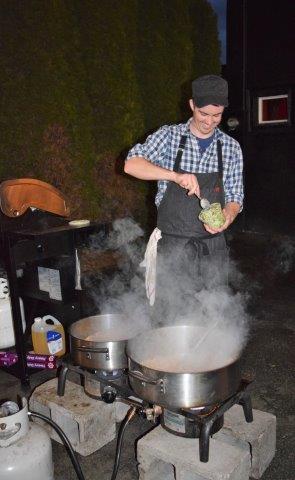 Gibson and his wife and partner, Stacey, a Sommelier, operate Parallel Food and Drink, a company offering pop-up dinners around the Portland Metro area.

Stacey says, “We frequently have to get creative with menu and execution based on what we have in whatever space we are using. But sometimes, figuring all of that out is pretty fun!”

Hosts Barnaby and Olga Tuttle, the winery’s owners, were ready for us. This may have been their first pop-up, but the two regularly host events at the winery, often with blaring rock and roll and an all-round party atmosphere that belies the sedentary wine gathering stereotype. Olga was placing fresh flowers on the table. Barnaby mingled with a guest who tried to tempt him with a quick spin in his 1988 Formula V6 Pontiac Fiero. 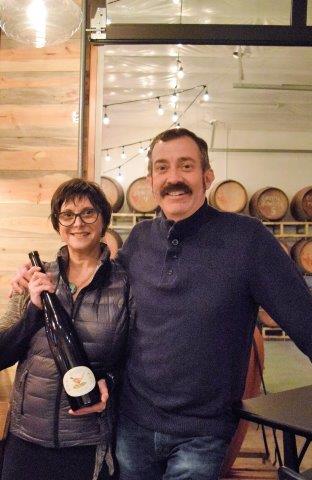 As it turned out, like this guest, Barnaby is a big car aficionado, and enjoys working on cars and even some racing. A connection was made and that’s the best of what pop-up dinners can do, in fact; bring people together. As was the case this evening, seating at these dinners is often at communal tables. Shared conversation and new connections can be a particularly fun ingredient.

Start with a Cocktail at Stone Barn Brandyworks 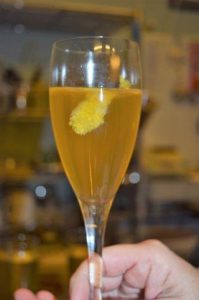 A cocktail at Stone Barn Brandyworks.

Our dinner included the option of kicking off with a cocktail around the block at Stone Barn Brandywork’s Tasting Room. Stone Barn Brandyworks is one of my favorite distilleries in Portland’s Distillery Row, and our group decided that was a good place to begin the evening. Some of us tasted their Straight Rye Whiskey (straight, of course) while others went for a mixed cocktail of Prosecco with their Golden Quince Liqueur (a bottle of which followed me home), a splash of cardamom simple syrup, and lemon garnish.

We were having such a good time, we found ourselves to be the deviant stragglers who had to be rounded up and encouraged (nicely) to meander around the corner for our dinner. 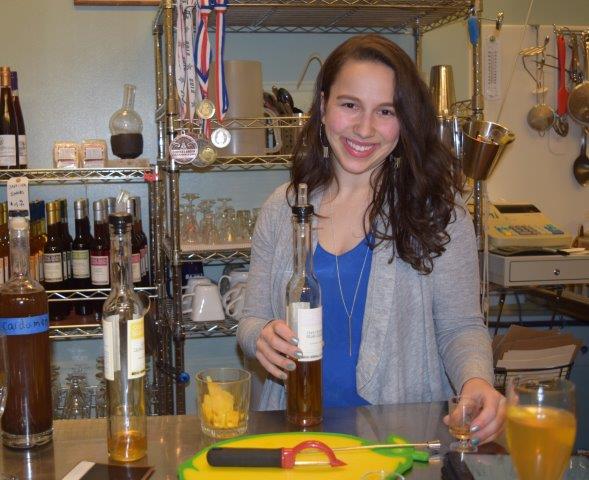 Stone Barn Brandyworks makes some the most innovative fresh fruit brandies and liqueurs.

Teutonic’s vibrant Tasting Room and adjoining winemaking warehouse space was a great, casual setting for our dinner. The tables were set nicely and we cozied up with the other diners. 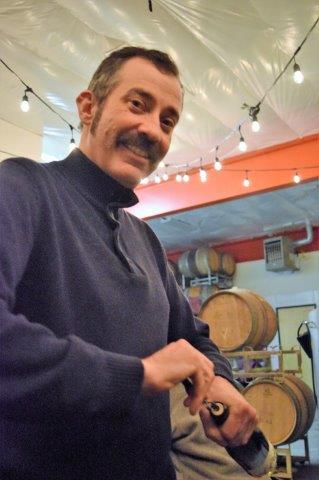 Olga and Barnaby were on hand to talk wine and offer wine selections for each course. (Pop-ups may or may or may not include alcoholic beverages in the price. Either way, they’ll have options available.) We ordered bottles from those recommended for each course. Teutonic crafts their wines especially for food, and worked with Parallel on each course, so it was a good opportunity to sample the wines.

Teutonic began in 2002. Barnaby was a wine buyer who developed a special affinity for wines from Germany’s Mosel region. He was called to learn to make wine and in 2005, Barnaby, Olga and friends planted 2,000 vines on fallow farmland in Alsea, Oregon. Their first commercial vintage was in 2008 and today they make a variety of well-received German-style wines. At the dinner, Barnaby related how they like to use old vines, cold climate, high elevation and wild yeasts, and sustainable farming techniques like “dry” farming that doesn’t require irrigation. Their wine making motto, if you will, is “Old & cold, high & dry, wood & wild.” 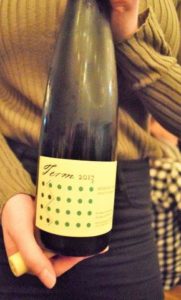 The first course, a salad of Cauliflower, Brown Butter and Grapefruit, was a delicious, if surprising combination of ingredients. We paired this with a bottle of Teutonic’s Term 2013 Riesling. The wine had vibrant flavors of melon and pear with a really prevalent grapefruit freshness that matched the tart-sweet grapefruit in the roasted salad. Very nice. (Get the recipe here.) 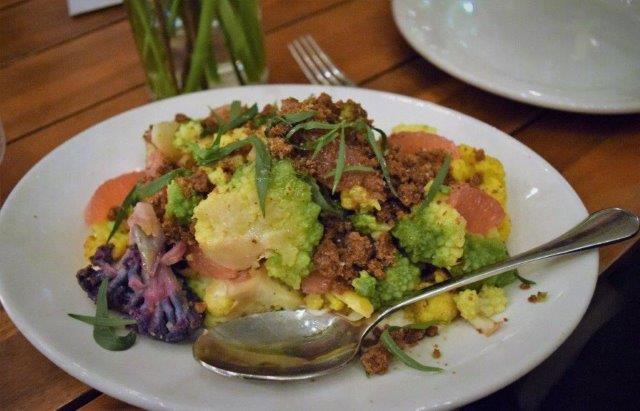 A salad of roasted cauliflower, brown butter and grapefruit gets some very special treatment.

Main course dishes arrived on communal platters. The Sauerbraten was simply the best I’ve had, and I’m a big fan of German food and of beef brisket. Oh-so-slowly cooked and with a deep-flavored gravy I could eat with almost anything. (Get the recipe here.) 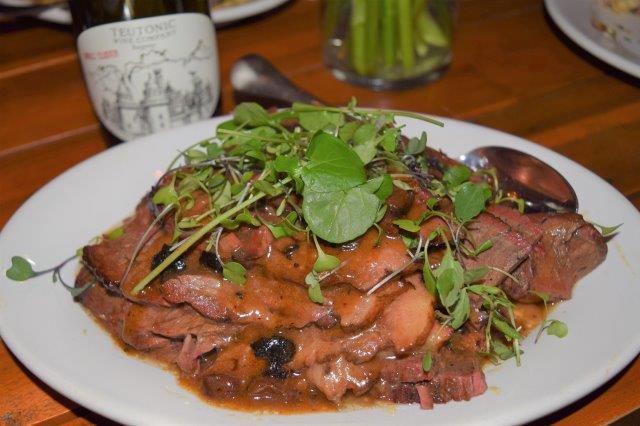 Chef Joey Gibson’s long-simmering sauerbraten was simply the best this writer has ever enjoyed.

Spätzle is a comfort food in which I could indulge for breakfast, lunch or dinner. This version was flavor-packed and perfectly cooked, with just the right buttery stir-frying. 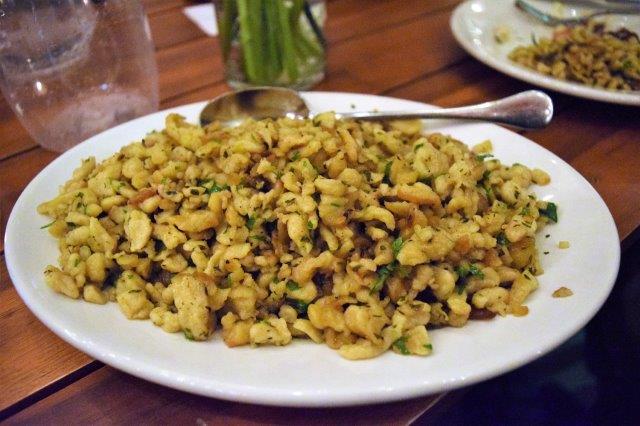 Spätzle is a German noodle dish. Boiled, then pan-fried, this version was extremely flavorful.

And a plate of roasted cabbage, carrots, and potatoes, with soft, hearty flavors. 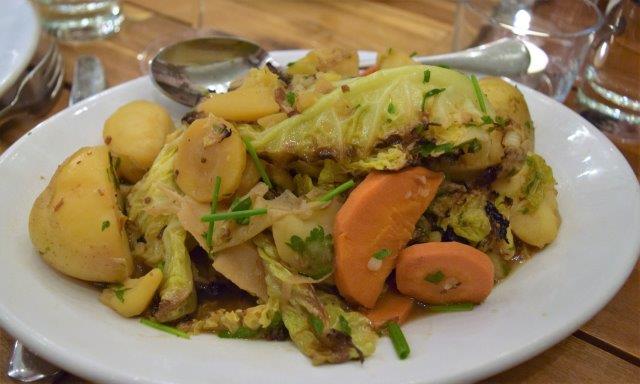 We ordered two very different bottles of Teutonic’s Bergspitze Pinot Noir from their Laurel Vineyard in Oregon’s Chehalem Mountains. Both wines were from 2015. In the first, the stems were removed, and in the second, the wine was made by leaving the stems on the fruit; “whole cluster.” 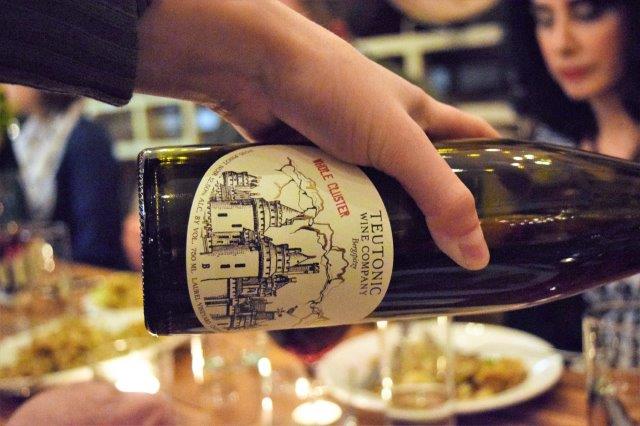 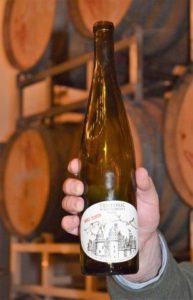 Usually, one of the first steps in making red wines is to remove the stems from the fruit. Leaving the stems on the fruit used to be considered rustic or old-fashioned. Increasingly though, leaving some or all of the stems on the fruit is being done more and more, especially when making Syrah or Pinot Noir. (Deciding the ratio to leave on becomes another component to winemaking and a winemaker may base that ratio on the ripeness of the fruit, and thereby of the stems, and other factors.)

With their Bergspitze, Teutonic used both methods with some of each of the same grapes, creating two very different wines. The more traditional wine, with stems removed, was more in the style of many Oregon Pinot Noir wines—light, fruity and versatile with many foods. This one was particularly light, in both color and flavor. The Whole Cluster version was richer and more complex. We enjoyed the deep anise flavors and a long finish to this wine.

Both wines paired well with each dish. But we especially enjoyed the way the whole cluster wine paired with the smokiness of the roasted vegetables and the richness of the sauerbraten.

Not Your Grandmother’s Streusel

Parallel decided to have some fun with dessert. We spooned up our “streusel” from communal wood boards. While shaped like streusel and and with a peanut streusel topping,  it more like a friendship between streusel and s’mores. The base layer was a Robiola marshmallow fluff. (Robiola is a soft, buttery Italian spreadable cheese made with varying parts of both cow’s, goat’s and sheep’s milk.) Atop this was a layer of grape chutney, and atop that was the peanut streusel; a buttery mix of streusel crumb and peanuts. 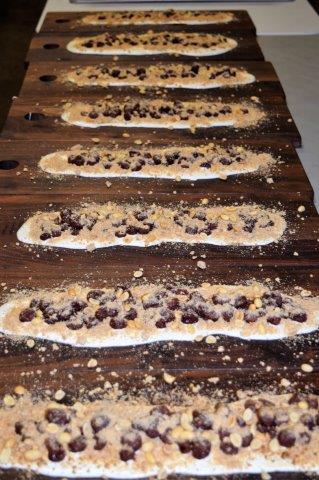 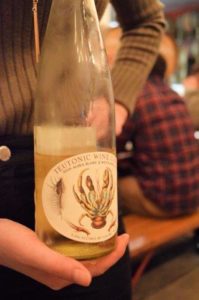 With this, we shared a bottle of Teutonic’s 2015 Estate Alsea Blanc, a 50-50 percent blend of Pinot Blanc and Pinot Meunier. This creamy dessert wine has the aroma of an apple orchard, and especially complimented the Robiola and the slight tartness of the chutney. A rather serious dessert wine that called out for a bit of attention, with a definitely original dessert—a great ending to our evening.

Pop-up dinners are hardly new and not originally an American phenomenon, but have been especially popular in the U.S. since the 2000’s. Pop-ups are also called supper clubs, or less commonly, flash picnics (although I have a hard time saying that one with a straight face). Somewhat like food trucks, they can be a great way for entrepreneurial chefs to get started.  Book event space—and this might be a warehouse, brewery, car dealership, really anywhere, with or without kitchen facilities. Then, create a menu, and promote on social media and word of mouth. Bon Appétit’s Mark Ducker actually announced pop-ups’ demise in 2013, but you’ll find them in small towns or large cities everywhere. Their popularity hasn’t waned for diners looking for a relaxed, social small-venue dining experience. 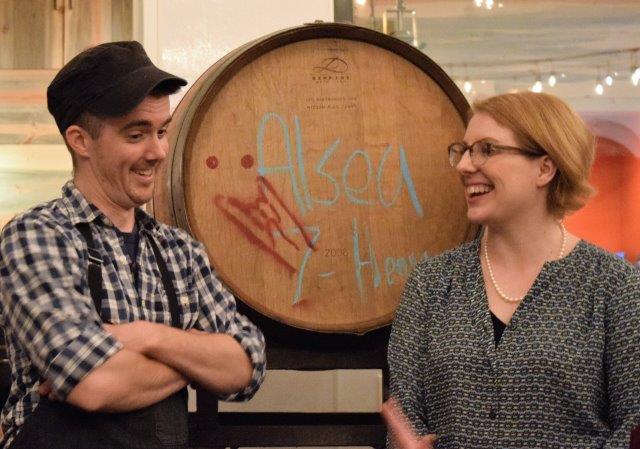 Keep your eyes open for Teutonic Wine Company’s wines and in Portland, events from Parallel Food and Drink.

Where Should You Stay in Singapore?