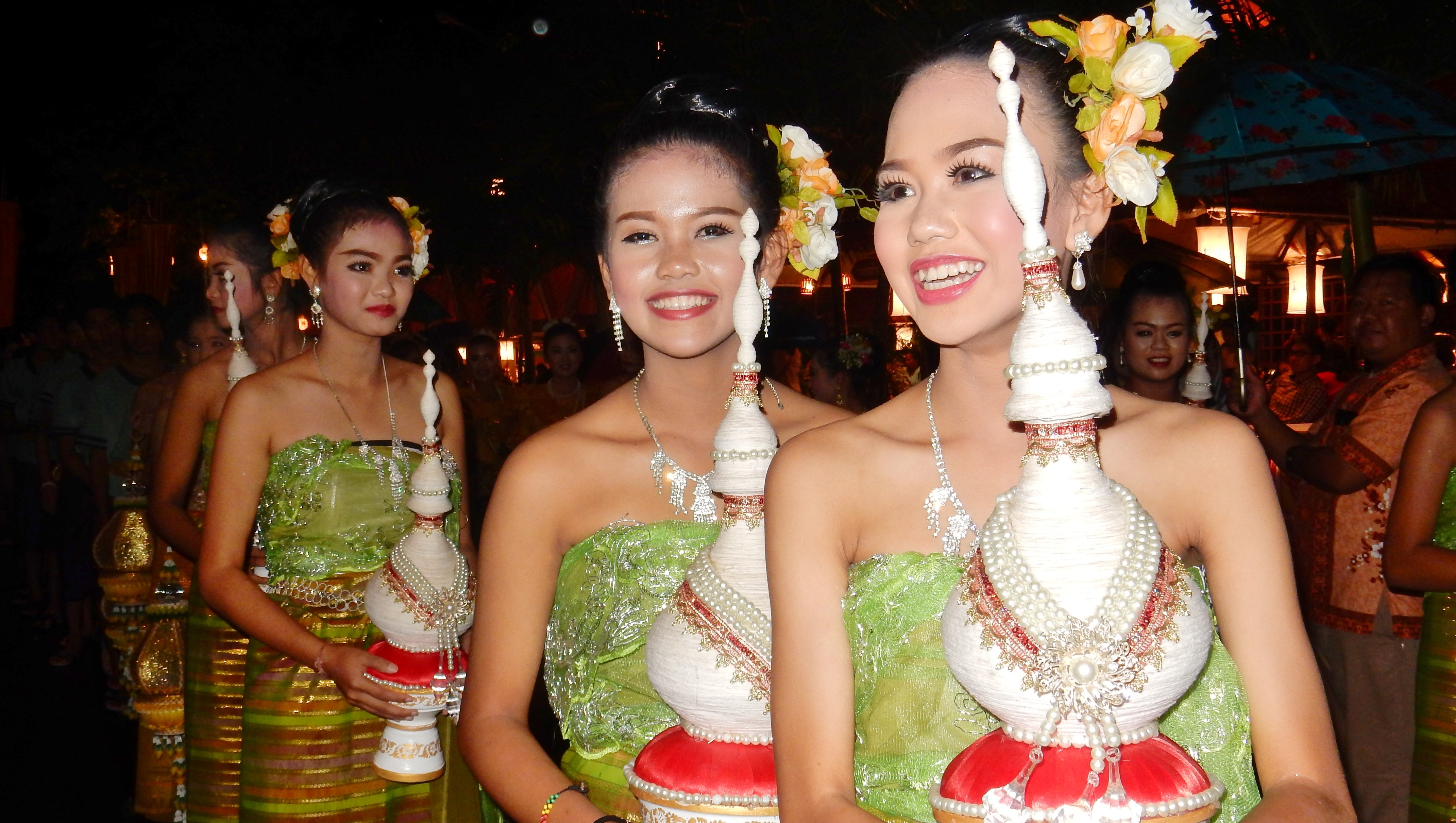 One of Thailand’s top festivals, Loi Krathong (or Loy Krathong) is held during November’s full moon. The festivities are held throughout Thailand, but the festival’s roots are in Sukhothai and people come from throughout the world to enjoy this festival of water and light. 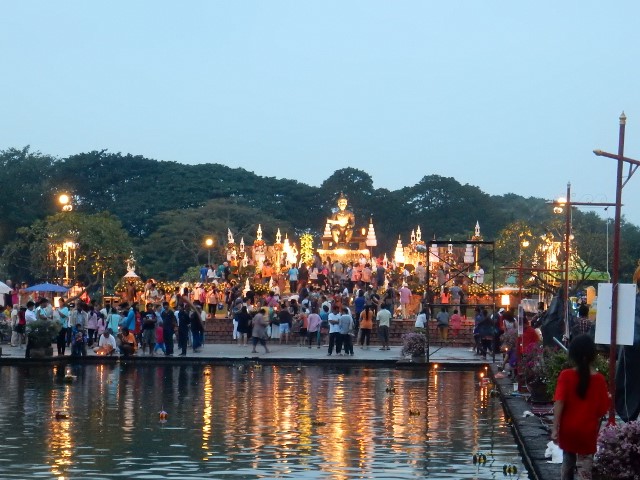 The Festival grows as dusk settles in.

Sukhothai and the Loi Krathong Festival

The ancient city of Sukhothai is located about 270 miles north of Bangkok, a little over a 5 hour drive, and more or less marks the start of northern Thailand. Sukhothai is considered to be the birthplace of the nation of Thailand; it was here in 1238 that several smaller kingdoms merged, creating one strong independent kingdom. The next 150 years was a golden age for this capital city; a written system was created, arts flourished, and religion became more organized. Eventually, Ayutthaya became the kingdom’s capitol, and Sukhothai remained more or less abandoned, but intact, even as the jungle took over. 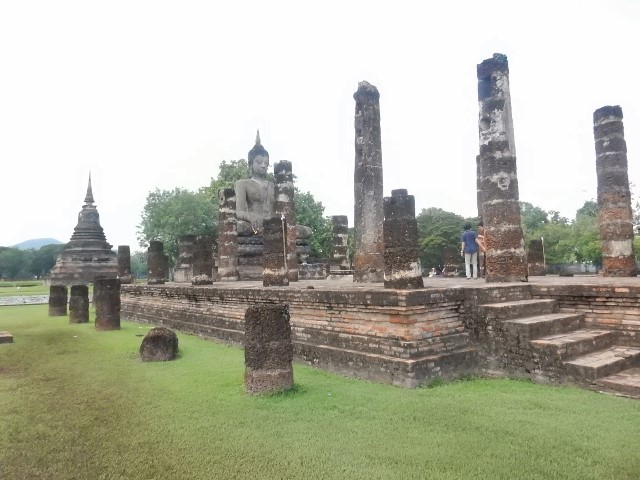 In 1978, the 27-square mile Sukhothai Historical Park was established. The $10 million dollar restoration project brought the ruins back for all to see—and they are indeed something to see. The accessibility and lack of crowds only add to the appeal. 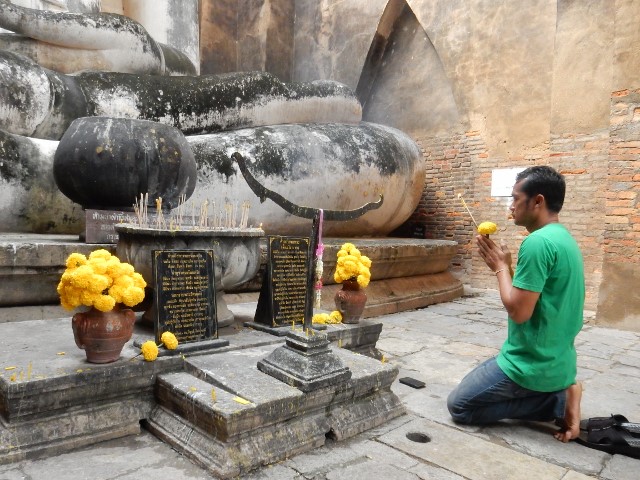 A Great Choice for Lodging

We stay at the lovely and affordable Legendha Sukhothai Resort, enjoying the Thai-style high-pitched roofs, dark woods, red lacquer, and lots of tile and brick and stone. The rooms are large with high ceilings, and are well-furnished and nicely outfitted. 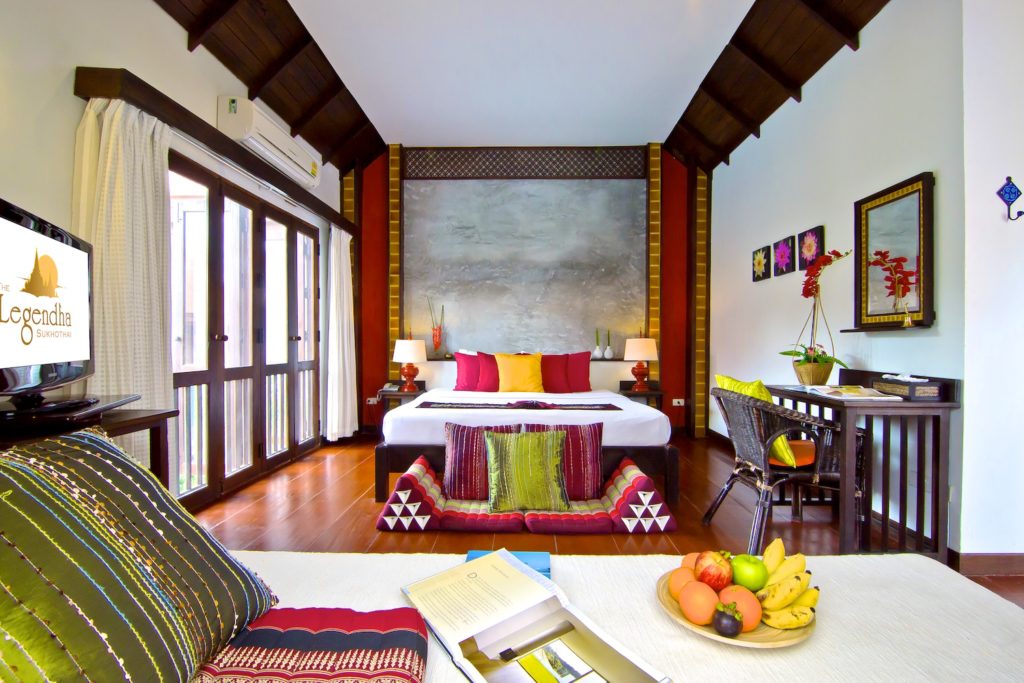 Some of the rooms have private lanais. The grounds are lush and beautifully landscaped. 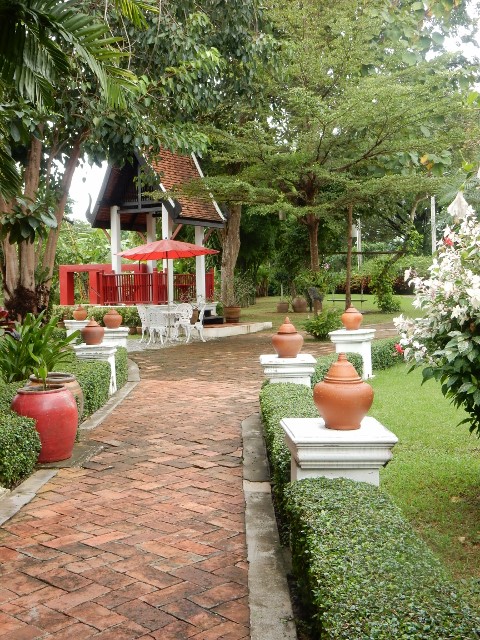 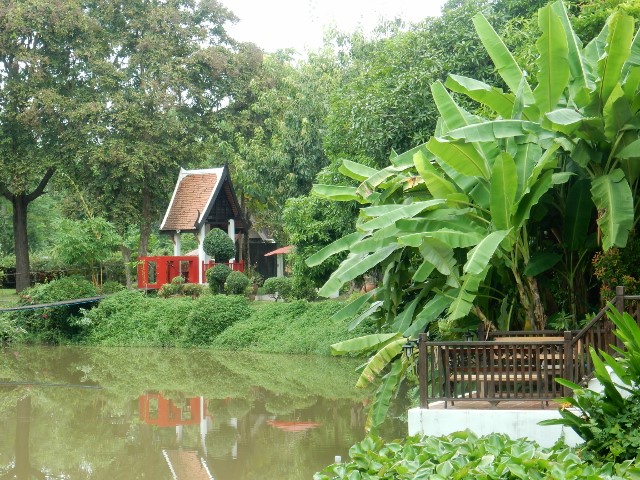 The saltwater pool is a great place to relax or enjoy a pool-side foot massage and a cool drink. 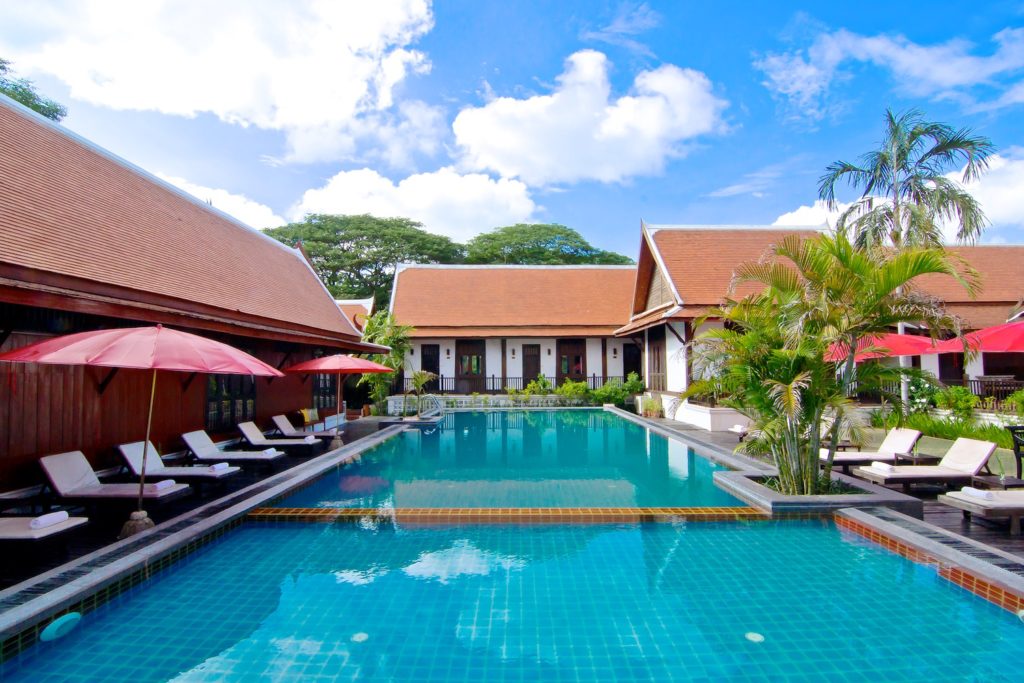 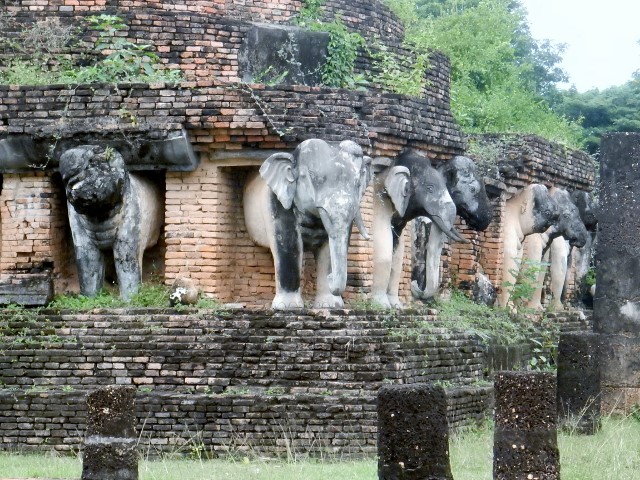 The hotel food is excellent, with both buffet and menu dining available. We enjoy a brief stage show with live music and dancing one evening. (Yes it was “for the tourists” but not glitzy-elaborate, featured student dancers, and was a fun break from our otherwise more independent travels.) 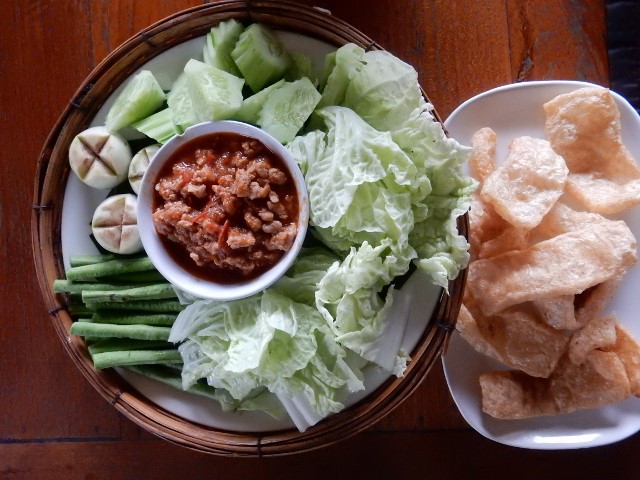 I rise at dawn to make merit with gifts of food and cash for the monks who arrive at the hotel doors; a daily occurrence throughout much of Southeast Asia. I’m feeling pretty blessed already, but it’s a simple, quiet moment that just adds to my gratitude for the chance to be here.

The Festival: Light and Water, and Family-friendly

Mid-afternoon, we take a short tuk tuk ride to the festival grounds. The festival atmosphere is high; there are families of three three-generations, young couples, bands of teenagers, the ubiquitous saffron-robed monks, tourists and everyone from town. We’re all taking it all in; smiling and snacking our way through the festivities. It’s a world class festival, yes, but it has a distinct feeling of a small city fair.

It’s time to select our krathongs. There are all makes, models and designs, everything from simple lotus-shaped floating candles to elaborate constructions of fresh flowers, banana and palm leaves on wood or foam bases. There are boats, hearts, swans, stupas or chedis, Mount Meru from Buddhist mythology, and lotus blossoms. Prices are from 10 baht to 200 baht (less than $.50 to $6.00). We watch a few women deftly constructing them on-site, many so detailed; it would take me months to make just one. 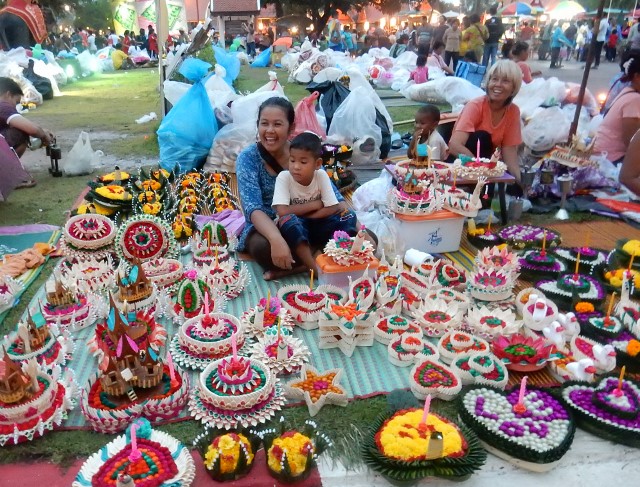 This is a family-friendly event, where the sites that etch deepest in my mind are of children watching the magic of the lights, not at all unlike my own looking up at Christmas tree lights when they were younger. 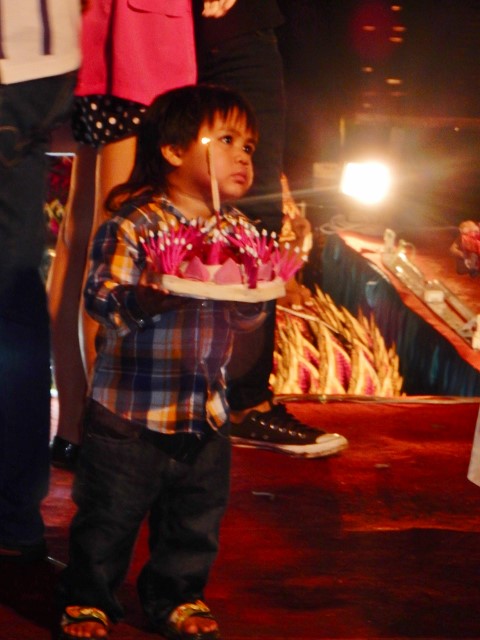 A child prepares to set his krathong afloat.

The festival grounds are decked out with lanterns, fresh flowers and water fountains. There are demonstrations of sword fighting and muay thai (Thai kick boxing) and traditional dance and music. There are parades of traditional fashions and blue ribbons awarded for the best krathong, baisri, and phan phun, Thai floral arrangements. Elephants and their mahouts walk the grounds, stopping for photos with children and tourists. 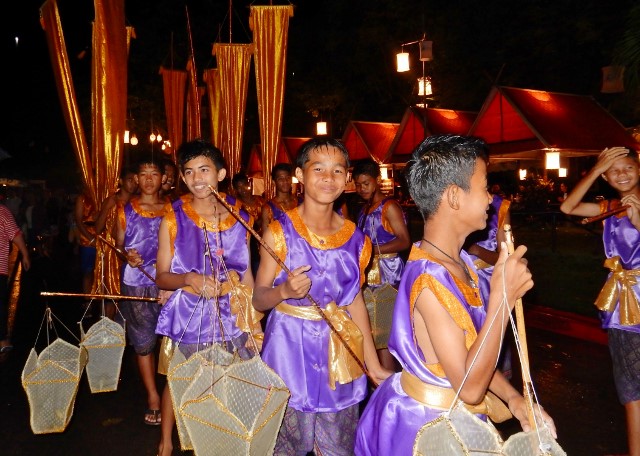 Boys get ready to perform. 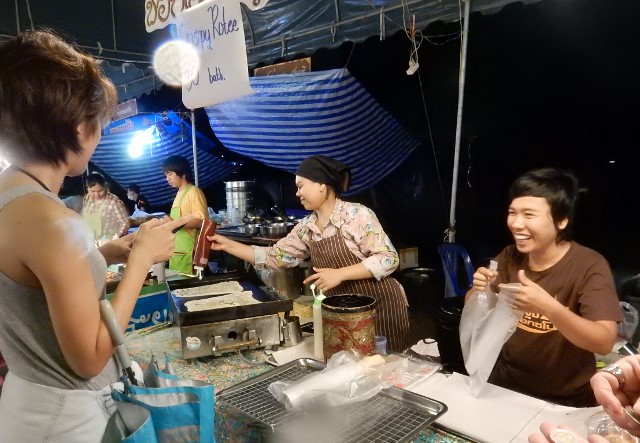 Festival food is the best. 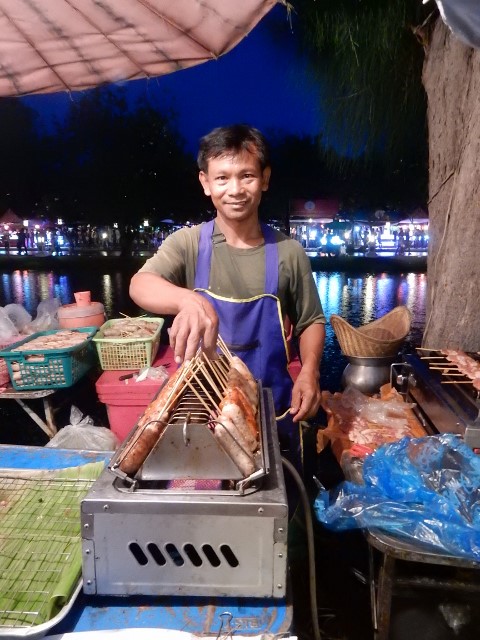 Other booths sell pantry food items, clothing, silks, kitchenware, gold and silver jewelry, as well as arts, crafts and souvenirs. It looks like any other well-organized major festival, but let’s face it, it’s not often you attend a festival held on the grounds of 13th century ruins!

Light Show and Floating Our Krathongs

We find our seats for the first of two scheduled stage and light shows that tells Sukhothai’s story and the story of Loi Krathong. The ruins become a backdrop for a pageant includes music, lasers and lights, pyrotechnics, dancers, and sword fighting “soldiers”, and two elephants that lock tusks and trunks, and stand on their back legs while their front legs balance against one another in “battle”—it’s all here, and it’s all magic.

Back in the throng of the festival, we light paper lanterns, called khom loi, and watch as they float up into the sky. By the end of the night, the night is lit up with the constellations of lanterns as well as by the light of the full moon. 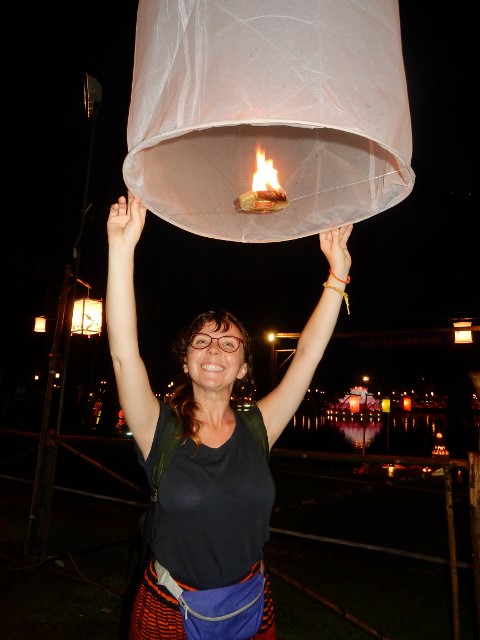 We make our way to one of the ruins’ moats to set our krathongs afloat. We join others, bending down to the water, borrowing lighters and jostle our belongings, while also attempting to snap photos of one another. There’s a lot of laughter, but the moment of pushing our krathongs out into the water is a little solemn as well. Are we giving thanks to the water goddess, Phra Mae Khongkha or to Buddha, casting away our sins or our grief, or wishing for love or prosperity? All and any of these are customary. For me, it’s simple gratitude for this memorable trip. 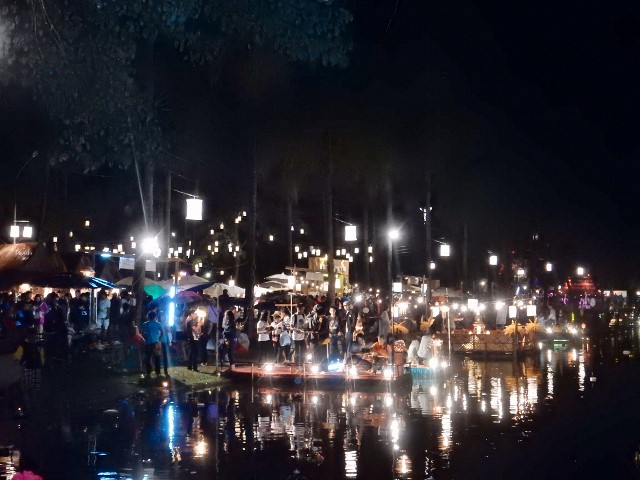 The next day, we explore the Park by daylight. All evidence of the festival, including debris from the elaborate fireworks show at the end of the night has been removed. The park is back to the important historical site it is. It seems impossible that there had been thousands of people walking these grounds the night before. 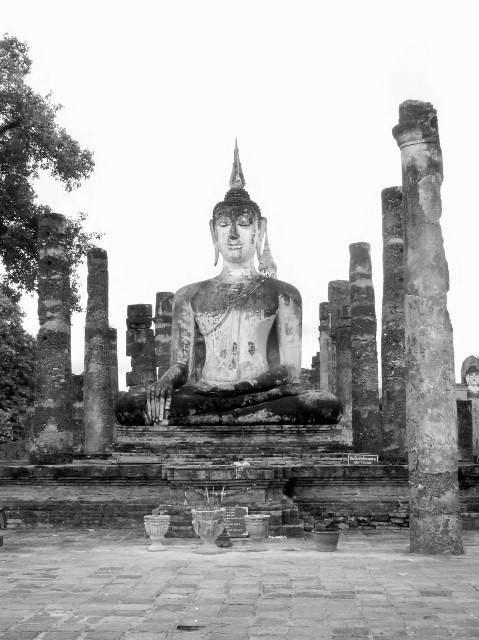 As we walk among the ruins, it’s striking how few people are here at this very important and beautiful 13th century site. There are no queues. There are no barriers to walking the ruins; the ruins are as much a living place of worship and mediation as they are an archaeologic and historic site. Don’t miss Phra Ubosot or Wat Mahathat, although I could have sat all day within the open air walls of Wat Si Chum. 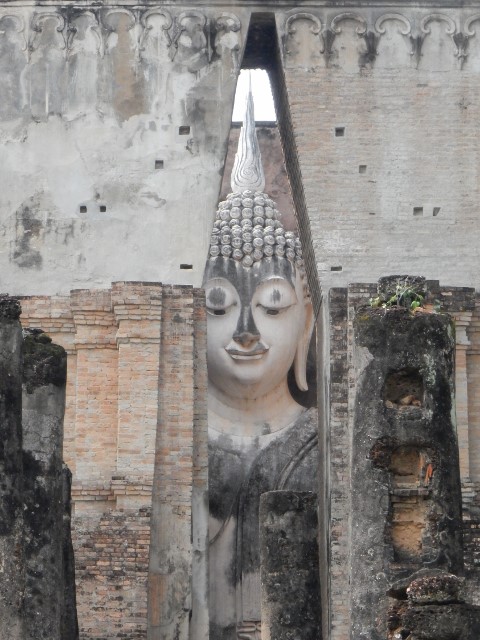 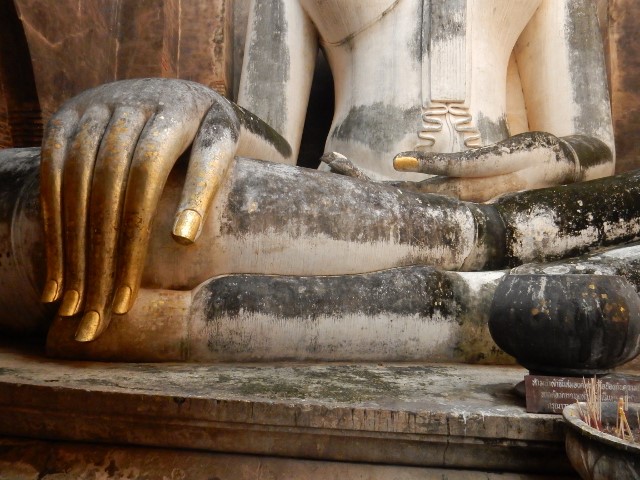 One of the best places to sit in Thailand.

Go to Thailand. Visit Sukhothai, and schedule your visit during Loi Krathang, if possible.

-All photos by Nancy Zaffaro except as noted.