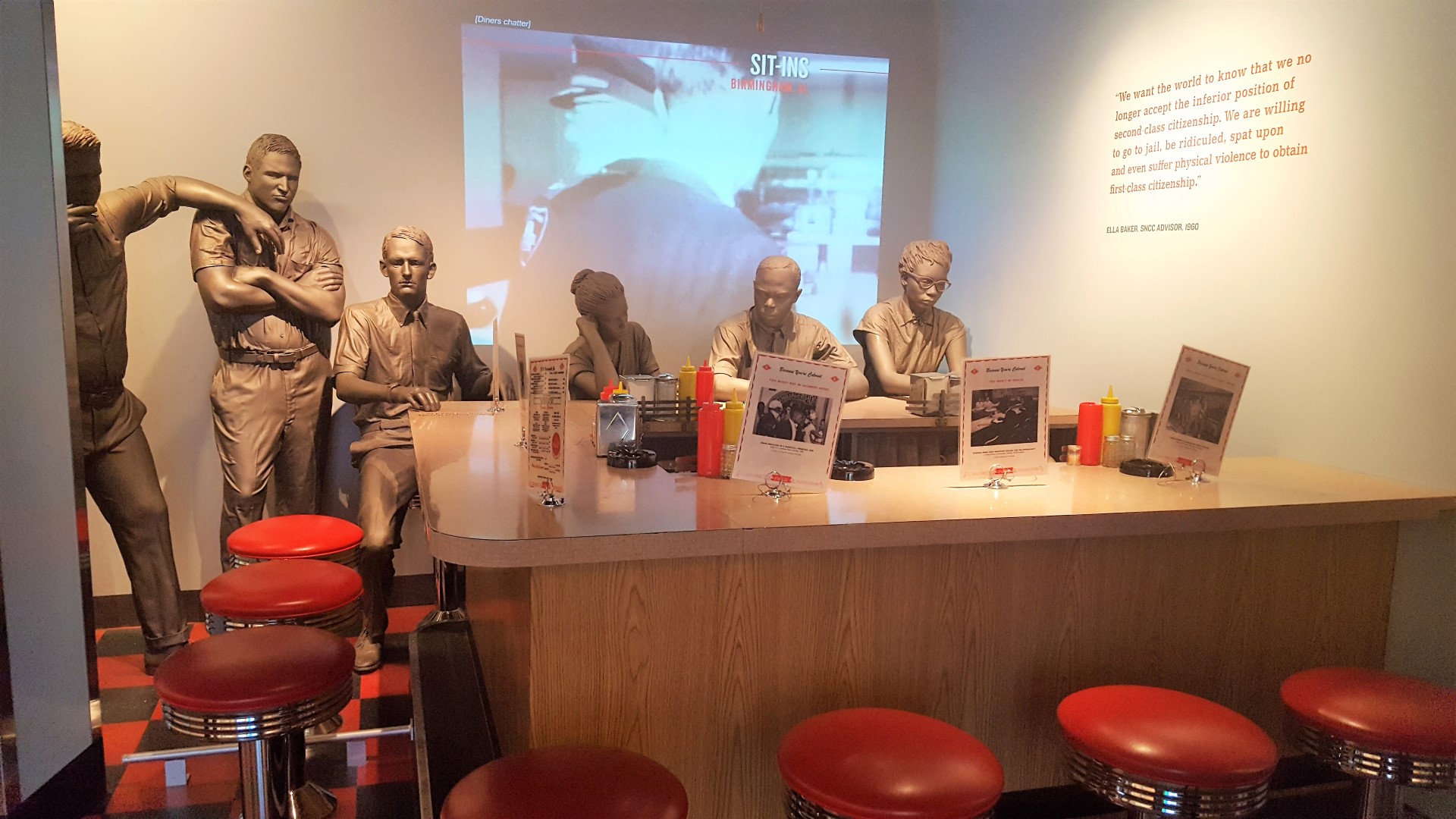 Fifty years ago, on April 4, 1968, on the balcony of the Lorraine Motel, Dr. Martin Luther King Jr. was assassinated. The motel, located at 450 Mulberry Street in downtown Memphis, Tennessee, is infamous for being the place where its most famous guest was killed. However, in addition to the motel being one of the top cultural and civil rights museums in North America, it also has a noteworthy history of its own that few people outside of Memphis know about. 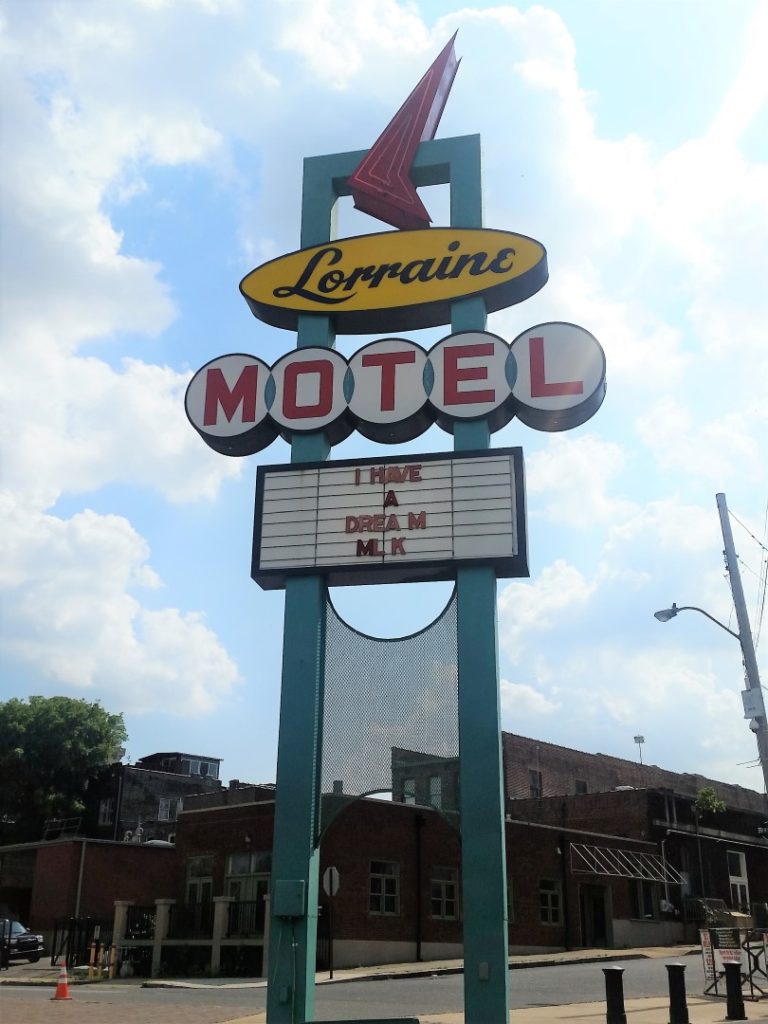 Before it became The Lorraine Motel, the structure began as an “all-white” hotel in the 1920s. First it was the Windsor Hotel, and later renamed the Marquette Hotel. In 1945, Walter Baily and his wife Loree purchased the 16 room, one story hotel located just east of the Mississippi River. The couple added a second floor, pool, courtyard, more guest rooms along with other improvements to turn it from a hotel into a motel. Walter named it The Lorraine Motel after his wife Loree and the song, “Sweet Lorraine.” 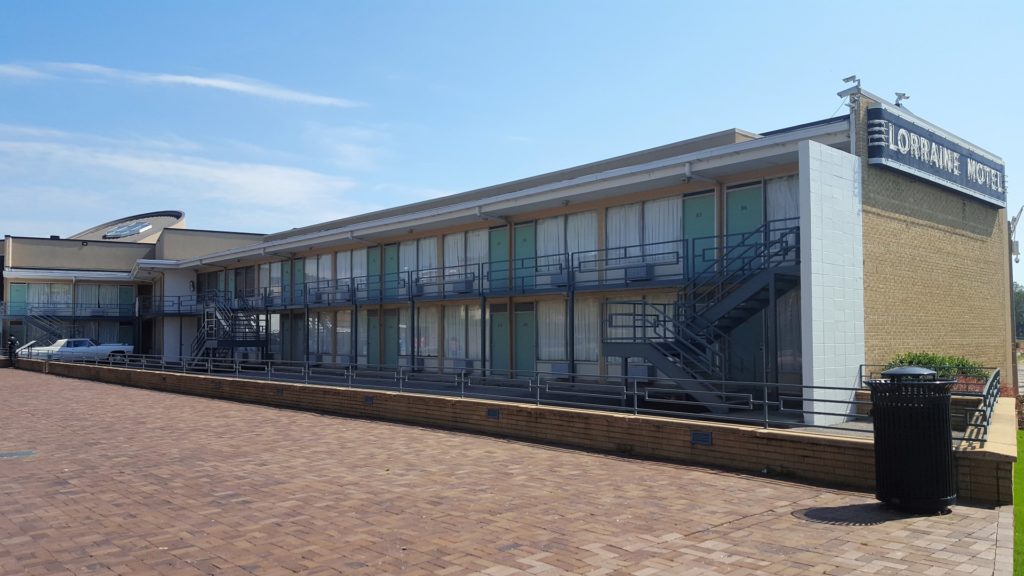 As time passed by, the motel eventually became an upscale place for both black and white travelers looking for a place to stay in Memphis. The reputation of being clean, affordable and good food courtesy of Loree’s home cooked meals kept the motel busy with repeat customers. It was one of the few places in Memphis that allowed people of color to stay overnight. The motel was listed in “The Negro Motorist Green Book,” a guide with listings of hotels, restaurants, gas stations and other business that welcomed people of color during the Jim Crow era in the South. 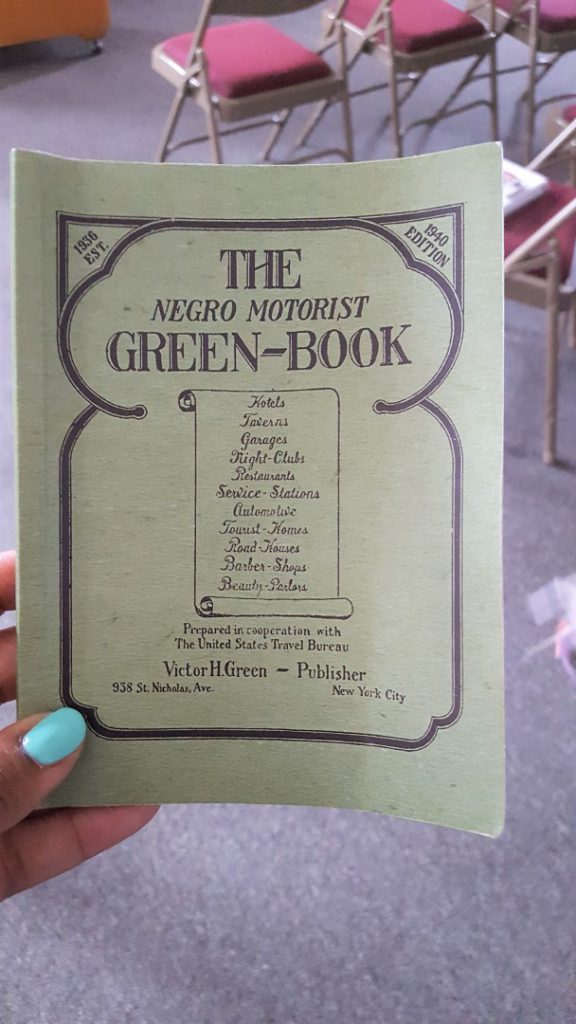 Due to its close proximity to Beale Street and Stax Records, The Lorraine Motel was popular with musicians. Beale Street was the center of life for many people of color in Memphis and it was in walking distance of the motel. Some of the motels regular guest reads like a Who’s Who of music legends, including Ray Charles, Otis Redding, Cab Calloway, Count Basie, Aretha Franklin, Louis Armstrong, Sarah Vaughan and Nat King Cole. Therefore, it is not a surprise that two famous songs, “In the Midnight Hour” and “Knock on Wood” were written at the motel.

In spite of the legendary status of these musicians, Martin Luther King, Jr., was still by far the Lorraine Motel’s most famous guest. He stayed at the motel on more than one occasion when he visited Memphis. In the spring of 1968, he stayed at the motel again when he came to support the sanitation worker strike. On April 4, 1968, he took a moment and walked outside of his second floor Room #306 and talked to friends in the parking lot below. As he turned around to walk back to his room, a bullet struck him in the neck, he died instantly.

When Loree Bailey heard the shot that day, she suffered a stroke. She died on April 9, 1968, the same day as King’s funeral. Walter Bailey continued to run the motel, but he never rented Dr. King’s Room #306 again. It was the end of an era for the motel. 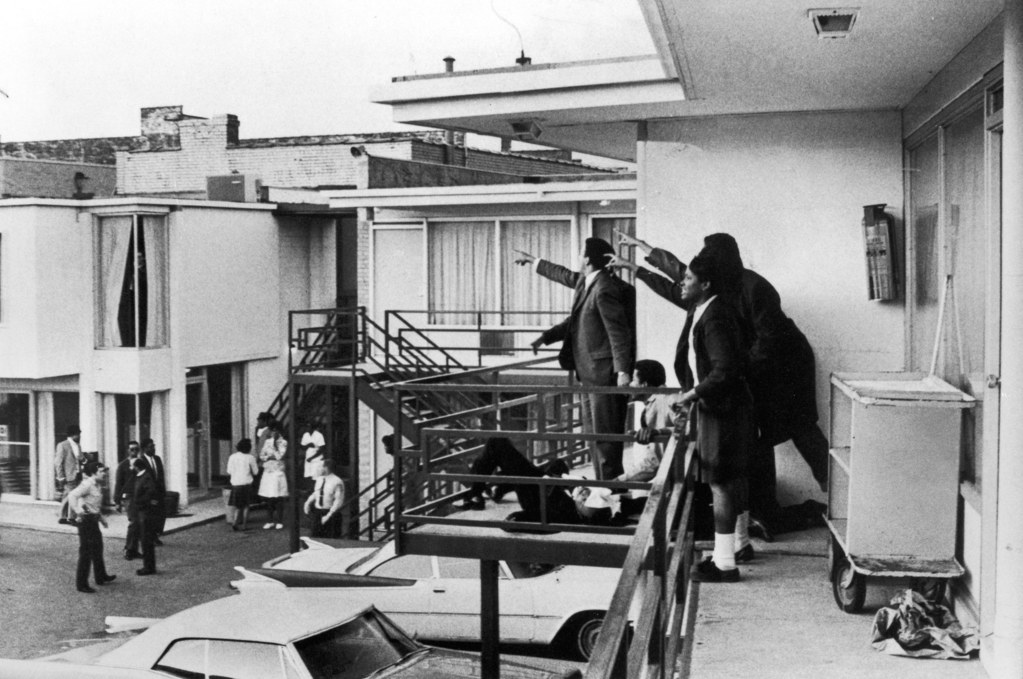 The National Civil Rights Museum at the Lorraine Motel

Today, the Lorraine Motel still stands on Mulberry Street. Established in 1991, it is the National Civil Rights Museum, one of the county’s top civil rights museums. The motel is instantly recognizable, and gives visitors the illusion of going back in time upon arrival. Standing in the front of the motel with two classic cars parked out front, a white 1959 Dodge Royal and a white 1968 Cadillac, complete with their iconic motel sign, visitors can’t help but feel as if they were back in the motel’s heyday. A large wreath hangs on the balcony outside of Room #306, the spot where King stood at the time of the assassination. The first thing that will come to mind when looking up at the wreath is the famous photograph of Dr. King’s fellow civil rights activists  pointing off into the distance, at the place from which they believed the shot was fired. 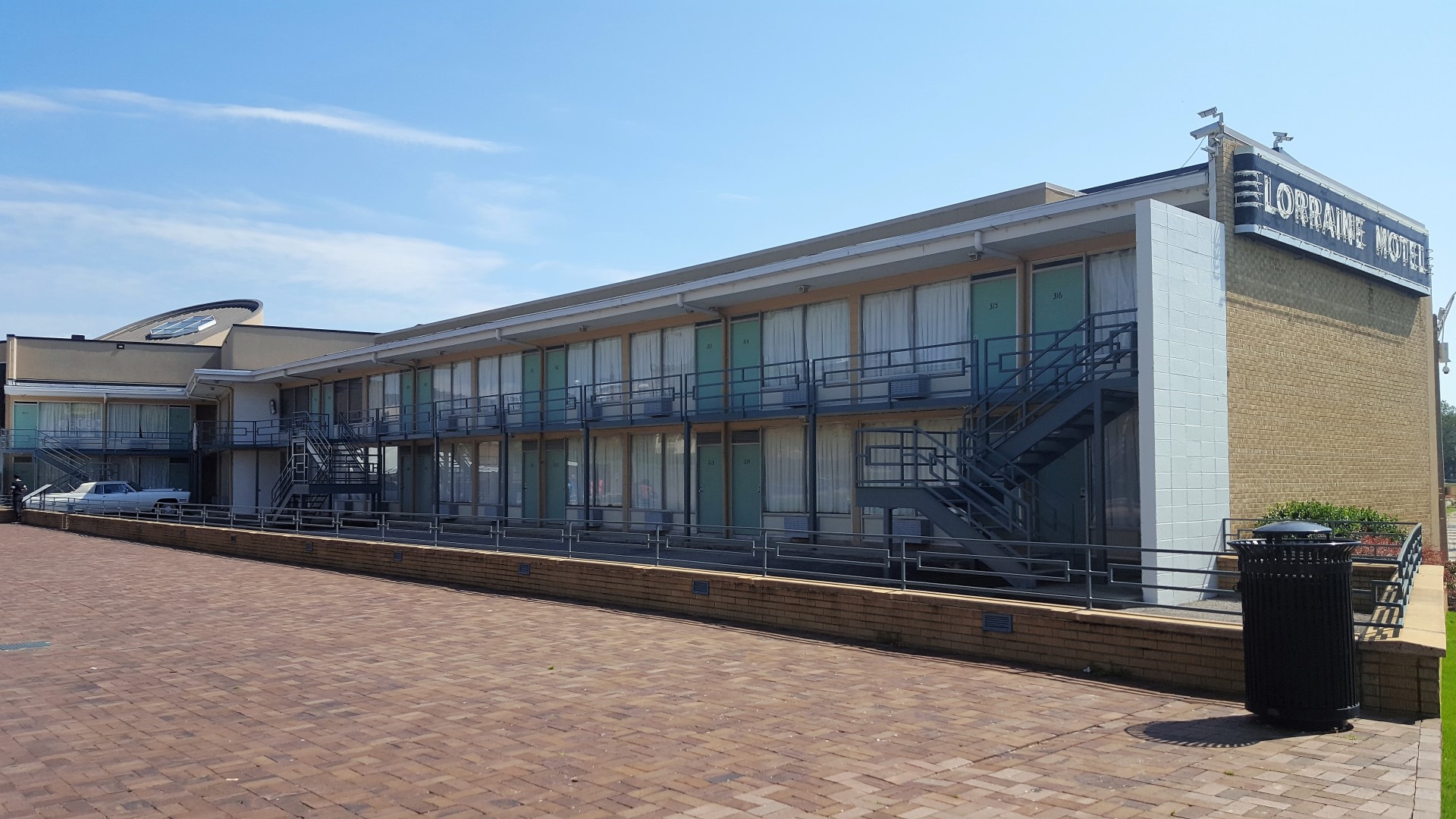 A friend of Dr. King and activist, gospel singer Mahalia Jackson’s voice fills the small corridor where visitors can view his room through a glass wall. As previously mentioned, after King was killed, Walter Bailey did not rent Room #306 again. Instead, he turned it into a memorial. The museum was able to keep the room intact just as Bailey did. The room has been preserved to capture exactly what it looked like on that tragic evening. There are two beds. King’s bed was not fully made because he was not feeling well and had been lying down. Cigarette butts in ash trays as well as dishes left in the room from the kitchen where Loree Bailey prepared food are all on display as they were on that last day of his life.

Inside the museum, visitors will take another trip back in time. Using hundreds of artifacts, films, oral histories, and interactive media, the exhibits guide visitors through five centuries of history, from slavery to the civil rights movement. 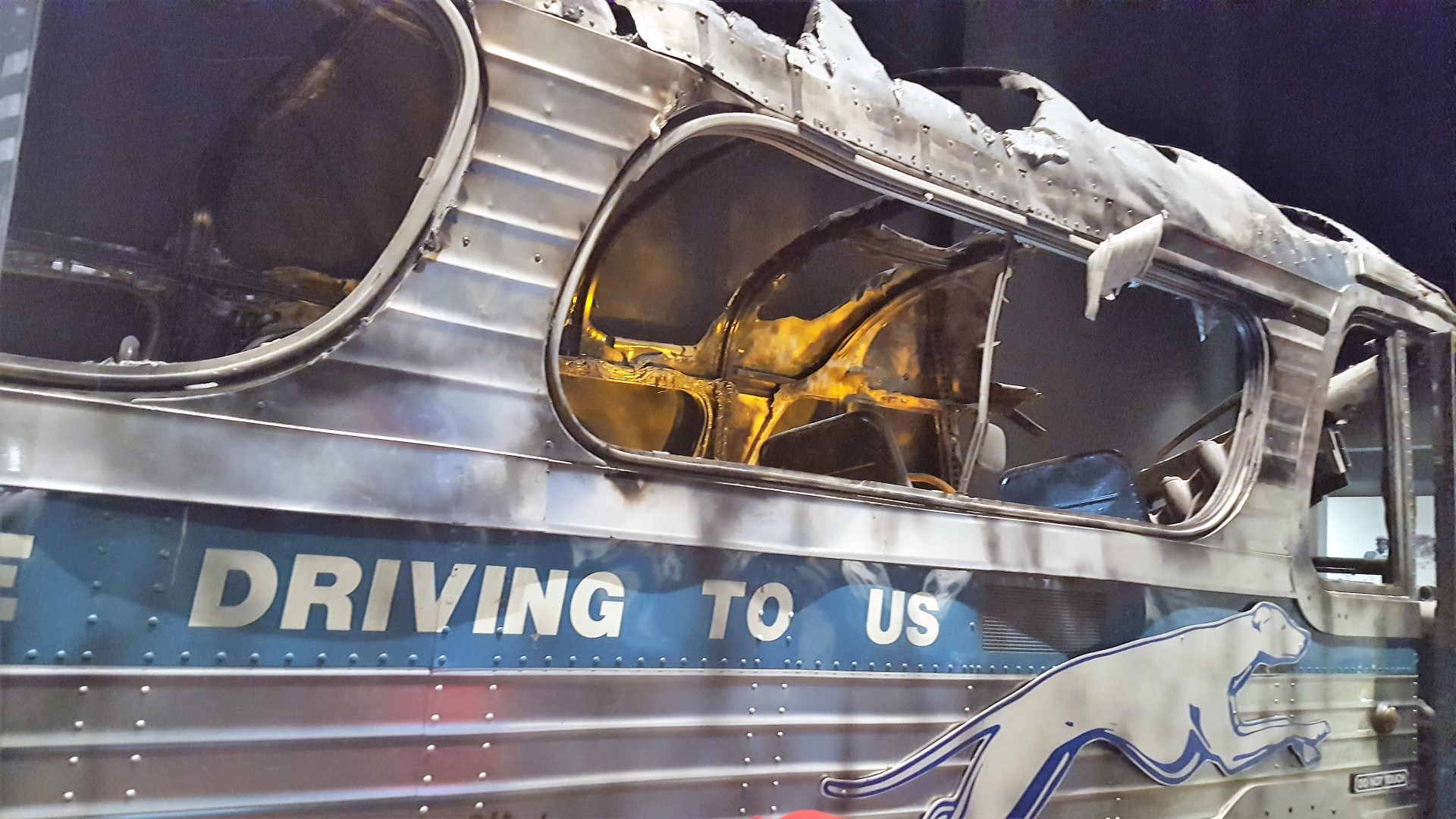 This exhibit provides visitors with graphics that show the global impact of slavery. Complete with a walk on the floor map of the Atlantic slave trade, this space is a good foundation for anyone who wants to learn more about the slave trade. There are many personal stories that are told within this exhibit as well as well-crafted sculptures to replicate what the slave trade “looked” like during that time period in history. 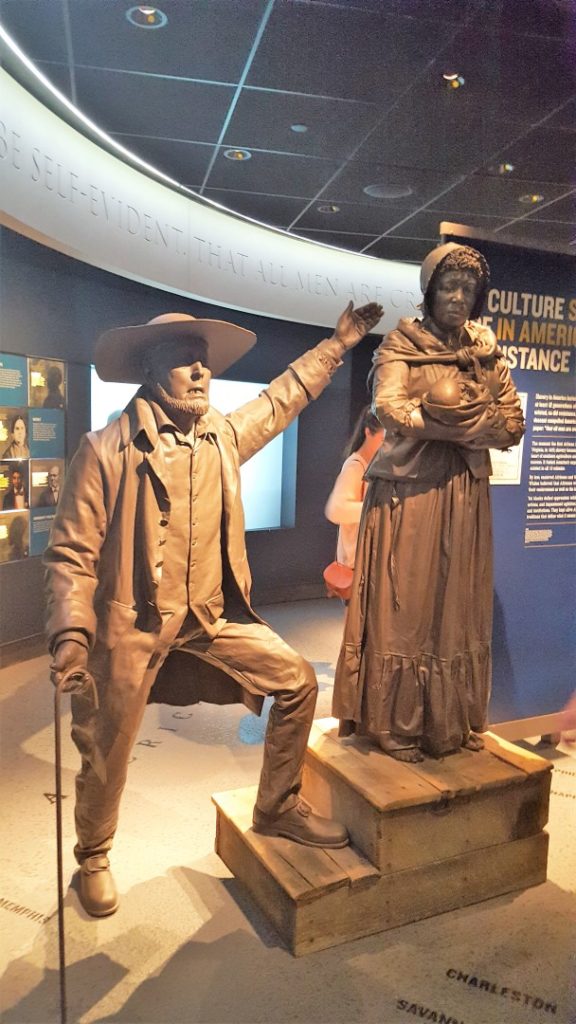 One of the most significant events in the civil rights movement was the Montgomery bus boycott. The exhibit shows figures that are walking on the sidewalk beside a bus instead of on it. It also has Rosa Parks as the only person sitting on the bus, in the front to make sure the point is not lost. 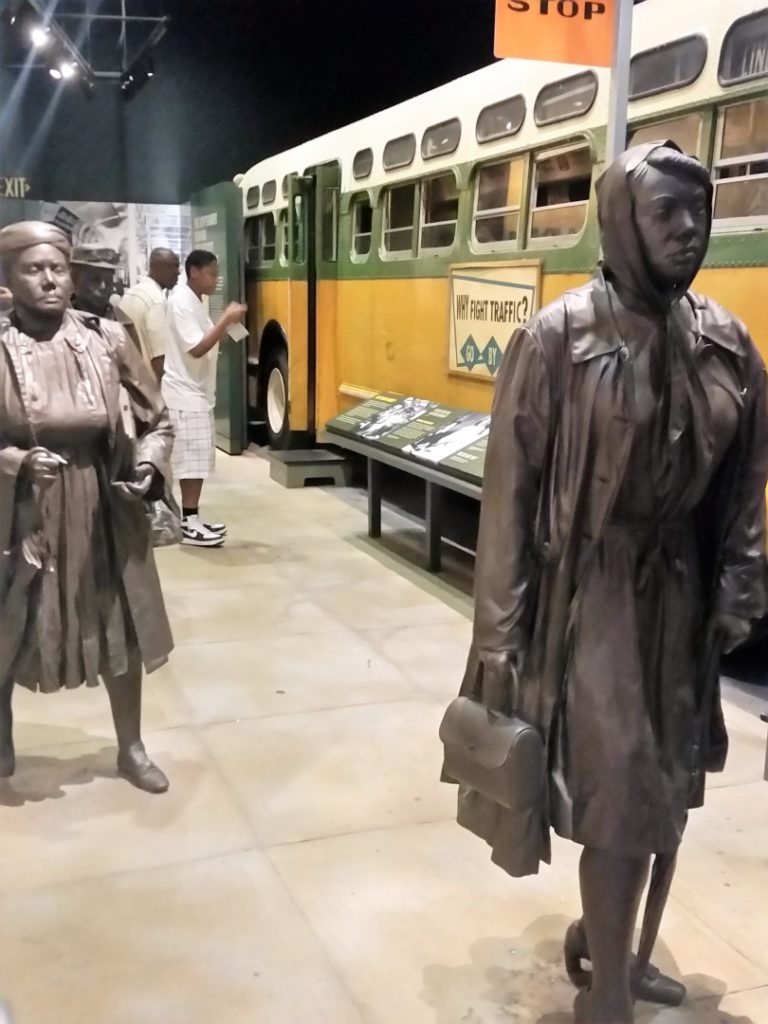 Lifelike figures are sitting around one of the original lunch counters in this exhibit. This is one interactive exhibit that visitors like to take their time. There’s a film projected on the wall behind the lunch counter showing actual footage from when they took place. In addition, there are several opportunities to hear boycott stories from the actual participants. 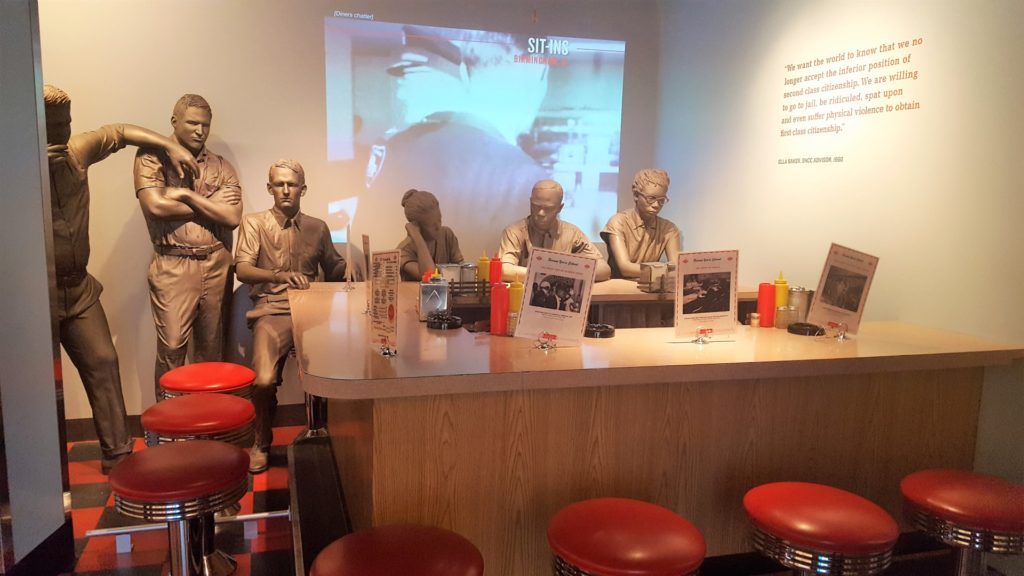 In 1960, the Supreme Court outlawed segregation in bus and train terminals. In 1961, the Freedom Rides began sending hundreds of young black and white people into the South on buses. They were met with violence from protestors and the event drew international attention to how America treated some of its citizens. The Kennedy Administration’s reluctance to step into the conflict during this Cold War period is covered in this exhibit. In addition, the personal accounts and history of six Freedom Riders who were arrested can be heard.

As visitors exit the museum, they glimpse their shadows cast alongside a wall of marchers. This encourages visitors to realize they have a voice and should join the ongoing movement for human rights.

Walter Bailey died in 1988 and did not live long enough to see the opening of the National Civil Rights Museum at The Lorraine Motel. He was the first person to make sure that Dr. King’s room and legacy at the motel stayed intact. The Lorraine welcomes more guests now than it ever did when it was a motel and it all started with one man who wanted to respect the life of one man—a guest at his motel. 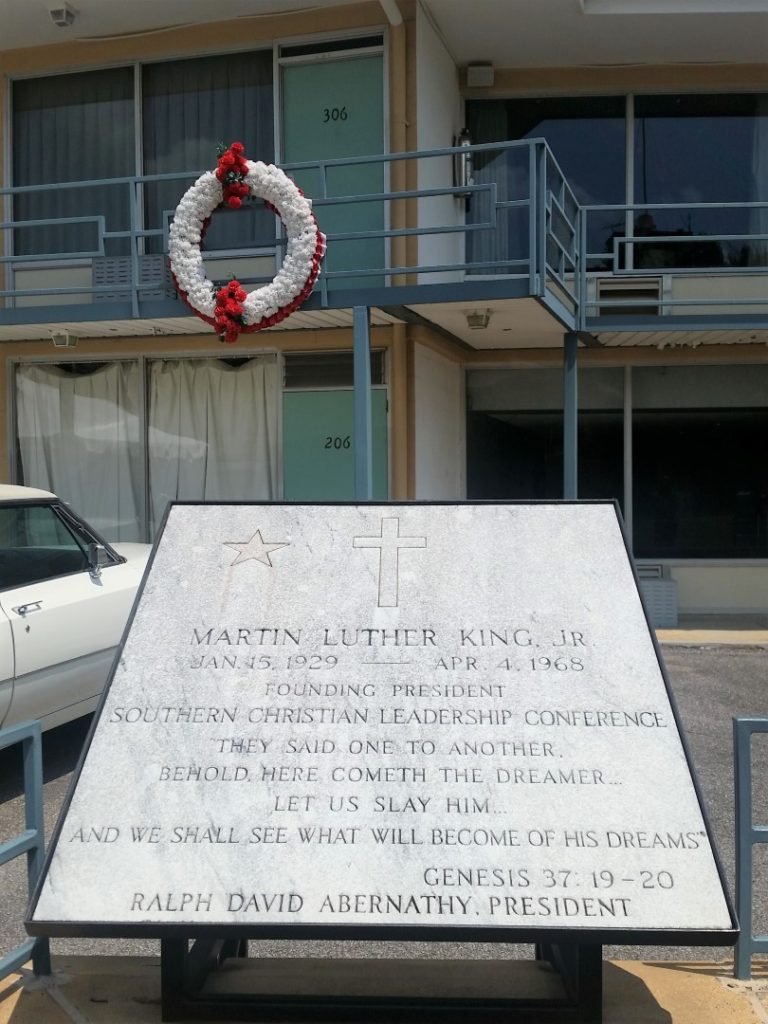 -All photos by Tomeka Allgood, except as credited.

Tomeka Allgood is a freelance travel writer and travel blogger based in Nashville, Tennessee. She is the founder and managing editor of Short Weeks-Long Weekends.com, a travel blog dedicated to the weekender. She writes on a broad range of topics that includes but is not limited to: art, history, culture, travel, music, food and wine. She specializes in places and attractions that relate to African American heritage and history.

AWESOME article!!!! Ms. Allgood gave a very interesting and accurate description of the museum, motel, and history. As a native of Memphis, I grew up during that era and remember vividly that day.

I thoroughly enjoyed the article!

So glad you like and approve, Anthony, especially as a Nashville native growing up at this time. I’ve been watching a bit of the events honoring Dr. King today at the Lorraine Hotel. Wise and eloquent words shared, as well as well-spoken calls for the work ahead. I’m pleased Tomeka Allgood shared her article with us.

I look forward to reading more of her articles. Other than her blog, do you know if she is published elsewhere?

Anthony, most definitely! Tomeka is a freelance writer and part of the ConfettiTravelCafe community. She has another article on our site (click on her name in her bio just above to take a look.) She also edits her own site, and we’re happy to share the link to that in her bio as well!

My personal site is in my bio. I freelance and usually post on social media when new pieces are published.

Thank you so much for your kind words! History is something that we should never forget and I was honored to be able to write this piece for Confetti Travel Cafe.

Wow, I had no idea that Martin Luther was shot here in this Lorraine Motel. It is understandable that it is the perfect place for a civil rights movement. Thank you for educating me.

So glad you liked, and learned from, Tomeka’s article, Anu. Thank you for your kind words.

Incredibly interesting article. I’ve always had a keen interest in American history so reading your post has been a pleasure. Note to self: add Lorraine Motel to must-visit list asap.

Awesome article. I lovee history so this is right up my alley.

Wow, this is such a powerful (and informative!) post. Thank you for giving me the insight into King’s last place on earth. And great timing for the article.

Motel full of history. I had a chance to visit Center For Civil and Human Rights in Atlanta, learned so much about the movement. Now I built up my knowledge.

Great to see a post with so much history. So inspirational!

Very interesting read. I didn’t know much of the assignation of Martin Luther King Jr and it is always good to read up more on this important part of our history. Thanks for writing this.

What an important place for ALL AMERICANS to visit, to learn about the epic struggle of the time. So glad this exists and would love to see it in person one day. I didn’t know that famous motel was now a Museum. Thanks for sharing

That’s a very interesting read! I love to see the evolution of places through time, it’s always so interesting to dig into history like this, especially with such big and important events!

I learnt more about American history from this article than I ever did at school! Such a fascinating read. The museum looks really interesting and it’s a great way to remember the past. Thank you!