(It’s Not Really) About the Eclipse 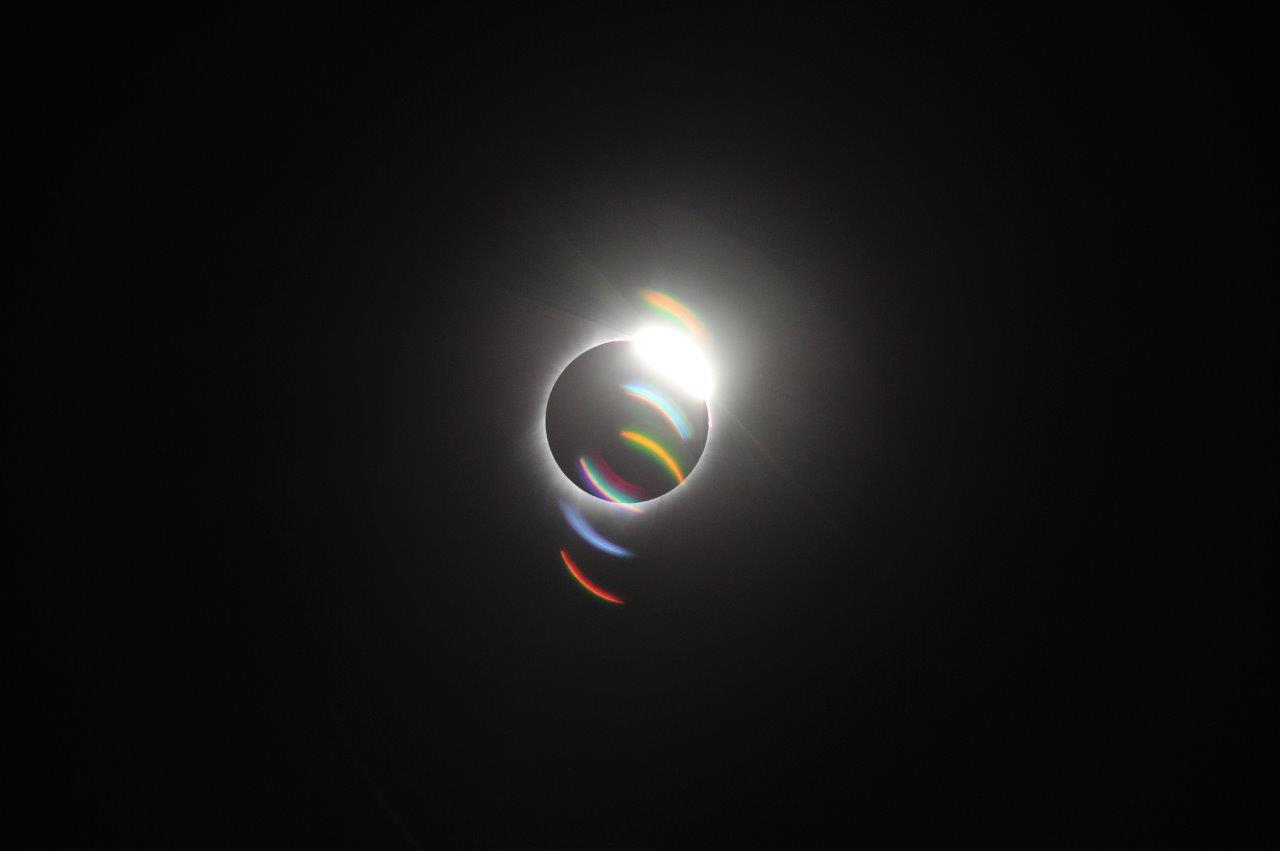 The eclipse visible across a swath of the United States on Monday, August 21, 2017 was a fascinating celestial event. I’d seen lunar eclipses, but never a solar eclipse. Living in Oregon, one of the twelve states on the “path of totality,” I had the opportunity to experience a total eclipse. And I willingly bought into the hoopla leading up to the event.

It’s a Big Deal Because …

The opportunity to see a total eclipse is rare for most of us, even if you deliberately go around chasing after them. Eclipse events do not “choose” a country or region, of course. (It’s sort a of spin of the dice. Or rather, of the moon and the earth.) It’s very unusual for an eclipse to affect one particular country. It’s our understanding that the last time an eclipse affected only the U.S. was in 1257. The path for the August 21st eclipse crossed the full length of the country (as it did in 1918, as well.) The next time we expect an eclipse to be seen only in the U.S. will be in the year 2316! (This happened recently in Australia as well, in 2012.)

The next eclipse the U.S. will see will be in 2024 and it will also be seen by Mexico, Canada and Central America.

Growing up with the big city lights of Chicago, my experience with star-gazing was mostly limited to trips to Chicago’s Adler Planetarium. Travel and having lived in smaller communities increased my interest in astronomy and the night sky. Prior to the eclipse, I had great fun reading up on annular, partial, total and hybrid eclipses, umbras and antumbras, Bailey’s beads, and the like, but I’m certainly not an expert.

Where to Go? What to Do?

In the months leading up to the eclipse, it seems everyone debated where to go for the event. There were dire warnings of heavy traffic throughout the state. Next came reports that areas just outside of the path of totality would still see about 90% of the eclipse. Both caused many in the Portland area and elsewhere to remain home or attend nearby house parties with family and friends.

In the end, I opted to join the party at a friend’s house in nearby Stayton, Oregon. Stayton is a town of 8,000 people in the Mid-Willamette Valley. It’s about 30 minutes east of Salem, Oregon, the state’s capitol city, and an hour from Portland. Mark’s home was in the “path of totality” and he was gathering a group of friends and family I enjoyed. 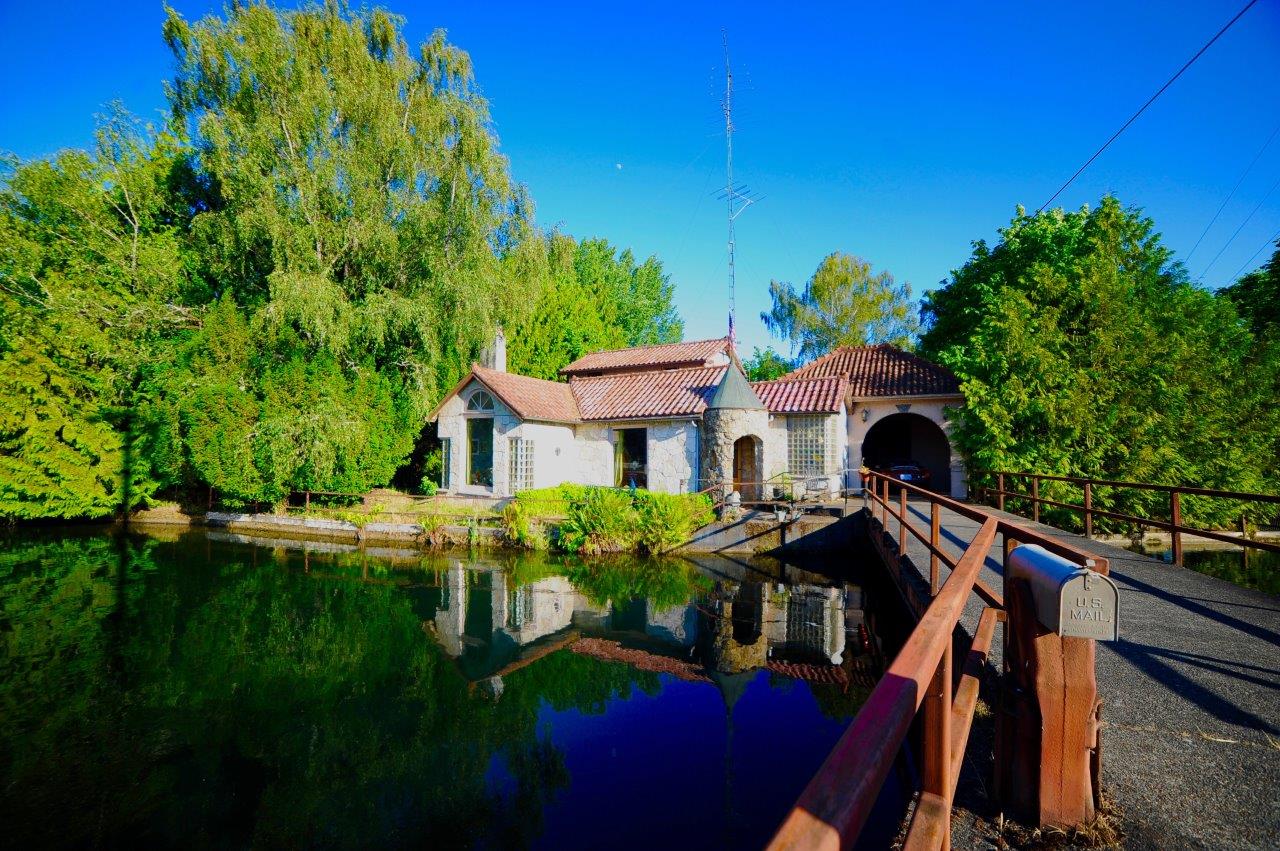 TripCheck.com, Oregon Department of Transportation’s interactive map, includes camera views from around the state. Green, green, green. There were no traffic issues except a bit in eastern Oregon, near Madras. I packed a cooler full of food and drinks and it was clear sailing to Stayton.

On Friday night, Mark had taken part in Stayton’s Howl at the Moon block party. On Saturday, as we trickled into town, the roads were still clear. We stopped in nearby Aumsville for the 49th Annual Corn Festival. Twenty-six tons of corn was brought in for the fest. We wandered food vendor and artist booths, but the real draw to this fest is the free cooked corn and bags of corn to take home. ($3.00 for 20 ears.) Each guest gets one or two free ears of corn, with or without butter. We missed the corn eating contest, but did get a chance to meet a couple of the Corn Festival Princesses. 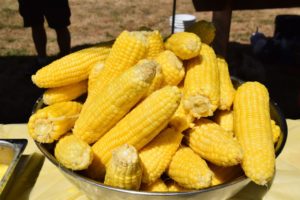 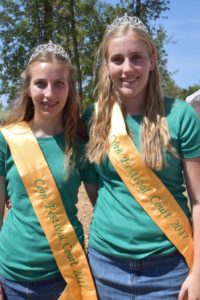 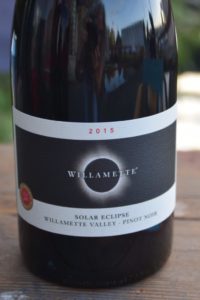 Nearby, Willamette Valley Vineyards, was just beginning their own eclipse festivities. Their open house weekend and viewing event included campfires, live music, food, and of course, wine tasting. They even released a couple of commemorative wines: a 2015 Solar Eclipse Pinot Noir and a 2015 Solar Eclipse Chardonnay. 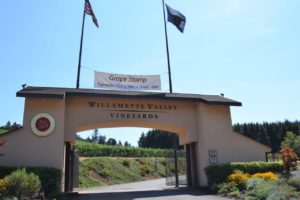 Like many businesses in the “path of totality,” Willamette Valley Vineyards held a viewing party.

Still no traffic. We drove into Salem and had a cider at 1859 Cider Company (highly recommend the Farmer’s Dry), and dinner at Ritter’s. We weren’t the only ones to wonder where the hordes of people were.

Back at the Stayton Castle, Mark put on his playlist of songs, chosen for the celestial tie-in rather than for their suitability for a party. Eclipse by Pink Floyd. Fly Me to the Moon by Sinatra. Dancing in the Moonlight by King Harvest. Blue Moon by Billie Holiday. Invisible Sun by the Police. Ain’t No Sunshine by Bill Whithers. And of course, Bonnie Tyler’s Total Eclipse of the Heart and the Beatles’ Here Comes the Sun. 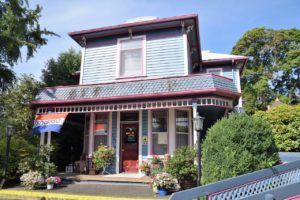 We trickled into town; fourteen of us in all. Bedrooms and make-shift bedrooms were assigned. We wandered town, snacked on donuts from The Donut Shop, visited the Stayton-Jordan covered bridge and enjoyed afternoon coffees and scones at Gardner House Bed and Breakfast. 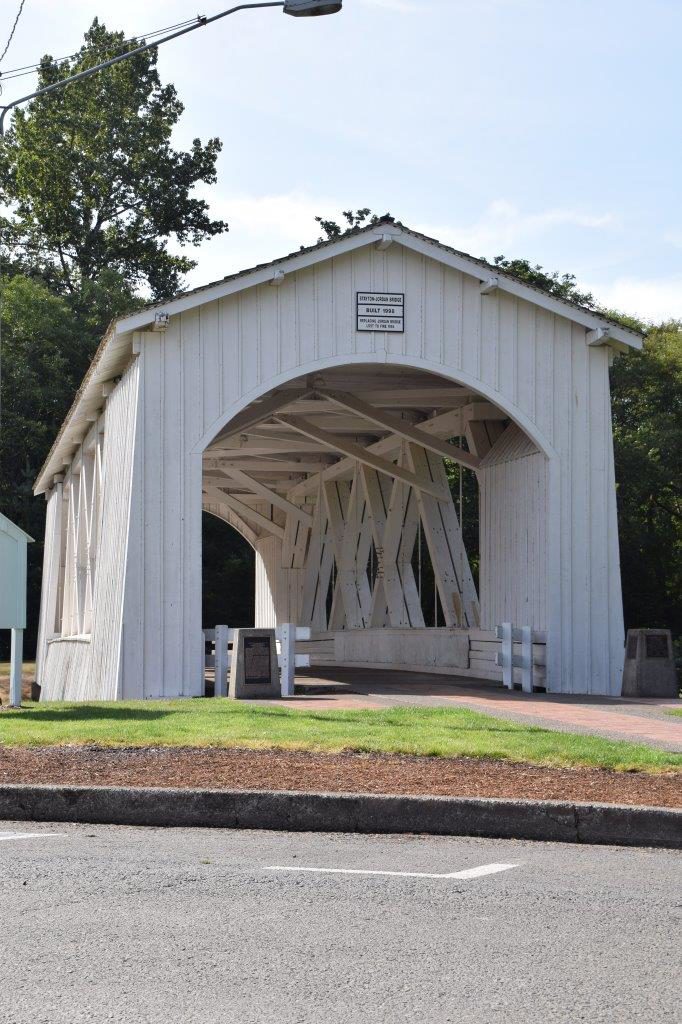 The Stayton-Jordan covered bridge is one of many in the Mid-Willamette Valley. 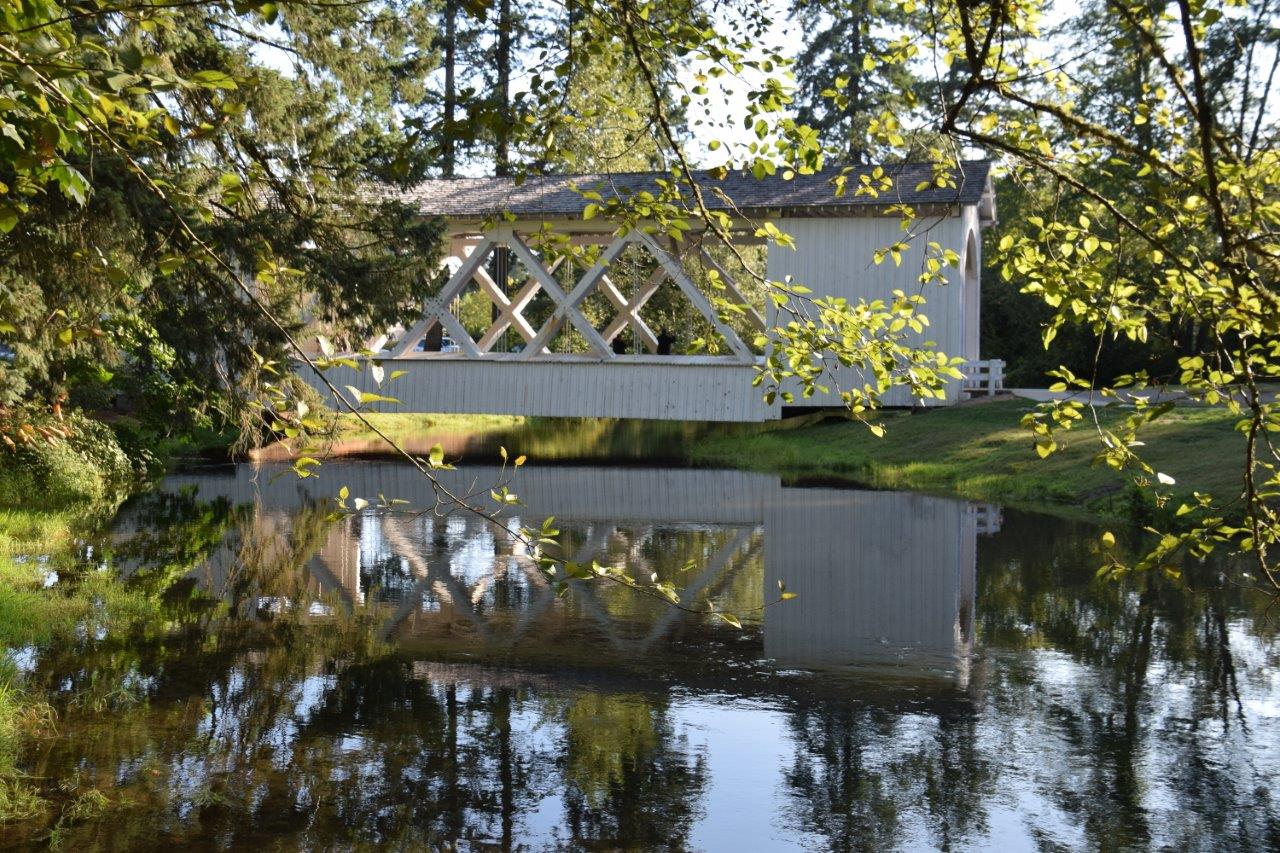 Many gathered at the park to view the eclipse. 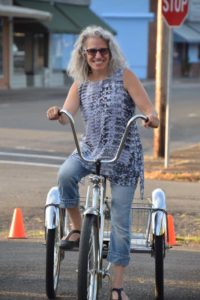 An eclectic collection of bikes.

From the bounty of food we each brought, we prepared dinner and ate al fresco. Some of Mark’s friends from town joined us as well. 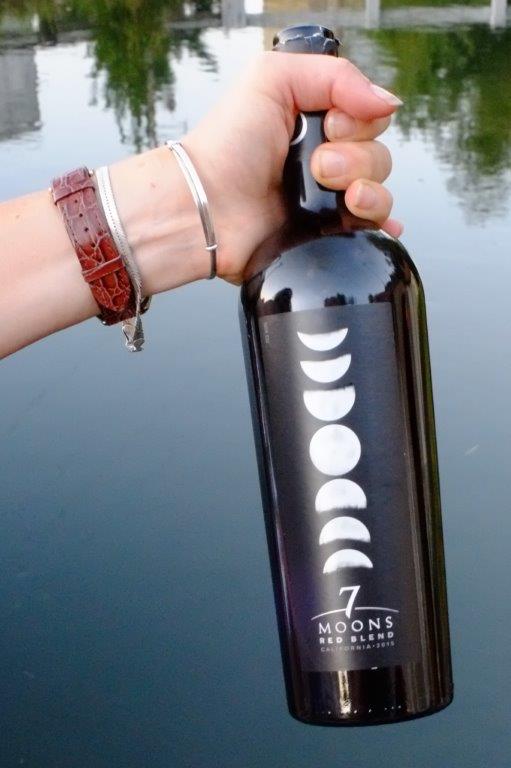 7Moons’ red blend was perfect for our pre-eclipse dinner.

Paul grilled the steaks he brought, cooked to order. There was cheese and charcuterie, corn on the cob, stuffed grape leaves, potatoes with parsley, and salads.

We enjoyed the Willamette Valley Vineyards wine, a bottle of 7 Moons’ Red Blend, and others. For dessert, there was sohan, an Iranian sweet, and lots of summer fruit.

We spent the rest of the evening relaxing, eating, drinking wine, talking and laughing. 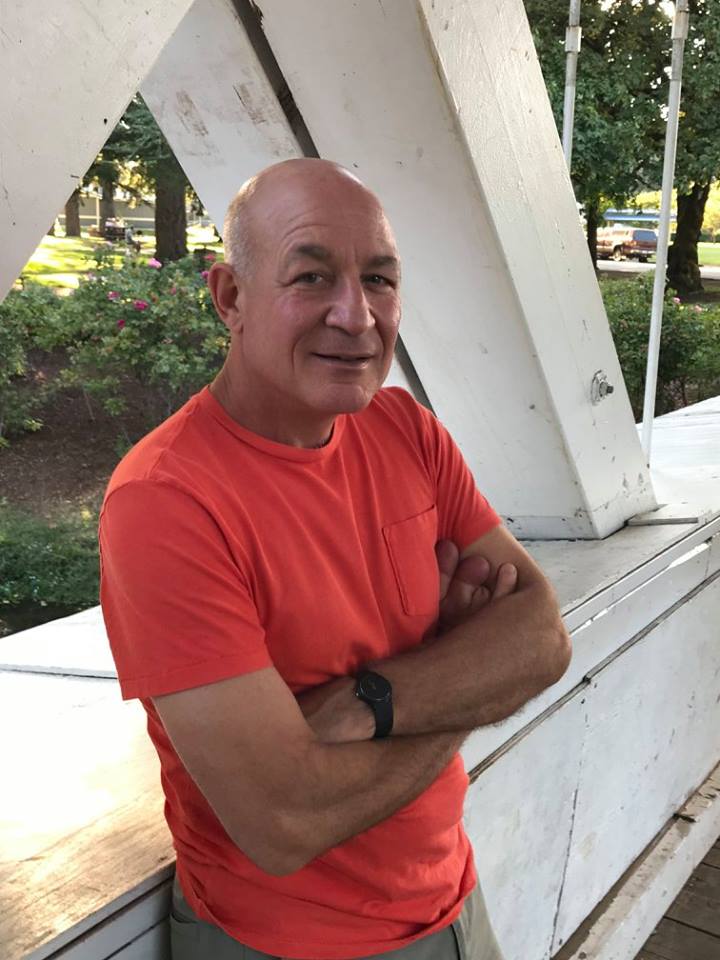 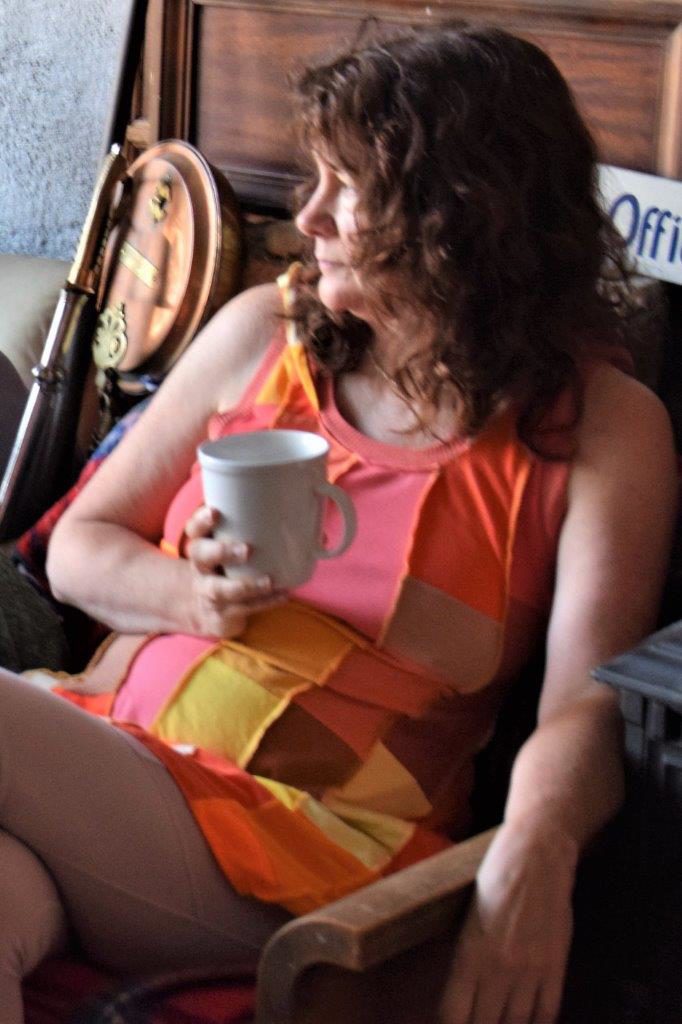 Paul at the bridge; photo by Susan Cerf. Susan, at the Castle.

I enjoyed thinking how these gatherings were happening all across the country.

The Eclipse, the Big Event

Monday morning. In Stayton, the eclipse began at 9:05 a.m. We scurried for coffee, assembled a breakfast, and brought chairs out to the driveway. Mark and Laurie set up the cameras. 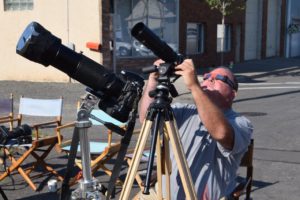 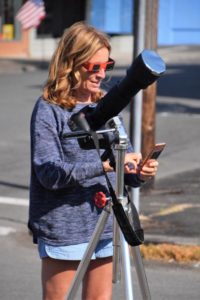 We settled in, donned our glasses, and looked up. 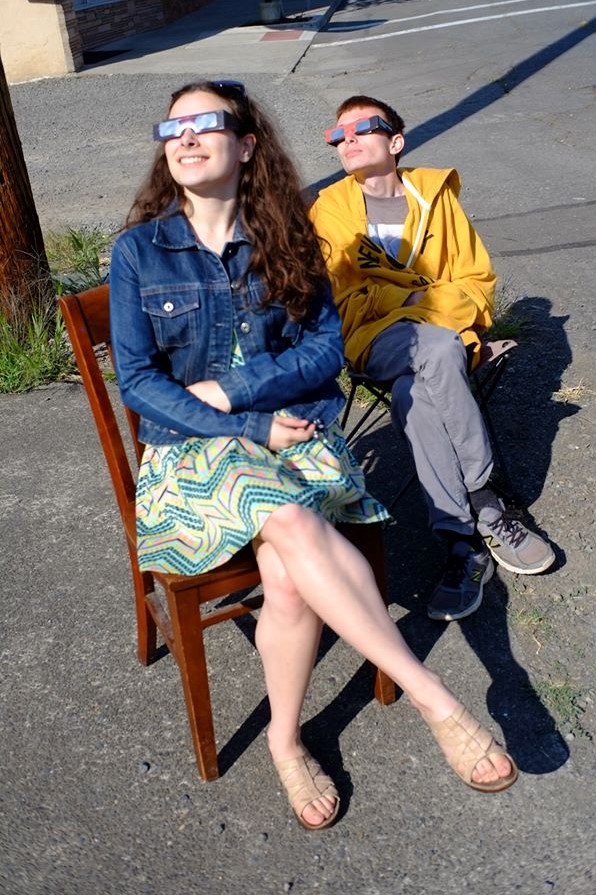 Seeing that first “bite” out of the upper right section of the sun was a marvel. I really did gasp. Little by little, the moon moved in, “growing,” and sliding left and down across the sun. 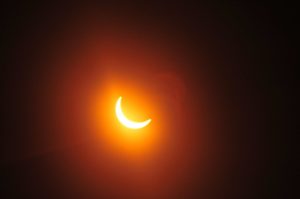 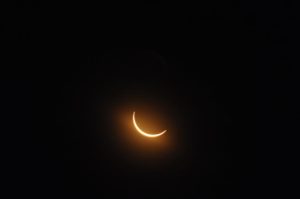 Shadows played across the ground at odd angles. The shadows were elongated and the light was strange and a bit foreboding. The light was cast  gray and seemingly flat and low across the ground.  Not hazy, not overcast, but the light was a strange gray-blue, and very unlike Portland’s usual grays. I later learned that the blue-purple-gray hues we experienced were likely contributed by a Purkinje effect. The Purkinje effect is the tendency of the human eye to shift to the blue end of the light spectrum as light fades. Colors on the yellow, orange and red end of the light spectrum become even flatter and less pronounced. 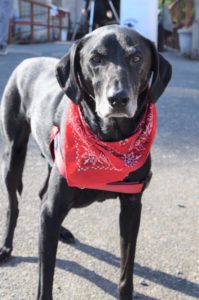 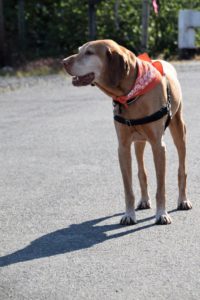 The air cooled. A few of us donned light jackets. The temperature, we estimated,  dropped 10 degrees, but temperature drops of as much as 17 degrees were reported in the area.

It’s not supposed to be dark outside at 10:17 in the morning, but the moment had come. Darkness descended quickly. Conversation mostly ceased, although there were plenty of exclamations and smiles and wonder. 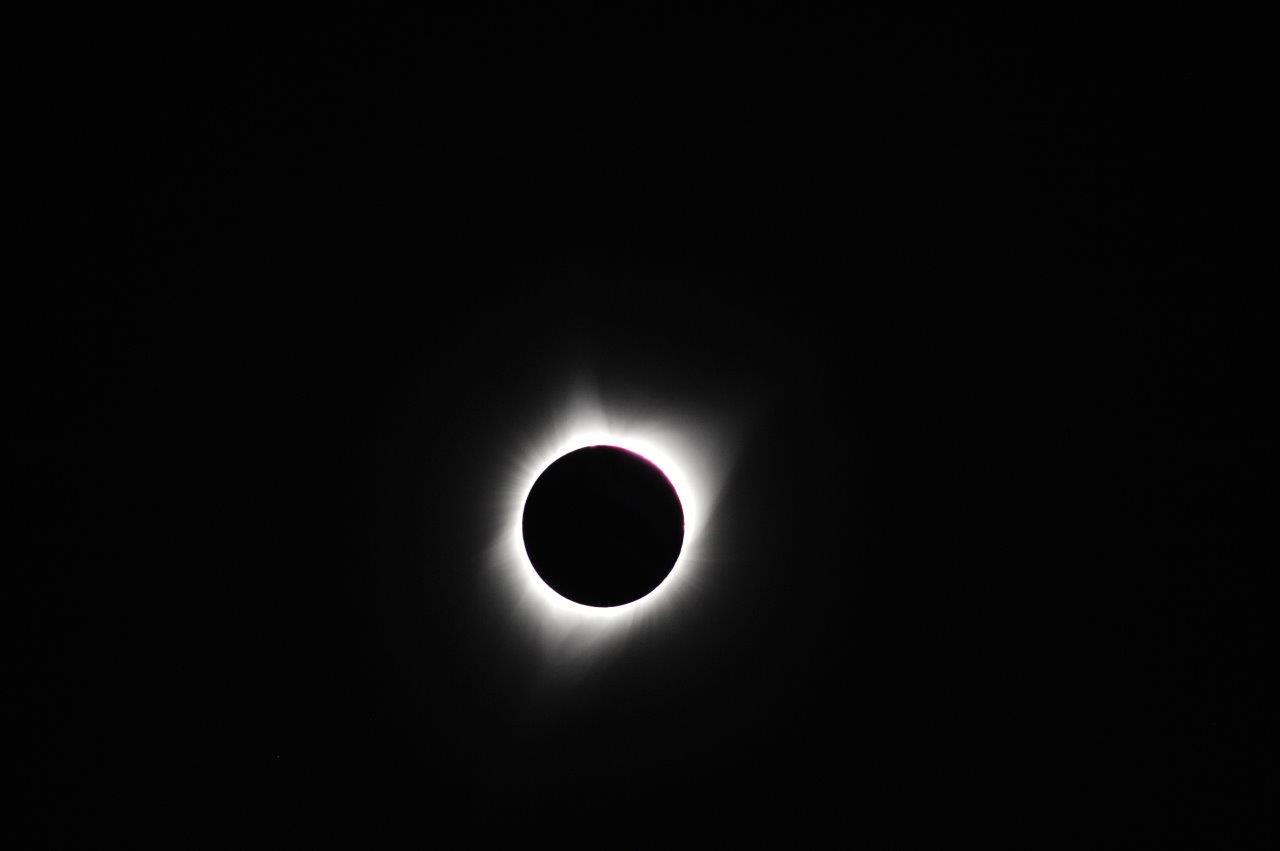 The corona at the time of the total eclipse. Photo by Mark Kronquist 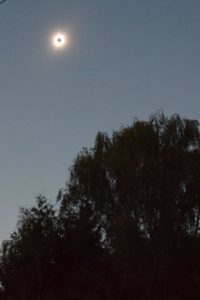 The moon covered the sun for 2 minutes, 1 second.

What a curiosity! It wasn’t quite night-time dark. It was more like early dawn, but still with those flat blue-gray tones rather than the yellow or oranges of a rising sun. The street lights went on and everything really did seem quiet. I wandered over to one of Stayton’s quiet downtown streets. 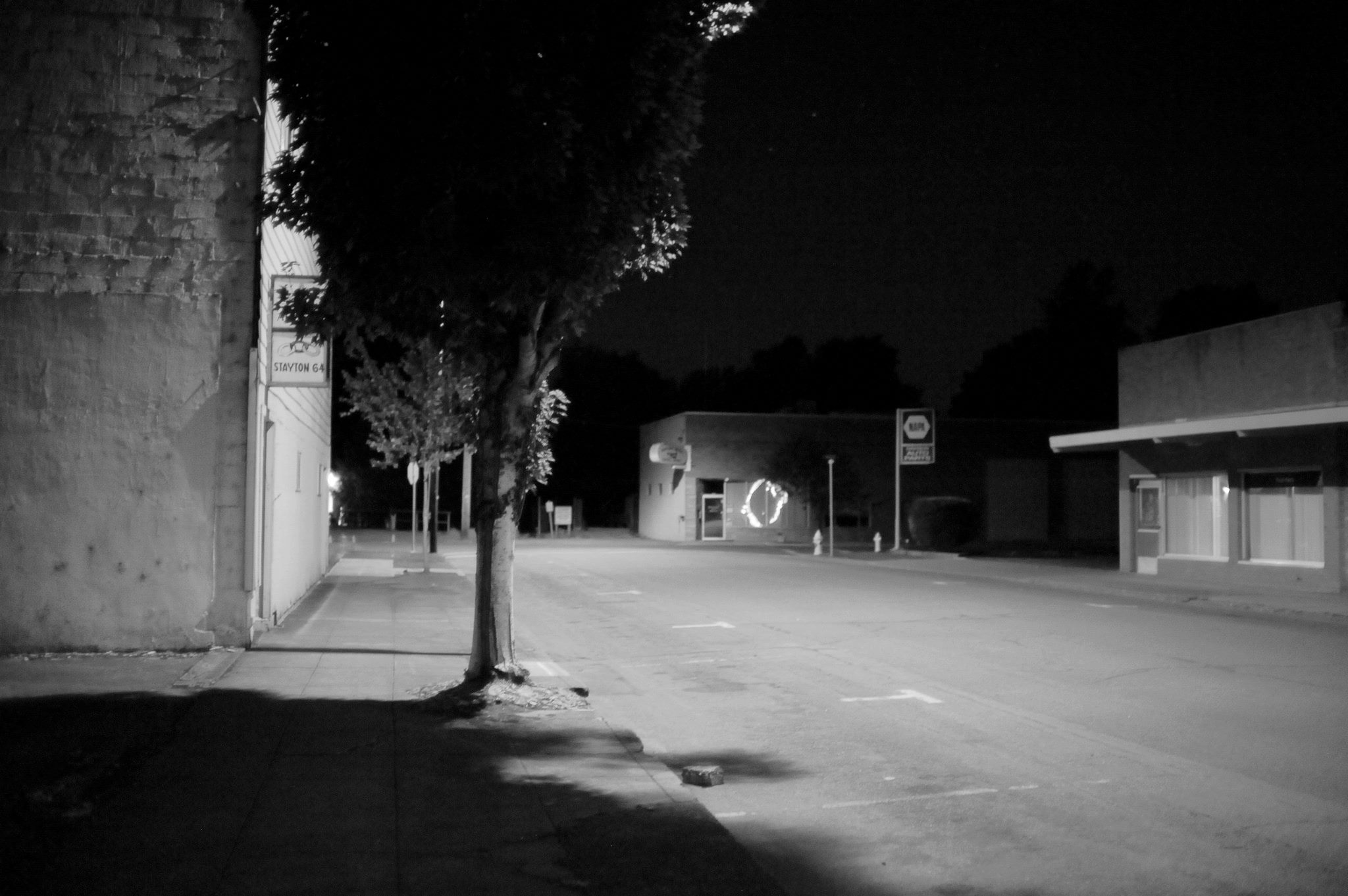 I thought about the people and the cultures that came long before us, those who had no way of predicting a solar eclipse or understanding it. The fear and confusion they must felt. The stories they came up with to make sense of it. We, of course, were free to marvel, observe and participate how we chose.

The moon began passing “down” to the left of the sun. We continued watching the progression through our glasses. While the tension of expectation was gone, it was interesting to watch until the very end. Susan popped a bottle of sparkling wine and we shared a toast. 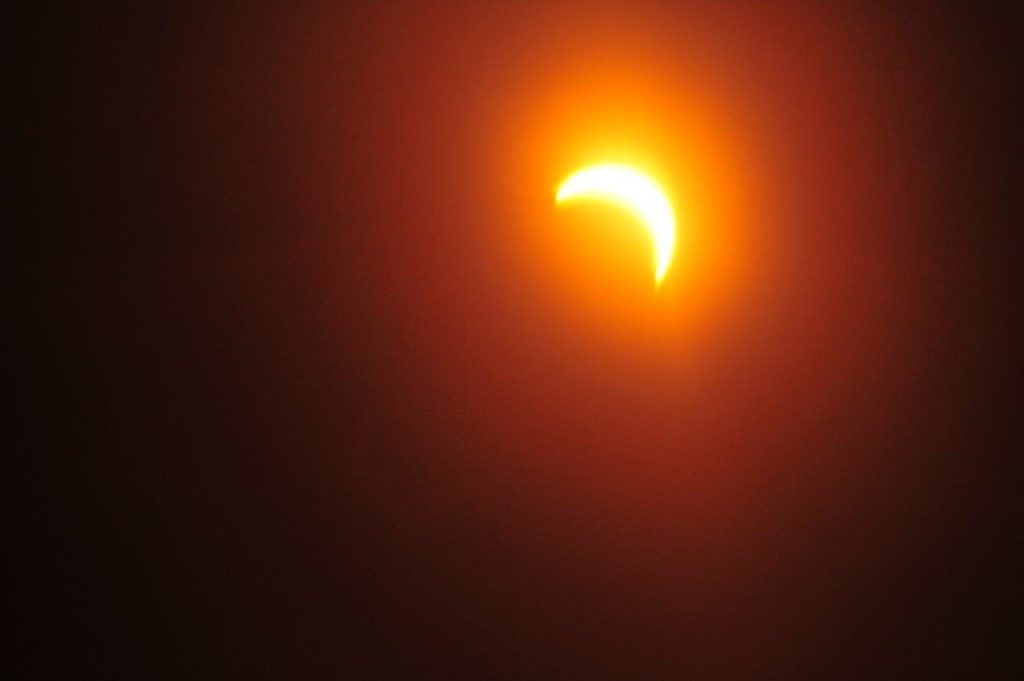 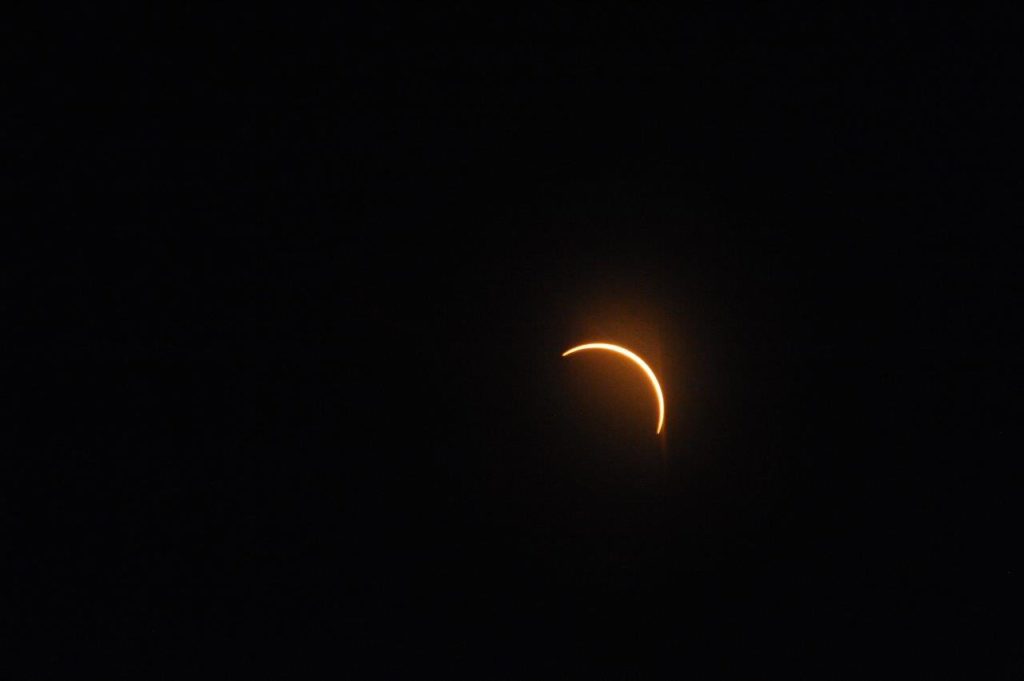 Knowing the world was not going to end, we were free to stop our regular routines and share this time with friends and family. My life wasn’t changed by the eclipse. Nothing profound occurred, except maybe the expected moment of feeling both insignificant and yet miraculous at the same time. (Which also happens all too regularly when I do mundane tasks like switch on lights in the house or run the hot water tap.) But it was truly a wonderful thing to see, and I enthusiastically say that if you have the chance, do make the effort.

Oh; the traffic? It was a three and a half hour trip back home. A small price to pay.

I’ll be there for the eclipse in 2024. Hope to see you there too. Bring a friend. 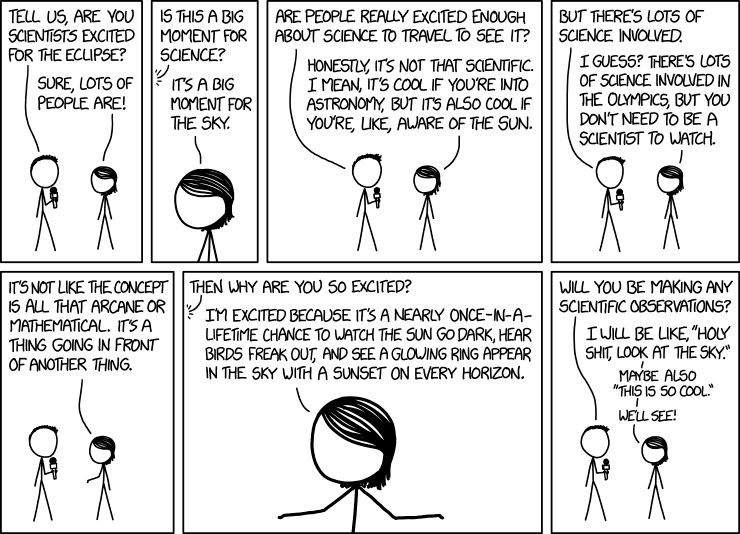 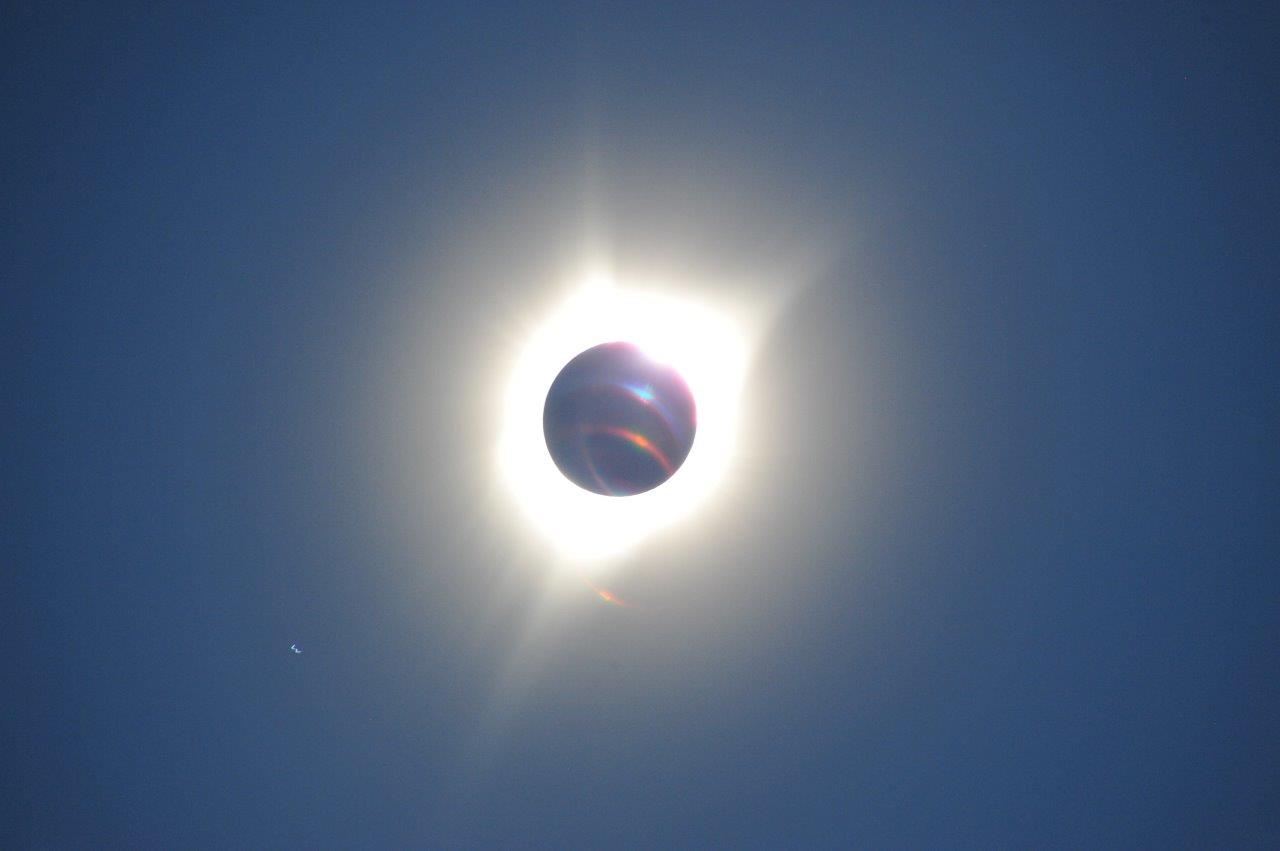 – Cover eclipse and other eclipse photos by Mark Kronquist. All other photos by Nancy Zaffaro, or as credited.