A Spontaneous Family Trip to Cuba

When we traveled to Cuba, our family of five had already spent five weeks in Ecuador and three in Panama. As a last leg of our trip, we booked tickets to Cuba via Panama City. We assumed we’d be able to navigate the country successfully once on the ground, as we had in Ecuador and Panama.

While still in Panama, I booked my family (our 11-year-old son and 9-year-old twins, a boy and girl, my husband and myself) into a Spanish school in Havana. The plan was to spend the first week with the school continuing our language development, learning a bit about Cuba, and then decide how to approach the remaining time.

While Cuba is an amazing country, there were many challenges to this impromptu trip. 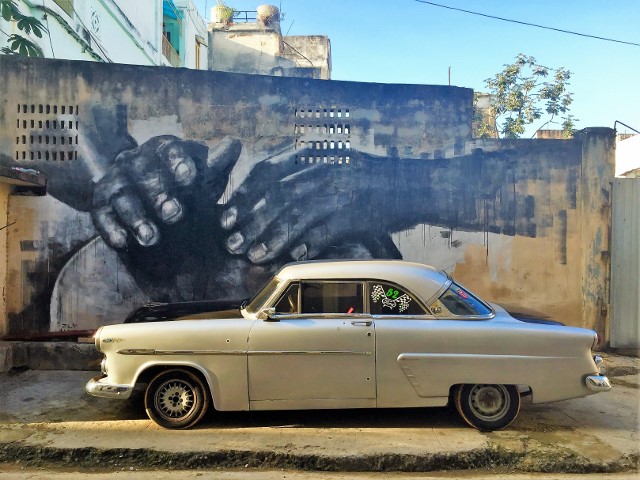 Mural in Havana with a ubiquitous antique auto. (All photos by Leyla Ballioglu except as noted.)

Our arrival into Havana and integration into the school was rocky. After waiting at the airport for the transport we were persuaded by the school to purchase “for our own safety,” we negotiated a ride to our casa particular. A casa particular is a common form of Cuban lodging where the traveler rents space in a private home.

Upon arrival, we were a surprise to our host. She was unprepared for us and tried to turn us away. When we said we had nowhere else to go, she enlisted a neighbor to put the apartment into order. They explained how to buy drinks from the refrigerator and dinner from them. I was instructed not to use the kitchen to cook independently. (Our dinner from them ended up being the best food we had in Cuba. We also loved the Cuban coffee that the “Grandma” took to delivering to us in the morning; small, strong, and with sugar.) 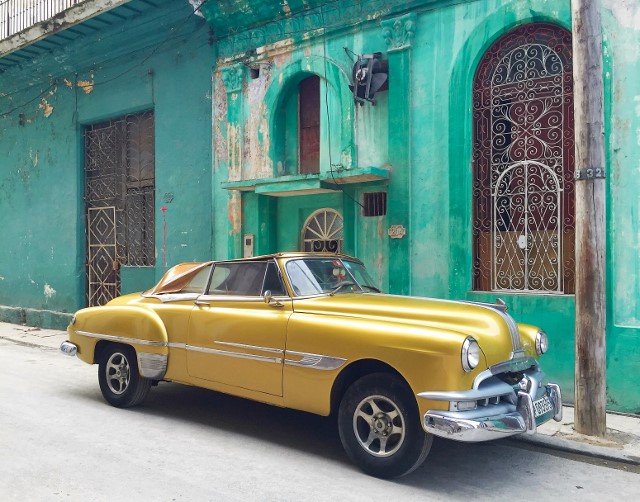 We settled into the two-bedroom apartment with Charlie Chaplin art dominating the walls. My hubby and I took a walk into the neighborhood to find food for our hungry kids, heading down the tree-lined residential street toward the main avenue.

We found one place selling pizza out of a window of a building, but the line was long and we went to a nearby store instead. Cigarettes, liquor, beer and candy were stocked, but the only food we could find was some white rolls. We bought two cold Cuban Cristal beers, and drank them on the sidewalk in front of the store while making small talk with a clerk eager to try out his English. 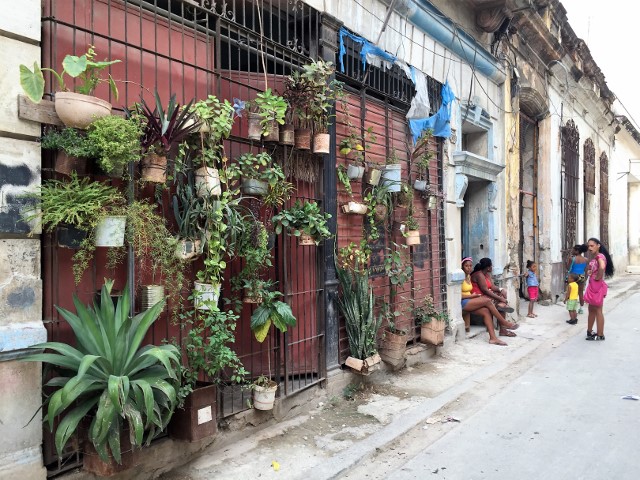 Later that evening, we learned the Spanish school wasn’t ready for us either and had to scramble to find instructors for the children. Fortunately, we were all in classes the next morning.

As part of their Spanish immersion classes, our children visited the zoo with their instructor, giving them a chance to see the conditions of a zoo in a developing nation. My class spent time discussing the complex history of U.S. and Cuban relations. My instructor was knowledgeable about politics in Cuba. One day she lectured our class, consisting of myself and four other Swiss and German students, about the impact of American policy on Cuban economy, repeatedly pointing at me every time she referred to “imperialist American policy.” 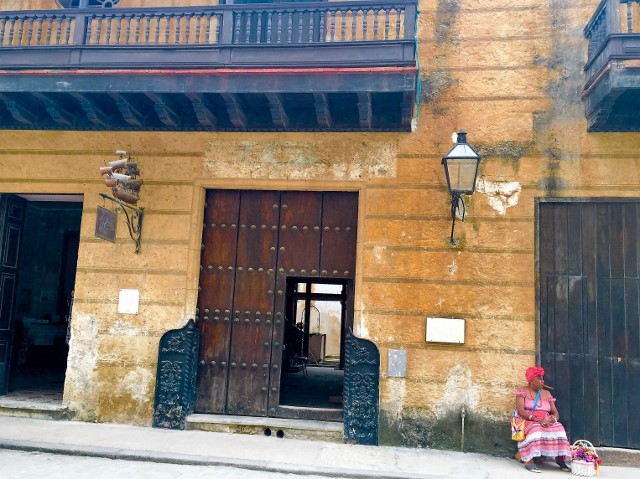 A street in Havana.

Touring the City of Havana

In the afternoons, we toured with the school. My husband’s instructor doubled as our tour guide.  We walked around Havana, learning about revolutionary history, and the many influences of the U.S. and Europe on Cuba’s development. 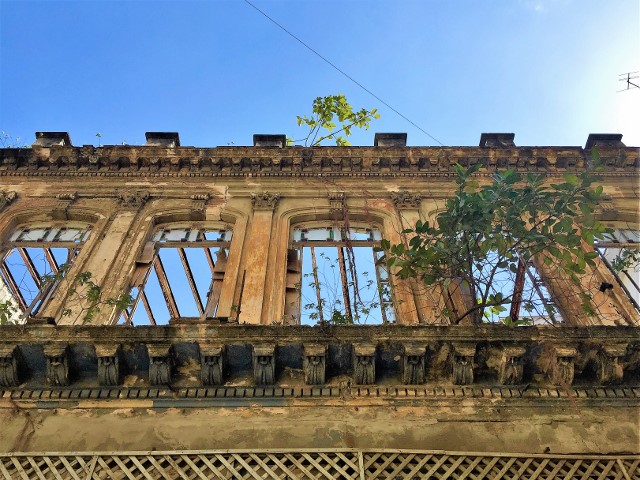 Change is coming to Cuba and buildings like this one may someday return to earlier glory. 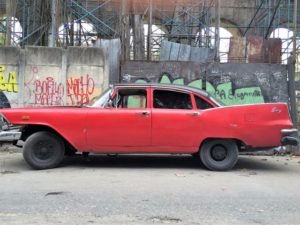 Our guide also spoke of Santería, a religion of Caribbean origin that also includes element of Catholicism, which developed from the Spanish slave trade in Cuba, and the role of superstition in the culture. We stopped at a very large ceiba tree, which originates in Africa and has spiritual significance to those who practice Santería. The tree was surrounded by a wooden plank, then a rod iron gate, preventing one from touching the tree. When we spotted what appeared to be the jaw bone of a large animal placed in a plastic bag by the roots of the tree, the instructor stated that someone likely offered it as a sacrifice. 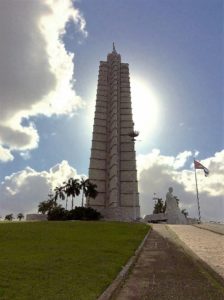 The guided tours of Havana were invaluable. We visited points of interest from the revolution, mostly the outside of buildings and significant courtyards and statues. Images and quotes of Fidel Castro and Che Guevara decorated most buildings. Billboards illustrated messages for the Cuban people; there were no advertisements anywhere. 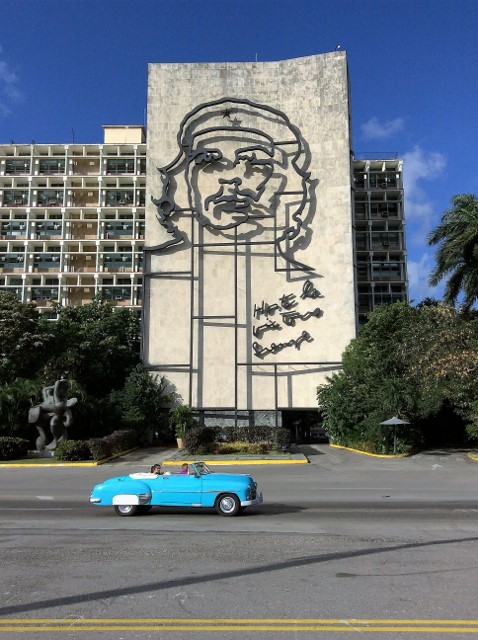 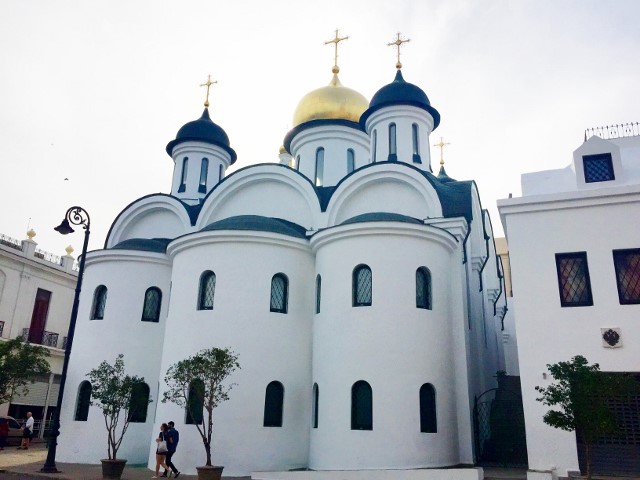 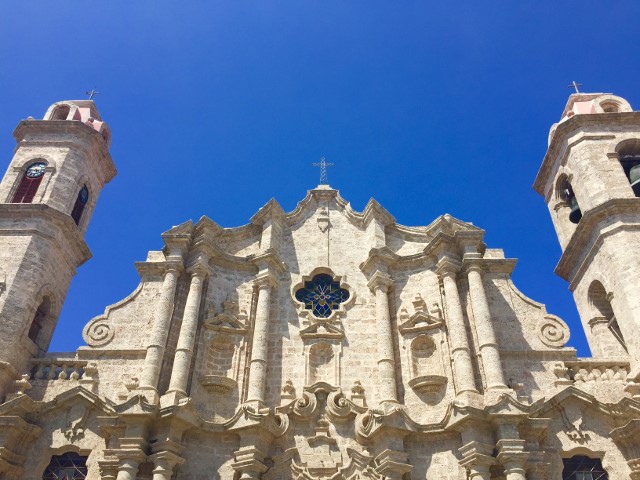 La Bodeguita del Media, where the first mojito is said to have been made.

Havana is known for artistic expression, live music and dancing. Traveling with three young children prevented us from enjoying nightlife other than a couple nights of dining out. During a daytime outing we visited the famous La Bodeguita del Medio, where Ernest Hemingway and other writers, artists and celebrities reportedly spent time listening to music and drinking. Here, at one of Havana’s most popular tourists spots, it’s traditional to write your name on the walls.  People on the streets here offered to take photos with tourists for a bit of cash, some in creative costumes. 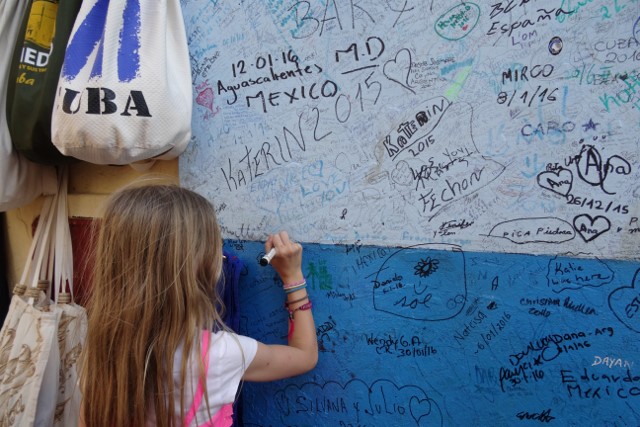 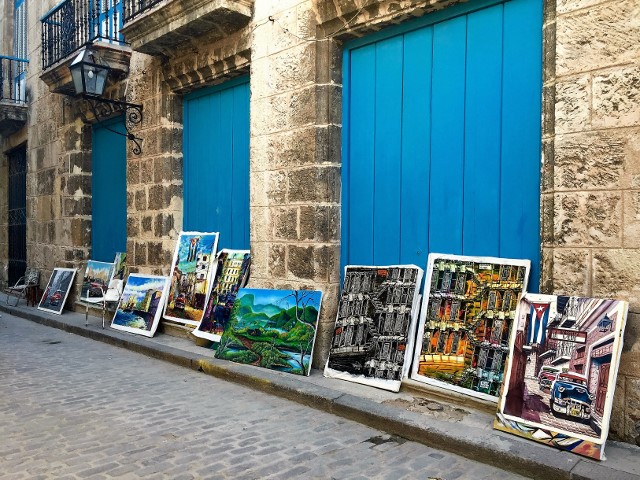 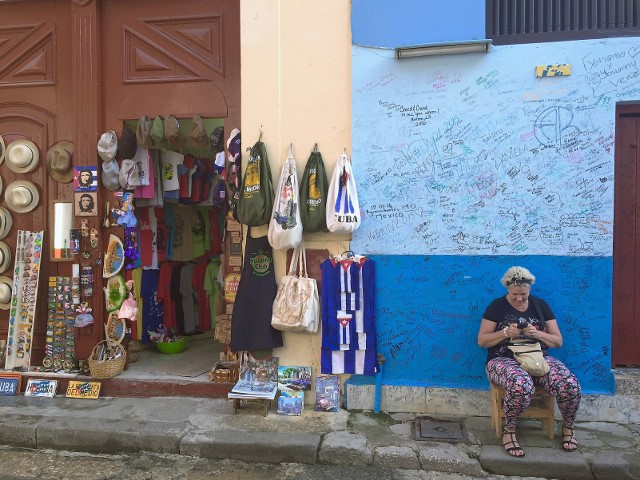 We spent our first weekend on a tour to the popular agricultural town of Viñales. 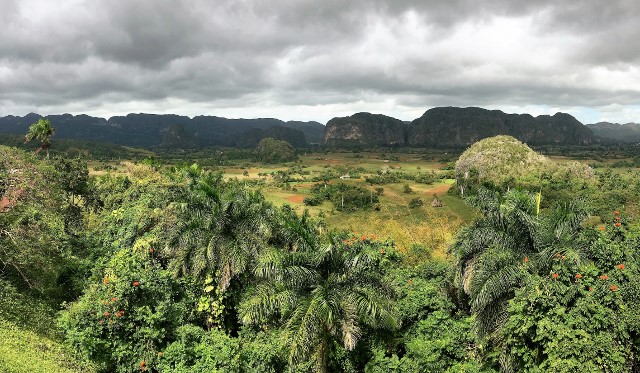 Viñales is a popular place to visit in north-central Cuba. 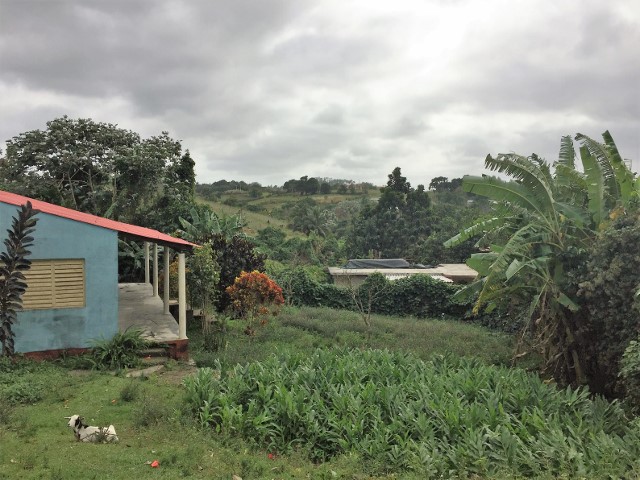 Our casa particular consisted of a couple of bedrooms in the back of a woman’s home. We visited a farm which raised rabbits and chickens and cultivated food using their manure and plows pulled by ox. 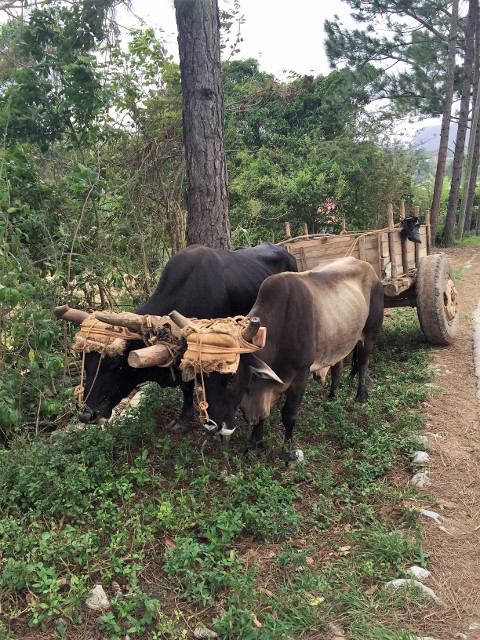 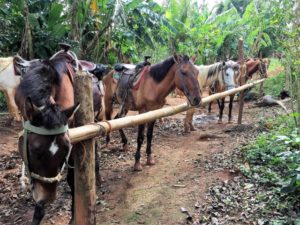 Horseback riding in Viñales was a highlight.

A highlight of Viñales was a horseback ride to a tobacco farm where we watched the farmer roll cigars and cut open coconuts with a machete before adding fresh squeezed orange juice and rum.

We bought his “tobacco libre,” the cigars he hand rolled with the 10% of tobacco that he was permitted to retain after giving 90% of production to the government. My husband and I discovered that it’s delicious to rub honey on the mouthpiece of a cigar before smoking it.

We trekked into a cave, following a quarter-mile of dark and uneven terrain to a deep blue pool of still water. 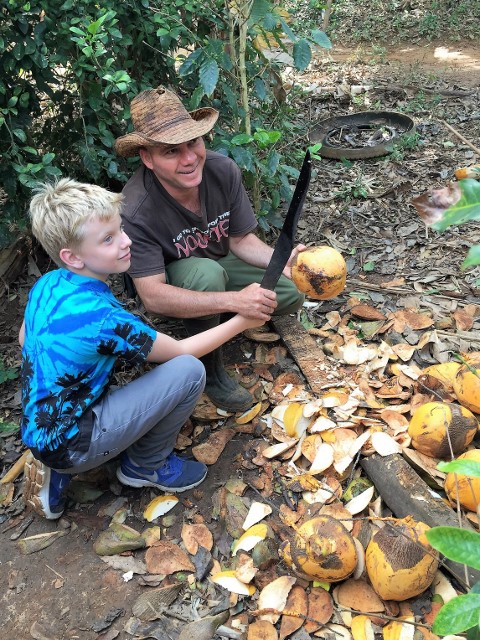 Cutting coconuts with a machete during a farm visit. 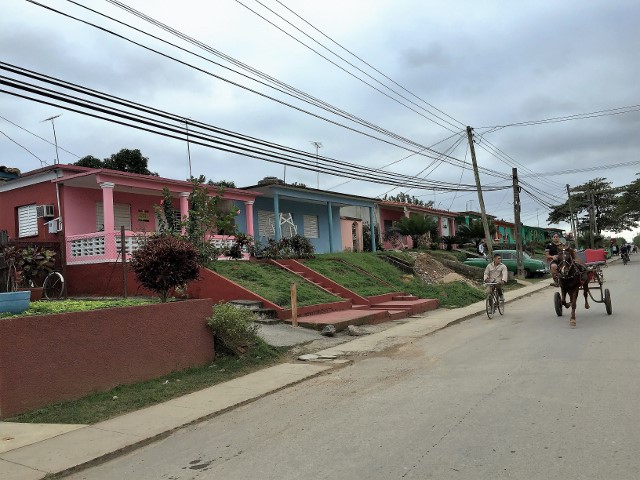 A street scene in Viñales. 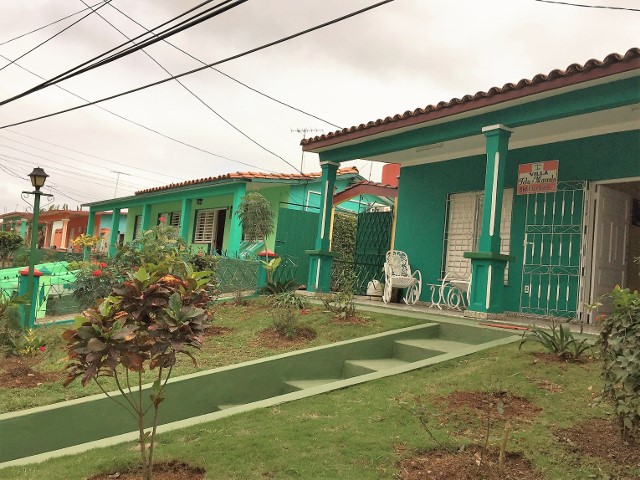 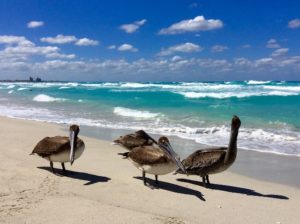 After a week of classes and our weekend trip to Viñales, we headed to the coastal resort area of Cayo Santa Maria, in the north central coastal region of Cuba. The beaches here were beautiful; the water a clear turquoise and the beach white sand.

We booked our beach resort stay through a travel agency located outside of Hotel Havana Libre (once known as the Havana Hilton.) The all-inclusive resort meant less decision-making and negotiating, but we regretted we wouldn’t be spending more time in neighborhoods.

We enjoyed a short catamaran ride, and the resort brought in some musicians that lit up the nighttime environment. The food, however, grew increasingly indigestible, and drinking and lounging by the pool were the primary activities. 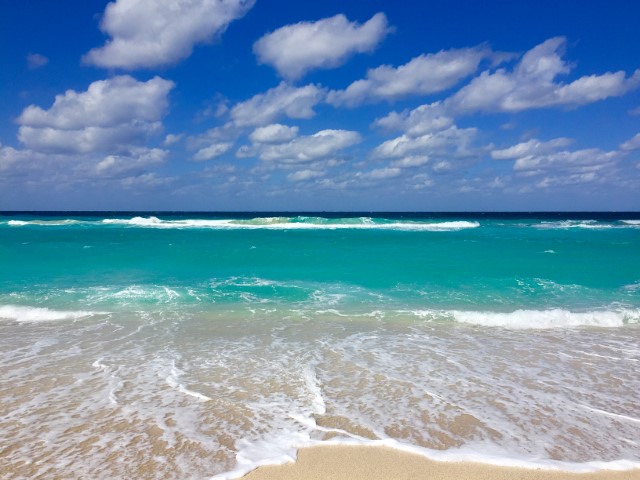 Independent travel in Cuba is a challenge for even the most experienced traveler. Hotel rooms were often overbooked. Internet was all but nonexistent. (In Central Havana, we found a city block where small groups of people were crowded. We bought a scratch-it card for $3 from a young person quietly claiming WiFi [pronounced “wee-fee.”] The cards reveal a pass code with about 16 digits, and after persisting through several failed attempts, we used excruciatingly slow internet while sitting in the heat on the concrete with dozens of other people. I was able to send an e-mail to family, but that was the extent of what I could accomplish. Visions of looking up bus schedules and researching towns dissipated.)

Finding bottled water, snacks and some basics was difficult throughout the trip. My daughter and some of the other students got quite sick on the food. We had to watch our cash because, of course, at this time, no American banks or credit card companies operate in Cuba.

What we found is that while many claim you should travel to Cuba before it changes with the onslaught of development and U.S. citizens, growth is likely to be slow and include growing pains. At this time, especially if you are traveling as a family, it’s still best to book an organized tour. 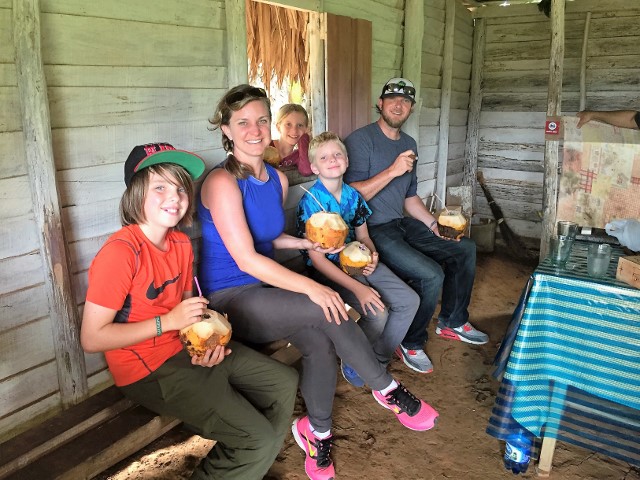 The author and her family in Viñales.

-All photos courtesy of Leyla Ballioglu, except as noted. Leyla, who befriended the author on this trip to Cuba, “travels the world whenever possible.”  She lives in Zuzwil, Switzerland.

Chelsea Martin is a Communication Coach and Organizational Development Consultant in independent practice. Learn more about her work at www.4cprofessionalcommunication.com. Chelsea travels with friends, family, or solo and has interest in Spanish and Latin American culture. She resides near Portland, Oregon.