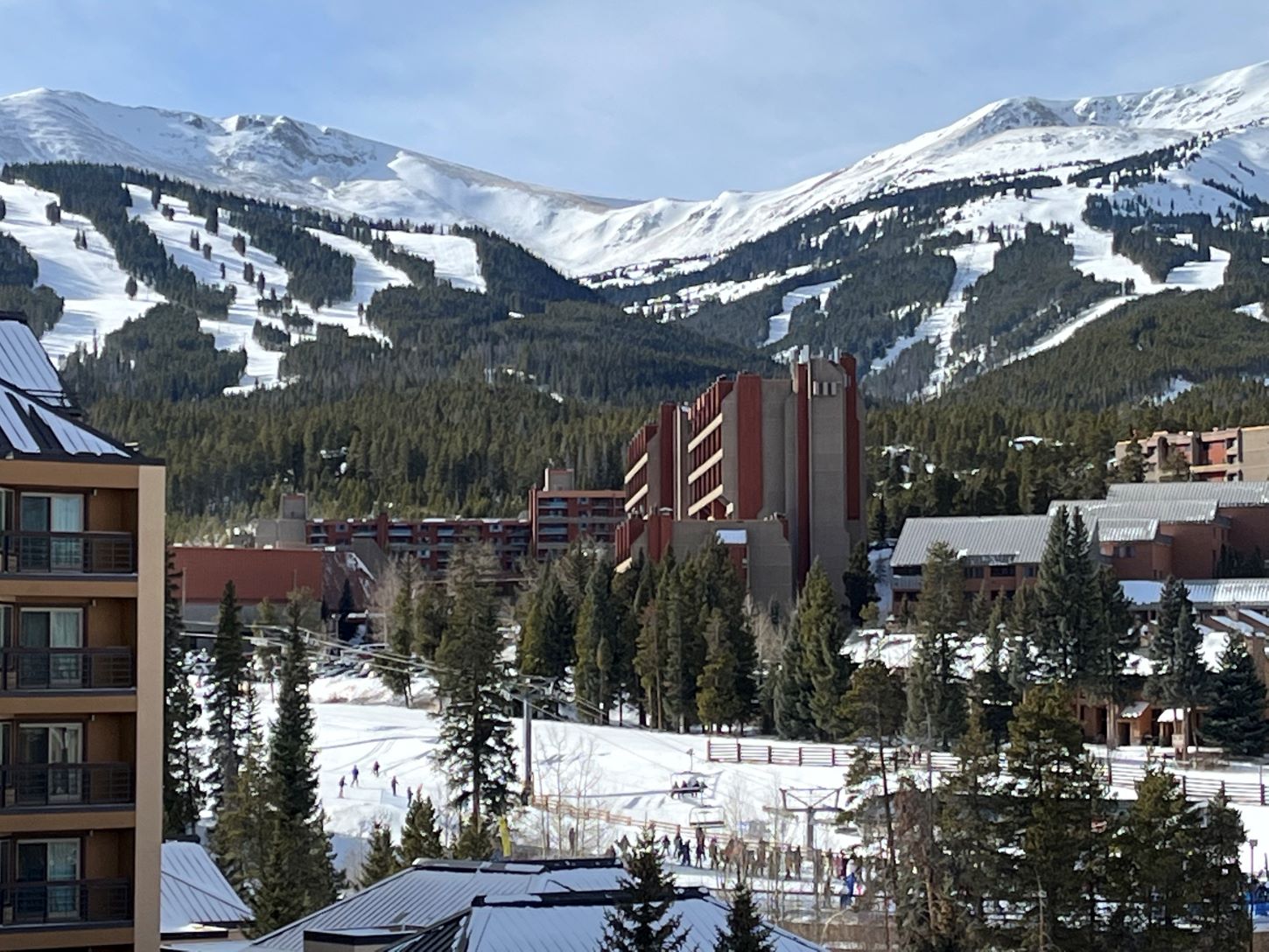 Look deeper. You will find that Breckenridge, Colorado is not all ski bums and T-shirt shops. It holds a history that tells fascinating stories for those, willing to listen. Complement that with an outstanding array of restaurants, and you will uncover a destination that the non-skier will revel in. No boots required. Breckenridge, Colorado is a destination to swoon over, and for non-skiers and skiers alike. 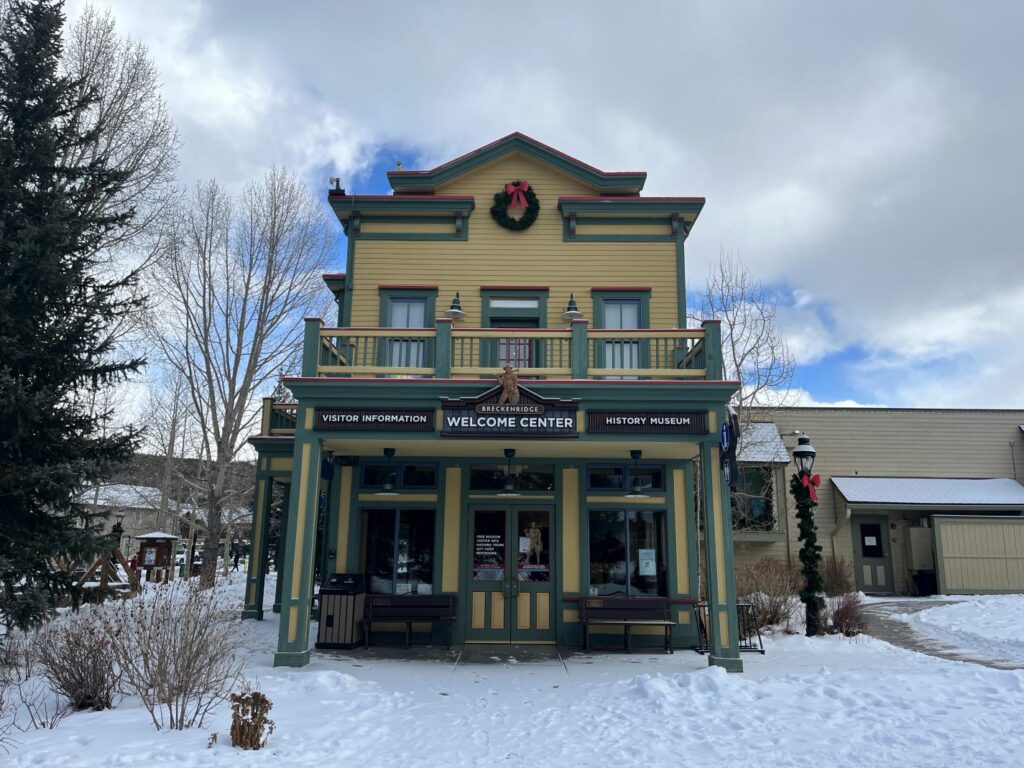 The Welcome Center in Breckenridge is much more than just a pitstop to pick up travel brochures, seek activity and restaurant tips, or make a restroom stop. Located at 203 S. Main Street, you will indeed walk by it at some point. Breck’s Visitors Welcome Center is home to two enjoyable exhibitions, one on the ski resort and one on the town itself.

I’m not the only one entering a new decade. Breckenridge Ski Resort turned 60 years old in 2021. A new exhibit, “60 Years of History in 60 Objects,” provides a great understanding of how Breck came to be, the major players, and all the quirkiness along the way since opening day December 16, 1961. Find it on the second floor of the Welcome Center.

The non-linear display highlights Breck’s memorable moments, such as when the newly named Peak 8 Ski Area became home to Chairlift No. 1. An all-day adult lift ticket would set you back $4, and a complete rental of skis, poles, and boots was a whopping $3.50. The local dynamic-duo of Sigurd Rockne and Trygve Berge, themselves competitors at the 1956 Olympics, ran the ski school. Relax après at “the Bergie.” 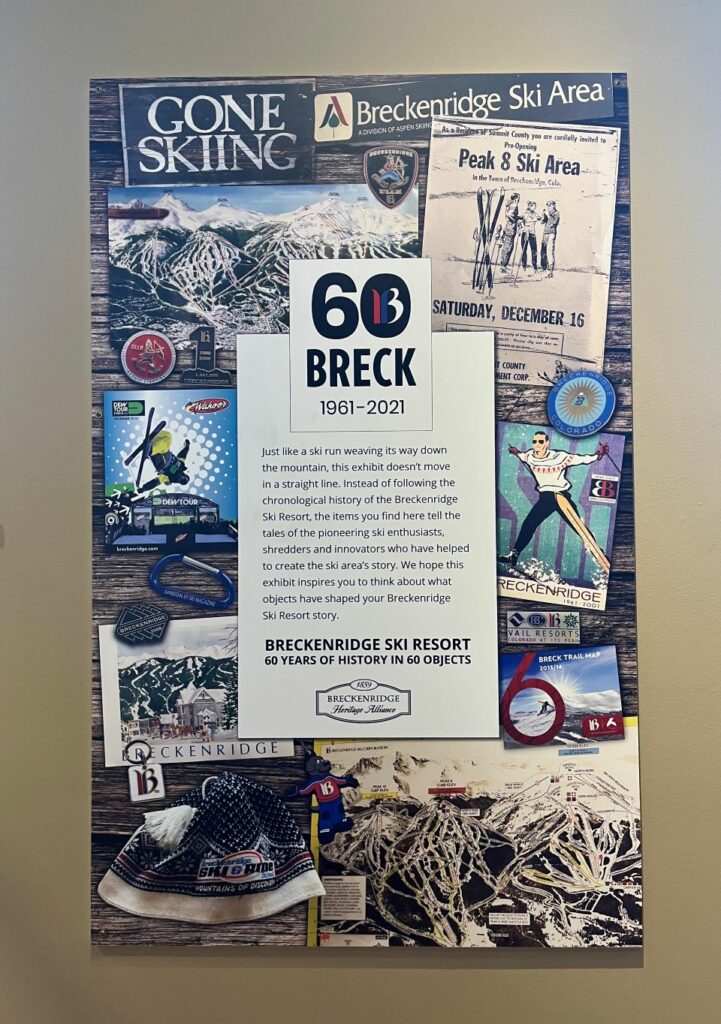 Other amusing visuals include a “Tooth Fairy” costume, a video of ski ballet from the 1980s, an aerodynamic speed skiing helmet worn by local legend C.J “Crazy John” Mueller, the first person to top 130 miles per hour, and a collection of uniform jackets.

Breckenridge welcomed bad-boy snowboarders on its slopes during the 1984-85 season, teasing them with dedicated terrain, one of the first half-pipes, and hosting competitions. Check out the photo of the “Flying Tomato from California,” otherwise known as Shaun White, snatching first place away from local favorite Steve Fisher in the 2007 U.S. Snowboard Grand Prix.

The first floor of the Welcome Center indulges history buffs with the story of the town itself way before the skiing started. It explores Breckenridge’s humble beginnings as a mining camp with stories such as “Tom’s Baby.” It describes the duality of “prim and proper” versus “rough and ready” faced by both men and women. An early American travel writer, Bayard Taylor, coined the town “hell on wheels.” Others paint Breckenridge as grimy, muddy, loud, and unruly. The exhibit traces through the boom, bust, and boom again cycle due to the new California invention of hydraulic mining in the early 1870s.

Bricks were too expensive because of the town’s remote location. Thus, wood became the primary material to build Breckenridge. Many of these original structures still stand and have been repurposed into office buildings, retail stores, or restaurants and preserved under the Breckenridge Historic District. Grab a brochure and head out for an excellent self-guided walking tour.

Across the street from the Welcome Center at 111 E. Washington Avenue, you will find the Barney Ford Museum. The house is a delightful Victorian residence constructed in 1882 with the finest materials. Listen to one of the volunteer docents—perhaps Bob Hoppin will be on duty—tell the inspiring story of Barney Lancelot Ford.

Barney was a slave. Born in Virginia in 1822 to a slave and a white plantation owner, his father would not claim him. Despite these hardships, Barney learned to read and write growing up in South Carolina. Working on a Mississippi Riverboat one day in his mid-20’s, Barney seized an opportunity to escape slavery and fled to Chicago. There he chose the last name of Ford upon seeing a Lancelot Ford automobile and met his wife Julia, who also had one parent, a slave, although she was born into freedom. The couple eventually settled in Colorado.

Barney became a thriving entrepreneur in the hospitality industry. His luxurious Inter-Ocean Hotel in Denver that sat prominently at 16th and Blake, and the Ford Restaurant and Chop House in Breckenridge are two of his most notable accomplishments. More importantly, he was an activist who fought to end racial discrimination and gain African American civil rights. He worked to educate black men and women. He even lobbied the U.S. Senate in Washington, DC, for the right to vote and became the first African American man to serve on a U.S. Grand Jury.

Leaving the Barney Ford House, continue up Washington and make a left on Ridge. You will arrive at the Edwin Carter Discovery Center at 111 N. Ridge Street in a block and a half. 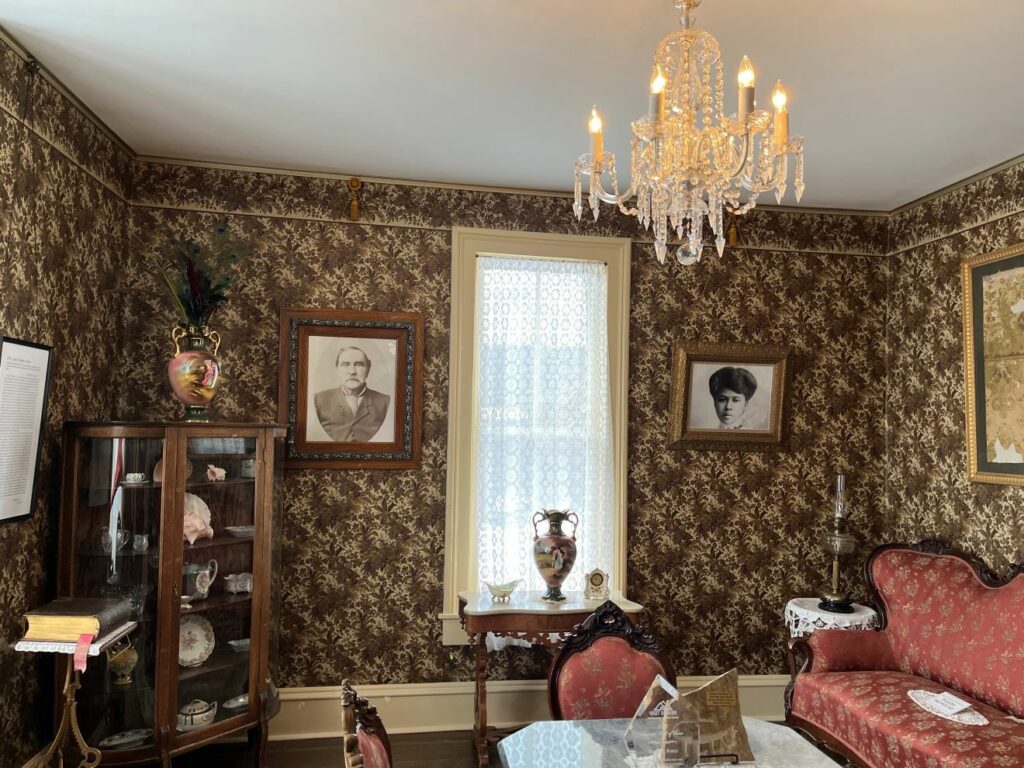 Edwin Carter is another prominent historical figure in Breckenridge’s history, impacting the early wildlife conservation and preservation movement. A New York hunter, a young Edwin was fascinated by the rugged outdoors and the opportunities the West offered. Nature attracted him, as well as the discovery of gold in Colorado.

Settling in Breckenridge in 1868, Carter soon became financially wealthy due to the new, efficient hydraulic mining system. However, he realized the toll that mining was having on the environment over time. The animals were suffering birth defects and death. The devastation on the land caused Carter a shift in consciousness, and he decided to stop further mining.

His interest in naturalism increased, and he honed his skills as a worldwide premier taxidermist. He decided to catalog and preserve each animal he encountered. His log cabin museum, built by himself, opened in 1875. For the first time, people could see a bear or a mountain lion up close. His collection of Rocky Mountain fauna is preserved in incredible condition.

Fascinating stories, indeed, but when all that storytelling starts to make your stomach growl, you have several quality options to consider. 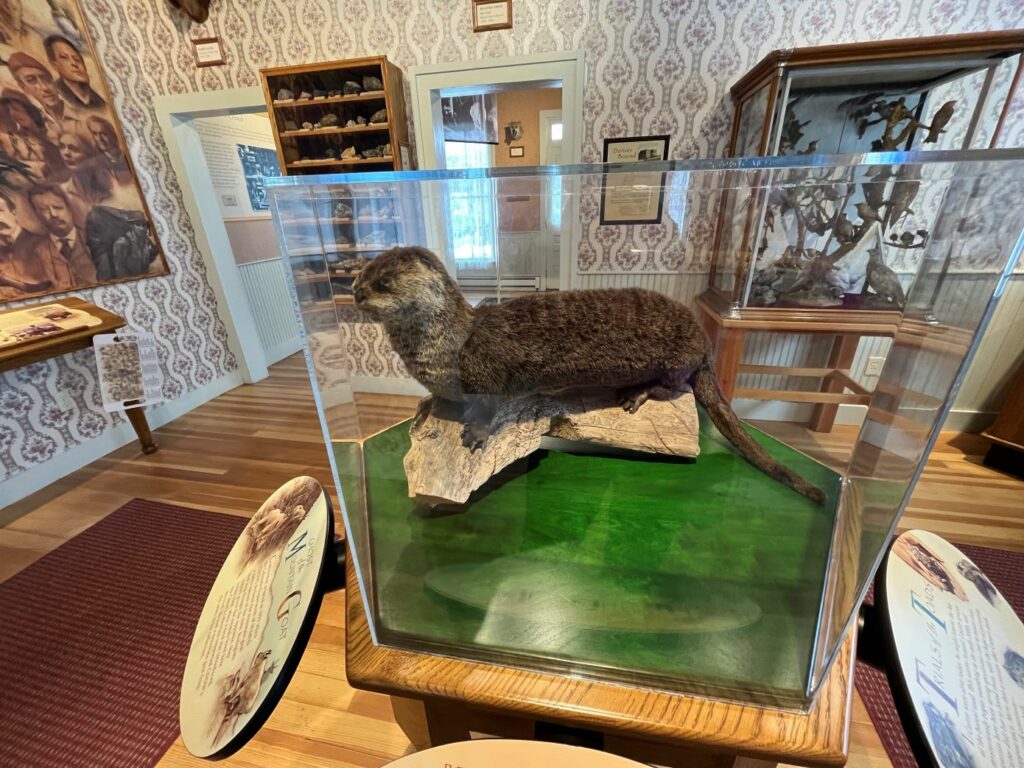 There are so many wonderful paces to eat in Breckenridge.

Located at the northern end of Main Street, Blue River Bistro is the closest to the Breck Gondola. It offers dependable American fare for breakfast, brunch, lunch, and dinner in a modern setting with limited outdoor dining. 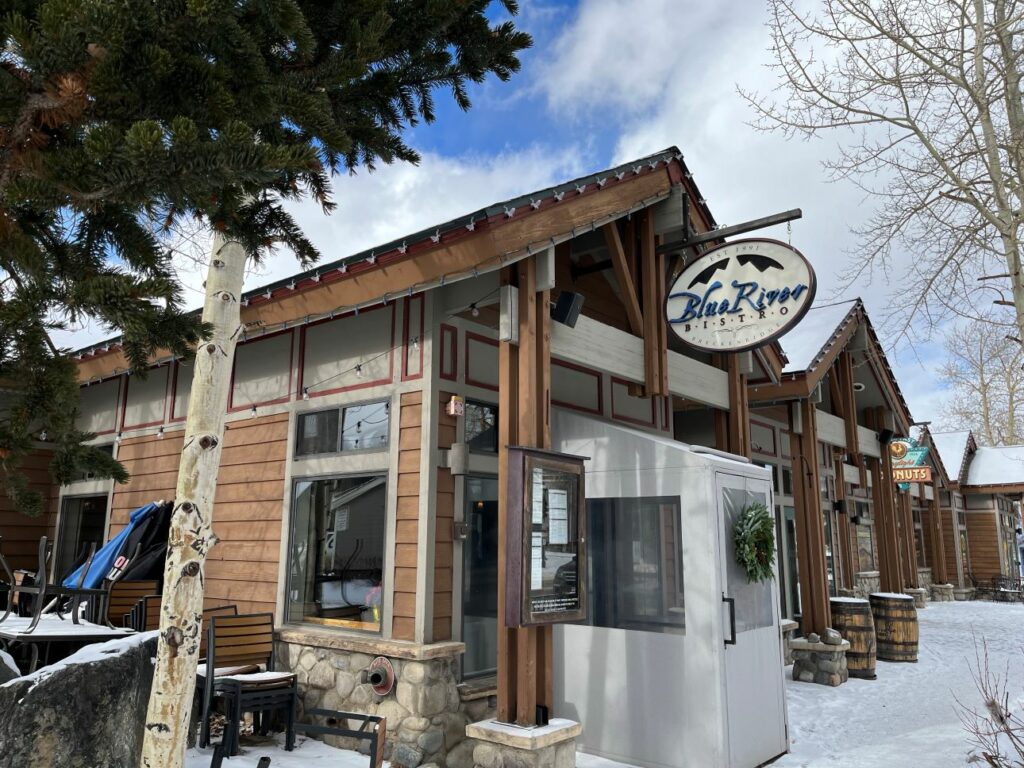 If you love meat, this is the place for you. Named after a silver mine, Briar Rose serves a delicious selection of beef and wild game, highlighting the best of the Rocky Mountain region. Choose from traditional sides and sauces. The cozy dining area faces Lincoln Avenue and is reminiscent of the prim and proper homes dotting the settlement in the 1800s.

Tip: Not feeling formal? No problem. Slip into the secret back saloon. The bar menu features a more casual selection of options, including Cajun beef filet tips, a charcuterie platter, and Pow Pow Shrimp. Stop by for Happy Hour and snag a $5 Negroni. 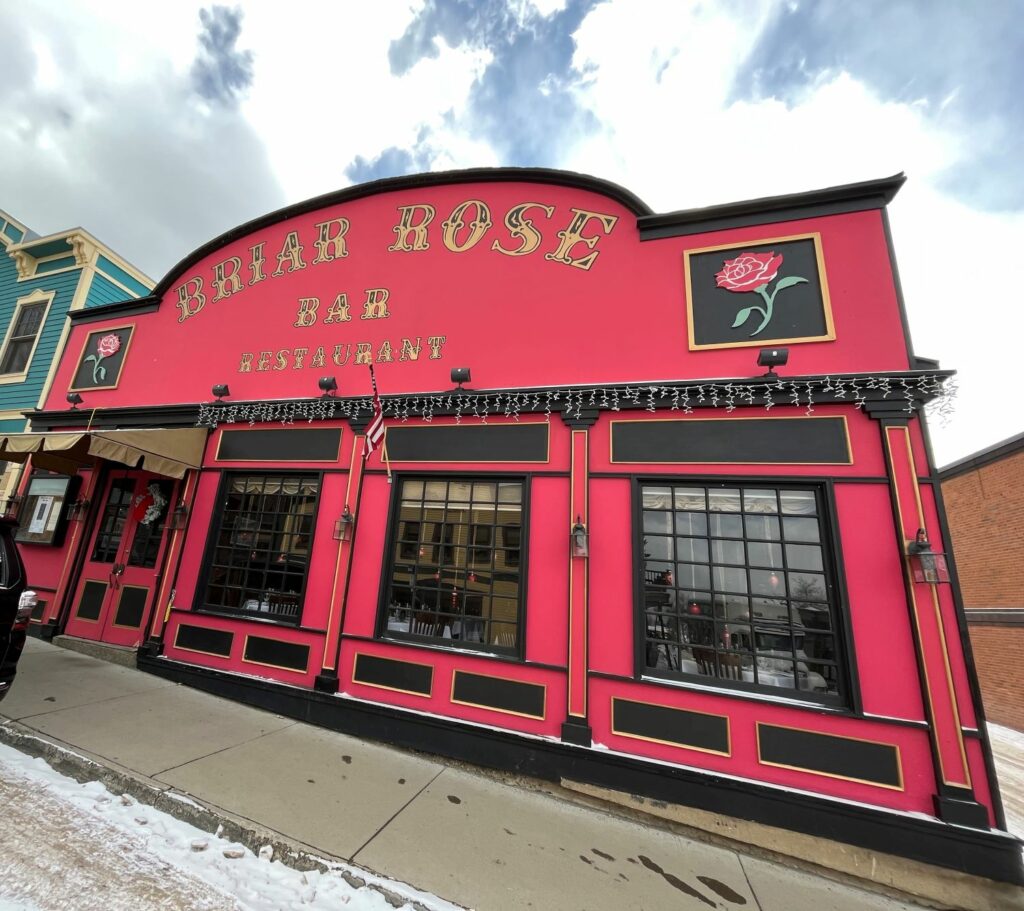 The newest player in the area, Cabin Juice, opened mid-December 2019. It is located inside the new Gravity House Breck hotel at the southern end of town, close to the Quicksilver SuperChair, at the base of Peak 9. Open for breakfast, lunch, and dinner; the restaurant is quite spacious inside. Choose from tables, booths, the long bar, or relax in one of the cozy chair areas. You can even claim your own chairlift or snow cabana.

Breakfast and lunch are reasonably priced, and the service is outstanding. The Brecky is a breakfast sandwich made with your choice of egg preparation, bacon, and greens on a pillowy bun. Unravel Coffee on the first level offers a Grab and Go for those anxious to hit the slopes. 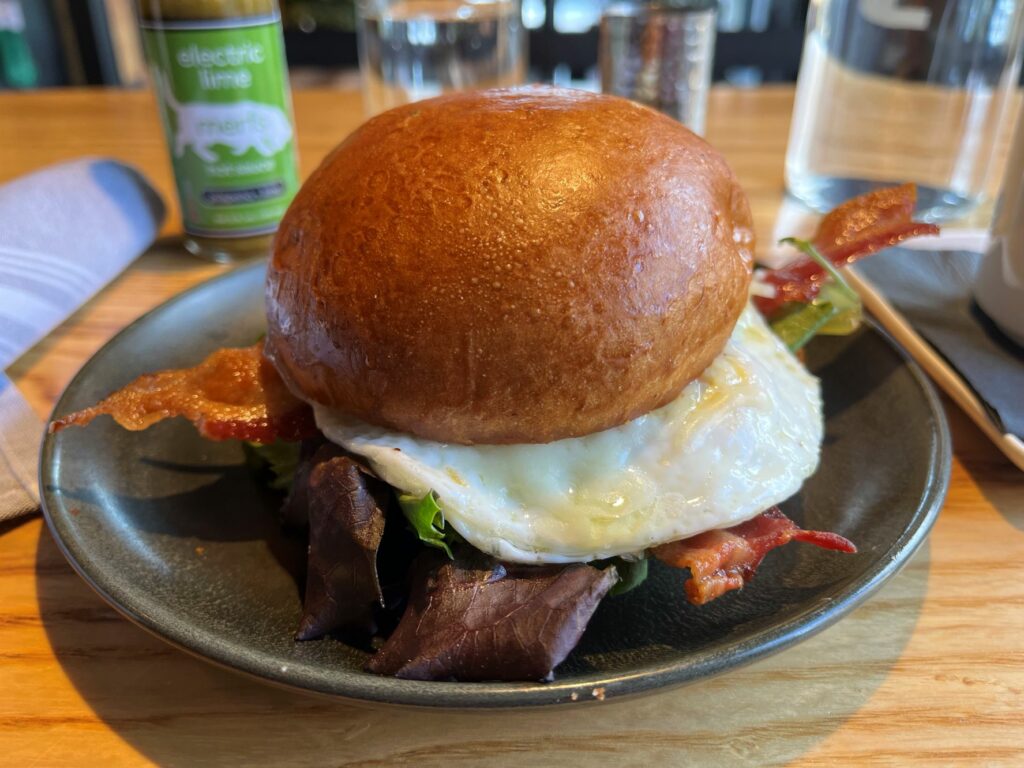 The Hearthstone is just the restaurant to complement the day listening to frontier adventure. Once the Kaiser family home in the 1800s, the ambiance feels like coming home to mom’s house for dinner. The house has that lived-in feeling with its antique wallpaper and flowery carpets. You will find the tiny six-person bar wedged in on the second floor. The Hearthstone remains one of Breck’s top go-to restaurants. Plan ahead to procure the coveted circle table by the window. 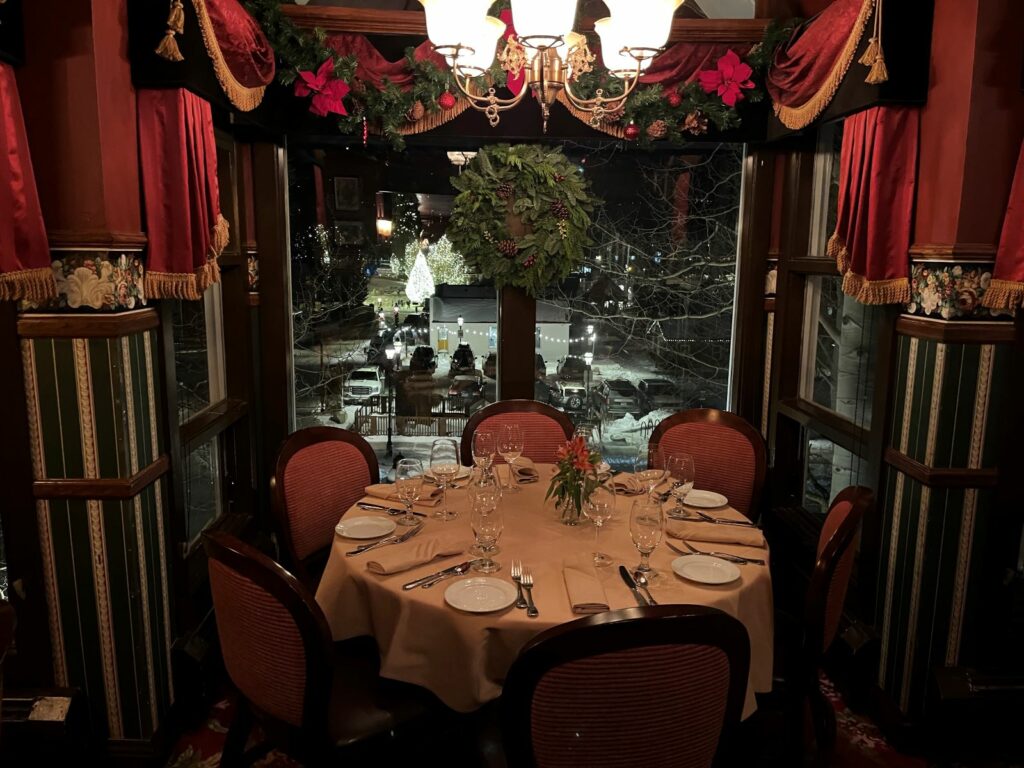 A window table at the Hearthstone (Photo by Joanne Galko)

The menu features American dishes with their signature garlic-crusted Elk chop served with a Marion blackberry demi-glace. A delicious alternative is the coffee-marinated Short Ribs simmered with anise and cinnamon served with collard greens and gruyere cheddar grits. Feeling adventurous for dessert? Try The Elvis—an unusual concoction of banana cake and peanut butter mousse accompanied by a crystallized banana slice. The Elvis is the kind of dessert you either love or hate. Guess it depends on if you’re a lover of peanut butter. 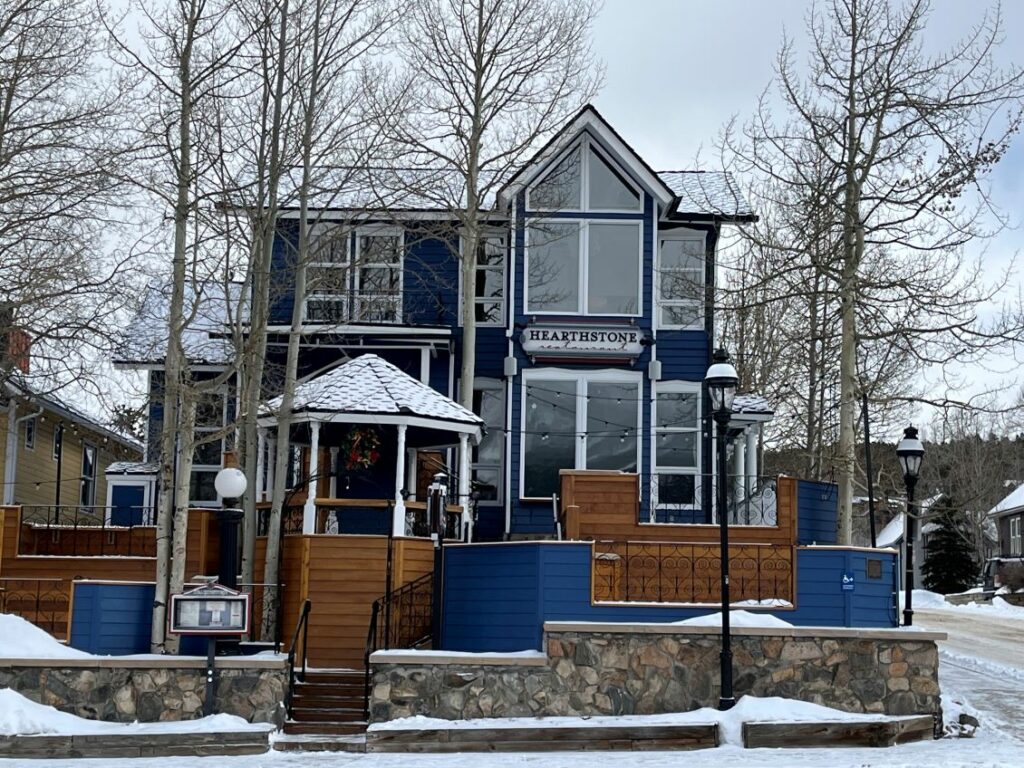 You can’t go wrong with anything on the menu. Chicken Parmigiana comes steamy hot. Can’t decide? Michaels makes it easy by offering a half and a half of your choosing. 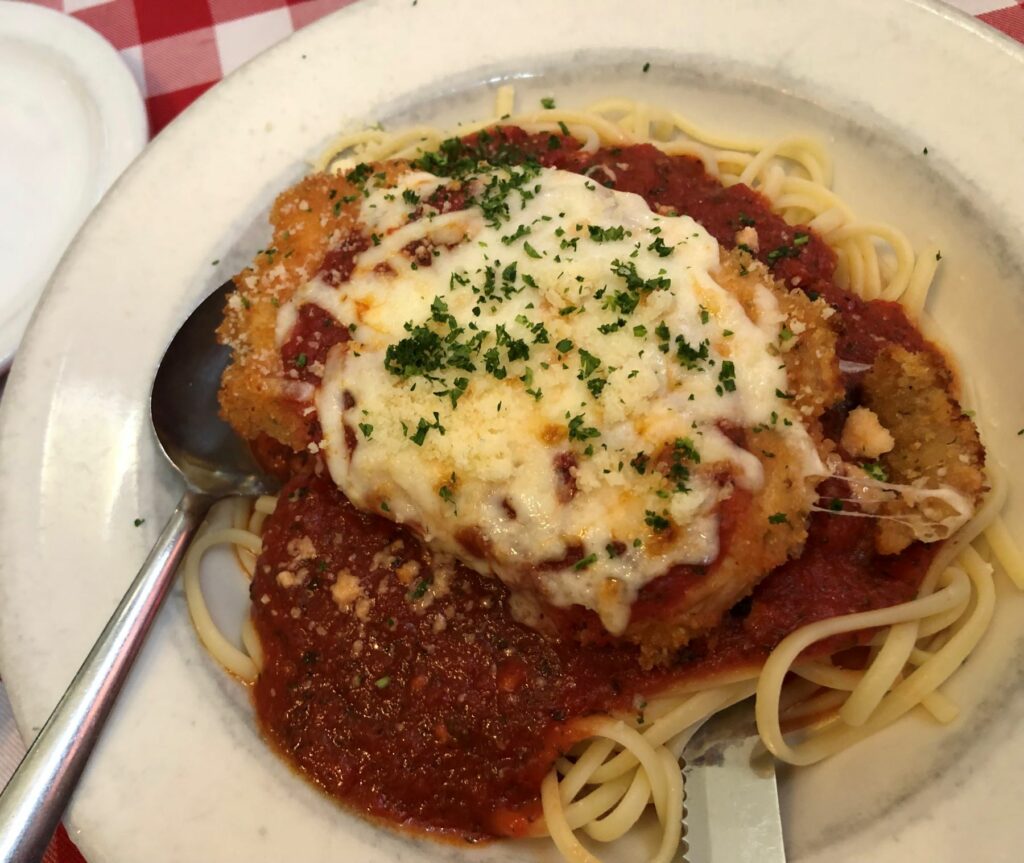 Situated in the heart of downtown at 113 S. Main Street, Modis appeared on the scene in 2007, bringing contemporary haute cuisine to Breckenridge. The cozy, curvy bar opens for Happy Hour at 3p serving modern comfort food with innovative preparations. Ramen with braised lamb and veggies is always a crowd favorite. Full-service dining opens at 5p for both the first and second floors. 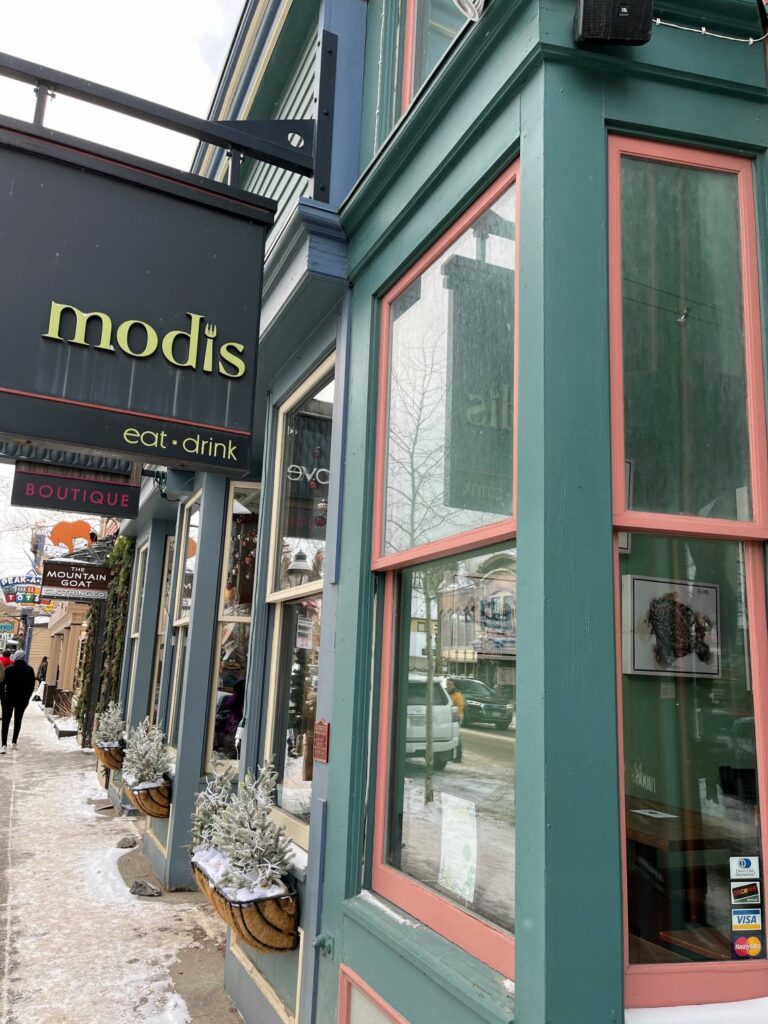 Modis is a favorite in Breckenridge (Photo by Joanne Galko)

For a meal to top every meal, book yourself a seat a Rootstalk and indulge in their 5- or 7-course tasting menu. Go ahead. Treat yourself to the wine pairing as well. Allow about two hours to be dazzled by chef-inspired course after course at this foodie haven. From samples of the main menu to individually inspired creations, be ready for surprises such as a mouth-watering smoked mole sauce prepared from the chef’s grandmother’s recipe. 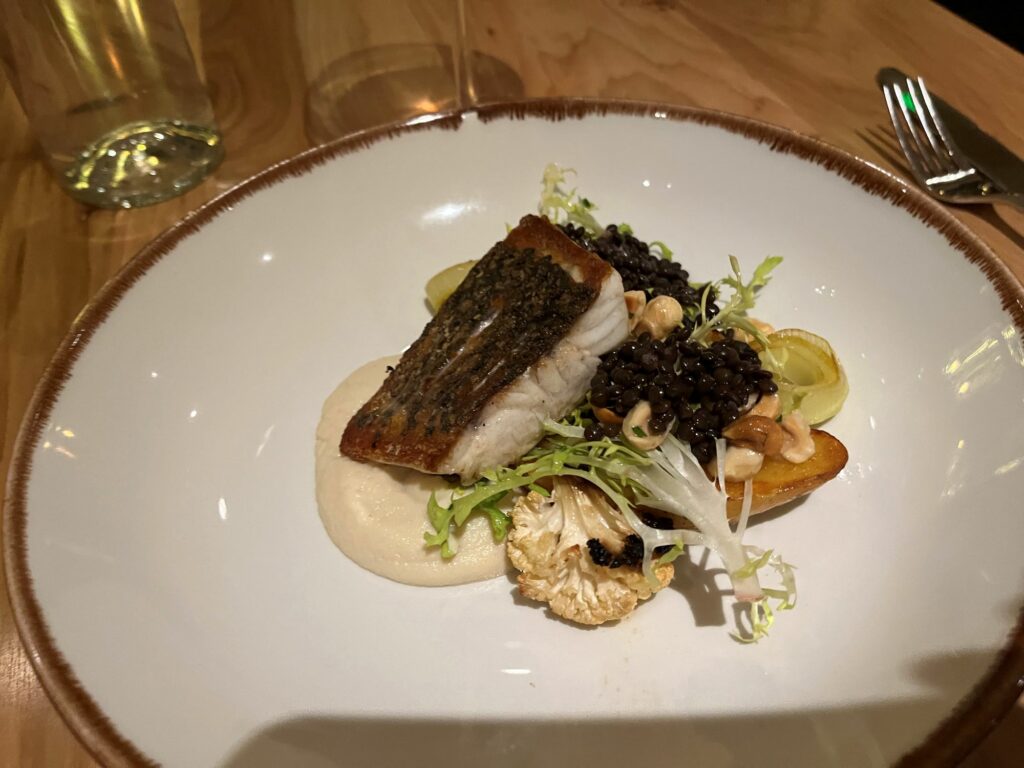 A delicious sea bass at Rootstalk (Photo by Joanne Galko)

The main menu offers a selection of exquisitely prepared appetizers and entrees, such as the braised rabbit pot pie. On top of excellent service, sommeliers Maggie and Madison know their craft well and are incredibly willing to discuss the delicate intricacies of wine regions worldwide.

Located at 207 N. Main Street, the 1889 Victorian home is open and airy inside with table seating, a nice-size bar, and a cozy brick-walled room on the lower level. 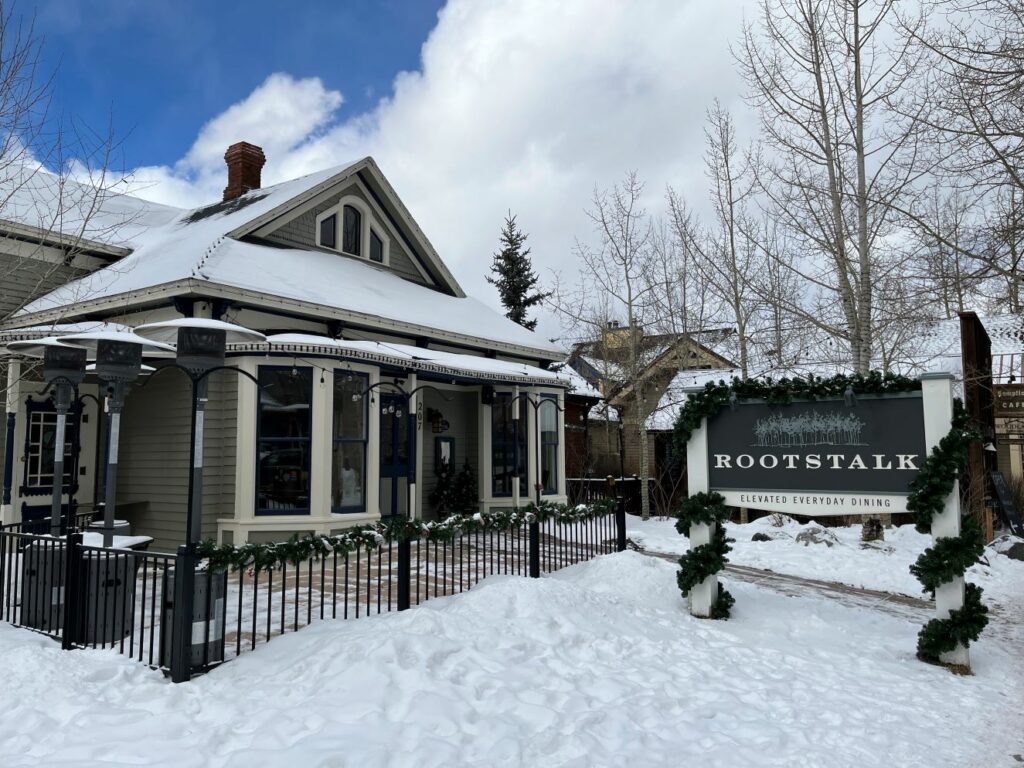 Why Are You Waiting?

As you can see, Breckenridge is not just ski bums and T-shirt shops. It is full of vibrant energy in both winter and summer. It offers meaningful experiences that will get you thinking about what frontier life was like and make you appreciate what Breckenridge has evolved into today. History lovers, activists, environmentalists, and, of course, foodies can delight both day and night. No boots required.

Joanne Galko is a freelance travel writer and explorer craving new experiences, whether it’s a destination, activity, or different hair color. Having visited over 30 countries, she loves learning about world cultures and all things ethnic. Joanne makes her home in Colorado’s Front Range.