A Historic Getaway in Durango Colorado 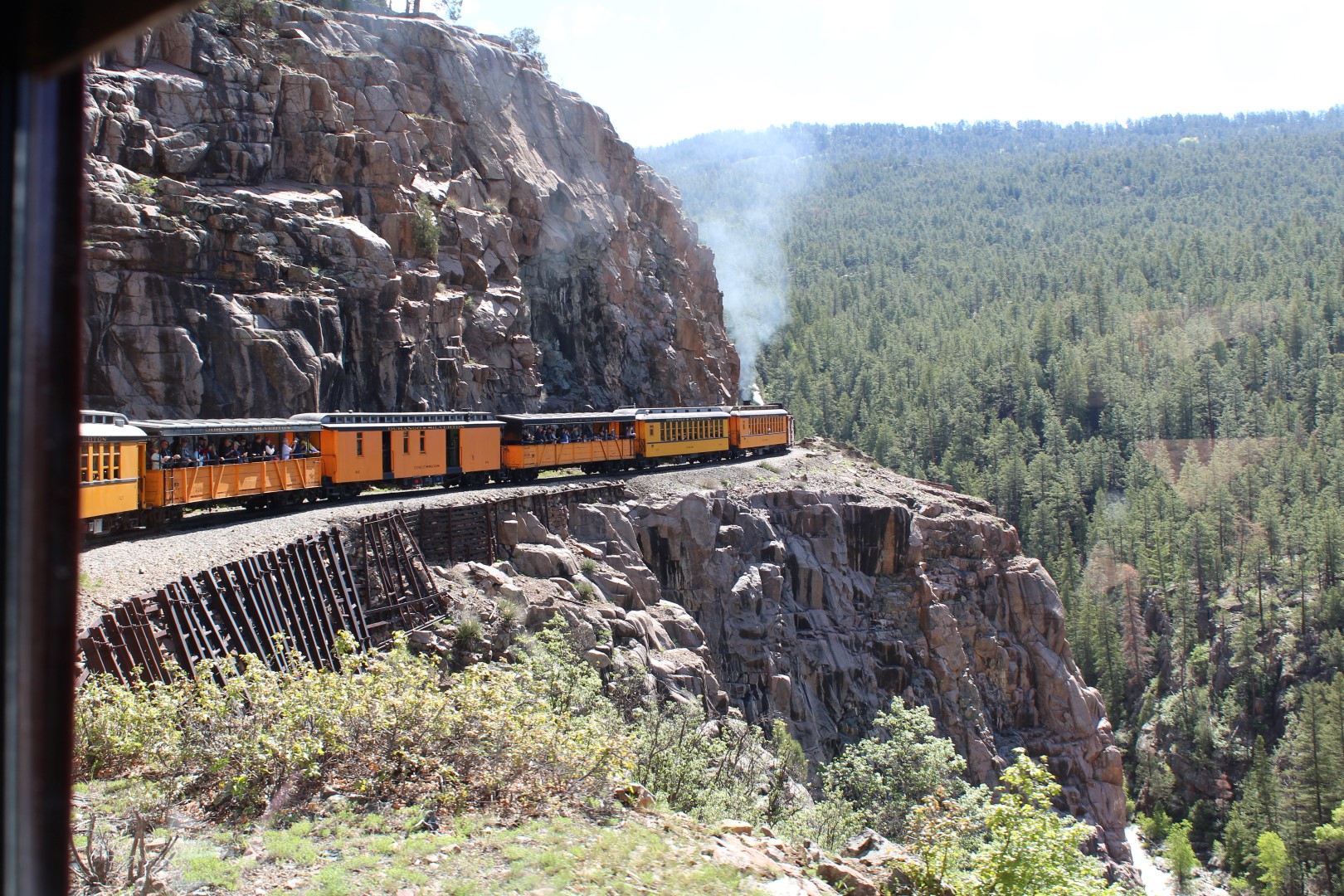 The largest town in the southwestern part of the Rocky Mountains, with a population of over 18.000, Durango is most famous for the historic narrow-gauge railroad that connects Durango and Silverton. But there’s so much more to see and do in Durango, Colorado. Take a look. 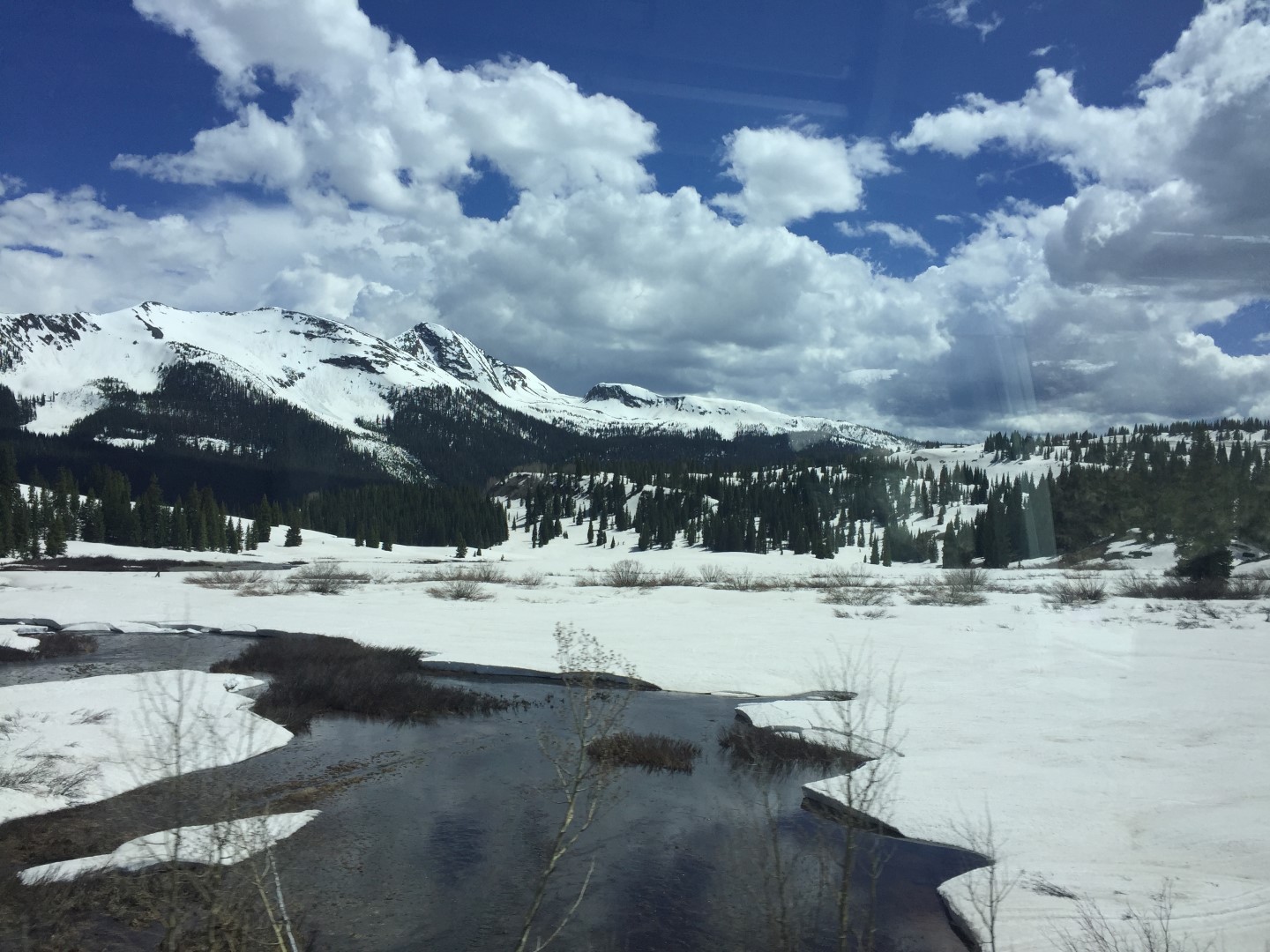 A view of Molas Pass on the San Juan-Skyway, from the motorcoach (Photo Janie Houston Pace)

Since 1881, the Durango and Silverton Narrow Gauge Railroad (D&SNGR) has been famous for its spectacular scenery along the Animas River through the rugged San Juan Mountains.  The D&SNGR manages seven coal-fired steam locomotives, the largest operational fleet in the country. The company owns the last of the three K-28 locomotives in existence: #473 has never been out of service for longer than routine maintenance; #476 underwent a major rebuild in 2017 after sitting in the museum for decades; #478 currently resides in the museum.

The Railroad employs four K-36 engines, built in 1925 and are all operational today. The Harper family has owned and operated this train line for more than 20 years. They strive to ensure the preservation of history and to expand and reinvest in their company. The D&SNGR is all about maintaining 19th-century technology today.  These powerful locomotives pull eight or more cars from Durango to Silverton at elevations varying from 6,520 to 9,300 feet. 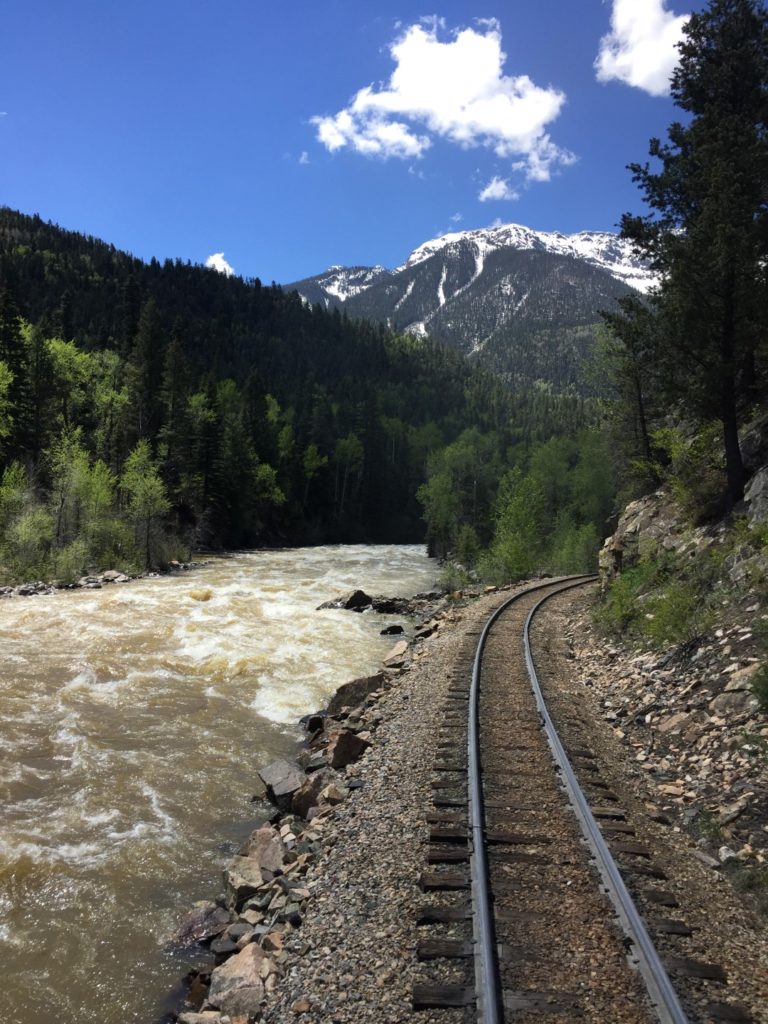 The Anamas River from the train (Photo Janie Houston Pace)

The D&SNGR: A Hollywood Star

Hollywood helped save the D&SNG with classics from yesteryear like “Around the World in 80 Days” (1956) and “Butch Cassidy and the Sundance Kid” (1969).  There were more than twenty movies filmed in the area, including the “Godless” mini-series in 2017. Experience the real American West history complete with gunfights and outlaw gangs, vigilante justice, gamblers, saloons, miners, and Native Americans. Butch Cassidy and The Sundance Kid were real outlaws, and Wyatt Earp had a home in Durango. 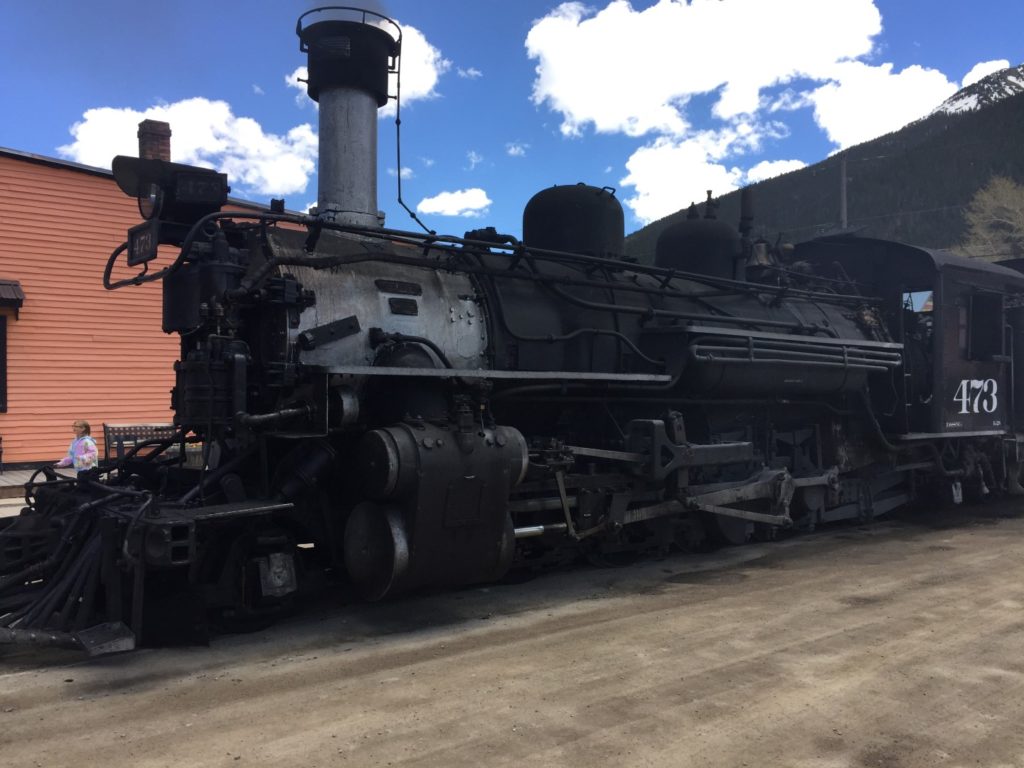 We made our train reservations online at least four weeks before our planned Thursday train ride.  Even then, the Presidential and most first-class cars were sold out.  We managed to reserve seats #5 and #6 on the Alamosa Parlor Car, the last car on the train, pulled by the famous #473 locomotive.  The Alamosa car was a charming ride, which provided access to beautiful photos of the tracks, the Anamas River and snow-covered mountains from the back deck.  Our hostess Allie provided delightful humor, history, and facts while serving drinks and snacks.  There’s a certain art of bending your knees while carrying a tray of drinks on a moving train and keeping them all upright – she made it look easy.

We made the return trip via the motor coach along the 52 miles of magnificent snow-filled mountain terrain on the San Juan Skyway after allowing two hours in Silverton for lunch and brief exploring.   You also have the option to return to Durango on the train in your same seat, learning more about the history of the area.  The purchase is a round trip package. 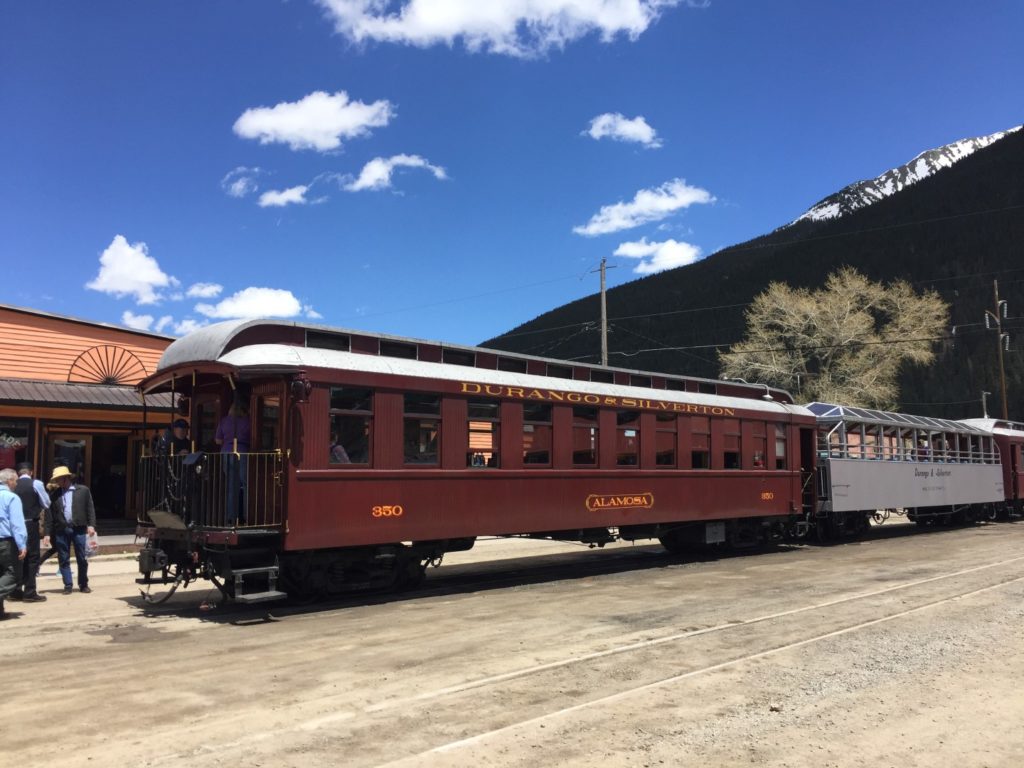 One couple disembarked at Silverton with their carry-on luggage.  They had plans to explore Silverton, spend the night at the Victorian-era Grand Imperial Hotel, the crown jewel of Silverton, and return to Durango the next day on the train. What a fun idea; wish I’d thought of that!

How fast does the train go? Eighteen mph top speed; five mph in the steepest climb.

How many miles does the train travel in one day? Forty-five miles to Silverton; 95-100 miles per day.

What is the oldest part of the train? The Concession Car #212 constructed in 1879. 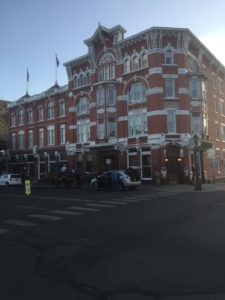 The Strater Hotel was originally built in 1887 by the Strater Brothers.  Conveniently located two blocks from the Historic Durango & Silverton Narrow Gauge Railroad Station, The Strater is well known as “The Jewel of the Rockies.”  The Strater Hotel, included in the Historic Hotels of America, A National Trust for Historic Preservation, has been owned by three generations of the Barker Family since 1926.

At the Corner of Main Avenue and 7th Street, the traditional iconic brick building has 93 beautifully appointed traditional Victorian guest rooms where the mission of every Strater team member is to deliver a historically unique guest experience.  With no two rooms alike, the hotel has the largest collection of American Victorian walnut furniture in the world.  When you visit, ask about the secret hiding places that mystified owner Rod Barker when he was a young boy. 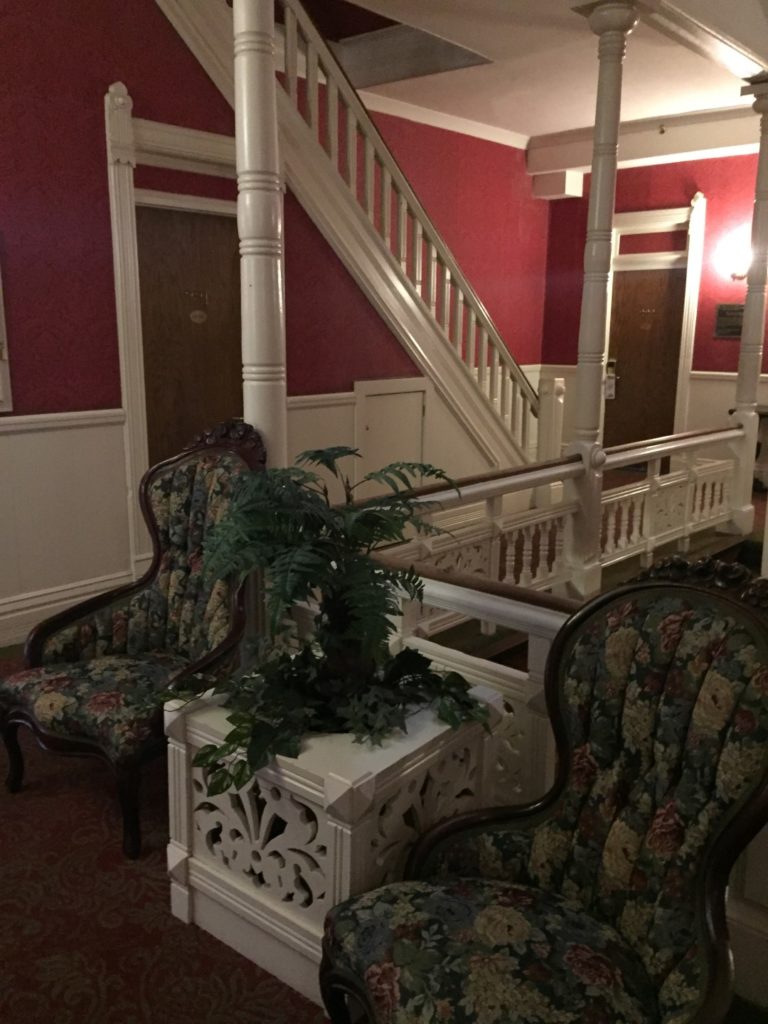 Dining at the Strater Hotel

Enjoy a hearty breakfast at the Mahogany Grill with a mimosa, a cup of bottomless fresh brewed coffee and seared trout finished with spinach and tomatoes in a lemon-butter sauce and two eggs any style.  Sub a side of fresh fruit for the hash browns and toast.  Or choose the Strater Exclusive Chicken Fried Ribeye Steak topped with classic house gravy and two eggs any style, skillet potatoes or BBQ baked beans, and sourdough toast.

Just let the waitress know when you are seated if you have a train to catch.  You can also order a grab and go sandwich or breakfast burrito if you’re in a hurry.  Saturday and Sunday morning Brunch is available in the Mahogany Grille or the Diamond Belle Saloon. 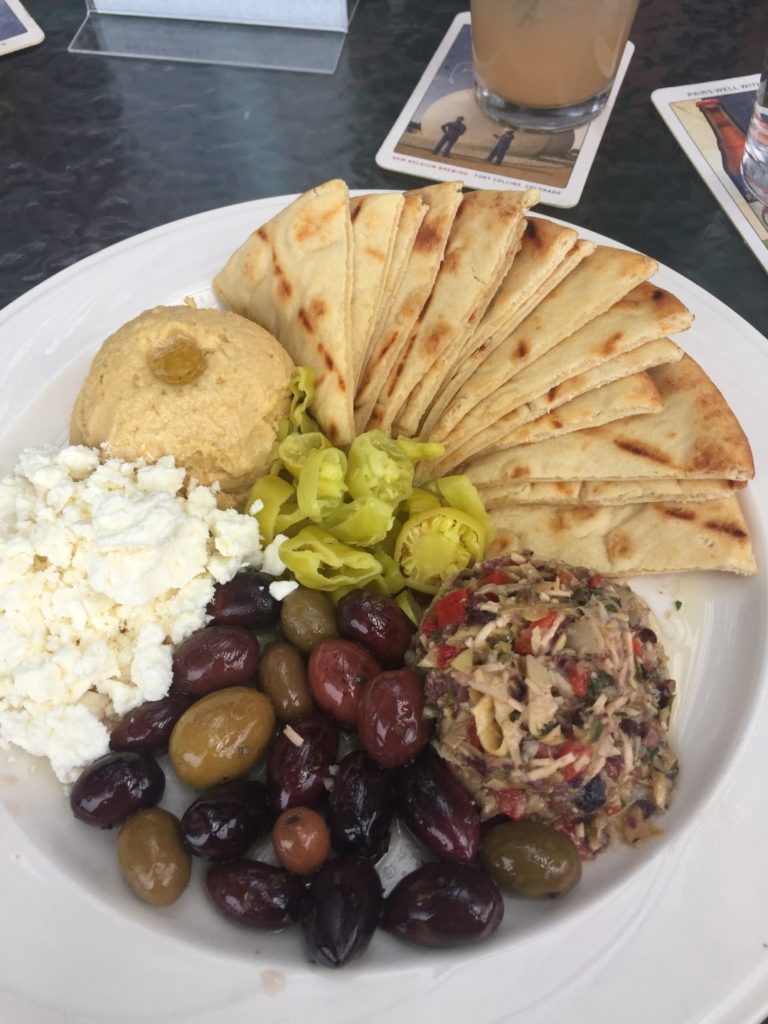 The Diamond Belle Saloon, Durango’s only true old West Saloon, flaunts saloon girls and bartenders dressed in costume.  Earl Jr. converted the old corner drug store to the Diamond Belle Saloon in 1957, and it’s been ragtime ever since.  Read about the historic bar, authentic stained glass, original wallpaper and two portraits which was an artist in residence method of paying his hotel bill back in the day.

Tap your foot to Scott Joplin style ragtime piano or country and western songs. Enjoy Happy Hour with special pricing on drinks and appetizers like Nailed-It Nachos or the Charcuterie Platter.  For dinner, order the Petite Filet Mignon, the Belle Burger or Rocky Mountain Rainbow Trout.  Belly Up to the Belle for a good time! 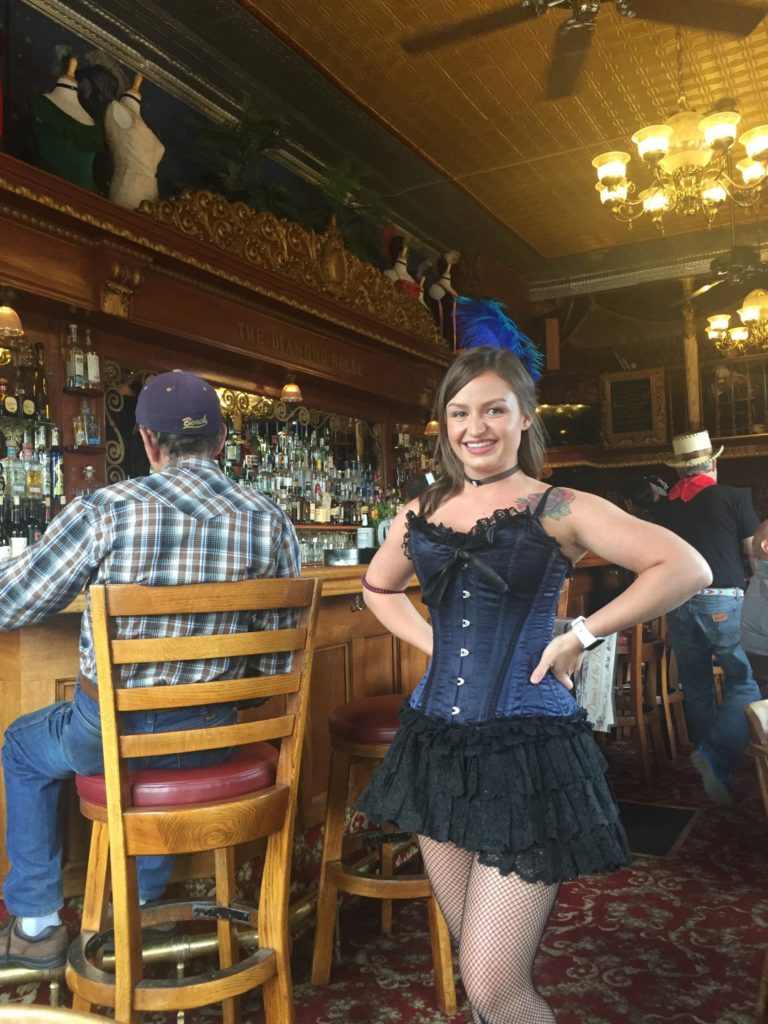 The Office Spiritorium, also in the Strater Hotel, is not your usual social establishment.  Take yourself back in history to a Victorian upscale men’s social club setting in San Francisco.  Find the clock in the entrance area set to 5 pm – it’s 5 o’clock somewhere, here always.  Choose a creatively crafted cocktail like Whisky Business made with double espresso vodka and bourbon cream; Once Upon a Time in Durango with Cimarron Blanco, red chile, triple sec, lime, agave with ancho rub; or Barkertini, with vodka, a touch of sherry and an olive. 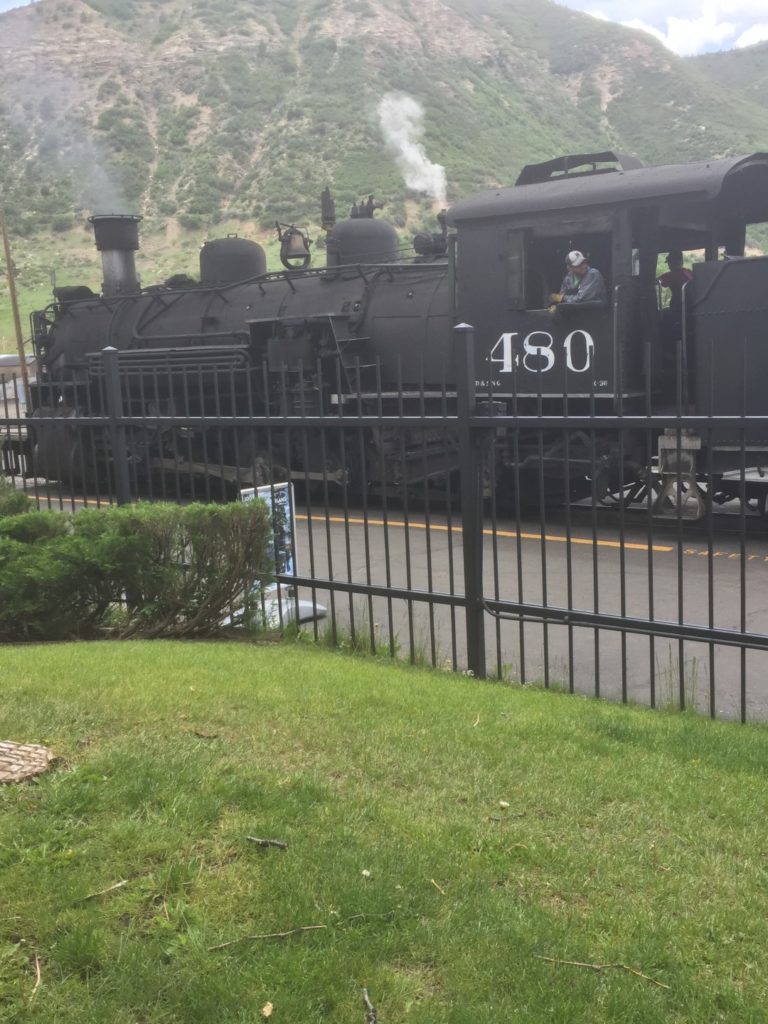 With your hunger and thirst abated, delve into the history at the D&SNGR and Museum, free and open to the public every day the train operates.  Established in 1998, the Museum represents how railroads played a vital part in the development of local communities. They do a great job showing how the railroad affected life in the San Juan Mountains.

Not only will you find locomotives like the #42 and #478, but you will also find vintage automobiles, a vintage fire truck, historical memorabilia, wildlife exhibits of elk, moose and deer, and even a bearskin rug.  There is a 1900 Mobile Steam Car, a 1919 Hupmobile, a 1925 Buick Roadmaster, a 1923 Nash and more, all brought to the Durango area by rail. 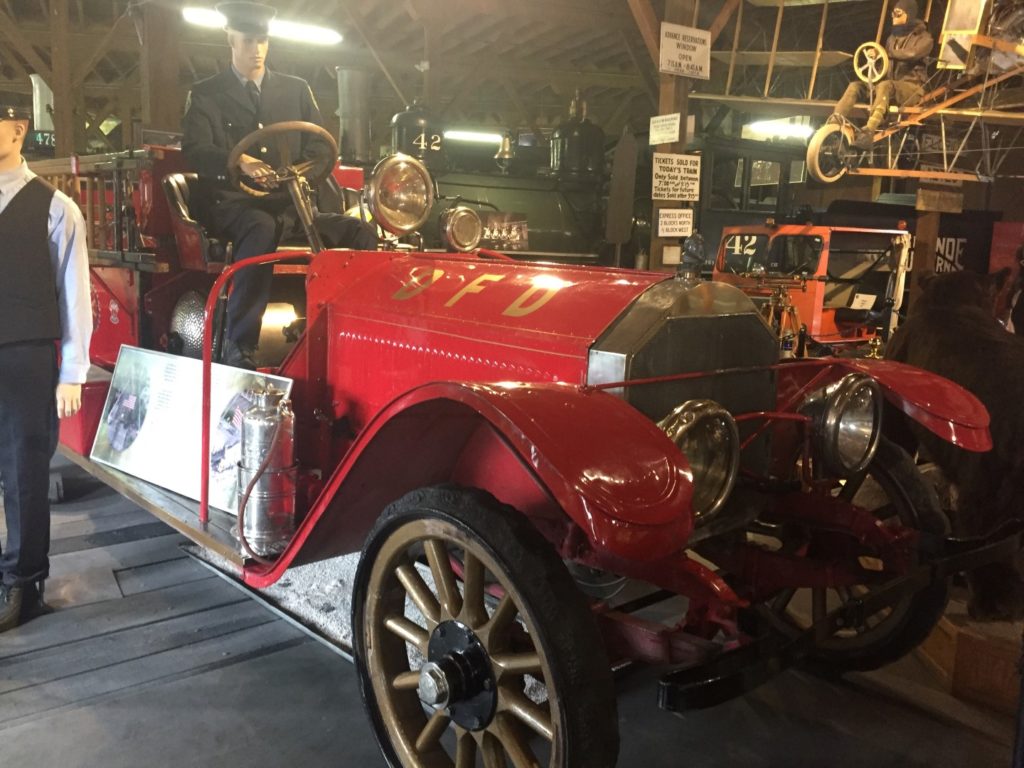 See the 800 square foot railroad model, and a vintage railroad car built for the movie “Butch Cassidy and the Sundance Kid.”  The rare Coach 460 Sleeper Car is still in its original (un-restored) condition.  A six-hundred-gallon custom aquarium full of rainbow trout represents the Anamas River display. The 12,000 square foot museum, a fascinating history of railroading transportation and mining, is located across the tracks at the train station. 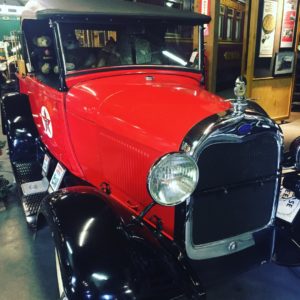 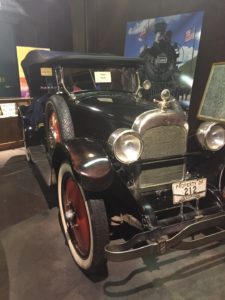 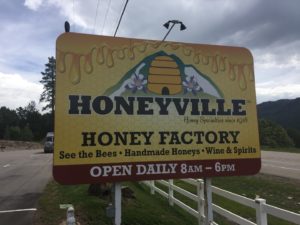 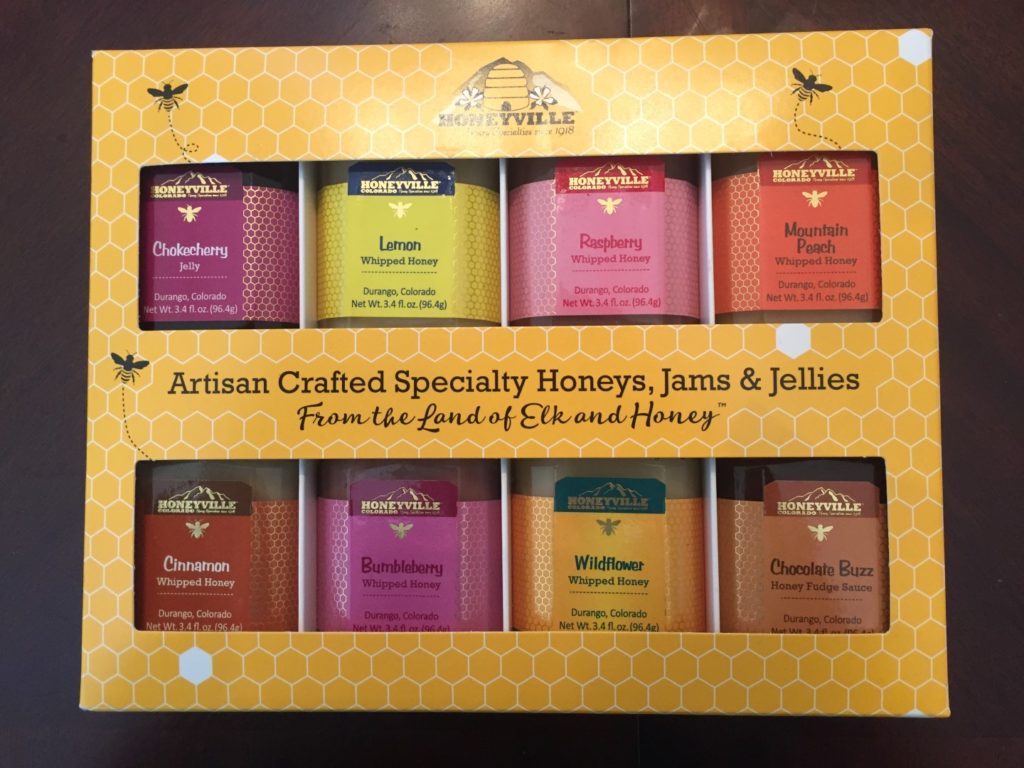 More to Do Around Durango, Colorado

There are or many more things to do around Durango, Colorado. Hike along the Colorado Trail, raft the Animas River, swim at Lake Nighthorse, or take a jeep tour. You can arrange a custom guided fly-fishing trip. Visit a Dude Ranch and ride horses. Try the zip line adventures. Explore Mesa Verde National Park. Drive the San Juan Scenic Byway and the Million Dollar Highway from Silverton to Ouray. Pan for gold at the mine in Silverton. In the wintertime, ski at Purgatory Ski Resort.

There is an adventure with a touch of history for everyone in Durango, Colorado. 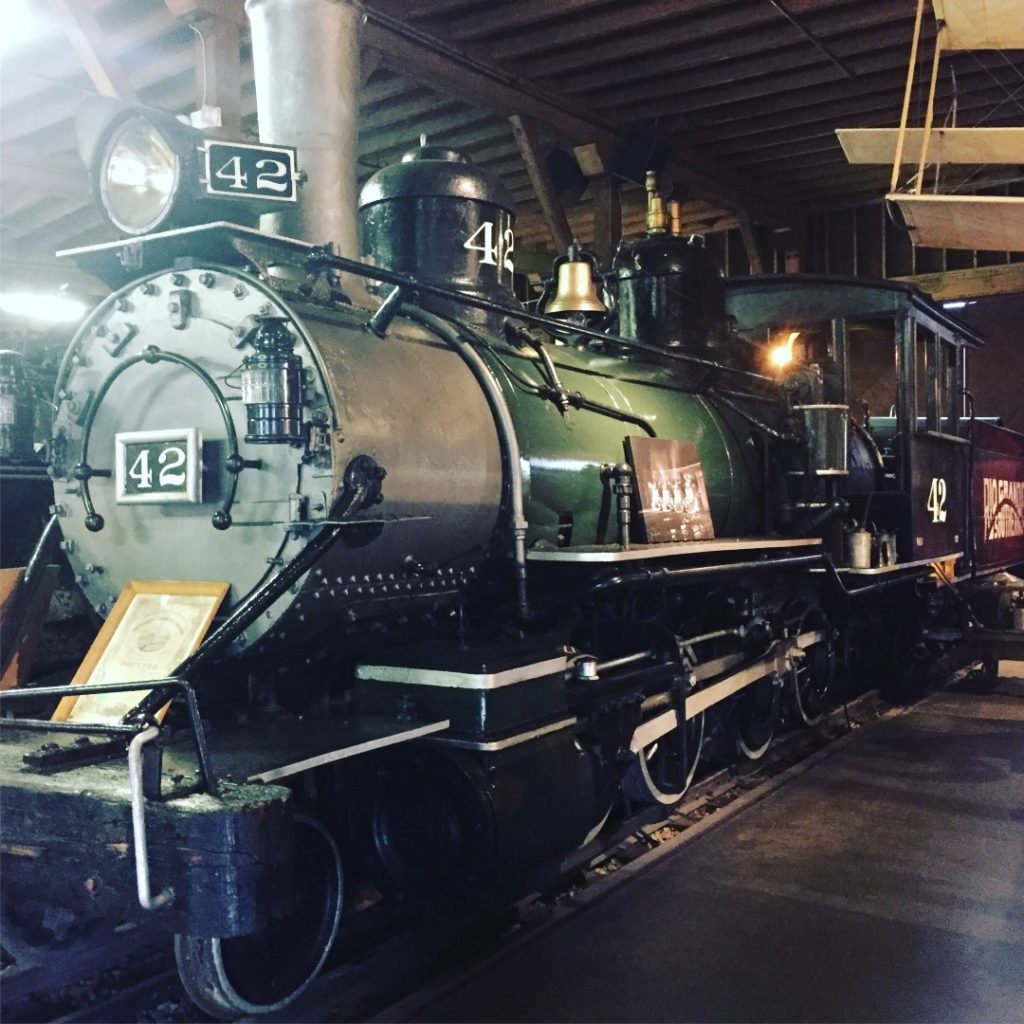 – All photos by Janie Houston Pace.

Great article – makes me want to get right to Durango. Love the looks of Honeyville!

You should look into Eagle Ridge Luxury Camp right outside of Durango. Beautiful Glamping locations

Thanks for the tip, JC!