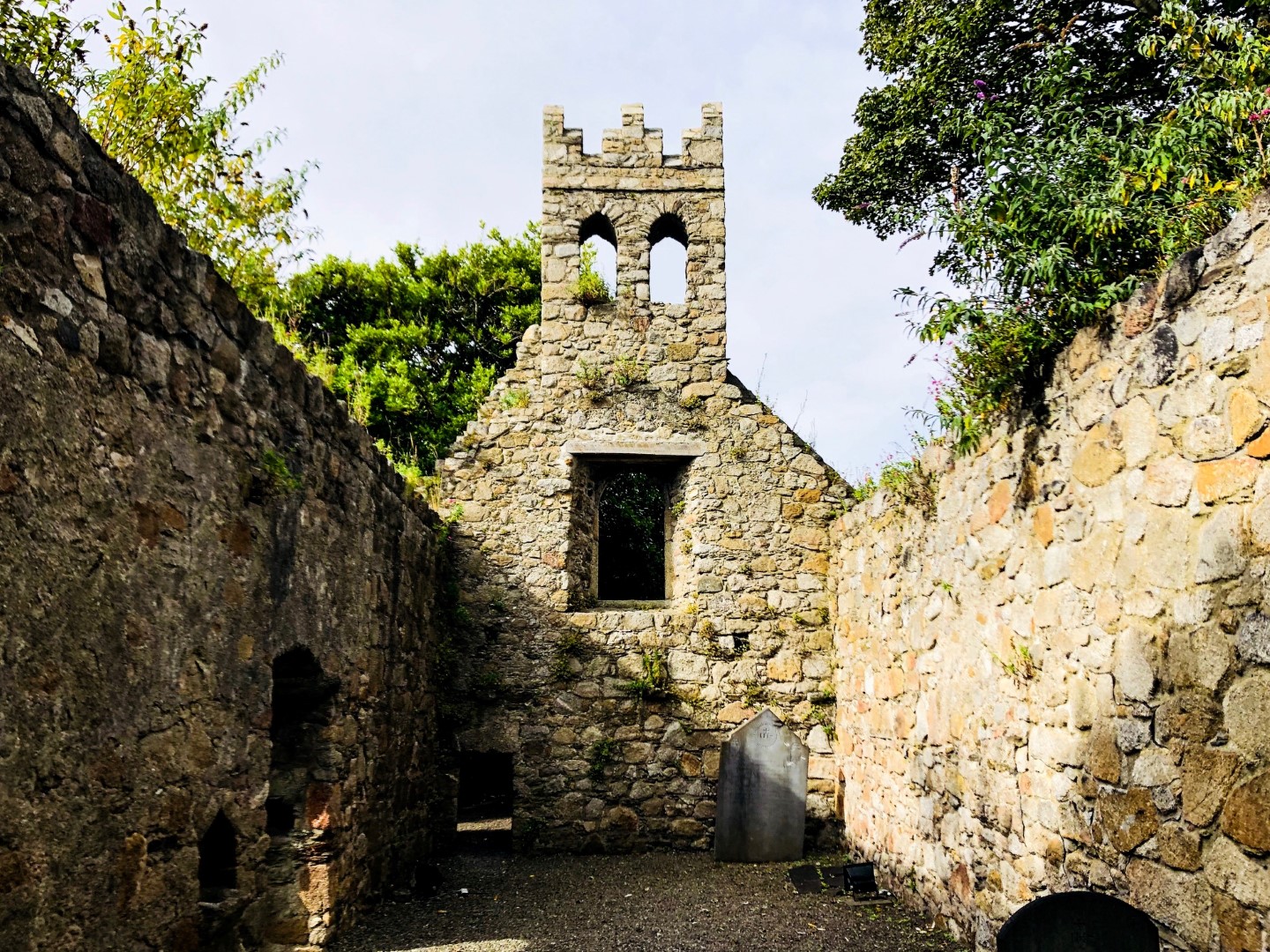 Ireland’s Dalkey Castle and Heritage Center is a living history museum in Dalkey, Ireland. The castle is in actuality a former storehouse. Known as Goat Castle, it became grand with architectural fortifications against bandits, including  sworn enemies, the O’Byrnes and the O’Tooles. Dalkey, with its sheltered location and deep water, acted as the port for Dublin in the 1400’s and 1500’s. It served the boats coming off the bay from the Irish Sea. The goods would then be transport by land north to Dublin. 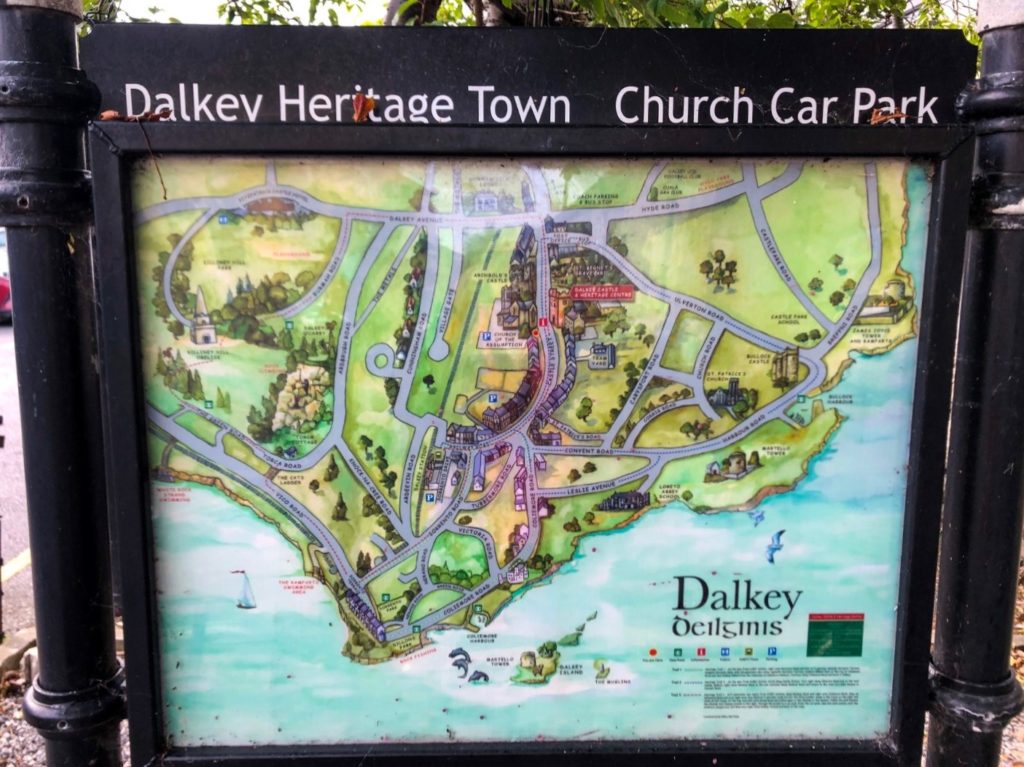 Today, a lovely 30-minute train ride on the Dart from Dublin takes you to Dalkey. Dalkey itself is easily walk-able. Follow the signs down the hill from the train station. Linger to admire the many restaurants and little cottages on the way to the main street in town. And don’t miss a tour on your visit to the Dalkey Castle and Heritage Center. 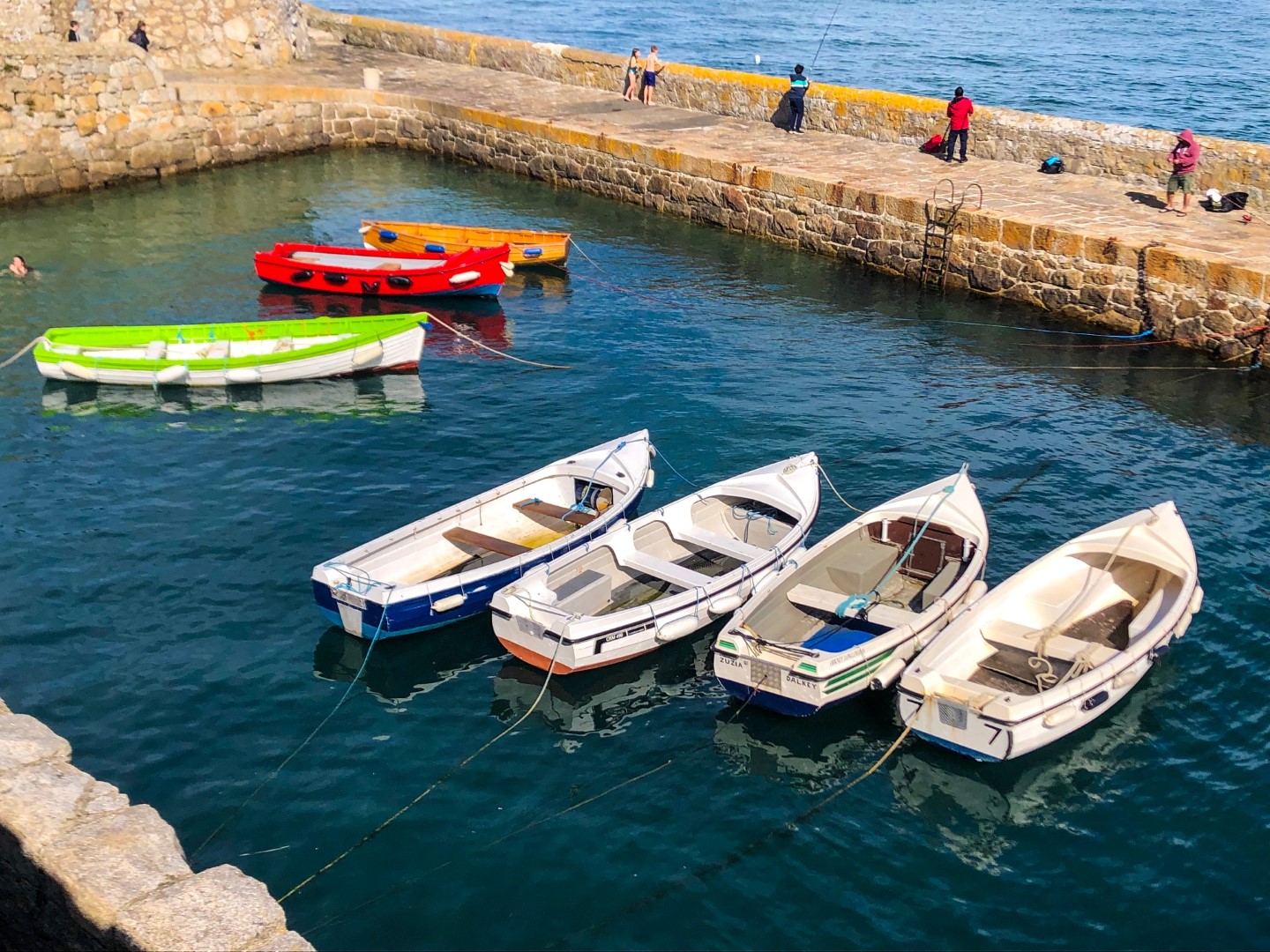 A Tale of Seven Castles

“The road itself curves gently upward and over a low wall to the left by the footpath enchantment is spread … with beyond it the immeasurable imminent sea, quietly moving slowly in the immense expanse of Killiney Bay.” -Flann O’Brien

Once upon a time, seven such castles lined this road, but now Goat Castle is the only one in active use. The ruins of one other, Archbold’s Castle, handles special holidays, like a much beloved living Christmas creche. And a very haunted Halloween.

Dalkey Castle is four blocks down on the right. The tower remains visible from blocks away. 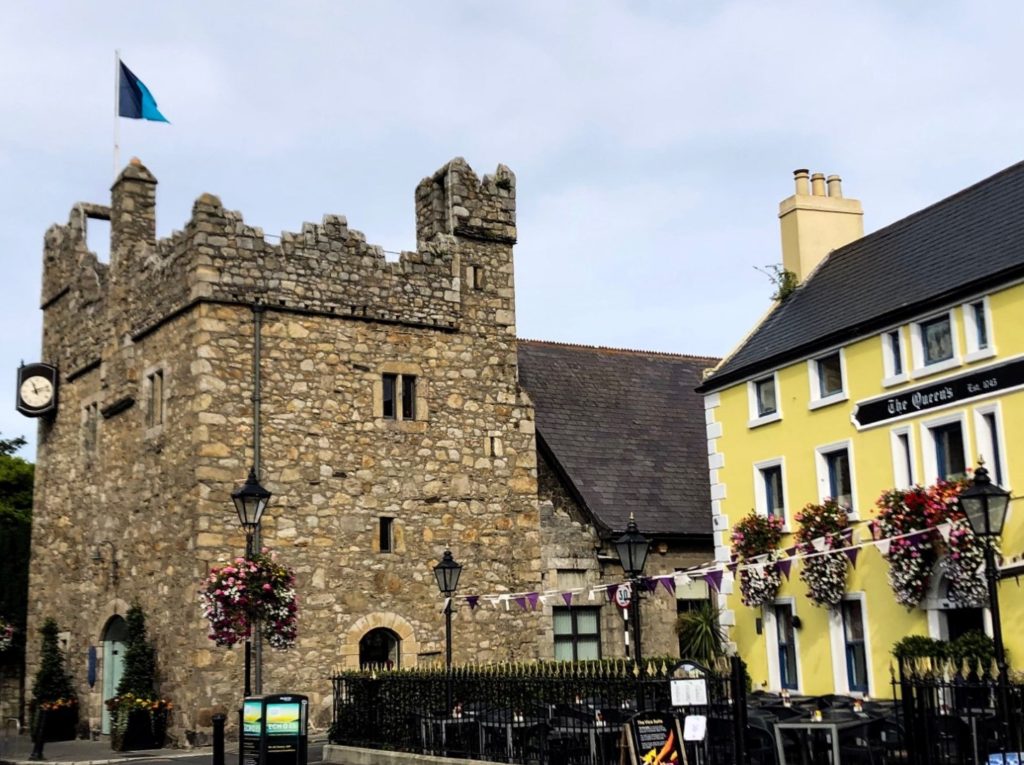 Just across the street stands the lovely, active, Roman Catholic church. Its spire is visible from a distance.

This is the church where the late beloved Irish novelist, playwright, short story writer, columnist, Maeve Binchy, asked the priest if she could be buried. Binchy, who died in 2012, was especially  known for her  often humorous portrayals of small-town life in Ireland. Even though she wasn’t an active Catholic, the priest, a writer himself, famously said, “Dead or alive, Maeve, you’re always welcome at church!”

Maeve Binchy, definitely one of Dalkey’s most famous citizens, also has her own writer’s tour. 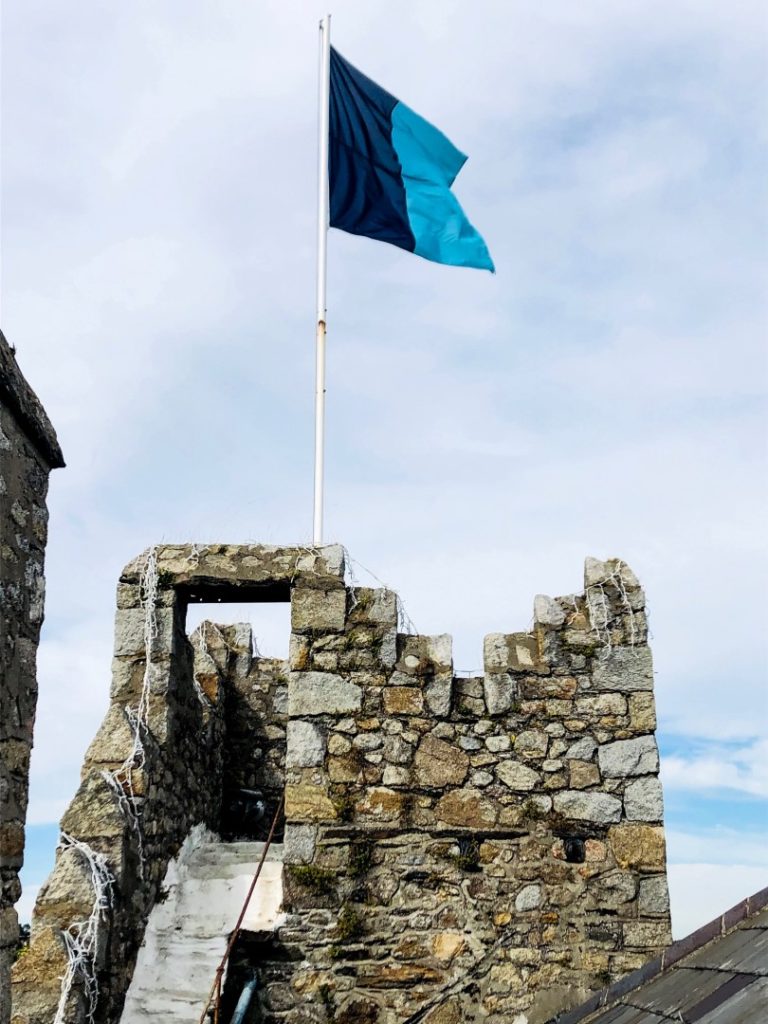 Your entry fee at Dalkey Castle allows for upkeep and repairs. It serves as your admission to a trip back in time. The Dalkey historians trace Dalkey Island to 4500 B.C., and brings you forward to modern day.

You’ll be welcomed into a very modern gift shop and display areas at the Dalkley Heritage Visitor’s Centre. There are two video presentations. Barrel shaped ceilings creation. And coin minting. They’re both interesting and educational. You actually pass the castle entry to view the extensive historical restoration. This Visitor Center tells the tale of the town’s bygone dates in great detail. It’s meticulously researched and comprehensive. 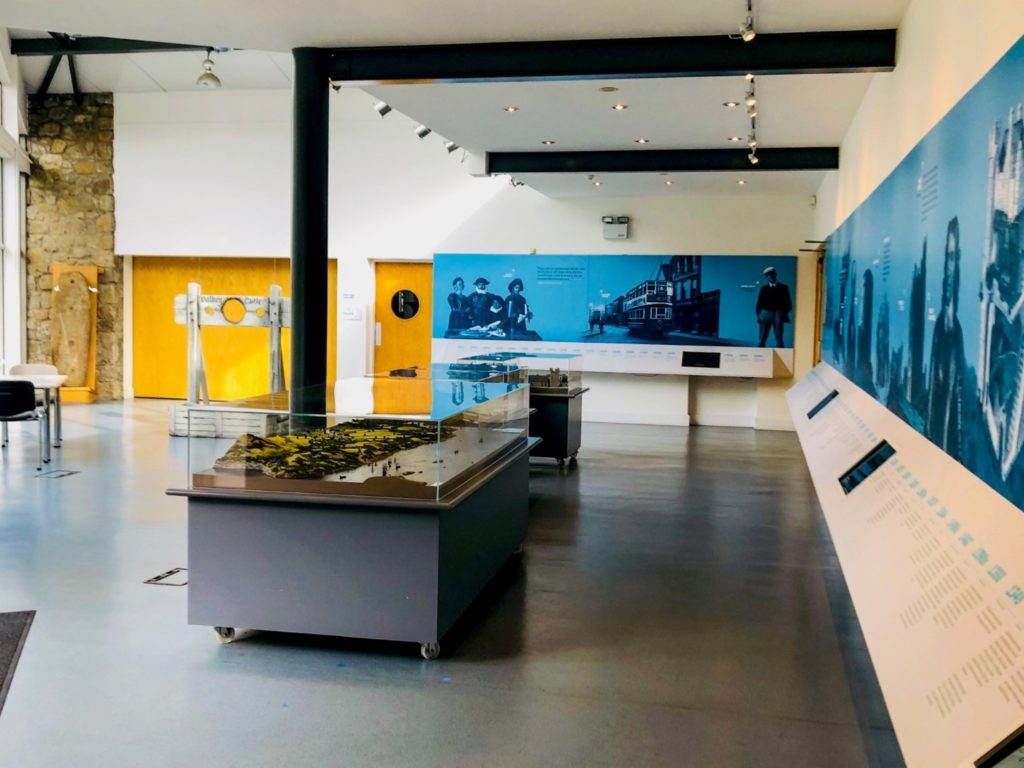 Each of the embedded screens within the display provide identical information. View the details of the dates listed and supplemental video or photographs. Learn of the “Mock King of Dalkey” festival. And the archeologist’s discovery of Mesolithic hunter-gatherers. 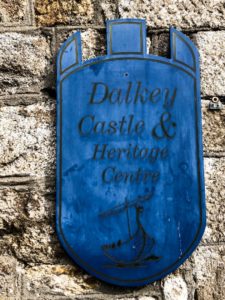 As the tour begins, you’re most welcomed by a lovely guide. It was Rita for us. She invites you to sit in a small media room for a short film. It explains the history of Dalkey and the importance it played in the growth of a nation. The film also explores the historical significance of many of the writers from the area. Maeve Binchy is included in the film.

The writer’s photo wall behind you, including Maeve’s husband, has two interactive frames as well. The information found therein is well worth the time spent reviewing it.

Some of the most important writers in Irish history have Dalkey ties. James Joyce spent summers here until he was 10. It is the setting for Ulysses.

Next is the part most come to the Castle to find – the living history. Actors from the Deilg Inis Theatre Company portray a 16th century archer and the Lady of the house.

First, out to the old church ruins and graveyard. The stone height means something – so pay attention. 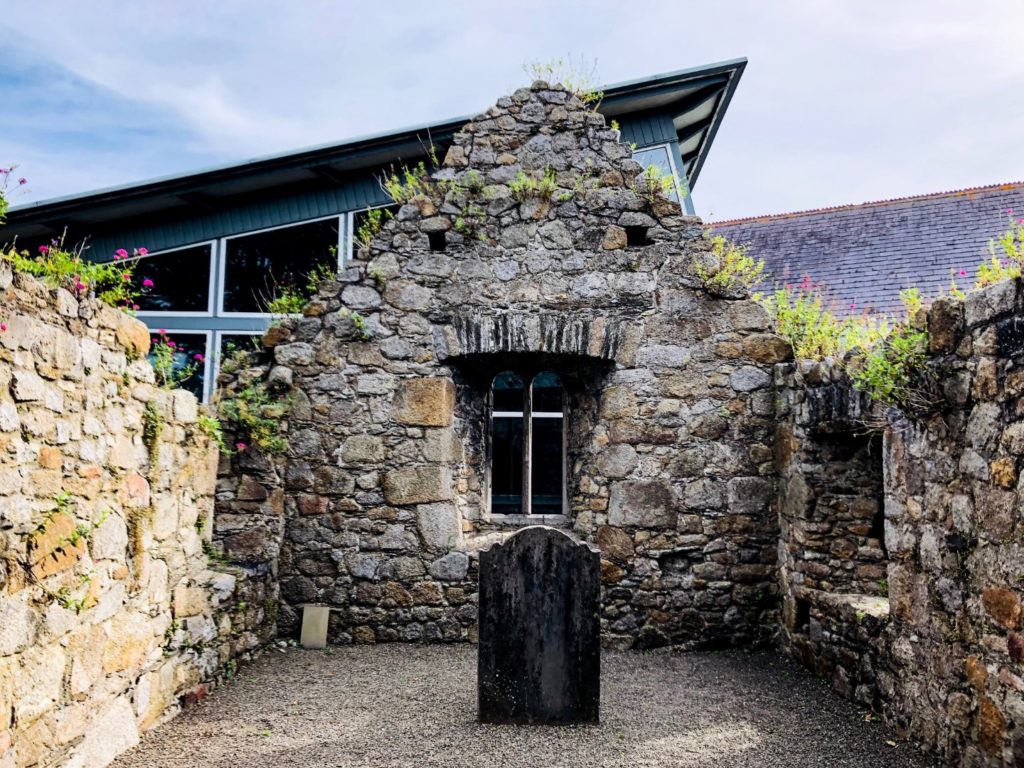 Documented burials occurred from Cornelius in 1738 to Mrs. Anne Kavanaugh in 1930. 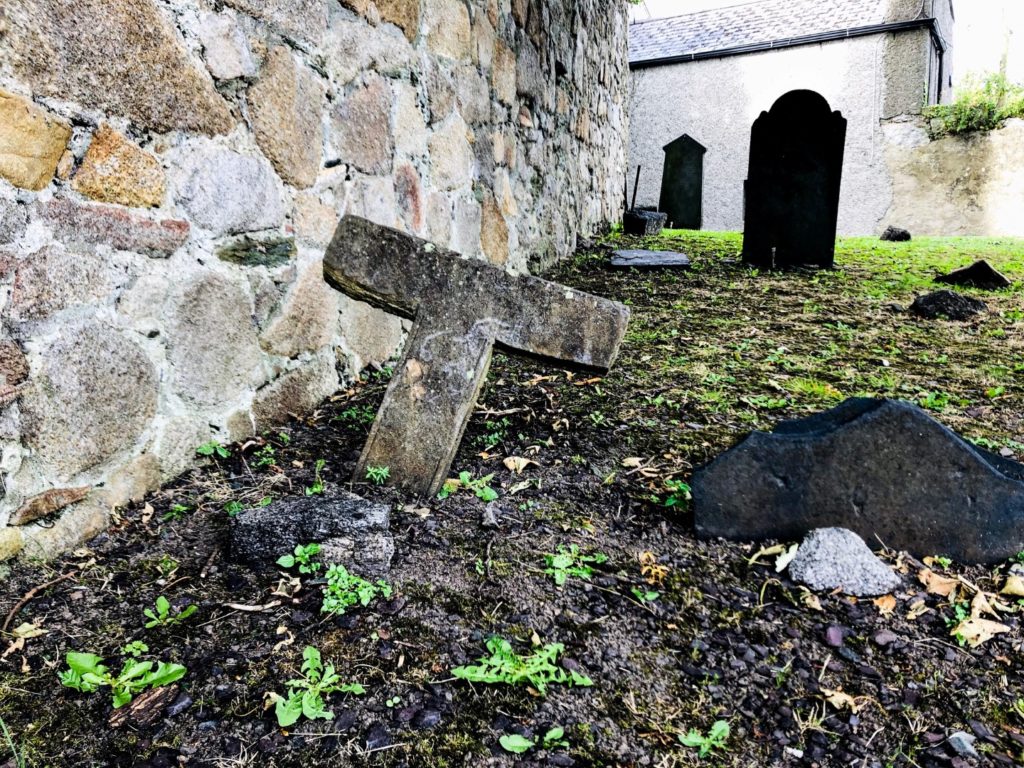 While in the narthex  (an antechamber or porch) of the church, most startle when they meet the medieval archer. He greets you with his bow and arrows – several types. And happily shares with you their individual use. Whilst inviting participation from anyone else who may like to try handling his bow. Special kudos to any visitor who shows good form.

You learn the significance of the building’s window. Narrow from the outside to protect from arrow entering. But spacious from the inside to allow the archer protection to do his job.

One yew tree sits conveniently outside a window with dual purpose. (a) Use the branches to build more bows and (b) get the animals to stop coming in and disturbing the graves. Yew leaves make the animals sick. They quickly learn to leave them be. 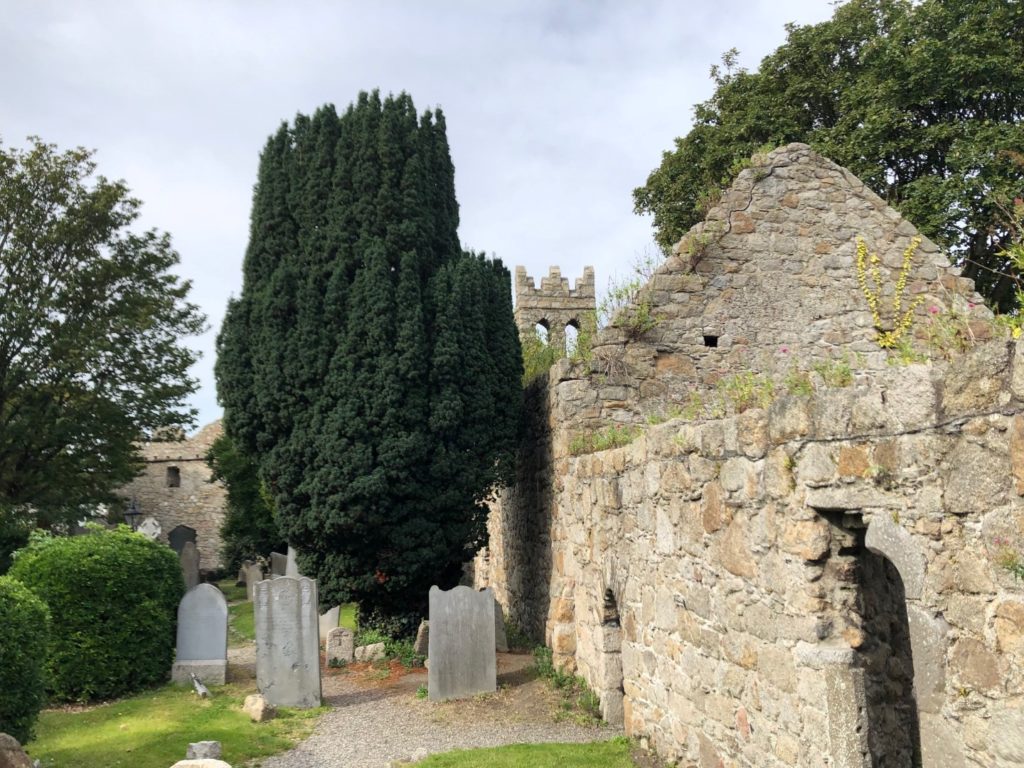 The archer invites you up to the embankment roof. This is when you journey up the uneven spiral stairs. He shows you the one sheltered area to stay in the battlements. And the ease with which they moved to each of the four tower corners as they stood watch and protected the castle.

He then leads you down to the main section of the castle where the family lived. He mentions a bath chamber dressing room where the urine (“Your- ein”) helped keep the lice at bay. Ugg, ick and ewww. 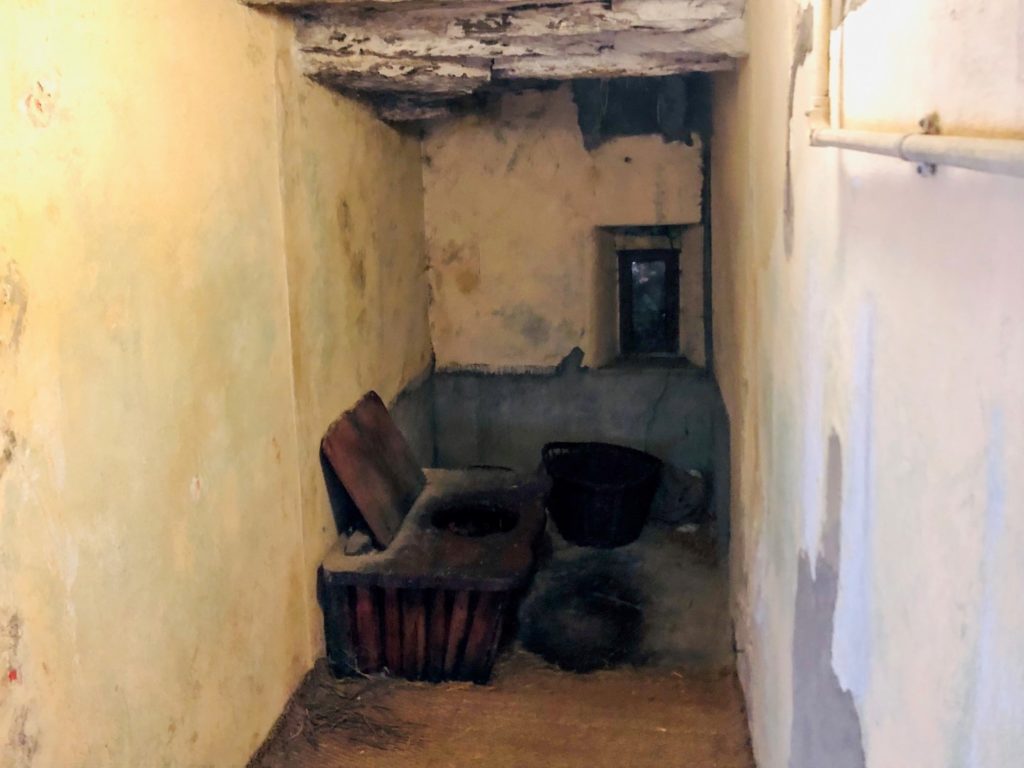 The archer may tell you that, unlike the “Irish barbarians,” he washes once a year – on his birthday. Sadly for you, today is not his birthday… 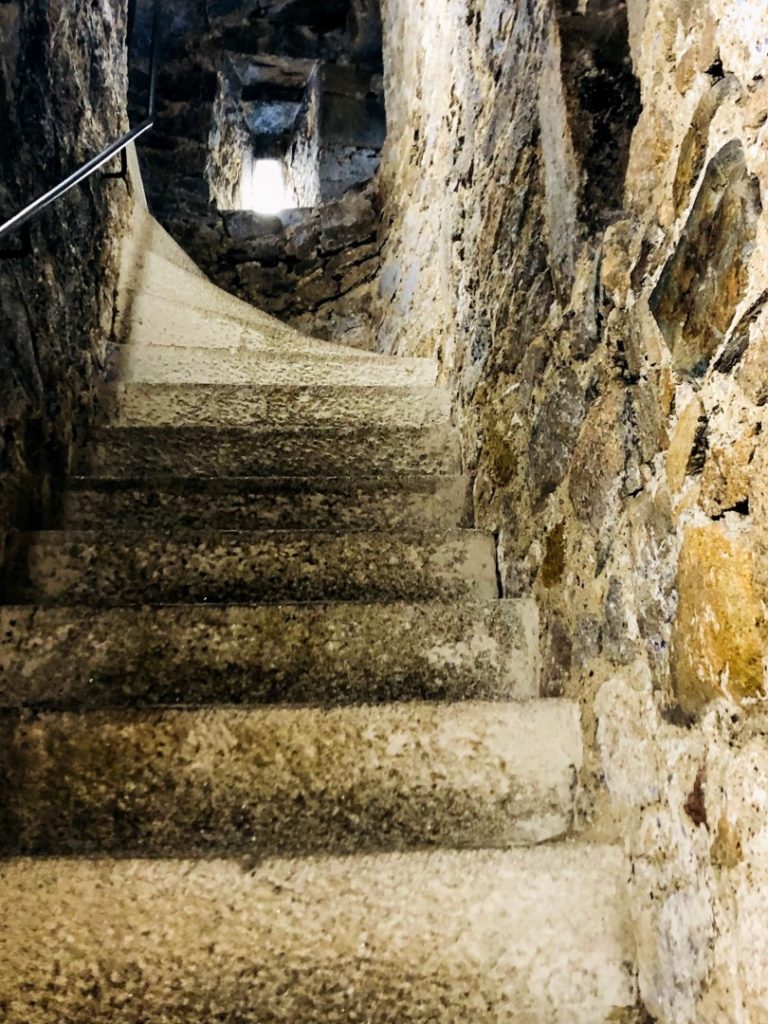 The Lady of the House

The lady of the house, Lady Catherine, invites you to help prepare the feast for King Henry VIII who visits this day. She’ll share the local customs of the day. The ways of their world, the meaning of certain phrases. And she’ll even show you how the archer’s plate is different. A square plate with a small circular space specifically for salt, since he’s earned it. This led to the phrase, “three-square meals,” a saying still used today. 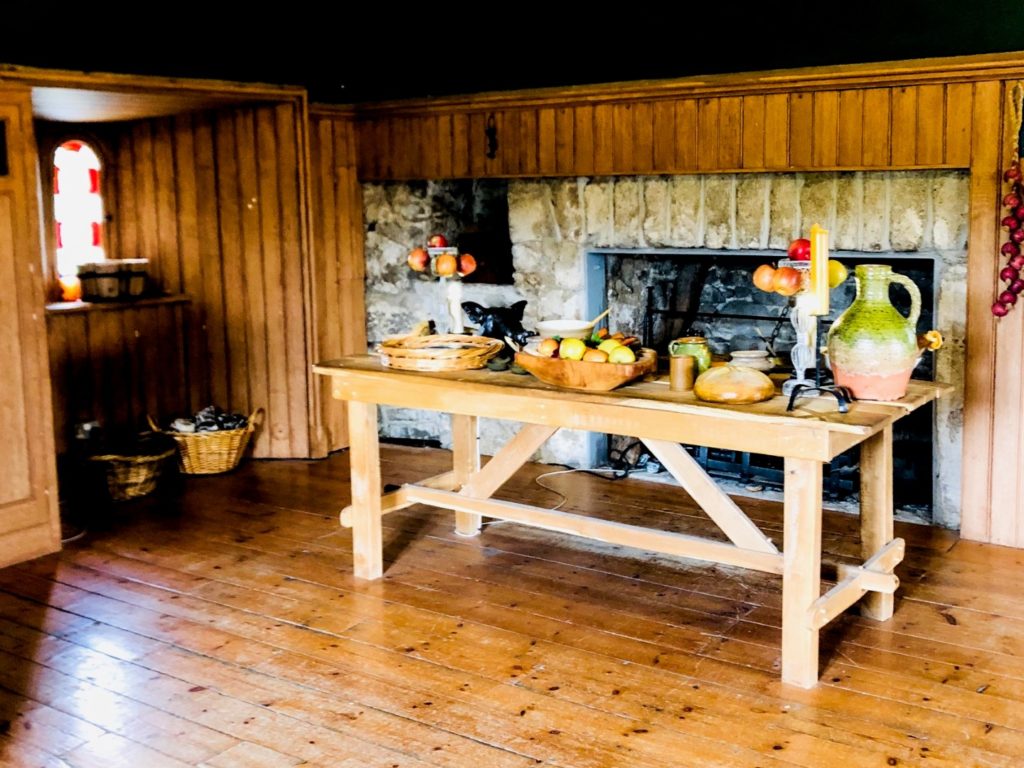 You’ll view the aforementioned clothing area – no lice remain. Lady Catherine invites you to sit for a demonstration of the duties of the lady of the house. She’ll explain reasons for things like the red and white barber pole. And the value of tasting urine to distinguish certain maladies. 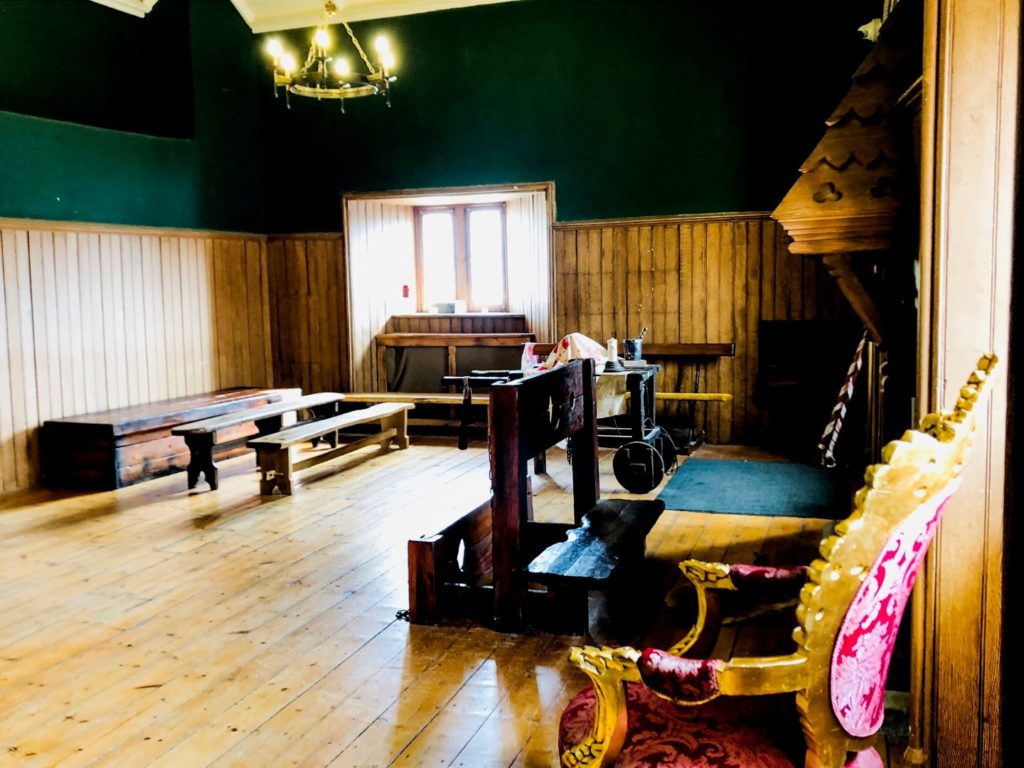 She invites audience participation and straps the lucky offender – err, visitor – down. To show how amputations occur. Never a dull moment for the lady of the house.

Once the tour is complete, take the time to wander around the displays. Find your favorite year to see what was happening at Dalkey.

If you’re very lucky, you’ll meet Margaret Dunne, the Director who keeps Dalkey Castle running. Her story and the methods she’s developed to preserve and restore the site are compelling. Speaking with her makes you realize how very fortunate you are to be able to view this moment in Irish history. 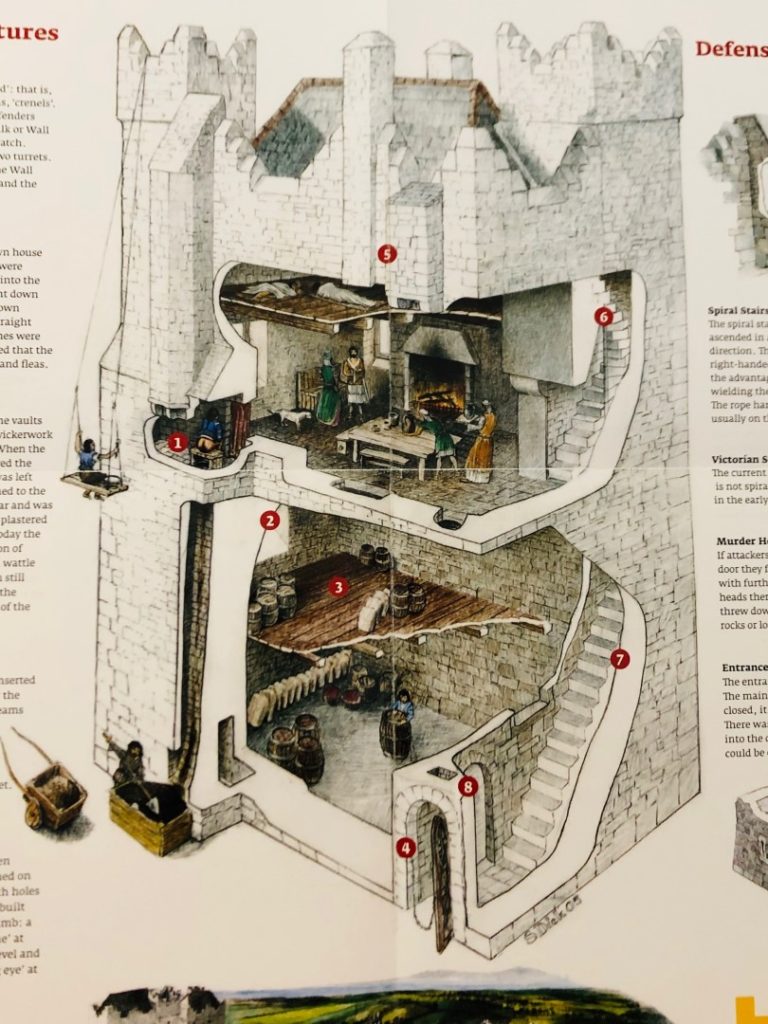 Explore the Village of Dalkey

In the Village of Dalkey, start by asking for recommendations for a meal – there are several places to choose from in town. I enjoyed Ouzos Steak and Seafood. 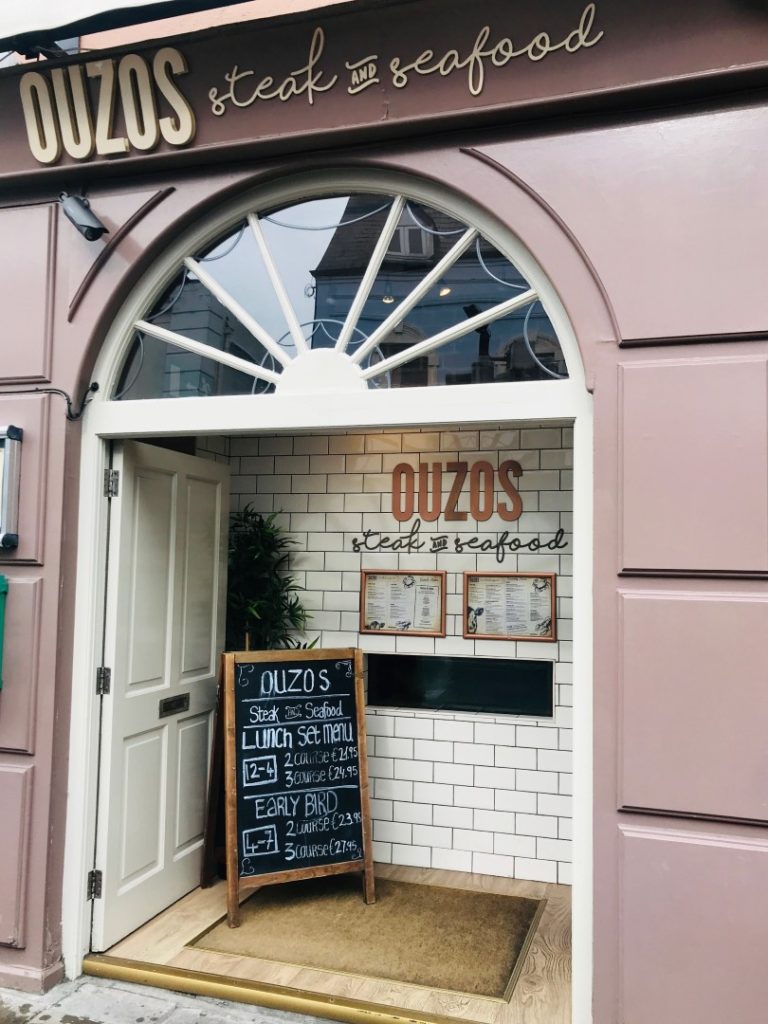 There are also many excellent pubs in Dalkey. 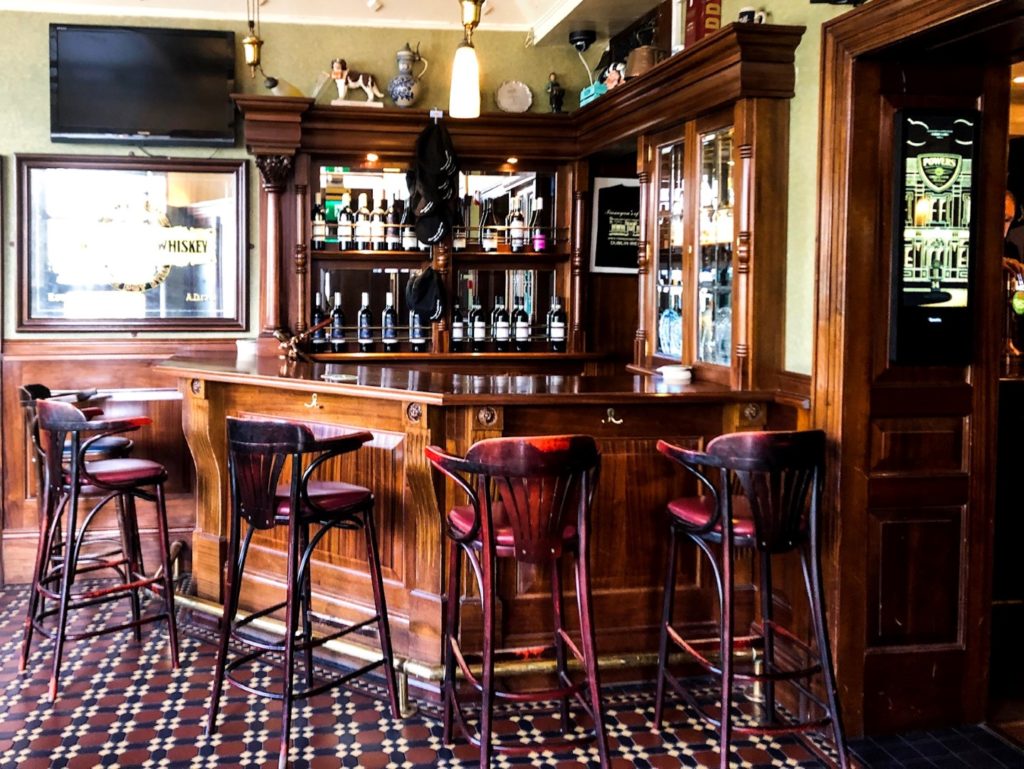 A present day pub in Dalkey (Photo by Gail Clifford)

Wander the streets. Besides Goat Castle’s , find the other six castle plates on the ground. 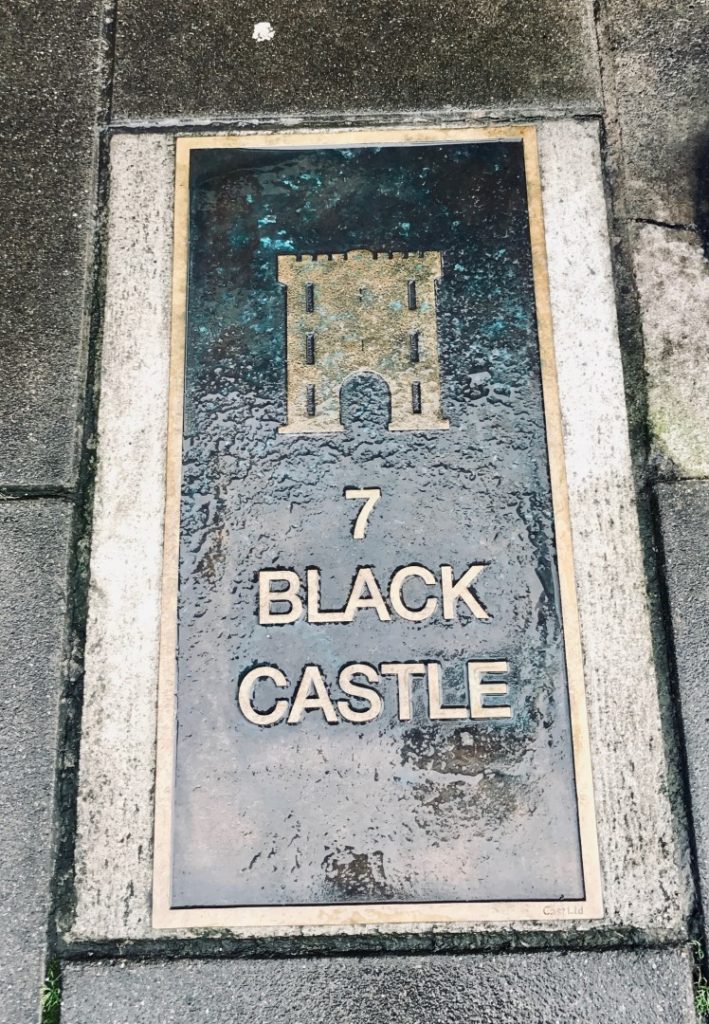 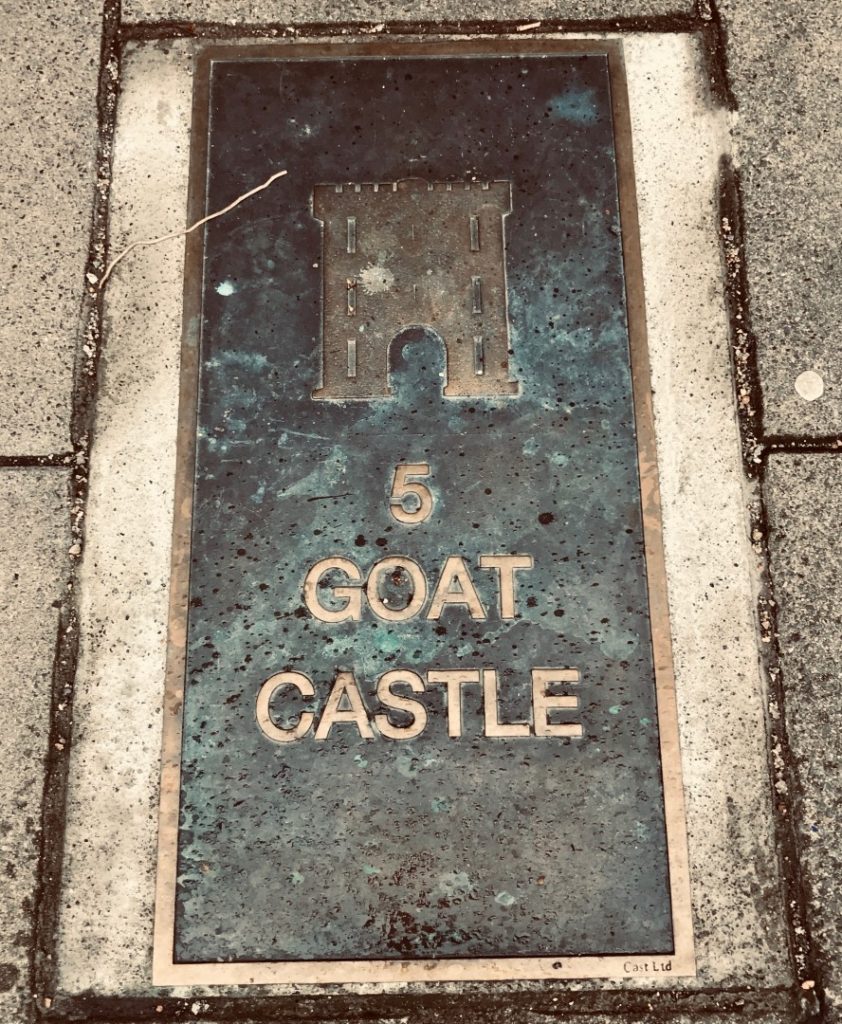 Take the time to walk down to the water for views that will delight you – even in bad weather. 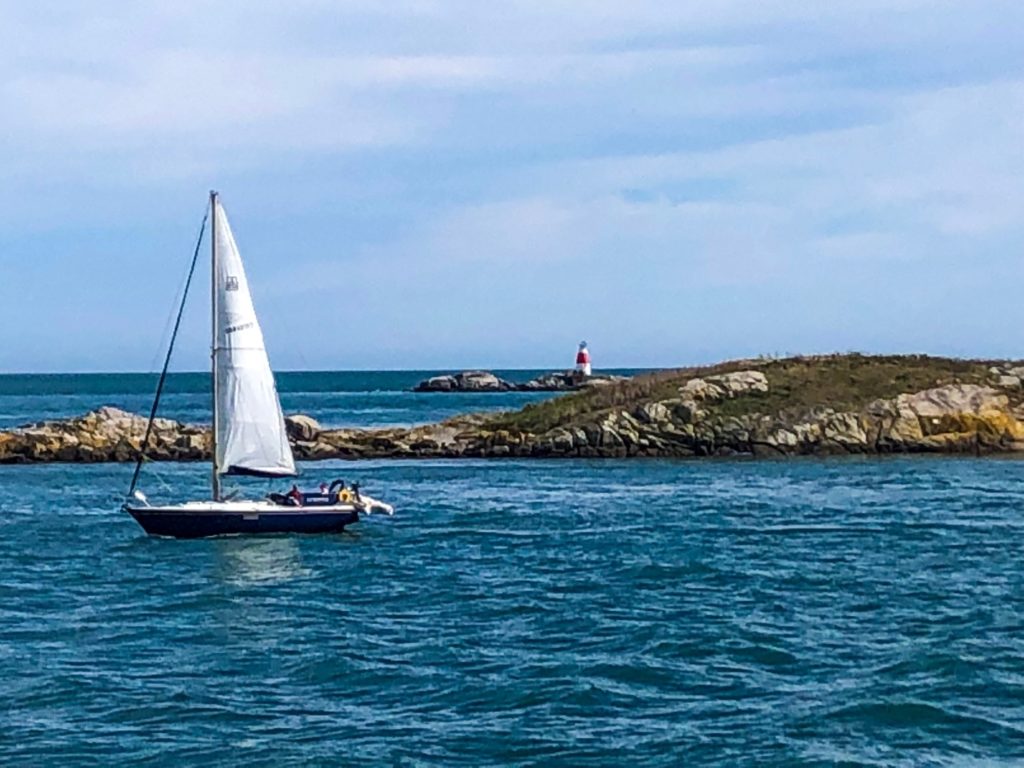 And those cottages built for workers? Two beds and a little land in Dalkey now cost a million dollars. History does have a price. But you’ll leave feeling as though you’ve made friends at this storehouse castle. And find even more than you’d expected.

Seek and ye shall find entry to another little known part of Irish history. 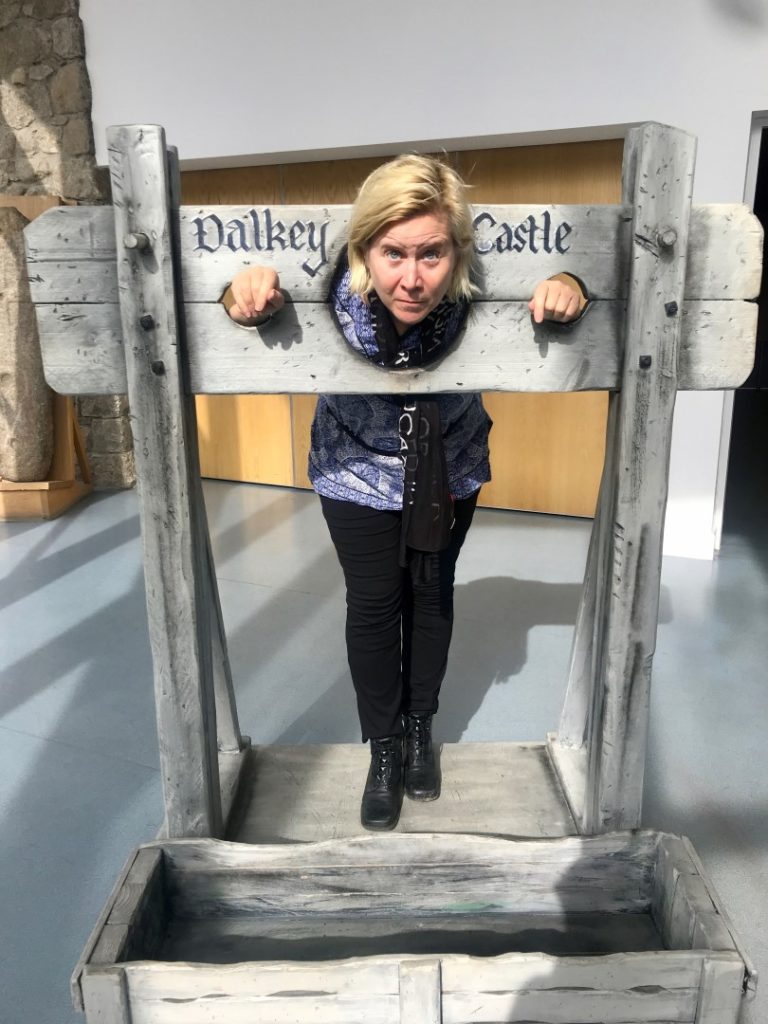 Gail Clifford has a little fun at Dalkey Castle

-All photos by Gail Clifford.

Gail Clifford, MD, a physician for more than 25 years, has traveled to five continents and all 50 United States. An avid traveler, she happily goes on new adventures, especially on birthdays. Multi-generational travel remains a treasured pastime. She divides her time between Ireland and the U.S. Follow her on Instagram.

Bird Watching: Where to View and Photograph Florida Birds

A Historic Getaway in Durango Colorado