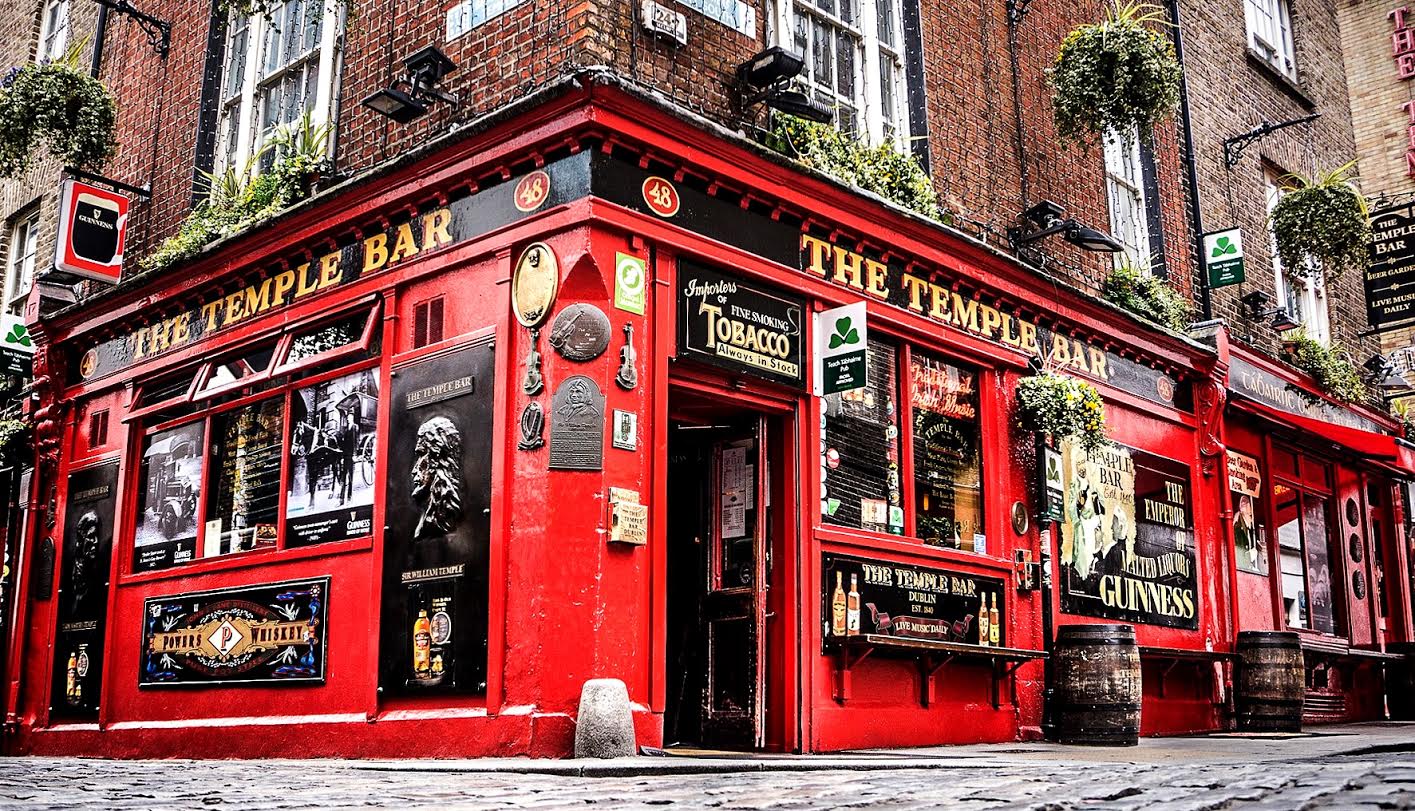 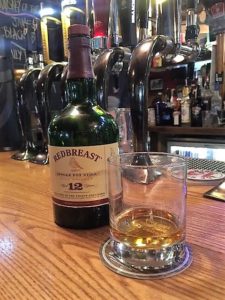 There are few cities better to drink in than Dublin. The reason is simple – drinking in Dublin is about more than drinking. Since the earliest days of settlement in the area, more than 1,000 years ago, pubs were a location of true respite. The laborious lifestyle of the early Dubliners combined with the often-inclement weather called for a place of rest, a place where Dubliners could discuss the events of the day or to simply relax, and the Pub was always there.

Dublin remains a great drinking city, with the creation of some of the most well-known beers and spirits rooted firmly in the history and culture of the city. Even now, Dublin pubs remain a place where one can belly up to the bar, talk about your day, grab a pint or a spot of foot and allow the pressures of the day to fall away.

One of our favorite cities in the world, Dublin has no shortage of great pubs. From the iconic and historic, to the hip, new, and trendy, these are the ten best pubs in Dublin.

There are innumerable reasons to love The Brazen Head, an iconic Dublin pub and oldest in Ireland – founded in 1198. 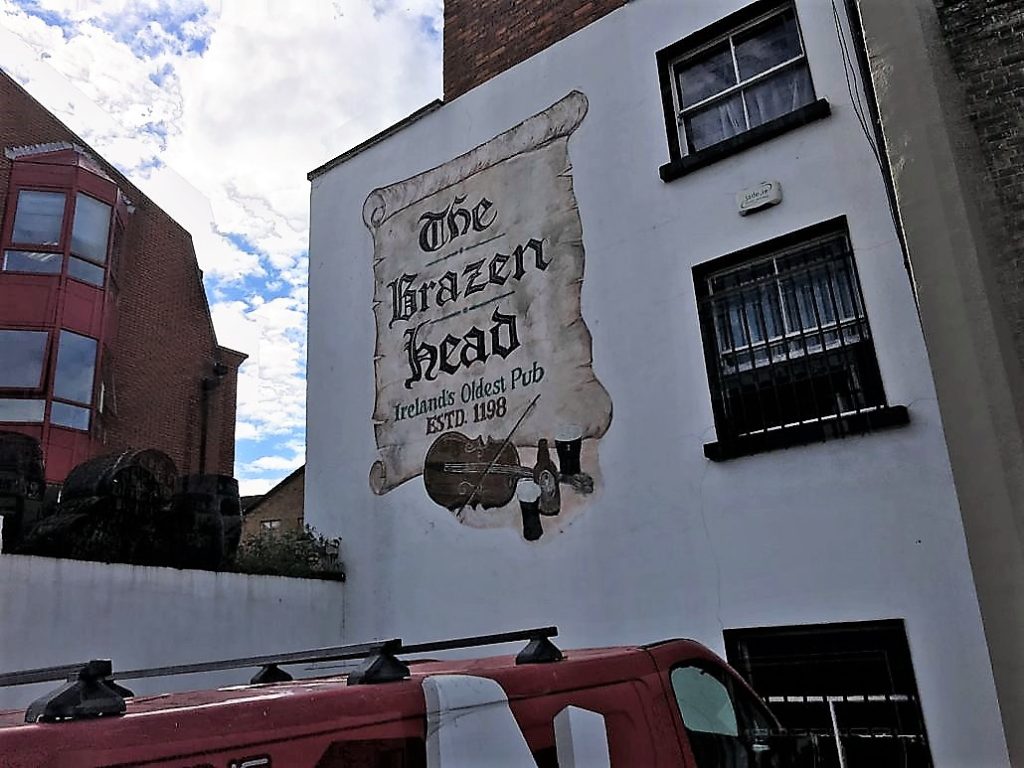 Former haunt of the great Irish author James Joyce, the Brazen Head features traditional Irish music as well as a Folklore and Storytelling dinner series, where Irish historical academics will entertain pub-goers with stories of Dublin lore as well as the earliest days of The Brazen Head, itself. Much of the pub’s history, from archaic relics to original signage, hang in the center area of the bar where it was first established nearly 820 years ago.

Ever-popular with tourists and locals alike, The Brazen Head still ranks as one of the top things to do in all of Dublin, and serves as a place you simply must go. 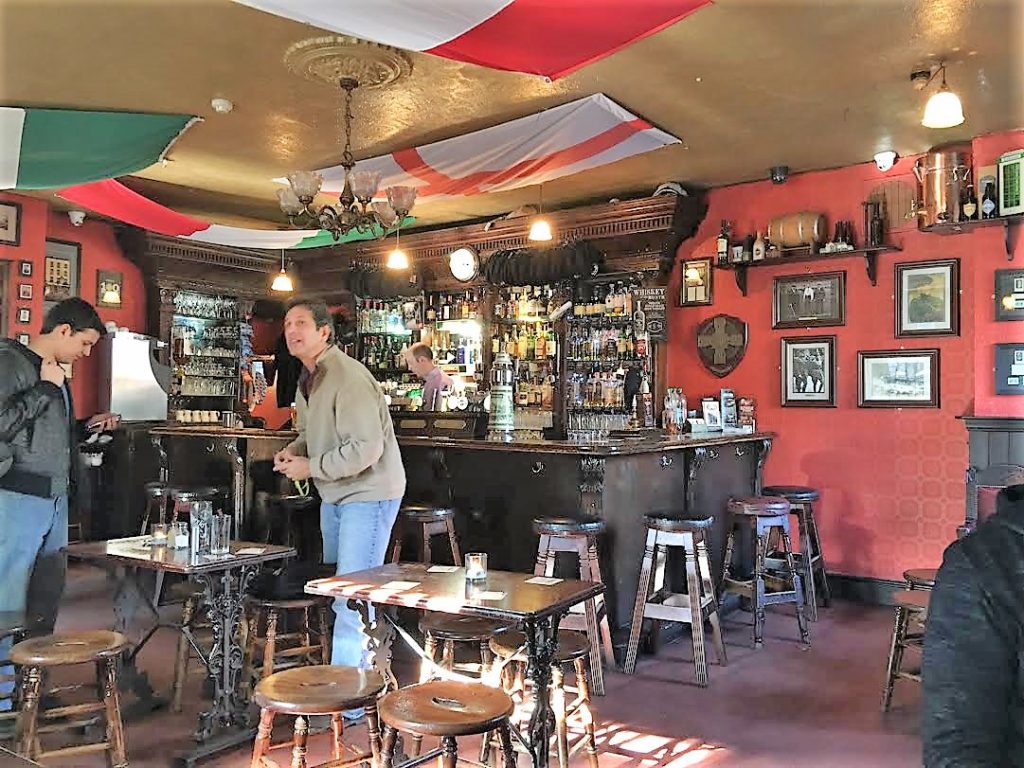 The Nancy Hands, located west of downtown Dublin in the Arbour Hill area, is another bar steeped in legend and historical curiosities. The original owner, named Nancy, started the establishment as a secret drinking den in which she would pass pints through a hole in the wall during a time when pubs were closed to the public in Dublin.

More than 250 years old, The Nancy Hands serves some of the best traditional Irish food in the city and retains its original décor that blends a mix of Victorian-age showmanship with Dublin’s Viking roots. The Nancy Hands is frequented by tourist groups looking to capture stories about relics such as the original Victorian bar and the staircase, which was the first built in Trinity College and the same which was featured in the film Educating Rita, starring Michael Caine. 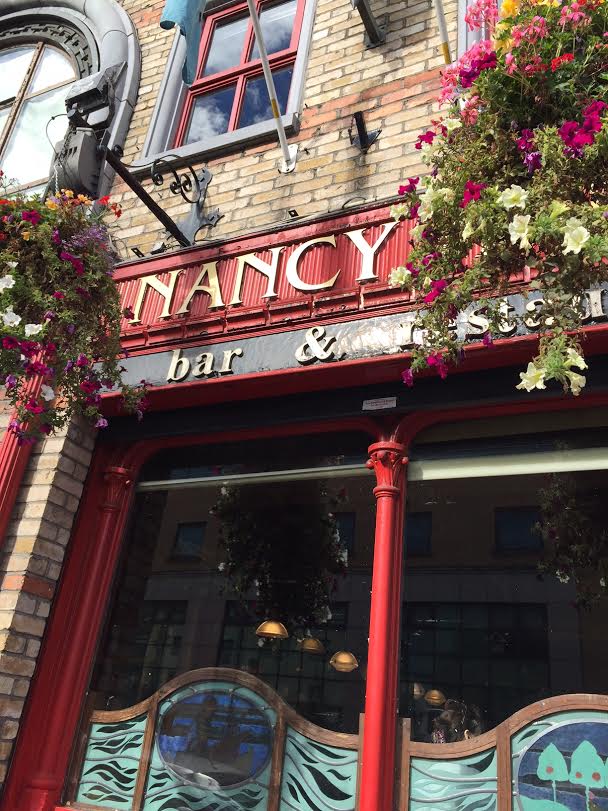 At more than 250 years old, The Nancy Hands is another Dublin legend. 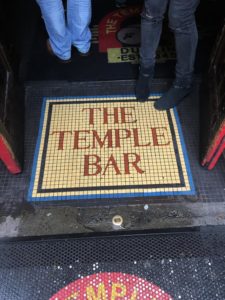 If you’ve ever gone to Dublin, or even wanted to go, you’ve heard of the Temple Bar. So ubiquitous to Dublin is it that the entire primary bar area along famous Grafton Street adorns its name. So famous is it, in fact, that other bars within the district use the moniker for their own establishment.

The real Temple Bar is impossible to miss. The bold, red paint of the exterior walls is rarely visible with the swaths of people, both tourist and local, which hang outside to have a pint, have a chat, and mix with a bit of history. Named for Sir William Temple, the former Provost of Trinity College at the dawning of the 17th century, Temple Bar was established in 1840 and was the favorite bar of numerous Irish luminaries, such as James Joyce and Oscar Wilde. 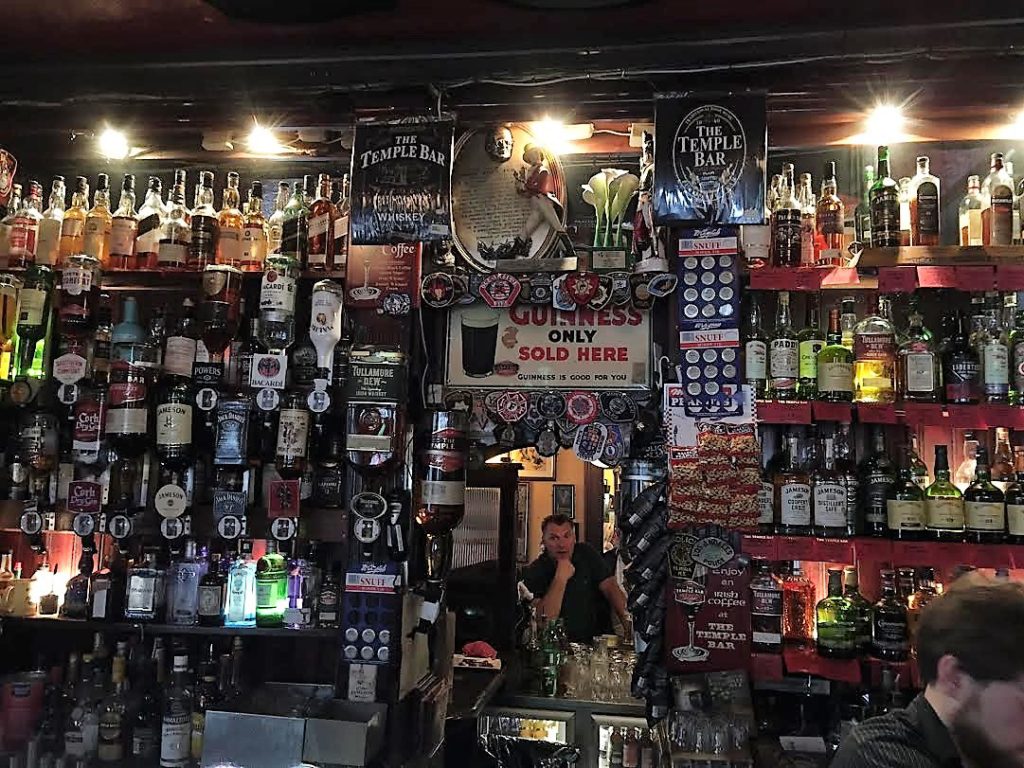 Founded in 1840, the Temple Bar is the quintessential Irish pub.

It’s worth fighting through the traffic to have a drink, as having a pint at the Temple Bar is like having a bit of Dublin itself. Above any drinking establishment in the city, this is the place you can’t leave without having visited. 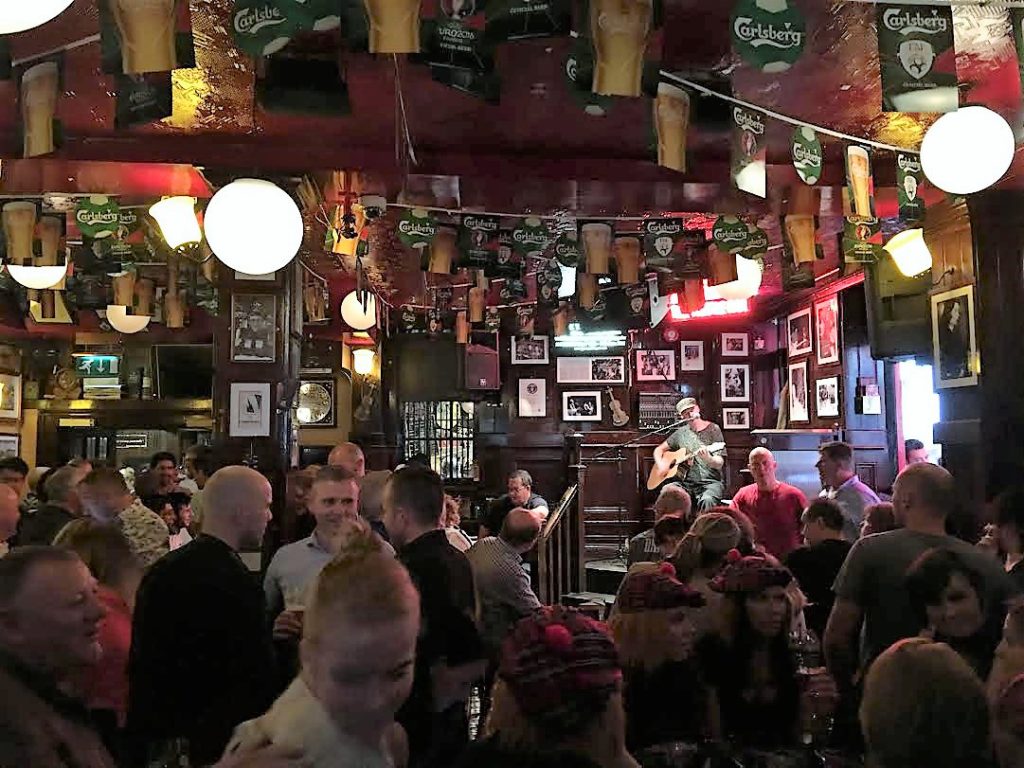 There’s no imitating Dublin’s Temple Bar, a favorite of James Joyce and Oscar Wilde, and locals and tourists alike.

While not the oldest pub in Dublin, something about Grogan’s certainly feels it. Located just two minutes from Grafton Street and St. Stephen’s Green, Grogan’s Pub is perhaps more modern than many of the famed Irish pubs (established in 1899), but retains that same classic, Irish feel.

Grogan’s is known as the favorite drinking hole of numerous 20th century Irish legends, such as poet Patrick Kavanagh, Flann O’Brien and Liam O’Flaherty. The location is even mentioned in O’Brien’s work At Swim-Two-Birds when he says “That same afternoon I was sitting on a bar stool in an intoxicated condition in Grogan’s licensed premises.” 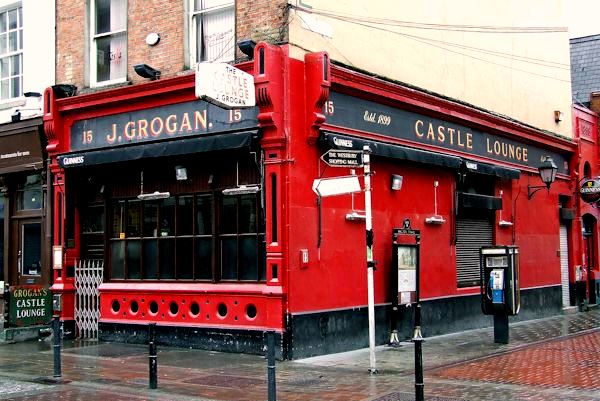 A favorite of poets and locals, as well as visitors, Grogan’s has classic Irish pub appeal. 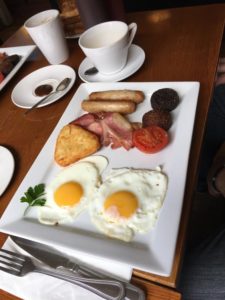 There are few places that are as popular to locals as O’Donoghue’s. One of the best known traditional Irish music pubs in Dublin, O’Donoghue’s features live Irish music seven nights a week, and even doubles as a classic bed & breakfast.

O’Donoghue’s is also a popular spot for incoming rugby and football fans, as those who are looking for a place to stay can do so for as little as 60 EUR per night. This atmosphere combined with sporting fans who have perhaps had a few at the game adds to an already-lively and raucous environment to create a must-see location. If you stay in the hotel, you must get the traditional Irish breakfast – it’s one of the best in the city! 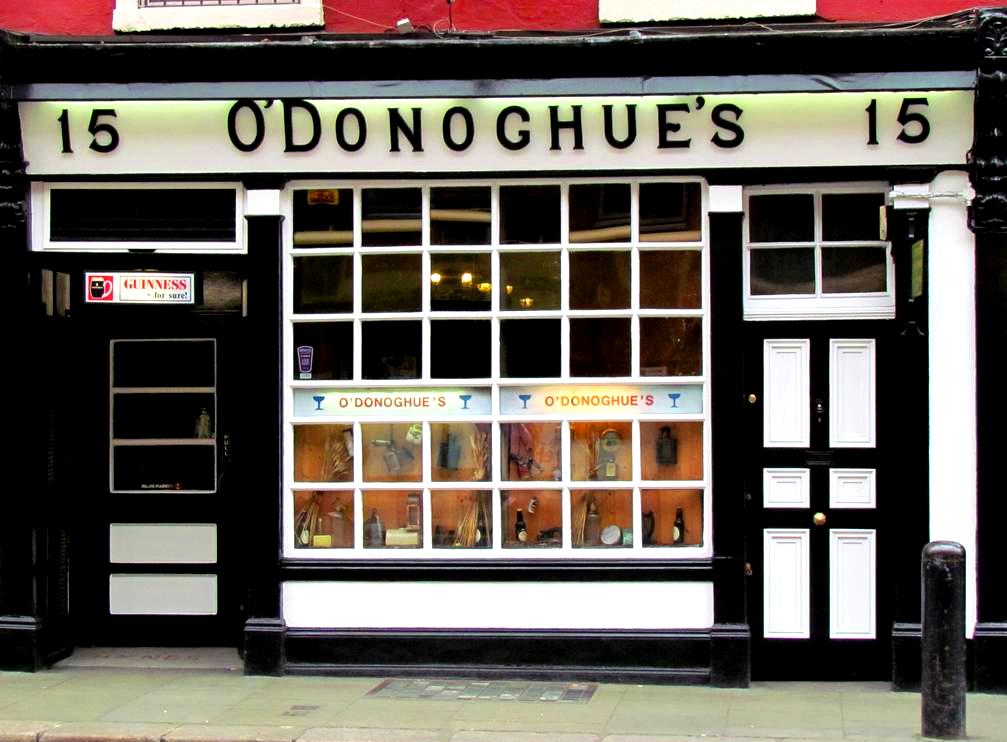 O’Donoghue’s offers live music 7 days a week and also operates as a B & B, with one of the bed breakfasts in town.

Kavanagh’s, owned by the Kavanagh family since 1833, is more formally known as “Gravedigger’s” since its proximity to Glasnevin Cemetery next door. It is said that the pub gained its nickname through years of feeding hungry, grave-digging crews who would frequent the neighboring establishment for breaks and a post-work pint. 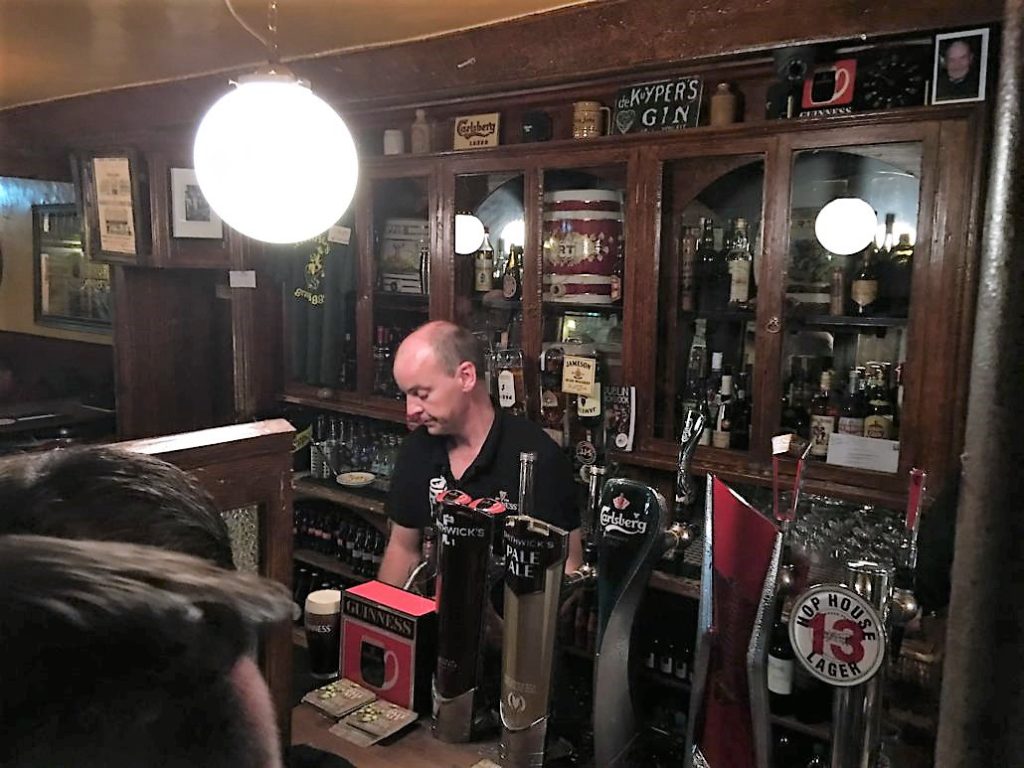 Six generations of the Kavanagh family have operated Gravedigger’s.

The oldest family pub in Dublin, now run by seventh-generation descendant Ciaran Kavanagh, is without question one of the best pubs in Dublin. There’s no music. None. The sounds you’ll hear? The booming of banter and clinking of glasses in a setting that is unquestionably Gravedigger’s. The Gravedigger Ghost Tour ends their tours here, where you’ll get a brief history on Glasnevin. 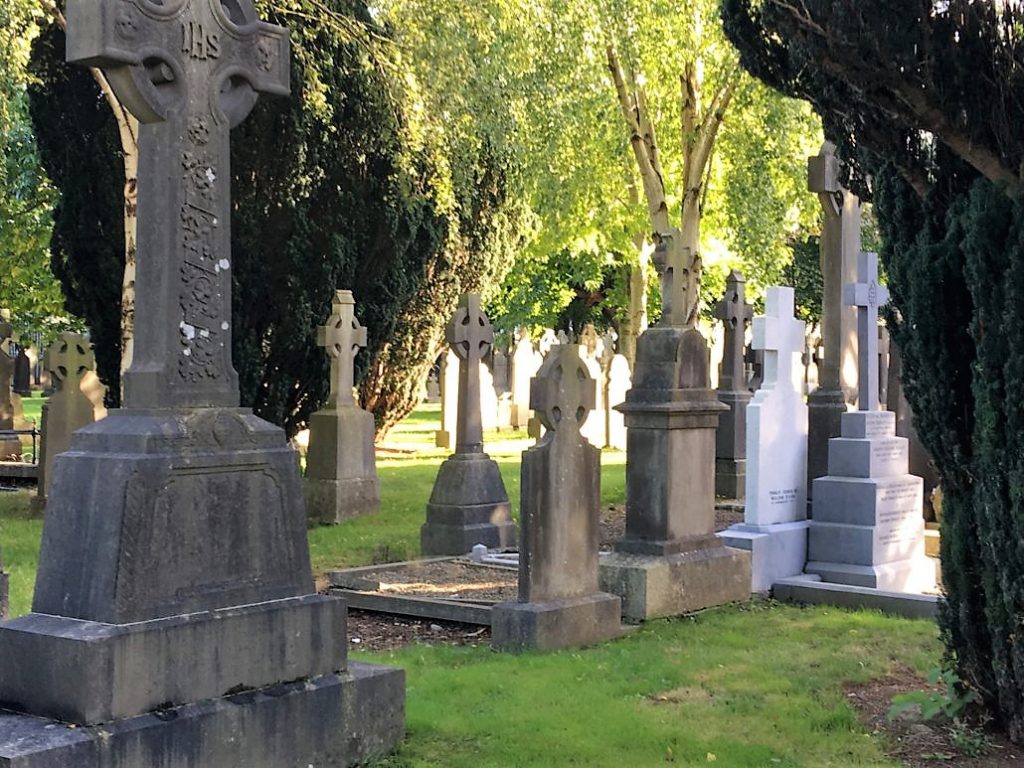 The Cobblestone calls themselves “a drinking pub with a music problem”, and it’s unquestionably true. Traditional Irish folk music rings out from this richly aged bar nightly, making it a local favorite.

Cobblestone is in the Smithfield area, a great tourist location, but the pub itself is less frequented with tourist than Temple Bar or The Brazen Head. In fact, the Cobblestone is as much of a truly local pub as any on our list, and one where you’ll find great surprises in the form of conversation, stories and true kinship that only the Irish can offer.

If you could stomach a spot of food and are in the mood for something authentically Irish, ask for their caudle – a slow-cooked, country stew made typically with bone-in pork, potatoes, and a mixture of fresh vegetables. 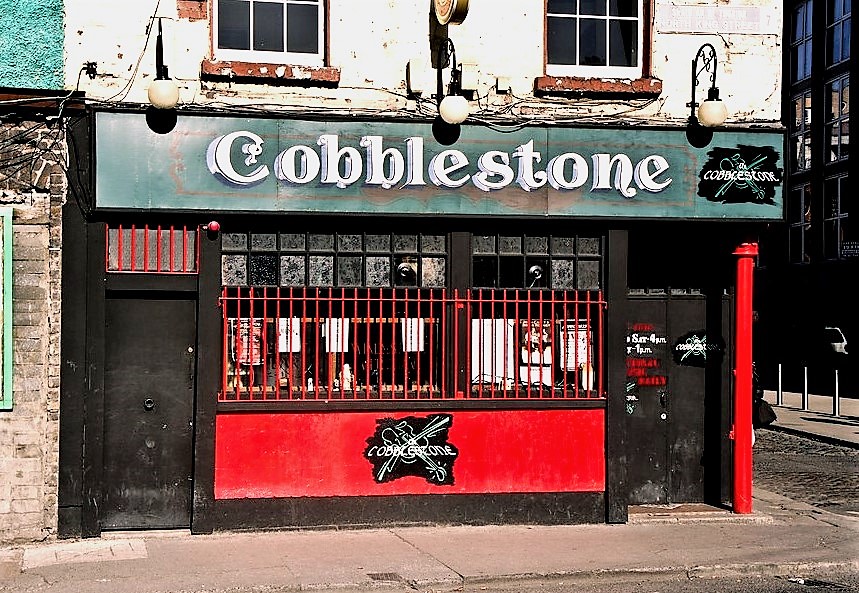 Try the caudle and enjoy traditional Irish folk music at the Cobblestone.

Just when you think all the great pubs are old comes J.K. Stoutman’s, one of the largest and most visually stunning pubs in all of Dublin.

Stoutman’s has both upstairs and downstairs bars to accommodate huge crowds, who come as much for the beautiful décor and they do the drinks. Full of smoky, rich, wood paneling and handcrafted staircases, J.K. Stoutman’s looks the part of an Irish bar on the Titanic.

Will you go because of all this? Possibly. However, what you’ll definitely go for are the food and prices! In addition to the visual appeal of the pub, Stoutman’s boasts some of the best pub grub in the city and among the cheapest pints anywhere in Dublin! 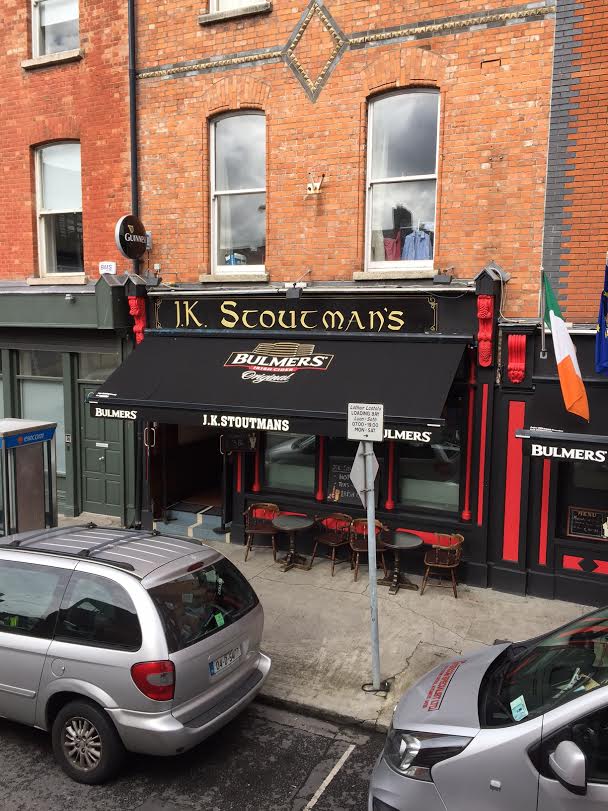 There’s great energy, classic pub decor and some of the best pub food at J.K. Stoutman’s.

Confession Box is a one-of-a-kind establishment with a unique tale. It’s reported that, during the Irish War of Independence in the early 20th century, a Bishop named Daniel Cohalan was one of many who were excommunicated from the Church, and would drop into what was then called the Maid of Erin pub for communion and confession with sympathetic priests who were lucky enough not to have been ousted.

There are memorabilia from this period throughout the bar, making it a living diary of Dublin culture over the past 100 years. What’s another reason to go? The pub has been voted the best pint in Dublin twice in recent years! 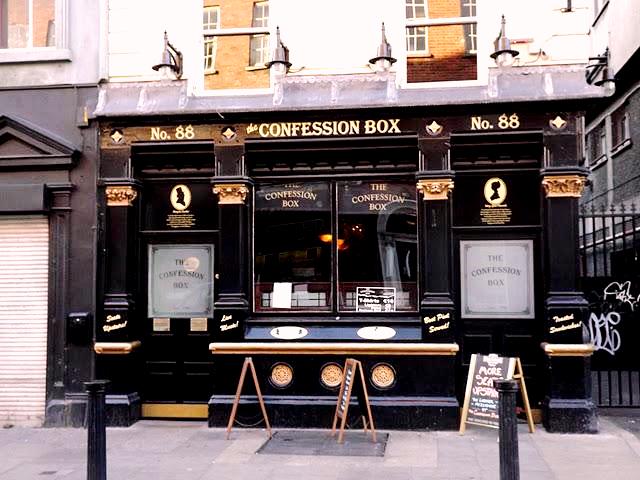 The Confession Box boasts unique history and high ranking as pouring the “best pint” in Dublin.

The Norseman is a famous, original establishment, founded in 1696 and located in the Temple Bar district within 100 feet of the famed Temple Bar, itself. The Norseman maintains a Viking décor that is true to its name externally, but internally it’s classic Ireland.

Rich and brighter inside than most of the old, smoky pubs, the Norseman is a great site for karaoke and live music! The theme changes a bit from front to back, as the true pub entry bar gives way to a more old-school restaurant that serves Irish classics as good as any pub in the district. 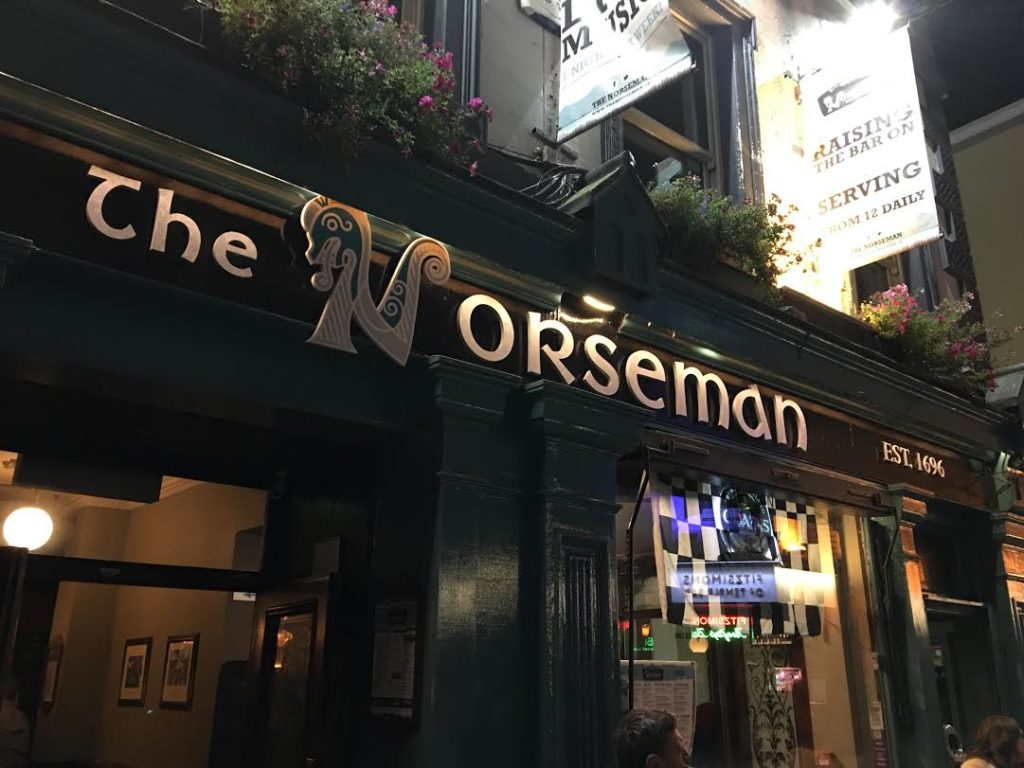 The Norseman was founded in 1696 and is the place to be for live music, karaoke and great food.

A personal favorite, Darkey Kelley’s is attached to the Harding Hotel, and sits along the famous Viking Line that streaks through the city. Darkey’s boasts a broad Irish Whiskey selection in a cozy atmosphere that hosts live music multiple times each week.

Traditional in a sense, Darkey Kelley’s also offers an alternative to the often-crowded bars of the Temple Bar area, as it and the Harding are a mere 100 yards or so away from the beginning of the district. What we love about Darkey’s, so much like Dublin, are the people and the traditional Irish spirit (and spirits!). We started and ended several days here having casual chats with the bar staff, learning about local Dublin legends and cultural not-to-dos for a couple of Americans in Ireland for the first time. 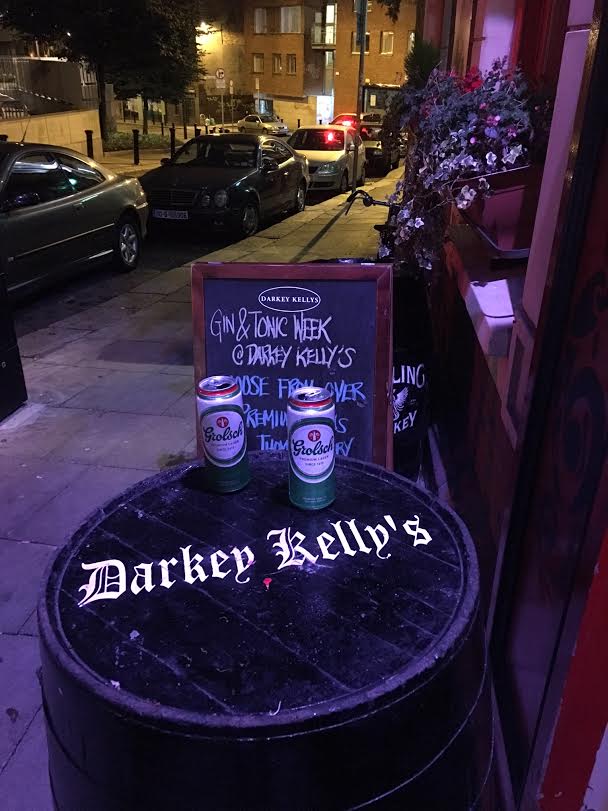 A great selection of Irish spirits and more awaits at Darkey Kelley’s.

The Best Pubs in Dublin

Dublin offers countless opportunities for a pint and a hearty conversation with your fellow man, but what we found most enduring about the city was the connection between seemingly every building and a story.

Behind every pub there is a tale and behind every bar is a tender willing to tell it. While there are hundreds to choose from, we recommend these ten pubs as the best to guide you around the city. 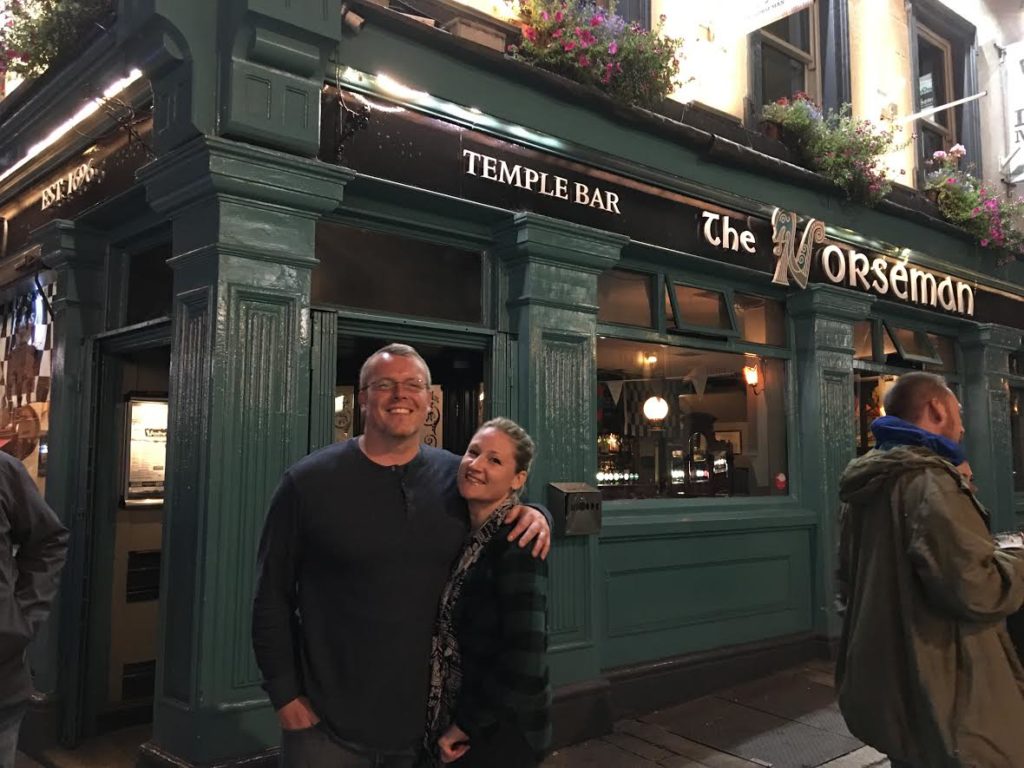 -All photos by Justin and Tracy Uselton.

Justin and Tracy Uselton are the writers of A Couple for the Road, https://www.acouplefortheroad.com/travel-blog/, a couples travel blog that focuses on food, drink and culture written from a personal and artistic perspective for the avid traveler.

Food on Foot: Demet Guzey Shares the History of Eating on Trails and in the Wild