Fulfilling a Dream in Egypt: The Great Pyramid 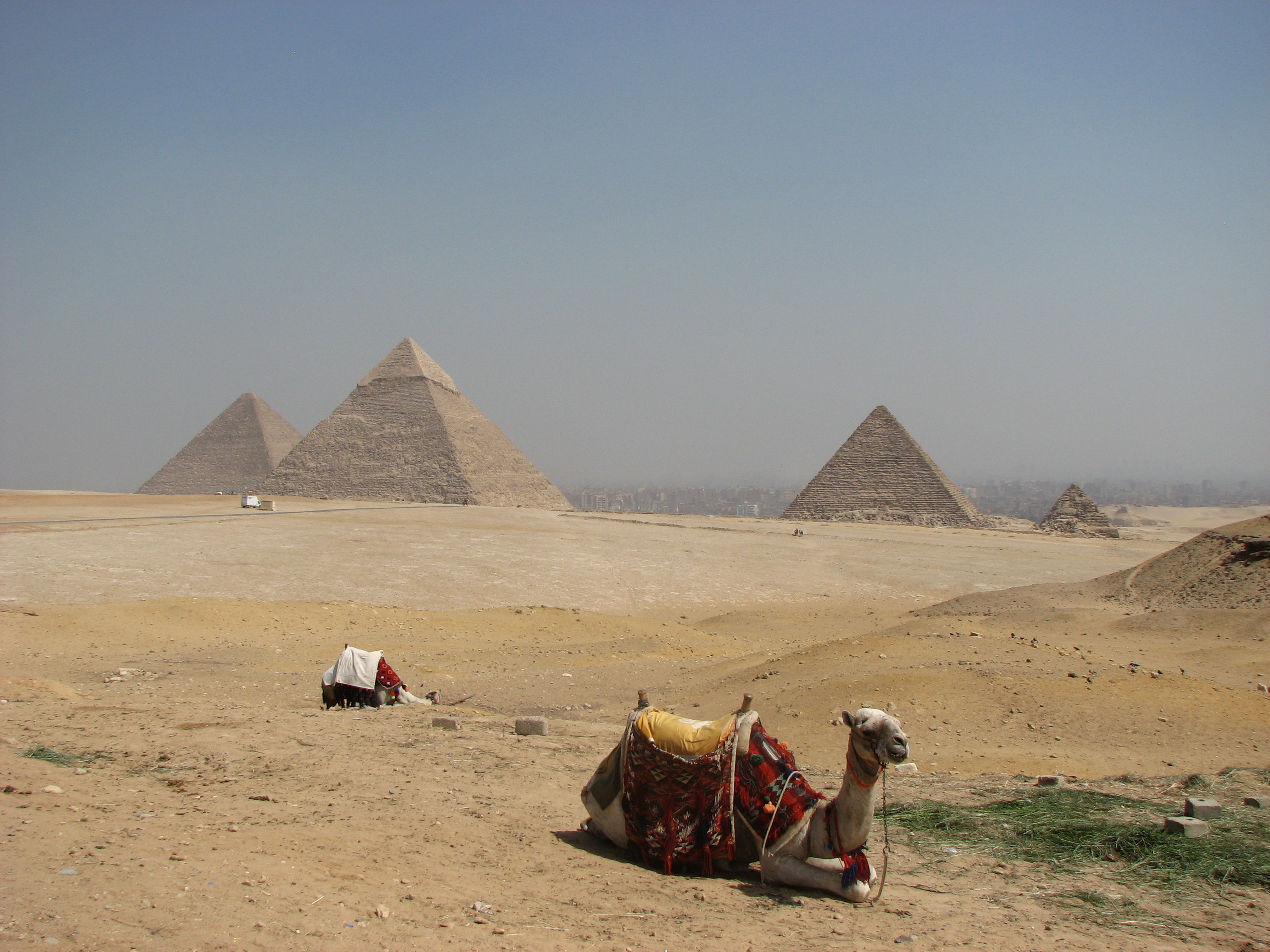 It was Day Two in Cairo and it was as if I were in a dream, though I had slept enough to recover from jet lag. I was standing in front of the Great Pyramid of Egypt on the Giza Plateau. It was no more than ten feet in front of me. I could hardly contain myself: I was about to enter the most enigmatic structure in existence today. My guide, Randa, would not be accompanying me inside so she was issuing instructions: “No Cameras,” “If the guards say ‘bakshish’ it means tip,” “Only spend a few minutes inside,” and “I’ll be waiting for you over there.” 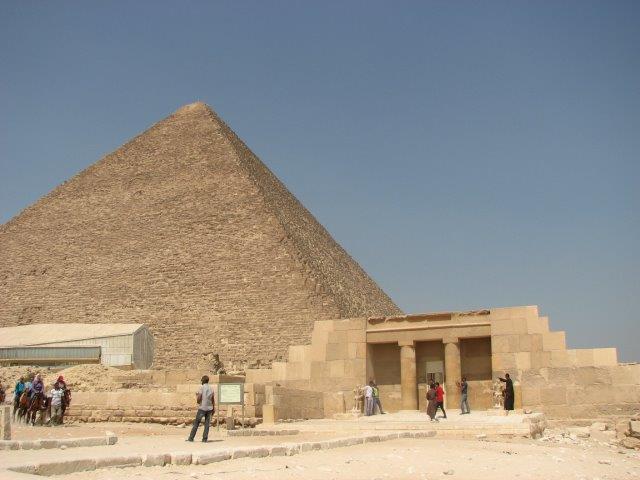 I nodded in response only half paying attention, but suddenly I thought, “Wait, no cameras?” Disappointed, I slowly handed over my camera and she took pictures of me as I turned and began making my way up the large limestone blocks and headed towards the entrance. 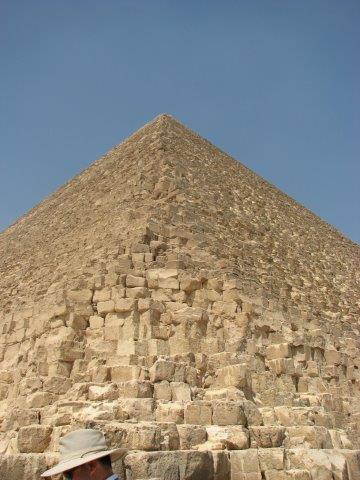 A close-up of the stone exterior. (Photo by Pat Turley.) 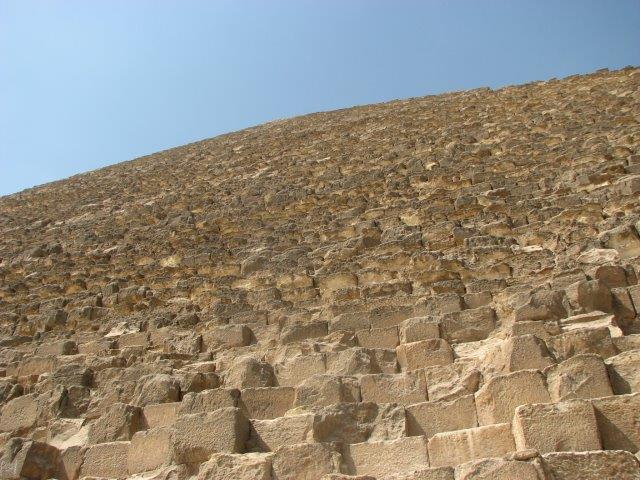 A Long-term Fascination with the Great Pyramid

I had been dreaming about visiting the Great Pyramid for over 20 years. I have been fascinated about it ever since I read my first book about the perplexing structure, and I have read every book I can get my hands on about it since. It is easily one of the most bewildering structures in existence because no one really knows how, when or why it was built. The “conventional” Egyptologists have their theories of course. But as an engineer, I find their explanations do not stand up to elementary scrutiny. There are literally dozens of questions about this structure that have never been satisfactorily answered. 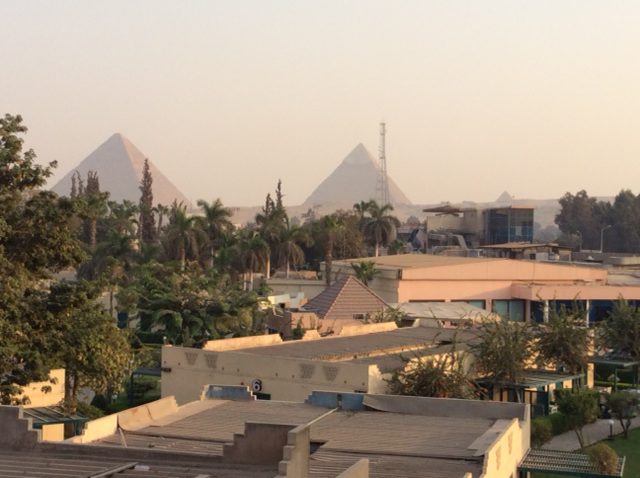 A view of the pyramids from a hotel balcony. The pyramids are close to where people live today, and not isolated from the city. (Photo by Pat Turley.)

Cheop’s son’s pyramid is to the left. Some of the shiny limestone casing at the top is still visible. Most of this casing has been removed over time, but used to cover all of the pyramids. (Photo by Pat Turley.) 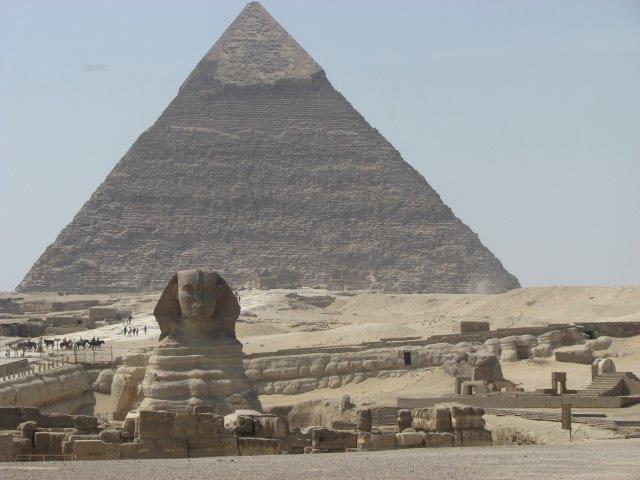 From some angles, the Pyramid of Chephren, Cheops’ son, appears to be larger than his father’s. The pyramid, however, was build on higher ground, which causes the illusion. (Photo by Pat Turley.)

The Mysteries of the King’s Chamber 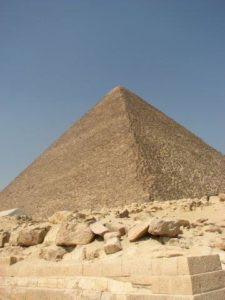 One of the most puzzling questions for me has to do with the one of the chambers inside the Great Pyramid: The King’s Chamber. The so-called King’s Chamber has a large lidless granite sarcophagus inside which apparently never held a body. Unlike the outer limestone blocks, the King’s Chamber is built entirely of granite, one of the hardest types of rocks in existence.

The largest blocks in the entire pyramid are found in the King’s Chamber and some of them weigh up to 80 tons! Sure, quarrying and transporting stones this large was a logistical nightmare, and they certainly had the manpower. But what really puzzles me is the how they could cut and shape the granite so perfectly. That requires more than manpower–it requires technical expertise. When this pyramid was built over 4,500 years ago, man-made iron tools did not yet exist. The hardest chisels were made from copper and bronze – not nearly hard enough to cut granite. Experiments have shown that it would be very difficult for modern man to plan and build this structure as perfectly with all the modern tools we have today. I was about to see all of this for myself; indeed, it was the main reason for this trip.

As I entered the Great Pyramid, I passed a couple of security guards whose job it was to make sure you stuck to the simple visitor’s route and did not wander. I was still in a state of disbelief that I was doing this. The initial passage took me downwards for a bit, but soon I was climbing up a small passage that was only about four feet high. The light was dim and came from light bulbs situated every few feet on the passage floor.

Eventually, this passage emptied out into a much larger chamber called the Grand Gallery where the ceiling was very high and tapered towards the top. It’s a very odd shaped chamber, filled with strange nooks, crannies and notches carved into the stone that don’t make a lot of sense as just a passageway. It had to have some other use, but experts are at a loss as to exactly what that purpose was. I continued up the Grand Gallery until it finally leveled off in front of an odd looking smaller entrance. It was very short and required bending over to pass through, but after about ten feet it opened into a large room. I had arrived! 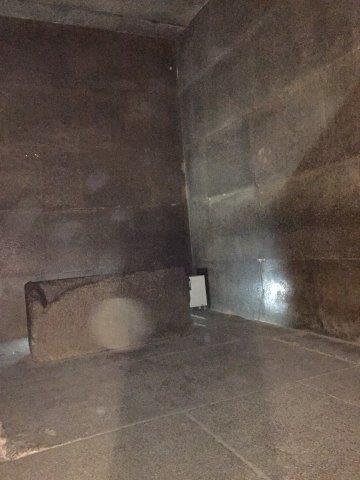 Inside the King’s Chamber. (Photo by Rick Goulian.)

It was quite dim inside the King’s Chamber with light coming from a single bulb in one corner near the sarcophagus. I just stood there for several minutes, marveling at how surreal it all seemed. Eventually my eyes grew accustomed to the dim light and I began to move around and inspect the room. From all the books I had read, I was quite prepared for what this room would look like–and it matched the descriptions perfectly.

What those books could not prepare me for, however, was the odd but exhilarating feeling that came over me as I began to relax and process the experience. I was in a room that was built over 4,500 hundred years ago by ancient builders with only primitive tools and knowledge–or so the conventional wisdom tells us.  The walls, floor and ceiling were solid granite blocks, as expected. I had read how perfectly each of these blocks had been cut and placed. 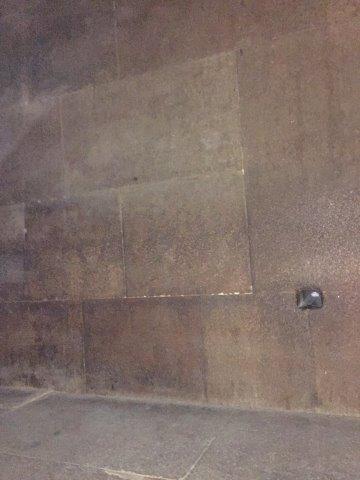 Now, for the first time, I could actually touch them and see the perfection up close. And it was incredibly perfect. Each “joint” where the blocks met was a perfect line—perfectly horizontal and vertical lines and the width would barely fit a credit card.

For a long time, I just walked around the room running my hands along the walls. They were almost as smooth as the granite in my kitchen. Occasionally, another tourist would appear though the small entrance and join me, but not for long. They clearly did not see the awe-inspiring structure for what it was. This stunned me, but it turned out to be a good thing because after about ten minutes I realized that I was completely alone in the chamber. Delighted, I chose a corner near the light and sat down on the hard floor and took it all in.  I could hear distant voices beyond the entrance but for some reason they were not coming into the chamber. I was completely alone in the most fascinating structure in the world; it was almost too good to be true.

I wanted desperately to take pictures to record this moment, and that’s when I remembered: I still had my iPhone in my pocket! Sure, the “rules” said no cameras, but after traveling over 7,000 miles in twenty-four hours, couldn’t the rules be bent, just little bit? I retrieved my phone and began snapping photos. Just a few at first, then some more. I switched it into video mode and began walking around the room taking videos. A new exhilaration rushed over me as I realized I was going to be taking photos of this moment back home with me! The occasional tourist would enter the room and I’d hide my phone, but after they left I’d continue snapping away. 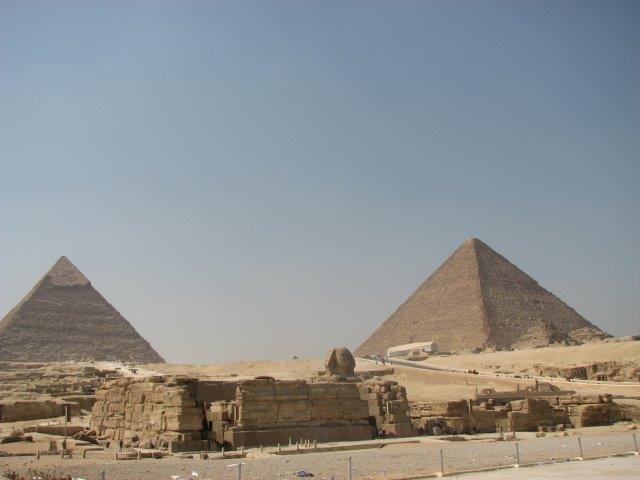 I moved over to inspect the famous sarcophagus. As I had read, this was carved from a single huge block of extremely hard granite. It was larger than the entrance so it must have been built at the same time the chamber was built. The walls and bottom of the container were perfectly parallel, and the inside corners were a perfect 90 degrees. Even if the ancient Egyptians had figured out some way to carve the flat granite walls with some sort of sawing device, how in world did they get the inside corners so perfect? You can’t “saw” an internal corner. Incredible. Amazing. And absolutely mystifying. I did not want this moment to end but I knew I’d have to leave soon.

Suddenly, I heard a guard shouting. I walked over to the entrance and peered out. There was a guard coming towards me. He motioned me out and I followed. I understood that Randa had been asking what happened to me. As I followed him back out of the passageway, he turned and said, “Photo? Shh. Don’t tell.” He wanted to take my picture! So much for rules, I thought. I gave him my iPhone and he snapped a few pictures of me in the dimly lit passage. I gave him several Egyptian pounds and we continued our way out.

Back outside, Randa chewed me out a little. I had been in the Pyramid for almost 30 minutes. She was used to the typical tourist who is in and out in ten, so she was concerned for me. I assured her I was fine and we continued our walking tour of the Giza plateau. But I was floating on air for the rest the afternoon after that exquisite adventure. I saw and visited several other pyramids that day, but for me none compared to the Great Pyramid and the Kings Chamber. I had fulfilled a life dream and it was only my second day in Egypt. 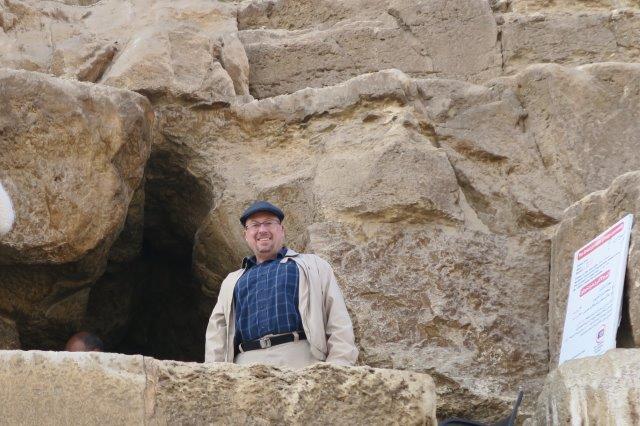 – The cover photo shows the Great Pyramid to the left, farthest to the north. The Great Pyramid has the largest base of each side of the three pyramids pictured, but often appears to be smaller than his son’s pyramid, in the center.  The Pyramid of Chephren, Cheop’s son’s, pyramid is in the center. Photo by Pat Turley.)

– Pat Turley provided most of the photos for this article, as noted. Born and raised a Jersey girl, Pat moved to Oregon in the summer of 1974.  She worked 39 years as a nurse/Nurse Practitioner. She retired in 2011 and since then has spent her time traveling, weaving, knitting, and living in her log cabin in the woods near Portland, Oregon.

AeroPress: A Great Cup of Coffee On the Road