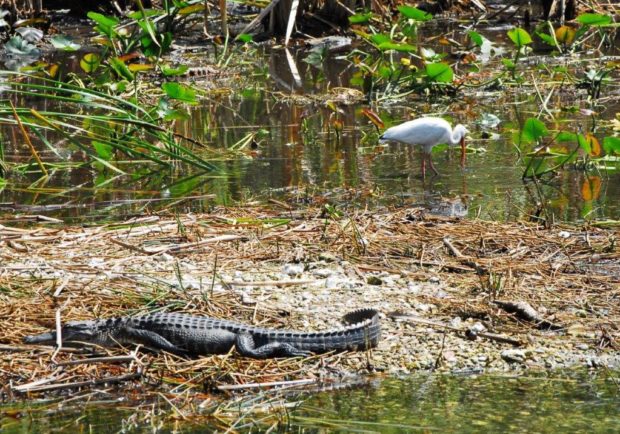 The Florida Everglades; dolphins, alligators and egrets, OH MY! The Everglades’ ecosystem includes an incredible diversity of water habitats and is a sanctuary for birds, reptiles and other threatened species. The Everglades has such a unique natural diversity and beauty and a visit will become one of your most memorable trips. 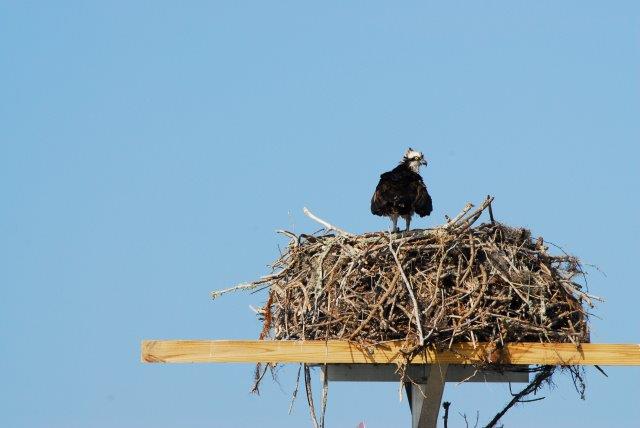 A young osprey in his nest.

Everglades National Park covers the entire southern tip of Florida and protects 1.5 million acres of semi-tropical swamp, marsh, rivers, streams, and an island network known as Ten Thousand Islands. The park was established in 1947 and became a UNESCO World Heritage site in 1979.

Our trip to Florida had us exploring the Gulf side of the state, so we based our stay in Everglades City, where the Park is 60 miles south of Fort Myers, or 90 miles west of Miami. While you could just make a day trip of it, spending at least a night, preferably two or three, is the way to go.

For residents, alligators may be commonplace, but not so for most visitors.

Everglades City is home to 500 year-round residents who don’t have to deal with a single stoplight. The city is two miles long by four blocks wide, and was severely damaged by Hurricane Andrew in August of 1992, the Category 5 storm that moved into southern Florida quickly and is one of the strongest and costliest hurricanes on record. In 2005, Hurricane Katrina hit; also a Category 5 storm, causing $26.5 billion in damage to the affected states.  There is no shortage of stories sharing how slowly the government and insurance companies were to rebuild after these storms.

There is no true downtown core and the main street is not lined with cute boutiques and cafés. Residential streets consist of wide boulevards lined with simple stilt homes. Nor are there a lot of options for eating out, although we enjoyed only great meals at each of the restaurants we visited. It’s a night and day contrast to nearby Naples and much of the rest of Southern Florida, where retirees and tourism created concentrated development. Everglades City remains a place where the natural beauty is the draw. 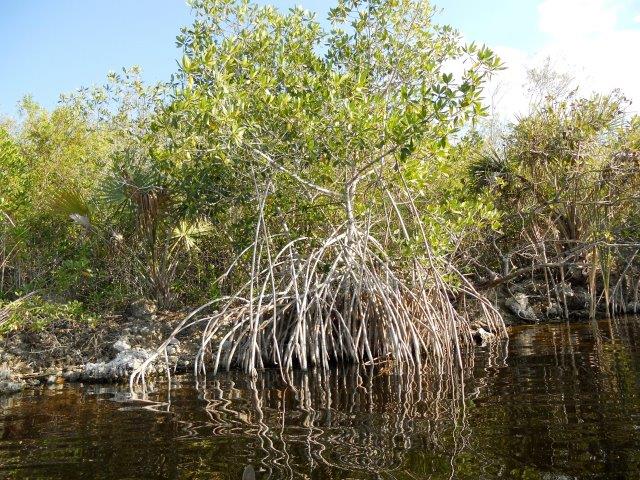 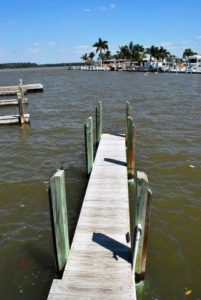 Explore the park and area with scenic drives by car and explore the trails by foot or by bike. Take a hike in Big Cypress National Preserve.

In the Park, we caught the first boat trip out on the water from the Park Docks near the Ranger Station. Our two-hour “Ten Thousand Islands Tour” allowed us to see dolphins and quite a few different bird species, as well as diverse fauna. Unfortunately, we didn’t see manatees. But the mangroves, cypress, and other plant life at every turn, as well as just being out on the water was beautiful. (The salty waters of the Park actually include about 14,000 isles, some natural and some man-made.)

Dolphins at play in Chokoloskee Bay.

Stop by the Waysides

We stopped at many of the signs indicating waysides. We pulled over, parked and walked over to the bridges, boardwalks, or short trails that let us enjoy close-up views of alligators, turtles, and various fish and bird species. 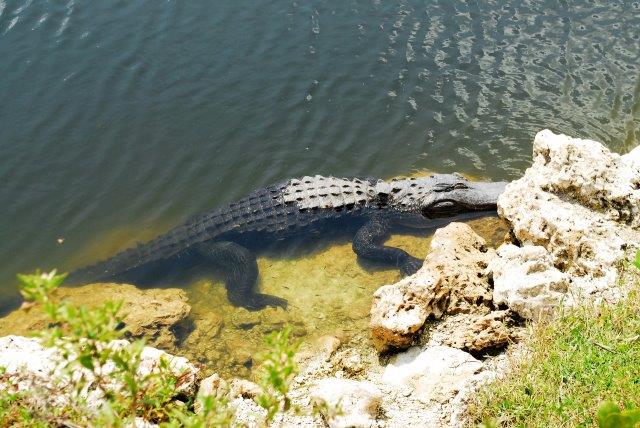 The waysides allow you to view wildlife closeup, but in safety.

One of the more extensive boardwalks took us over a dry bed that really showcased how diverse the area is. 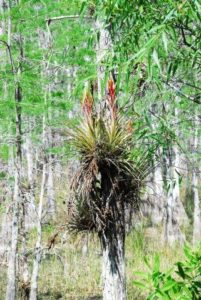 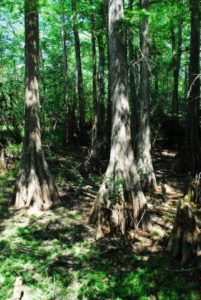 On one trail, we saw a baby alligator, no larger than a foot long. Where a baby wanders, mom may not be far away. (Mothers tend to their young up to three months to one year.) We laughed—but turned around nonetheless. Walking back to the car, we saw a large black, gray and white anhinga. 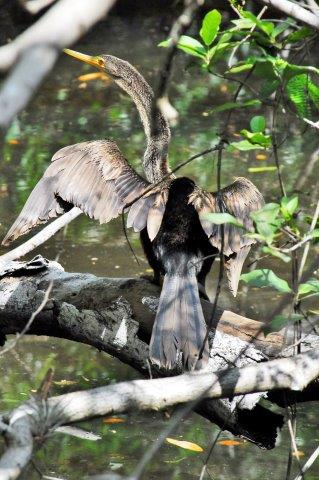 The Everglades is home to an incredible variety of bird species.

And yes, alligators do cross the roads in front of you. We stopped as a large gator lumbered over the road and into the bush. Beats a traffic jam anytime. 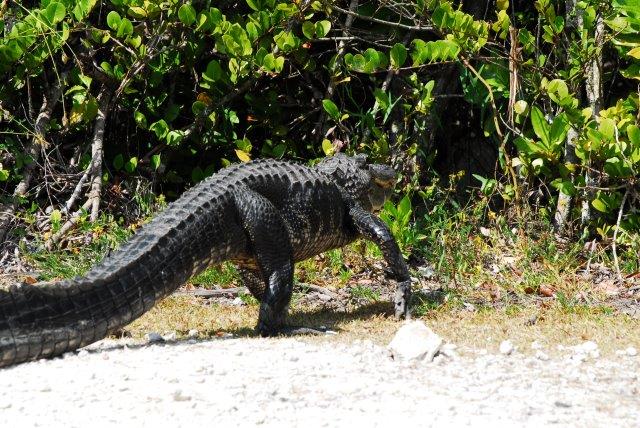 Alligators are truly everywhere in the Everglades. 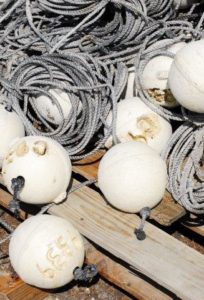 We like Camellia Street Grill as soon as we drove up to the parking lot that shares space with buoys, and fishing nets.  Inside, it’s funky and casual, bare wood beams bracing up the metal roof. Energy was high. Like just about everywhere in the Everglades, the restaurant is on the water; in this case, the Barron River. We sat at a table on the outdoor deck and a live band started playing next to the mint green outdoor bar soon afterwards. 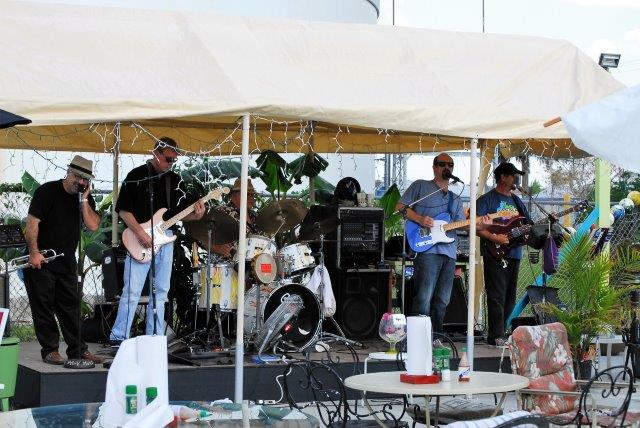 We enjoyed  stone crab, baby back ribs, grilled grouper, seasoned fries, fried green tomatoes, and an herb salad composed of yes, mostly fresh herbs, that we are still talking about. 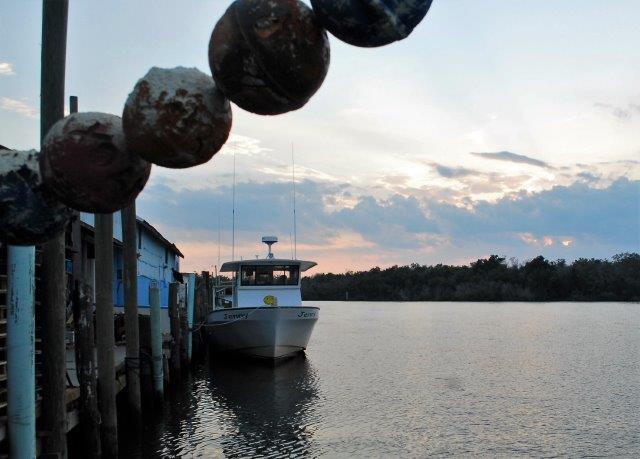 Getting out on the water in the Everglades is a must, and if at all possible, a wonderful way to do that is to kayak or canoe the waterways of the area. We opted for a tour with Everglades Adventures, drawn to their “Paddle into the Twilight” tour. A bit before 5:00 pm, we gathered at Ivey House Bed and & Breakfast to meet up with our guide and other kayakers. It was an amicable and international group, and we spent some time swapping stories about other places we’ve kayaked.

After the usual safety talk, and a great introduction to the history and natural environment of the marshy, saltwater tributaries of the Everglades, we set off. 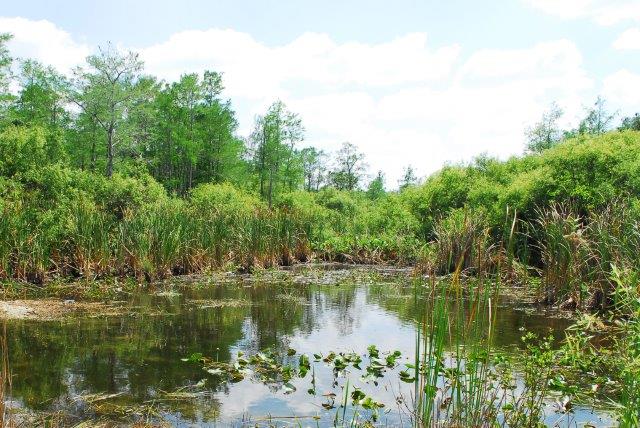 We paddle through a mostly narrow saltwater river, along dense mangroves. Each bend brought a different beauty. 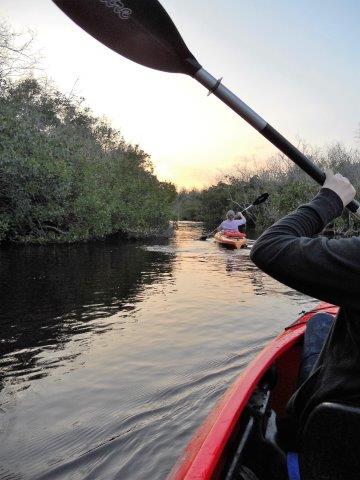 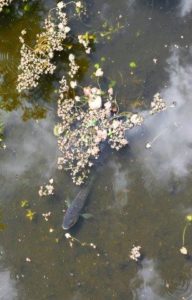 Carp and catfish came up to take a peek at us, and we spotted turtles on the banks and in the water. Egrets, pelicans, storks, heron, ibis and hawks were in the water, in the air, and on the shore.

Alligators lay in the sun and then darted quickly into the water.

We paddled for a few hours, and at dusk, entered a space where the river widened and became almost circular, like a small lake. Gathering our kayaks around, our guide distributed head lamps. We attached glow sticks to the front and backs of our kayaks, then spread out a bit and sat for a while, taking in the big night sky and the silence.

Often an excellent area for stargazing, the moon was especially bright—our visit coincided at a time when the moon was especially close to the earth and it shined large and low. Still, the palm trees are tall, and from low in the water, it got very dark, very quickly. Whereas light had danced through the often shallow waterways earlier, the water beneath us became an inky black. 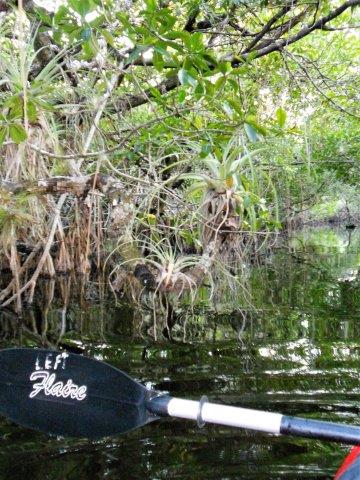 We adjusted to navigating by the light of head lamps and glow sticks. Yes, there eyes poked out of the bank and out from the water. Yes, these eyes that poked out of the water belonged to alligators. At first, we eagerly pointed them out to one another, and then just quietly took it in and enjoyed the experience.  We were quiet, but still flushed out a flock of birds from some tall trees, and as they flew overhead, we heard the beat of their wings. 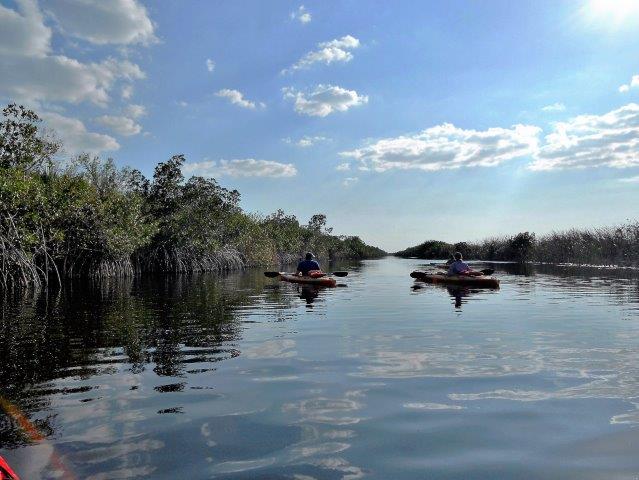 Paddling as the sunset, and into the night was a trip highlight.

I’ve kayaked in quite a few places, but this was one of my most enjoyable paddles.

Where to Stay in Everglades City 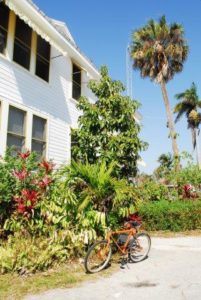 We enjoyed our stay at the Rod & Gun Club in Everglades City.  The hotel has 14 main lodge and cabin rooms. The historic property is on the water, nicely landscaped and rich in tropical flowers and you can arrange boating and fishing excursions. There’s an outdoor pool. 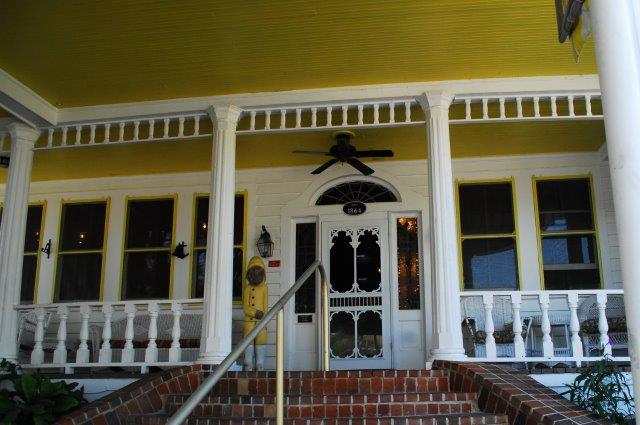 The Rod and Gun Club hotel is right on the water, like nearly everywhere else in Everglades City. 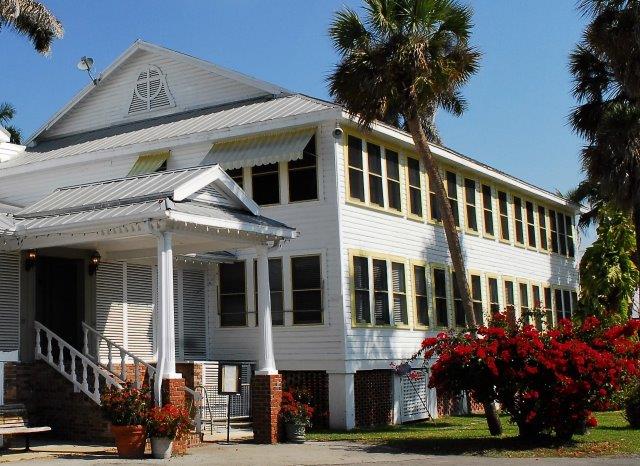 Inside, the lobby’s dim lighting blinded us after the bright sunlight outdoors. Our eyes adjusted to find dark wood floors and paneling, and mahogany, oak and walnut furnishings. There were shutters and tasseled lampshades atop doilies. The walls are covered with framed newspaper articles and town memorabilia, and there’s a pool table in the bar. 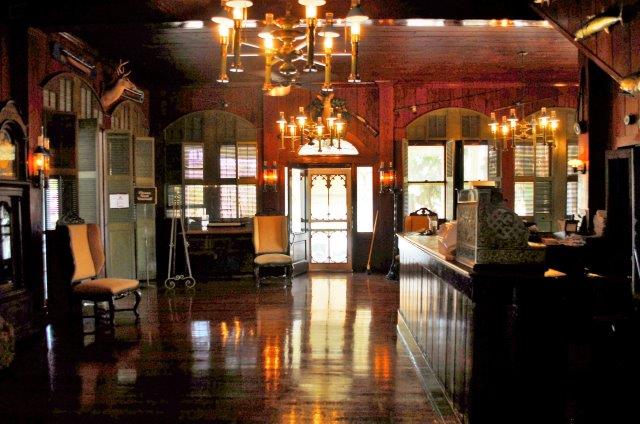 Our basic cabin featured dark wood floors, four-poster beds and a wooden ceiling fan with a palm leaf motif that gave the room a clean, south Florida appeal. (The cabins are freestanding buildings that house multiple rooms, but do not include kitchens or sitting rooms.)

We enjoyed crab cakes and fried blue crab sandwiches and slaw at the hotel restaurant. The food was great, and the water views from the expansive screened-in porch made the meal even more relaxed and full of charm. 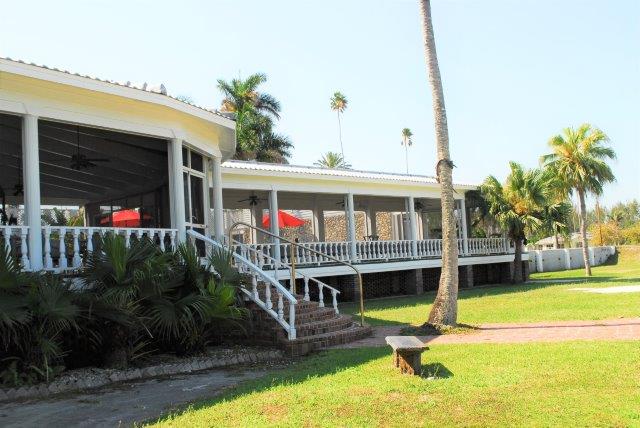 The restaurant inside this light and breezy porch includes a stunning river view.

While we didn’t stay there, another good option appears to be Ivey House Bed & Breakfast. Our kayak trip began at the inn. We arrived a bit early, so wandered the grounds a bit and spent some time in the lobby.

A trip to the Florida Everglades  broadens your understanding of the diversity of our country’s landscape.  A visit will leave you with wonderful memories indeed.