A Visit to the Famous Tsukiji Fish Market in Tokyo 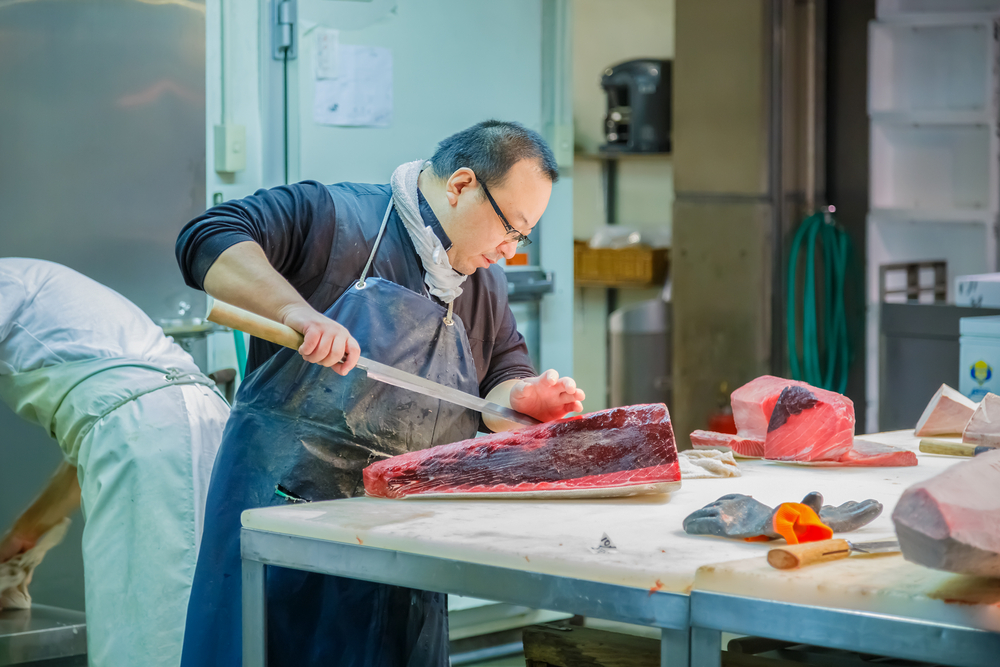 For the next two weeks, we were going to explore Japan by train, so we met our Tokyo guide, Yoko, and collected our Japan Rail Pass; the only ticket we would need for the twenty-five national trains, bullet trains, local trains and cable cars needed to discover the country. Among many other sites, our trip would include a visit to the Tsukiji Fish Market in Tokyo, the largest wholesale fish and seafood market in the world and one of the largest food markets in the world. 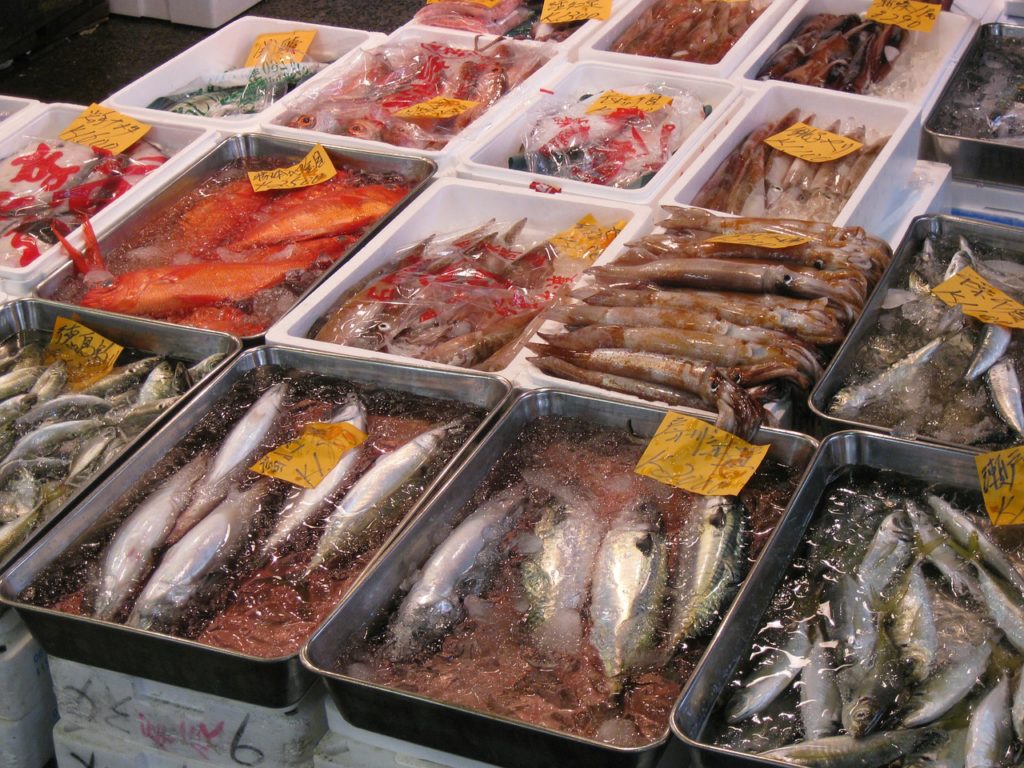 At the Tsukiji Fish Market in Tokyo (Photo by David C. Moore)

The capital, Tokyo, was to be our first introduction to Japanese culture. It is a diverse and exciting city, and like many of those where an ancient past meets a commercial present there are high rise glass offices sandwiching ornate tiled temples, and Michelin star restaurants on the same street as noodle bars. So, our expeditions were equally diverse; including visits to the biggest fish market in the world and a glimpse into the future of IT and sci-fi at the Miraikan, The Museum of Emerging Science and Technology – The Hall of the Future.

A Visit to the Famous Tsukiji Fish Market in Tokyo is an excerpt from Turning Left Around the World by David C. Moore.

We had been alerted in the briefing notes from our agents Audley that Japan is a very formal and ritualistic country, they are dignified people with many customs, so we did our best to familiarise ourselves with as much as possible so as not to offend. These included not pouring a glass of wine for yourself, never blowing your nose in public and the necessity of wearing brightly coloured toilet shoes when the need arises – it is a terrible faux pas to forget to remove them when you leave the toilet.

This was going to be a challenge trying to decipher the 2,000 or so symbols in the Japanese language and find our way around the stations, let alone the country. I discovered a wonderful app that allowed me to point my smart phone at the station monitors and get an instant translation from the thousands of kanji character hieroglyphics, it very nearly worked. 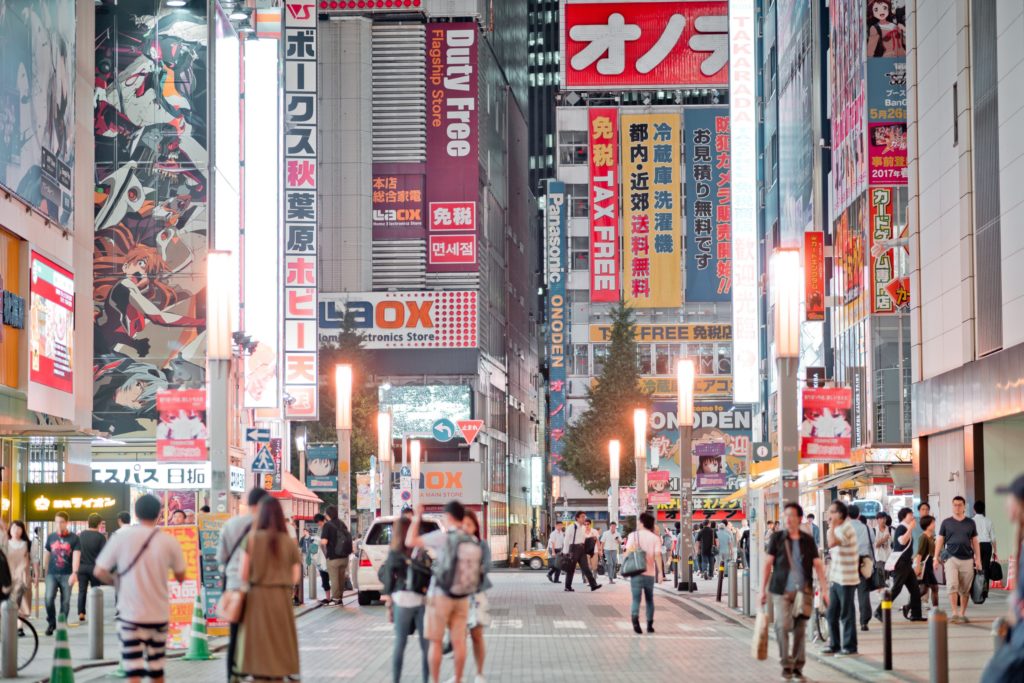 Tokyo, in all its neon glory (Photo by David C. Moore)

Hotel in the Shinjuku District

Our city hotel was in the Shinjuku district, home to the busiest station in the world, where the equivalent of the entire population of Canada passes through each fortnight. It’s big, and easy to be overwhelmed by the sheer choice of subways, platforms, escalators and ticket barriers. But we soon learned that a bemused look while staring up at the hieroglyphics of the flashing train board will prompt a bow and the question “Can I help you?”

So, it was up early for our first train, a short hop to Tsukiji fish market to trace the process and preparation of sushi. It is the largest wholesale fish and seafood market in the world and one of the largest food markets in the world – all the data seems to have been supersized in Japan. 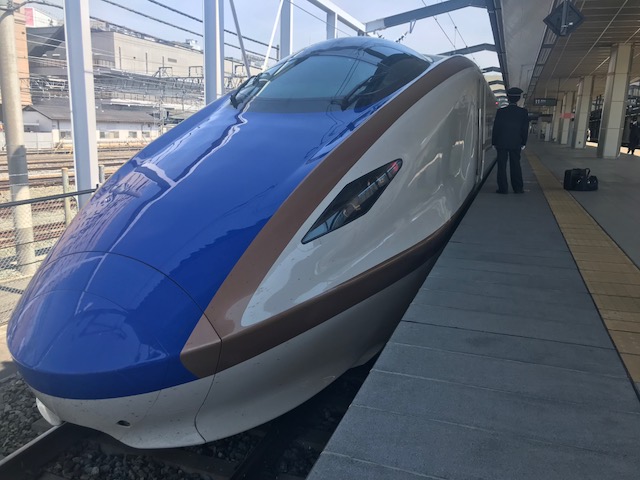 The Tsukiji Fish Market in Tokyo

The Tsukiji Fish Market in Tokyo handles over 800 metric tons of seafood each year with a total value of 600 Billion Yen (approximately $5.4 Billion). 450 different species of seafood are bought and sold, from the cheapest seaweed to the most expensive caviar, including tiny sardines and 300 kg tuna. And, it must be said some controversial whale species.

The market has been in business since the 1600’s when Tokyo was known as Edo but was moved to its present site in 1923 after the Great Kanto Earthquake, which devastated much of the city.

The tuna wholesale buying and selling starts extremely early at 3:00 AM when the vast tuna are sold in that mysterious and covert environment of a trade auction. Wholesalers, accountants, distributors, auctioneers and all sorts of officials and traders in white coats carefully examine the fish to establish a market price and bidding commences. 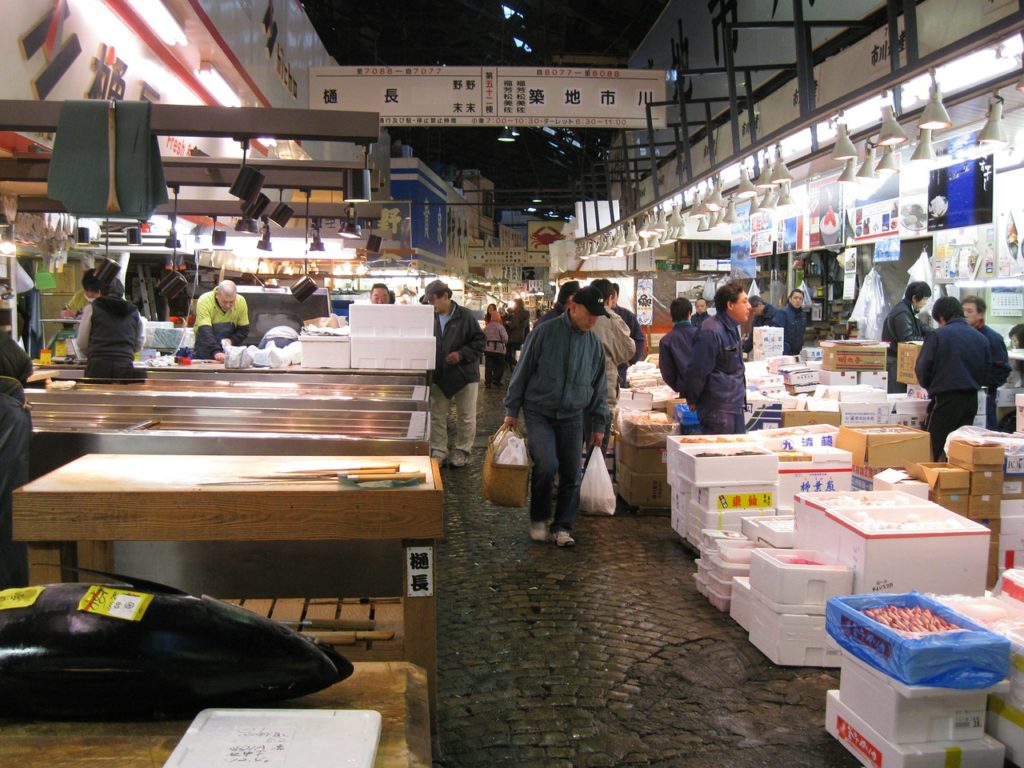 At the Tsukiji Fish Market in Tokyo (Photo by David C. Moore)

The auction  at the Tsukiji Fish Market in Tokyo is fast and furious, and I was never really sure who bought what. Once a final bid is secured the fish are covered in a large damp white cloth and wheeled away on a steel gurney by the gentlemen in white coats looking rather disconcertingly like porters in a morgue. 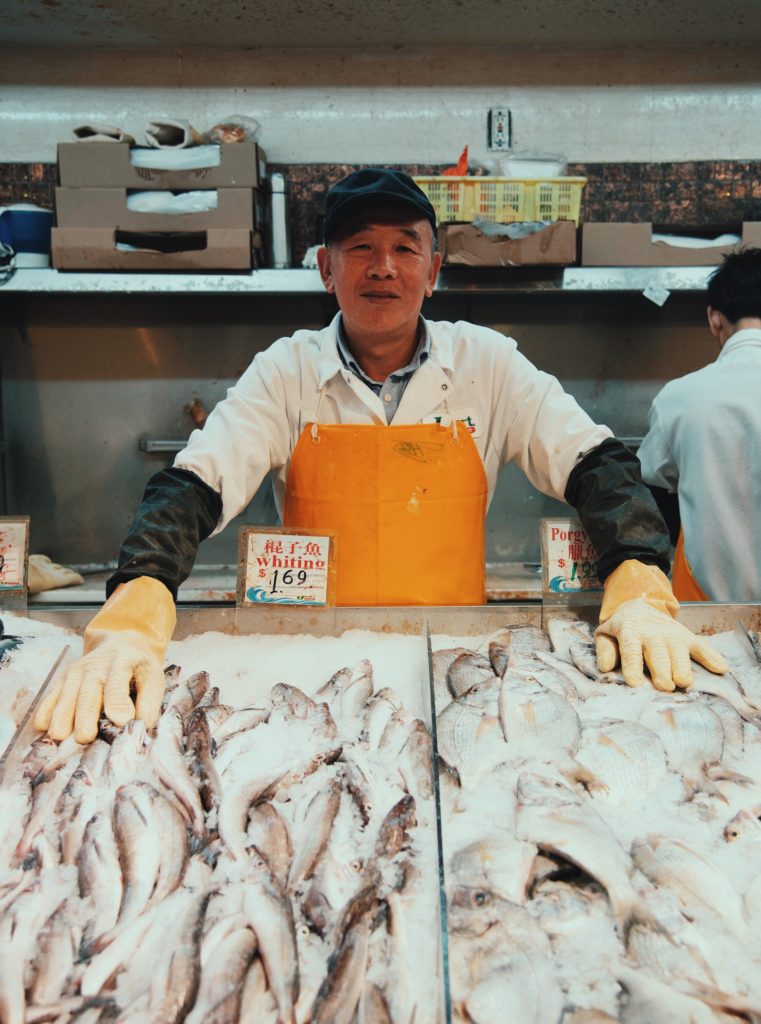 A fish trader at the (Photo by David C. Moore)

The filleter, if that is the correct expression, treats the “body” with enormous respect as he and his assistants lift it onto the thick wooden operation table for surgery. It is carefully cleaned with more damp cloths in preparation and he selects his choice of instrument, what looks like a narrow samurai sword, about a metre long and honed to a fine sharp edge that slices through the skin and flesh with ease. 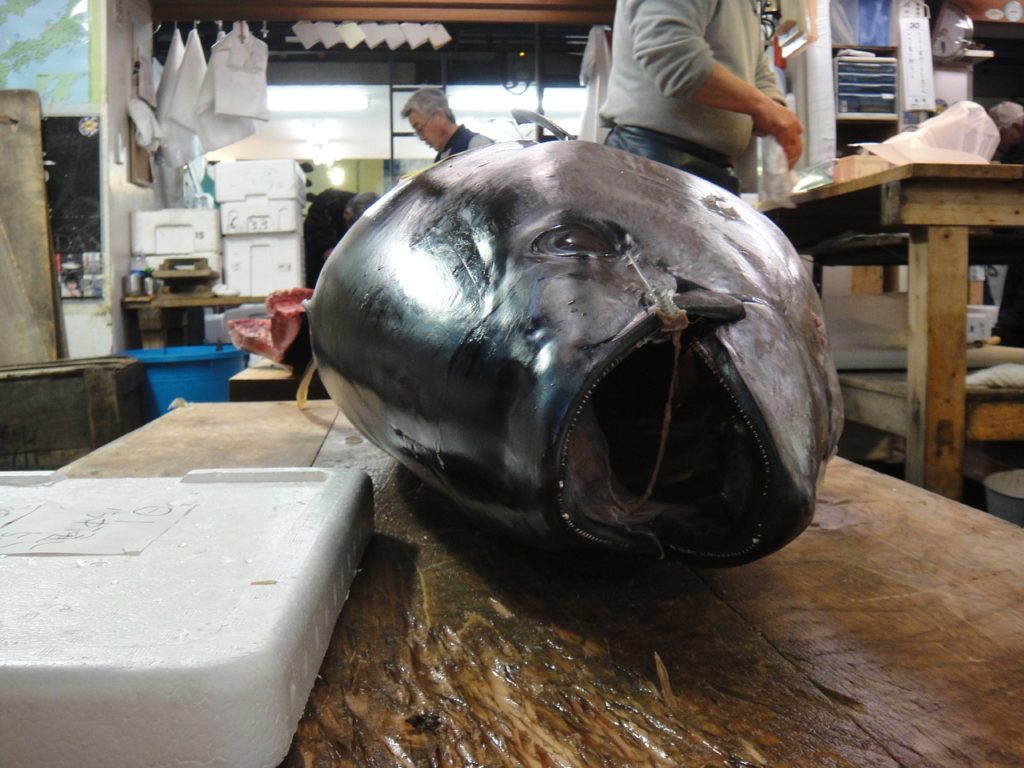 A tuna at the Tsukiji Fish Market in Tokyo (Photo by David C. Moore)

Now in more manageable sized fillets, but still the size of a fishing boat’s fender, the traders start selling to the retailers and sushi preparation specialists. The same samurai sword is used to delicately slice a thin sliver for tasting, there is much muttering and discussion as both the wholesaler and sushi master compare tasting notes, a quick bow and the deal is done. The fleshy tuna is then wiped down again with the damp cloths and often assiduously cut into smaller pieces before careful wrapping for the customer.

Surrounding the market are dozens of small restaurants offering sushi and sashimi breakfasts, perhaps the freshest in the city. What a treat, somehow it tasted a whole lot better watching the sushi being prepared in front of us with just as much respect as the wholesalers and retailers had shown and knowing the short journey this wonderful food had been on. 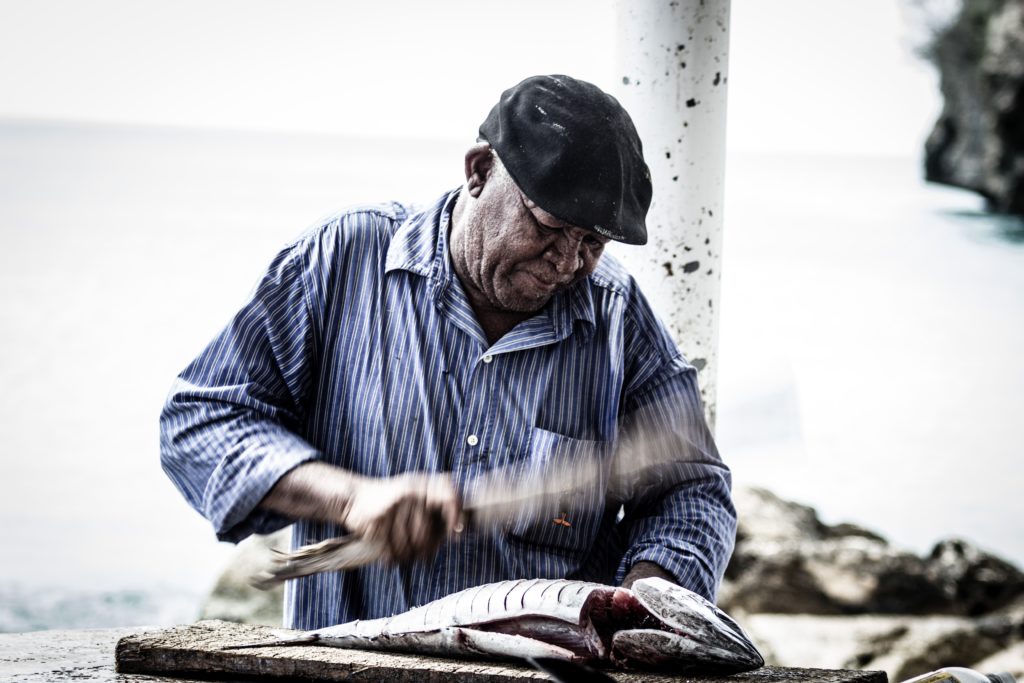 “Meet Asimo,” our Honda representative said at the Miraikan Museum.

Asimo is a walking, talking and remarkably, thinking robot about five feet in height and made of shiny white plastic.

“Good day, I am Asimo,” said Asimo walking over in a rather bent fashion.

“Good grief,” said Helene, looking somewhat unsure of how to converse with the real-life version of i-robot.

“Say hello, Helene,” I encouraged, “you don’t want to hurt his feelings.” 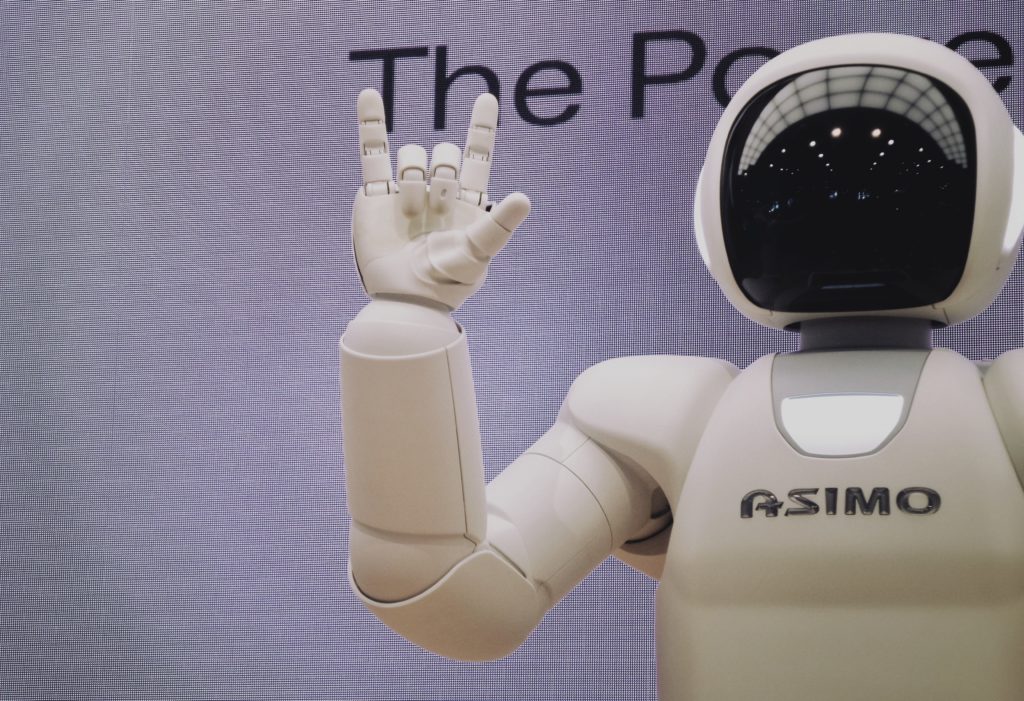 “Er…hi,” she said, holding out her hand and quickly withdrawing it.

“Shall I sing you a Japanese song?” Asimo asked, “I can show you the hand actions as well.”

Asimo sang his song, now in a female voice and showed the small crowd the accompanying hand actions apparently explaining the song about the high green mountains and fresh pink blossom. When the song was over there was a sprinkling of applause. Do you really applaud a robot? Who knows, if Honda has their way, we will all probably find out very soon. 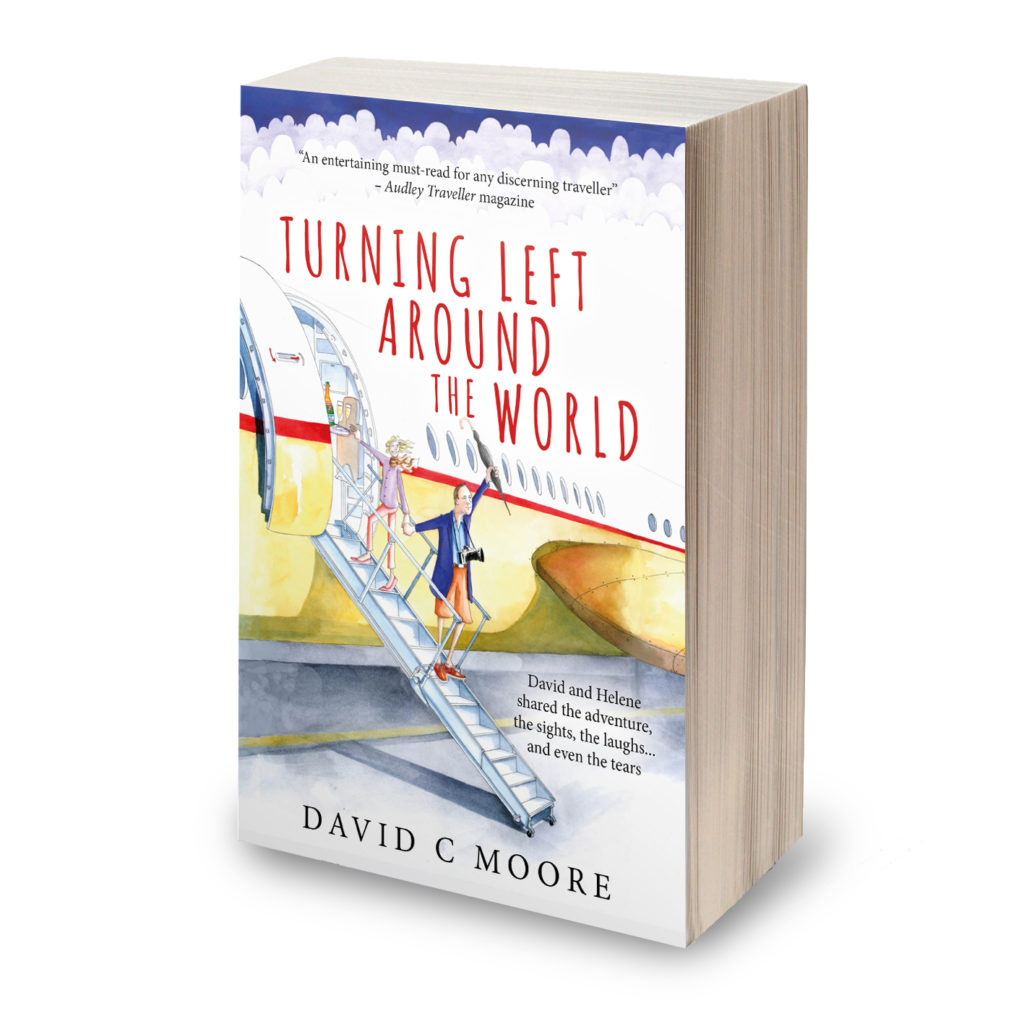 Turning Left Around the World, by David C. Moore

-All photos, including cover photo, by David C. Moore.

David Moore owned and managed a London marketing agency for 15 years creating advertising campaigns to promote iconic international brands including Mars, Kellogg’s, Renault, Disney, Boots and Coca-Cola. Following the sale of his agency in 1999, he became one of the leading Consultant Marketing Directors in the UK steering businesses in the launch or relaunch of their consumer brands. For more information on David and Turning Left Around the World, please visit the author’s website: davidcmoore-author.com/ and follow him on social media.

Car Travel with Pets: Top 10 Tips for Safety and Security

A Flamenco Experience in Granada, Spain