A Flamenco Experience in Granada, Spain 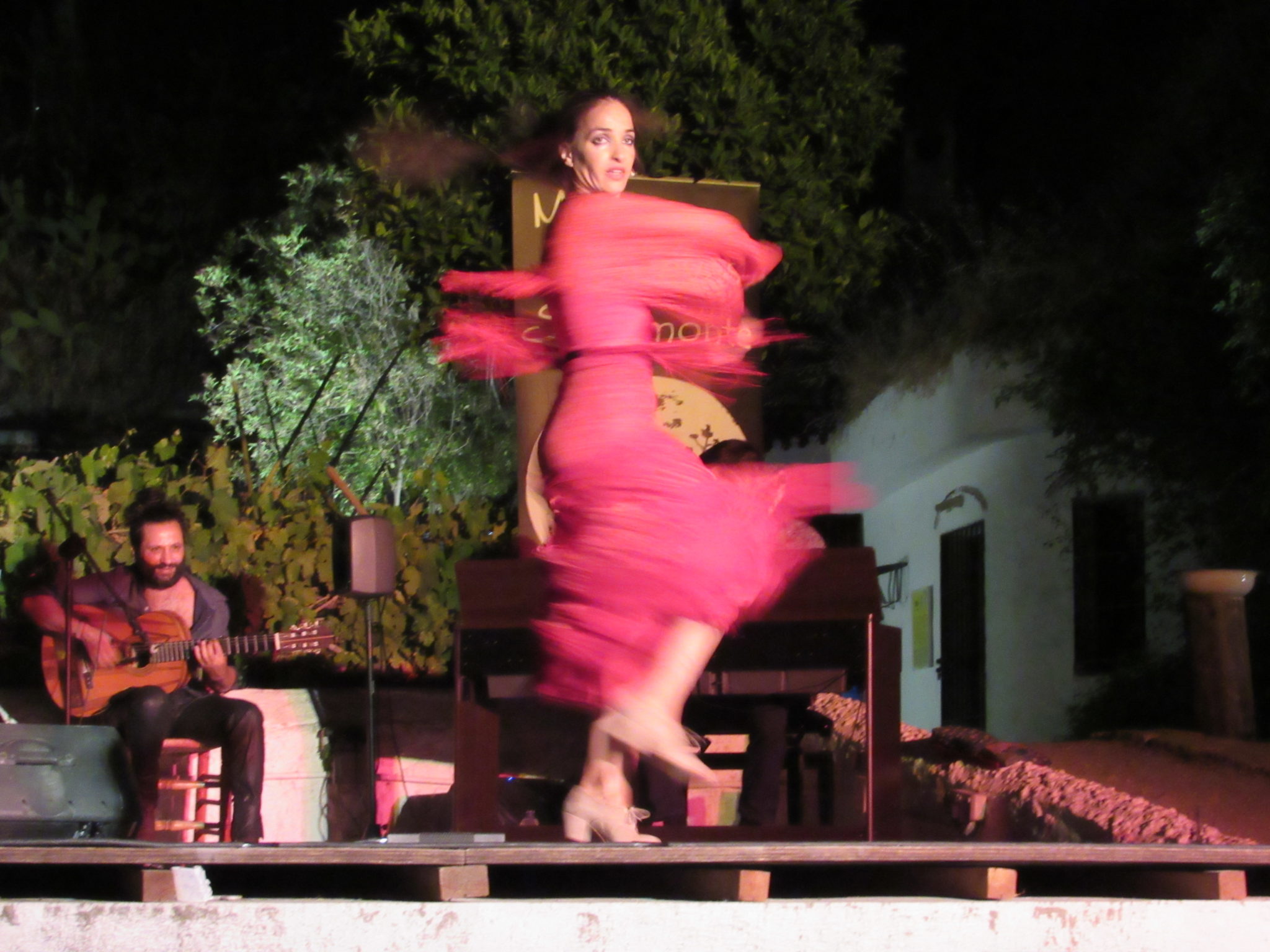 Although the image of a flamenco dancer can tend to be a seen as an outdated stereotype of Spain or as something that is primarily for tourists, in many cities in Andalusia it is still an important part of life and culture. In many communities in southern Spain, it’s still practiced as a community art form. There are still many people for whom flamenco is a vocation, a passion, or simply a favorite pastime. I’m happy to share with you some ideas about how you can plan your own flamenco experience in Granada.

I have been fortunate to spend significant time in Granada during three of the last five summers while studying at the University of Granada. Although I wasn’t there expressly for the purpose of studying flamenco, as a student, teacher and performer of flamenco in the Pacific Northwest, I made sure to take maximum advantage of my free time there to experience flamenco in as many ways as possible. 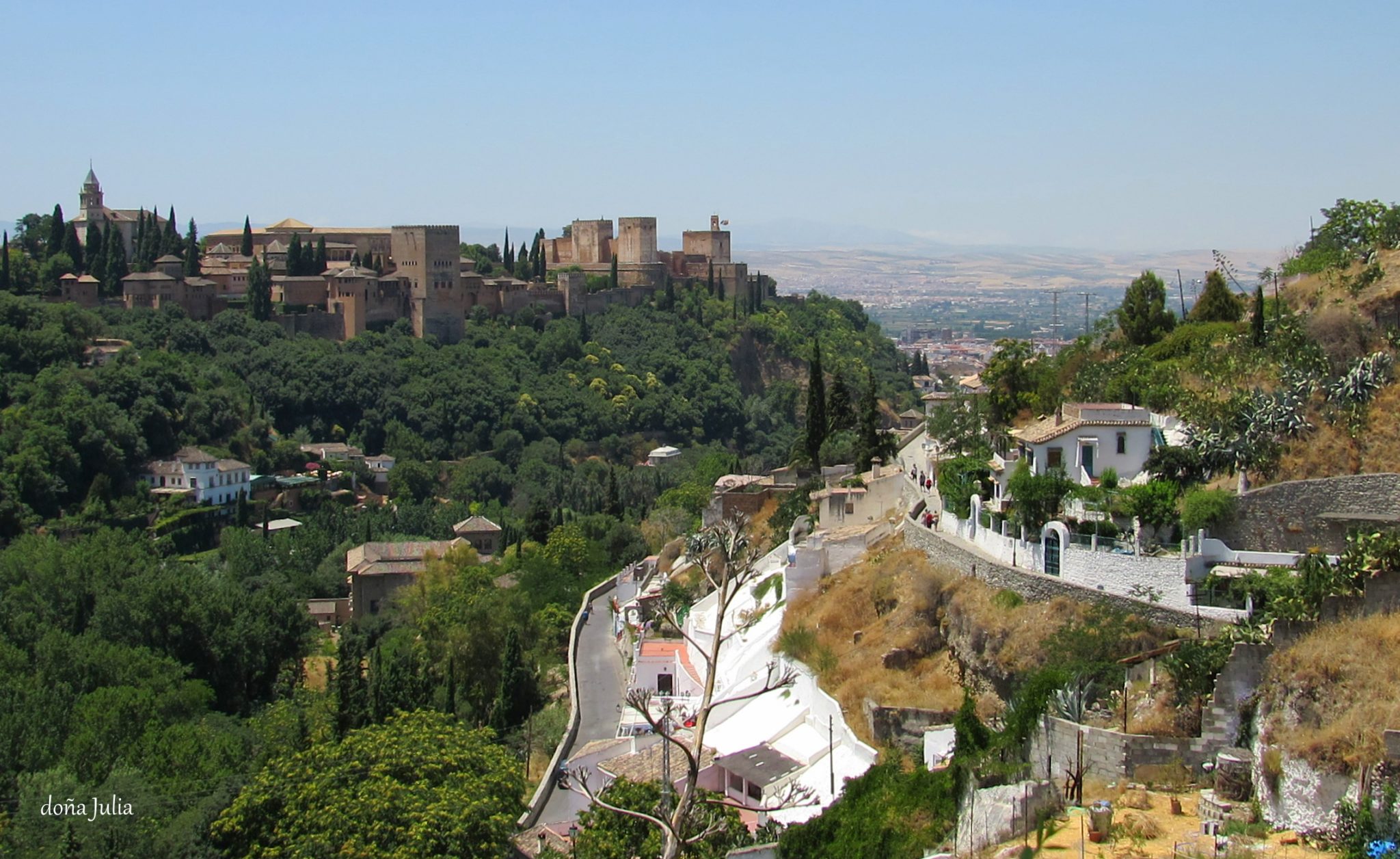 Where You’ll Find Flamenco in Spain

The most important cities for flamenco are Jerez, Seville, Cádiz, Granada and Málaga. Although many consider Jerez to be the cradle of flamenco, Granada presents some serious competition for that title, not least because of the Gitano, or Roma, heritage there, notably in the Sacromonte district, known for its cave homes and flamenco tablaos.  Granada offers a wide abanico, fan, of options, whether you’re interested in seeing a traditional flamenco show, learning flamenco dance, singing or guitar, or studying flamenco history. 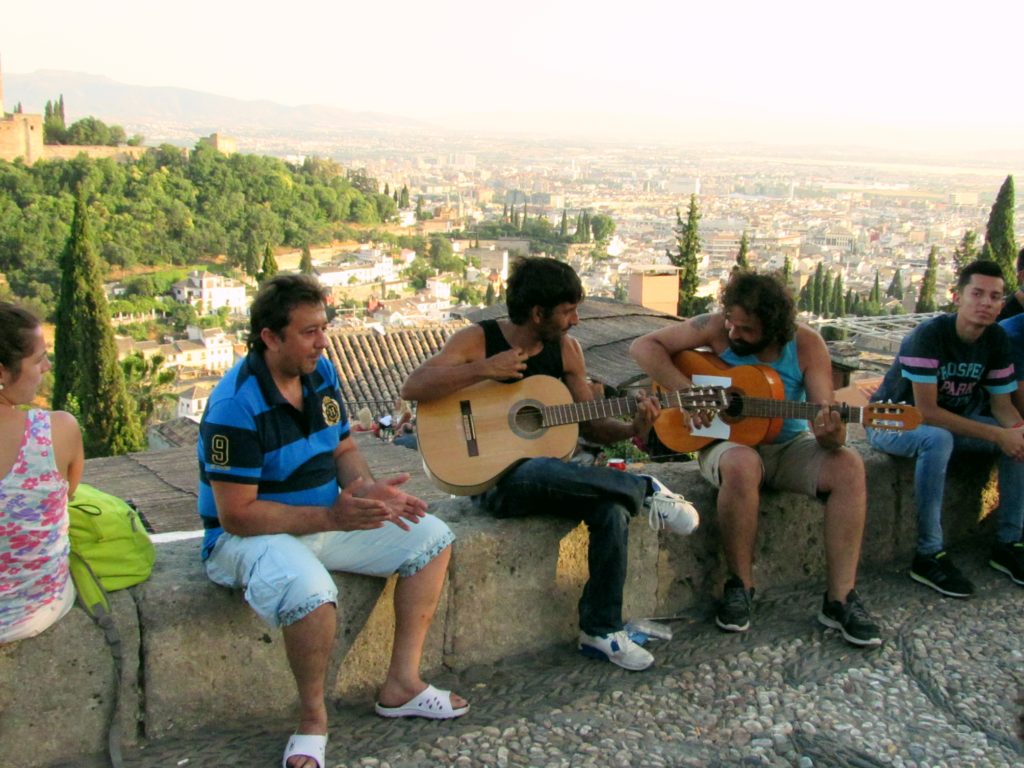 Where to See Flamenco in Granada

It’s hard not to find flamenco in Granada. There are often street performers in the biggest plazas, and just walking through the Albaicín and Sacromonte districts, you’ll hear it in doorways and through open windows. However, if you really want to plan a full flamenco experience, here are several different options. 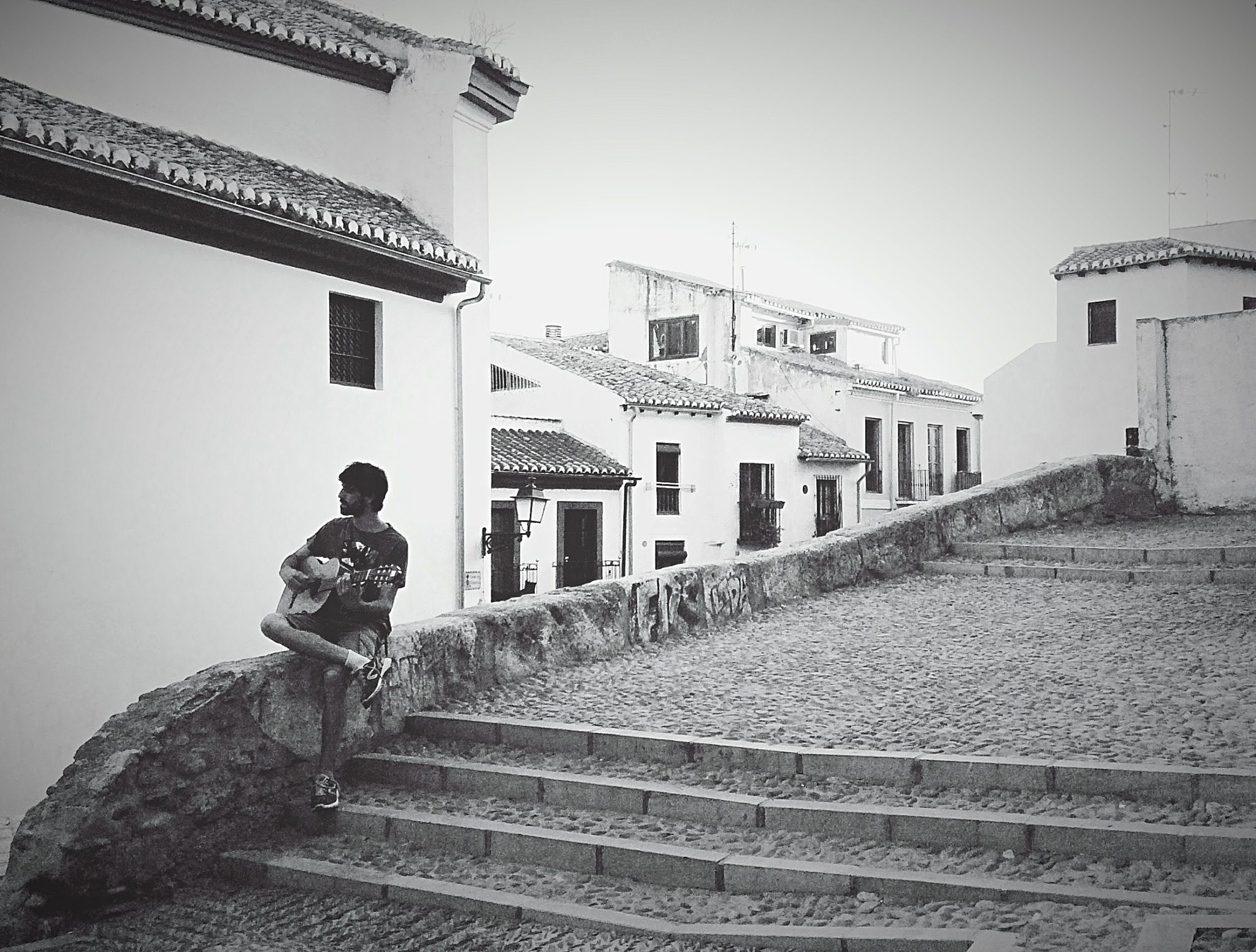 A lone guitarist in the Albacín (Photo by Julie Pacheco-Toye)

The most visible and easiest to access flamenco shows in Granada are the shows offered almost nightly at the most famous tablaos in the Sacromonte district and the Albaicin district. Many hotels and tourist offices sell packages to see shows at these venues. The packages include drinks and/or meals, and often even transportation between the hotel and the tablao. These shows are usually very traditional, mostly attended by tourists, and can be quite expensive. Even so, they are high quality, and still have the feel of an intimate artistic experience. A few of the cave tablaos include Venta del Gallo, Cueva los Tarantos, Zambra María la Canastera, and Cueva la Rocío.

If you’re looking for something a little less “touristy,” but still a high quality show in a traditional atmosphere, some good choices are Jardines de Zoraya, El Templo del Flamenco and Tablao Albaycin in the Albaicin district. At some tablaos, you can also enjoy some great food and drinks with the show. 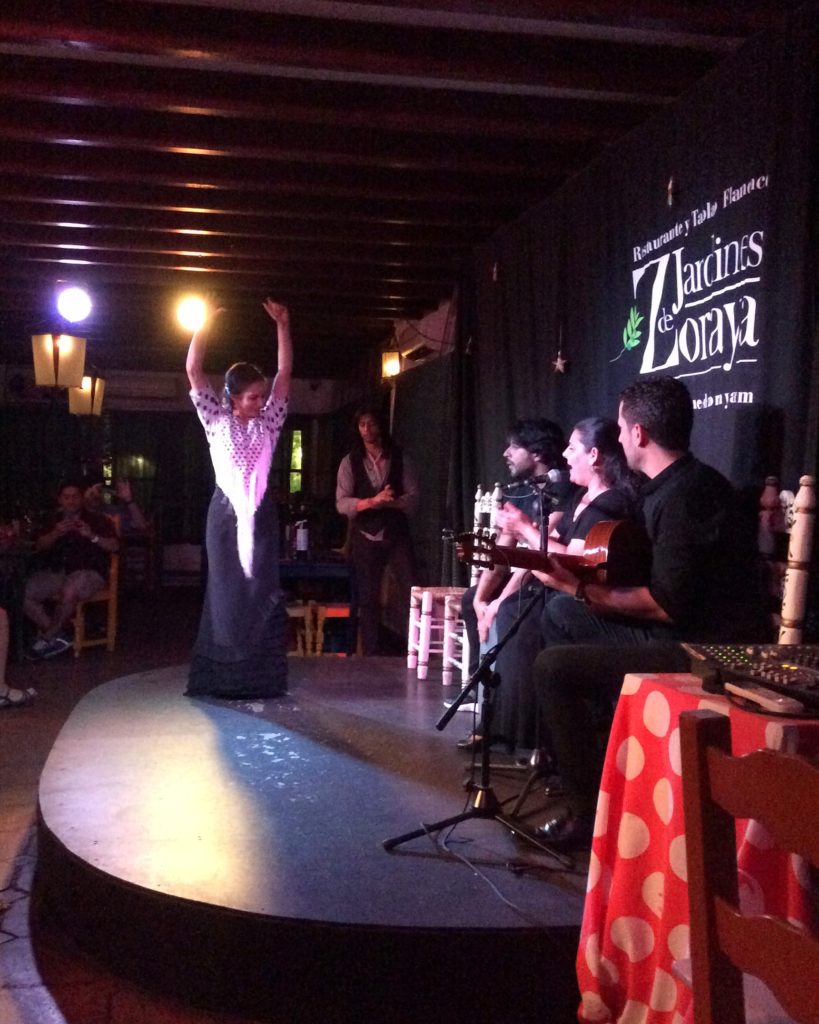 For the serious flamenco aficionado looking for high quality artistry by some of the most respected performers in the flamenco world, a show at Casa del Arte Flamenco is a must see.  This venue is unusual in that there are no drinks or food, and very minimal atmosphere. It’s all about the music and dance, and nothing else. You won’t be disappointed  if you’re looking to experience world class flamenco. 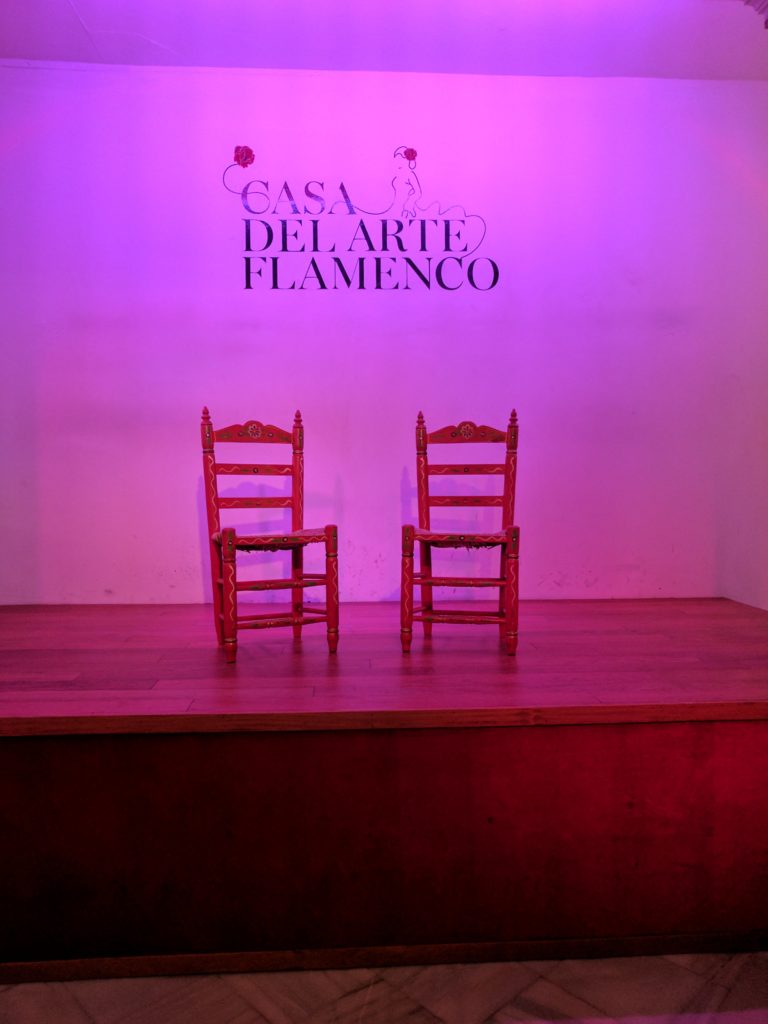 If you are a little more adventurous and are lucky enough to be in Granada (or anywhere in Andalucía) on one of the evenings that a peña is opening its doors to the public, take advantage of the opportunity. A peña is essentially a private not-for-profit flamenco club which exists to nurture the art form, funded primarily by memberships, but also in part by shows. Members have automatic free entrance to the shows and they’re sometimes open to the public, but usually at a much lower cost than at tablaos. (In Jerez, the peña shows are free to the public as well.)

The main goals of a peña are to give local flamenco aficionados a place to enjoy the art form and to provide artists with an opportunity to share their art. They are also a place for lesser-known artists to have a chance to become known. In general, they don’t advertise, and anyone outside of the local community learns about them through word of mouth. They exist to support and keep alive flamenco, and sometimes you can see world-class well-known performers, as there is an elevated respect for peñas in the flamenco community. 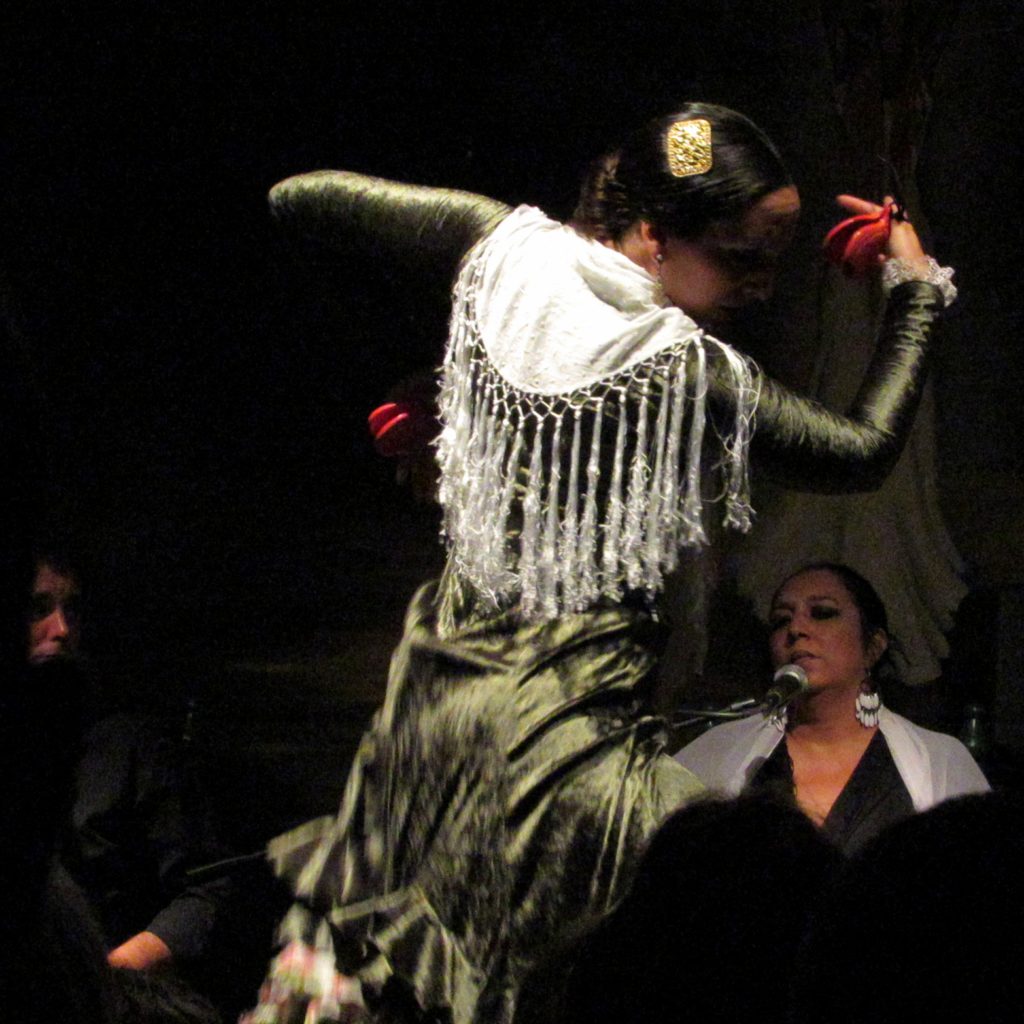 My favorite peña is Peña la Platería. It’s the oldest peña in Spain, for one.  Established in 1949, it was the first peña flamenca in Spain. But its history actually goes back further, as its embryo can be found in a group of flamenco aficionados specifically interested in cante jondo, “deep song,” who met informally near the Alhambra. The  original members in the early 20th century included among many other artists and intellectuals,  the composer Manuel de Falla and the poet and playwright Federico García Lorca.

This group of aficionados also organized the first “Concurso de Cante Jondo” in 1922 in the Patio de los Aljibes at the Alhambra. Peña la Platería organizes all kinds of events for its members and for flamenco artists, but on Thursday nights; they open their doors to the public who are treated to a very high quality show for only 10 euros, which also includes a glass of sangría. If you go early enough, which I highly recommend, you can also enjoy some great food and drinks at the restaurant/bar attached to it, or on the patio with a beautiful night view of the Alhambra. 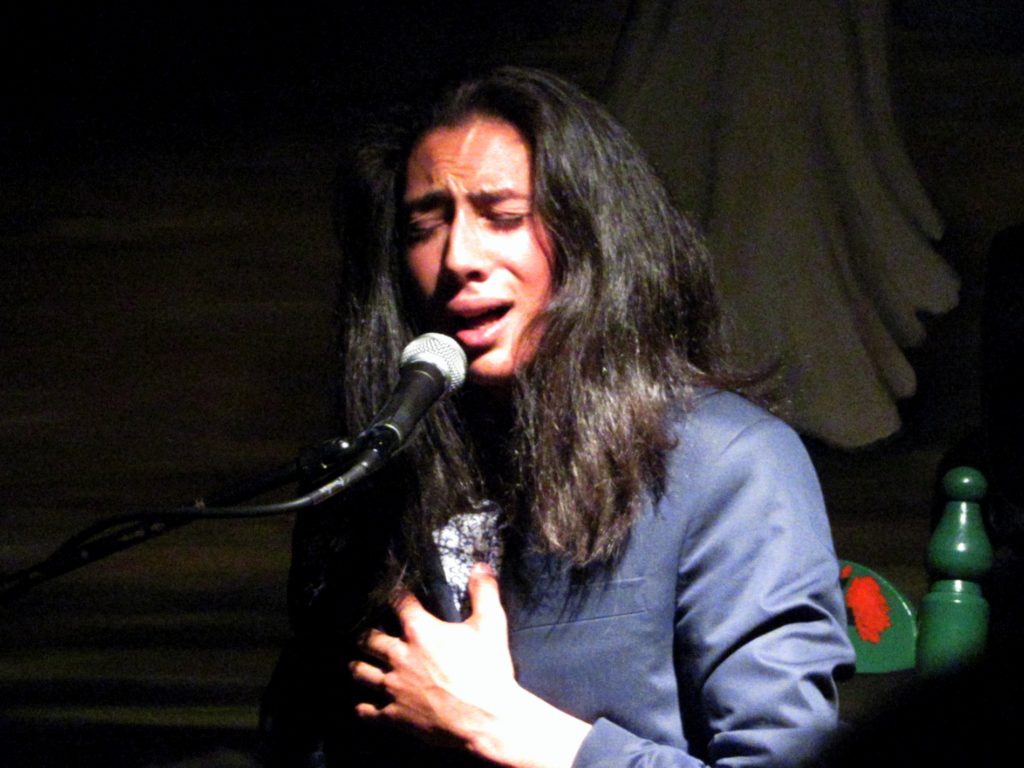 There’s a flamenco spot in Granada that I haven’t yet made it to, but I’ve heard about, that will appeal to those who enjoy experimental modern art. I hope to see a show there someday. It’s a private artists association called Taller de Arte Vimaambi, dedicated to contemporary arts of all kinds: fine arts, music, dance and film.  Shows are only open to members, but membership is free.  On Friday and Saturday nights the shows are flamenco shows.

Summer is a great time to experience flamenco in Granada. There are a couple festivals that stand out. The Festival Internacional de Música y Danza is a festival of music and dance which isn’t exclusively a flamenco festival, but does include several world class flamenco shows every year.

Another is Lorca y Granada en los Jardines del Generalife. This festival produces a different show each summer created to commemorate Federico García Lorca, one of Granada’s most beloved and celebrated sons, and his special relationship to flamenco and the gipsy community.  The show takes place in the astoundingly beautiful setting of the Jardines del Generalife, one of the gardens that forms part of the Alhambra complex.  There are also other festivals throughout the year in Granada, so it’s worth an internet search if you head to Granada at other times of the year. 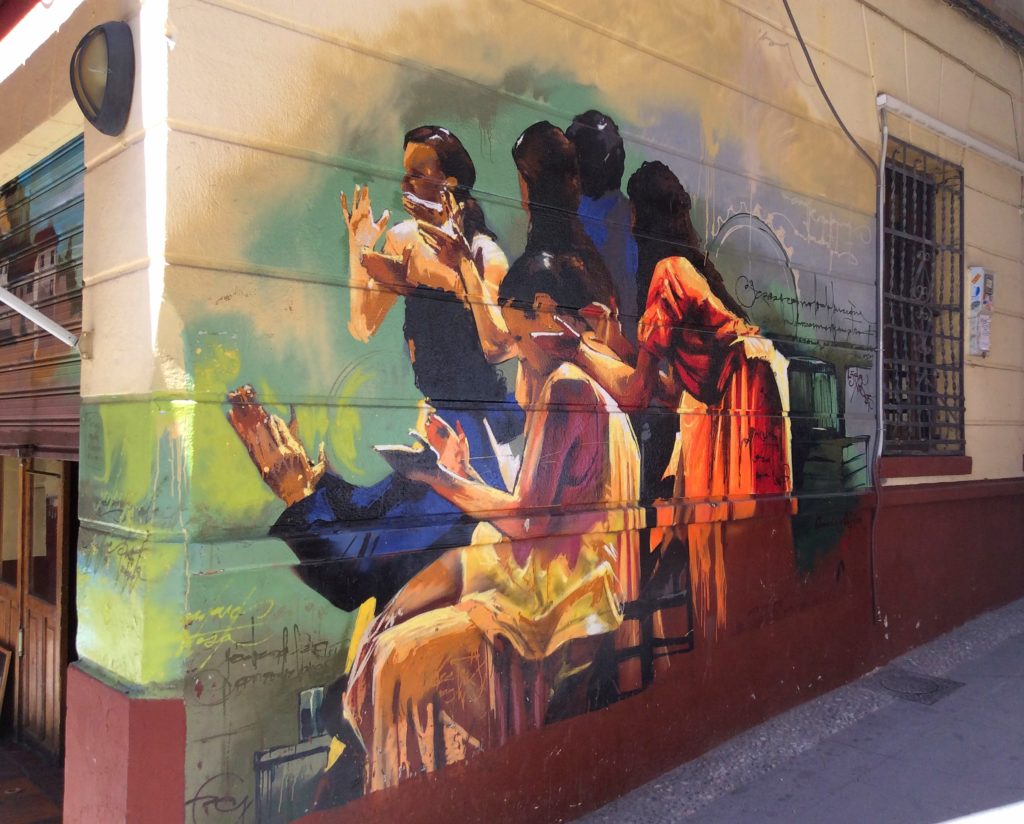 Where to Learn Flamenco

If you’re interested in learning flamenco in Granada, I would recommend getting some experience at home first. Once you’ve mastered some fundamentals there are several options to really immerse yourself. Escuela Carmen de las Cuevas is probably the most well-known all-around flamenco learning institution in Granada. The school is located in the magical Albaicín district, so you can’t help but be inspired.

They offer beginning through advanced classes in flamenco dance, singing and guitar, as well as Spanish language immersion classes. It’s an ideal choice if you don’t speak Spanish and want to immerse yourself not only in the art form, but also learn the language. They’re certified by the Instituto de Cervantes as a language instruction center, which gives them an added seal of approval.

The Lucía Guarnido Escuela de Flamenco y Danza is another flamenco school, recommended by a well-known flamenco dancer whom I respect deeply. I wasn’t able to make it work with my class schedule while I was in Granada, but I hope to someday.  They also offer dance, guitar and singing.

Finally, I can recommend Escuela de Baile Marichú. The school is closed for much of the summer for vacation, but the owner and head teacher Marichú, was willing to give me private lessons two of the summers I was in Granada. She was generous with her energy and time and very warm and friendly.

I highly recommend a visit to the Museo de las Cuevas. Although not specifically a flamenco museum, it’s a beautiful exploration of the way that Granada’s Gitano population used to live in the caves of the Sacromonte, including the importance of flamenco in their culture.

Additionally, in the summer there are weekly events in the courtyard of the museum, many of which are flamenco shows. 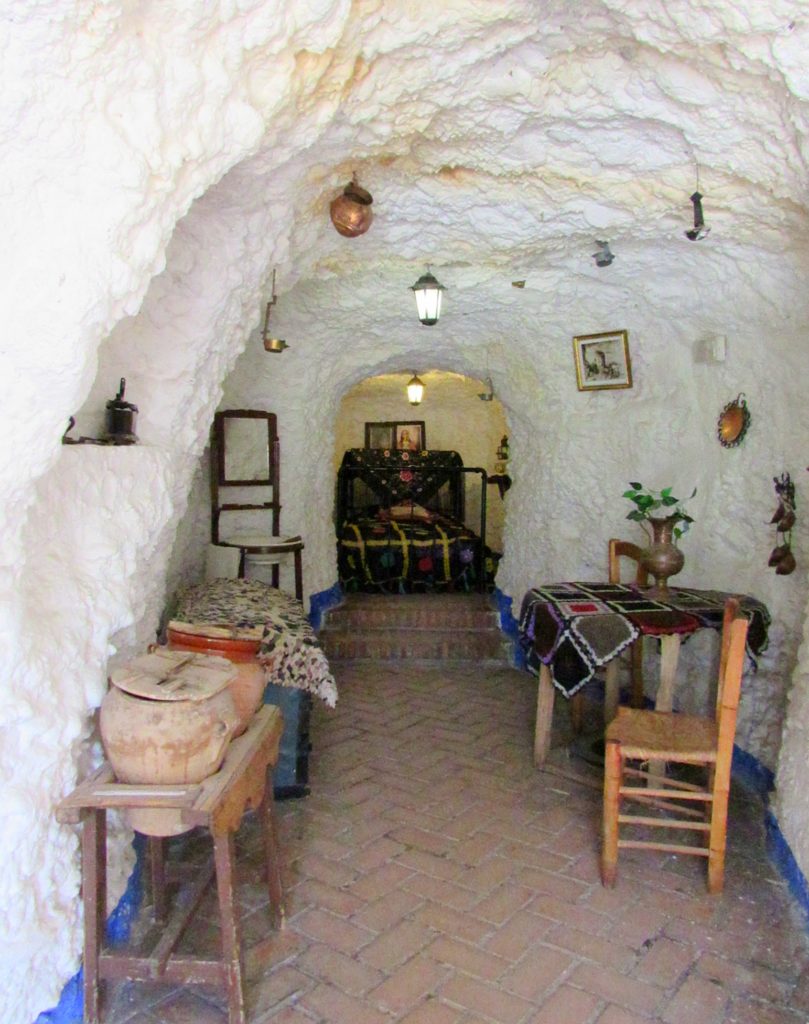 If you’re lucky to find it open on your visit to the Sacromonte, you should go into the cave of El Curro del Albaicín. El Curro is the living memory of the Sacromonte. A celebrated flamenco singer, poet and writer, he continues to live part time in his family’s cave, where he grew up, and maintains it as a sort of private museum. If you’re lucky to find him there, he will warmly welcome you in and share with you a few stories of the legendary artists of the Sacromonte, as well as photos of his many distinguished visitors, including Clinton, the Obamas, the King of Spain and Kofi Annan, among others.

He also has copies of his book of poetry and his book about the flamenco history of the Sacromonte for sale. 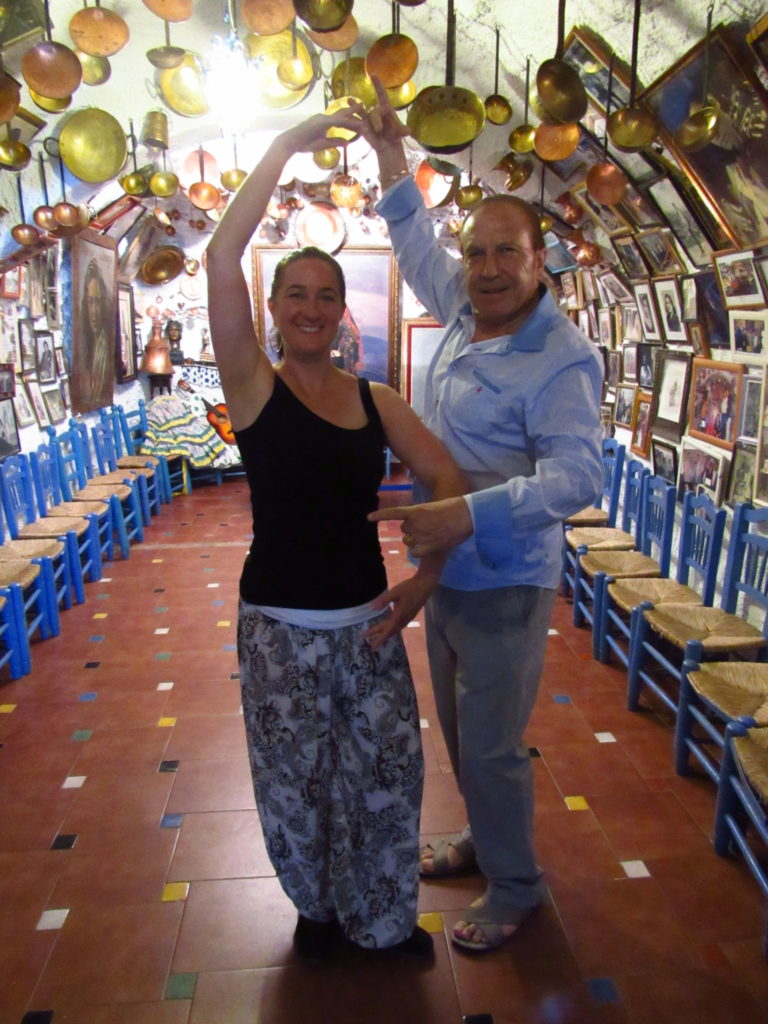 Enjoy Your Own Flamenco Experience in Granada

Whether you’re new to flamenco or a long time aficionado looking for a deeper experience, there’s a flamenco paradise waiting for you in Granada.

In my experience, the more you show yourself to be open and enthusiastic about the flamenco experience in Granada, the more people will tell you about their own favorite spots. Happy flamenco travels! 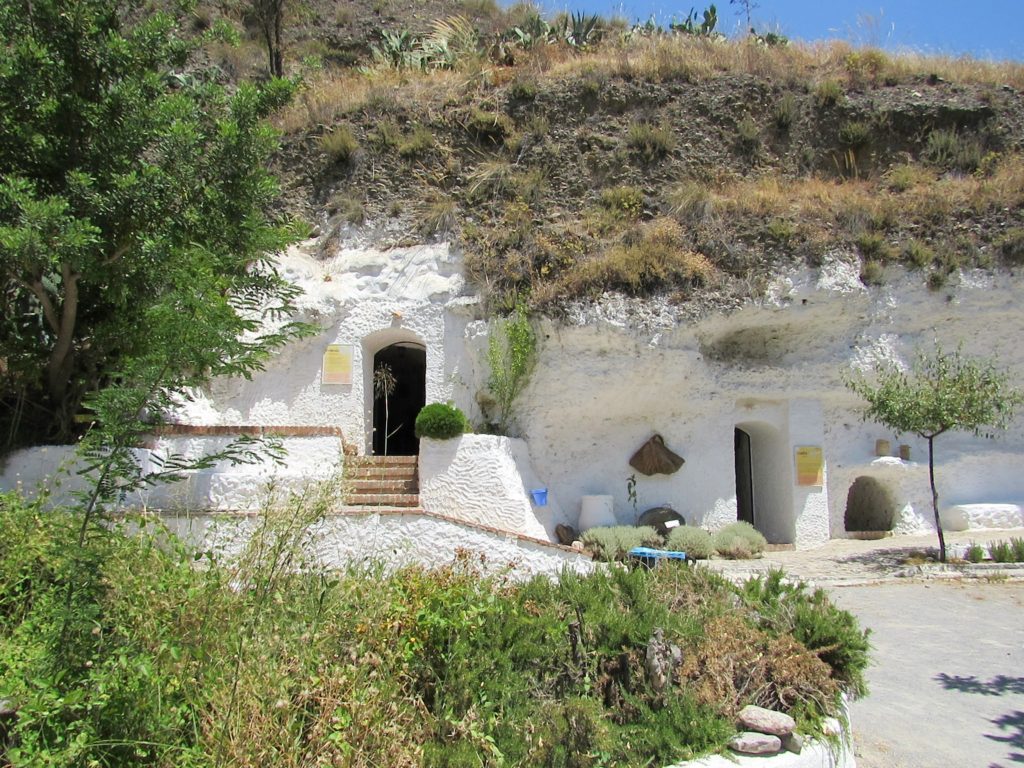 Julie Pacheco-Toye is a high school Spanish teacher and a student, dancer and performer of flamenco. She's also an amateur photographer studying the art of travel photography. She loves to travel and to capture all the beauty she finds in the world when she travels. See more of her work at JuliePachecoToye.pixels.com and Abriendo Caminos.

A Visit to the Famous Tsukiji Fish Market in Tokyo