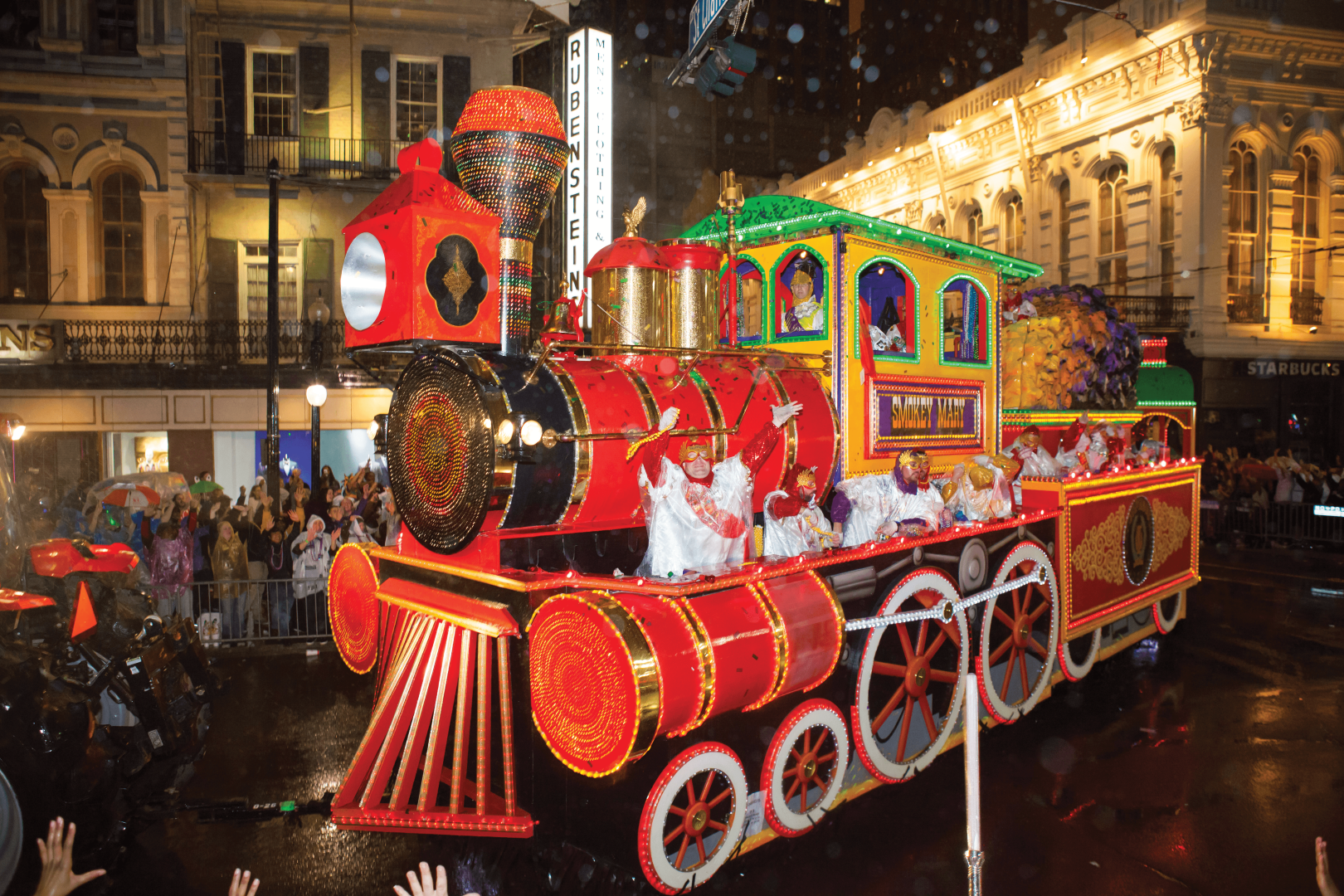 It’s Mardi Gras and it’s parade and party time! Costumed bands troop through the French Quarter and their music fills the air. Masked men throw trinkets, beads, doubloons, and beanbags to the animated crowd. International celebrities add to the excitement, appearing as carnival kings and queens. Torch carriers spin and gyrate flaming displays. Gliding hulks covered with canvas move along carrying a world of make-believe fantasies. And there are the Mardi Gras floats!

There are Mardi Gras floats that feature oversized figures of NFL players, 14-foot tall three-dimensional Marilyn Monroes and huge supermen. Massive clowns and enormous gorillas drift by on these dazzling, brilliantly colored, glittering floats. The moving Mardi Gras floats are eye-catching, animated, well-meant extravagance. The crowd surges and cheers as gifts and toys are distributed, there’s noise and activity all around and happy people everywhere: the excitement is contagious. 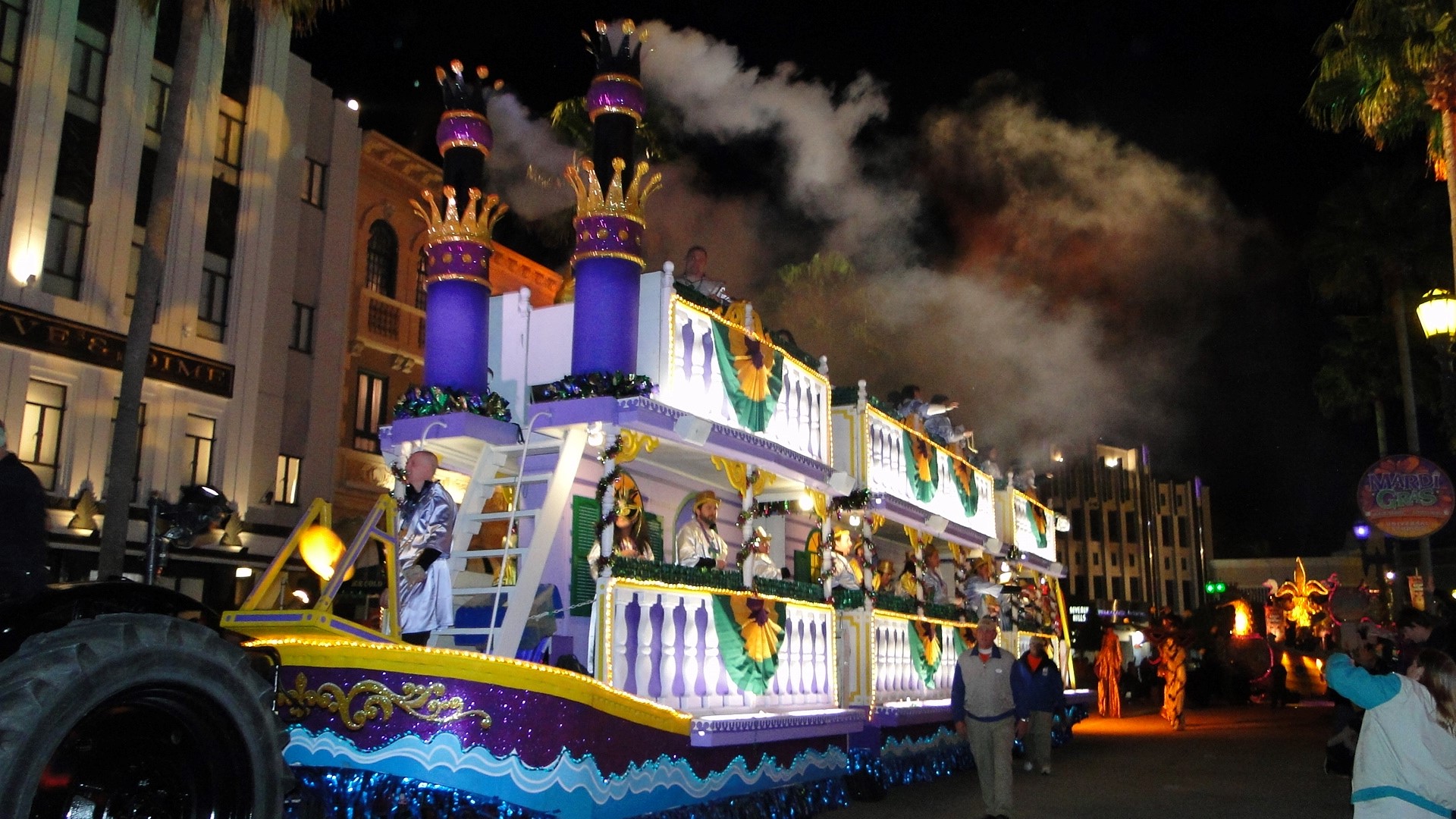 It just wouldn’t be Mardi Gras without the parades and parade floats! (Photo courtesy Kern Studios.)

In December, while many of us are bustling around getting ready for the holiday season, the people of New Orleans, Louisiana have more on their mind. On January 6th, their whopping celebration that draws worldwide attention begins. Although the biggest spectacles and events take place this 2018 year from February 9th through February 13th, Mardi Gras is more than just a series of parades over two weeks. It’s the most important event of the year: a widespread social event for the entire city. Carnival is a season of debutante “coming out” balls, swanky aristocratic private events, and parties galore.

Annually, the Carnival season starts on January 6th, also known as The Feast of The Epiphany, Three Kings, or Twelfth Night; a date with significant meaning in many Western European religions. At midnight, Twelfth Night Revelers, New Orleans’ second-oldest krewe, will hold a masked ball to signal the beginning of the Carnival season.

Carnival celebration always begins on the Twelfth Night and runs through midnight on Shrove or Fat Tuesday. Fat Tuesday precedes Ash Wednesday and is the last day to feast before Lent starts. Easter can fall on any Sunday from March 23 to April 25, with the exact date to coincide with the first Sunday after the full moon following a spring equinox. Get out your calendar. If you can figure all that out on your own, good for you. You have more fingers and toes than I do.

This year there’s only 34 days of revelry, a short Mardi Gras season, but some years it can extend to almost two months. That’s a whole lot of partying going on.

With such a short season, there’s a lot to finish in New Orleans before parade time. So, let’s focus on those awesome Mardi Gras floats, and all that makes Mardi Gras so fun, so famous, and so fabulous.

Who Owns The Mardi Gras Floats?

Some interesting things about Carnival and Mardi Gras: groups called a krewe privately organize many parades and balls. Some krewes are philanthropic or charitable, some are professional organizations, special groups organize themselves, and some krewes just want to have fun. Most of the larger parades take place on Canal and St. Charles Streets. The parades do not take place simultaneously: 70 separate parades occur over four parishes in about 2 weeks. This year, 2018, Krewe du Vieaux will hold their parade on January 27th. They’re funny, satirical, shocking, and a lot naughty, but they have some of the best brass and jazz bands in the Carnival.

Krewes take their names to represent different meanings and symbols. The Orpheus parade takes place at night and their flower representation is from their Greek god namesake. Bacchus was the god of wine, so their floats depicted a grape theme. Rex is the acknowledged king of the parades and established the original Mardi Gras colors: purple represents justice, green for faith and gold signifies power.

Of particular interest are the floats themselves. Every float represents months of work: meticulous planning, painstaking construction, and finishing to ensure each is a masterpiece in itself. The planning begins on the day after last year’s Mardi Gras parade.

Each krewe privately owns, operates, and selects its own theme for the following year’s floats. In Orleans Parish, a krewe must have at least 14, but may have up to 28 floats along with dancers and at least 7 marching bands, clowns, and motorcycle squads making a rousing spectacle. A single parade may involve more than 3,000 people. 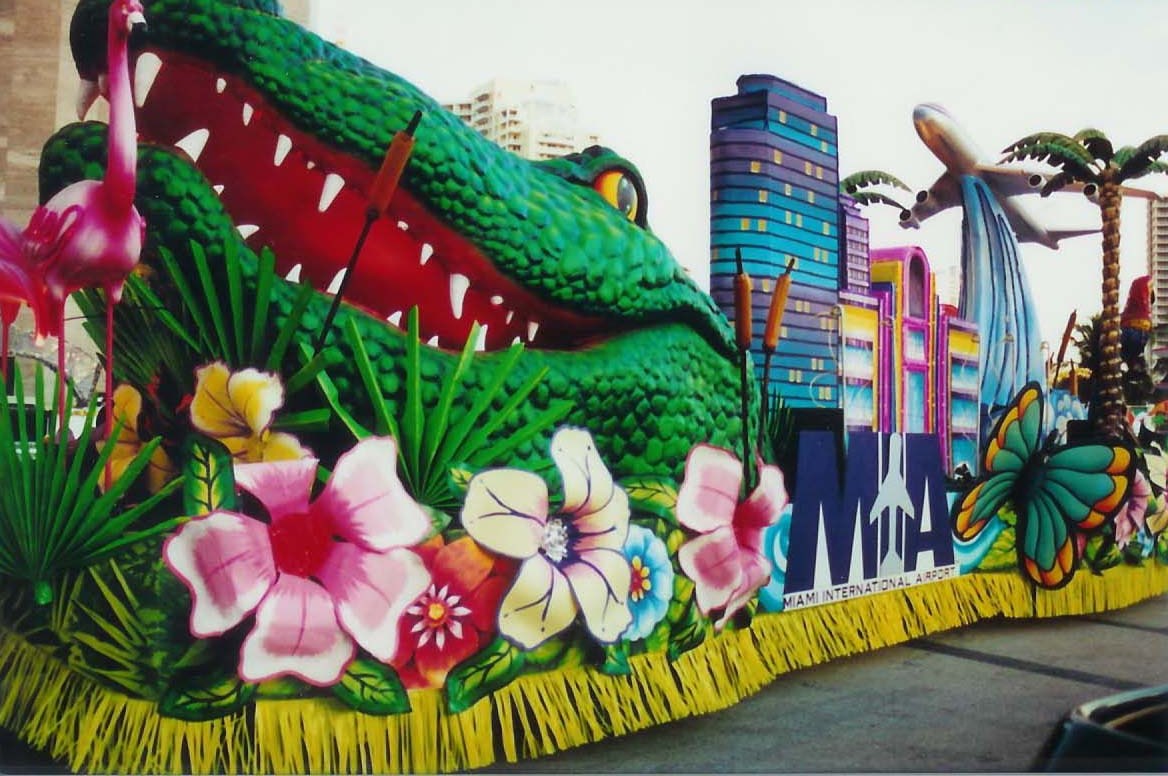 How Much Do Floats Cost?

Most floats are pulled by tractors, although a few are still pulled by mules. The skeleton structure for each float can cost as much as $70,000 to $100,000 to purchase, so krewes with 28 floats have a significant investment. A 50-foot float may weigh 20 to 21 tons and is basically a wooden frame draped with canvas. The wooden frame is not painted: all decoration is applied to the canvas shroud. Solid rubber tires are used on the floats to ensure no flat tires along the parade route. A float this size may cost between $20,000 to $30,000 annually to redecorate.

Super krewes like Rex, Orpheus, and Endymion have the biggest and best floats with dazzling special effects and generous crowd throws. Approximately 54 people will ride a float this size, strapped in for their protection. 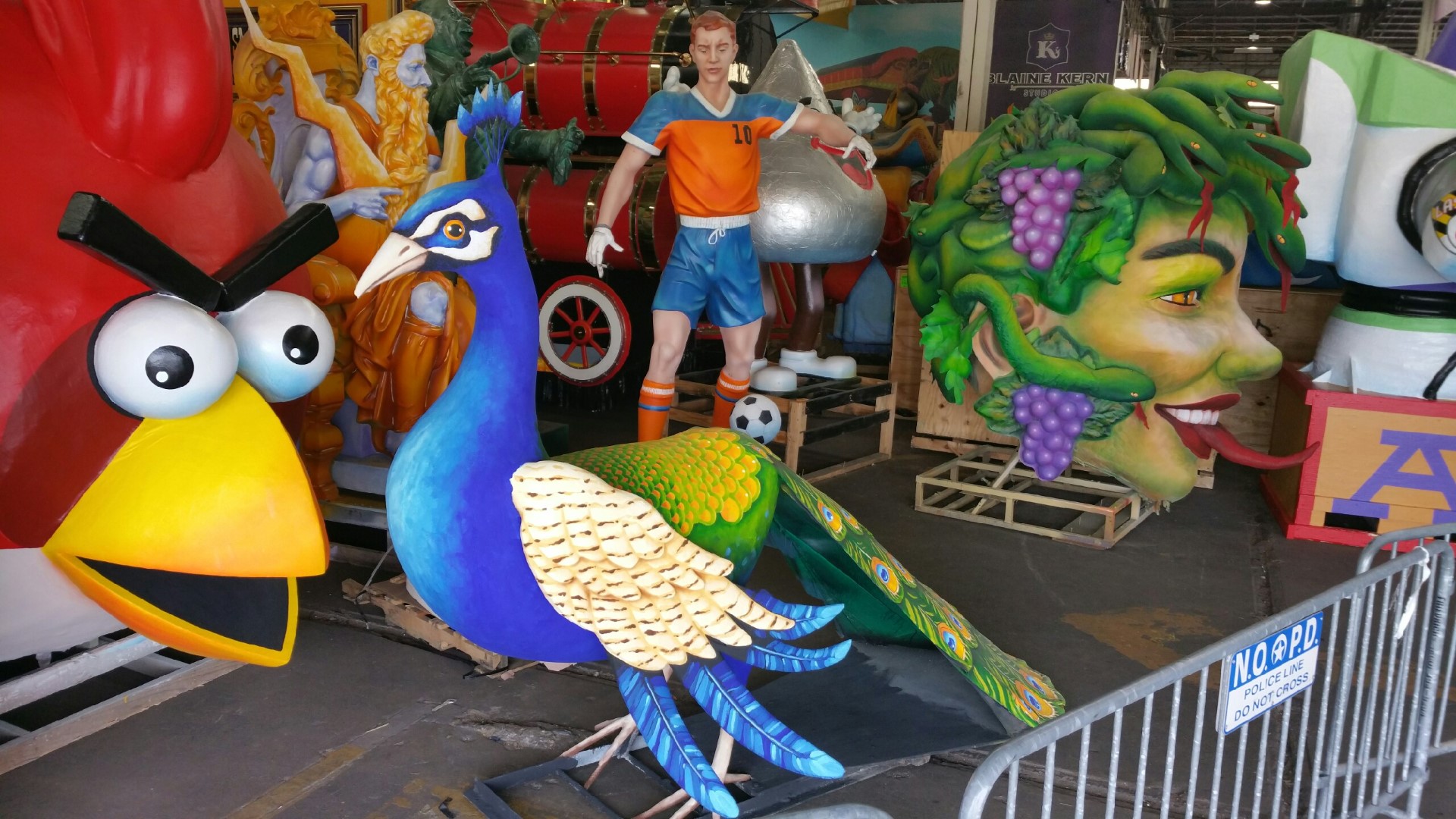 Kern Studios: Where The Magic Happens

In September, I was fortunate enough to visit Kern Studios. I watched a short film explaining the company history going all the way back to their first floats in 1932.  A studio representative explained what they do and it truly is a lot more than just Mardi Gras floats. Kern Studios is a specialty fabrication company for outdoor advertising, unique objects of art, and themed environments for sports stadiums, museums, and amusement parks.

After a taste of yummy King Cake, the annual Mardi Gras specialty, a tour guide led us through part of the 250,000 square foot Kern Studios warehouse overlooking the Mississippi River to see the creative process taking place and view imagination in action.

There, scores of sculptors, painters, and artisans create whimsical and imaginative characters, creatures, props, and floats that will beguile next year’s Mardi Gras revelers. In September, many of last year’s floats were still assembled, so I had the chance to see the old along with the new in progress.

In each artist’s private area, work is clearly taking place for next year’s extravaganza. Sketches of evolving creations for next year are displayed. From design to construction of forms covered by layers of paper-mache, painted and decorated, these fancies of extraordinary creativeness are turned into reality. 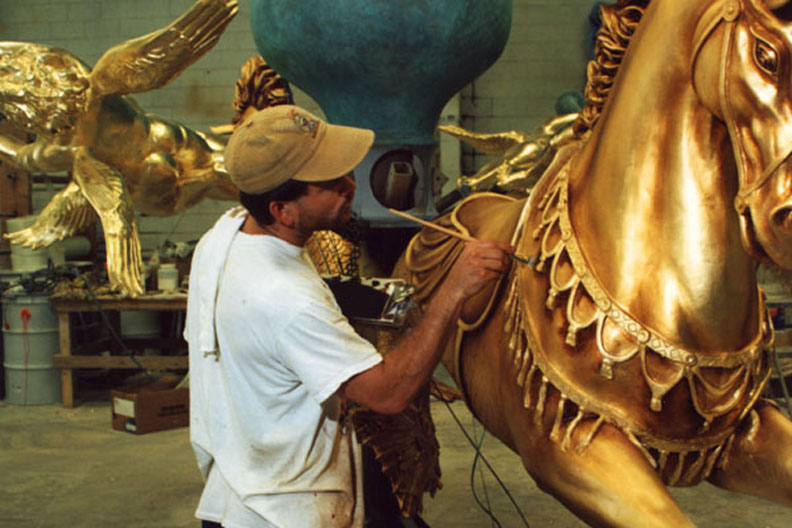 It Starts With a Pencil Sketch

From pencil sketch to ink drawing and finally a color rendering, designs for the Mardi Gras floats are finalized. To create the final form, each prop is molded out of clay. The clay form is sliced into thin layers. Each layer is projected, traced, and cut onto a large sheet of 3’ thick Styrofoam to create a full-sized piece of the overall prop. These layers of Styrofoam are then bonded together to make the basic shape of the prop. Artists carve, shape, smooth, and sand to give the sculpture its final form. Finally, the prop is covered with layers of brown  paper-mache and painted white.

The real magic takes place as artists airbrush make-up and features onto each prop. Exceptional skill is required to apply the subtle tints and shades that animate each character as costumes, sequins and feathers are applied.

Touring the studios, I strolled past mammoth unicorns awaiting installation and colossal heads, hands, figures that dwarfed me.  There was a Trojan head and a bust 12-feet tall in full battle gear, oversized faces with soft and delicately applied makeup. A grinning elf peeked out at me from behind one of last year’s floats.

A combination of the overwhelming size of the props, the abundant and vivid colors, and the sheer mass of everything in the studio impressed me. This was walking into a land of giants. Mardi Gras World is a family friendly location and be sure to take your camera. The kids will love posing with all those gigantic Tinkerbells and Peter Pans.

Any trip to New Orleans isn’t complete without a visit to this play-land for oversized imaginations. Be sure to stop in. It’s a tour you’ll never forget. 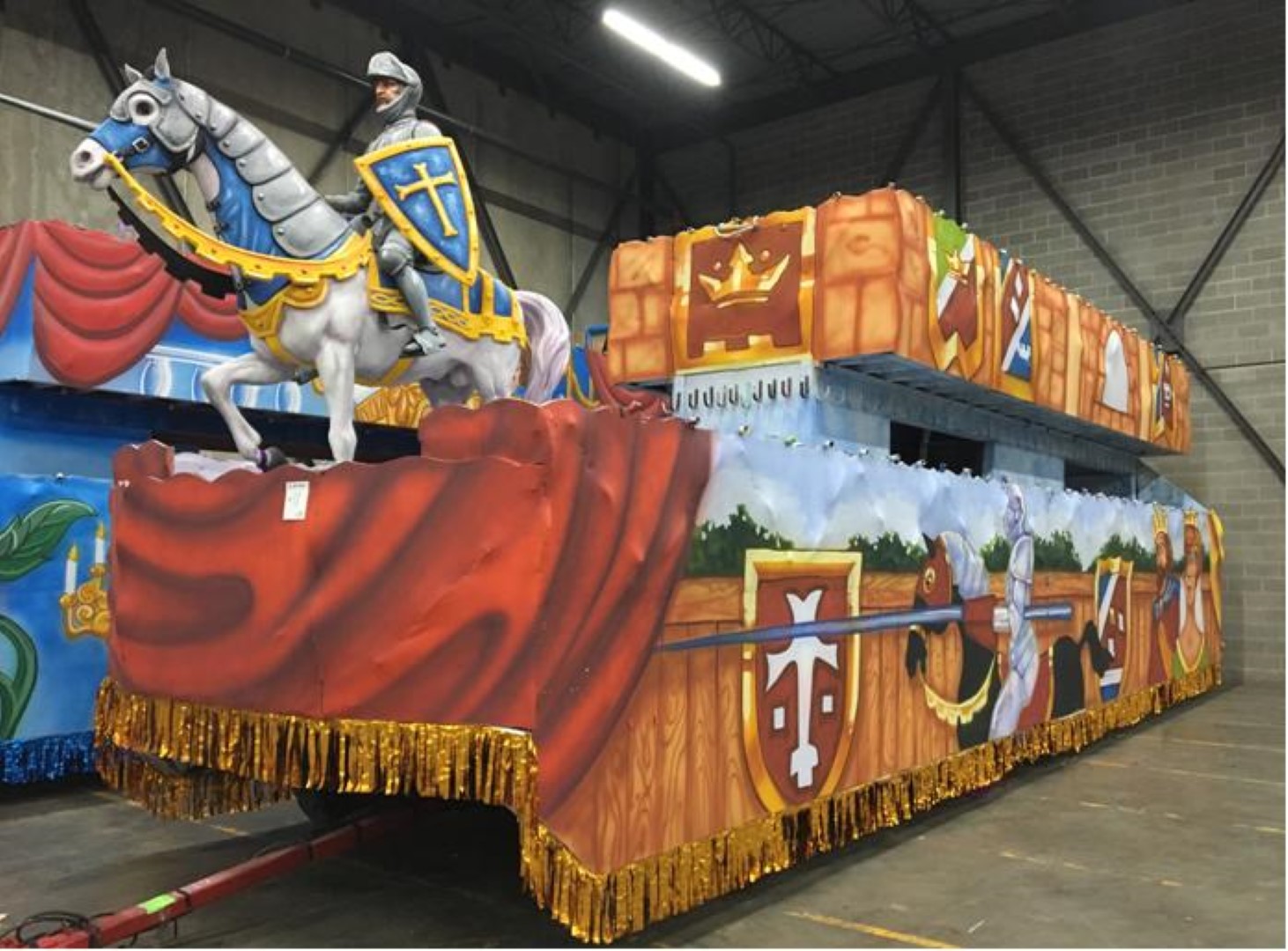 I left behind a corporate job and now life’s a lot more fun. I was bitten by the travel bug at 2-years old when my family moved to Europe. Today, I’m a published travel writer with articles in Parachute, TravelMedia, Pink Pangea and Travel Post Monthly. It’s the best job I’ve ever had. I’ve visited most of Europe, 47 of the 50 United States, Canada, the Caribbean, Mexico, and South America. Next on my agenda: destination unknown? And, Portugal, still haven’t been there yet. Right now, I spend part of the year in Bogota, Colombia. I’m a nomad and travel on my own, though I don’t speak the language or know anyone at my destination. I know I’ll always have an abundance of new friends by the time I pack my bags again. My address book is now filled with names, addresses and phone numbers from places I have been. A member of Travel Media, The Association of Travel Writers, The International Travel Writers and Photographers Alliance (ITWPA), Travel Massive and Women Traveling South America Writers Group. Inquisitive, curious, and adventurous, I’m an explorer at heart. That will be me: asking questions and wandering purposefully.

Living With a Family of Sami Reindeer Herders