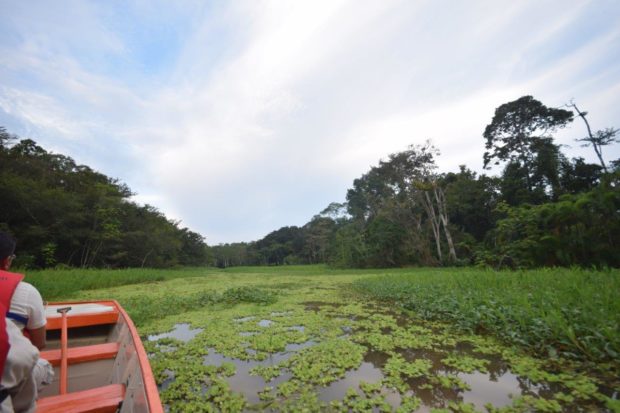 Peru’s Amazon Rainforest: About the Water

Visiting the Amazon rainforest evokes the chance to see a wide and mighty river and narrow slow-moving waterways with hanging Tarzan vines and jungle flora. Flora like exotic houseplants on steroids. We picture a host of exotic birds, fish, insects, amphibians and mammals.  Throughout our five days in Peru’s Amazon rainforest, we find that, and more.

We spend much of our time on the water in various water craft, and hike along waterways and trails. We view the jungle canopy via a series of suspension bridges that reach as high as 122 feet in the air. I fish for piranha and dine on our catch, see pink dolphins, ibis, monkeys, a tapir, and a host of other animal life.  We enjoy six-foot wide Victoria Regina water lilies in bloom. I help press sugar cane to make rum and molasses at a distillery. We hear the sounds of the jungle at night on a night walk around a lake. We visit with residents to learn more about their lives, and meet a medical clinic run by an American doctor who has made the rainforest her home for more than 20 years. And so, so much more.

Exploring the Amazon rainforest in Peru is a memorable adventure and was a highlight on my month-long trip to Peru. Let’s take a look! 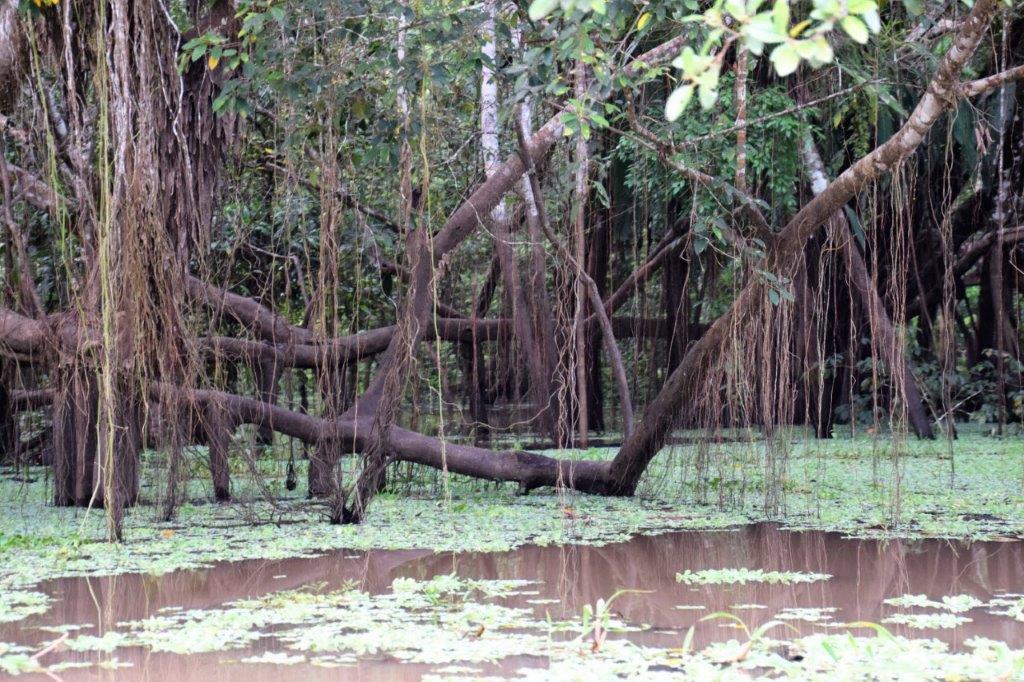 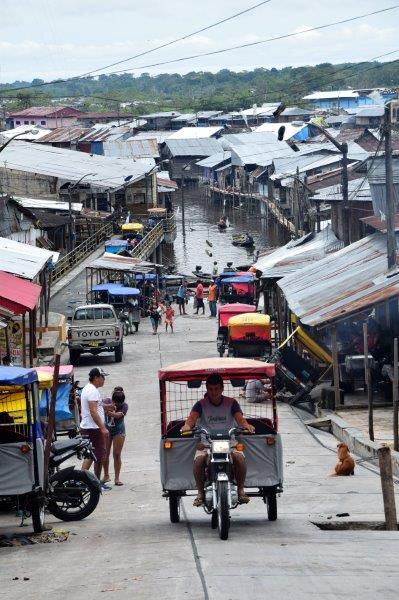 From within Peru, your exploration of Peru’s Amazon Rainforest may begin with a flight from Lima to Iquitos. The 6th largest city in Peru, Iquitos is also the world largest landlocked city. The official 2015 census says there are 437,400 people living here, but most people will tell you that there’s been a steady influx of new people arriving from small villages up and down the Amazon and the population is actually somewhere between 500,000 to 800,000. The economy is driven by oil, lumber and tourism. Think about that. A city of more than a half million people and you cannot get in or out by car or train. 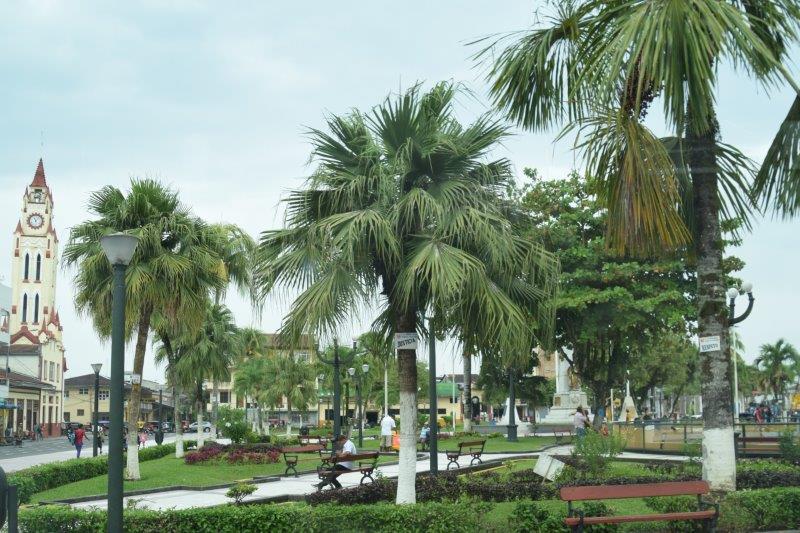 City squares are found in just about every Peruvian city.

You’ll arrive by plane or boat. It’s a two-and half-day to five day journey with a combination of bus and boat rides. (I arrived by plane, so don’t have first-hand knowledge of that experience.) So many people—add some of the 250,000 tourists a year to the mix—and all supplies arrive by plane or boat. There are few cars because cars ship in by barge and you’re not going to be able to drive far anyway. What you will see in Iquitos are a lot of motorcycles, tuk tuks, motocarros and bicycles. There are 28,000 licensed mototaxis and that’s how most people get around. Sit back, hang on and enjoy the organized chaos! 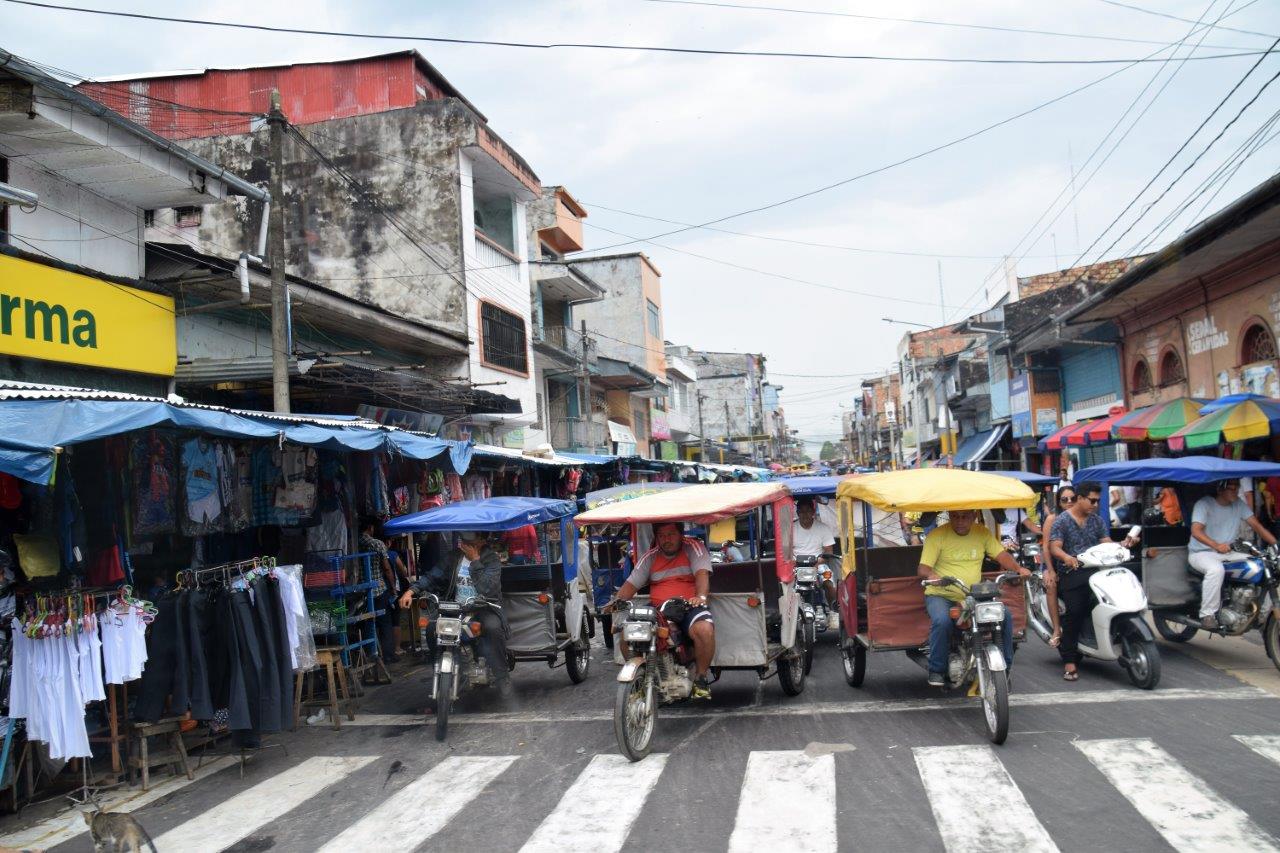 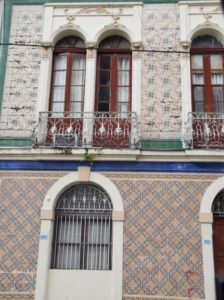 Not surprisingly, much of the life of the city takes place on the waterfront and on the river itself. And it’s also where many of the new residents live. Balsa wood houseboats rise and fall with the river’s level. Twenty-five thousand people shop at the Belen market each day.

Iquitos had long been home to Amazon tribes. Jesuit Missionaries first arrived in the 1500’s, but it wasn’t an official city until 1757. The city grew from the mid- to late-1800’s, during the short period of time when imported rubber trees created a short-lived boom.

A real curiosity, the Iron House (La Casa de Fierro), is Iquitos’ biggest tourist draw today. It was built in 1890, by Gustave Eiffel, of Eiffel Tower fame. Many of the downtown buildings were built during the city’s boom-time and some 90 of them are protected today. In many, you’ll see evidence of the original colonial tilework. 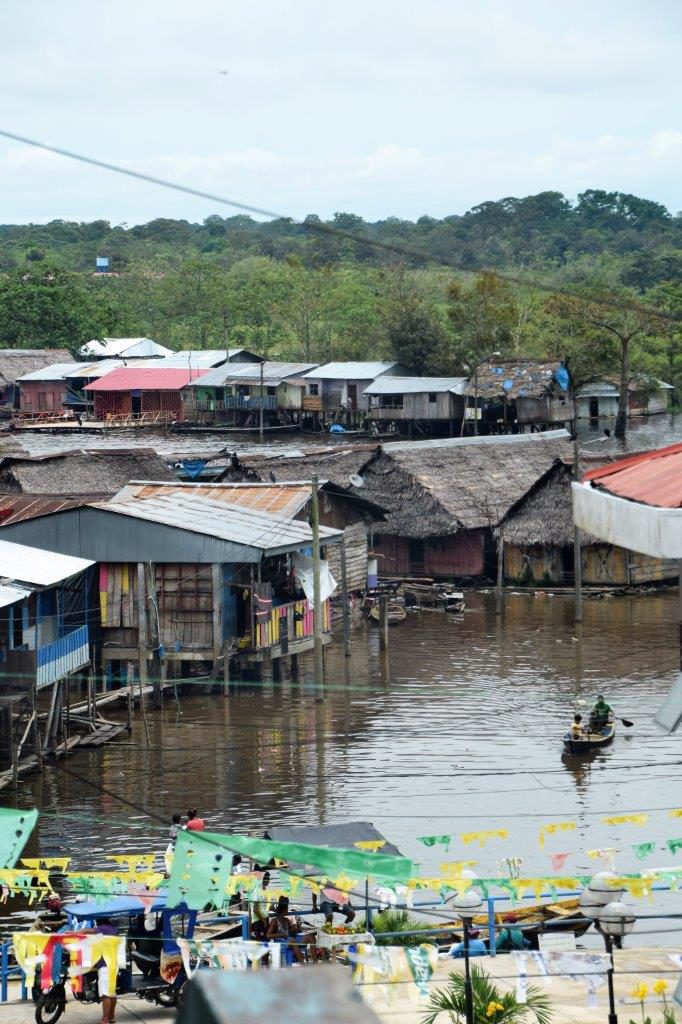 Boating to the Lodge 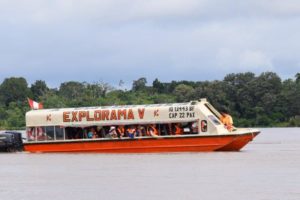 On our way to Explorama Lodge.

We catch the boat that will take us an hour and half down river to the first of the two lodges at which we’ll stay. Iquitos sits between the Amazon and the Itaya River and our boat ramp is on the Itaya. After we get started, we have about a five minute trip to the confluence of the Itaya River and the Amazon.

We immediately get a glimpse of life on the river. 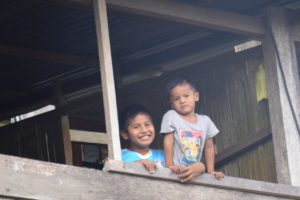 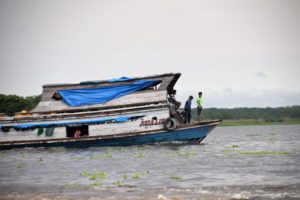 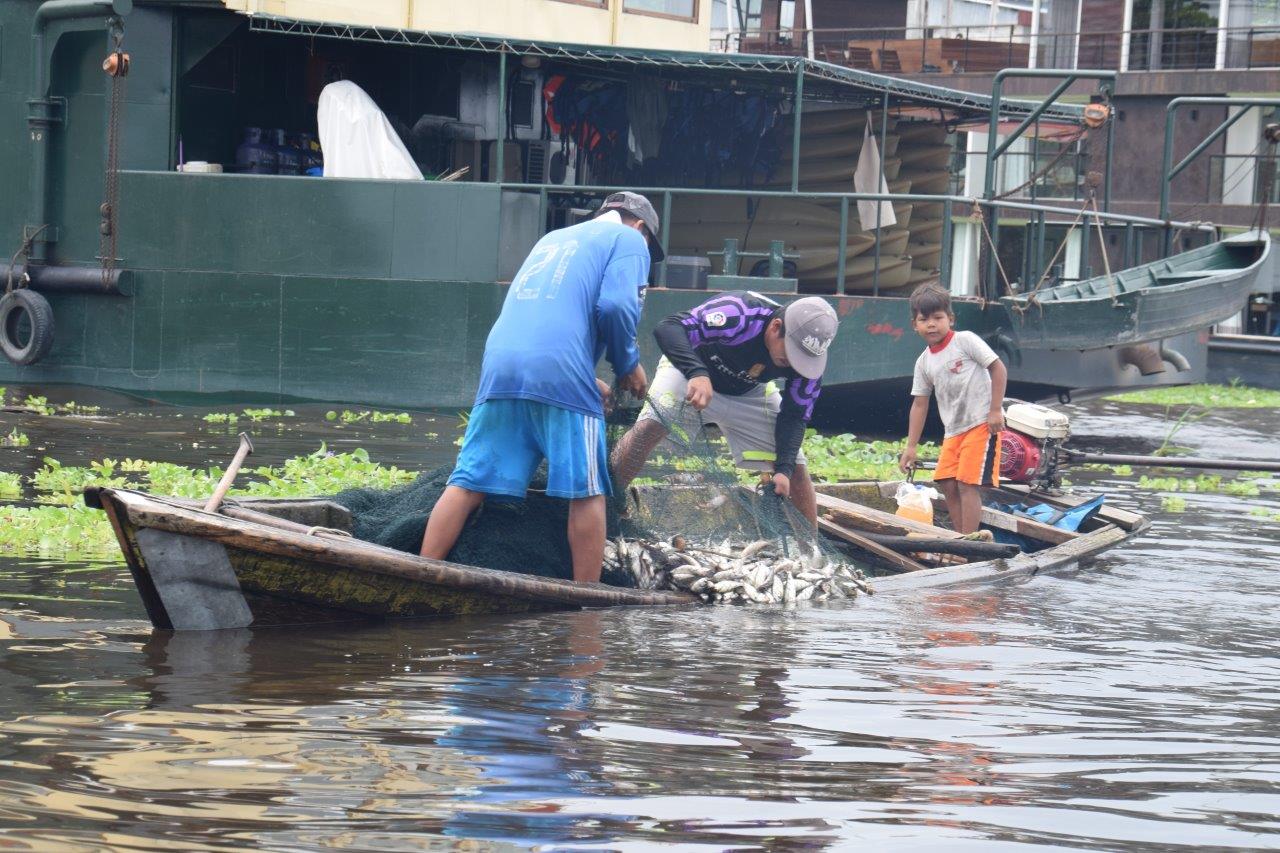 The Itaya is a black water river with an acidic pH level of 4-5, whereas the Amazon is more pH neutral at 7. The difference is visible. (I’ve seen this in a couple of other places, and it’s a wonder.) 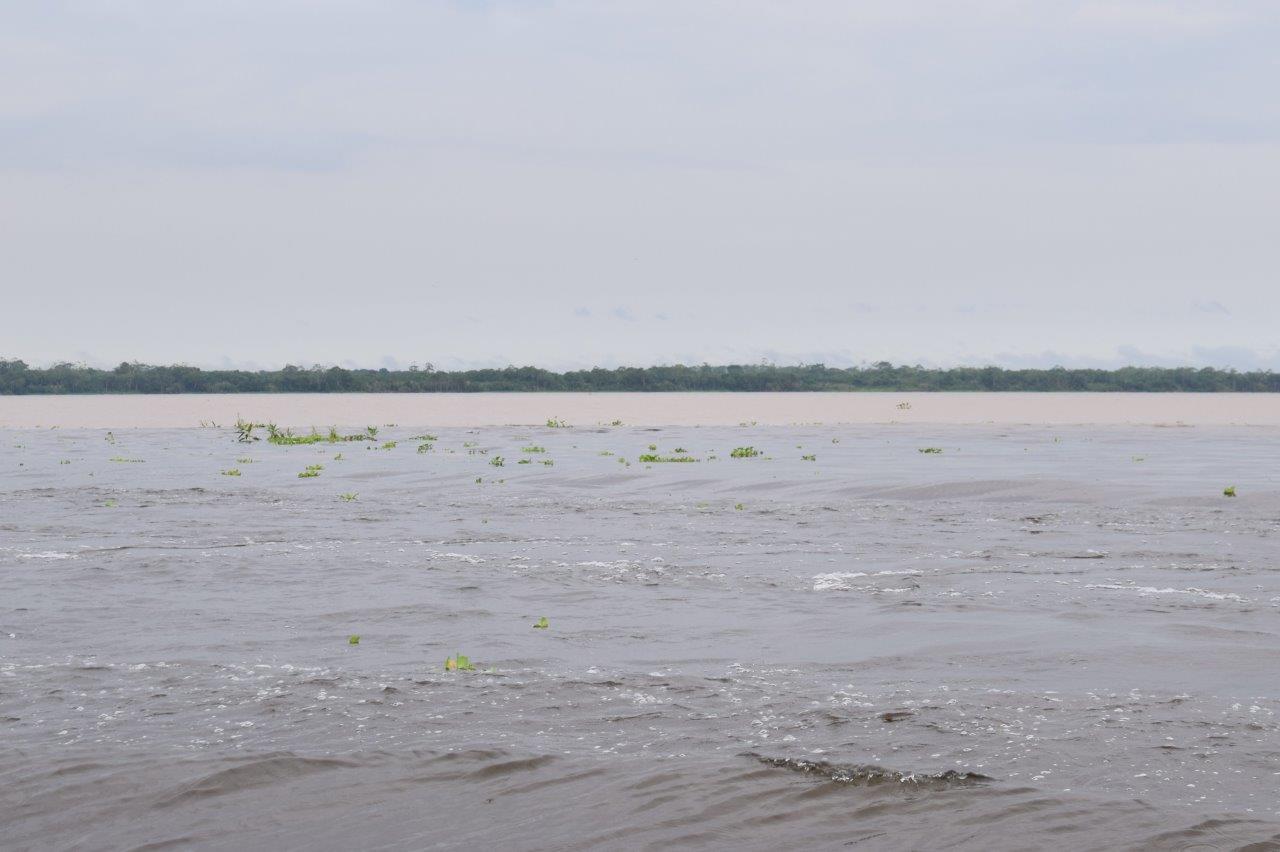 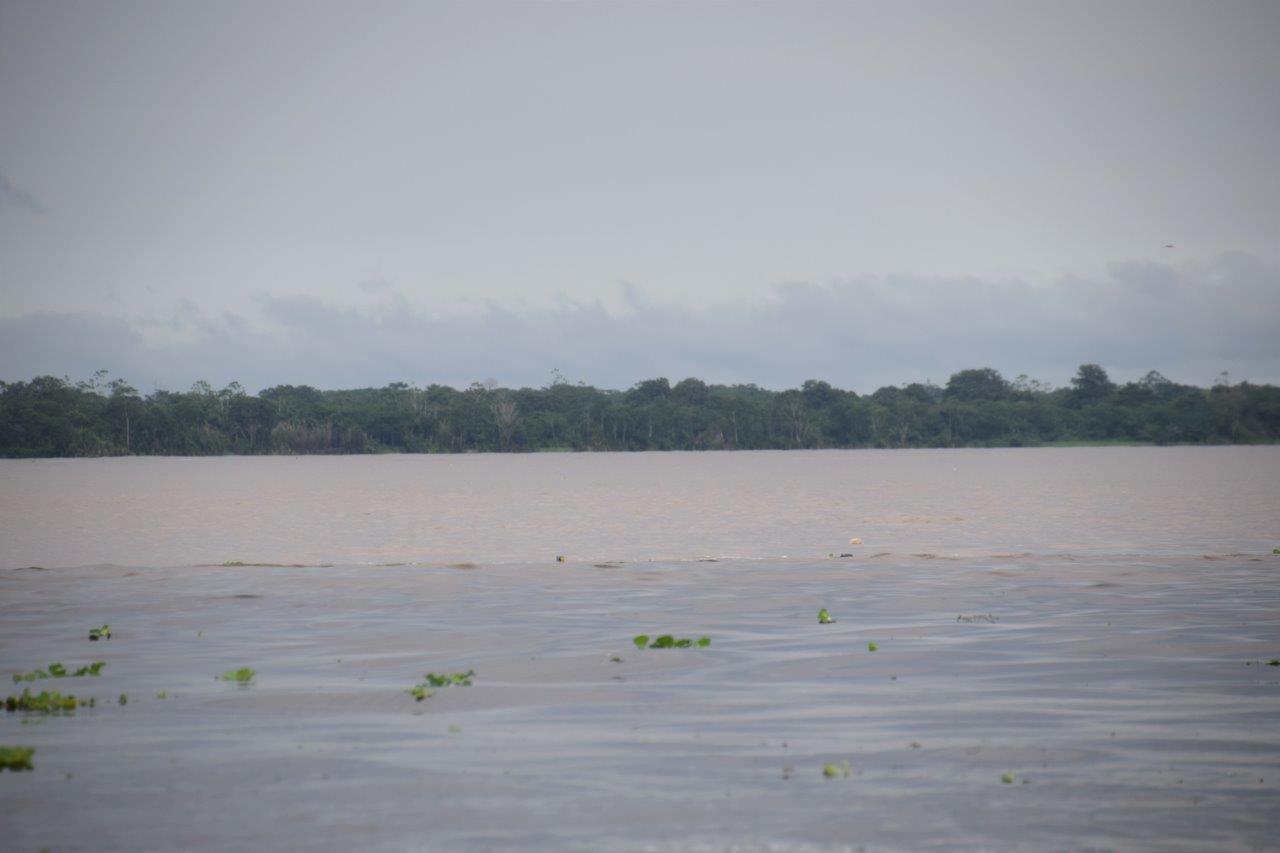 The confluence of the Itaya and Amazon rivers.

The Amazon River is by far the largest river by water discharge in the world, emptying out into the Atlantic Ocean. The river runs for some 4,000 miles, and I’m not going to take sides on whether it, or the Nile, is the longest river because the data seems to vacillate. We’re about 2,300 miles from the river’s mouth in Brazil. The width, of course, varies, but in most of the areas we are, the Amazon is between 2, 3 and 5 miles wide.

It’s an impressive sight. The sky is overcast, and the birds are out; they like those in-between conditions; not too rainy, not too sunny. All the homes and villages are on one side of the river. We’re told that that the “other” side of the river often floods and while many farm the silty land, it’s unsuitable for living. 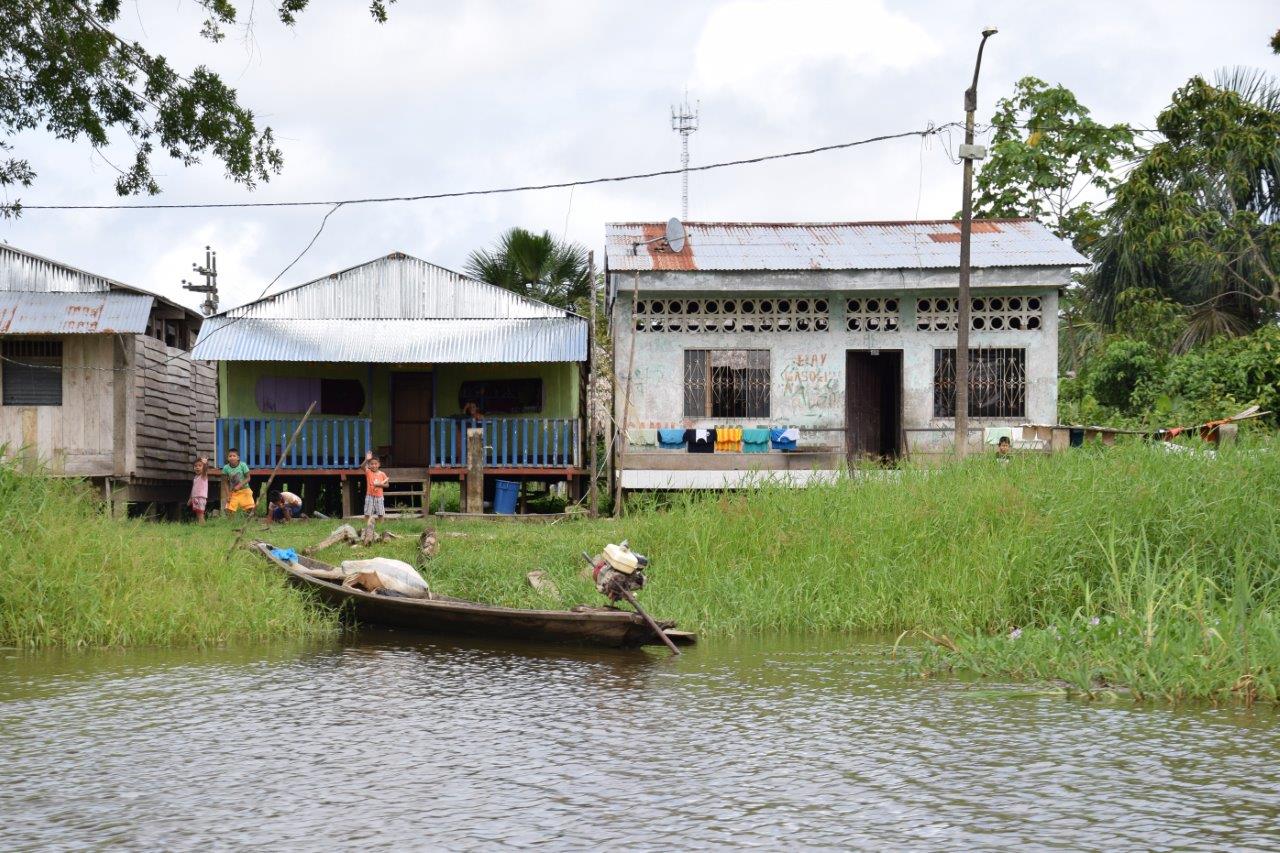 Down river, we pass the town of Indiana, which, yes, was named for the U.S. state by its founders, Indiana missionaries. About 5,000 people live in Indiana. We’ll visit Indiana later in our trip.

About 50 miles from where we started in Iquitos, we approach Explorama Lodge, near Yanamono Island. It’s the first of two Explorama properties in which we’ll stay, and first of the three we’ll visit. 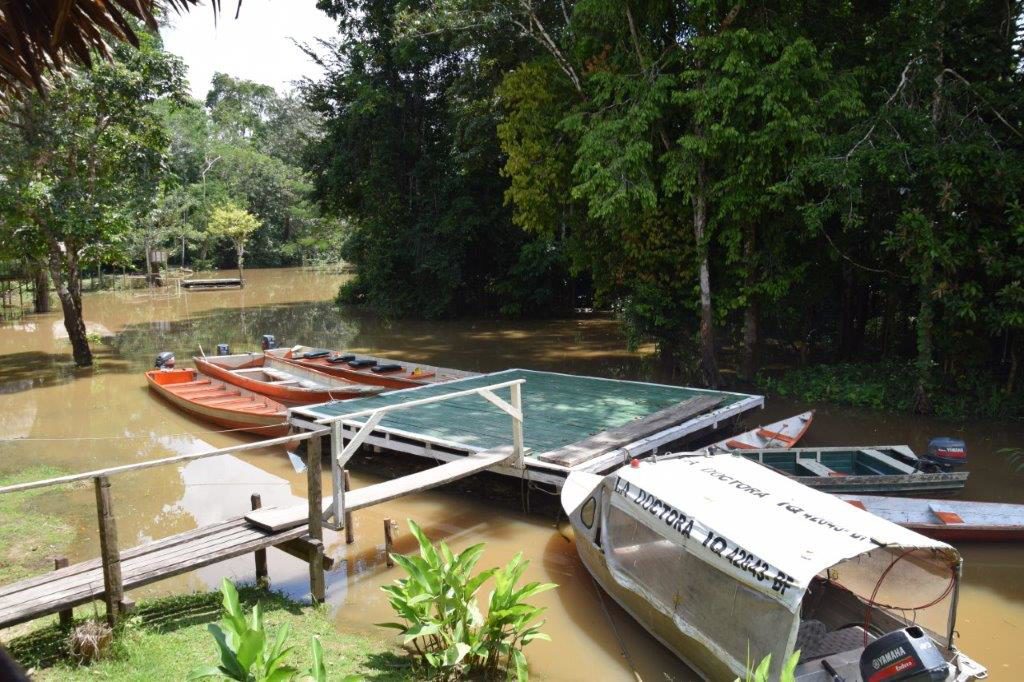 Visit to the Amazon Rainforest? You Should be On the Water

When you visit the Amazon, you should spend a lot of time on the water. Orlando, our guide, doesn’t disappoint. In addition to the boat ride out, after lunch we climb aboard a wooden boat with an outboard motor. The boat seats the 8 of us, plus Orlando and our boat captain. After dinner, we go out again, this time in two motorized canoes, also known as peki-peki boats. 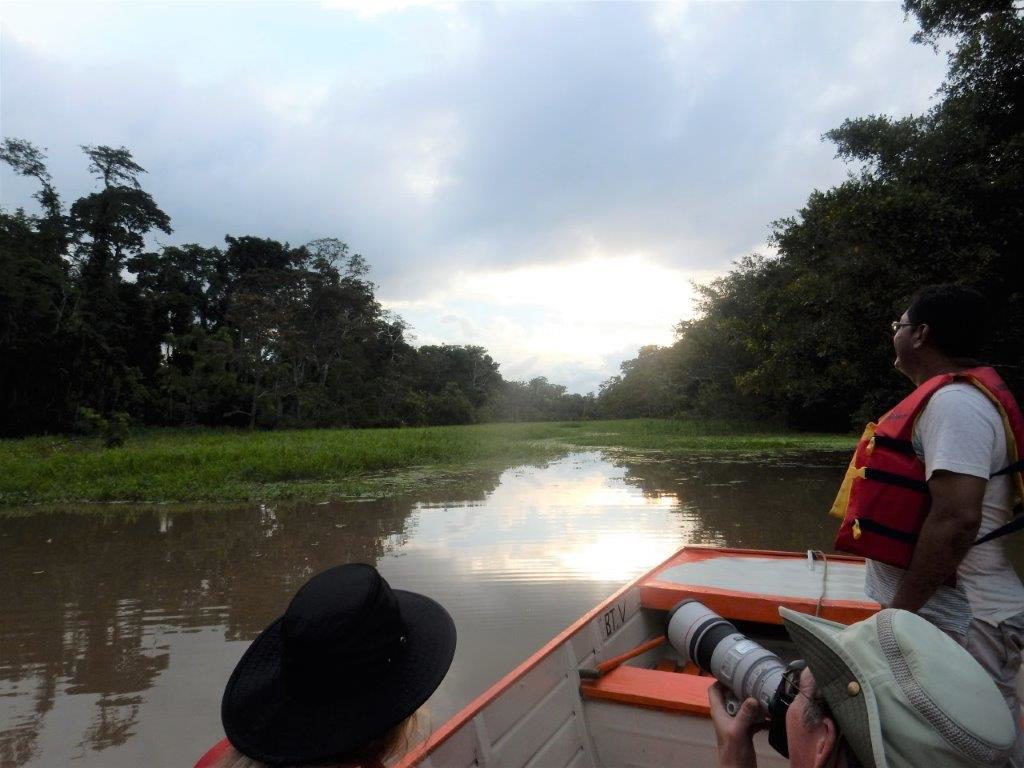 Dusk on the water. 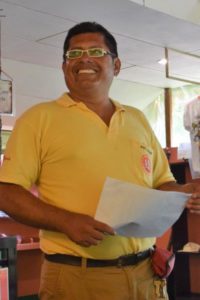 Guide Orlando Guerra gives us the scoop on the day’s itinerary.

Our guide, Orlando Guerra Alcade started his career at Explorama Lodge as a dishwasher almost 30 years ago. Orlando has family ties to the area, and a mestizo father and a Yagua mother. The guides’ work interested him right away. So he taught himself English from books and made every effort he could to converse in English with the tourists who visited Explorama. As his English improved, he was promoted to bartender, and eventually he succeeded in becoming a guide. Throughout the trip, he shared his knowledge of the natural world, the people, culture and history, and the political successes and challenges. When he’s not working as a guide for either Explorama or Overseas Adventure Travel, he lives in Iquitos with his family. He was great fun and truly a wonderful person to spend time with. 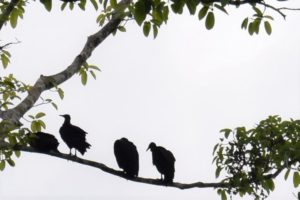 Guides can be just amazing, can’t they? Whereas I’m looking at the pretty green plants and tall trees and the way the foliage is submerged in the waters, Orlando helps us see so much more.  Take the sloth we see (only our first sighting at the time). Orlando saw the sloth high in the tree immediately, whereas I would have completely overlooked it. There are times when it’s best to explore on your own—and time when having an expert guide just makes the trip.

We’d miss seeing half the wild life out there without the help of our guide.

The same thing happens again with an iguana; I simply wouldn’t have seen it had it not been pointed out. 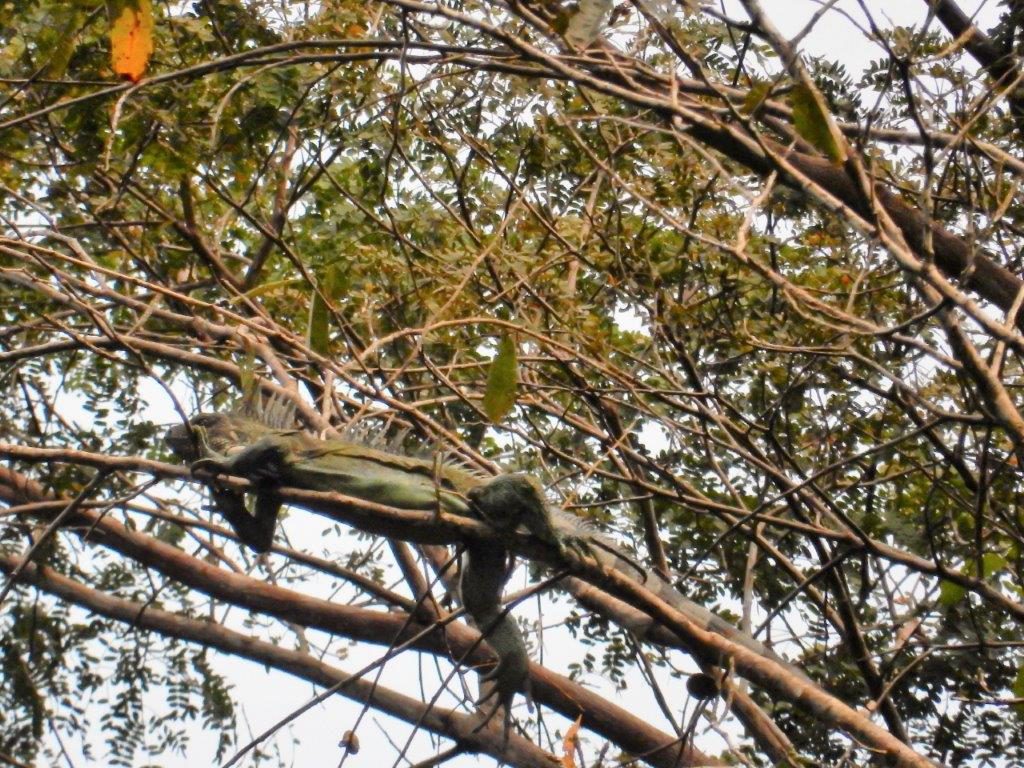 An iguana hangs out in the trees above us. 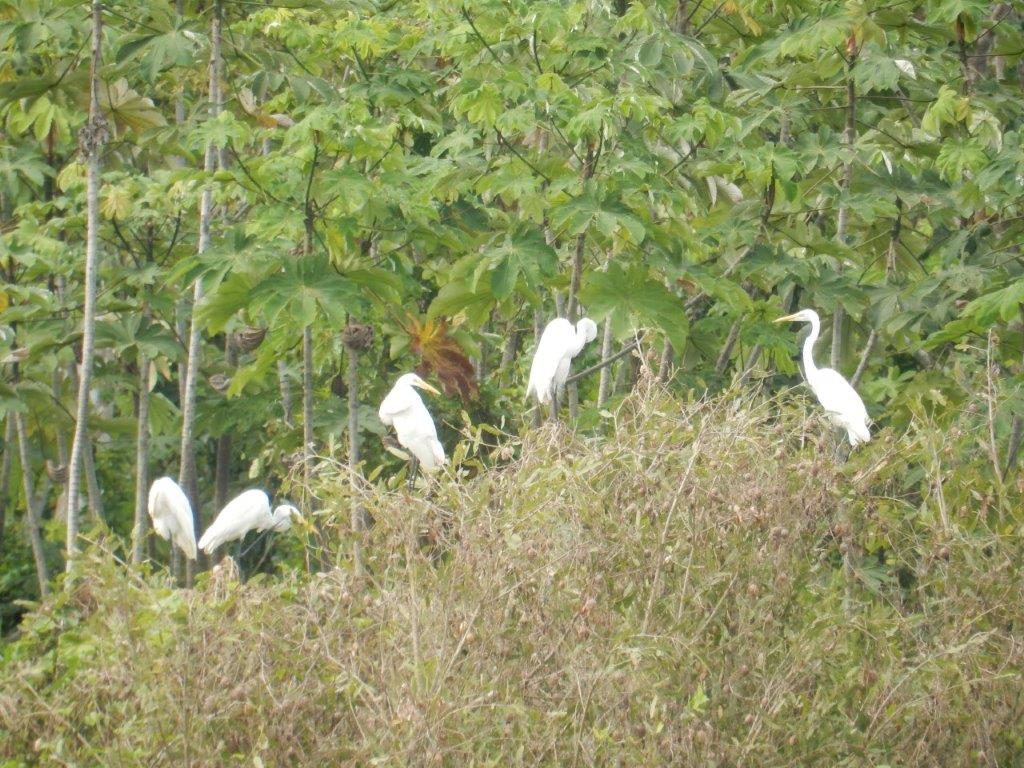 We come across a pad of Victoria Regina lilies, some six foot in diameter. 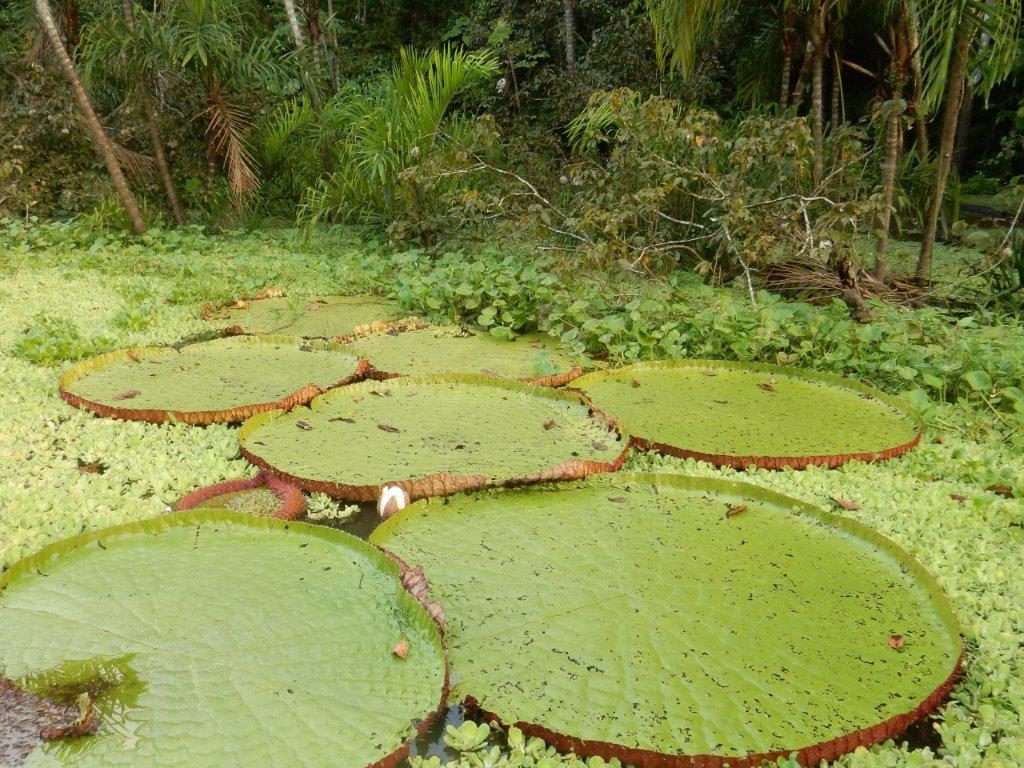 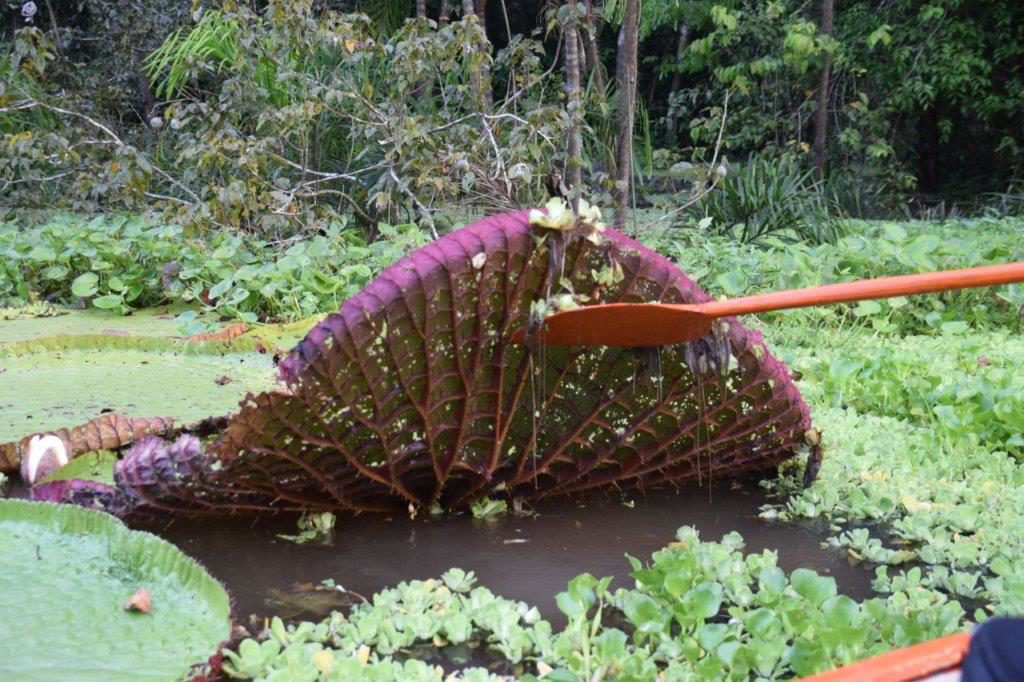 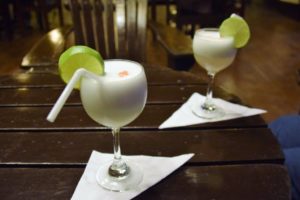 Our group is fine with sleeping under a mosquito net, but a good pisco sour is appreciated.

When we return to Explorama Lodge, it’s time for dinner. And a pre-dinner pisco sour, naturally. 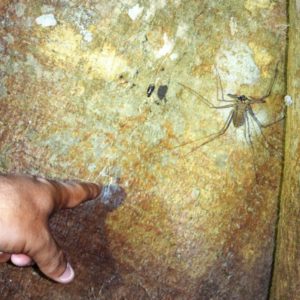 After a terrific dinner, a night-time canoe ride shows an entirely different view of the waterways behind the Lodge.

We travel down Yanamono Stream, which will be dry or too shallow to travel by boat several months down the road. Sleeping butterflies hanging from branches. A wee snaked is coiled on a branch. We shine our lamps on birds. We hear more about the medicinal qualities and use of the tree bark and plants on the river. We take in the darkness. 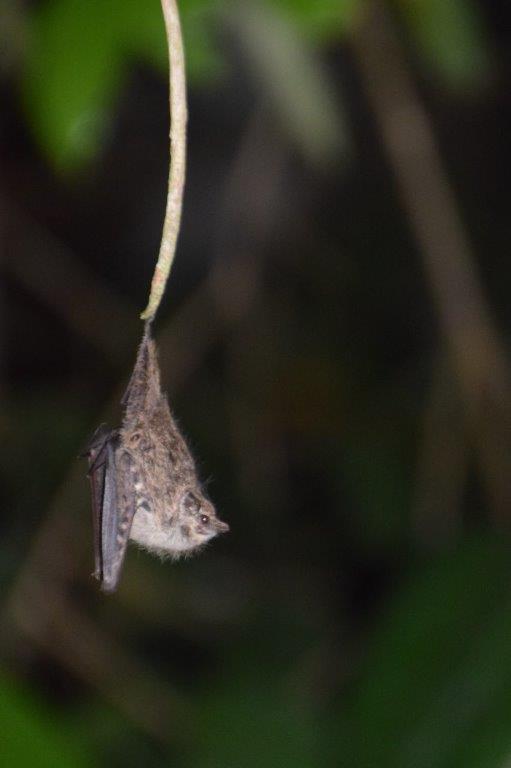 Bats weren’t at all disturbed by our (relatively) quiet presence.

The sounds! At one point, we stopped, turned off all our flashlights and just sat and listened. I’ve seen videos, heard the audio…but the live experience is even more wonderful. (This is where I just have to encourage you to experience this for yourself.) We round the final bend, and Explorama Lodge comes back into view. 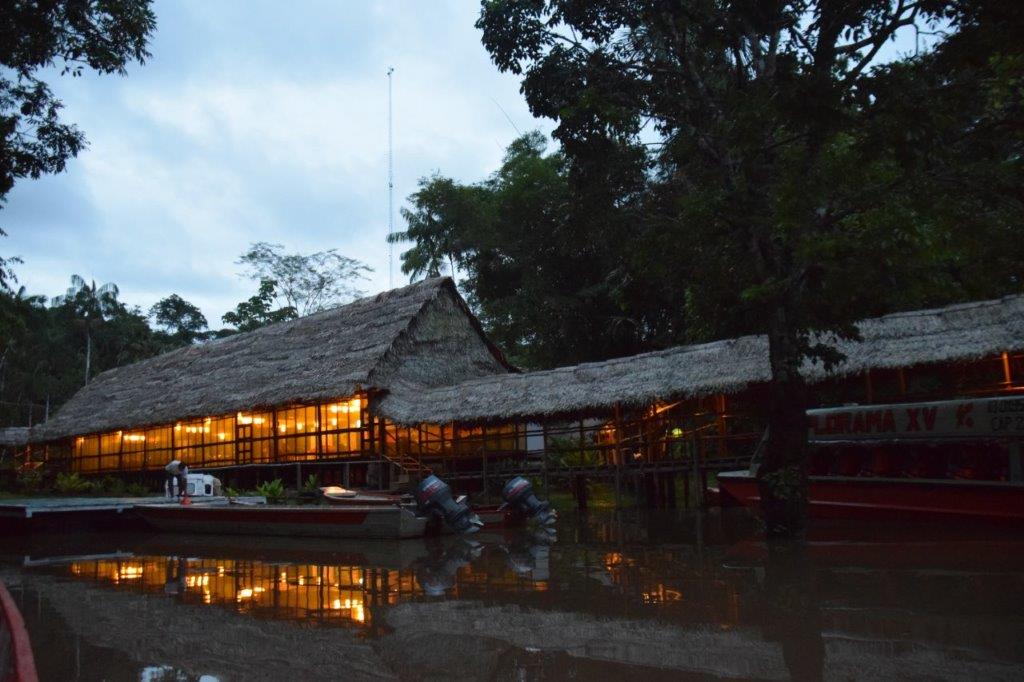 The Explorama dock in the evening.

Chat a bit, brew a cup of herbal tea in the lodge, then head back to our rooms, mosquito nets and all. And that’s just Day 1.