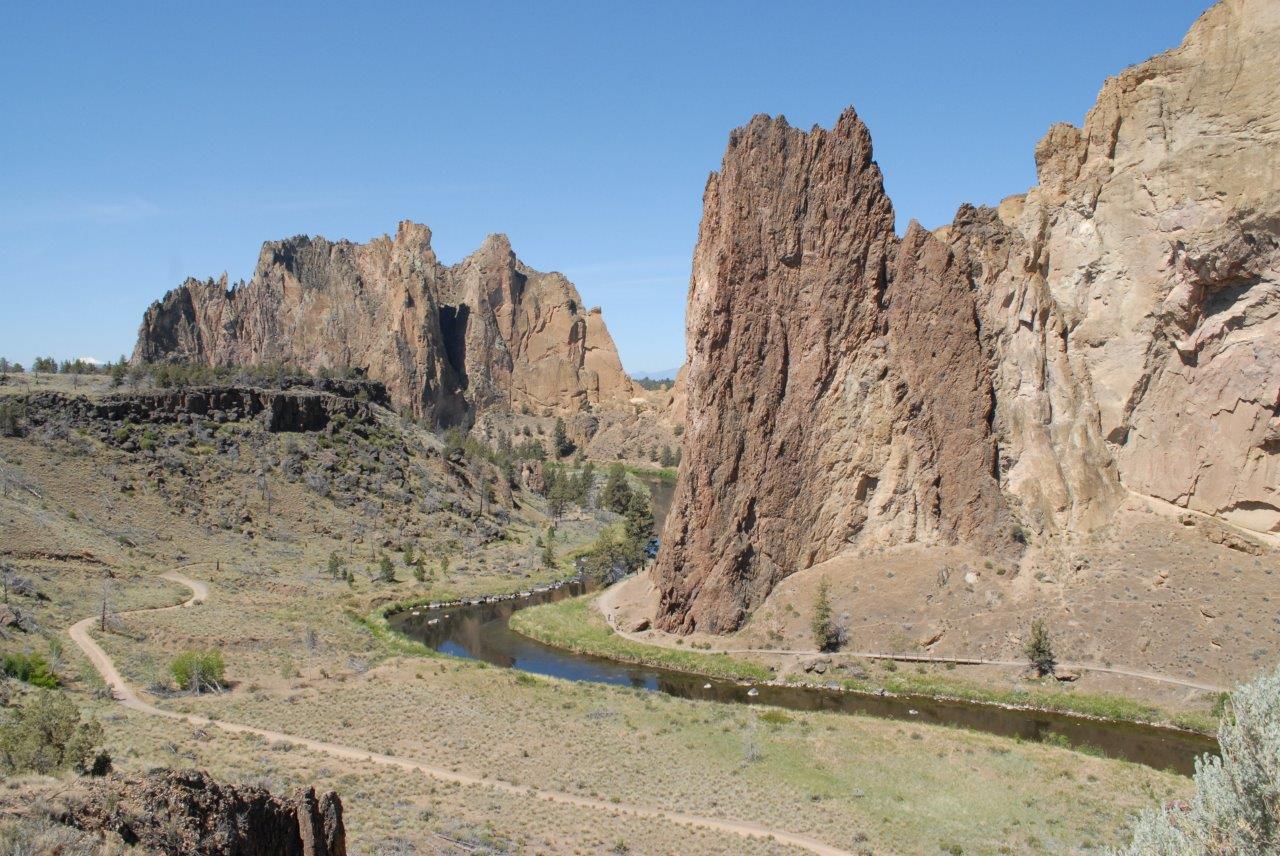 When I tell people I am “climbing” for the weekend, I tend to get one of two questions: “What mountain?” or “Which routes?” Rock climbing has a vocabulary that sounds ridiculous to someone who isn’t familiar with it. Rock climbing cannot be done on every type of rock face but under the right conditions, it’s as safe as climbing into bed. Although rock climbing is considered to be an extreme sport, with the right conditions and gear, it’s quite safe.

With the record rain and snowfall Portland experienced this last winter, every local yearns for some sun. After being away from Portland for 21 years, I wallow in the rain because those spring greens are so beautiful they almost hurt your eyes when they decide to pop. The dank of winter has just started to wain as the east side of the Cascade Range started to call my name. 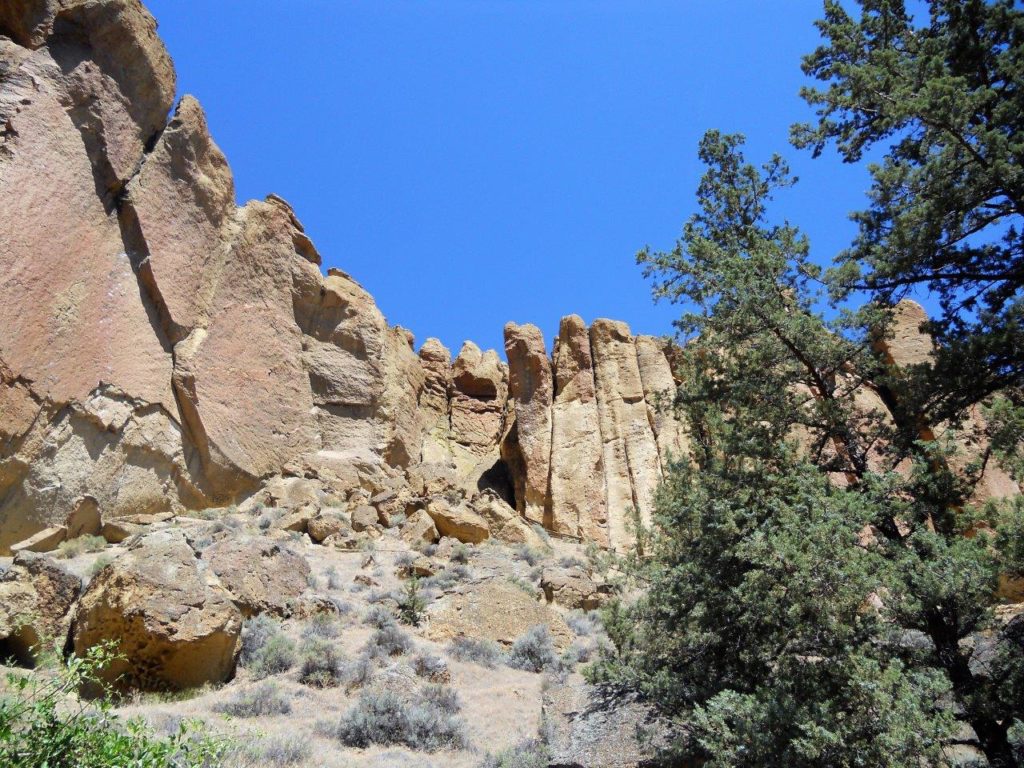 From Spring Rock Climbing to “Rock-tober”

This trip was first conceived during our last trip in “Rock-tober.” Rock-tober is the last great month of climbing in Central Oregon before the weather gets too cold or wet.

The climbing group is a hodgepodge of chronologically enhanced people who try to be called climbers. We are blessed with Smith Rock in our backyard, a bucket list climbing area.  Smith Rock has more magazine covers than Versace in the small circle of climbing publications. 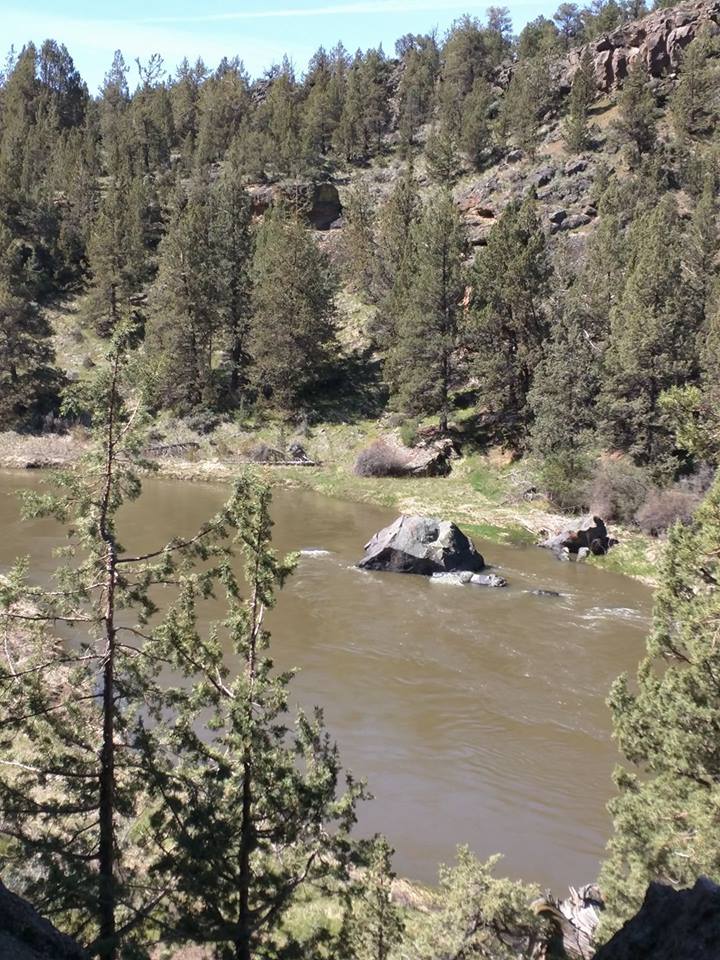 Our plan worked out perfectly. We left just before commuters would hit the roads like a bunch hateful road hogs. Our van arrived before lunch, which meant we had time to hit some climbing routes. 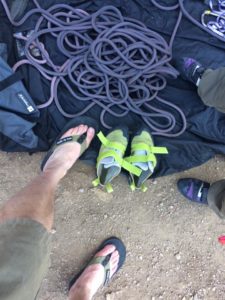 This mid-morning plan was to head around the point of rock that causes the Crooked River to make a sharp right turn. There we knew we could find climbing routes that would be in our scale to climb. The hike in to the routes is a little over two miles from the camping area but didn’t feel laborious because of the excitement of the pending routes. Before getting to Smith Rock, the talk in the car was that of work, life stress, and catching up. As I walked along I did the one final checklist in my head of what I will need today: Rope, Harness, Helmet, Green shoes, Dog supplies, Anchor gear, and Quickdraws.

As we round the bend and head up the rough-cut stairs, I was happy to find the place empty. We had decided to climb a route called “9999” in the area called “Southern Tip.” We climbed this route back in October with another friend, so we knew the metadata required to get to the top. We put the dogs on an anchor and dropped our rope at the base of the route, thereby claiming our route. In the shade, the weather was cold enough that my shorts and t-shirt were not cutting it. But in the sun, the thermal heat felt like a warm embrace.

Sara, my partner, turned to me and said, “I can’t lead yet because I am not in the right mental state.”

“I understand, I got it,” I replied. I can feel the anticipation as I put on my harness double checking that everything was safe. My harness is tied onto the rope, and I double check my trace back figure eight onto my harness. I then count my Quickdraws, making sure I have enough to attach to the bolts. Anchor equipment, nylon runner, four locking carabiners, repel device, hollow block and gloves. I could taste the dryness of my anticipation start. Turning to Leslie, my belay, I repeat my checklist out loud one more time.

I turn and face the rock wall looking up to the anchor dipping my hands in the chalk bucket to dry my hands to have the best friction possible. Communication is key in climbing both people know that the climber is about to leave the traditional terra firma.

Leslie responds with, “Climb on.” 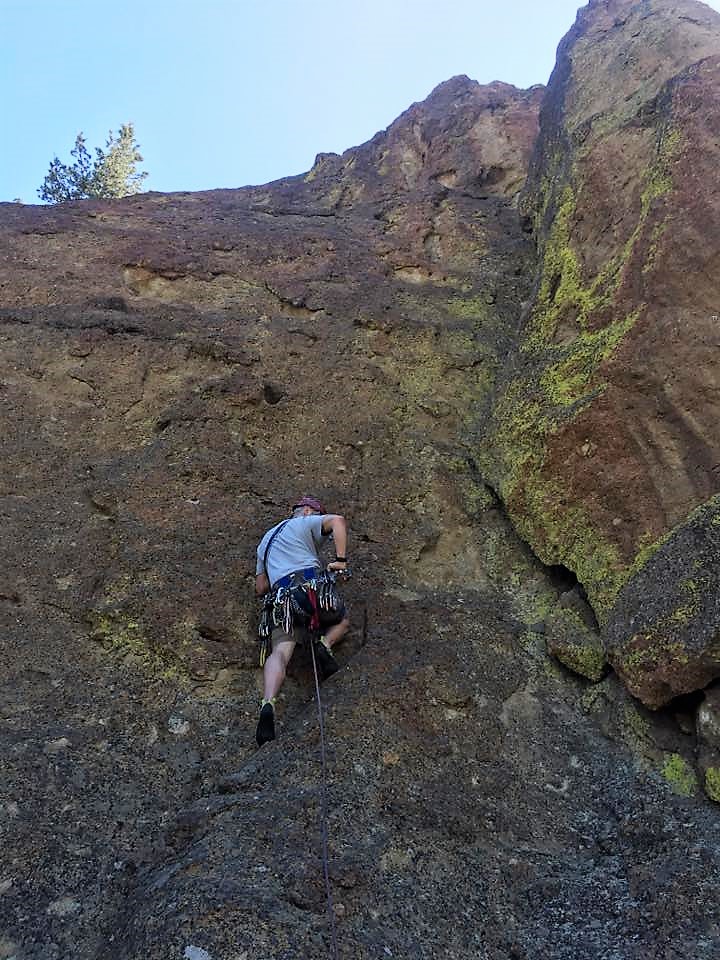 Leslie stood behind me with her arms up to lessen the impact if I was to fall before I had made it to the first bolt. Getting to the first bolt is a great relief since the rope now prevents you from hitting the ground.

“Clipping,” I call to Leslie. This means I am about to reach down and pull up rope to the Quickdraw and lock in so if I was to fall I would not impact the ground.

Sara and Leslie both called out, “Great job!” They understood that we climbing now that the anchor was achievable. I could breathe. At this point, the rock was still cold, but I was plenty warm. During the ascent, I climbed past an anchor but could safely recover. The anchor on this route is fifty feet above the start point. The start points tend to be twenty to thirty feet above the hiking route.

At the anchor, I clipped in and called down, “On safe.”  The adrenaline flowed in my body and I had to relax to put the anchor together so the rest of the group could top rope to climb with little to no risk. As a responsible climber, I built a top-rope anchor because the nylon ropes will cause wear on the anchors provided by donations.

To ensure that the anchor would not fail on my weight,  I call to Leslie “Take.” This means that she will remove the slack and allow me to put my full weight on the anchor. As I lean back into my harness I watch for any signs of failure as more weight is being transferred to the anchor. 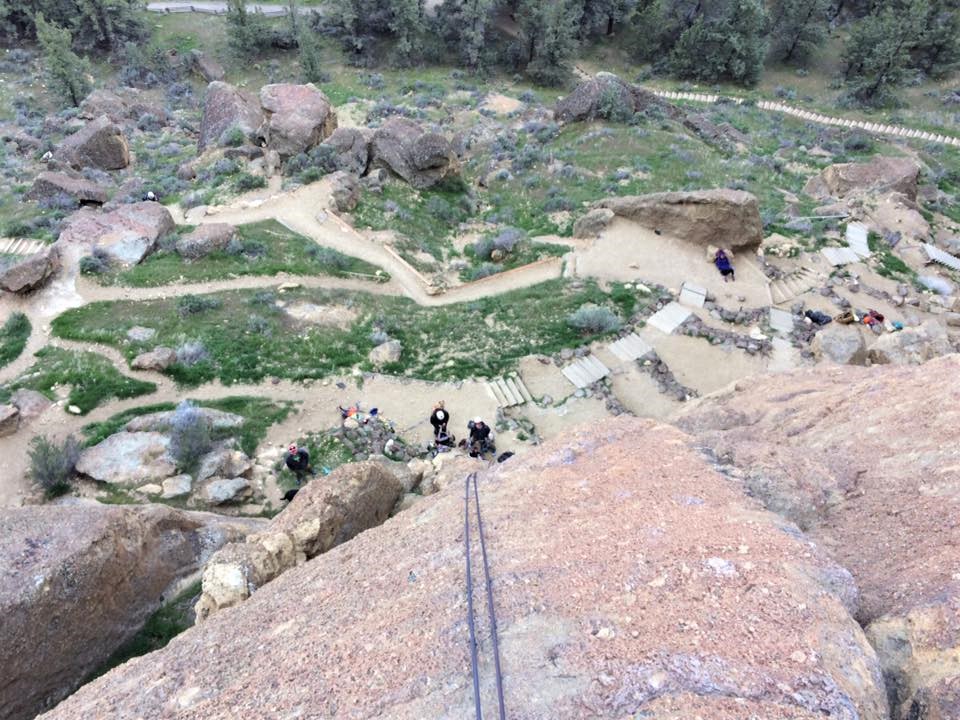 When I feel that it is safe, I remove my safety device and call to Leslie, “Lower.” 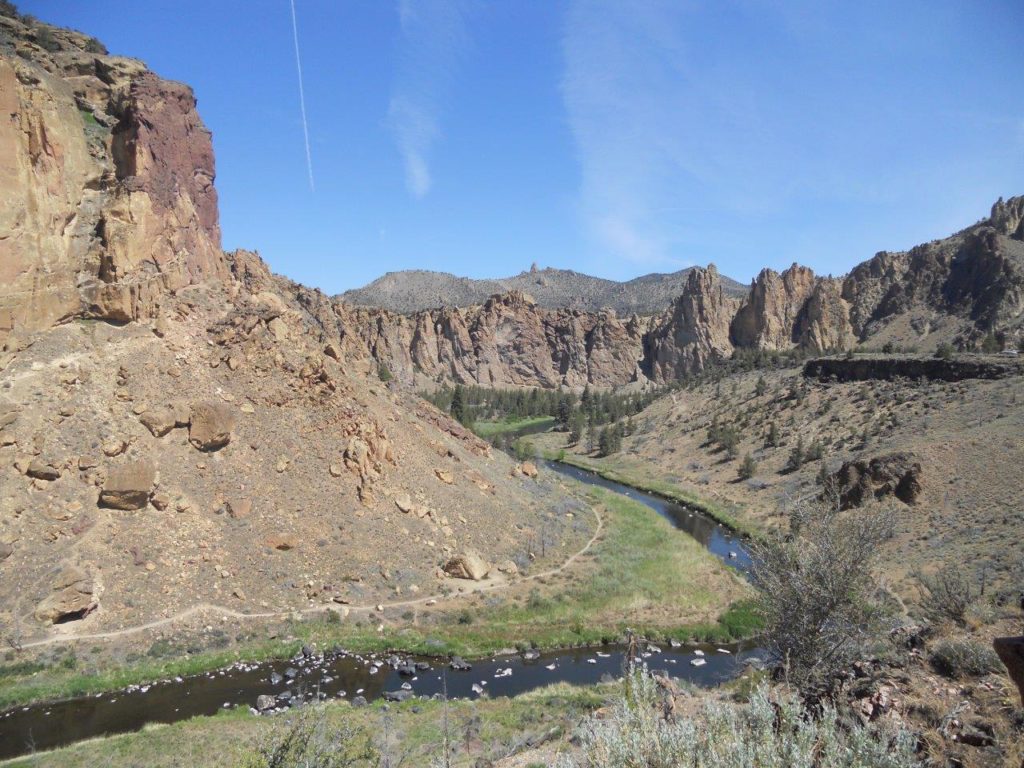 I must then walk down the wall while Leslie feeds the rope through her safety device. As I walk slowly backward, recovering the Quickdraws from the anchor bolts, the excitement of the climb set in. Once safely back to the ground, you feel combination of excitement, adrenaline, confidence and sheer joy.

On the ground, a wave of relief washed over my body. I knew I was safe, causing the endorphins to flow in my blood. I peel off my climbing shoes which could be compared to binding slippers. Hear the river flow by. I look over and realize that there is a strong drainage dumping into Crooked River that I hadn’t noticed before. The sun was kissing my skin and I heard the geese trumpeting to each other. What wasn’t in my mind was the feeling I forgot something or I needed to do something. Purposely induced fear is amazing at causing focus and enlightenment. Something I love about rock climbing is how you pay full attention to your surroundings and forget all the things that don’t matter. 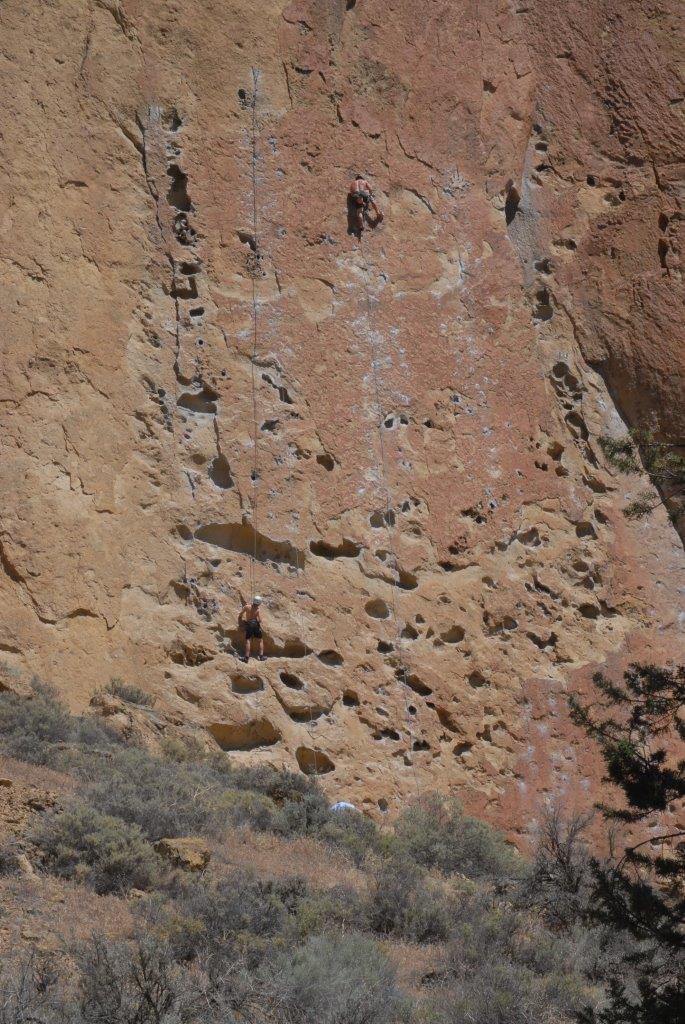 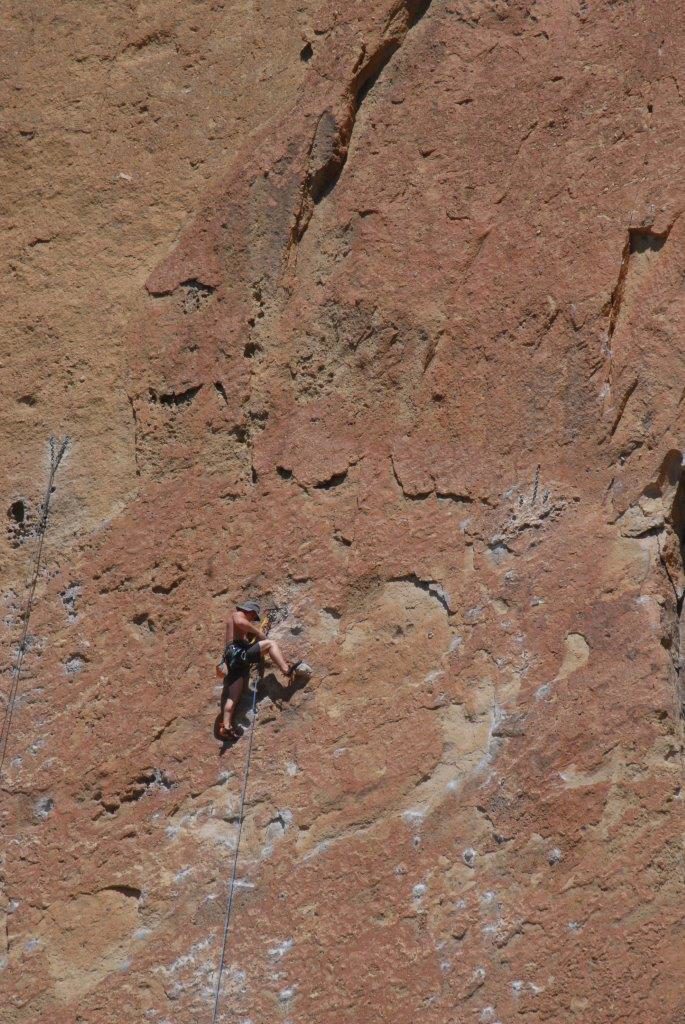 Some Definitions for Rock Climbing Beginners 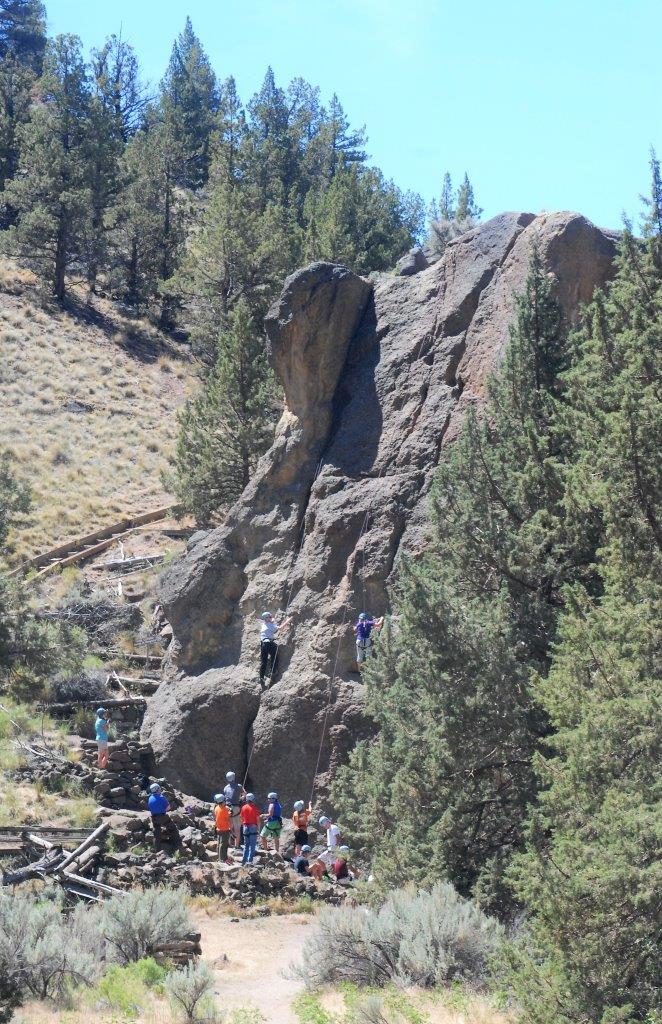 Taking lessons with a local outfitting company is the best way to learn the sport of rock climbing.

Want  to learn more or try your hand at rock climbing? Here are some resources to get you started.

Adam L Cook is retired from the Army after 21 years. Thirteen years outside of the United States. Twenty-six countries lived in or visited. Forty-eight states visited. Most consecutive nights in same bed: low double digits. Have passport will travel. To relax, I participate in the following sports: Rock Climbing, Trail Ultra-Running, Snow Shoeing, Biking, and Paddle sports. I am the therapy human for Parker, the 11-pound Bichon Frise who goes everywhere with me.

Peru’s Amazon Rainforest: About the Water

Does anyone do this near Chicago or northwest Indiana? The terrain is not nearly as ideal, but maybe there is some type of climb training occurring? I’d love to try it!!

Once you try it you will be quickly hooked. One great thing about rock climbing is that it does not require the classic mountain terrain to practice the art of climbing. Mountain Project states, “Illinois holds hundreds of miles of exposed rock. From the Limestone of the Mississippi and Ohio river valley’s to the Sandstone of the Shawnee Hills, this Midwestern state offers a lifetime of stone to enjoy.” https://www.mountainproject.com/v/illinois/105911816.

If you are in the Chicago area, I recommend checking out any of the 12 gyms to get a feel for climbing. Most gyms will provide an entry level training with gear rental for a reasonable price.

When you are ready to climb a bucket list location that is only 600 miles from Chicago called Horseshoe Canyon Ranch. This location is on my top five list of climbing areas.
https://www.mountainproject.com/v/horseshoe-canyon-ranch/105903004

I hope this helps and enjoy your time sending on the crag. Might even see you at the 24 hours of Horseshoe Hell in the future.

Thank-you for the suggestions. I appreciate it!!

Hi Eileen! We say, go for it. I’m originally from Chicago and my first thought was Baraboo, WI. Turns out, that’s a possibility. Here are a few sites to get you started:
https://www.climbmidwest.com/
https://www.midwestmountainguides.com/
While we can’t personally endorse these options, look into them, ask questions; they may be just what you’re looking for. While not right in the neighborhood, you can add a great road trip along with learning a new outdoor sport.

Good luck…feel free to come back and let know how it goes!

Glad you enjoyed, Steve, and hope you can make the trip out.