Weird and Wonderful: Portland in Winter 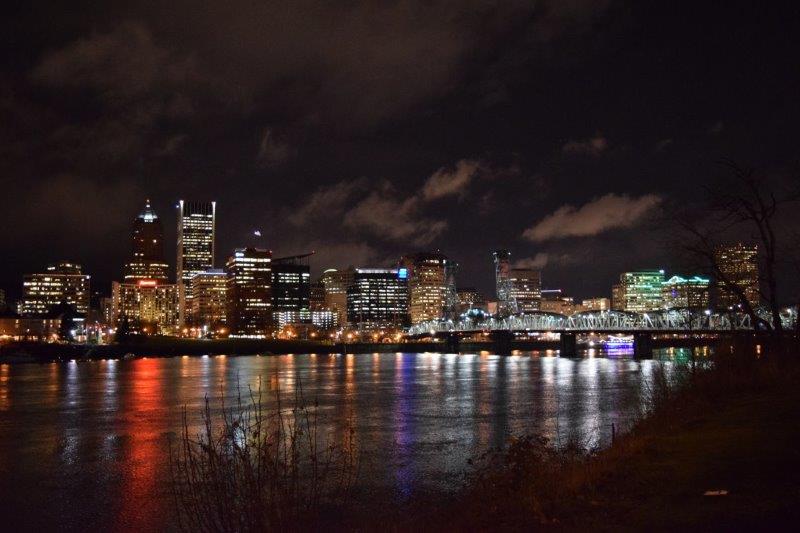 Portland in winter is not prime season for visitors, but there is a certain charm about the place in December with all the holiday decorations and Christmas cheer—plus the winter airfares can be a real bargain. We’d heard for a long time that Portland is a great place to visit, so we decided to spend a few days there and see what every one is talking about. We packed for cold and wet winter weather and wisely so, and since we were bundled up we didn’t focus so much on the weather and just enjoyed all the weird and wonderful aspects of the city. 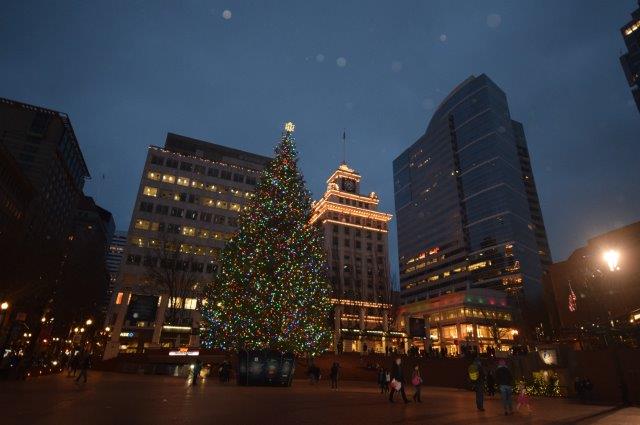 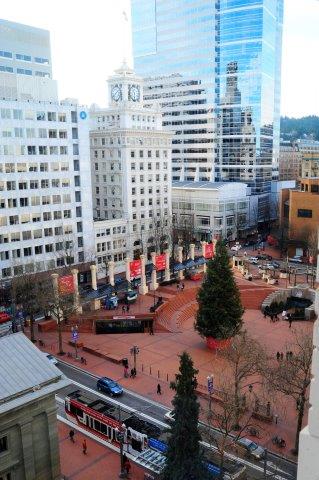 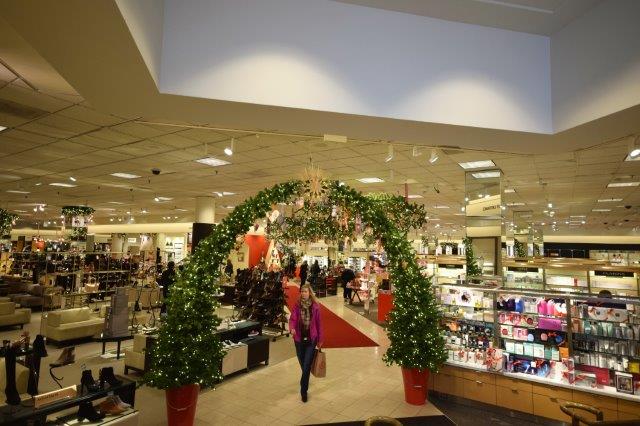 Dressed for the holidays. 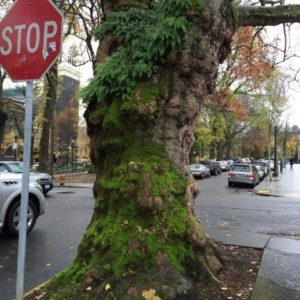 Everything is covered in moss. (Photo Rick Goulian.)

Portland, Oregon got its start in the early 1800’s as a logging town and was once nicknamed “Stumptown;” but its official name came from Portland, Maine. The city itself is now home to over half a million people.

We originally planned to stay at the Radisson at the airport (where I have points) and rent a car.  But the more we talked to others who had been, it became obvious that to really visit Portland you have to be in downtown Portland. So plans were changed and we booked three nights at The Nines hotel, downtown on Morrison Street. This turned out to be a great decision. Having the ability to wander through the streets visiting restaurants & bars as we came across them without worrying about the 12-mile trek back to the airport made all the difference and it is probably the single biggest reason we really enjoyed our visit so much. 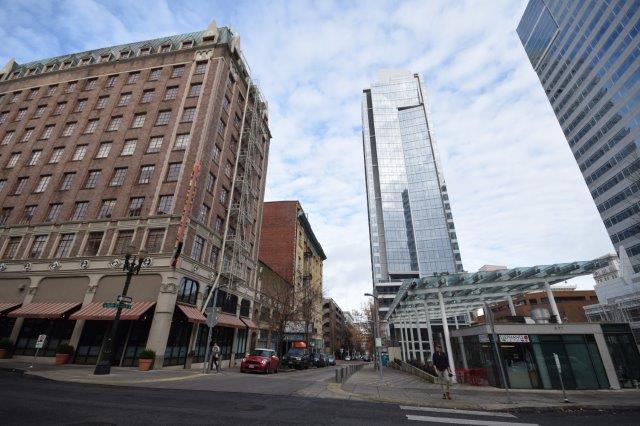 As it turns out, the Nines Hotel is right on the light rail route from the airport (the MAX Red Line) and it drops you off literally at the hotel front door so you are not dragging your luggage down the street. You are right in the middle of downtown at Pioneer Square with amazing high-end shopping malls, an Apple Store, Macy’s, etc. And that same convenient light rail can also take you to other more distant areas–such as the distillery district, known as Distillery Row. More on that in a bit.

The Nines is a very nice five star hotel with a Priceline rating of 8.6 out of 10. It is a Starwood Preferred hotel so I was upgraded and our room was spacious and cozy. The bathroom was very roomy as well, with lots of counter space. The beds were a bit softer than we prefer but the rest of the amenities made up for that.

They have a couple of good restaurants–the Departure restaurant at the top floor of the hotel has an excellent view though it was too crowded to get a table when we were there.

The Portland MAX light rail system is very well planned, convenient and affordable. A $5 pass gets you all-day access to Portland, which includes the streetcars on the east side of the river. The cars are clean and we never waited more than about 15 minutes for one. 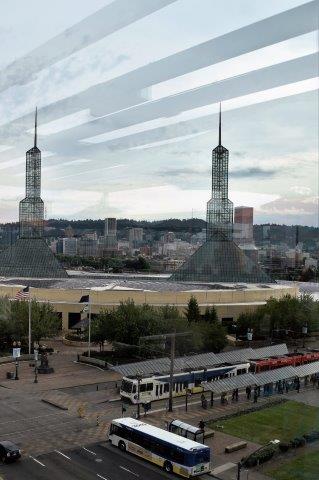 Portland’s MAX trains are a great way to explore.

I’d be lying if I said there are not a lot of homeless in Portland. They are everywhere, and it can be a bit disturbing to see them surviving on street corners in the cold, wet weather (it easily gets into the low 40’s at night). Though there are many city-provided shelters, they apparently fill to capacity during the winter season. Though they will ask for money, the folks do keep mostly to themselves and we never felt threatened. It’s really no different from San Francisco, New York, or Austin.

I am a big fan of Uber, and it works extremely well in downtown Portland. They arrive quickly and the mandatory front bumper license plate helps you easily identify your approaching ride. We used Uber a lot when we were tired of walking (which was often) and its one of the reasons we saw as much of the town as we did in three days. 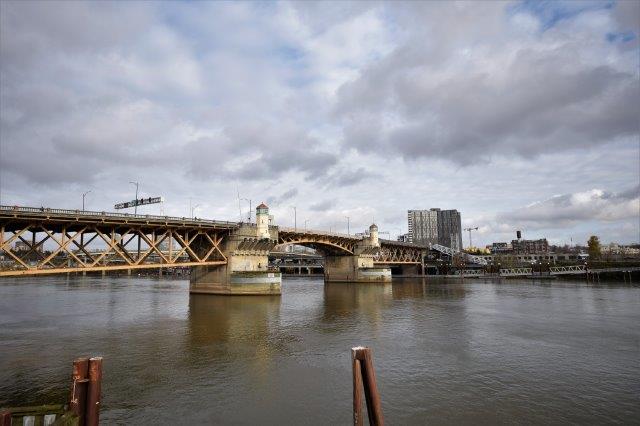 A winter view of the Willamette River. 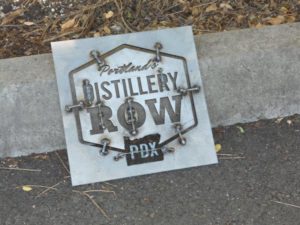 When we heard that there was a collection of distilleries in Portland we had to check it out, so we hopped on the light rail, map in hand, and headed east across the river. When we got into the neighborhood we asked locals exactly where these distilleries were. And the funny thing was, no one we asked knew about it or could even point us in the right direction. We persevered and eventually made the discovery ourselves, but we thought that it was odd that the locals were so oblivious.

But the trip was worth it because we visited at least three (uh, can’t really recall the exact number…) micro-distilleries and sampled some very good “artisan” liquors. 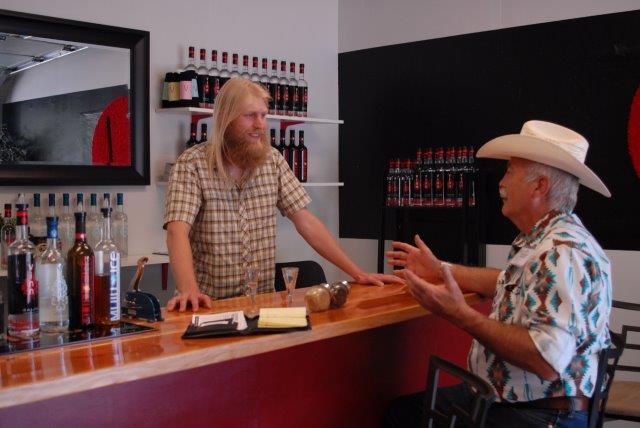 Tasting at Vinn Distillery, including samples of their baijiu.

There is an interesting spirit at Rolling River Distillery; an aquavit, which is made from caraway seeds and has a very unusual taste. 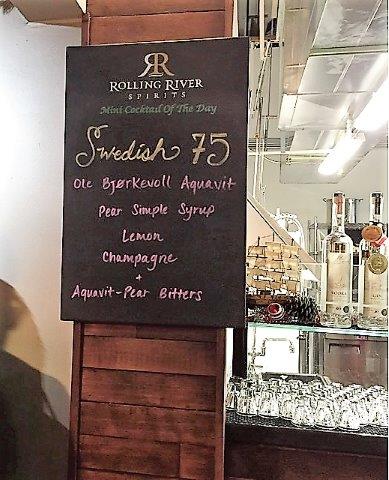 Having spent a lot of time working in Austin, I often found myself comparing Portland to the quirky Texas capitol. There are quite a few similarities between the two cities, such as the young population, their political leaning, the eclectic mix of people & eateries, abundant food trucks, the homeless population, and their obvious artistic talents. Both cities take great pride in their self-proclaimed “weirdness,” but I think Portland wins on that front. It certainly contributes to the city’s charm. 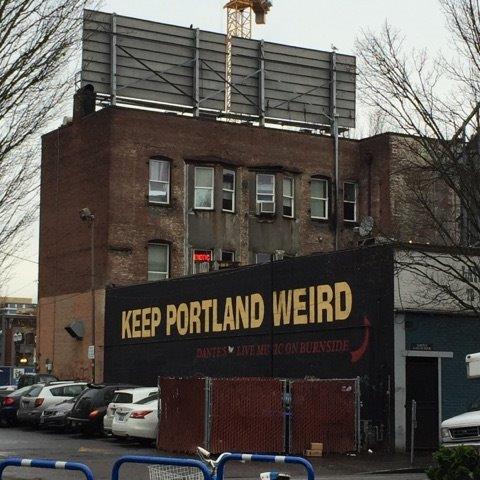 Portland takes two things very seriously: Good food, and good beer. I’m not a big beer drinker but the few micro-brews I tried were very good. We did however sample copious amounts of food and we did not have a single bad meal. You won’t find many chain restaurants in downtown Portland and it’s almost overwhelming to figure where to have your next meal–they are all unique and interesting in some way so you want to try them all. 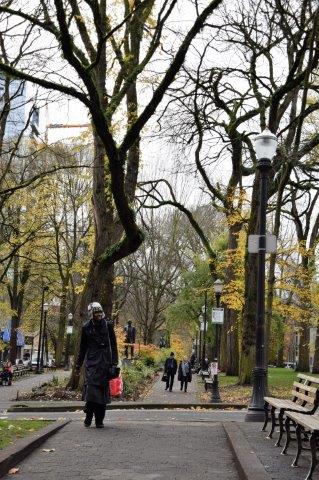 Our approach was to ask locals for recommendations in the area and here are the most notable places we visited: 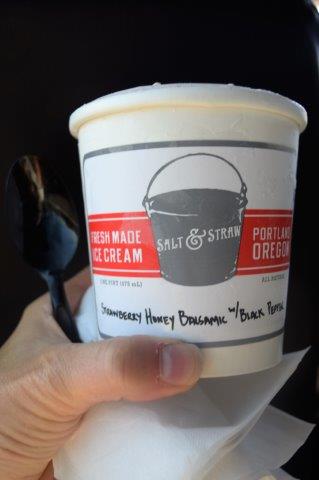 Salt & Straw ice cream is made in small batches, with fresh ingredients. 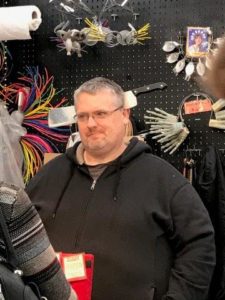 Located at Tom McCall Waterfront Park, this market is not only huge, but it has some of the most unique and unusual items I’ve seen. You can easily spend a few hours perusing the local vendors’ wares. Amazing woodworking, pottery, and jewelry are everywhere as well as many other items. I was amazed and impressed by the selection and we came home with our bags full. 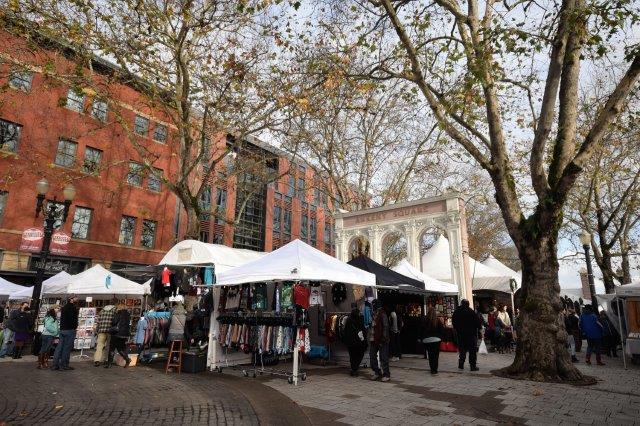 The Powell Book Store claims to be the “Worlds Largest Independent Book Store,” but since there aren’t many independent bookstores around anymore it’s not much of a brag. It’s still an impressive collection of new and used books and you will quickly get overwhelmed with the sheer volume of selections on the shelves.

The Portland Art Museum at 1219 SW Park Avenue is also worth a visit – the Andy Warhol Exhibit was there when we went. The collection includes Native American, Northwest, as well as modern & contemporary art, and an impressive silver collection too. 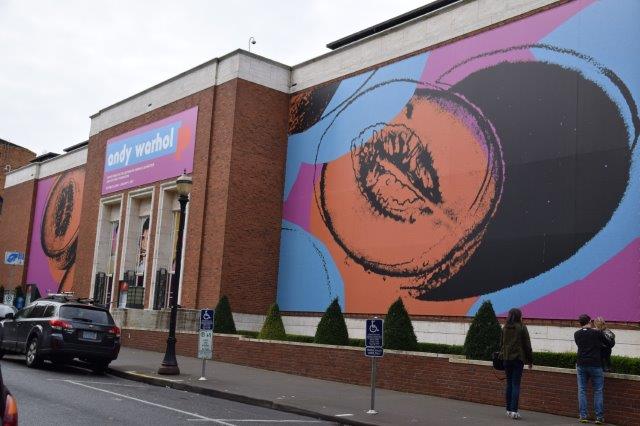 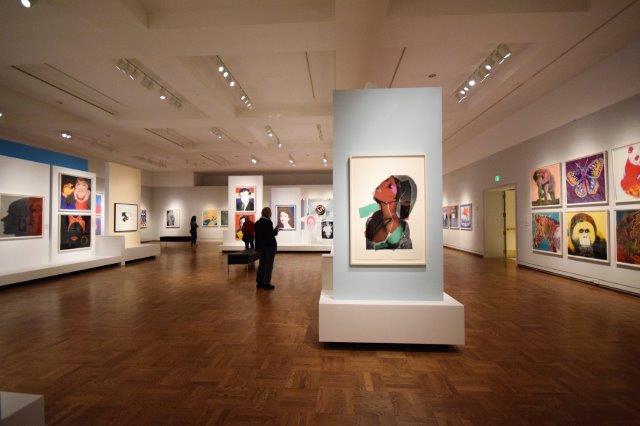 A current exhibit features the largest collection of prints.

There are quite a few outdoor attractions that we would have visited if the weather was nicer but did not get to on this trip, such as the Hoyt Arboretum, the Japanese Garden and Washington Park.

Why You Should Go

Portland is much nicer in summer and fall weather-wise, but don’t be afraid to try Portland in winter. Between the great airfare bargains and the zero-percent state sales tax, it’s a great way to get your holiday shopping done while you enjoy the great food and eclectic atmosphere. Just be sure to pack warm clothes and let your wanderlust be your navigator. 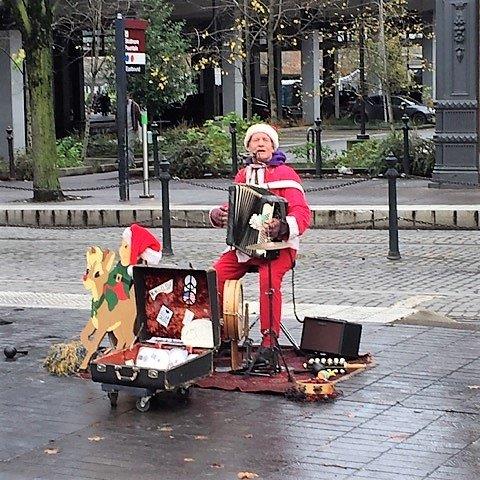 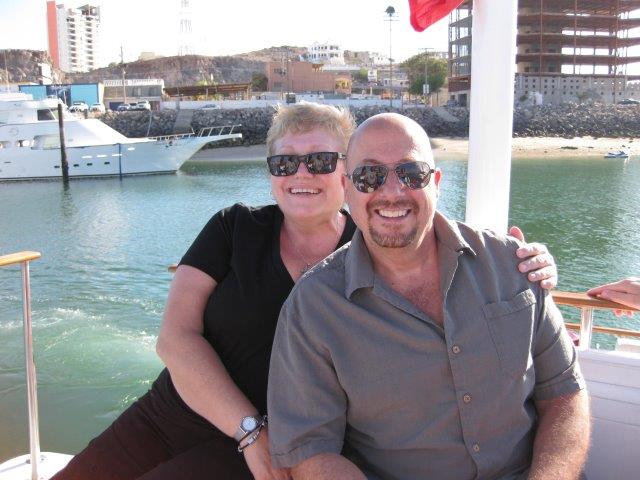 Rick and Mary Goulian have been passionately traveling the U.S. and Europe for over 30 years. (Photo courtesy Rick Goulian.)

-Photos by Nancy Zaffaro, except as credited to Rick Goulian.