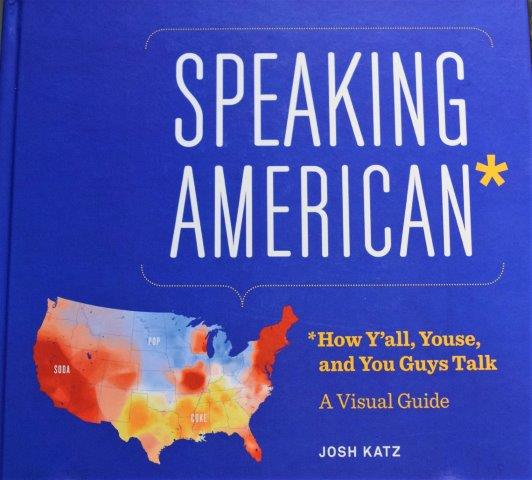 Josh Katz, author of Speaking American: How Ya’ll, Youse, and You Guys Talk, A Visual Guide, gives us a graphic guide to some of the American English words, phrases and pronunciations that you’ll hear regionally throughout the U.S.

It’s a pleasurable and informative guide that can be read-through or just paged through randomly. Katz is Graphics Editor for the New York Times, with a degree in statistics from North Carolina State University. In his book, he assembled the results of the 2013 New York Times online survey that gathered data about how Americans speak. The survey collected the responses of more than 350,000 people.

This book makes it a fun-to-read, enjoyable guide, filled with maps, graphic illustrations, and photos.

The Book is divided into sections that tackle “How We Live,” “What We Eat,” “How We Sound,” “Where We Go,” and “Things We See.” The sections discuss for example, what we call a (and I’ll used my own terms) garage sale, roundabout, a highway, and a cougar, and how we pronounce syrup.

Interspersed throughout, there’s a “How to Pretend You’re From ___” section for each state. These point out expressions or pronunciations that are especially representative of the state, or city in the state, rather than wider, regional ones. In Boston, for example, “you might hosey (claim) the front seat of the car on the way to the common.”

Before satellite radio, iPods, and nationally syndicated on-air radio station programming, listening to the radio on extended road trips really allowed you to get a feel for the local dialect. Broadcast strength would float in and out as you entered a new area, you’d fiddle with the tuner to find the best signal. Our language has become more homogenized, but many regional colloquialisms and pronunciations persist.

As travelers, you’ll probably know most of the regionalisms included here, but you’ll likely learn a thing or two as well.  (I’ve never heard of saying “on line” for waiting in line, which he attributes to New Yorkers, for example.)

Perfect for Lovers of Language, and Travel

As a writer and reader, my love of language runs deep, and I first discovered the field of linguistics, specifically socio-linguistics and neuro linguistics, in college. (This is interesting, fun stuff!) I felt some nostalgic a few times when I came across expressions or pronunciations my father used to say. He spent most of his life in Chicago, but his family was originally from Louisiana and we got used to his (what we considered) humorous disparities. (He never did learn to leave the “s” sound off “Illinois.”)

This isn’t a book of in-depth research from the academic world of socio-linguistics. Mention is made of William Labov, one of the first to delve into this area, but that’s about it. (Katz mentions Labov’s research with the “Northern Cities Shift,” which recorded regional tongue placement for vowel sounds.)

Katz’ book is great to have on your shelf before you travel in the States. There’s an Index of Places to quickly look up a city or state before a trip there and find the little bits that make that place unique. When you return, use the Index of Terms Used to look up an expression that you heard but want to learn more about.

Speaking American is an entertaining book to have around—and it makes a great gift for the linguistic aficionados or travelers in your life.

Weird and Wonderful: Portland in Winter