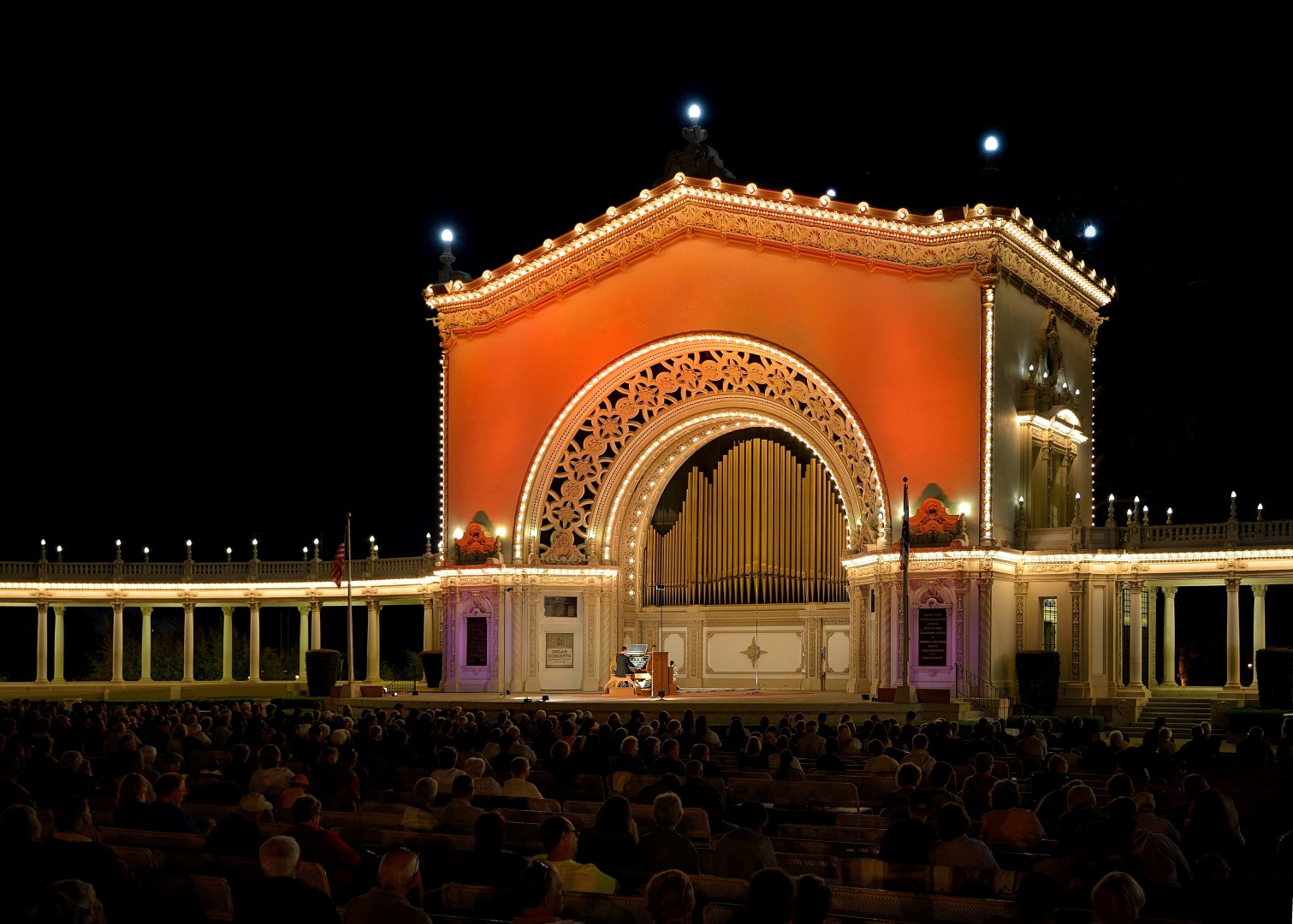 The Spreckels Organ in San Diego’s Balboa Park is jazzing right along and keeping up with the times. The Spreckels Organ is the largest outdoor organ in the world. This gal has been giving concerts since 1915—over 100 years—and odds are it will still be around jigging and jiving and in 2118 and beyond.

Often associated only with chamber music, the organ can play jazz, blues, full orchestral sound, marches, and waltzes – you name it. Last year, they held tributes to Prince and to David Bowie.  And can you imagine “Light My Fire” and “Riders on the Storm” played on the organ during The Doors tribute? So, don’t think for one minute that organ music is past its prime.

So, Why an Organ in San Diego?

In 1915, San Diego city leaders decided to hold an exposition to coincide with the opening of the Panama Canal. Intended to enhance commerce and trade by exposing San Diego’s assets as the first port of call to shippers exiting the canal, the organ was an opportunity for a small city to increase international exposure and highlight San Diego’s excellent harbor facilities.

John D. Spreckels, a shipping and sugar magnate and prominent San Diego civic leader, committed to building an outdoor concert pipe organ for the Panama-California Exposition, in Balboa Park, where the Exposition was held. 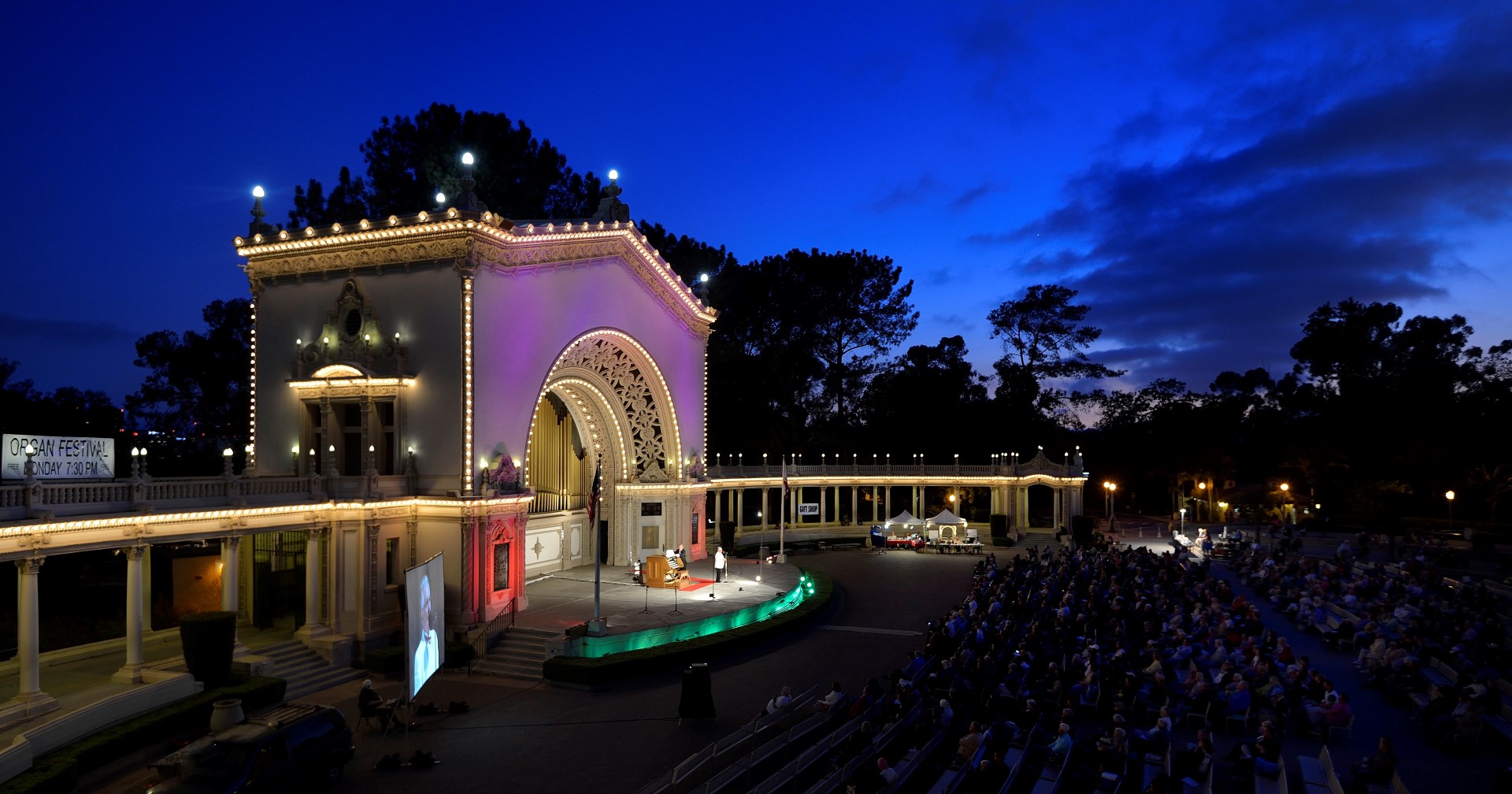 Several companies that built pipe organs at the time turned him down. They expressed concerned about the practicality of an outdoor organ. Not to be deterred, Spreckels found the Austin Organ Company willing to accept the challenges. The organ construction endeavor resolved Spreckels proceeded to hire an architect and design a structure to house the organ.

The Spreckels Organ: What A Structure It Is

This incredible musical instrument is housed in an equally amazing 75-foot high Neo-classic-styled central dome that shelters the organ body. The arch above the opening for the organ is covered with images of angels blowing trumpets, flowers, leaf clusters, satyrs, quatrefoils, and shell designs. The central arch directly over the organ is finally covered with an overall embroidery-style motif. On either side of the dome, semi-circular Grecian colonnades stretch out, creating a feeling of envelopment in this imposing location.

In the daytime, the radiance from the elegant façade of the 63 exterior glowing gilded pipe display is impressive. At night, the 1,600 lights embedded in the main arch create a dazzling display. These pipes screen the functioning parts of the organ although only 15 of them are actually speaking pipes; all cover the internal components of the organ.

When not in use, the organ workings and its console are protected from the occasional rainstorm and the sun’s rays by a 25-foot tall metal roll-down door. For further protection, the organ faces in a northerly direction. Barometric pressure and heat can affect the performance of the organ. 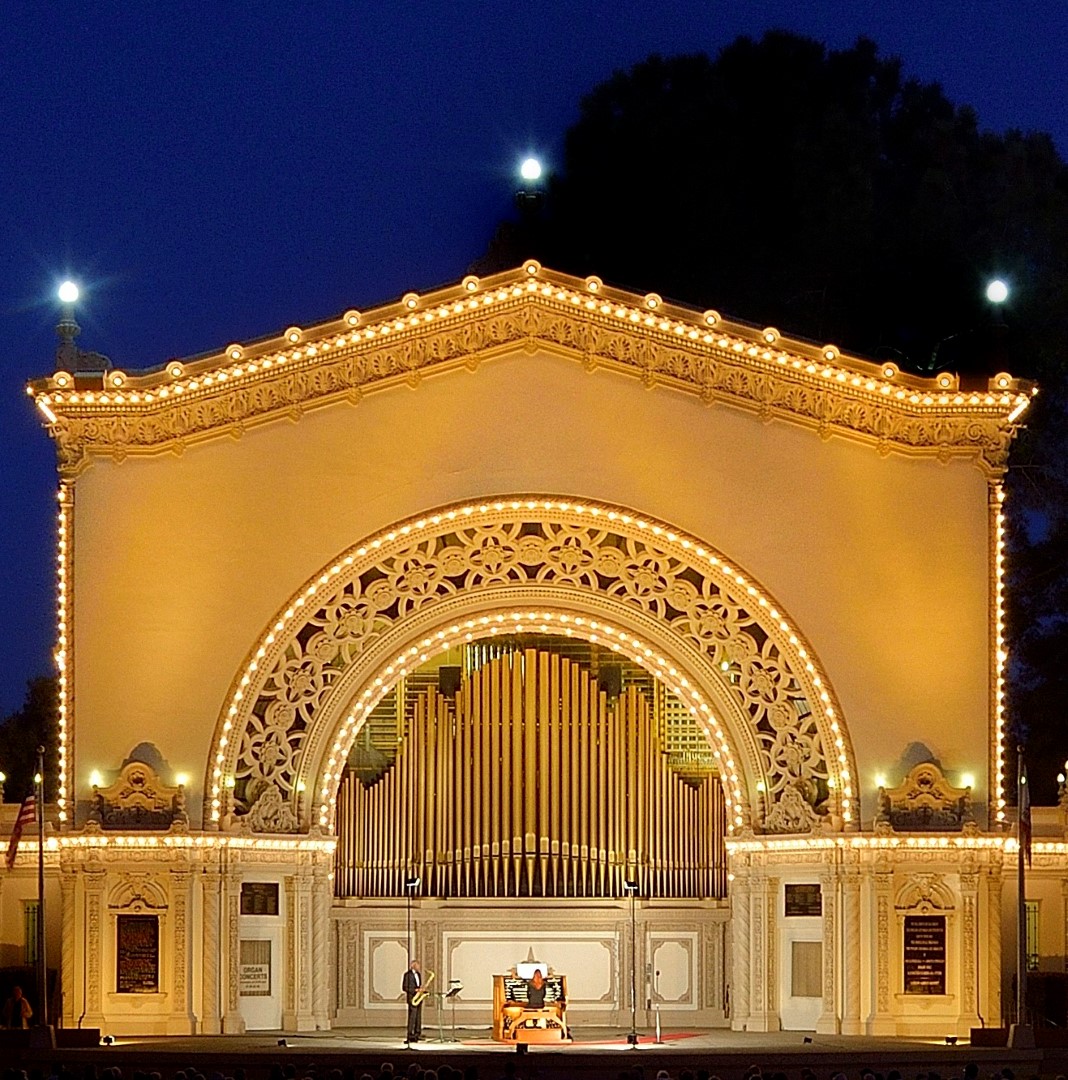 The Spreckels Organ Is the Largest Outdoor Organ in the World

I met with Spreckels Organ Society Executive Director Ross Porter to learn more about the history and operation of the organ. It was a treat to have him explain just how an organ works and watch the organist prepare. I can safely say, when you talk of bells and whistles, you ain’t seen nothing yet!

The organ is a synthesizer using air like a bellows to create the sounds of oboes, trumpets, percussion instruments, flute, strings, French horns, and clarinets. One hundred forty-six pipes alone produce string sounds. Many pipes were additions made long after the original organ was built.

Maintained by the City of San Diego in conjunction with the non-profit Spreckels Organ Society, the society supplements the civic organists’ salary and sponsors the Summer Organ Festival.  It is complemented by donations from the public. Renovations and additions to the organ made through the years have been funded by donations.  Lately, the organ has been able to add a tuba, a glockenspiel, and a xylophone to its musical collection, bringing the total number of pipes to 5,005. 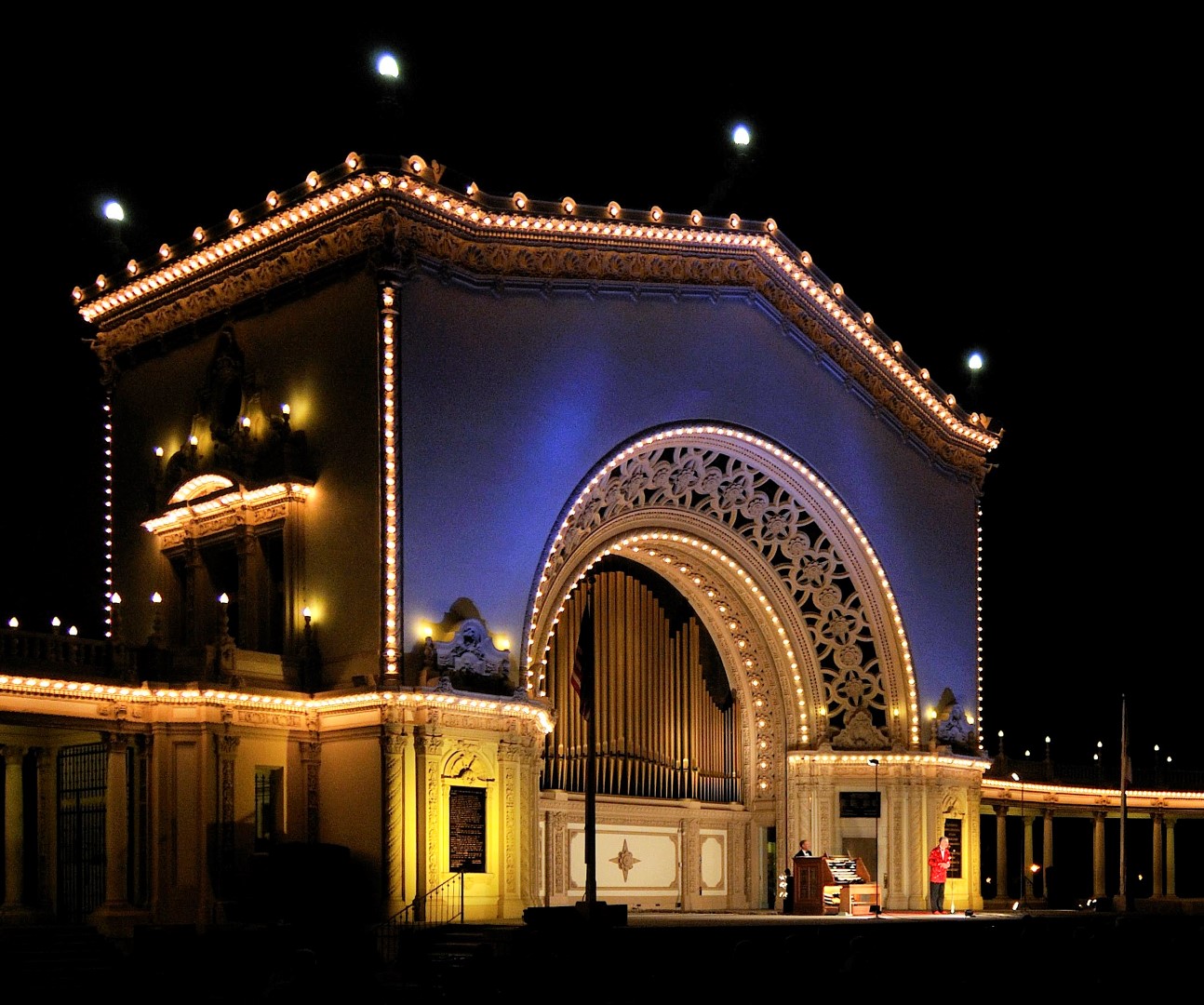 What Is An Organ Anyway?

An organ is a wind instrument. Wind is forced through pipes or reeds under the control of the organist and produces various instrumental sounds. The organist, via a console, controls the amount of air that enters through the different pipes to achieve the desired musical effect.

The earliest known use of an organ was probably in the third century BCE. Called a hydraulis, this rudimentary Greek invention was apparently regulated by water pressure. Over time, organs were wind-operated like giant bellows. The organist depressed keys on the console causing valves on the pipes to open with air forced over the lips of the pipes creating sound. Air pressure through the pipes does not vary. Pipe organs can simulate the sounds of many other instruments and have been common in Christian churches since the late Middle Ages. 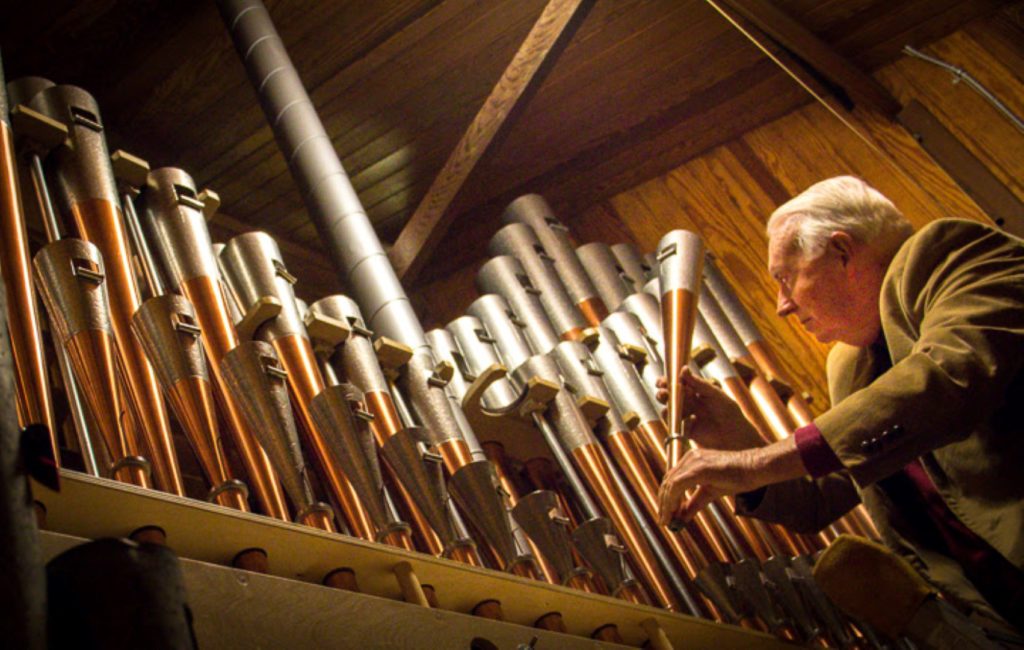 By the 18th century during the High Baroque period, the organ reached its prominence. Johann Sebastian Bach was probably most renowned for his organ compositions.  Wolfgang Amadeus Mozart, Felix Mendelssohn, Handel, Liszt, and, of course, Wagner were recognized as much for their playing skills as composing.

In the early 1920’s, organs were popular instruments at fairs, expositions, civic, and communal gatherings. Organ music expands to fill the space around it and can actually be heard for miles. An organ in play is not to be ignored and gathers people from distances, thus its popularity at large public gatherings.

Throughout the year at 2:00 P. M. every Sunday, free public one-hour concerts are held. In the summer months, the Society presents the International Summer Organ Festival. Two-hour summer evening concerts take place on Mondays. Extra concerts are given on January 1st, and the 4th of July if it fall on a Sunday or a Monday. Throughout the year, many other concerts benefit local charities and raise funds for scholarships.

Outdoor seating accommodates 2,500 people benches directly in front of the main pavilion. Wide terraces and open spaces behind the seating encourage picnicking. For the evening summer concerts, many people like to bring a picnic basket, a blanket, a bottle of wine, and be enchanted by a lovely, music-filled interlude. Ironically, the organ has quite a following of well-behaved canine followers who show up on a regular basis and seem enthralled by this musical wonder. 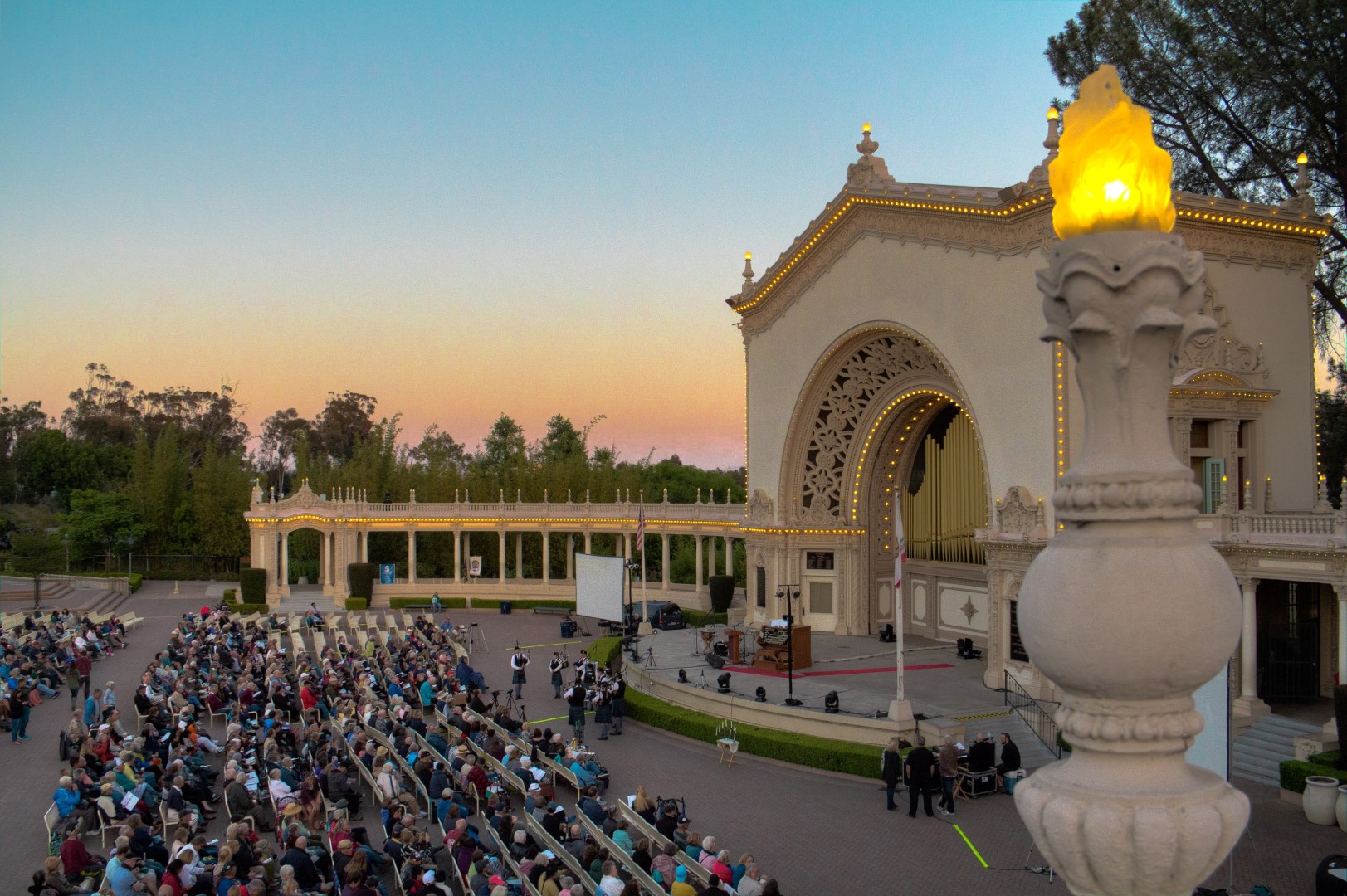 Over the years, the Spreckels Organ has had a number of Artistic Directors and Civic Organists. Raúl Prieto Ramirez recently stepped in to take the place of Carol Williams who has so aptly filled the Civic Organist position for the last 15 years. San Diegans are sorry to see Carol leave but excited by this new organist. 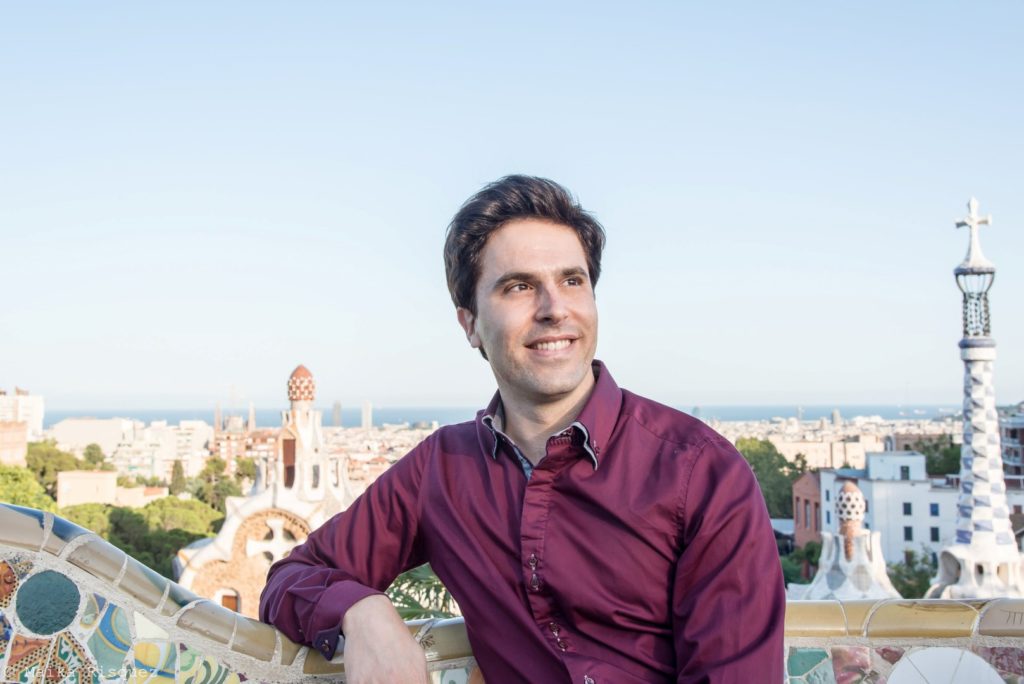 Silent films are shown on a giant screen starting in August when the sun goes down just a little earlier. Just as days before movies had sound, the organist accompanies the action on the screen with sad, melodramatic, or spellbinding music to mimic the action. For the silent movie nights, the organ can play castanets, tambourine, cymbals, train whistles, doorbells, triangles, and real bells. The silent film shows culminate with the widely popular Halloween night concert that often features “The Phantom of The Opera” starring Lon Chaney. 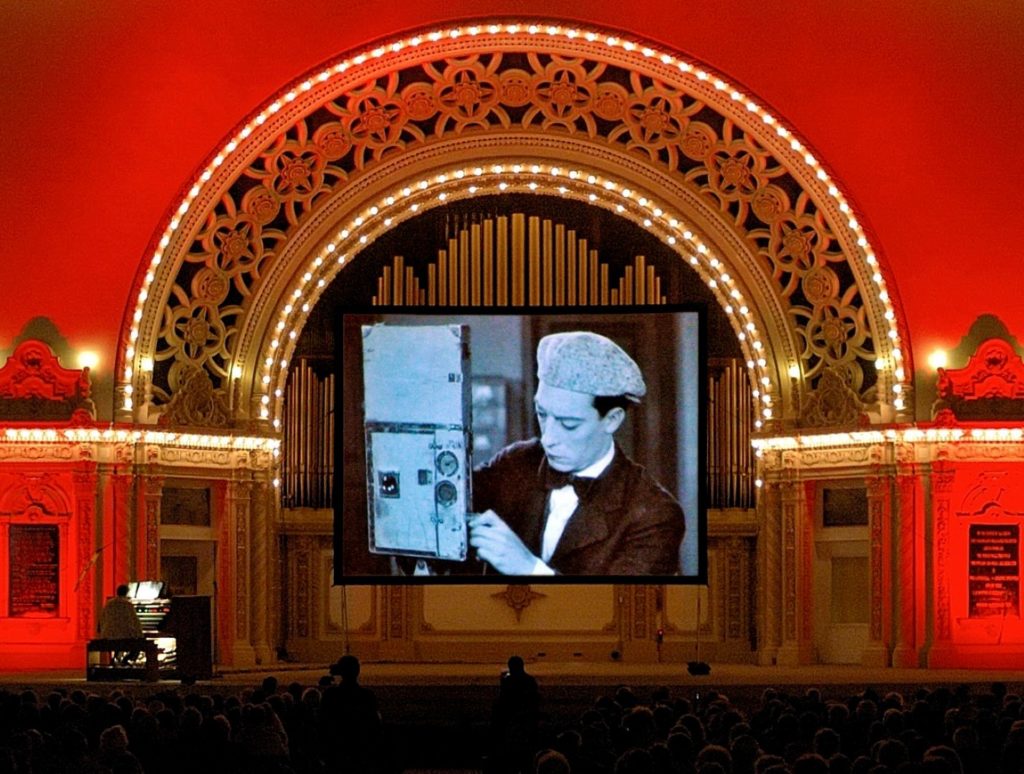 The Christmas holidays give the audience an opportunity to participle in the annual sing-along concert and tree lighting ceremony. The holidays often feature the San Diego “Weiner in a Winter Wonderland,” a special parade for the San Diego Dachshund Club usually adorned in their finest festive holiday garb.

Guest organists often perform along with musicians, choirs, or dance groups, some local, others visiting on tour.  Entertainers who have performers along with the organ are the Vladivostok Russian Girls’ Choir, the U. S. Marine Band Southwest, the Trapp family, the San Diego Civic Youth Ballet. One special treat is the Scottish pipers, who appear repeatedly.

The City of San Diego is blessed to have this community treasure, and if you visit San Diego, make it a point to be in Balboa Park at 2:00 P. M. for the free Sunday concert. The Organ is at the southern end of the Plaza de Panama in Balboa Park.

You’ll be captivated by the concert and enjoy wandering your time visiting the rest of Balboa Park; it makes for a great days’ outing.

I left behind a corporate job and now life’s a lot more fun. I was bitten by the travel bug at 2-years old when my family moved to Europe. Today, I’m a published travel writer with articles in Parachute, TravelMedia, Pink Pangea and Travel Post Monthly. It’s the best job I’ve ever had. I’ve visited most of Europe, 47 of the 50 United States, Canada, the Caribbean, Mexico, and South America. Next on my agenda: destination unknown? And, Portugal, still haven’t been there yet. Right now, I spend part of the year in Bogota, Colombia. I’m a nomad and travel on my own, though I don’t speak the language or know anyone at my destination. I know I’ll always have an abundance of new friends by the time I pack my bags again. My address book is now filled with names, addresses and phone numbers from places I have been. A member of Travel Media, The Association of Travel Writers, The International Travel Writers and Photographers Alliance (ITWPA), Travel Massive and Women Traveling South America Writers Group. Inquisitive, curious, and adventurous, I’m an explorer at heart. That will be me: asking questions and wandering purposefully.

In the Middle of It All: San Francisco’s Japantown