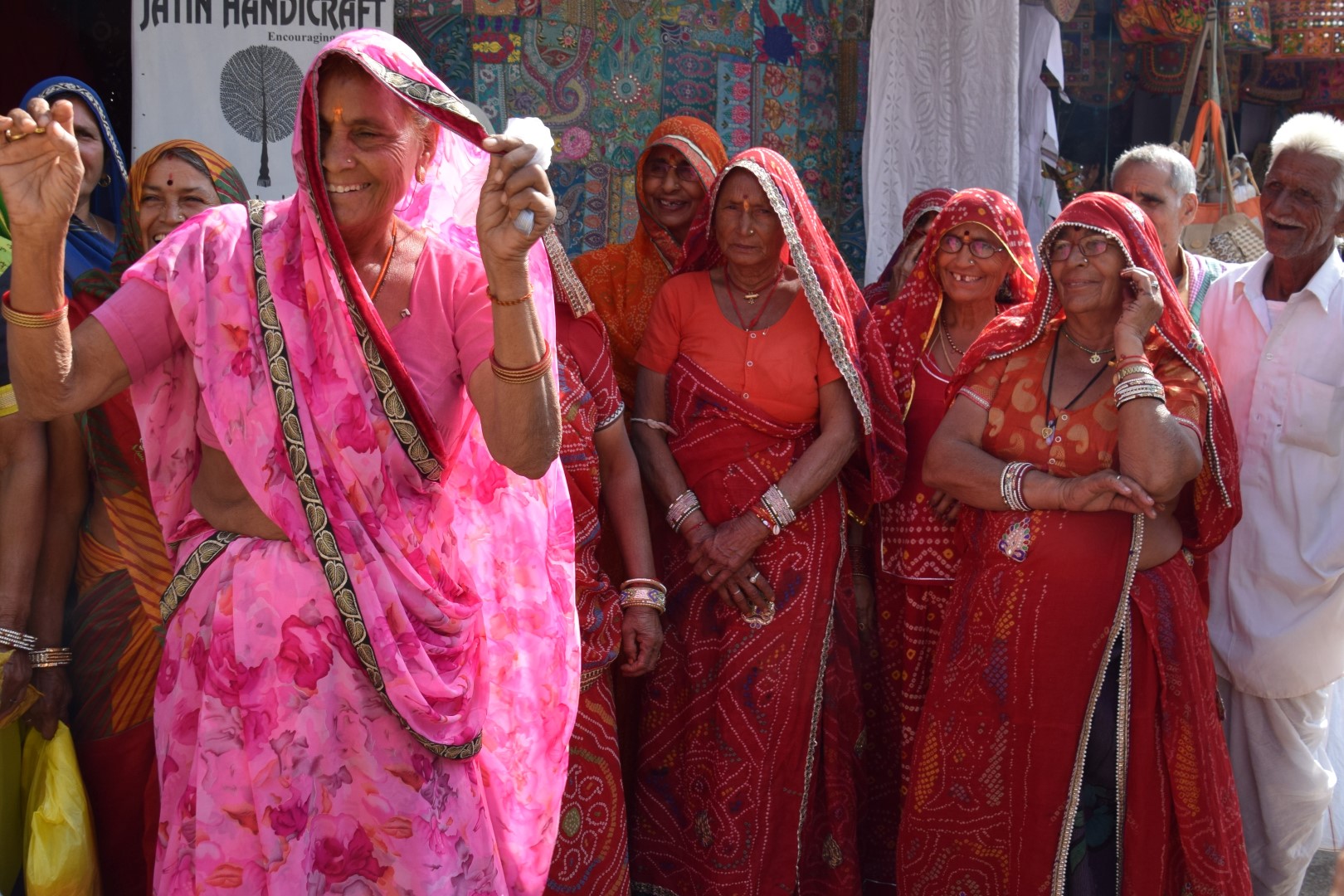 It’s impossible not to get caught up in the energy and drama of India’s Pushkar Camel Fair. Smiles are wide and clothes are colorful as Pushkar’s population swells from 22,000  to 200,000 during the fest. And where else can you buy camel ear plugs, pompoms and all of the other accoutrements to deck out your camel? 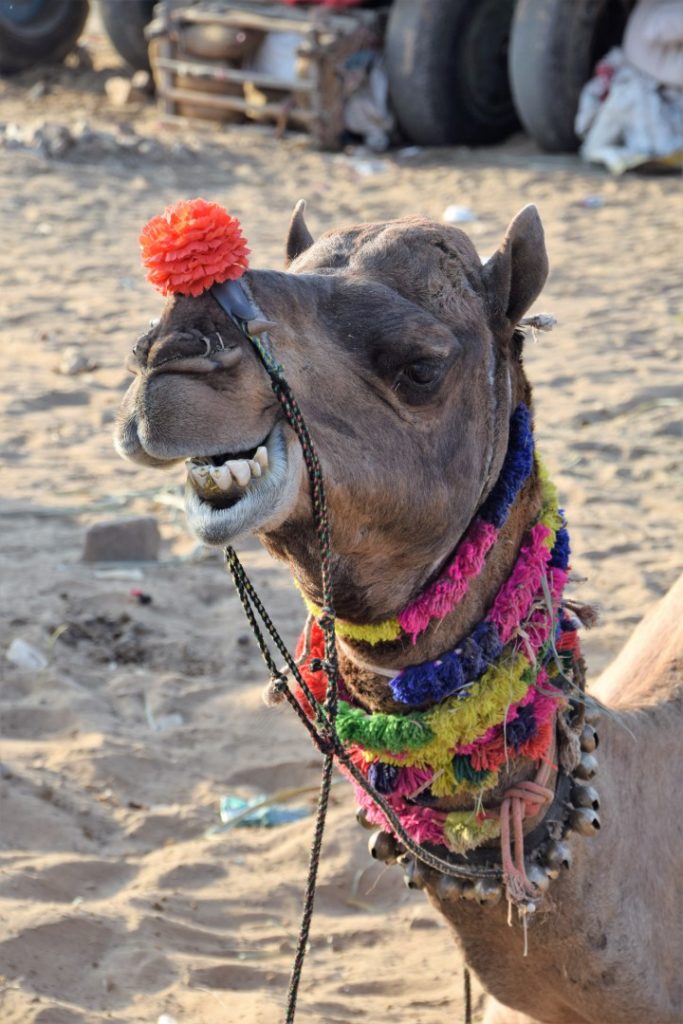 The Pushkar Camel Fair, or Kartik Mela, is the largest camel market and fest in the world and is held for five days every October or November, depending on the Hindu lunar-based calendar. The drive out to Pushkar is 91 miles southwest of Jaipur, about a four hour drive, at the edge of the dry and arid Thar Desert, across flat landscape west of the Aravalli Mountains. (Both public buses and trains will get you there.)

In spite of its name, the festival isn’t just about camels. It’s actually a livestock festival, where horses and cattle, as well as camels, are bought and sold by tribal farmers and breeders. It’s also a time when people from throughout India’s largest state, Rajasthan, make a spiritual pilgrimage to Pushkar, one of India’s most sacred cities. 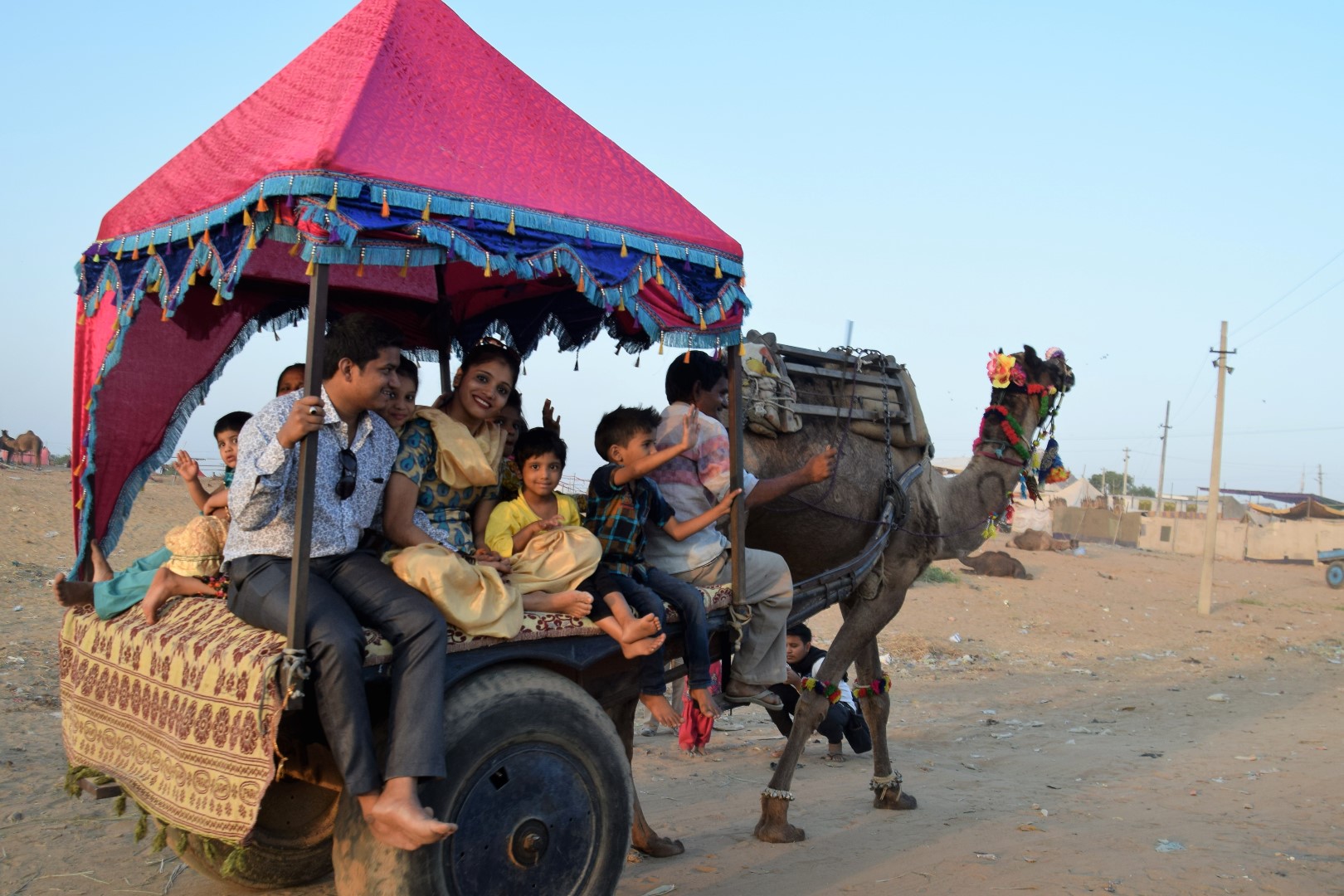 The fairgrounds are situated on the edge of town, and people, many of whom are from the various Rajasthani tribes, and their animals start arriving a few days before the actual start of the festival. Over the course of the fest, there are camel, horse and donkey races, cricket matches, tug-of-war and other games, mustache competitions, Ferris wheels, open air theaters, and camel cart and camel rides. 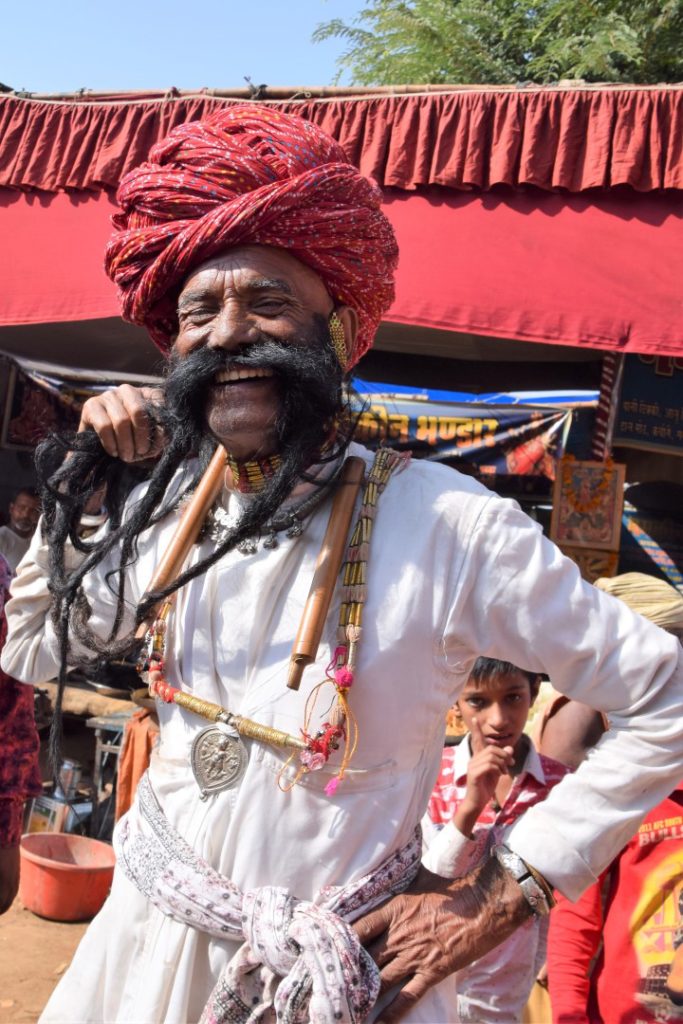 The winner of the mustache contest, this gentleman’s mustache reaches the ground.

As we walked the festival grounds, we did our best to stave off persistent vendors, but succumbed to some inexpensive trinkets or two in spite of ourselves. It seems everyone, both Indian and international visitors, has their cell cameras out, snapping evidence of the mela and people are happy to pose for photos. 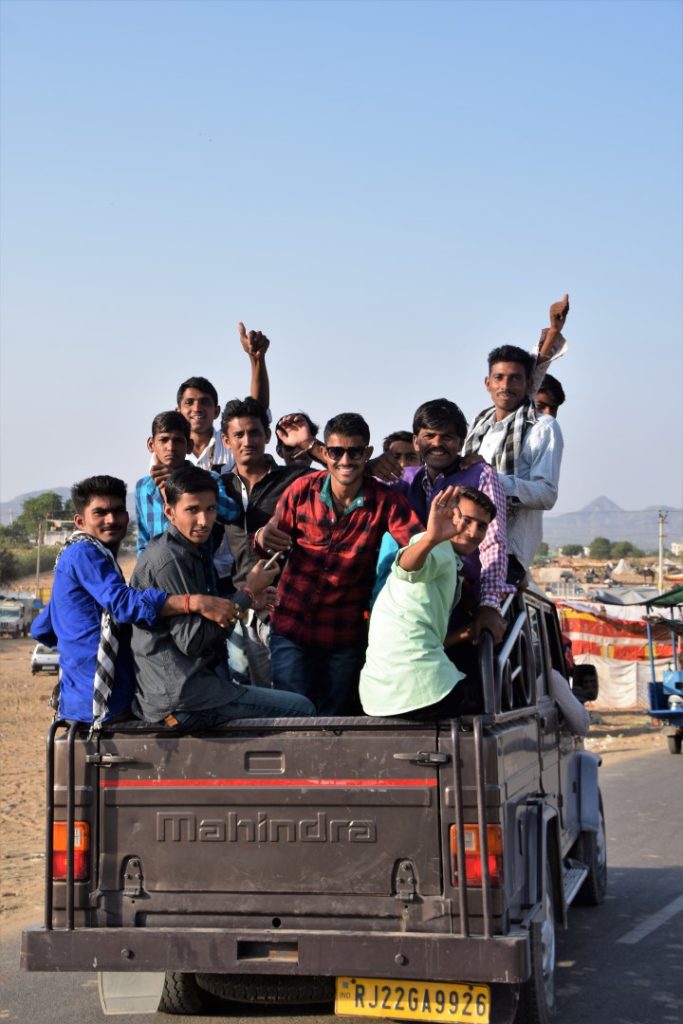 A fair atmosphere of celebration and joy

As is so often the case in India, all of life is here. Step carefully around cars, trucks, motorcycles, camel carts full of families laughing and waving, riders on camelback, roaming cows and bulls—as well as manure, of course. The festival grounds are dry and can be dusty. Camels drink from the same water troughs where people may be washing their feet. There’s a depressing amount of garbage on the fringe of the fairgrounds. Many Indian attendees are traveling in three-generation groups and there’s joy in those groups. Conversations and laughter is spirited. It all washes over you. 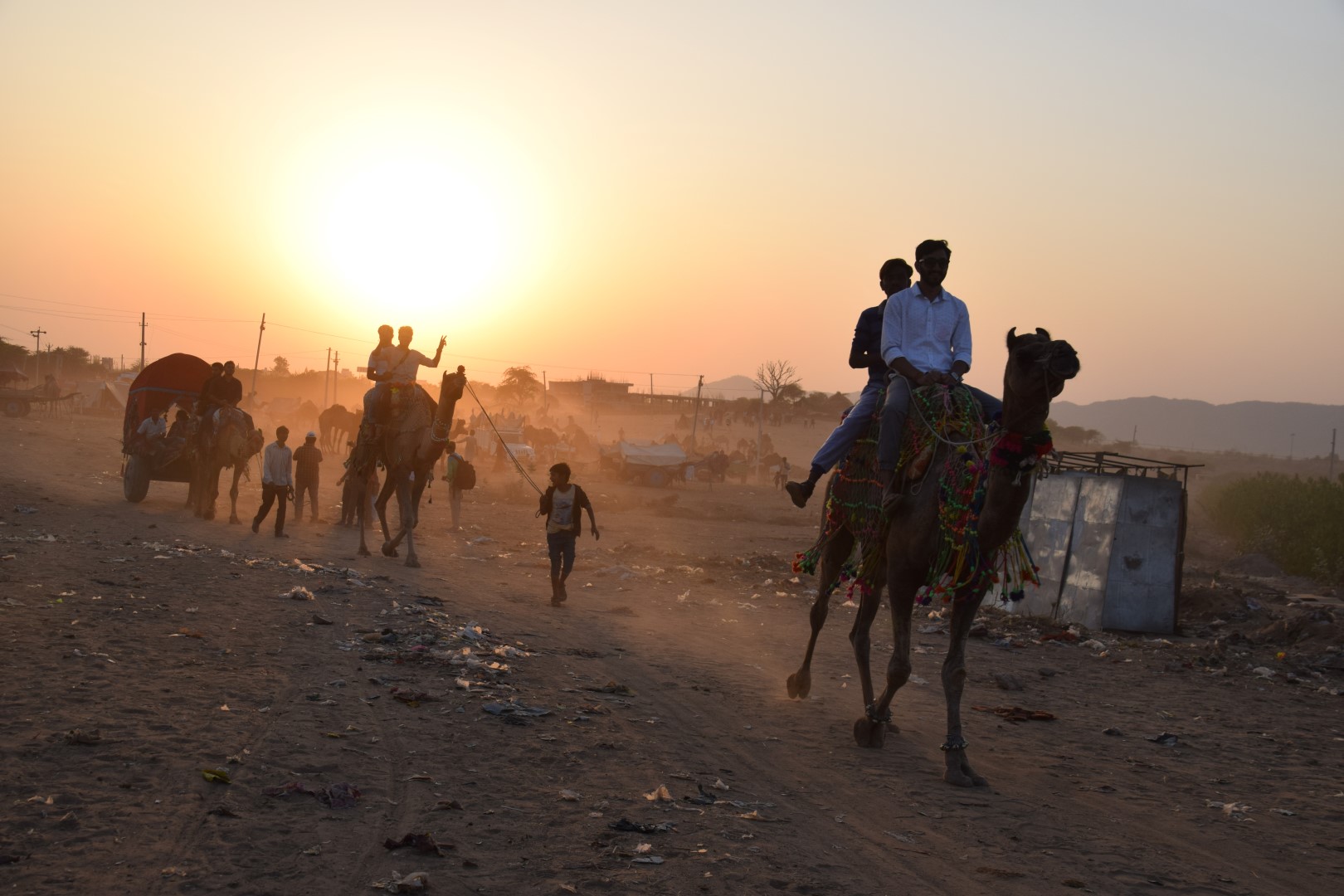 Sunset at the fair

A good camel sells for about $400.00, but a good Marwari horse can sell for much more. Marwari horses are beautiful animals with distinctive leaf-shaped, inward turning ears. They come in all colors. The most distinctive are the white horses, with their unique, prized pink-hued faces. For you horse people, the horses stand at about 14 to 16 hands, and they’re a breed descended from Arabians.

We watched tense horse trading negotiations. A couple of men told us they had not sold a single horse, although they’d bought a few. Earlier in the day, we spoke with a couple of women in good spirits because they’d sold all of the camels they’d brought. They bought some new ones as well, which they would take to another market to sell. In front of a tent advertising Marwari horse stud services, a handler paraded a proud, rammy Marwari male horse around to prove his prowess. 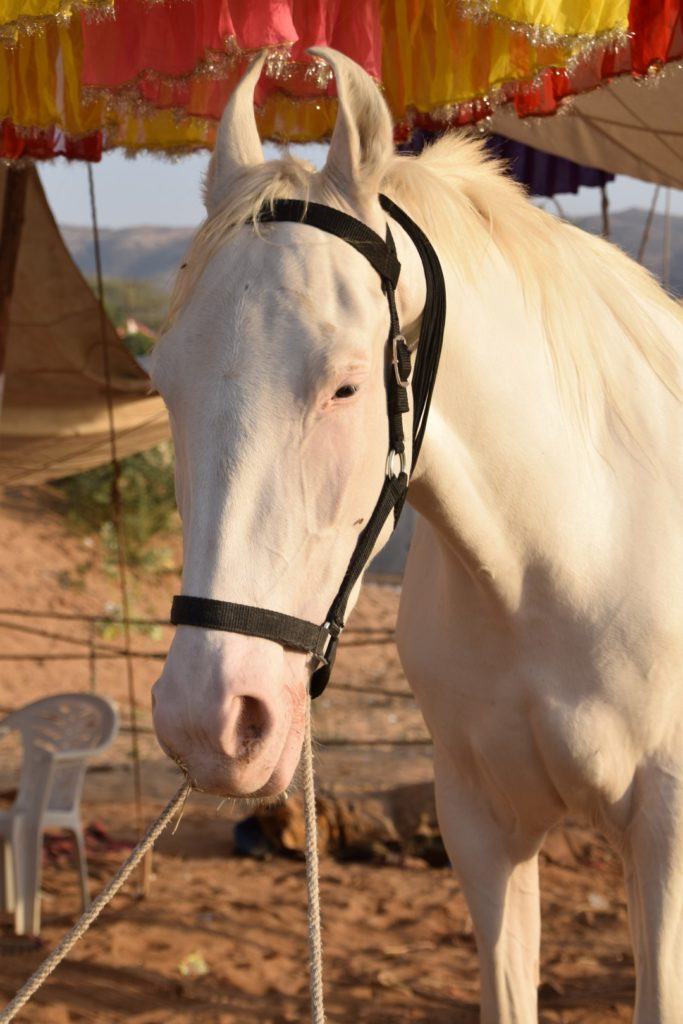 The Town of Pushkar: Temples, Markets and More

Wandering the fairgrounds is a must, but do go into town and wander the labyrinth of (mostly) car-free streets. If you visit the city during the festival it can be difficult to see that the rest of the year, this is a quiet sacred Hindu city. There are more than 500 temples in Pushkar, many at the lakefront (some do restrict access to non-Hindus) You can see people bathing at the ghats and performing religious ceremonies, pujas, there just as in Varanasi. The city’s most famous temple is the Brahma Temple, from the 14th century. This is one of only a handful of temples dedicated to Lord Brahma. 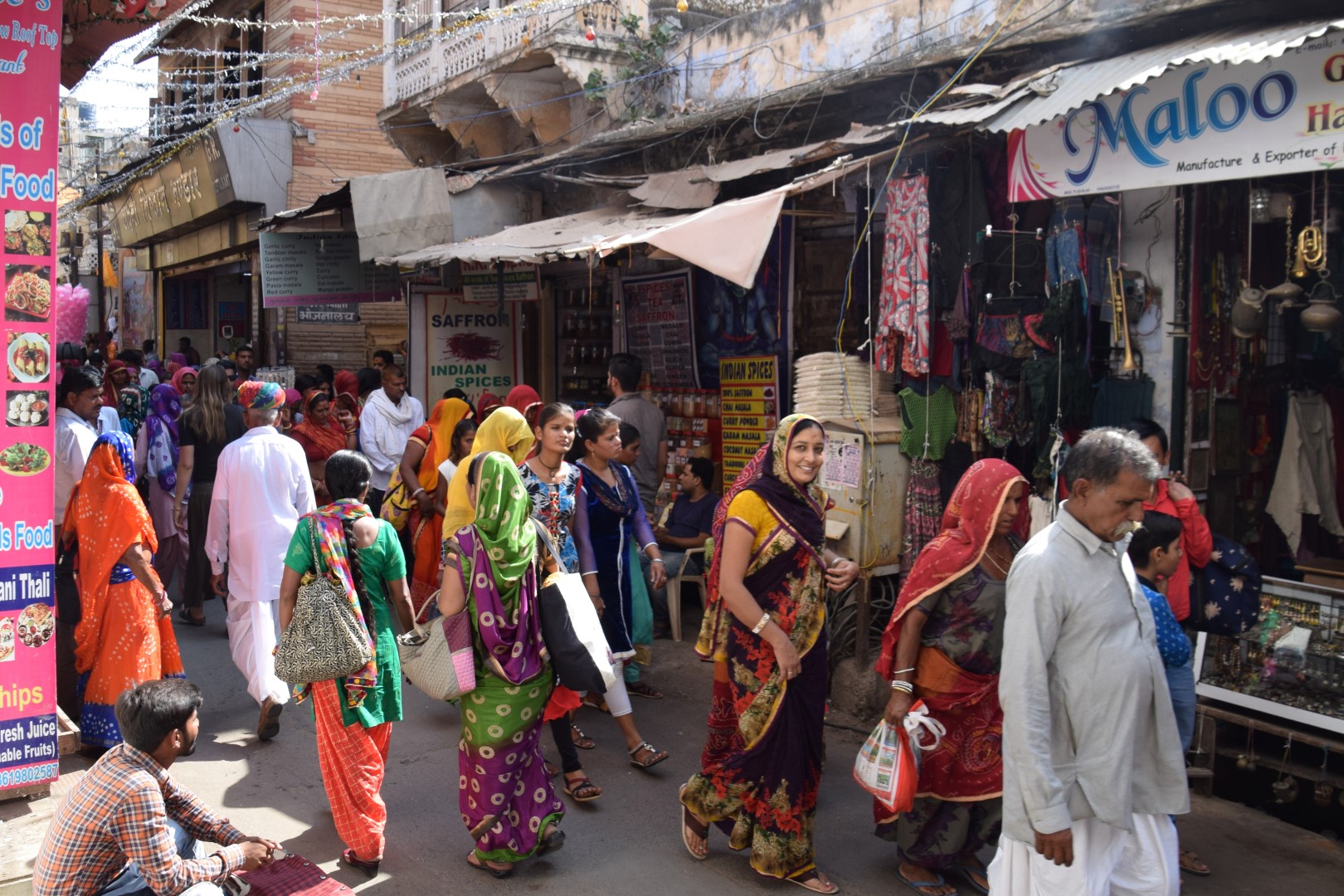 Wander the streets of Pushkar

During the festival, shops are fully staffed and we found some great shopping in clothes, silver jewelry and textiles. Just as at the fest, there are some tempting street food options. 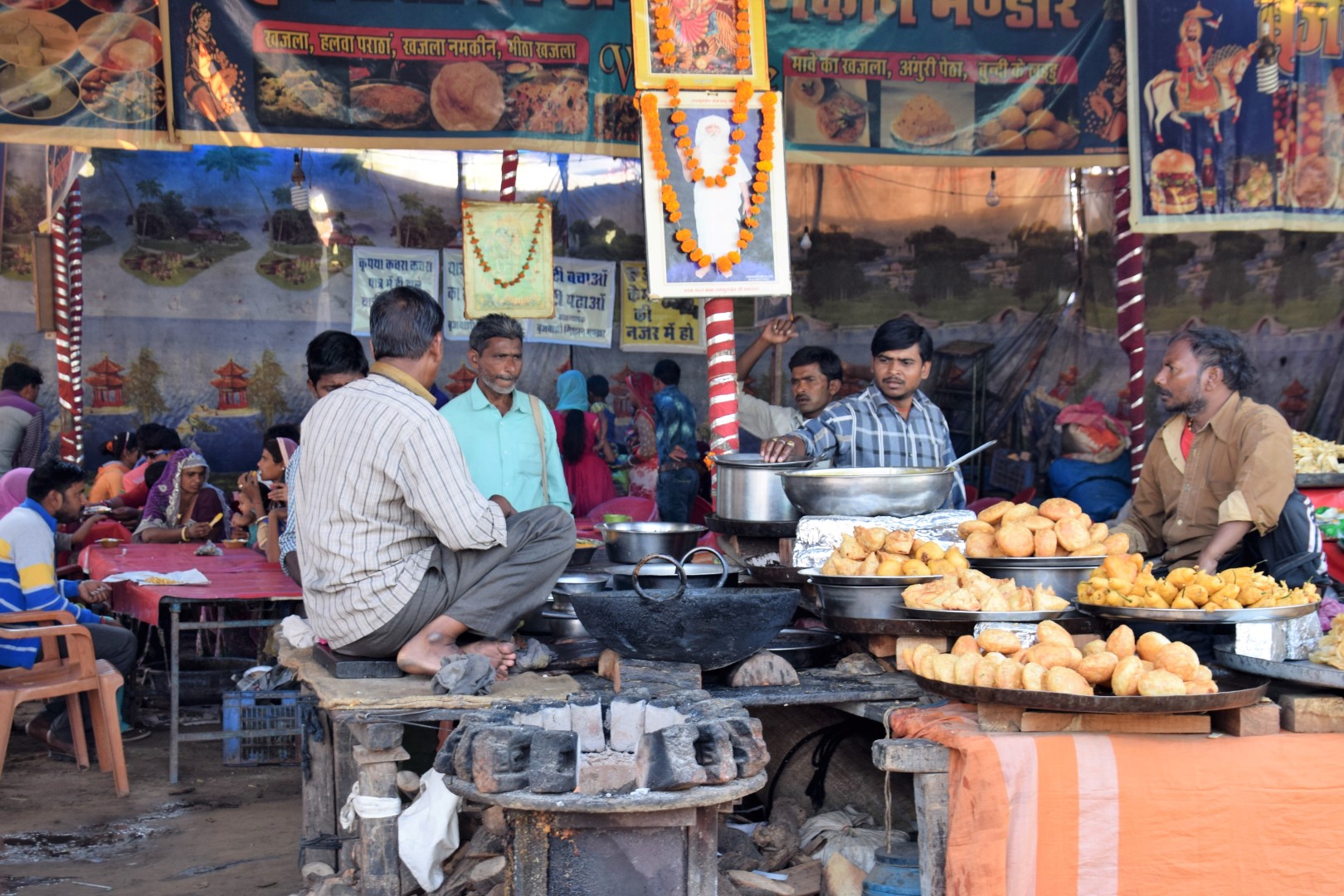 For a panoramic view of the city and fair grounds, walk the 200 steps up or take a gondola ride up Ratnagiri hill to Savitri Temple, a popular pilgrimage site. We caught the sunset and hung out with the Langur monkeys. You can take the gondola back down or take the steps. (I recommend the stairs because the views going down are lovely.) 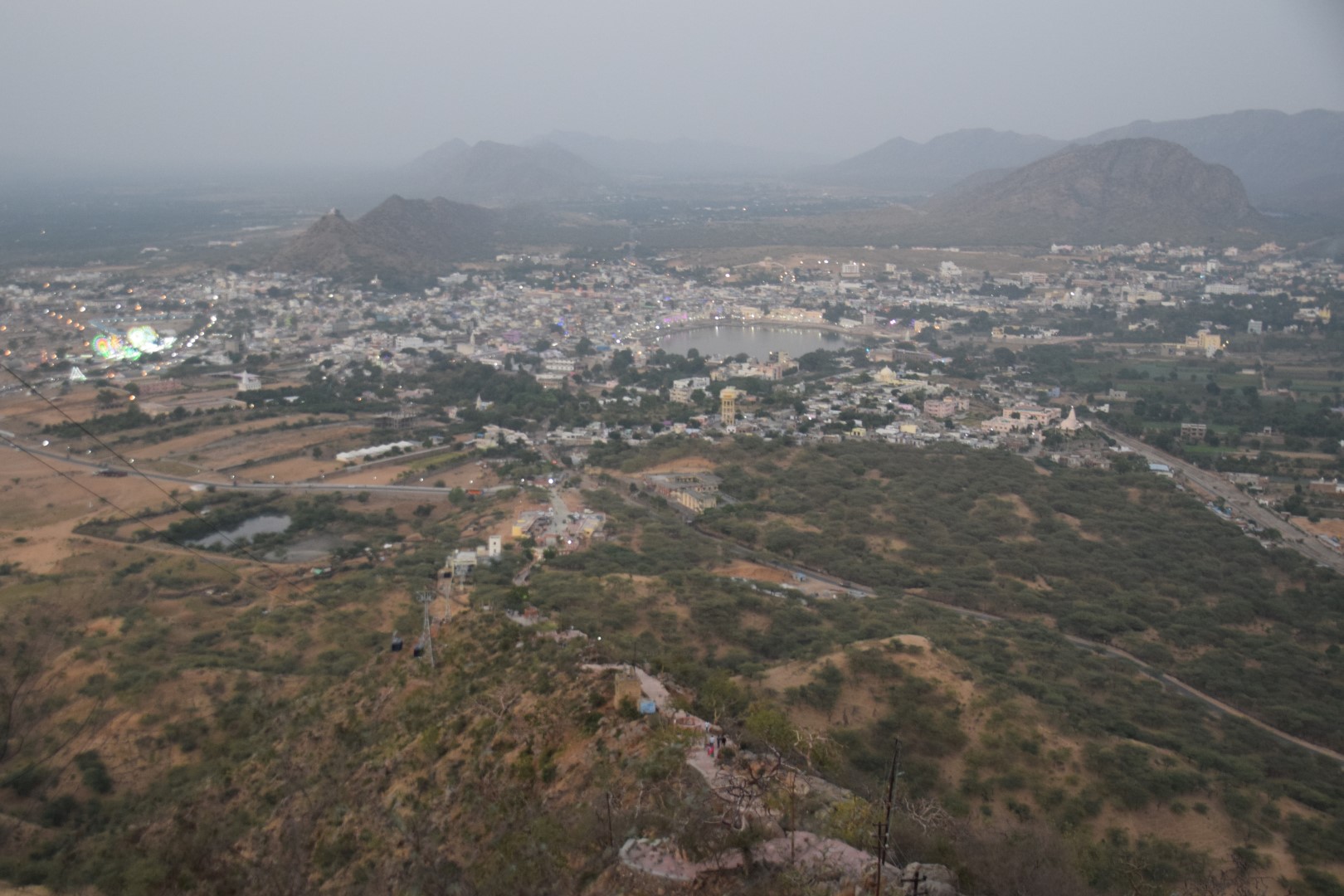 Our Camp: Definitely Not Roughing It

The city’s hotels fill each year, and tents around the festival grounds are plentiful, especially for those with livestock. 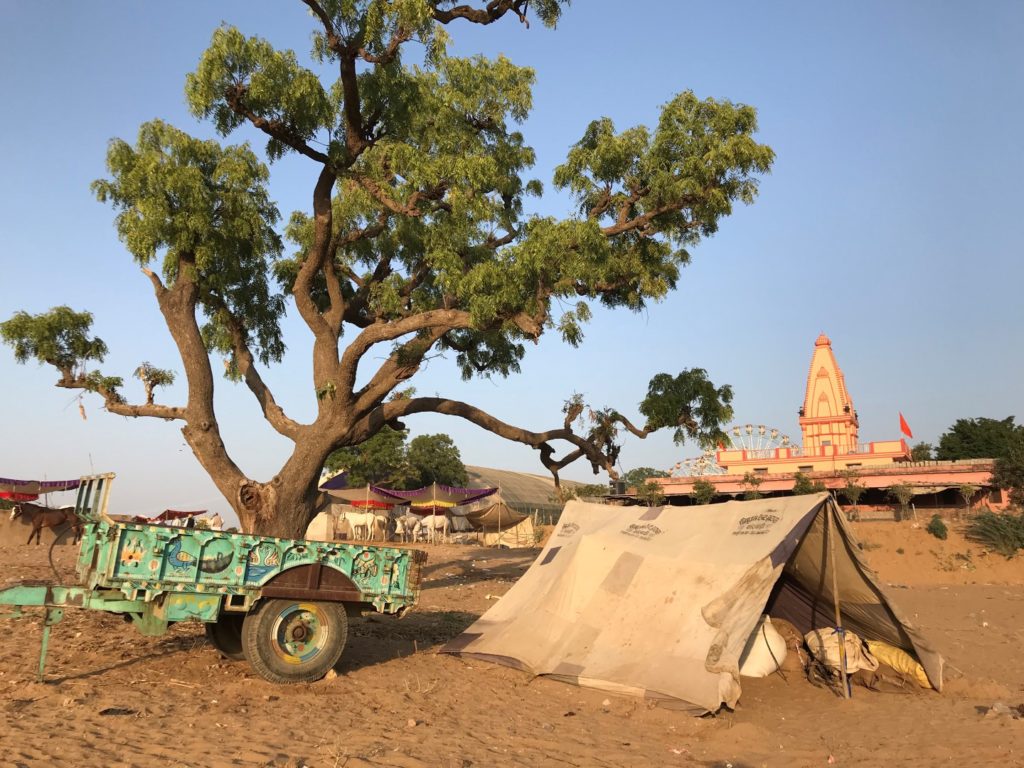 For visitors, a hotel alternative is to opt for one of the temporary camps that sprout up each year. 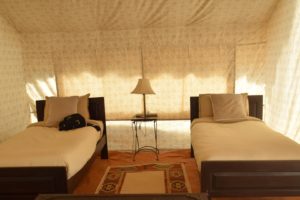 Our camp, run by Aagman India, offered private, room-sized tents, simply furnished with a bed or two, a couple of chairs and tables, and a trunk with a padlock for securing valuables. A smaller adjoining tent was outfitted with a flush toilet, sink and shower. There were designated time for electricity and hot water. The tents were very similar to the one I stayed in the Sahara desert.

We had our meals in the dining tent. The food was traditional and simple; the kind of vegetarian meals you might find in many Indian homes. There were plenty of fresh fruits, vegetables and baked goods. A really good espresso machine and capable barista was a luxury item and one of the few times I deviated from enjoying chai on the trip.

Before dinner, we gathered around a camp fire for entertainment by musicians, dancers, acrobats, and fire-eaters. Dancers performed in full, swishing tribal skirts and flaming crockery pots on their heads. Another dancer stacked two, then four glasses on his head and then again, another flaming pot. A man walked on knives and then blocks of nails. This was followed by a fire performer, passing a flaming torch over his skin and then for a finale, exhaling long gushes of fire. (Yes, it’s “for the tourists,” but they were impressive.) 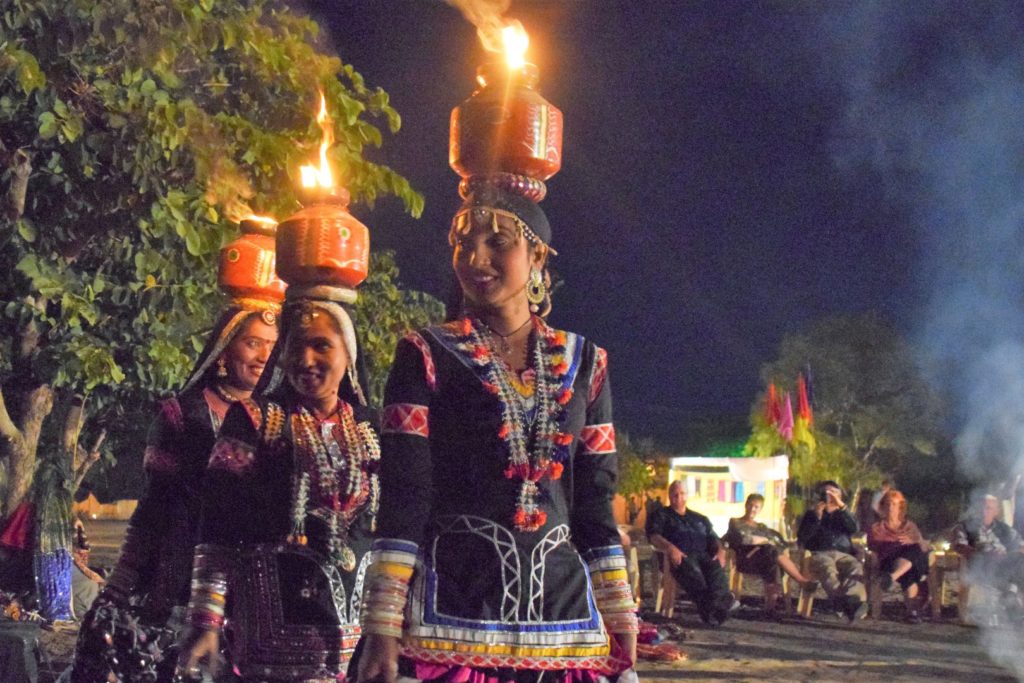 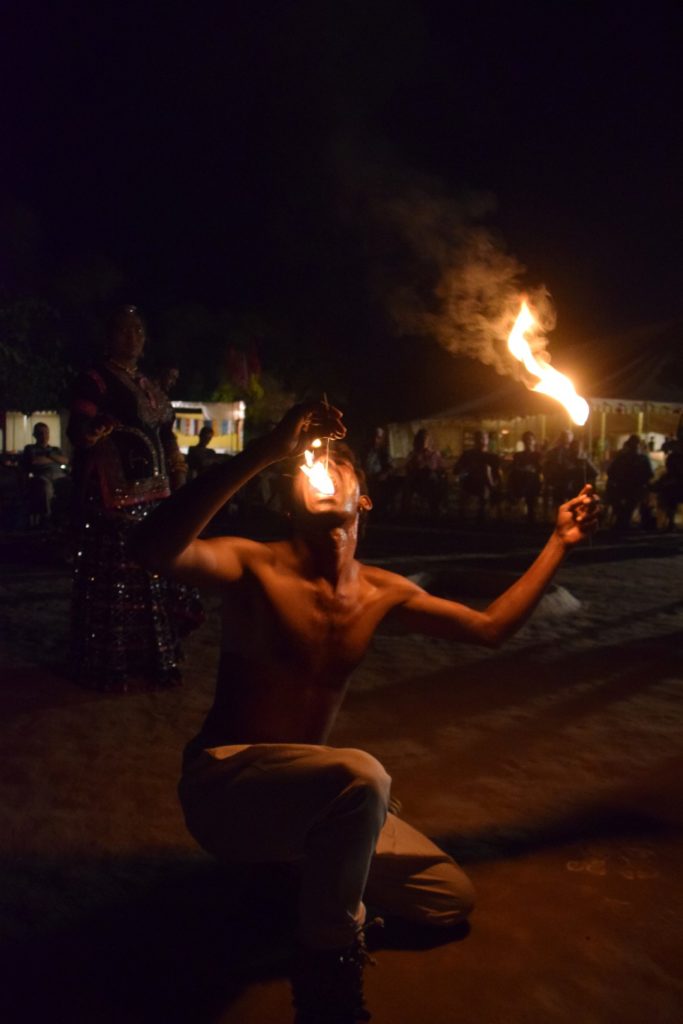 To me, at home or away, attending festivals is one of the best ways to get a glimpse into a people and a culture. The energy, people-watching, small chance encounters and conversations, the food, and the purpose of the festival  are invaluable experiences, as well as great fun.

It wasn’t lost on me that Pushkar’s Camel Fair is similar to state or county fairs at home. Travel does many things—not the least show you that people are the same everywhere.

If you’re planning a trip to India, do plan on attending this, or one of the many other annual festivals and fairs held throughout India. 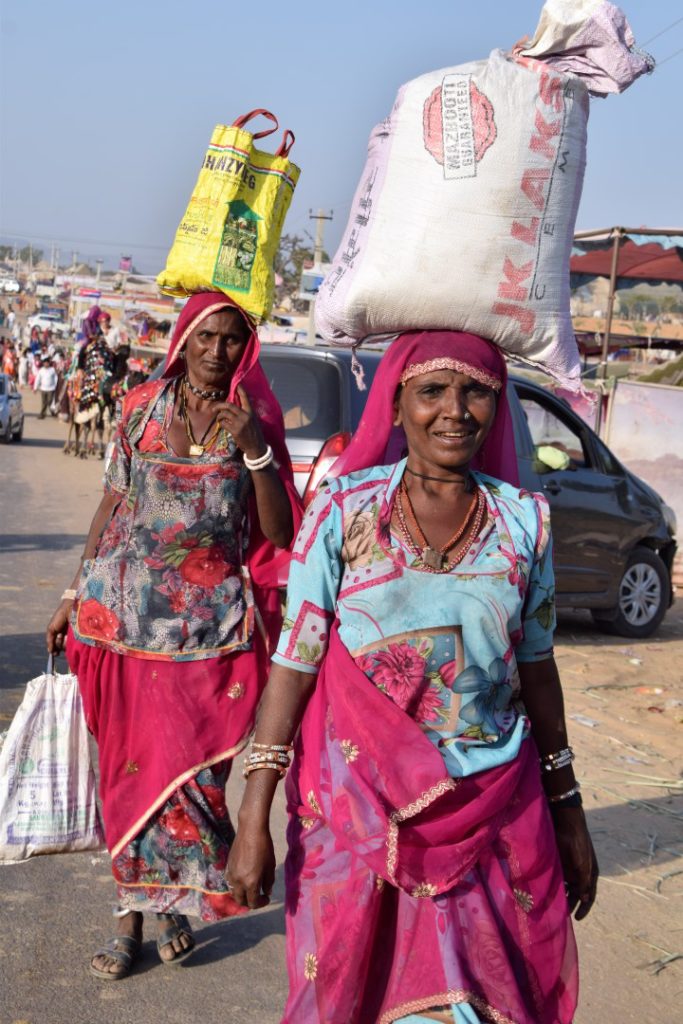 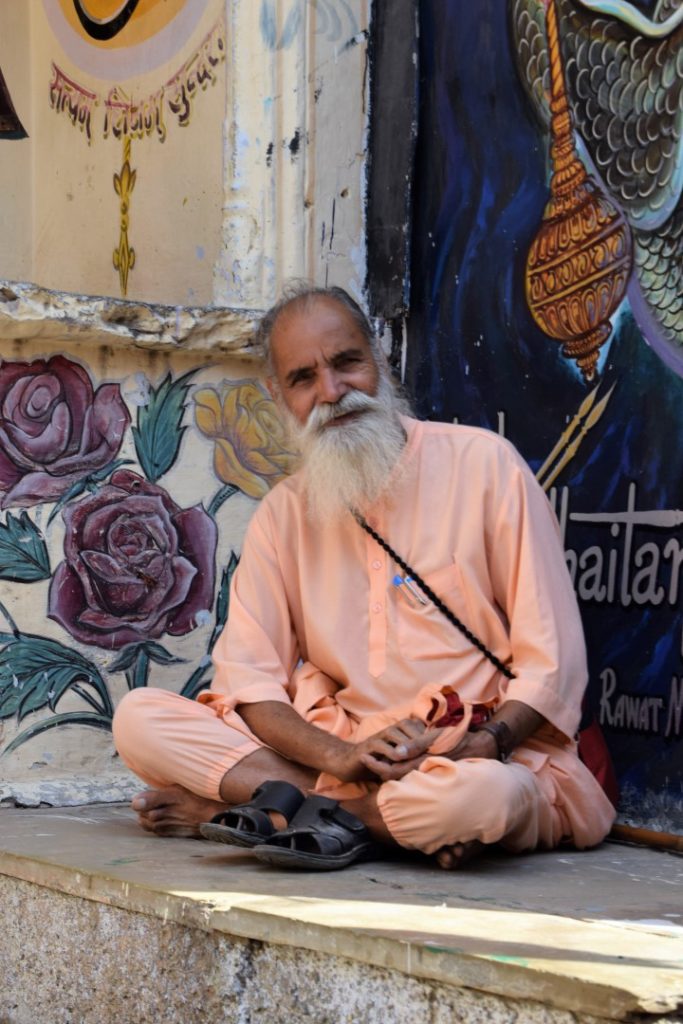 Nancy, Fabulous article. Sounds like so much fun. I loved the pictures too! This may need to go on my bucket list.

Thanks, Candi! It’s a fabulous experience. The whole trip was truly wonderful. India is a very special place, and I hope to return to see more of it!

Thanks for your kind words, Mero. Happy travels!