The Ponies of Chincoteague: A Delightful Adventure 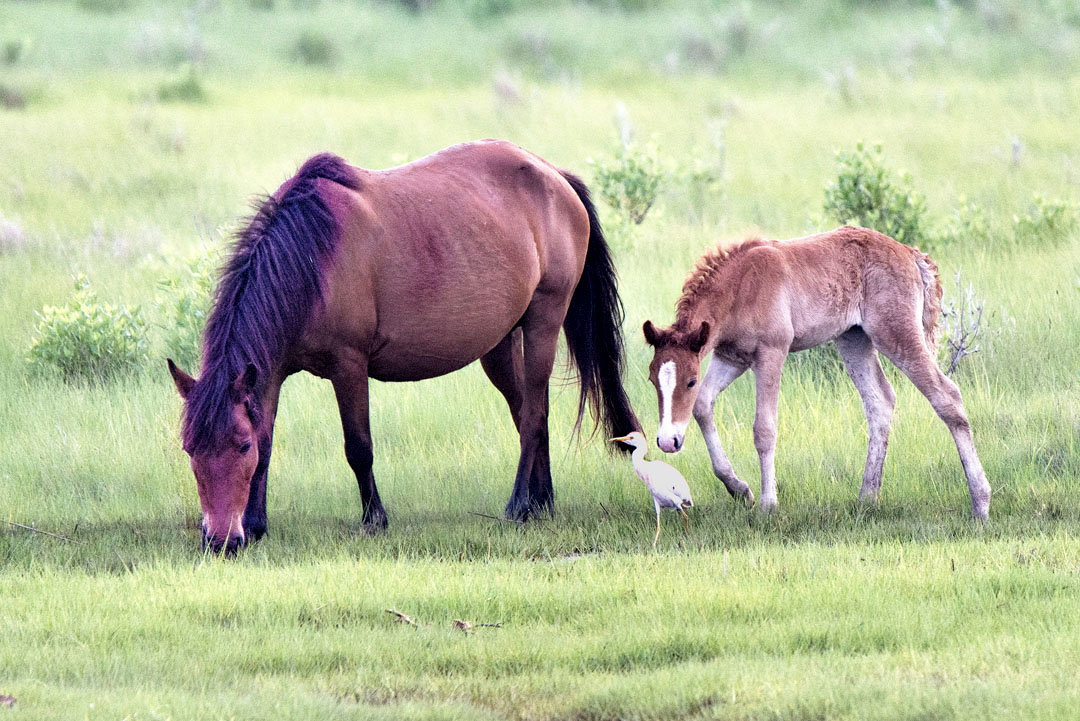 The word, “Chincoteague,” brings back a wonderful childhood memory of the book, Misty of Chincoteague by Marguerite Henry published in 1947.  Misty is born to a pony from Assateague Island, an island across a small body of water from the island and town of Chincoteague. The story has remained with me, and some sixty years later, my dream to visit Chincoteague and see the ponies of Chincoteague for myself came true. 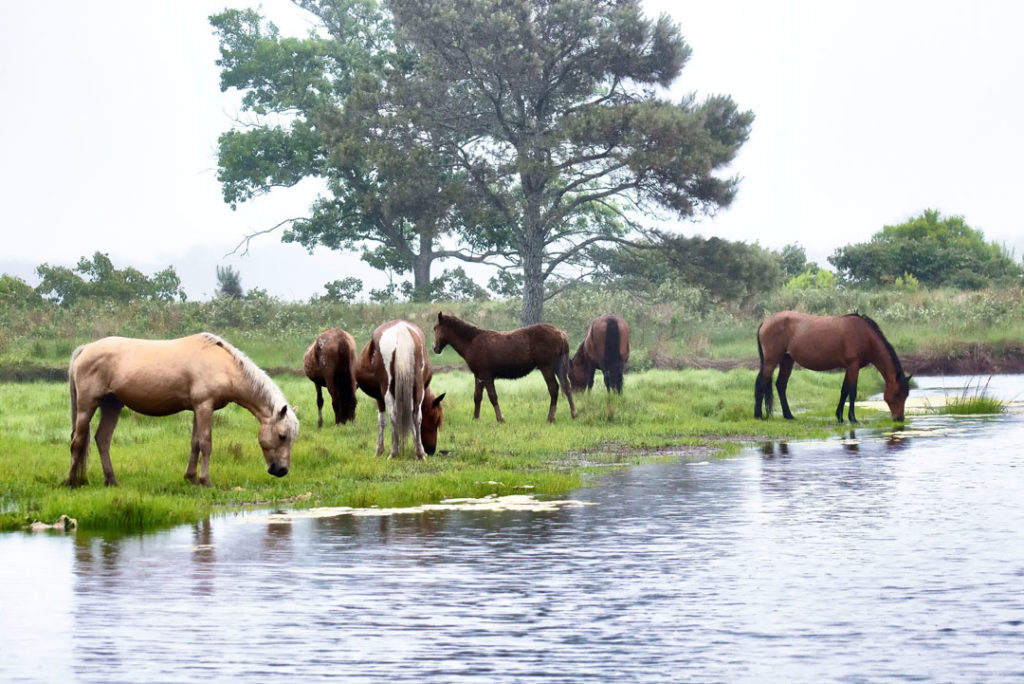 Home of the Ponies of Chincoteague 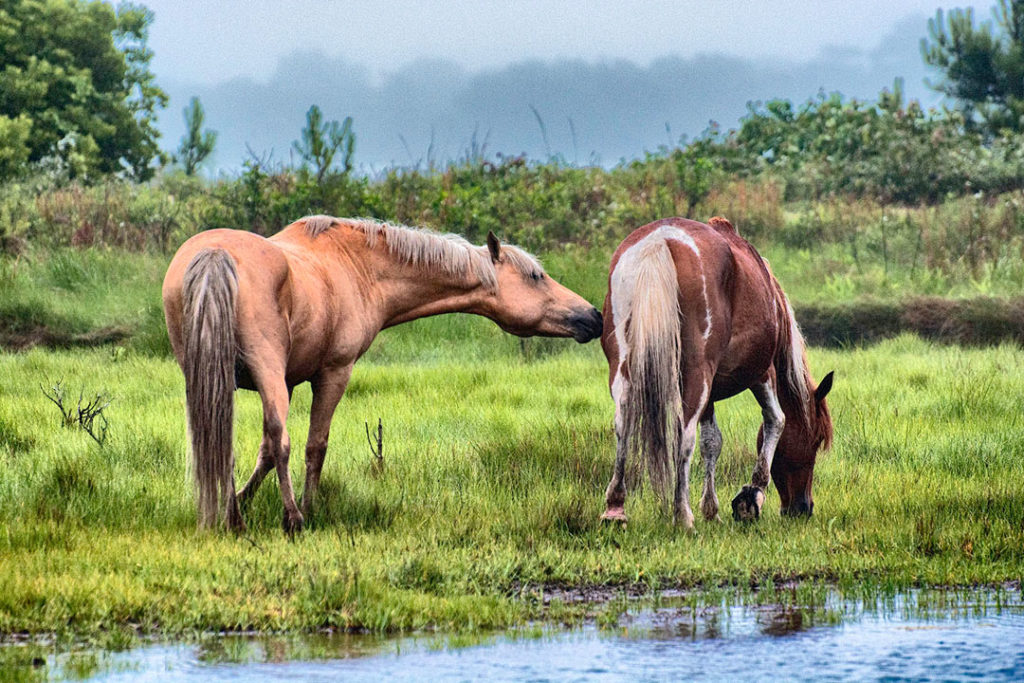 History of the Ponies

There have been ponies on Assateague Island dating back to the late 1600. Today, the ponies roam in the Chincoteague National Wildlife Refuge on the island. The permit allowing the ponies to graze in the Refuge limits the number to 150. They run wild in bands except for once a year on Pony Penning Day when the ponies are herded across the water to the island of Chincoteague. They are corralled and checked for any medical needs and inoculated. Some are auctioned to pay for the costs of maintaining them and to keep the number within the allowed limits. Pony Penning Day is a big event drawing many tourists.

Origin of the Ponies

The origin of the ponies is unknown. Some say they are descendants of ponies that swam ashore from a wrecked Spanish Galleon. This is not too likely. More likely is they are descendants from feral horses pastured on the island by settlers. My mother’s father’s family settled on the mainland, directly across from Chincoteague in 1660. The settlers grazed their horses and cattle on the island, and it is fun to think of the ponies as descendants from some of my family’s horses. 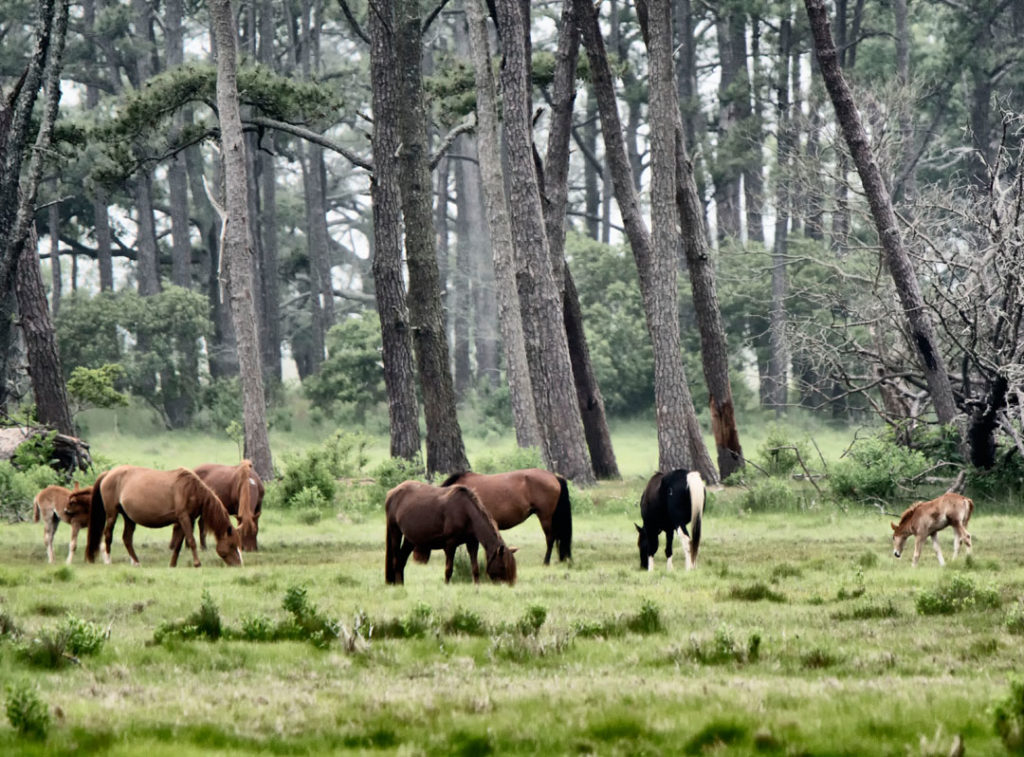 A Quest to Find the Ponies: Time and Patience Are Required

There is one road from the town and island of Chincoteague that crosses the causeway, and it extends to the eastern shore. That road is the only opportunity to see the ponies from a vehicle. The other ways are by hiking the trails and    from a boat, and there are many boat tours. We made reservations for a boat tour prior to departure from Oregon because we wanted the early light for photographing.

We arrived in Chincoteague late in the evening. The next morning, the phone rang very early, and it was Captain Dan’s boat tour company. The caller said, “Everyone on the morning boat tour around the island had cancelled. It is raining very hard. Do you want to cancel?” My response, “We are from Oregon and rain has never bothered us.” Having brought rain clothing and rain covers for our camera gear, we met Captain Dan at the boat. Off we went, speeding into the wind and rain. The rain stung my face! It was almost intolerable. Water was pouring off me similar to rain flowing off a roof, and the seats were wet! But we were dry under our rain clothing and were able to photograph with the camera waterproof cover. 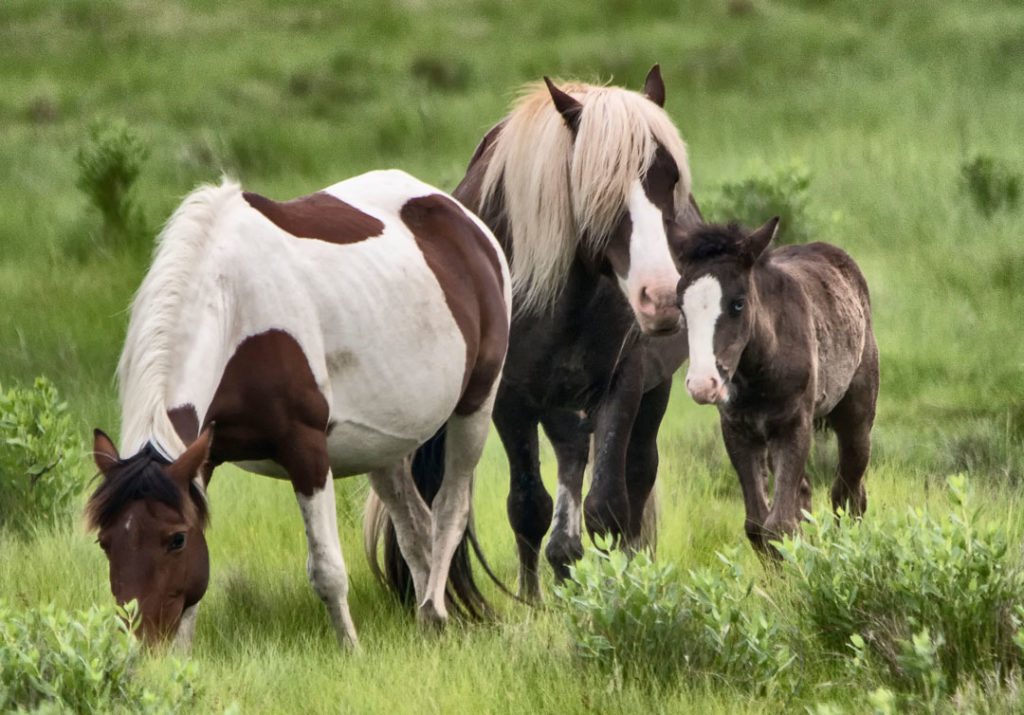 At least 20 minutes after departure, the boat slowed to almost a crawl, and it passed through beautiful tall green sea grass. Then, on a narrow waterway, it passed though low trees and rounded a bend. There ahead of us was a band of ponies not more than 25 feet from the shoreline. Captain Dan kept the boat turned so we could photograph the ponies.

We continued our journey around the Assateague Island, and it continued to pour rain. We could see another band of ponies some distance away.  That was the end of the pony sightings, but we saw the lighthouse and a dolphin playing in the water. 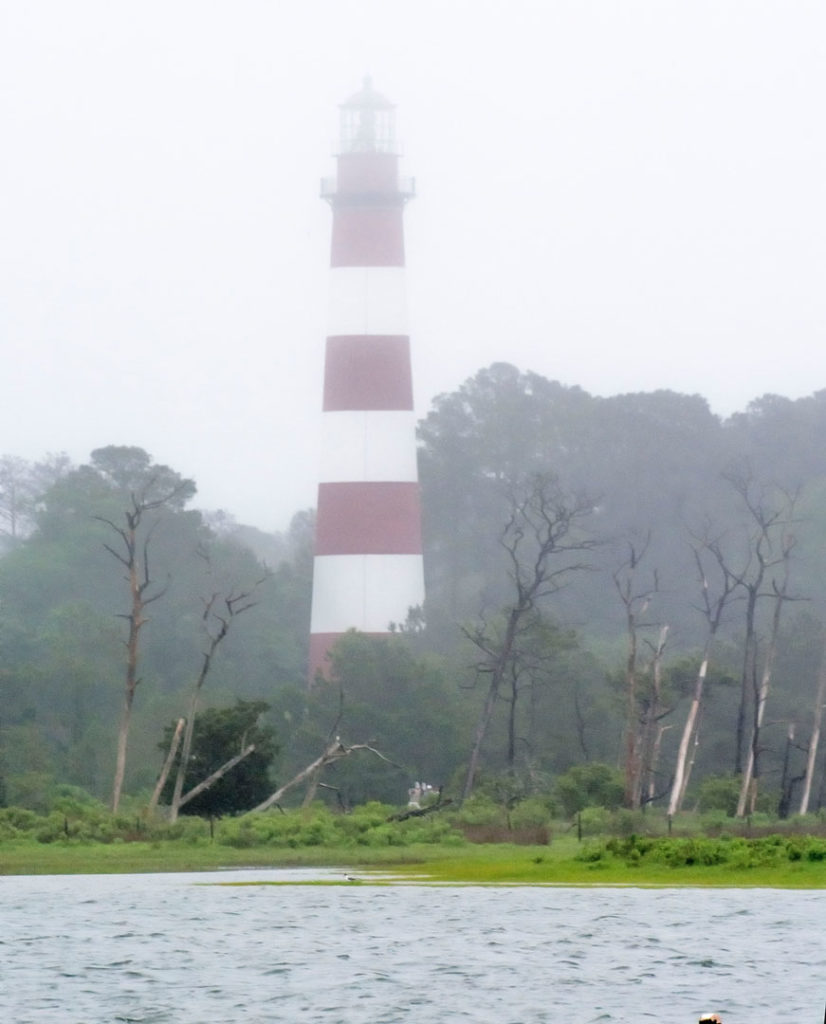 The next day we saw ponies from the road, but probably a half mile away.  It was on to another adventure! We found a very large number of white egrets and other birds along a stream that runs parallel to the road. It captured our interest and occupied several hours. The birds were very active and some were fishing. It was delightful to watch and photograph them.

What a wonderful surprise! On our way back to the city, we spotted the ponies less than 100 feet from the road. They were eating and drinking water. It was probably the water that attracted them. We photographed until dark. 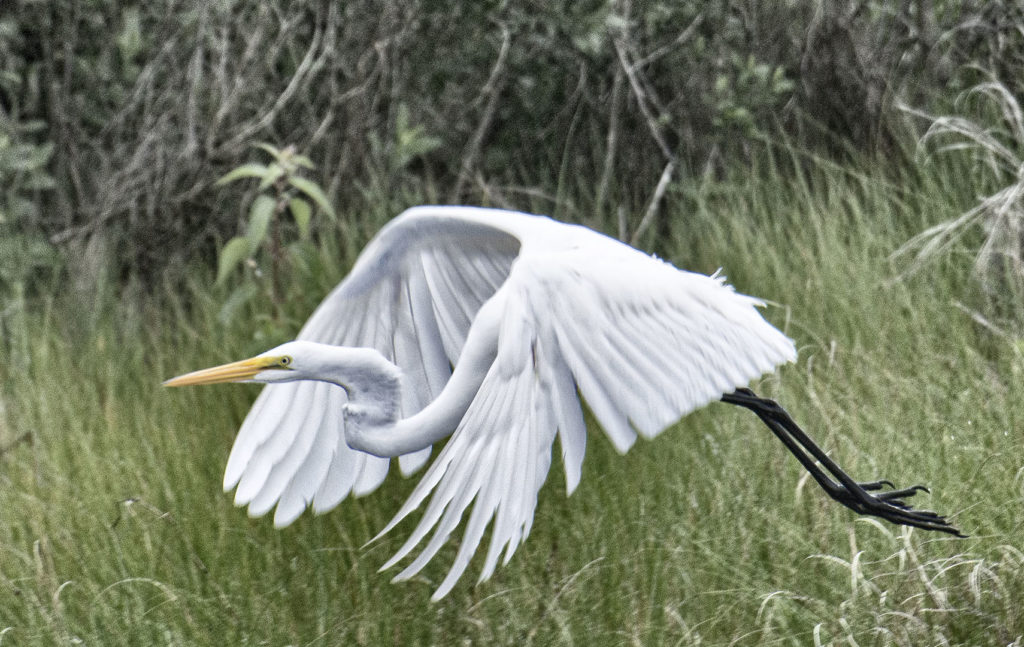 Many Reasons to Visit Chincoteague: Other Opportunities

There are many reasons to visit Chincoteague. There are many unique opportunities. The Chincoteague National Wildlife Refuge is 14,000 acres in size. It is composed of sand dunes, marshes and a maritime forest and is home to an abundance of wildlife. The wildlife include more than 320 species of birds, mammals, and the ponies. The mammals include: white-tailed deer, sika deer, fox, raccoons, otter, possum, muskrat, shrew and Delmarva fox squirrels as well as dolphin in the surrounding water.

Assateague Island offers recreational opportunities including: boating in permitted areas; bicycling on identified trails; fishing, clamming and crabbing in permitted areas subject to required licenses and limits imposed by law; swimming; and, horseback riding in designated areas. Note: camping, pets and drinking alcohol is prohibited. It goes without saying that the animals cannot be pestered and plant material cannot be removed. Boats, canoes and bicycles can be rented. 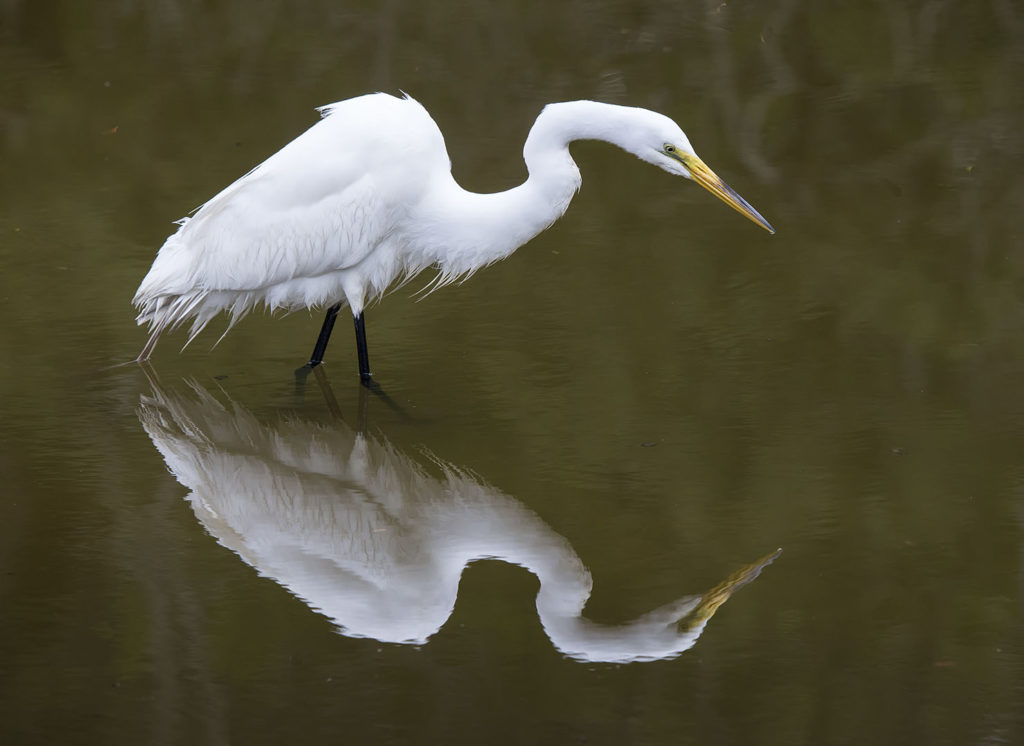 The Town of Chincoteague

Chincoteague is a delightful town with restaurants that serve delicious seafood. There are hotels, motels, bed and breakfast homes and RV parks. There are boat and bicycle rentals and water and land tour companies. The boat tours are wonderful because it is an opportunity to see the ponies and the marine life. 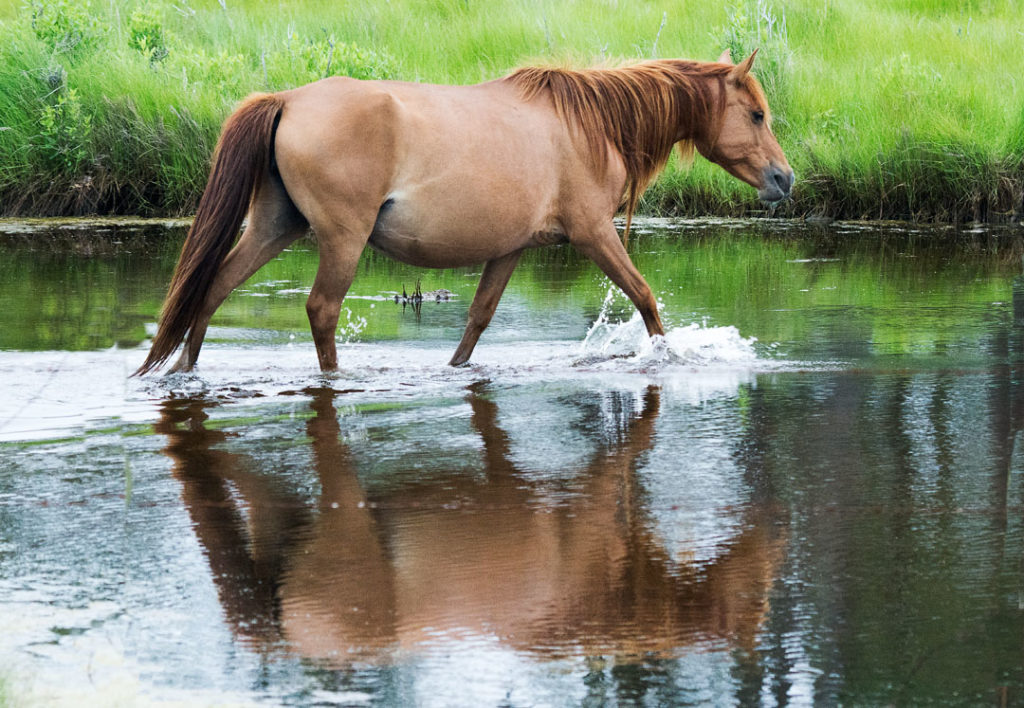 This adventure started in Philadelphia. A delightful way to see the City is to ride the sightseeing bus called the Philly PHLASH. It is very inexpensive and free for seniors.  It runs every 15 minutes and travels a downtown loop which provides access to 20 stops located near famous attractions, museums and historic sites. The public transit service is managed by Independence Visitor Center Corporation.  (Note: PHLASH runs on a different schedule in the off season.) 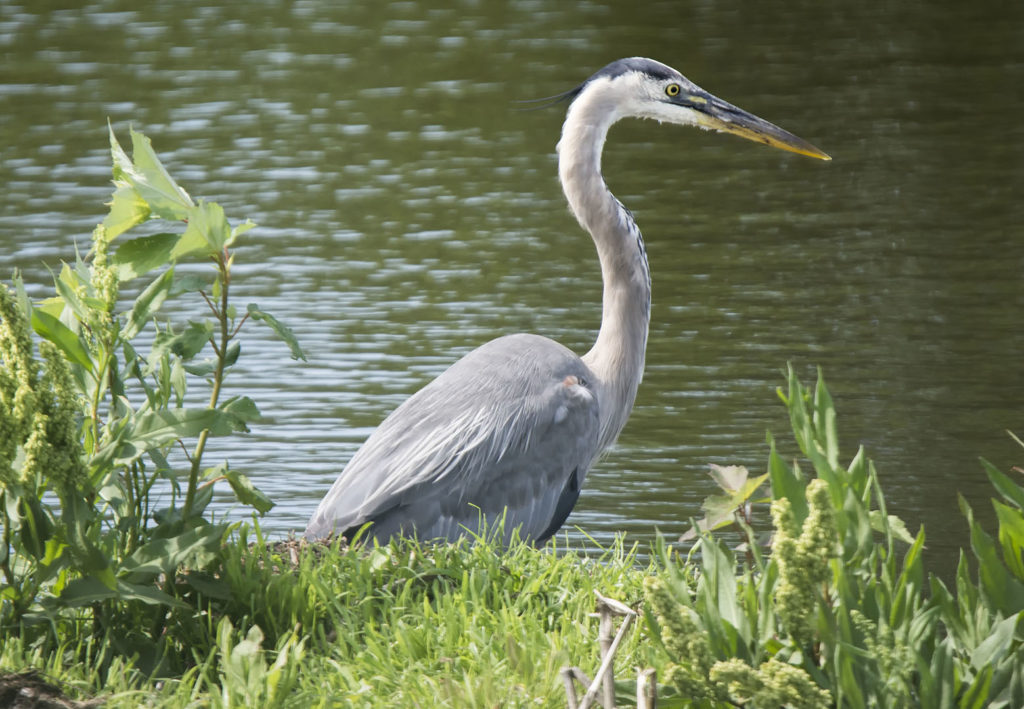 Upon leaving Chincoteague we headed north to the Bombay Hook National Wildlife Refuge located in eastern Delaware. It was a delightful stop. 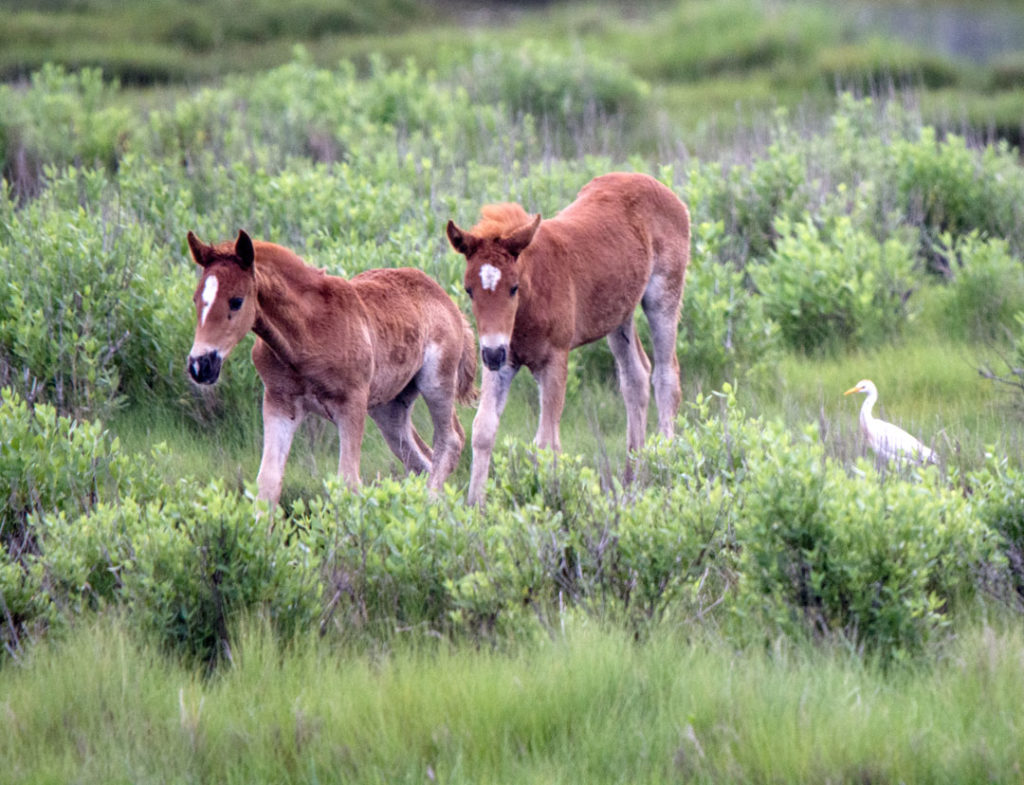 Our next destination was Lancaster, Pennsylvania. We arrived on a beautiful day. This was a special treat. The countryside is absolutely beautiful. It is hilly. The hilltops are wooded and the hillsides are green with crops. Country lanes traverse the countryside. Some are tree lined. The farms are impressive and the homes enormous. The architecture of some homes is fascinating. The gardens and yards are lush with colorful flowers. Everything is manicured. It is truly beautiful. 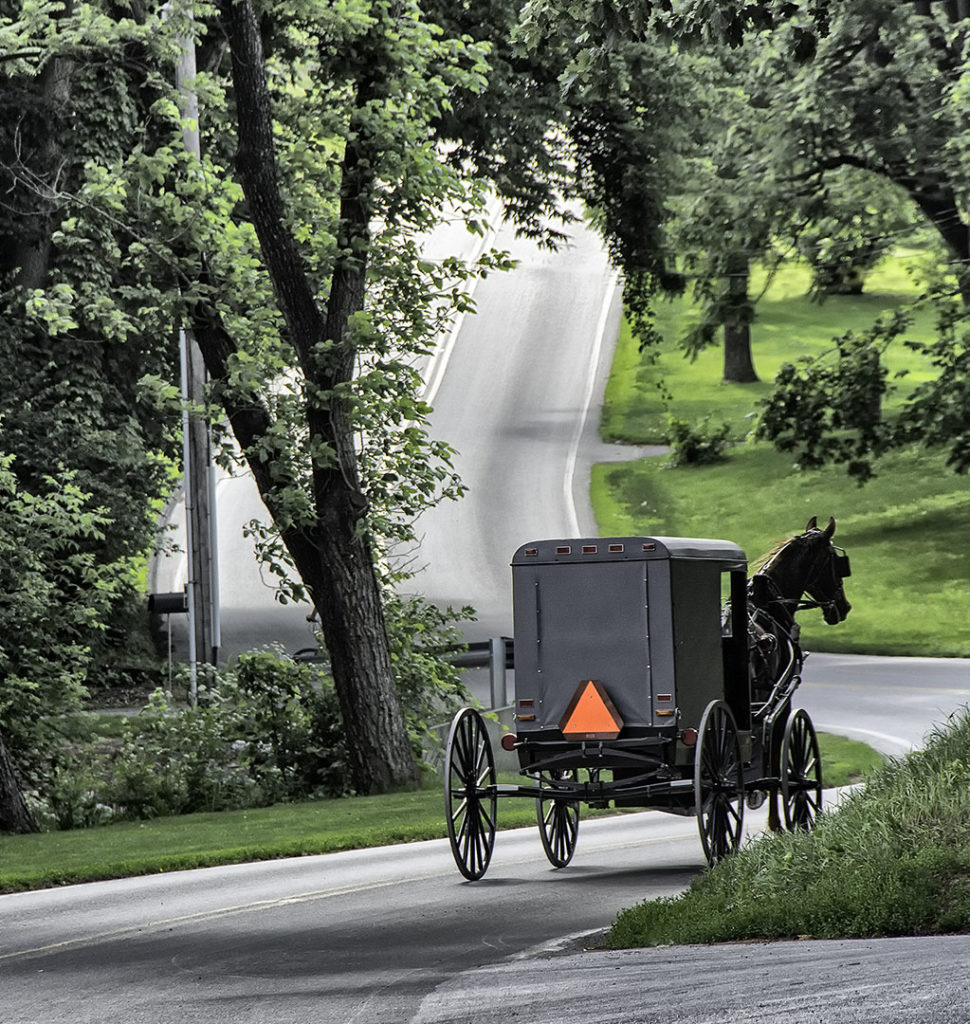 Everywhere we went, we saw the Amish in their buggy pulled by a horse. While eating dinner outside at the Clarion Inn in Strasburg, the sun was going down. The silhouette of the buggies against the setting sun was absolutely beautiful. The next day we saw buggies traveling through covered bridges and tree-lined roads. Yes, we respectfully snuck a few photos. 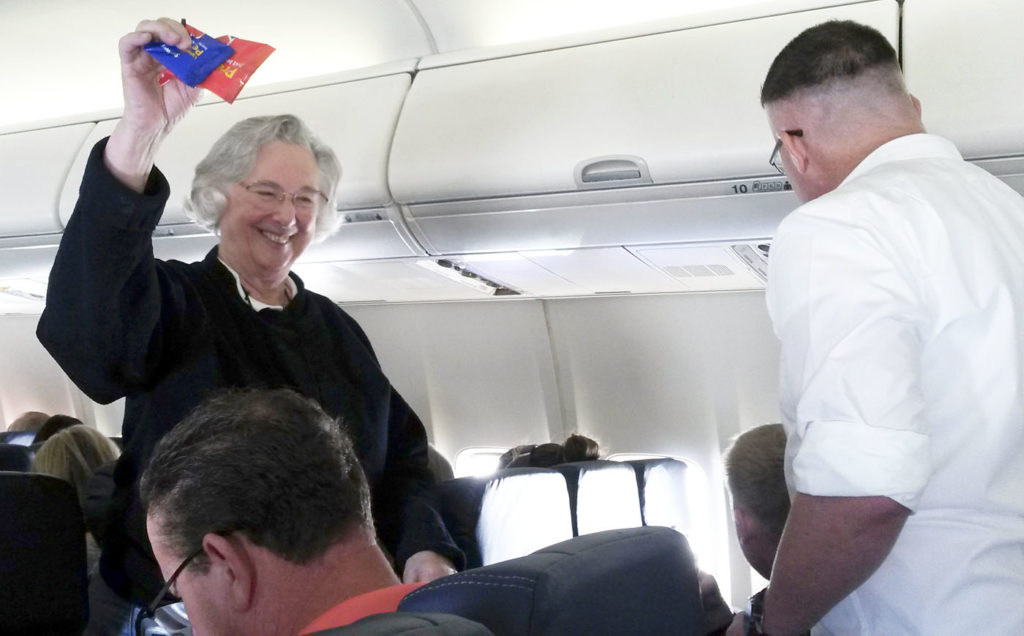 Writer and photographer Adrianne Brockman makes the most of every trip.

– All photos by Adrianne Brockman.

Adrianne Brockman is a retired land use planner and attorney. She is a very serious amateur photographer and has won many awards. Writing for pleasure is one of her passions. She has been blessed to travel and photograph in Africa, Asia, Canada, Europe including Iceland,  Mexico and in much of the U.S.A.

Oh my gosh… I have wanted to visit Chincoteague since I read Misty of Chincoteague as a young girl. We were able to purchase very reasonably priced books from our weekly reader. I always purchased anything related to horses and Misty was one of my favorites.

More than 25 years ago, my then young son announced: “Mom, I’d like to visit our nation’s capital over the 4th of July.” Okay, I thought and started to do some research (pre-Internet)… ordering brochures from the back of AAA magazine and calling Chambers of Commerce, etc.

Before I could finish planning the trip he suddenly changed his mind… when he found out the Smithsonian Museum Star Wars exhibit was already gone. The true motive revealed. LOL! I recall later thinking we were probably lucky it didn’t work out that year because we later learned that DC had a record-breaking heat wave over that holiday.

I have whitepapers for visiting that area that I’ve developed over the years. Your story has definitely re-inspired me to consider visiting in the not too distant future. Great article, Adrianne. Thank you for the inspiration!

Hi Susan, Another big fan of Marguerite Henry’s books here. I was so thrilled to be able to include Adrianne’s article on our site. I love her stories, and her photographs. (You’re a good storyteller yourself and I have to laugh at your son’s smart thinking for the chance to see that Star Wars exhibit!) So very glad you enjoyed and I really hope you make it out there to see the ponies for yourself! Thank you.