Why You Should Visit Bhutan 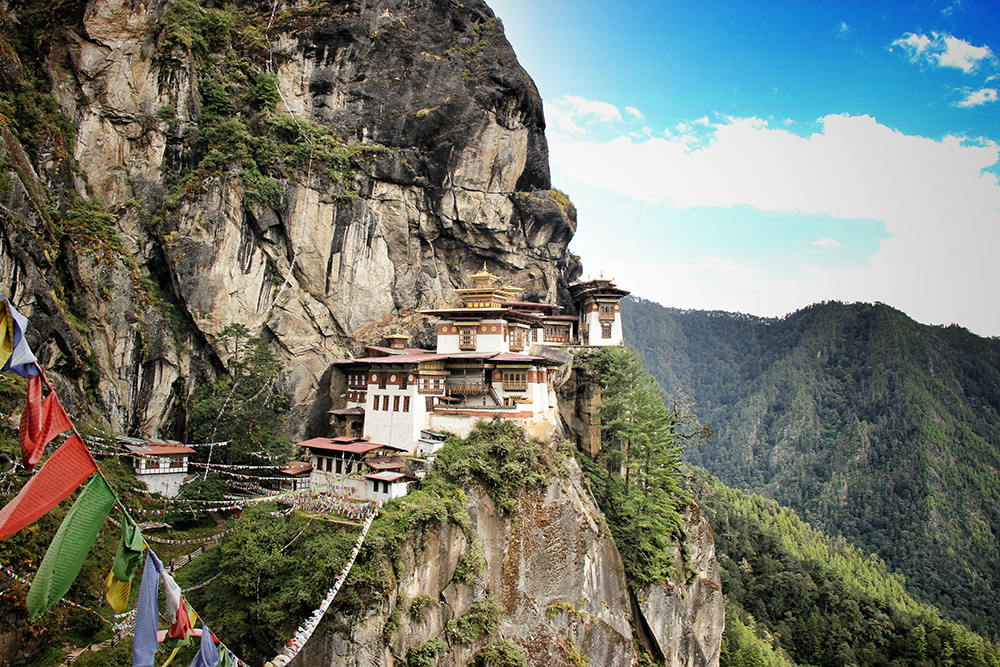 Bhutan is a small Himalayan Kingdom situated between China and India. It has a population of over 790,000 people. Bhutan is the only carbon negative country in the world, meaning it absorbs more carbon than it emits. And this is just one reason you should visit Bhutan. Bhutan was recently awarded the 2018 Earth Award at the International Tourism Bourse in Berlin, Germany in recognition of working towards developing sustainable and responsible tourism.

The concept of Gross National Happiness (GNH) resonated and created a buzz within the international community. Pioneered by The Fourth King of Bhutan, the philosophy highlights that the happiness of its people indicates the true progress of a nation rather than simply measuring its Gross Domestic Product. Since its inception, GNH has guided Bhutan’s developmental activities and policy formulation.

Here are the top attractions and experiences to look for during your trip to Bhutan.

Hike to the Tiger’s Nest

A trip to visit Bhutan is not complete without visiting the Taktsang Monastery, popularly known as the Tiger’s Nest. The monastery is perched on a cliff 900 meters above the Paro valley. It takes about a two hours hike to get to the monastery.

The pilgrimage site is associated to Guru Rimpoche, a Buddhist saint. He is believed to have introduced Buddhism in Bhutan. According to the legend, Guru Rimpoche meditated in a cave for many years which is the inner sanctum of the monastery. The legend further adds that Guru arrived at the meditation site riding atop a flying tigress and thus the name, The Tiger’s Nest. Paro Taktsang is one of the most sacred religious sites in Bhutan.

Whether you believe the story behind this place, to witness an architectural marvel and just be able to enjoy the panoramic view of the Paro valley below from the top is worth the hike. The monastery has attracted thousands of tourists from around the globe. The Duke and Duchess of Cambridge were the last well known faces to have trekked to the Tiger’s Nest.

The mask dance festival is celebrated annually. The event is held within and around the great Dzongs across the country. The festival honors Guru Rimpoche and celebrates his glorious deeds. It lasts several days and during the event, the monks chants prayers and perform religion inspired choreographed dances throughout the day. The sacred dance is believed to invoke deities to bless the congregation. The monks perform the dances wearing colorful silk robes and wear exquisitely crafted masks depicting pantheon of Buddhist gods and deities. 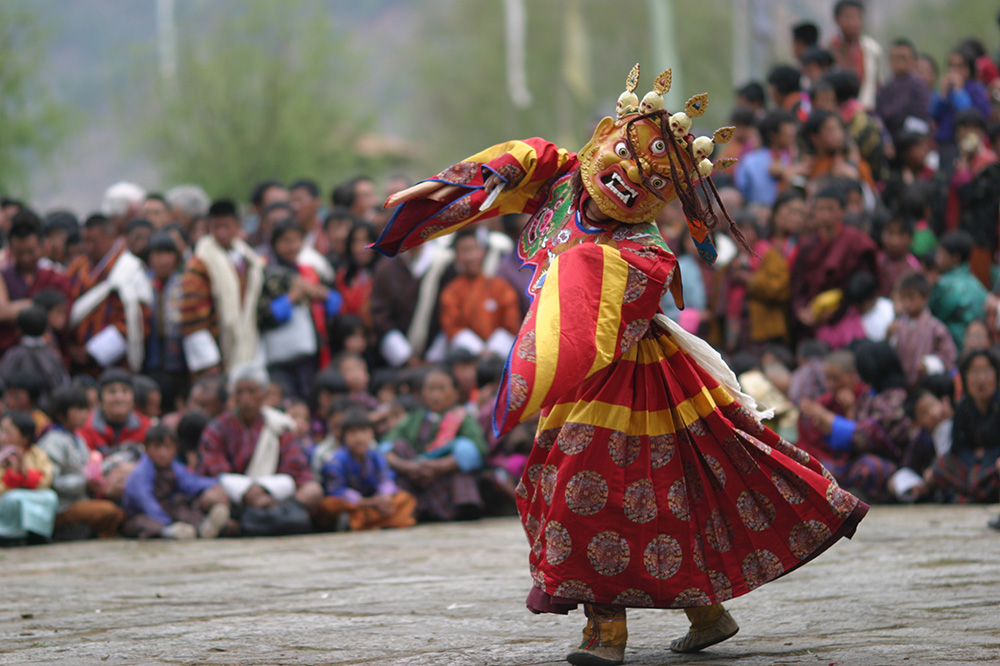 The Mask Dance Festival in Bhutan is an important traditional festival

During this national holiday, people from within the region attend the event to receive blessing and cleanse bad karma. It is also a social tradition for people to dress in their finest clothes and jewelries. The festival concludes with the unfurling of a giant applique depicting Guru Rimpoche and the offering of blessing. The two most popular festival attended by tourists are the Paro Tsechu and the Thimphu Tsechu.

The presence of Dzong (Fortress) in the medieval era across the country symbolized the recognition of a central authority by the people in the region. Dzongs in Bhutan were mostly constructed during and after the unification of modern day Bhutan in the 16th and 17th century. Dzongs served multiple purposes. It was the seat for the district administration and it also housed the central monk body. The open courtyards within the colossal structure were used for social gatherings and festival celebration. 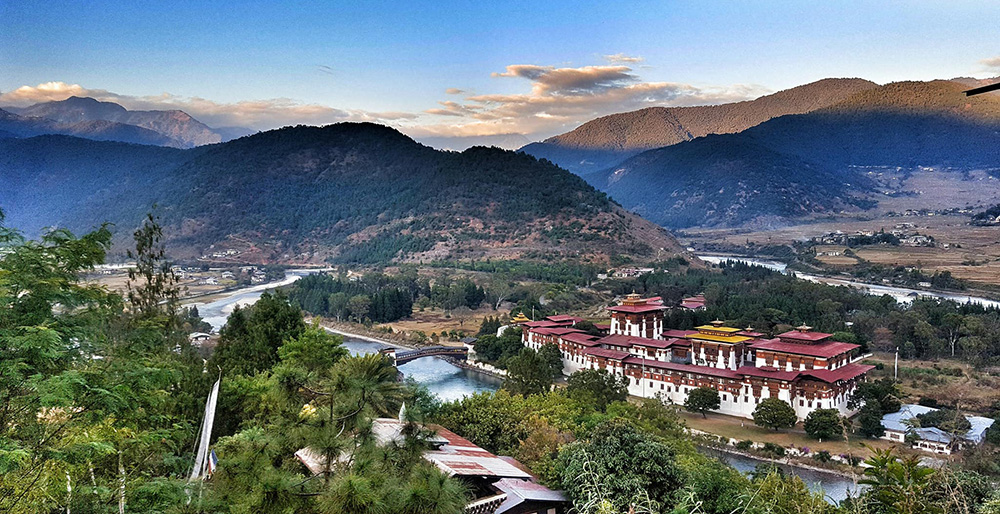 The Punakha Dzong in Bhutan

A typical Dzong consists of multiple structures which houses sacred shrines, assembly halls, offices and accommodation for monks. These structures are enclosed by high rising wall which is considered the exterior of a Dzong. Dzongs were mostly built over a ridge. During the times of war, the impenetrable high wall and superior vantage offered from the ridge made Dzongs ideal military barrack.

The two most visited Dzongs in Bhutan are the Punakha Dzong and the Thimphu Tashichhodzong. Dzongs continue to serve its roles. The Thimphu Dzong houses the Office of His Majesty the King, important government agencies and the central monk body.

This evolutionary process through years of isolation resulted in the formation of an authentic Bhutanese culture deeply inspired by Buddhism and core values that promote harmony and contentment in our lives. Thus the Bhutanese people are regarded as the one of the happiest people on earth and Bhutan the Land of Happiness.

The Constitution of Bhutan mandates a minimum of 60% forest cover of its total land area at all times. Bhutan currently has 72% forest coverage out of which the majority is identified as protected areas, national parks and sanctuaries conserving its rich and diverse ecology. The natural environment of Bhutan is home to many rare species such as the Snow Leopard, Red Panda, Himalayan Black Bear, Black Necked Cranes and Golden Masheer. 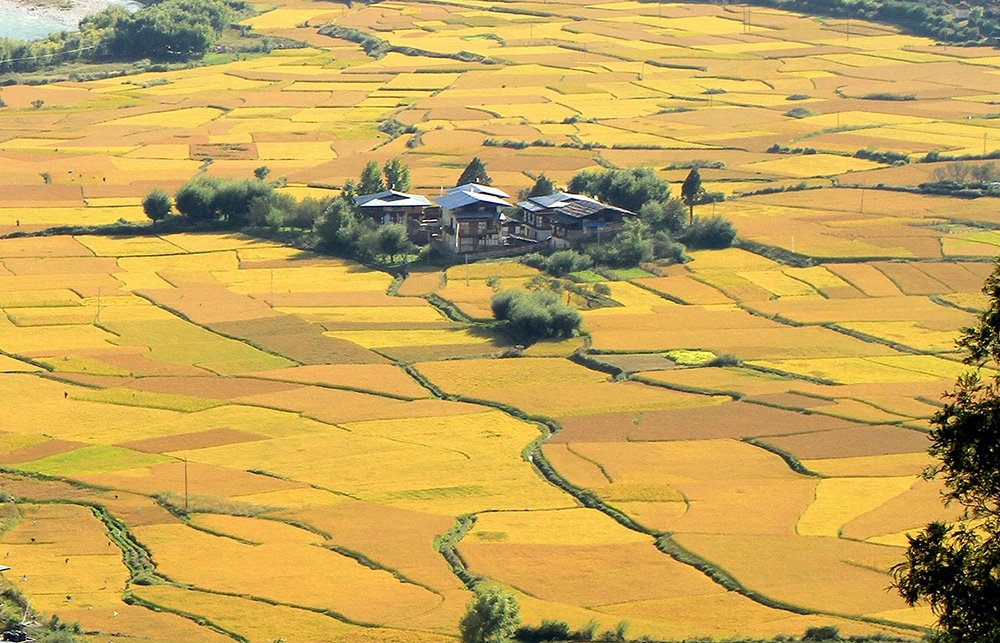 Planning your Trip to Bhutan

To avoid being overrun by mass tourism and ensure sustainability, the Royal Government of Bhutan promotes high value, low impact tourism. The Government enforces a minimum daily spending regulation and charges US$ 250.00 per person per night during the peak traveling season and US$ 200.00 per person per night during the lean season. The amount, however, includes accommodation, daily meals, guide services and land transport. Interested travelers must also book their trip through an authorized local tour operator. Interested travelers can either plan a solo or group trip to visit Bhutan. However, solo trips are levied a FIT surcharge.

Visit Bhutan: Getting To Bhutan

-Confetti Travel Café occasionally provides guest articles we believe shares information or services that may be useful to our readers.

Sonam Dorji is a travel writer and blogs at BookMyTour is an authorized tour operator in Bhutan. Sonam also helps interested travelers plan tailor-made tours as per their needs and preferences.