Imbibing in Afternoon Tea at the Peabody Memphis Hotel 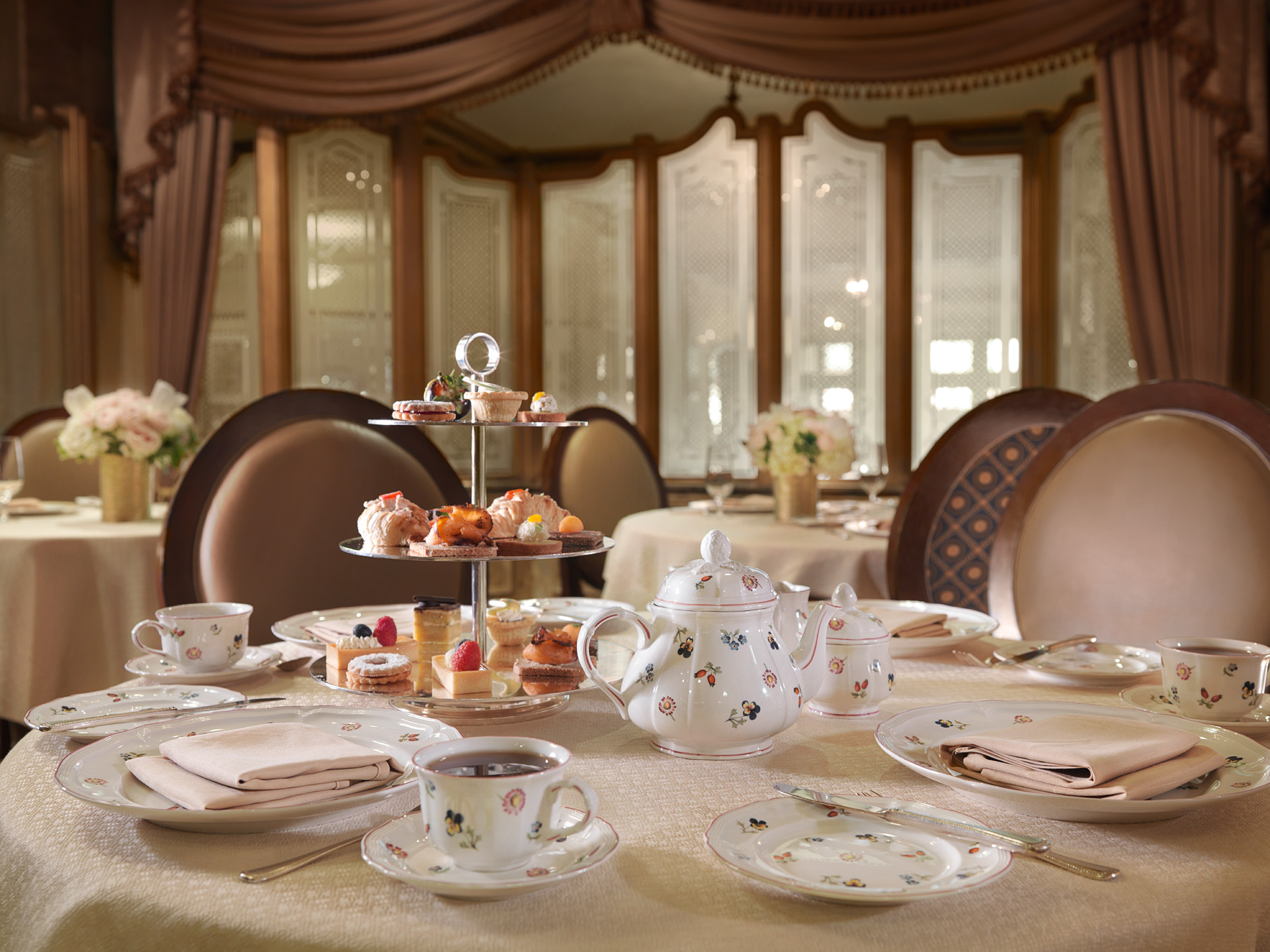 The gentle clink of heavily weighted silverware against delicate china plates, snippets of muted conversations floating through the air like dust moats on a hot, steamy afternoon in the South were the only sounds in Chez Phillipe during tea at the Peabody Hotel. 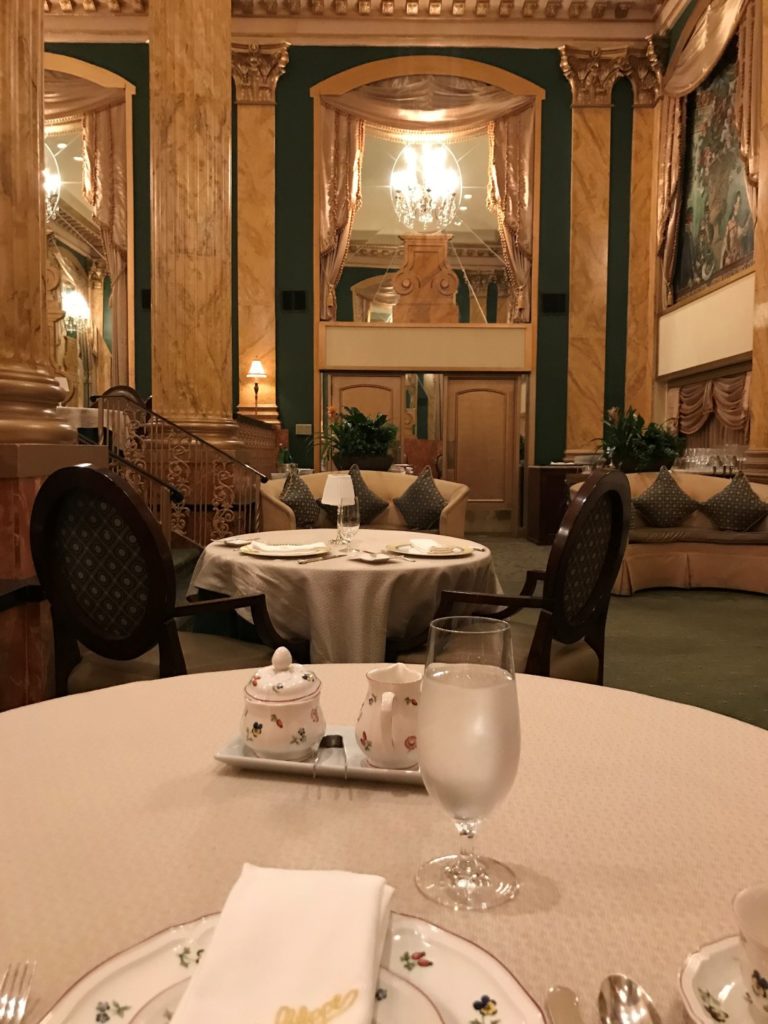 The tradition of afternoon tea goes back many of years to its beginnings in England in 1840. Anna Russell, the seventh Duchess of Bedford, instituted the ritual because she would experience hunger pangs in the late afternoon. There was an extended period between midday lunch and the fashionably late dinner, served at 8 o’clock in the evening. It began with a tray of tea, bread & butter – just enough to hold her hunger pangs at bay until dinner.

Afternoon tea has evolved over the years, and now most often consists of three courses: a savory course that includes tea sandwiches; a second course offering scones with jam and cream; and a third course of sweets. The courses are most often served on a three-tiered tray that seems to dominate the table. 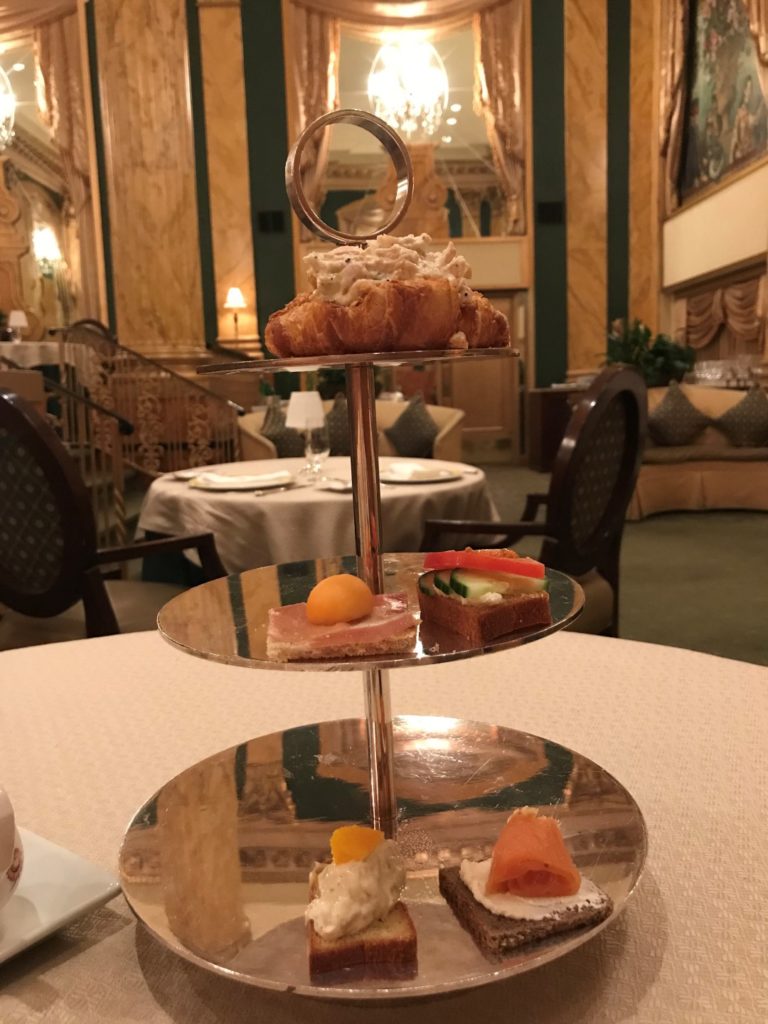 Afternoon Tea at the Peabody Hotel in Memphis

Decorated in soft muted tones of gold and pops of hunter green from the crisp linens that dress the tables, the atmosphere sets the stage for the main show – the food. Dining at Chez Phillipe is an experience to be savored, much like an excellent aged port wine.

The wait staff, dressed in black slacks, muted gold vests with crisp, starch white shirts topped with a black day tie seem to glide across the floors soundlessly. They are attentive without hovering. As my waiter explained the tea menu, he helped guide my choice of teas for the meal.

To open my meal, I chose the Scarlet tea, a lovely fruity tea that did not require anything but one lump of sugar. (“One lump or two?”) As I glanced down at the gleaming silver gracing the table, memories of Charm School ran through my head. “Work inward from the outside. If in doubt, follow your host’s lead. Let the waiter pour your first cup of tea. Cut the sandwiches into bite-size portions. Sip your tea slowly and carefully, and don’t plop the sugar lump into the cup. And for heaven’s sake, don’t use your fingers.” These admonishments stood me in good stead as I began my afternoon tea experience. 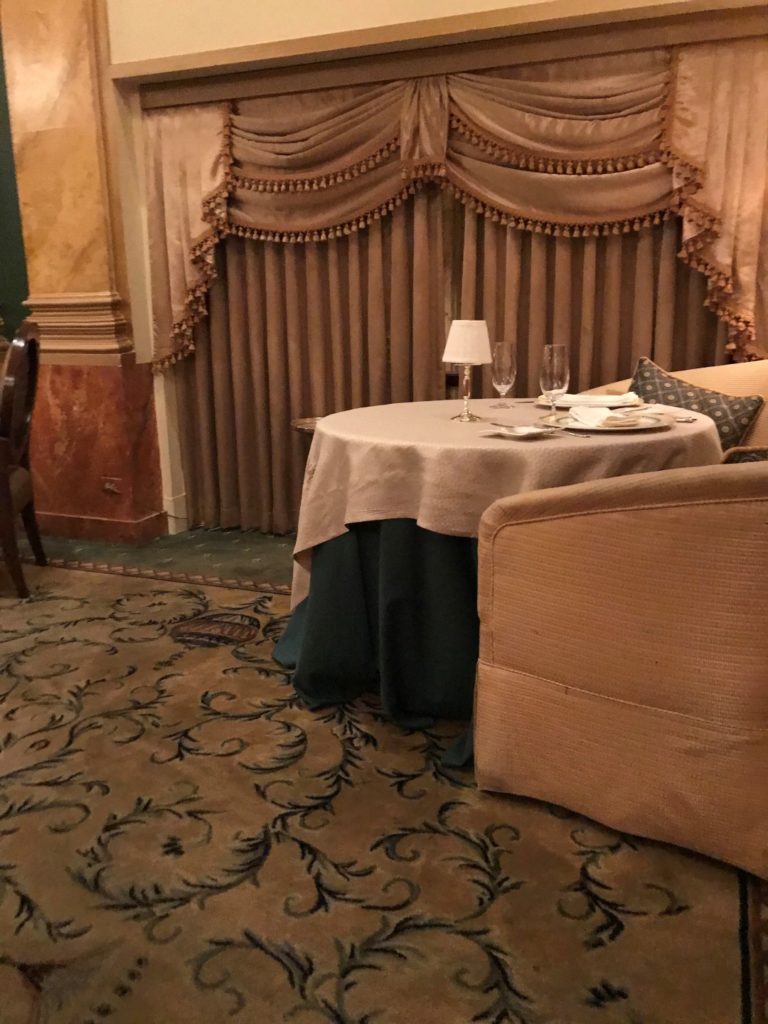 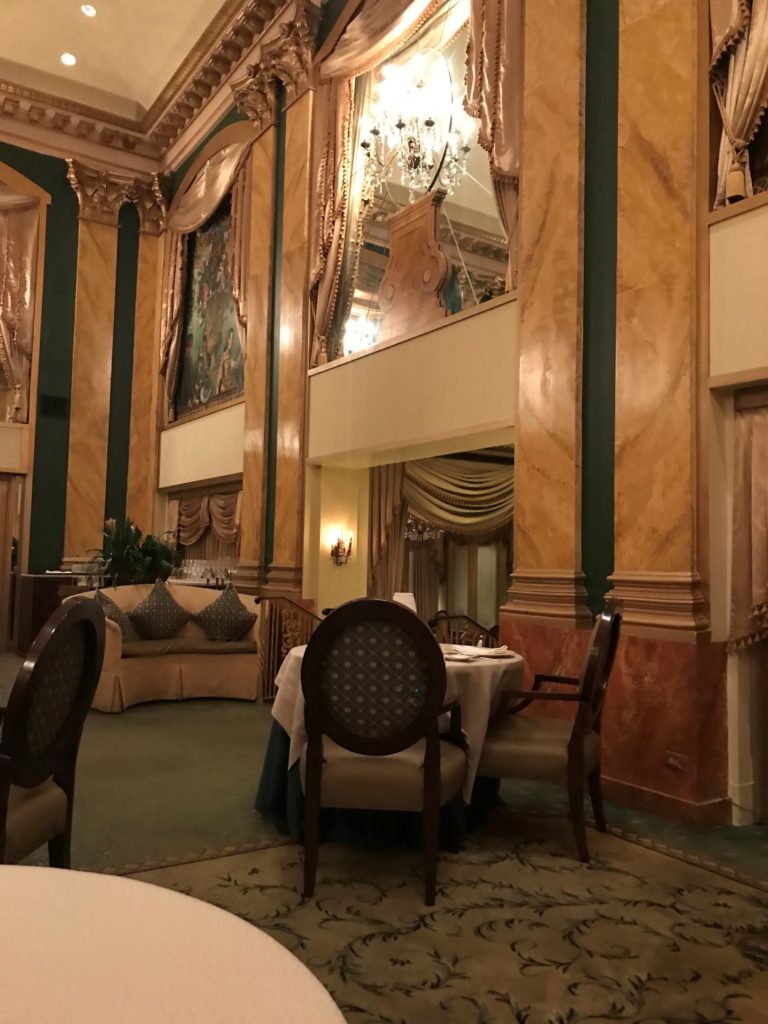 As I sipped and savored my tea, the waiter seemed to appear out of nowhere with a gleaming three-tiered tray containing petite tea sandwiches – the savory course. I gently lifted the first sandwich, a chicken salad on a small croissant and took a bite. I savored the delicious dill-heavy chicken salad; a southern staple because in South Florida you can’t find chicken salad like this! Out of the first course, chicken salad aside, my favorite was a prosciutto ham with apricot preserves. The apricot preserves were sweet enough to cut the saltiness of the ham, and the flavors opened and collided in my mouth. 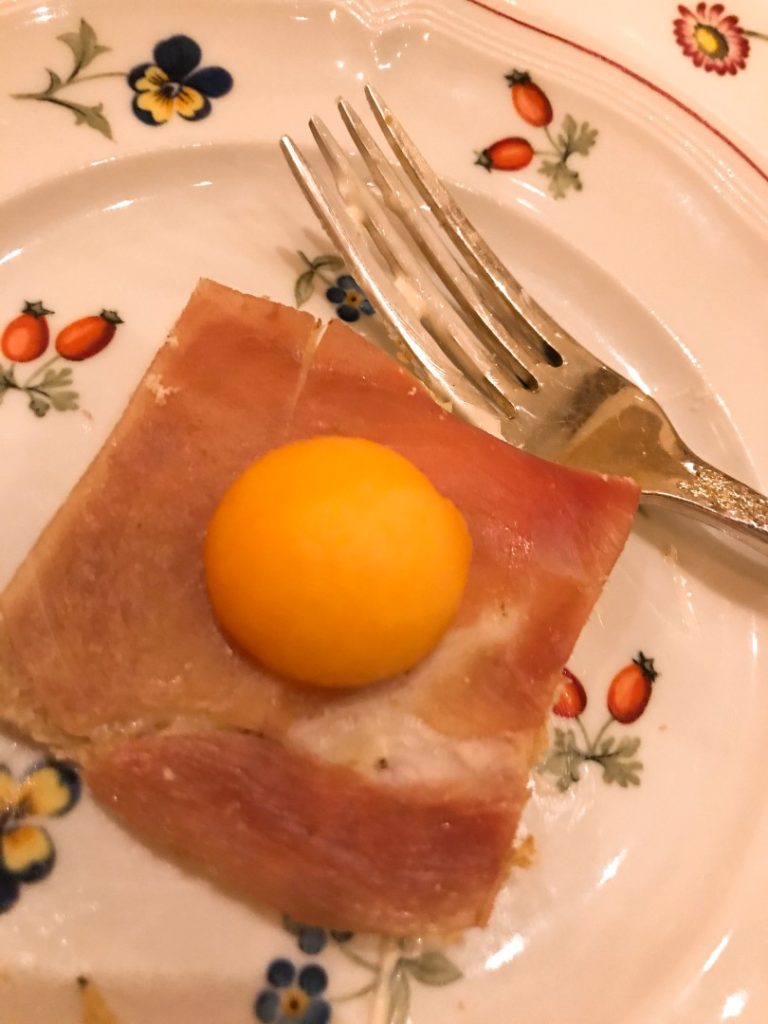 A first course item (Photo by Betsi and Jim Hill)

The second course was divine! A large blueberry scone, almost the size of my small plate, was served with raspberry jam and the most delicious Devonshire cream I have ever put in my mouth. (I could have eaten the cream by itself, it was that good!)  The scone was the perfect balance between a biscuit and was sweet from the blueberries (and these blueberries were fresh, not canned) without being overpowering. 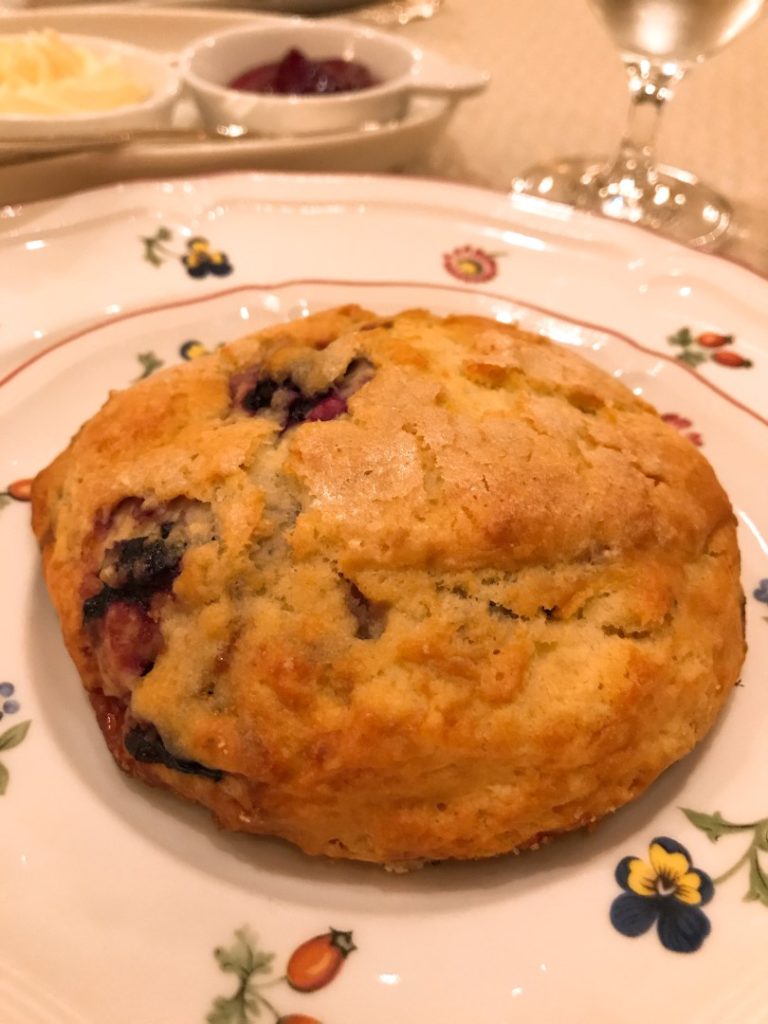 A change in tea for the third course, this time an Earl Grey Supreme, required two lumps of sugar. It was not overpowering and was just the right backdrop for the dessert course.

A selection of five petite desserts was artfully arranged on a delicate china plate. The desserts were designed to play off of one another taste wise, and they indeed met that mark.

There was an opera cake, with layers of almond sponge cake that had been soaked in coffee, layered with ganache and either coffee or Grand Marnier, topped with buttercream and covered in chocolate glaze. A citrus tartlet worked perfectly with the opera cake. A pistachio tart, lemonade cheesecake, and chocolate dipped cream puff rounded out this course. I honestly could not choose a favorite because they were all delectable! 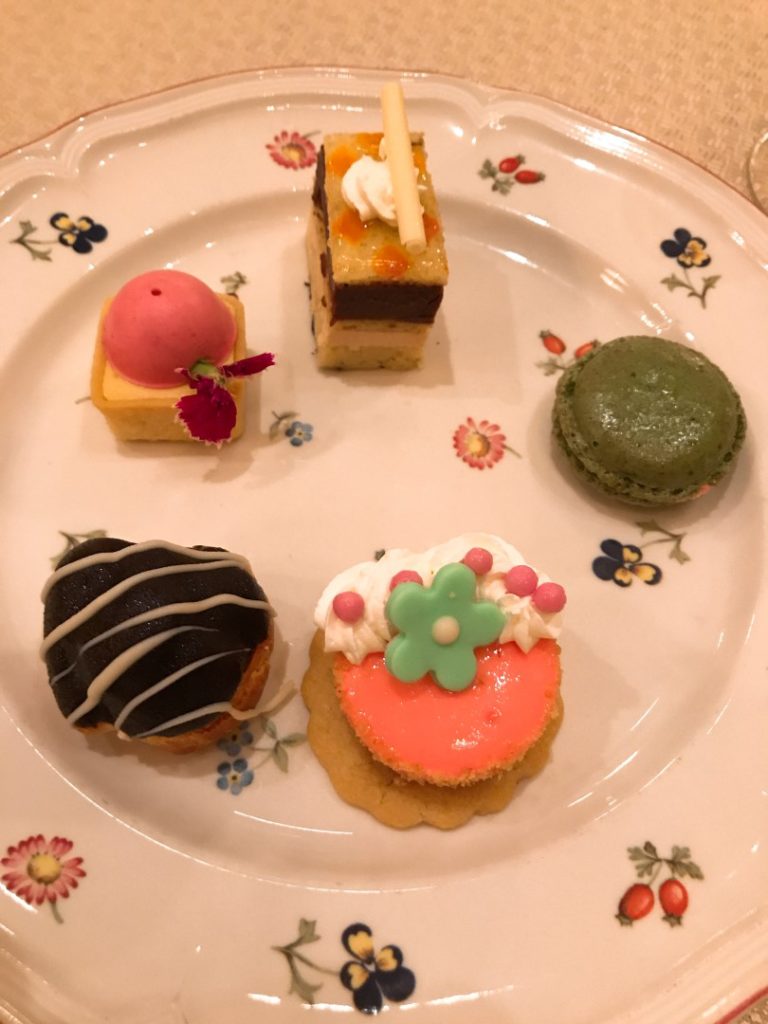 The third course, a sweets course, at afternoon tea at the Peabody Hotel. (Photo Betsi and Jim Hill)

Imbibing in a Southern Tradition at the Peabody Memphis

-All photos by Betsi and Jim Hill, except the cover photo. The cover cover photo is by and with courtesy of Trey Clark for The Peabody Memphis.

Betsi and Jim Hill, husband and wife of 28 years, are the traveling team at Betsi's World, https://www.betsiworld.com. Betsi is a freelance journalist and blogger, and Jim is a freelance photographer. Together Betsi and Jim craft lifestyle, history, culture and cuisine content and photography for each destination they visit.

Take a Look at These 10 Travel Trends

[…] to be savored. At the Ivy Hotel, they definitely want you to savor each delicious bite of their afternoon tea! Delicious sandwiches and scones are brought to your private table in the tea room. As you gaze […]