Charleston’s Cocoa Academic: A Leader in the Bean to Bar Movement 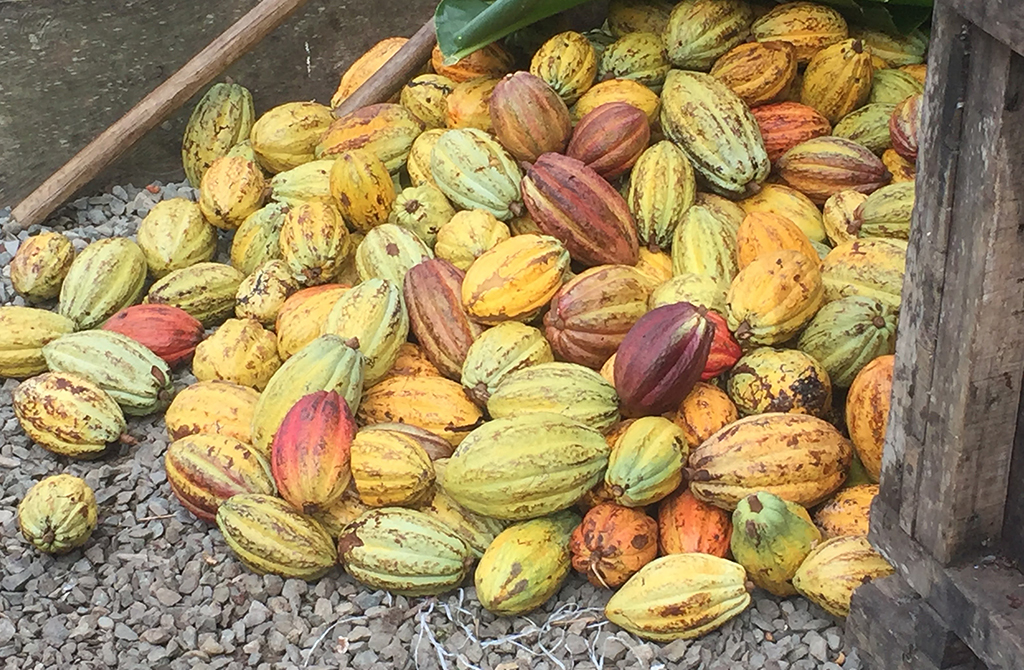 Many fortunate souls visit Charleston, South Carolina to experience the fantastic food and taste the award-winning craft beers while soaking in the friendly southern charm. But there’s a new uprising that is spreading throughout the town that most visitors are unaware of and only those deeply entrenched in the food scene know about — conquering The Bean to Bar Movement. And Charleston’s Cocoa Academic is a leader in that movement. 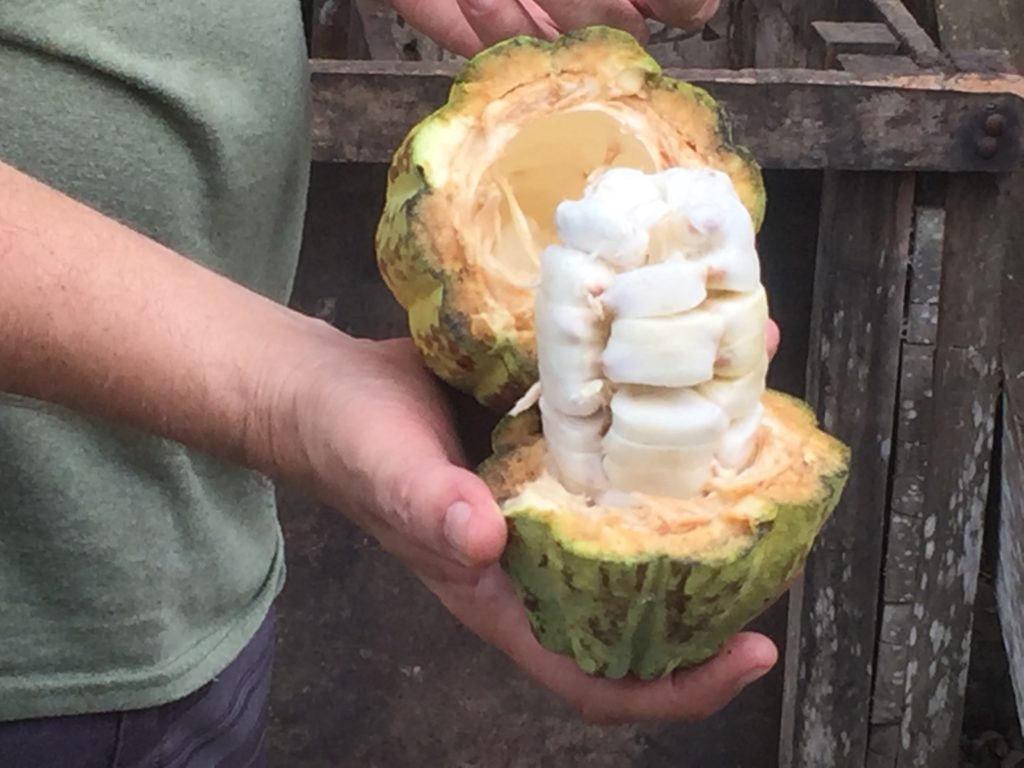 The inside of a cacao pod (Photo Carol and Mike Ivey)

The Bean to Bar Movement

What is the Bean to Bar Movement? Think Chocolate — only the finest tasting and most vibrant hand-crafted artisan chocolates. Chocolates made by only the best chocolate makers in the world using beans sourced directly from farmers in Africa, Asia and Central America. Chocolate that you experience as well as taste — with delicious aromas that bring to mind a favorite moment in time, melting in your mouth and tickling your tongue with exciting textures and sensations. 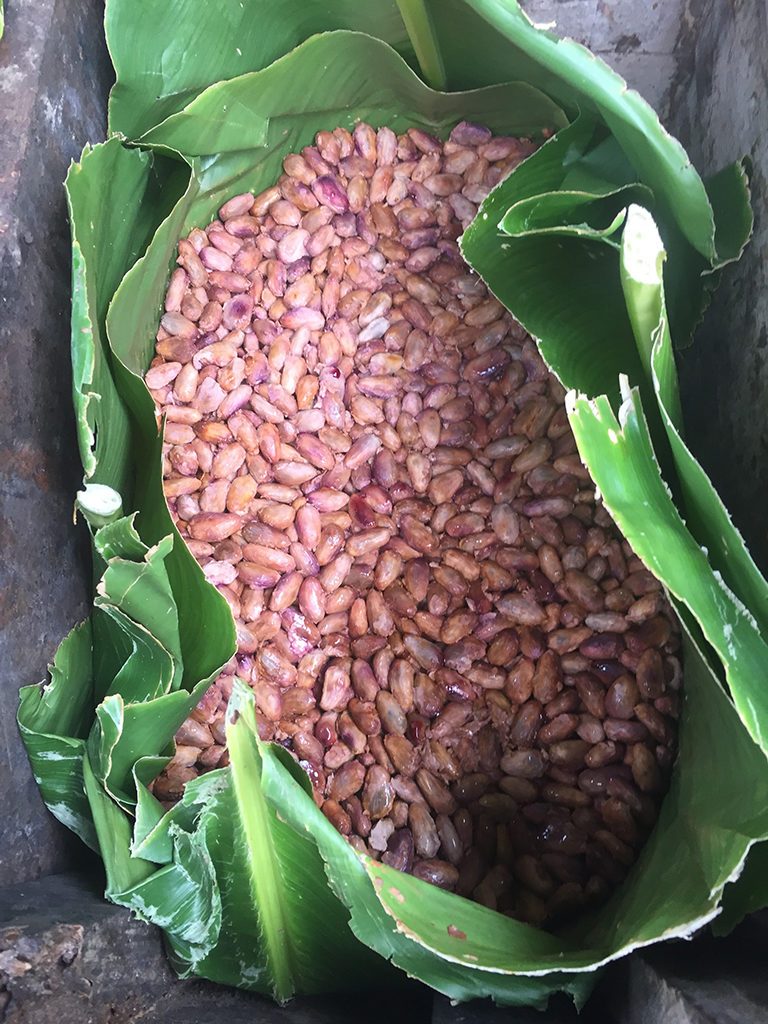 The beans are fermented (Photo Carol and Mike Ivey)

It takes a special kind of chocolate artist to be able to create that type of experience. A little-known secret is that Charleston is lucky enough to have one in residence; Bethany Nunn. Bethany has worked in the chocolate industry for nine years. Originally from Scotland, she started as a chocolate & French patisserie apprentice in the Scottish Borders and then went on to get her Qualification in Patisserie & Confectionery from Edinburgh’s Telford College in the capital city. ​Over several years Bethany trained top chefs in the art of chocolate making. During her time in London, she taught classes to thousands of people including Patisserie students from Le Cordon Bleu. 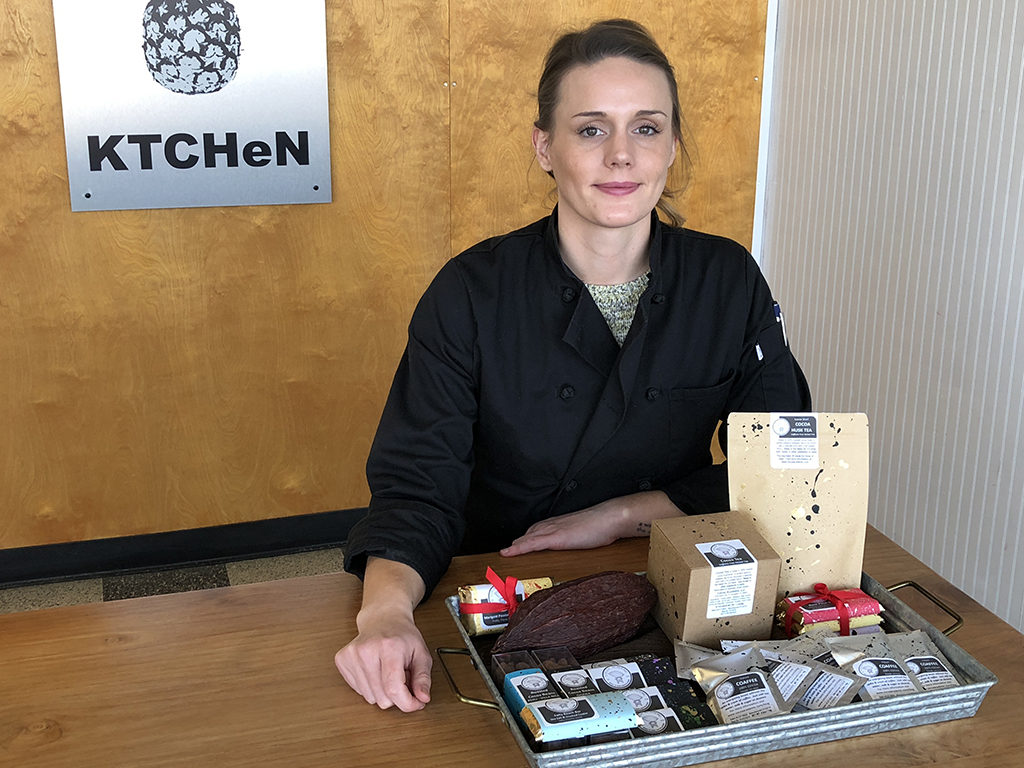 Discovering bean to bar chocolate making in 2012, she has made it her passion. To bring her passion to life, Bethany started Cocoa Academic in Charleston in 2016.

“We taste chocolate almost like we taste wine or coffee,” says Bethany. “The whole bean to bar movement is quite new, really just becoming recognized in the last five or 10 years … when I first started, the process of chocolate making was hidden by really large corporations. Small companies have been able to take chocolate making into their own hands. Farmers can use sustainable practices and get a better price for beans by cutting out the middlemen. From the sourcing side we’re able to make really refined chocolate.” 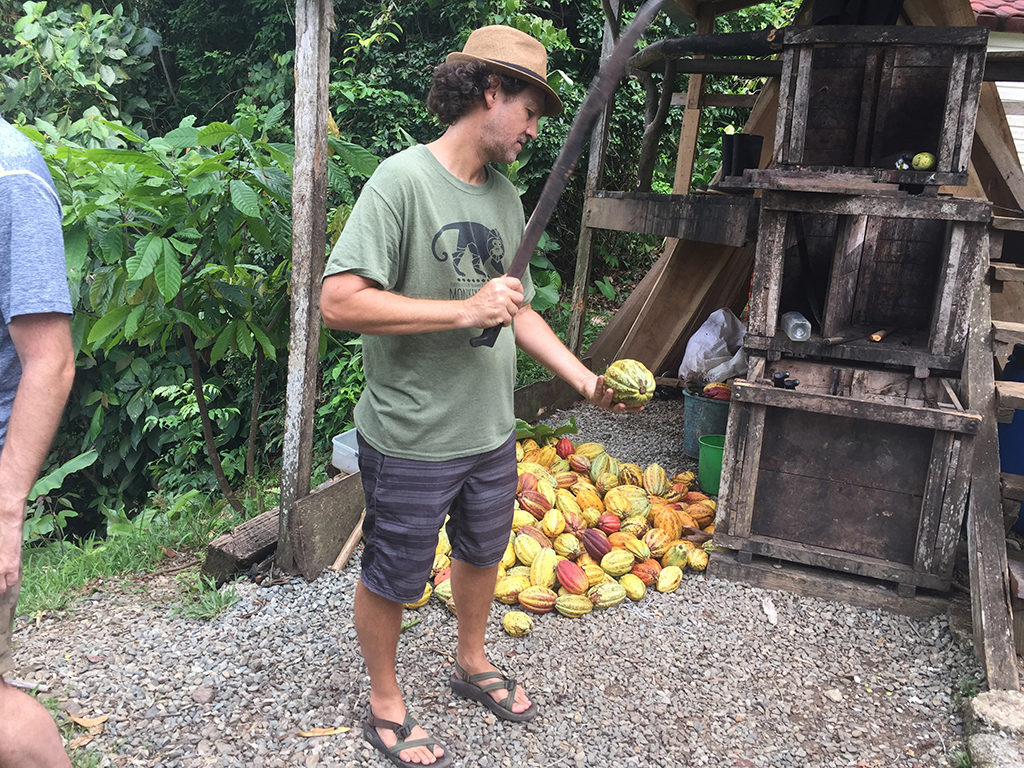 Cocoa Academic offers tasting journeys and, for those interested in learning more, a school designed to teach the fine art of chocolate making. Bethany explained that there is much more to chocolate than just the taste and the feel on your tongue. Fine chocolate must be beautifully glossy, have a delicious smell and if tempered properly have a nice “snap” when you bite into it indicating that all the cocoa butter crystals are aligned perfectly. Make no mistake; chocolate making is truly an art and one that she is passionate about. 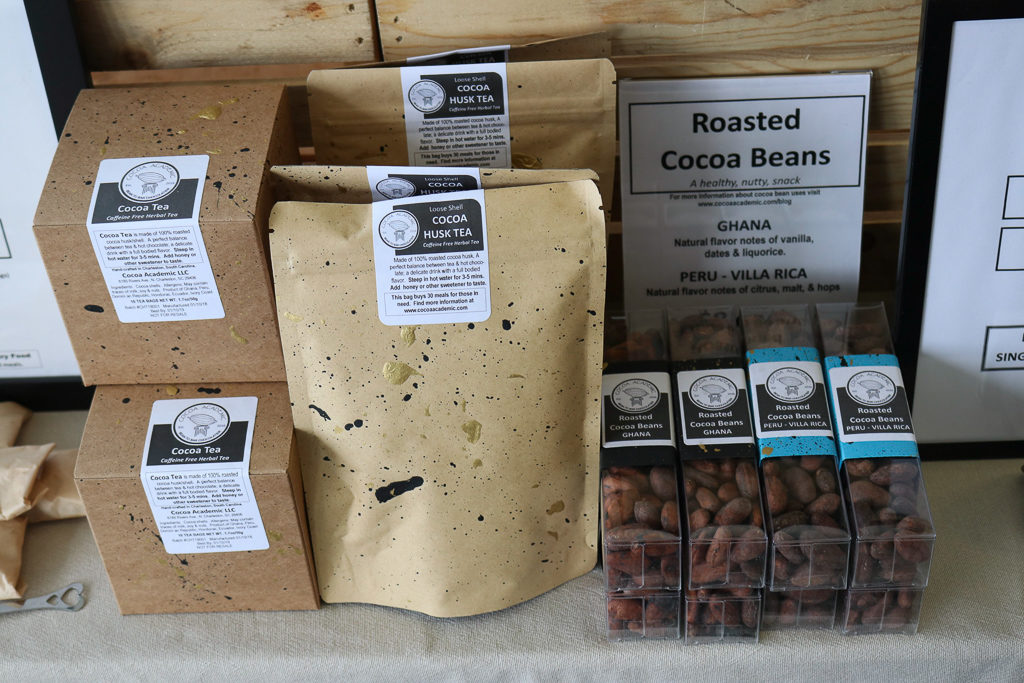 We recently visited one of Nunn’s chocolate tasting journeys designed to demonstrate some of the 600 flavor notes in chocolate and inspire others to share in her passion. She shared that the cocoa plant, Theobroma Cacao, literally translates to “Food of the Gods”, and considering it goes all the way back to the Mayans and Aztecs it’s not hard to imagine why. 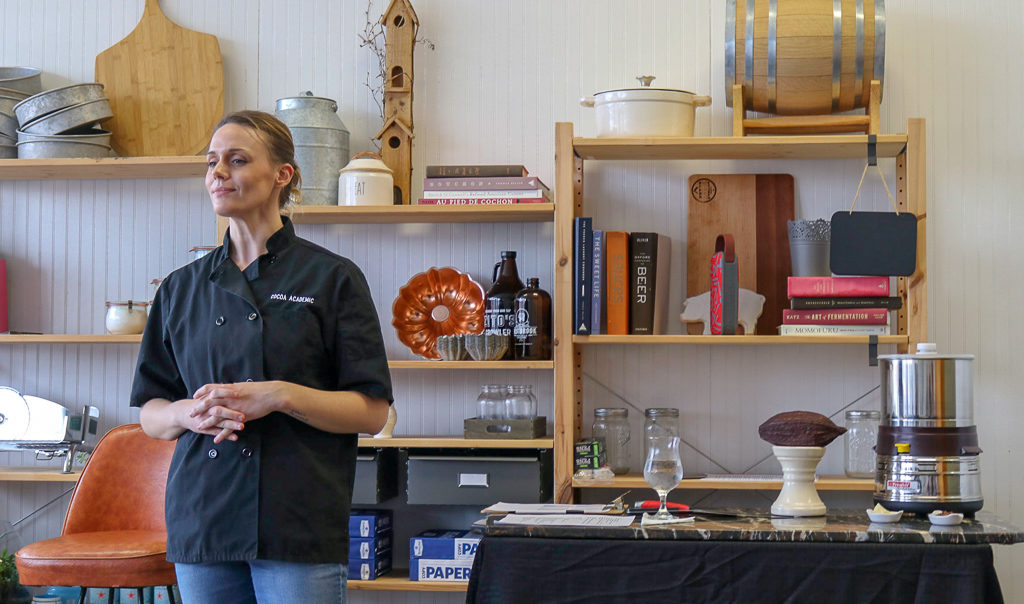 A tasting journey is just that- 23 different tastings of 3 different types of cocoa beans — Forastero, Trinitario, and the most desired Criollo. Beans procured from the rainforests of West Africa allow you to experience the creamy fruity flavors of the Ghana dark. Peru gave us more smoky, woody and sour flavors – slightly bitter but still sweet. Ecuador boasted a well-rounded mix of cocoa flavors with a floral-earthy and floral-winey taste profile. The Haitian cocoa was fruity and smooth on the tongue, while the Honduran was more earthly and deep. We sampled an Italian chocolate that was stored with lavender and another with thyme and learned that chocolate absorbs the smells and flavors that surround it. Finishing our chocolate tour around the world with French truffles and Bethany’s own roasted cocoa husk tea truly makes this a memorable experience. 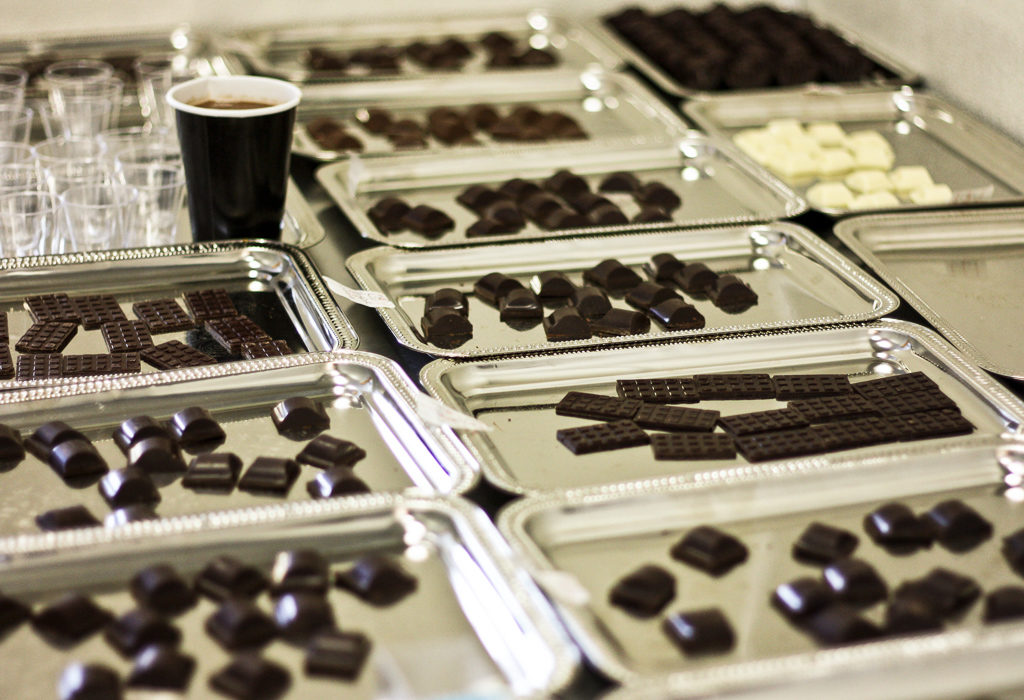 Trays of chocolate for the tastings (Photo courtesy Cocoa Academic)

Chocolate Making Around the World

For those interested in history, you will learn a bit about the origins of chocolate and how different cultures used and embraced it. The Mayans first discovered cocoa beans and learned to roast and dry them similar to the process used today. Grinding them into a paste and adding various spices including chili peppers they created a frothy, spicy, bitter drink. The Aztecs developed more uses. In addition to drinking their chocolate, they used the cocoa beans as currency, smeared the cocoa butter on their skin to provide sun protection and their warriors would consume cocoa before going into battle to provide them with energy to fight. The first Europeans to discover cocoa were the Spanish. Spaniard, Hernán Cortés, was sent to take down Montezuma, the leader of the Aztec empire, with the purpose of sending back cocoa to Spain. 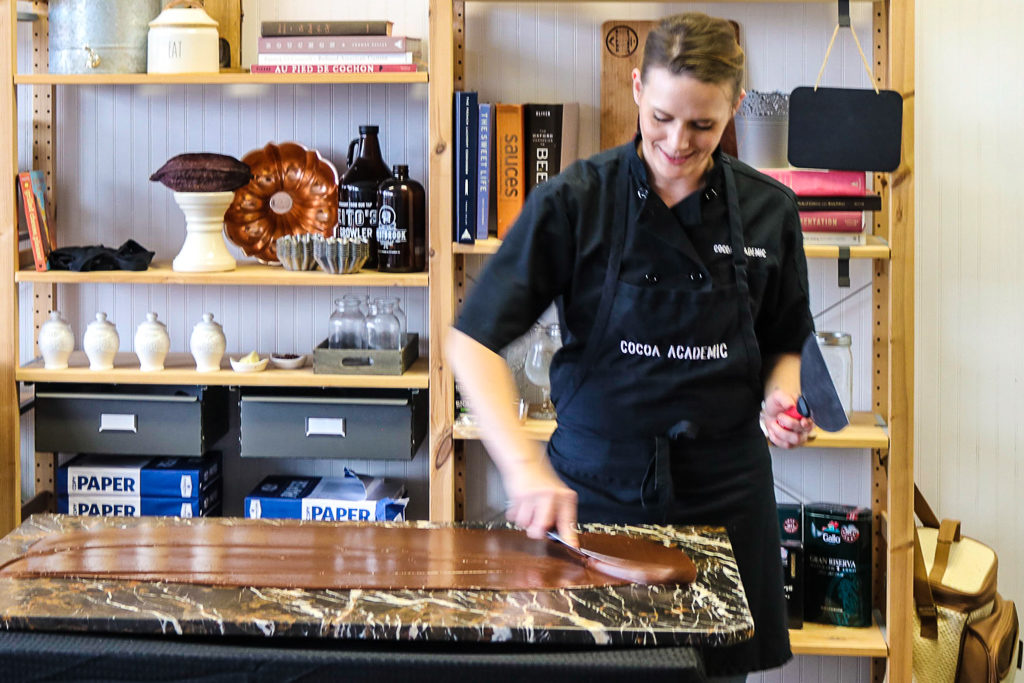 After its arrival in Europe, the way chocolate was consumed changed rather drastically. It was still consumed in liquid form, but cream and honey were added to create a syrupy sweet taste, and was generally only drunk by royalty and the wealthy. Chocolate’s popularity quickly spread across the rest of Europe, including France, Italy, Switzerland, England — everyone wanted this delicacy. The British choose to turn it into a bar in 1847 and so the modern forms of chocolate began. 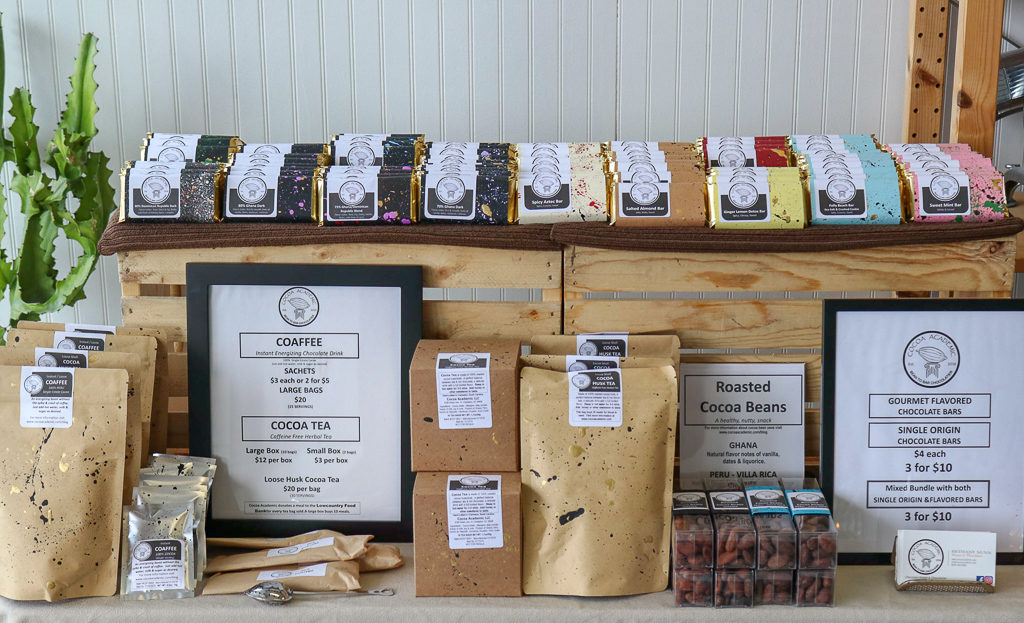 You’ll have a hard time not wanting one of everything. (Photo Carol and Mike Ivey)

Think this decadent experience can’t get any better? How about the fact that Cocoa Academic has a “no waste” initiative?  By roasting and using the cocoa husks to make  delicious tea instead of throwing waste out, nothing in the entire chocolate making process is thrown away. That’s an enormous win for the environment. Top that off with the fact that for every tea bag that is sold, the company donates a meal to the Charleston Lowcountry Food Bank and you have a double win. They donated over 800 meals in December 2017 — that’s about 26 meals per day. What a sweet way to do something enjoyable for yourself while helping others.

Book a tasting, buy some chocolate or tea and decide if being a chocolate maker is in your future.

More On Our Site About Charleston:

-Photos by Carol and Mike Ivey, except as credited.

Carol and Mike Ivey are freelance writers and photographers with a passion for travel who have been exploring together for over 30 years. Follow along as they share their experiences as 50-somethings that still love adventure and seeing the world at CuriousGypsies.com. They are currently based out of Charleston, South Carolina where they live aboard their 53-foot Hatteras Motor Yacht, Gypsy Soul.

How to Make Lattes Without an Espresso Machine

Maryhill Museum of Art: An Eclectic Art Museum in the Columbia Gorge

This story made me crazy! I had to make some hot cocolate after reading it. Thank you for such a ‘tasteful’ and informative article. Very well done. –MaryGo

Thanks for your kind words Mary. We really enjoyed this experience.
Carol

I feel the same way, Mary. In my case, I raided my chocolate stash!

Thank you for teaching me something new about Charleston! I have become more picky about my chocolate in the past few years and there is a difference between artisan and mass produced chocolate. The best experience I ever had with chocolate was in Belize where I visited a cacao farm. The bonus was that I met the man who had made my chocolate bar… only a week prior!

I love this, Renada, thank you. Travel (and yes, years and experience) gives us the chance to learn about all sorts of things. Seeing first-hand how food grows, how it’s made, and meeting the people who work hard with such passion adds a lot to the experience. I’ll take one good bite of good dark chocolate over a whole bar of lower quality chocolate anytime.

Hi Renada- I was not a big fan of dark chocolate until I tasted artisan chocolate, and now I cannot get enough! I would love to hear about your Belize trip since we are planning to go in the next few months. Will be fun to compare to our Costa Rica experience.