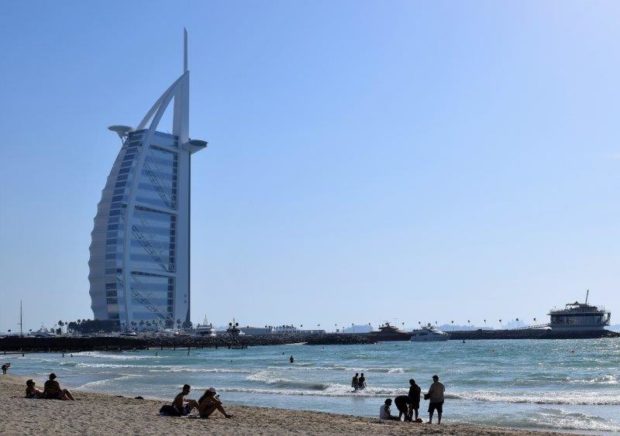 Layover in Dubai: Making the Most of a Short Stay

Turning flight layovers into opportunities to visit an extra destination is something that thrills experienced travelers—as I did on a recent 15-hour Dubai layover. 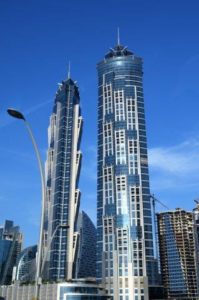 I arrived in Dubai after a 15-hour flight from Dallas, with 15 hours before my next flight. Not an optimum amount of time, really—too short to truly visit the city or get to know people. I could have spent the time in the airport since Dubai International Airport (DXB) is a city in and of itself. The airport is the major gateway for many destinations in the Middle East, Africa and Asia. While Emirates Air is the most visible airline, about 140 airlines fly in and out of DXB. (In 1990, DXB served 4.3 million passengers. In 2014, it served 70.4 million. And growth might rise to 100 million passengers by 2020.)

But just wandering the airport or getting an airport hotel room and sleeping wasn’t even a consideration. I looked forward to exploring Dubai. 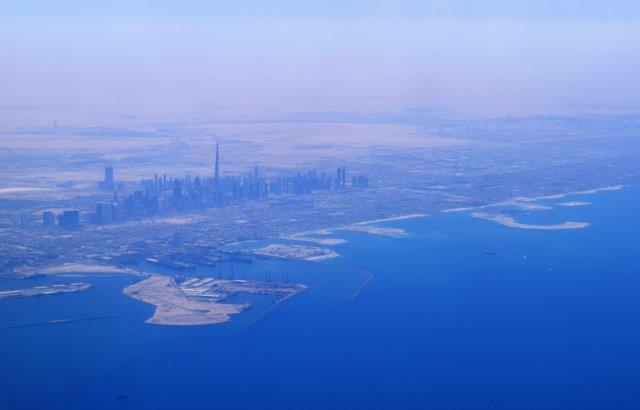 Dubai from the air, including Dubai’s tallest building, the Burj Khalifa.

On Your Own or With a Guide

Traffic in Dubai is heavy and chaotic, so definitely use public transportation. The Metro operates from the airport to many of the key areas in town and is your best bet. There’s also a Monorail and plenty of bus routes while in town.

Another option is to join any number of operators that begin their tours at the airport and cater to shorter excursions. For my layover, I decided to hire a guide named Sunil and his driver to take me around and show me some of Dubai’s key sites. 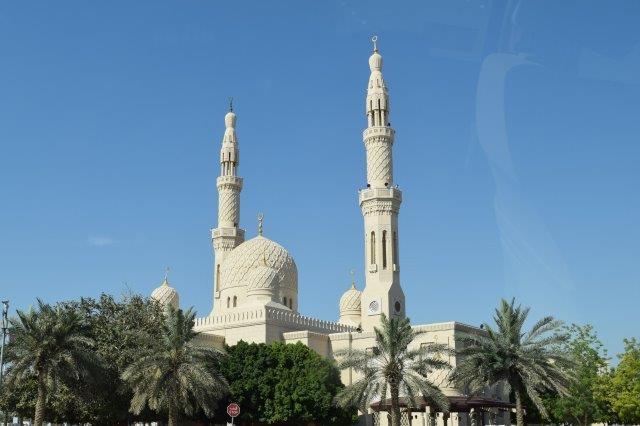 My city tour started with a water taxi ride across Dubai Creek. The water taxis (called abras), follow several routes. No ticket needed, a small charge, just pay the driver directly. You can also hire the abras privately, by the hour.  It’s a great way to see a bit of the waterfront and Old Dubai. 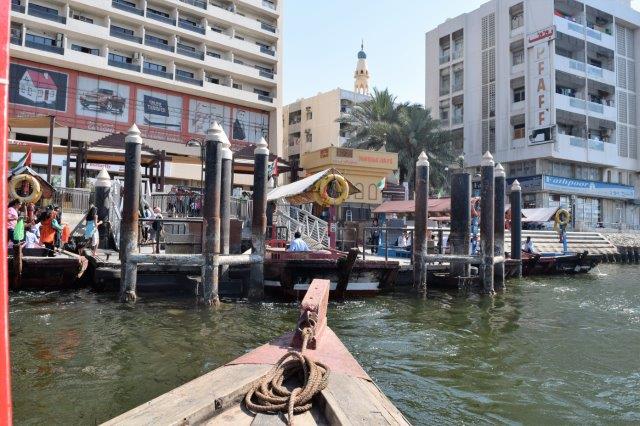 Water taxis, or abras, are a great way to get around. 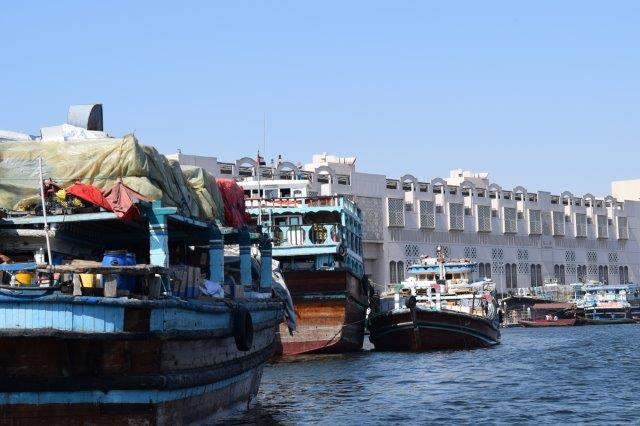 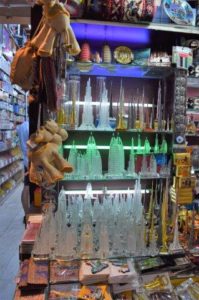 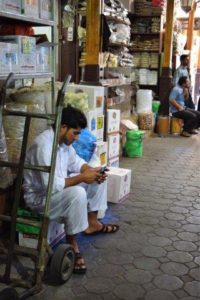 Route 1 took us to the The Spice Souk and Gold Souk. The markets are small, and appear to sell souvenirs and everyday goods more than anything, but the area is fun to see. Sunil used his iPad to show me old photos of what Dubai looked like from the 1950’s through the explosive growing in the 1990’s, and shared city history. 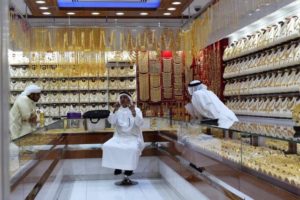 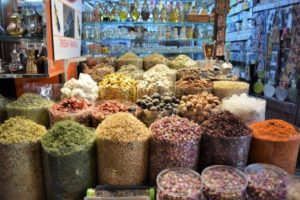 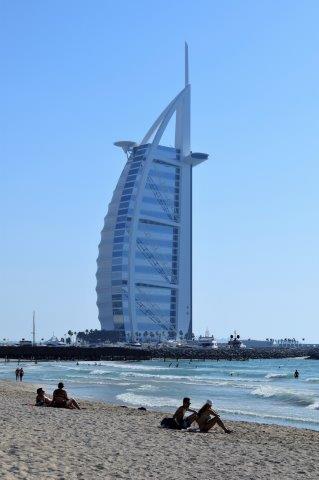 As we drove toward Jumeirah Beach along a palm tree-lined boulevard, we passed a section of town with block after block of medical buildings, wellness centers, dental centers, fertility clinics, and cosmetic and dermatology centers. Dubai has actively courted the medical tourist market, and hopes to attract a million tourists a year coming primarily for medical treatment by 2020. The Dubai Health Authority and Dubai Tourism have even teamed up to put together packages that combine medical treatment with time to enjoy the city and more of the United Arab Emirates (UAE).

Jumeirah Beach used to be called Chicago Beach, because it was the site of the former Chicago Beach Hotel and at one time was the home of the Chicago Bridge and Iron Company.

At the white-sand beach, I wade in the waters of the Persian Gulf (with temps that range between 75 -90 degrees), and enjoyed the view of the Burj Al Arab in the distance.

The Burj Al Arab is considered to be the most expensive and luxurious hotel in the world. (Rooms range from $1,800.00 to over $10,000.00 per night.) The beach is also close to Wild Wadi Water Park and the Mall of the Emirates, one of the largest malls in the world.

Dubai is a city of glittery skyscrapers, ultramodern amenities, and global business deals. Everywhere we walked, everywhere we drove, new real estate projects were going up. Yes, there have been “slumps” and “crashes” (such as the one in 2009) but the city is still growing at a staggering pace. 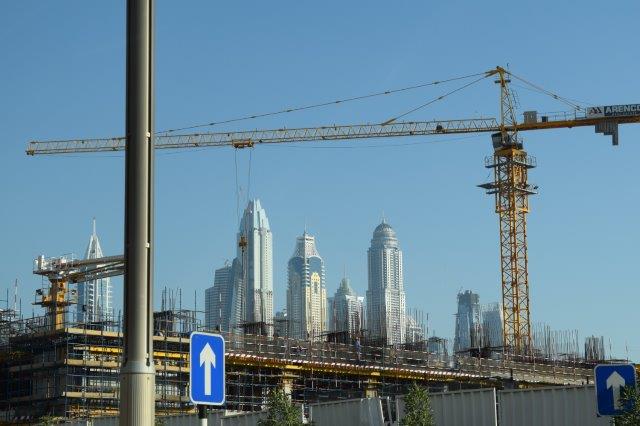 Dubai’s 2016 population is about 2.6 million, and it’s expected to rise to 3.4 million by 2020. About 71% of the emirate’s population is immigrants. Of these 71% immigrants, about 85% are Asian (primarily Indian, Pakistani, Filipino, Bangladeshi and Sri Lankan) and about 3% are considered “Western.” 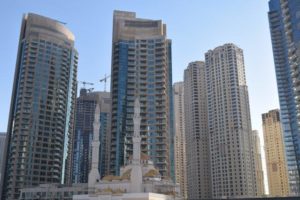 There are 202 different nationalities working in the Dubai labor market. The seven states that comprise the UAE have the highest rate of diversity in the world, in terms of nationalities. 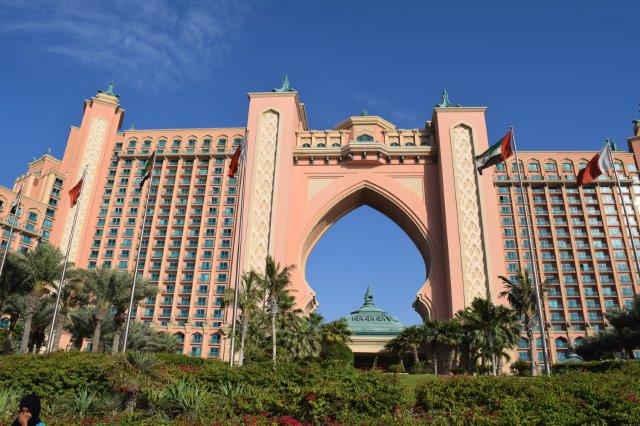 Another great district to wander—and a prestigious address for Dubai residents—is the Dubai Marina area. It’s the largest man-made marina in the world and it’s surrounded by some of the city’s tallest and most opulent buildings. At one point, 4,000 high-rise apartments sold in 72 hours. It’s an area buzzing with restaurants, recreation and entertainment complexes. The Marina Walk is a great place to stroll. 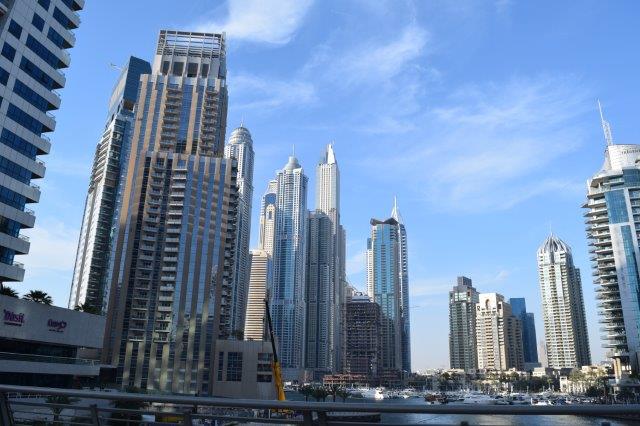 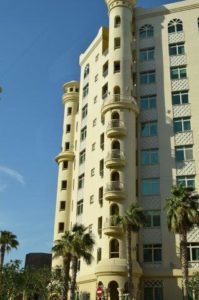 Dubai is, of course, a shopping mecca. There are countless malls, featuring every international brand you can imagine, as well as kiosks for any product you could possibly want or need. People walk by laden with store bags. Servants carry packages, walking behind whole families shopping. 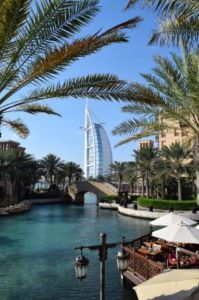 There are both indoor and outdoor malls. The outdoor areas often are designed with canopied walkways to provide shade. At Souk Madinat Jumeirah, sporadically placed misting machines refresh you as you walk around outdoors. 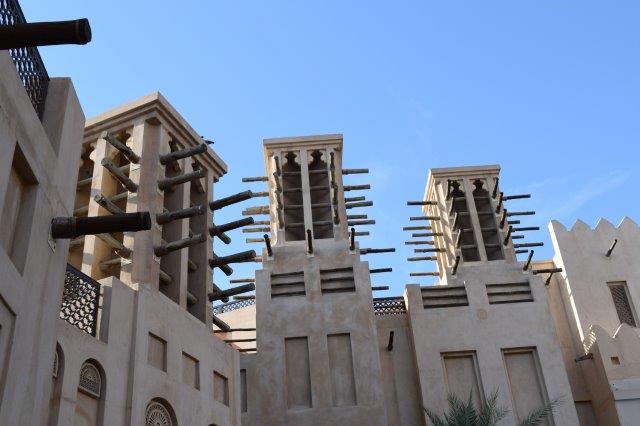 Throughout the city, loudspeakers amplify each of the five calls to prayer (salah) each day. 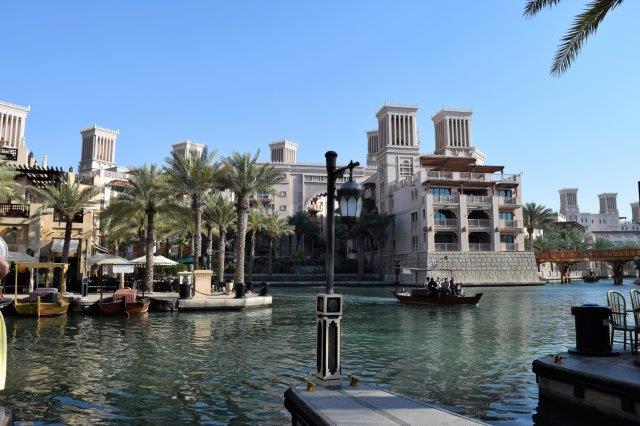 Inside Dubai Mall, one of the largest in the world (price tag: $20 billion dollars), and home to more than 1,200 shops, there’s the 2.64 million gallon Aquarium. (Admission: free.) 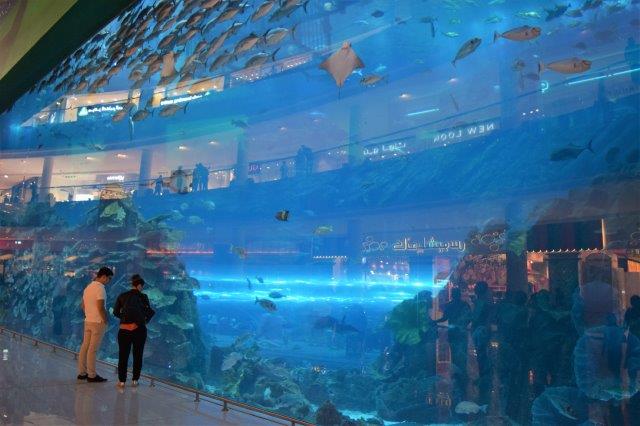 Burj Khalifa and the Dubai Fountain

Just before sunset, the place to be is outside Dubai Mall, in front of the Burj Khalifa, the tallest building in the world (as of this writing). The building has more than 160 stories and stands at 2,716.5 feet. Standing at the fountain, you really have to crane your neck and lean back just to see the top of the tower. 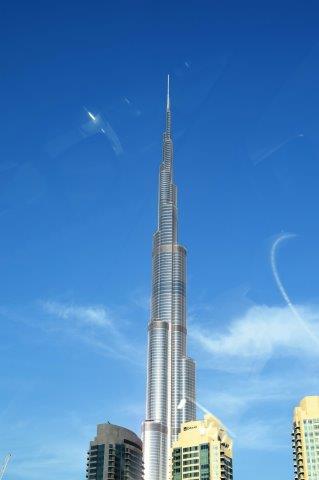 A diverse crowd of residents and tourists alike mill around the 30-acre man-made Burj Khalifa Lake. Some opt for a boat ride on the Lake. 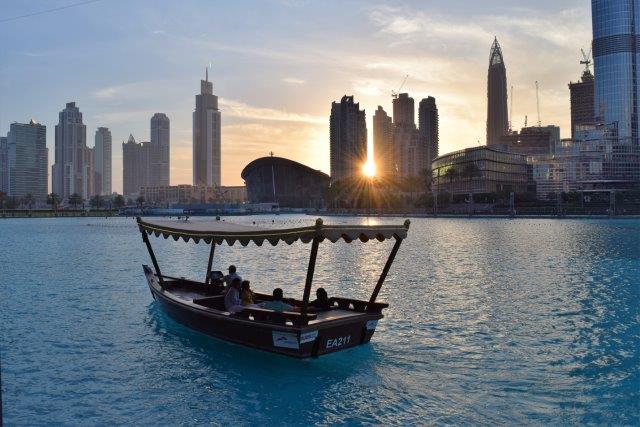 It’s a great place to stroll, people watch, and let languages from around the world wash over you. 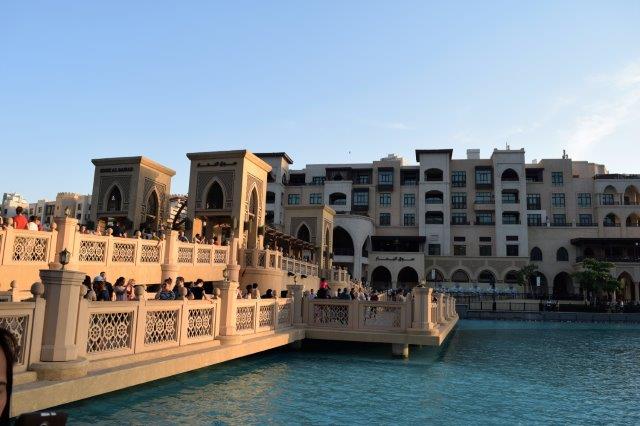 The crowd gathers for the water display at Burj Khalifa’s Fountain. 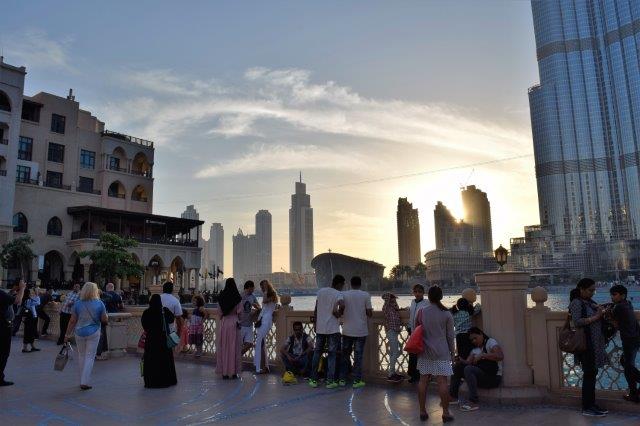 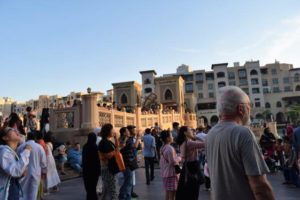 The Lake’s Fountain is the world’s largest and was designed by the same people who designed the Bellagio Fountain. This is Dubai’s most popular attraction.

Just before sunset, the loudspeaker music turns up, and jets of water shoot up playfully. The water dances, choreographed to international pop music. Yes, this really is just like standing outside the Bellagio in Las Vegas, watching the Fountain there. (Perhaps with a more heavily garbed crowd, a lack of open containers of alcohol and fewer displays of affection.) The Dubai Fountain is great fun. 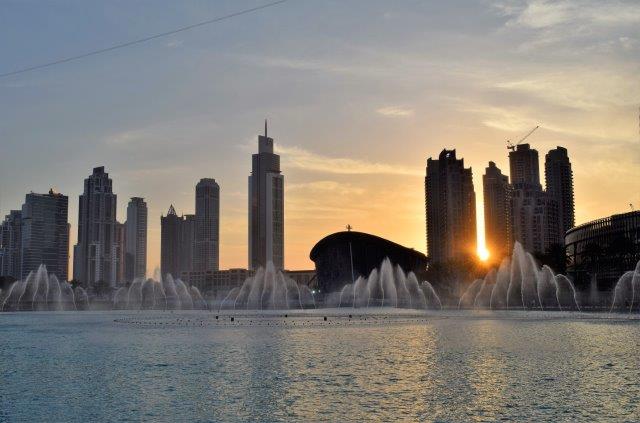 The Fountain at Burj Khalifa is one of the city’s most popular attractions. 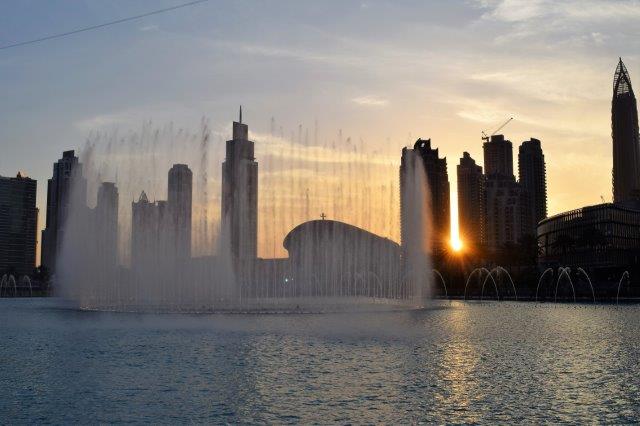 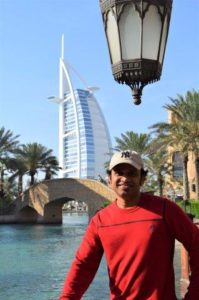 Sunil, my guide for the day.

Too soon, it was time to the return to the airport. (Where I still had time to relax, eat, and freshen up with a shower in Emirates Air’s Business Class lounge.)

I’m pleased with all I saw and I did and Sunil’s tour allowed me to see much more than I would have on my own.

Dubai’s growth is staggering. The city itself is truly a playground for all ages. People visit Dubai with their own little bucket lists—seaplane or hot air balloon rides, to drive a Ferrari, ski indoor, luxury hammam visits, and camel racing, quad biking, sand boarding or camping in the Arabian Desert. And more. 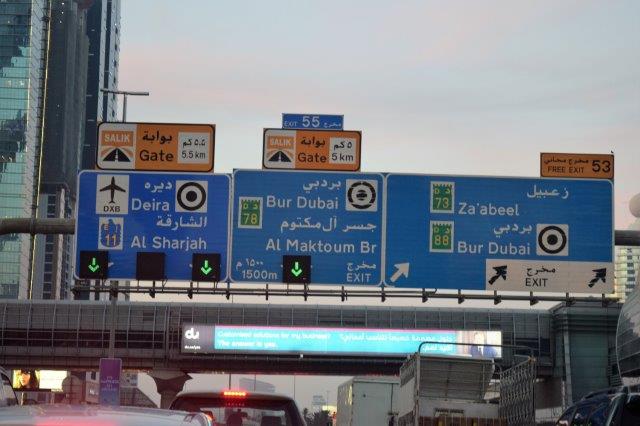 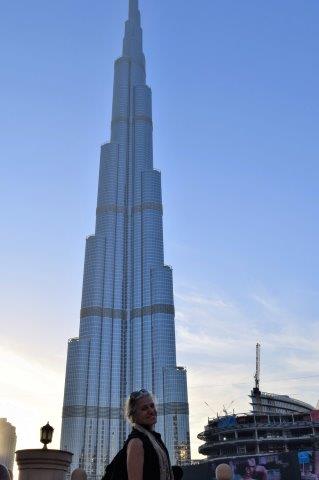