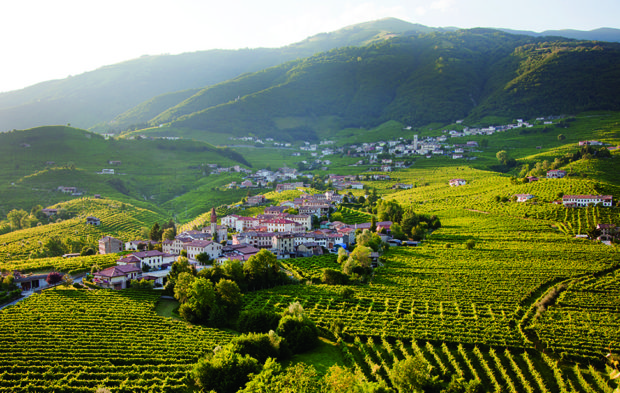 Everything You Need to Know About Prosecco

What signals a celebration better than raising a flute of sparkling wine? Whatever you pour, be it French Champagne, Spanish cava, German sekt, Portuguese or Argentine espumante, or Italian prosecco, sparkling wines are greeted with a smile. Italy’s prosecco has especially seen an increase in popularity, availability, and quality. Exports of prosecco have increased about 80% since 2009. Not one, but several are often found on restaurant menus. Most upscale bar programs offer a prosecco by the glass as well as creative cocktails using prosecco as the primary ingredient. (And not just Bellinis anymore!)

There’s no doubt I enjoy prosecco and love to pop open a bottle for friends and family. The numbers have spoken—you do too. Here’s everything you need to know about Italian prosecco.

Back to the Classroom 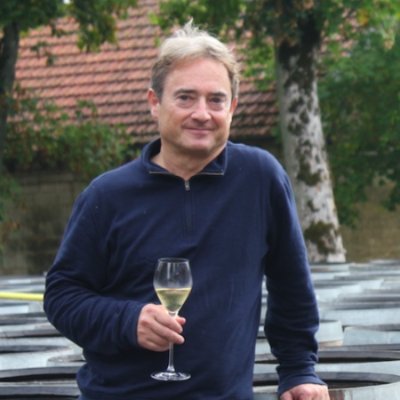 To learn more about prosecco, I attended a seminar led by wine and food writer, Alan Tardi. Mr. Tardi has authored two books on wine, writes for all the top wine publications, and is a wine educator. He’s also worked as a chef, sommelier, and restaurateur, and is the current U.S. Ambassador for the Conegliano Valdobbiadene Prosecco Superiore DOCG, the region in which  premier proseccos are made. He was in town for the Society of Wine Educators Conference.

For all the extra work, attention and investment on the part of prosecco producers in the DOCG, each of the wines we sampled is extremely affordable. All surprisingly range in price from $15.00 to $20.00, with the exception of one that was available between $24.00-$30.00. All but two are currently available in the U.S.

What is the Italian DOCG System?

The Italian wine appellation system was initiated in 1963. The system was modeled after the French system, which began about 30 years prior. In 1969, the first Italian appellations were established, one of which was the DOC where Prosecco was made.

Italy’s system, like the rest of Europe’s, considers region to be more important than grape varietal and will also disclose the region on the bottle label. In addition to giving the appellation, four designations (VdT, IGT, DOC, DOCG) define the (many) various controls that measure the quality of the wine from each region.

Wines made in the Denominazione di Origine Controllata e Garantita (DOCG) regions are considered to be of the highest quality. In August of 2009, Conegliano Valdobbiadene became Italy’s 44th DOCG.

How Large is the Conegliano Valdobbiadene Prosecco DOC/G?

Geographically, the DOC area covers more than 31,000 acres, and the DOCG is less than half that size, at about 14,600 acres. The DOCG includes the two towns of Conegliano and Valdobbiadene. (It’s only about a 30 minute drive from one end of the DOCG to another.)

The best (“grand cru”) of the wines are considered to be those grown in the Cartizze area of Valdobbidene. This area is only about 164 square acres. 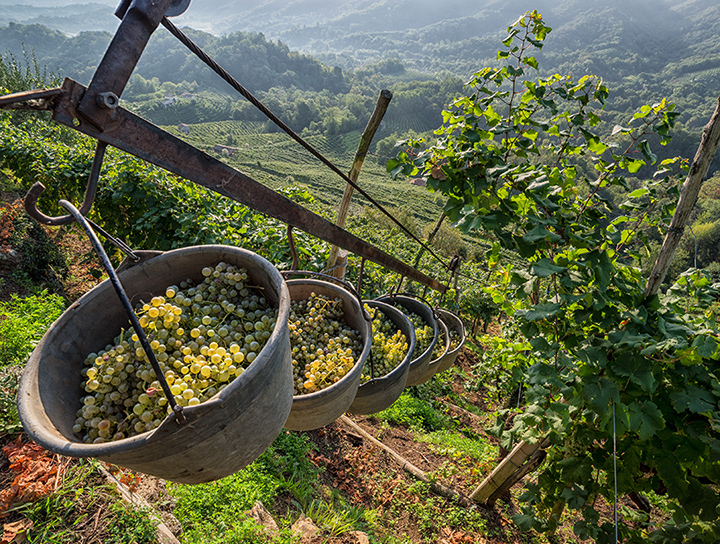 Well, it’s Italy—so it’s beautiful, of course! The climate for the entire region is mild, with an average year-round temperature of 54 degrees. The Dolmites mountain range creates a natural buffer to the region.

While most of the DOC areas have flat or relatively flat terrain, the DOCG terroir is almost all very steep. Grapes grown in the DOCG area are almost all by necessity handpicked—and is one reason for the superior quality of the wines. 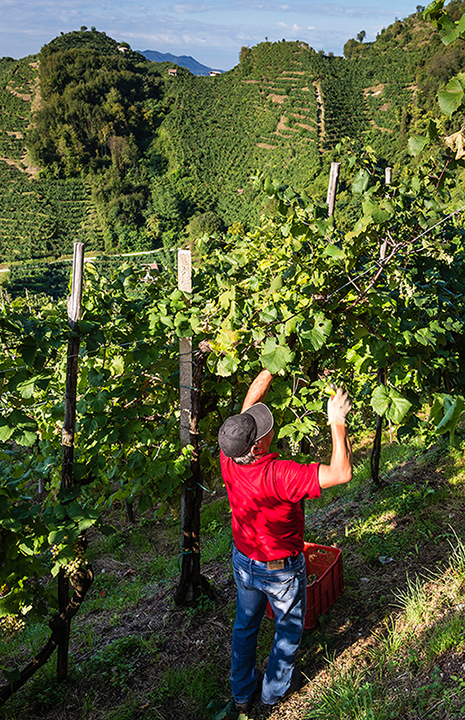 The steep terroir of the Conegliano Valdobbiadene Prosecco DOCG requires handpicking of most of the grapes. (Photo courtesy the DOCG)

Is Prosecco the Grape Used to Make the Sparkling Wine? 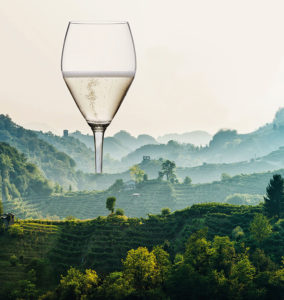 Is there a prosecco grape? Well, not anymore. What were referred to as prosecco grapes were actually a grape varietal called Glera. Glera is a white grape that is originally from the Karst area of nearby Slovenia. They were brought to Italy’s prosecco region and became known as Prosecco. But in 2009, when the Conegliano Valdobbiadene Prosecco DOCG wine region was designated, the grape became known by its proper name of Glera.

Must Prosecco be Made Only From Glera Grapes?

To be called prosecco, the wine must be made of at least 85% Glera grapes. The other 15% can consist of other grapes, but these grapes musts still be grown in the region. Verdiso, Perera, Bianchetta, and Glera Lunga are other varietals can be used.

How Many Wineries Make Prosecco?

Only 178 wineries exist as of this writing. But more than 3,400 vineyards are registered to produce grapes that supply these wineries.

How is Prosecco Made? 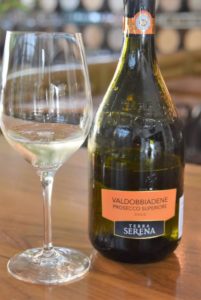 Prosecco starts out like any wine: the grapes are picked, sorted, and pressed. Yeast and sugars are controlled as the wine matures at low temperatures and undergoes fermentation. In the 1950’s and 1960’s, the region began using the autoclave, a steel pressure chamber that allows winemakers to control temperature as well as air pressure. This autoclave method creates a sparkling wine that can be stable and consistent. More recently, winemakers have been improving on their practices, and have found that adding a second fermentation results in an even better product. It’s one reason we’re seeing better and better prosecco.

While the vast majority of prosecco made use the autoclave, some will undergo a second fermentation in the bottle. With these, the sentiment (fondo) is either left in the bottle or removed by disgorging.

About 95% of prosecco made in the DOCG are spumante, which means “sparkling” or “foamy.” To be considered a spumante, there has to be a specific level. Frizzantes are semi-sparkling and will have about half the “atmospheres of pressures” in the bottle as spumantes. Tranquillos are still, or non-sparkling, proseccos and are the oldest version of this wine. These grapes tend to get the most attention, and can be some of the highest quality and most flavorful wines. 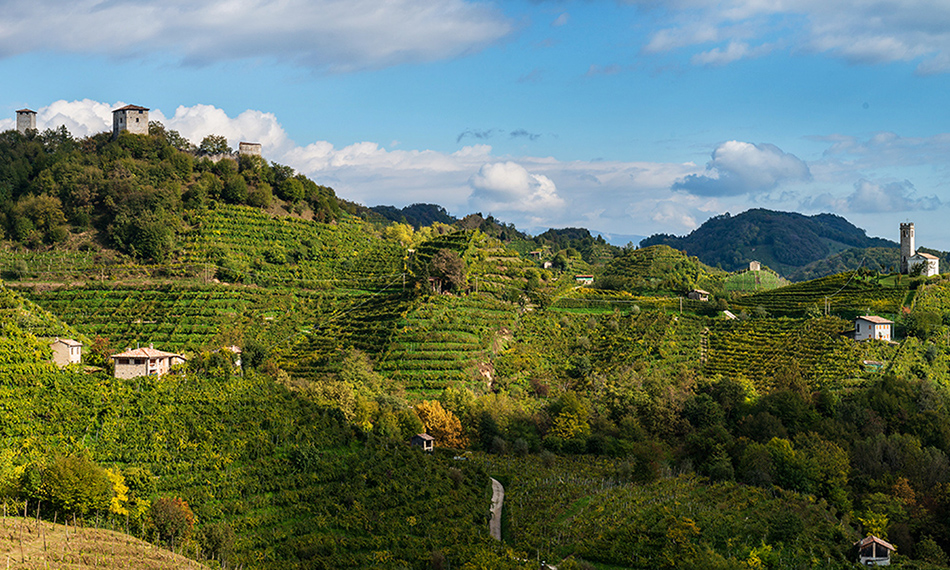 Prosecco can be sweet or not, with the sweetest labeled as Dry, those less sweet labeled as Brut, and those with the least sugars labeled as Extra Brut. The residual sugars of the prosecco we tasted ranged from negligible or 4 g/l, up to 21 g/l. These labels and the residual sugar levels shouldn’t be your only guide in choosing wine though. Of the wines we tasted, there were definitely wines that tasted less sweet even though the sugar levels were higher than another. Other factors influence how sweet or dry a wine will taste. This especially was apparent when I  had the chance to taste a range of the wines.

Our seminar tasting flight consisted of eight proseccos. Each was rated Superiore DOCG and made of 100% Glera grapes. It was a great opportunity to taste what could be done with the varietal from this very small Italian region.

The 8 proseccos we sampled during our class. (Photo by Nancy Zaffaro)

Here’s what we sampled: 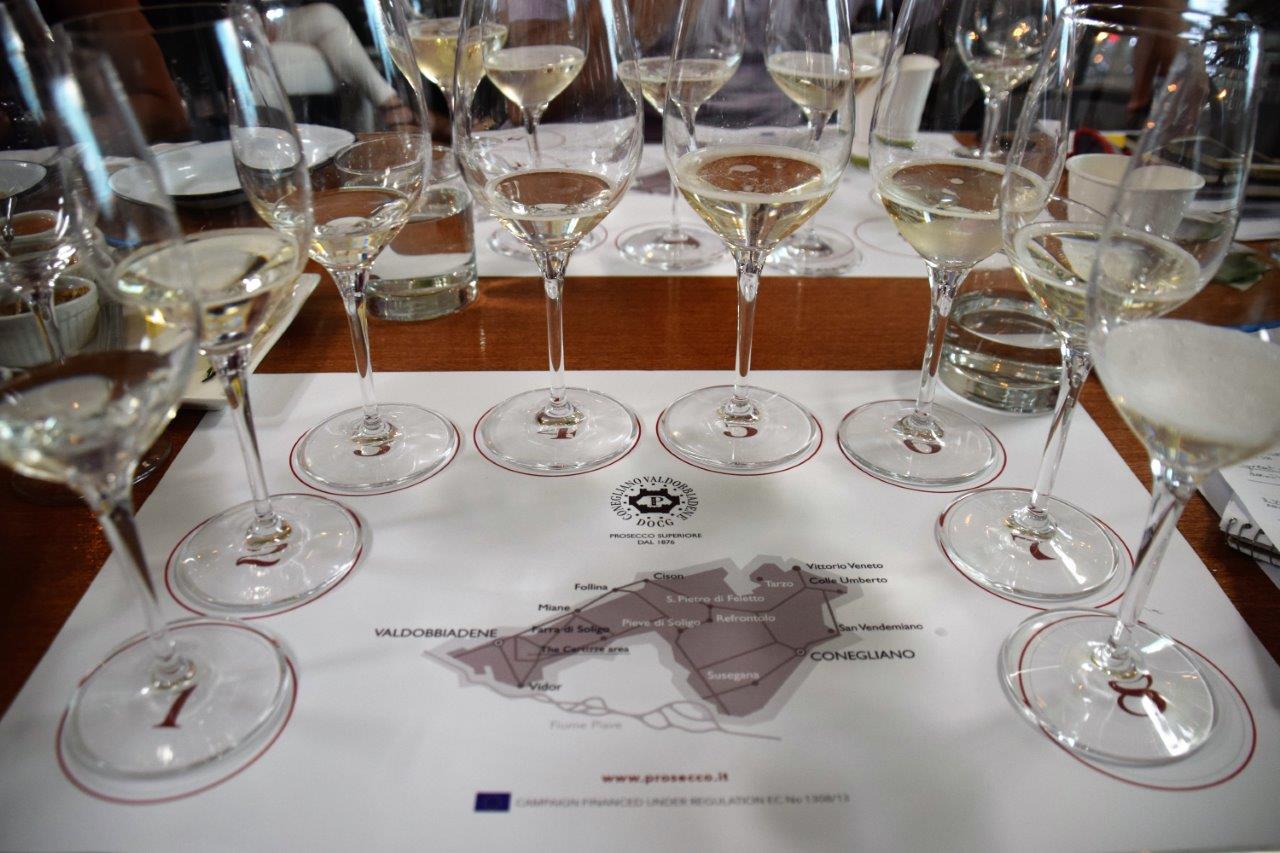 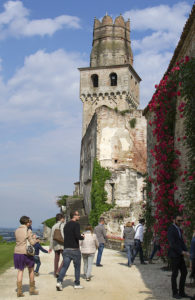 Add wine tasting to your trip to the Veneto region of Italy. (Photo courtesy the DOCG.)

I love Venice. I love the Piazza and Basilica di San Marco, the canals and bridges, Doge’s Palace, the Guggenheim, the food, neighborhoods and palazzos, the color and splendor of the gondolas, Venetian masks and Venetian glass, and of course, the Italian people. Don’t miss any of that on your trip to Venice.

But know that an exciting wine culture exists in the Veneto region. Extend your visit and cross over the Strada Regionale 11 Padana Superiore, the road that carries you to the mainland, and tour the Conegliano Valdobbiadene Prosecco DOCG wine region. You’ll find a very different and authentic experience!

Can’t get to Italy quite yet? Put on some opera, and enjoy a good bottle of Prosecco.