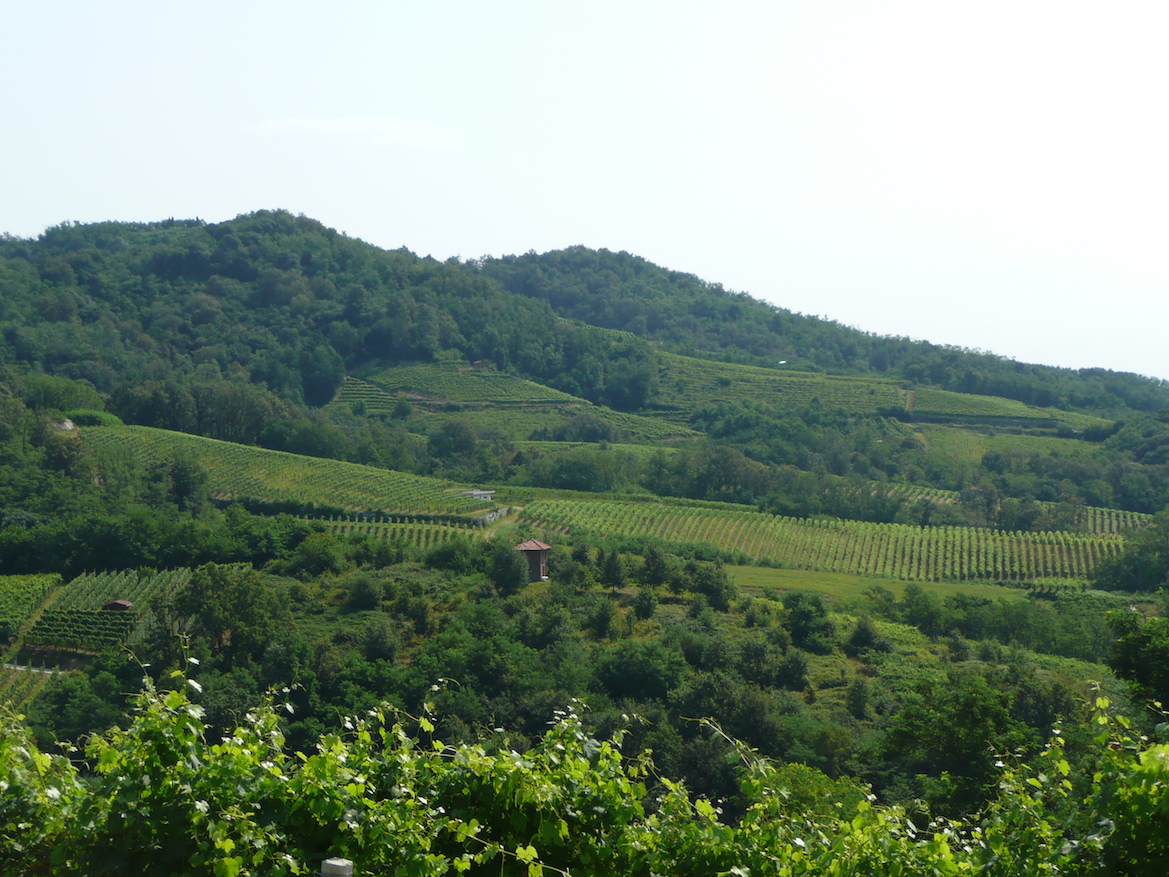 There’s a widely-held bias that Nebbiolo, to many Italy’s noblest red grape, reaches its zenith only when grown on particular hillsides in Piedmont’s Langhe region. Here it becomes Barolo and Barbaresco, dubbed the king and queen of Italian wines for their power and elegance.  Versions from other parts of the world have been patted on the head with a “nice try” attitude.  In the past few years, Nebbiolo-based wines from Alto Piemonte, especially those from Gattinara DOCG, have piqued international interest. Seizing the moment is Travaglini Estate Wines, Gattinara’s top-selling producer. 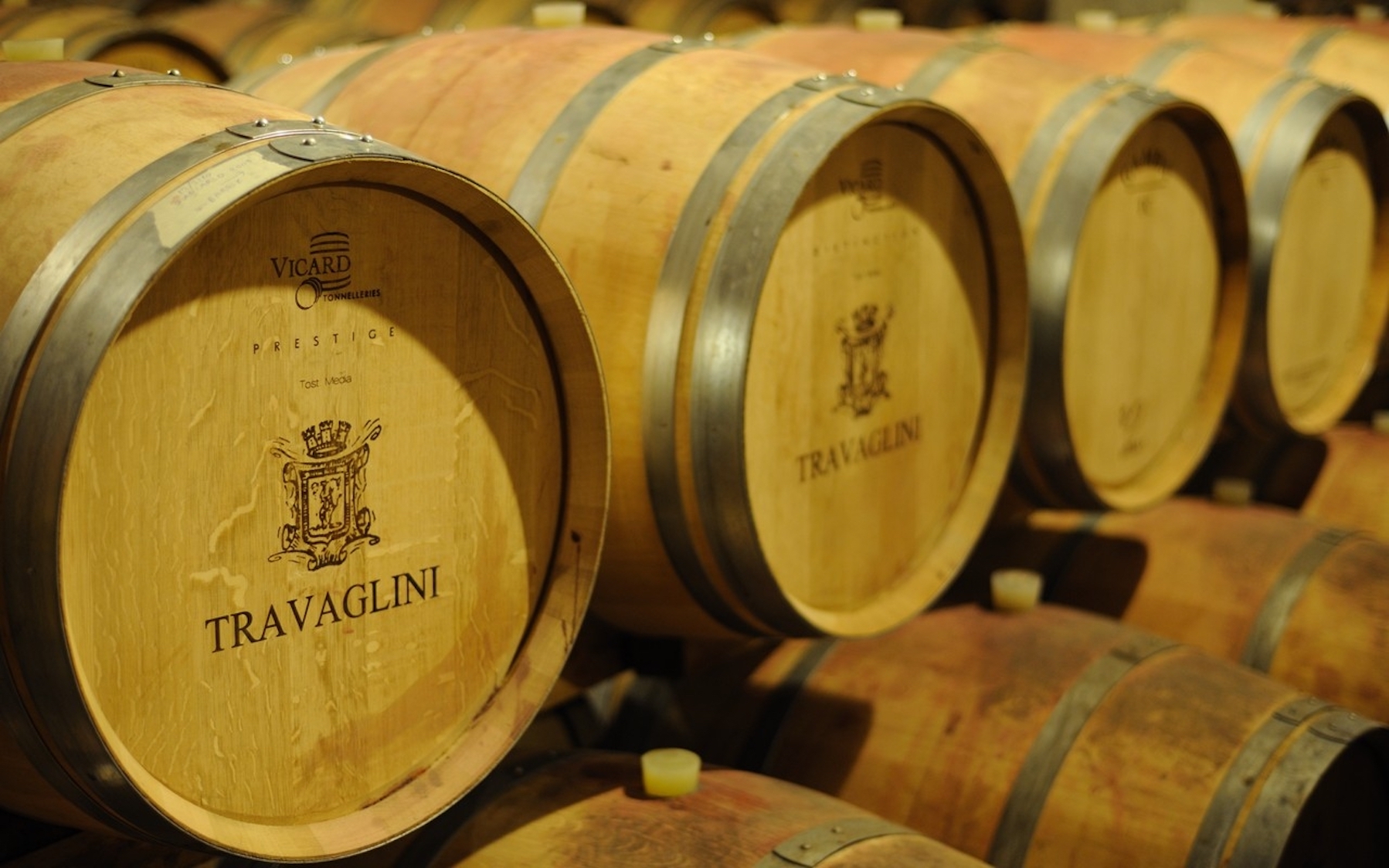 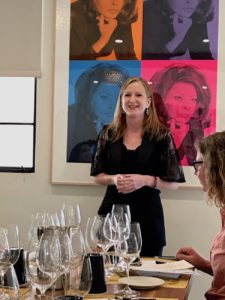 The charming mother-daughter team, Cinzia and Alessia Collauto Travaglini, introduced us to the region and to their family’s breathtaking wines. 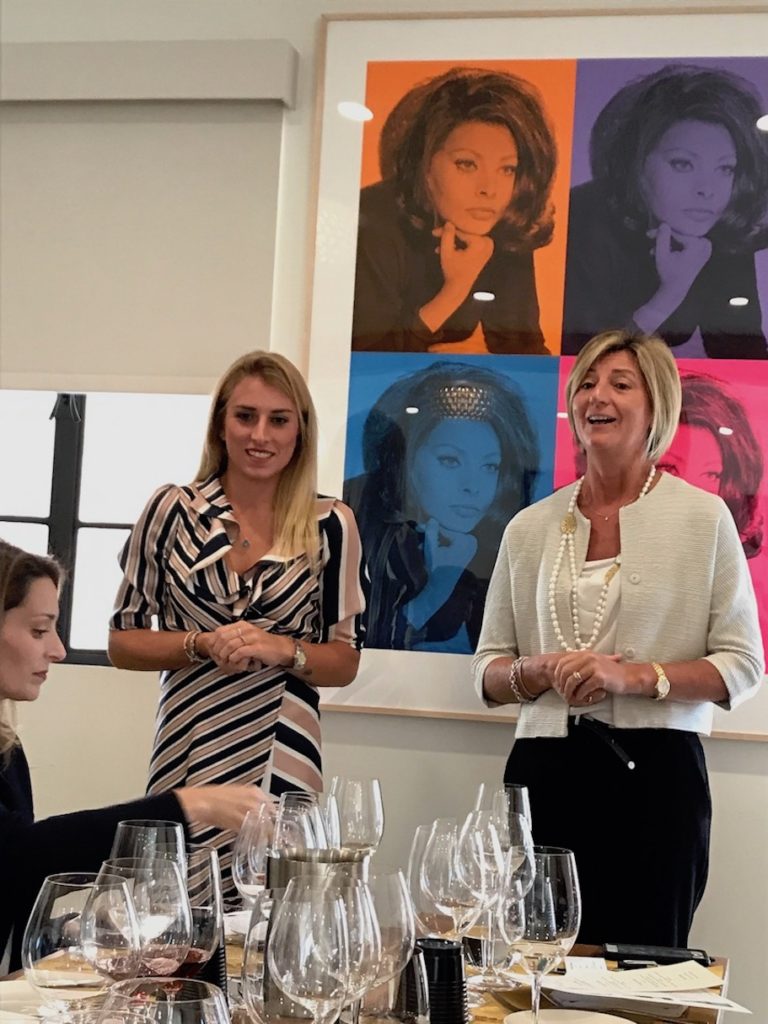 Alto Piemonte, about thirty miles west of Milan, is an umbrella term for ten tiny denominations, bisected by the Sesia River.  They lie nestled in the steep foothills of Monte Rosa, the Alps’ second-highest peak.  Small wineries dot the landscape along a route that spans about a hundred and fifty miles, north to south, clustering around the Verbania, Novara and Vercelli provinces.  Gattinara, the largest appellation, was accorded DOC status in 1967 and DOCG in 1990.  Regulations require the wines be at least 90% Nebbiolo. The rest can be a blend of up to 10% Uva Rara and 4% Vespolina. 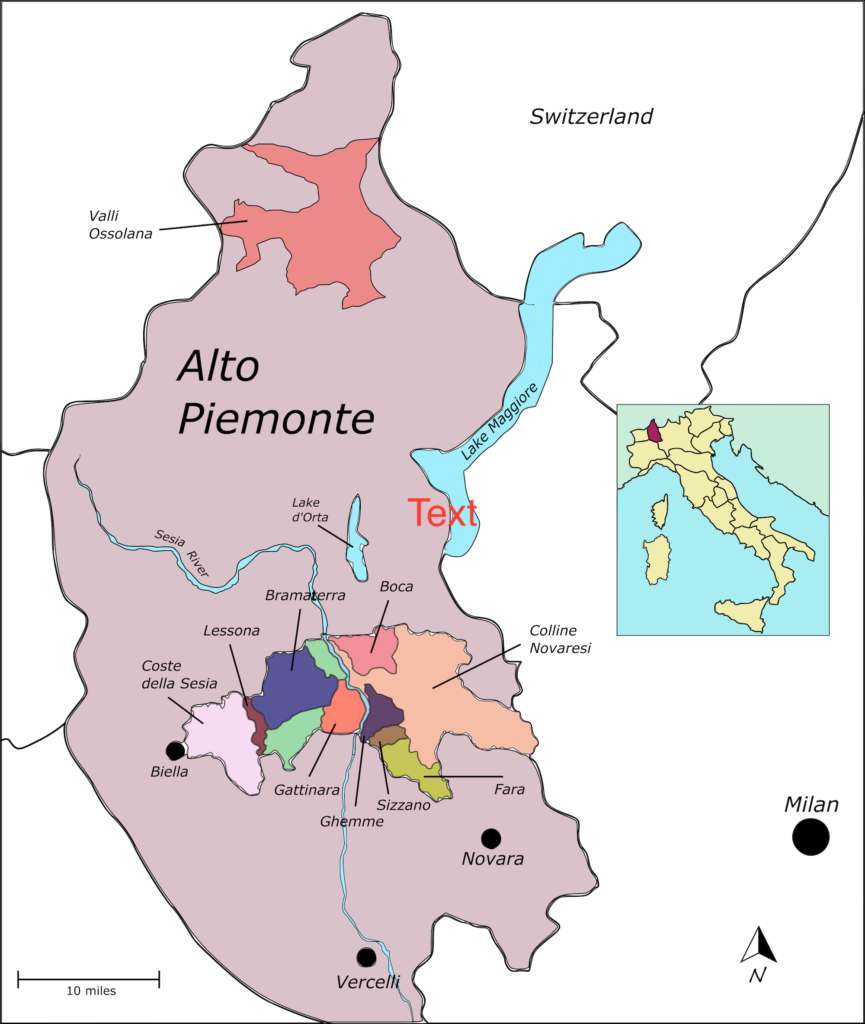 History of Nebbiolo in Alto Piemonte

It’s a tad ironic that Alto Piemonte is suddenly all the rage.  There are records of Nebbiolo, known locally as Spanna, being planted by Romans during the 2nd century BC. Gattinara was famed for its wine long before Barolo and Barbaresco held the spotlight.

In the 1500‘s, Arborio Mercurino, Grand Chancellor to King Charles V of Spain, and later Cardinal under Pope Clemente, was an avid champion. Sometimes credited with inventing the business lunch, he made it the star of meals for the royal court and high-ranking clergy.  At its peak, Gattinara was the poster child for Nebbiolo and the largest wine producing region in Northern Europe.

Its story is one of triumph, devastation, and resurrection. Viticulture flourished until the late 1800‘s, when vines were destroyed, first by phylloxera, then by a wrecking hailstorm in 1905.  Post WWII, flight from Italy’s economically depressed rural areas for work in the cities, left only 600 hectares under cultivation. 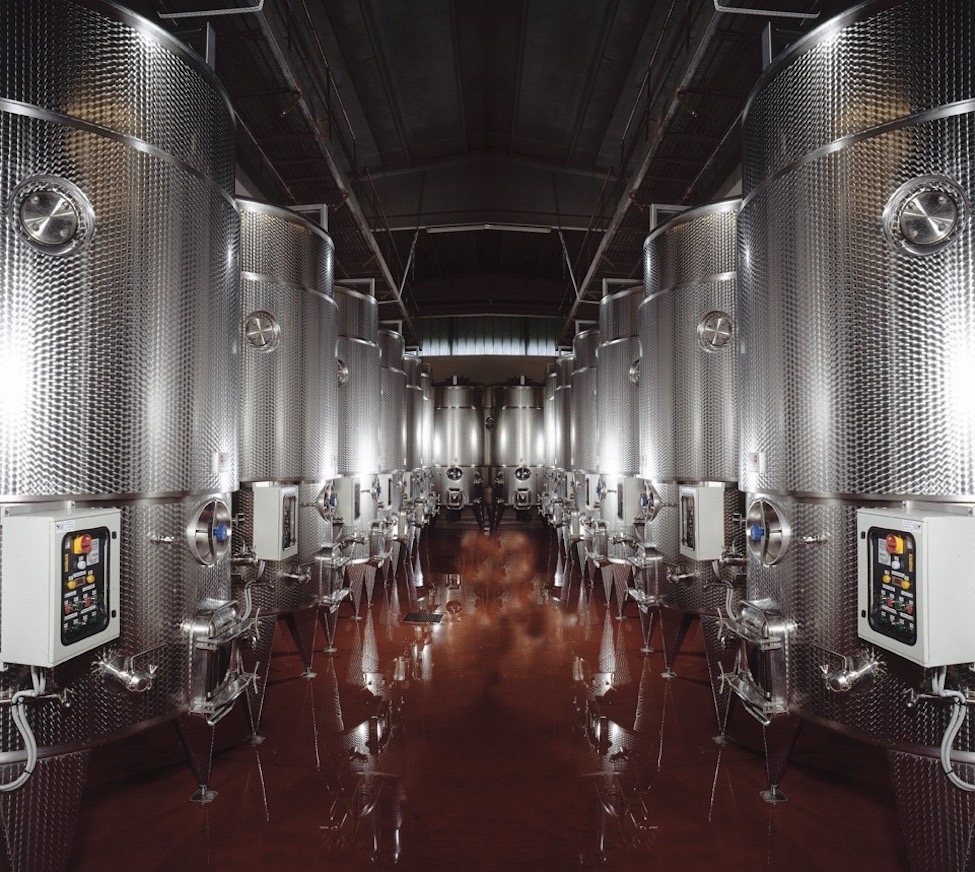 Four generations of Travaglini have led Gattinara’s resurgence, starting in 1920 with family patriarch, Clemente. Faith that his treasured hillside vineyards could produce world-class Nebbiolo pushed him to replant and expand. Son, Arturo, continued his father’s legacy. It was in 1958, though, when Arturo’s son, Giancarlo, got involved that major innovations began. He is considered a visionary, whose methods brought quality to the next level and influenced neighboring producers. 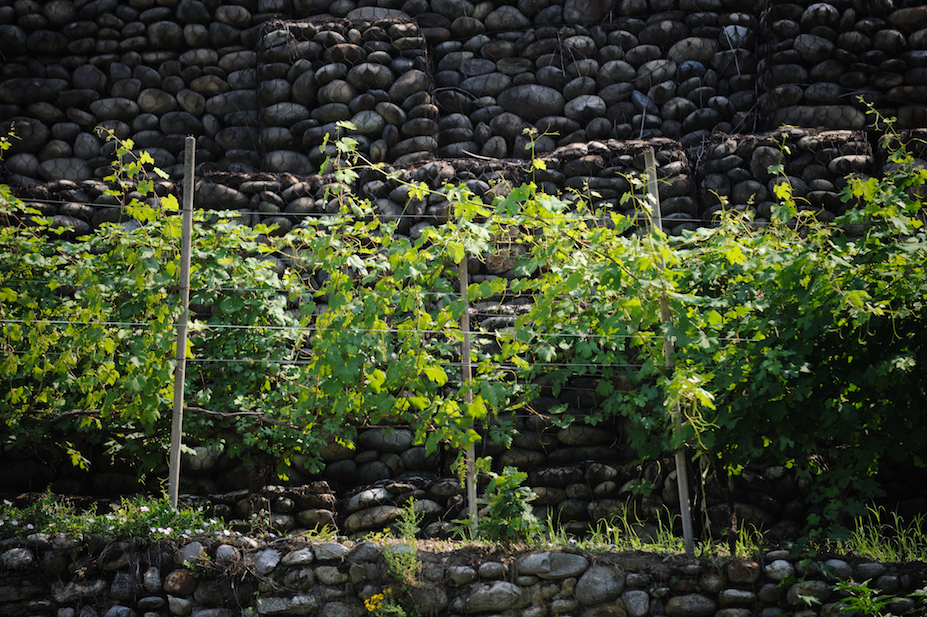 Giancarlo implemented the Guyot trellising system and partial use of neutral French oak barriques (barrels) for aging. He switched to hand-harvesting and higher density planting. Travaglini’s iconic bottle design was his invention. It’s concave midway down on the right side, ending in a slight protrusion at the bottom. Alessia shared that silly myths abound to explain the shape, “Some say it was made for the reigning Pope, who was left-handed. Another story contends there was a fire in the cellar, which melted the bottles. In reality, it catches the sediments formed by our long-aging wines, so they don’t need decanting.” 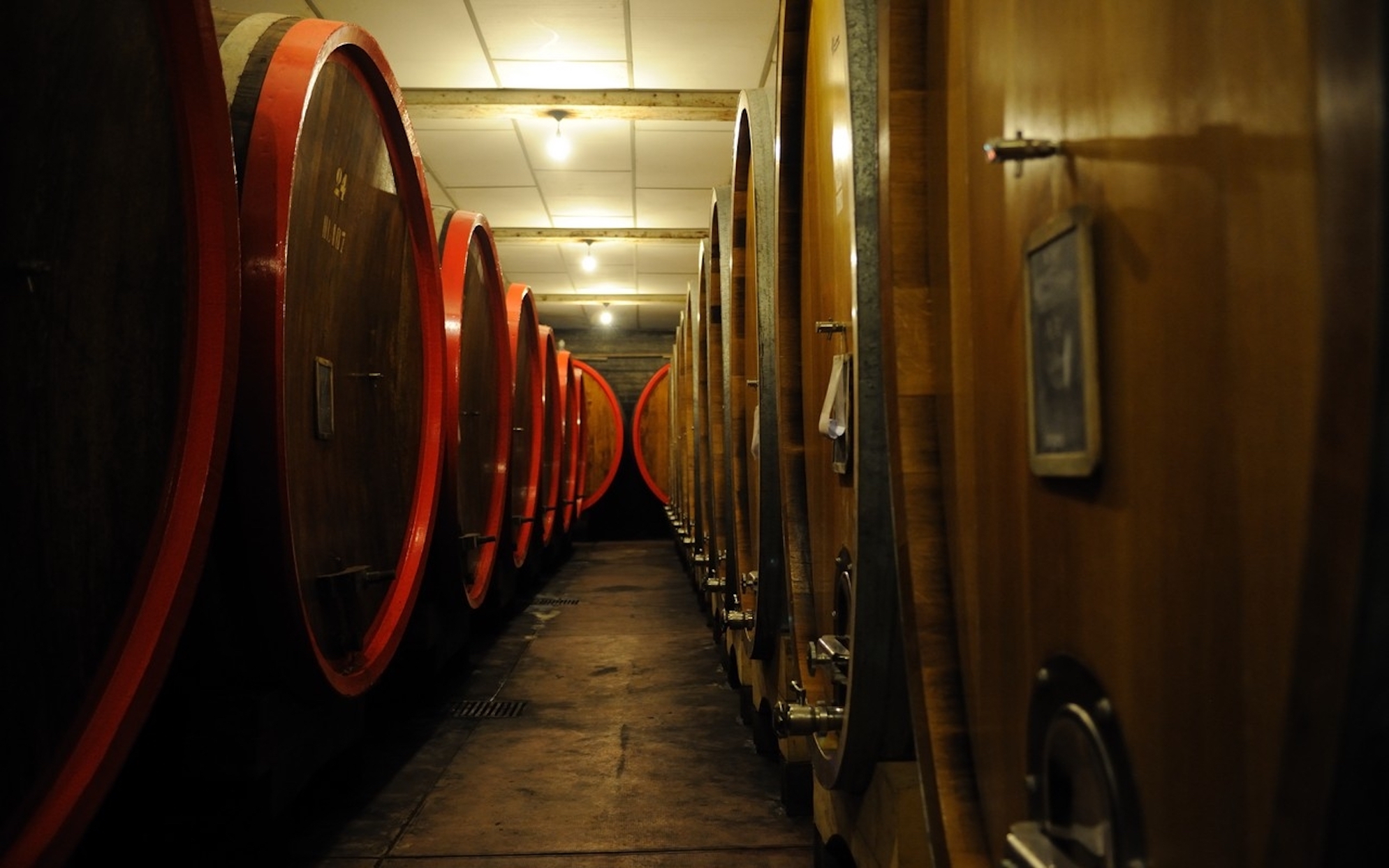 After nearly a century, the family’s passion for Nebbiolo remains strong.  Today, Cinzia, Giancarlo’s daughter is in charge of the winery, with husband, Massimo Colluato, as chief winemaker.  Daughter, Alessia, a certified sommelier, has a hand in every aspect of the business, from the harvest and winery operations to marketing. Since Clemente’s start selling wine in demijohns for local consumption, production has increased to about 12,000 cases per year.  Sixty percent is exported to forty-six countries. 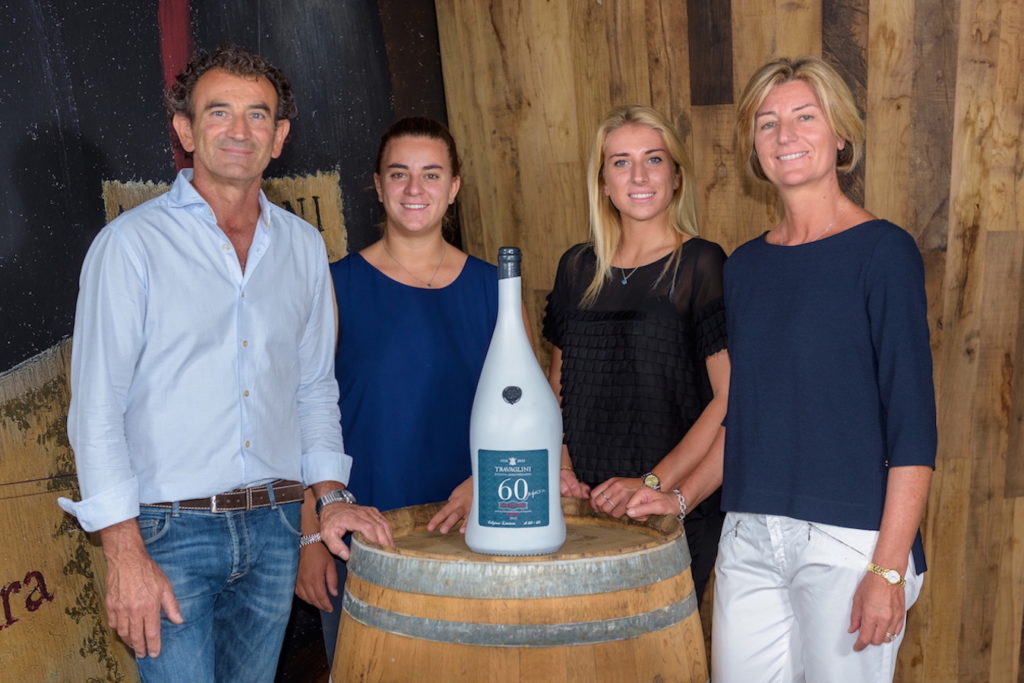 Gattinara’s geology and climate shape a taught, structured wine that can age for decades. Nearly three hundred million years ago, a supervolcano erupted in the Sesia Valley, spewing more than 186 tons of molten earth and ash. The result is a unique soil composition: rocky and iron-rich, with rose porphyry under granite.

Cinzia smiled like a proud parent when she shared, “This adds elegance to our wine.”

Low levels of calcium carbonate and magnesium, and a lack of calcium, contribute to high acids and tannins in a grape already known for them. The area enjoys a continental climate: very cold, somewhat dry winters, hot summers and moderate rain in Spring and Fall. Large diurnal temperature shifts aid balance. Sugars build up during the heat of the day, while cold nights also raise acids. Alcohol levels are moderate, usually 12.5-13.5%. 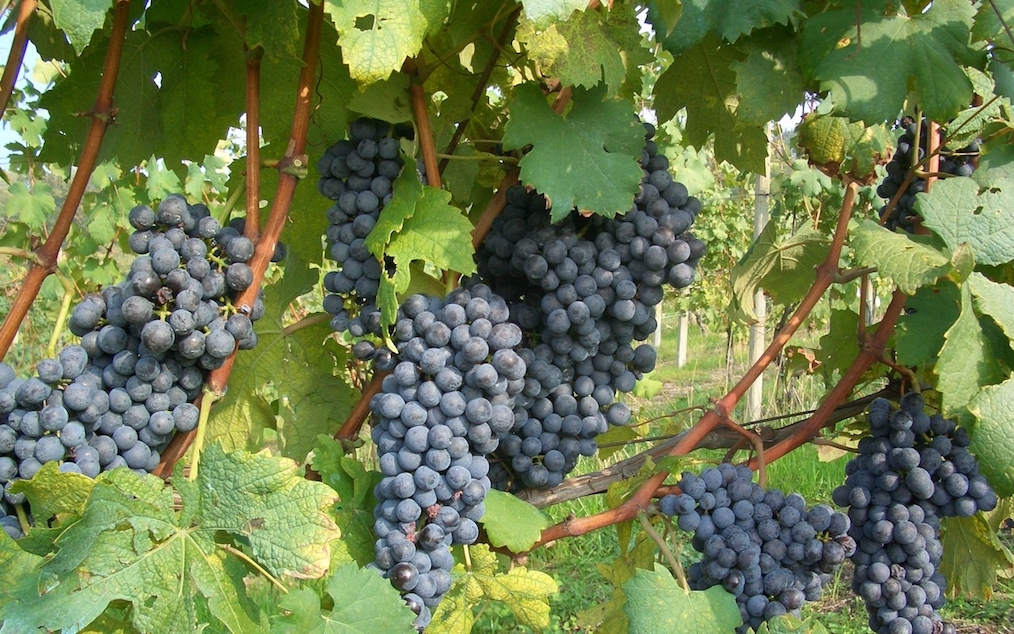 The Travaglini estate spreads across fifty-nine hectares of lush, green hills in the heart of Gattinara. Forty-four are planted to vine, mostly of Nebbiolo, with small lots of Uva Rara and Vespolina. Six to sixty-year-old vines stand on steep south and southwest facing hills, at  elevations of 1,050-1,575 feet. Planting density is determined by age, with younger vines at 5,000 per hectare and older ones at 3500. Always evolving, the Travaglini adopted organic and sustainable practices thirty years ago. 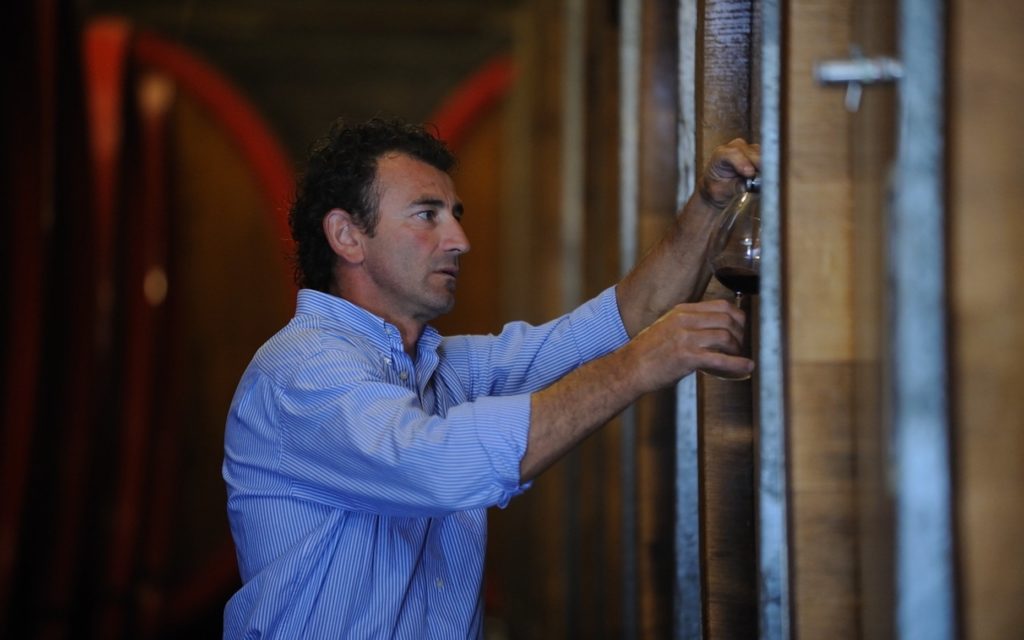 Massimo Colluato’s winemaking achieves the purest possible expression of grape and terroir. Fermentation is done in stainless steel tanks at controlled temperatures. Aging sometimes continues in steel only, but usually, in neutral Slovenian oak casks. The only exception is his Tre Vigne wine.  During the last year of aging, 20% percent of the juice is taken out of cask to age in French oak barriques, then is returned to the balance of the wine before bottling.  DOCG regulations require aging for at least 35 months, 24 of which must be in oak casks.  Riservas require 47 months, with 36 in oak. 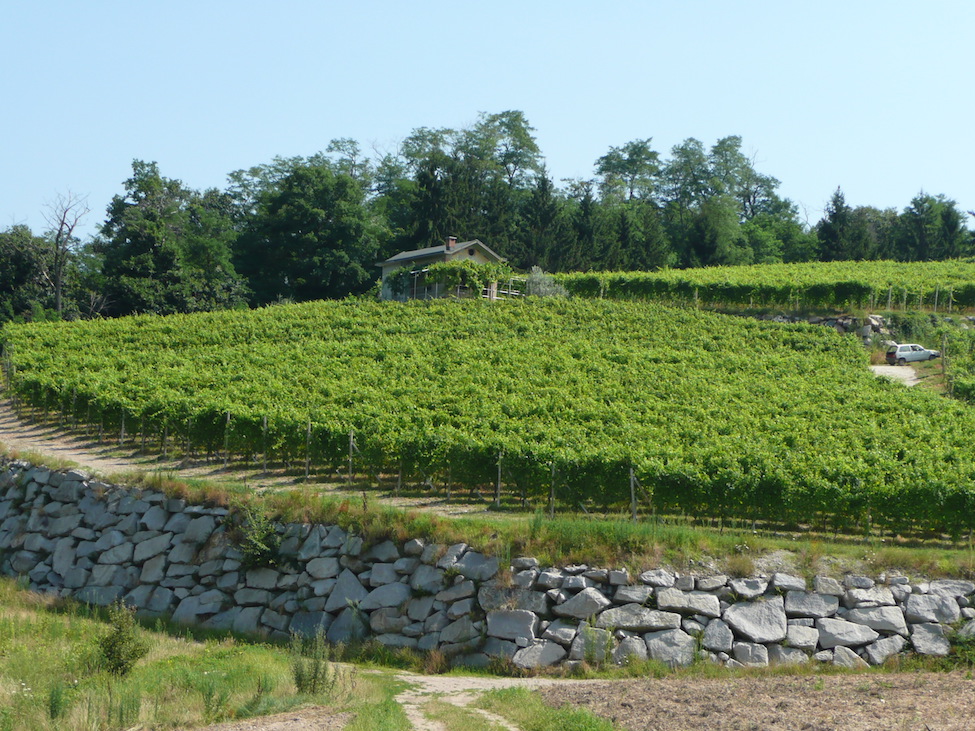 The wines we tasted are 100% Nebbiolo. The reds are full-bodied and graceful, with lengthy finishes. Across the board, they are fresh, vibrant, and highly aromatic with depth and earthiness.  Cherry, berry and baking spices, ending with licorice, violet and herbal notes prevail.  There are hints of the classic Nebbiolo “tar and roses.” With age, dried fruit and flowers, mushroom, coffee and tobacco come forward.

Younger wines are austere with hard tannins, yet still enjoyable now with aeration and the right foods. Hearty fare high in fat rounds them out.  Take a note from Alto Piemonte’s cuisine, rich with butter and strutto, or pork fat. Typical dishes include polenta served with a game or pork sauce. Mushrooms and white truffles feature prominently, served with risotto or the local super-eggy pasta, tajarin. You can’t go wrong with a well-marbled, charred ribeye, roast duck or a luscious, herb-crusted rack of pork. 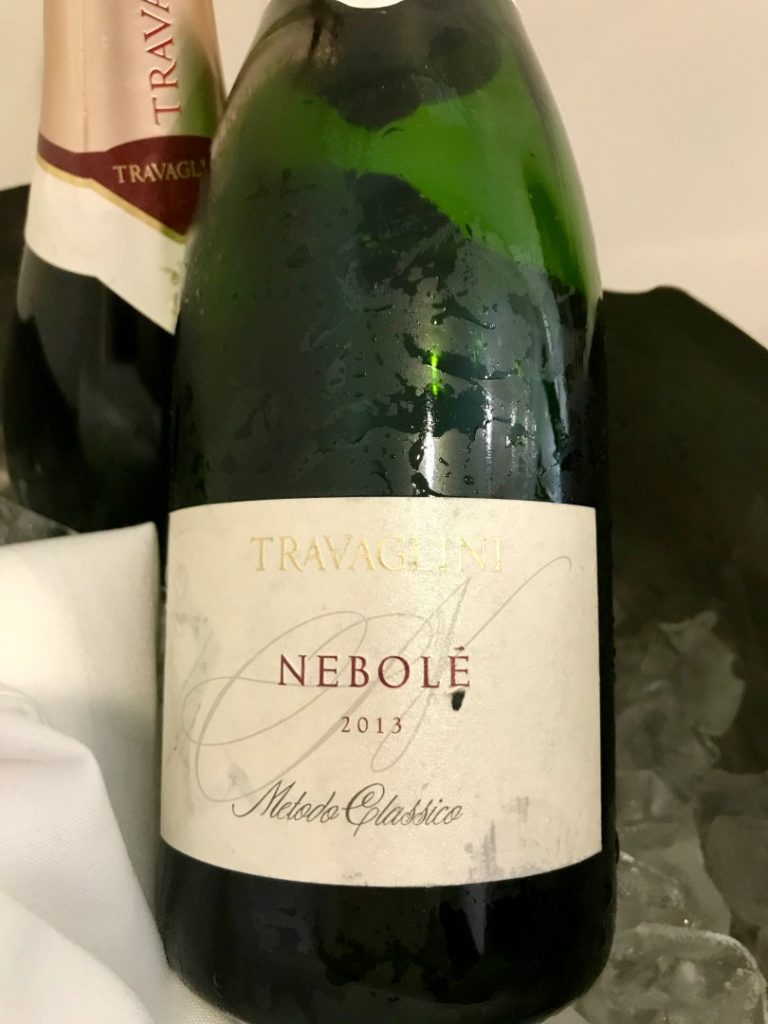 The Wines from Travaglini Estates 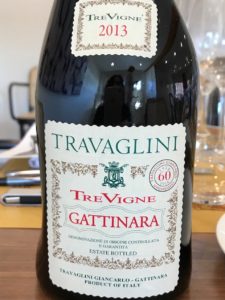 Nebolè 2013 extra brut. What a delicious surprise-a white Nebbiolo bubbly made in the Champagne method.  Only the tips of grape clusters are used for this lively sparkler.  Medium-bodied, with honeysuckle, bread dough and tree fruit.  Crisp and satisfying with a nutty finish.

Gattinara Tre Vigne DOCG, 2006. A flagship wine, composed of grapes from three “cru” vineyards: Molsino, Permolone and Ronchi, and produced only in the best vintages. Tre Vigne shows how waiting patiently for these wines to mature pays off.  Tannins are just beginning to soften.  Soul-warming scents of dried cherry, licorice, baking spice and mushroom, carry through on the palate, ending with leather and tobacco.

Gattinara Tre Vigne DOCG, 2013.  Showing the same promise as the 2006, but needs aging for the tannins to resolve. 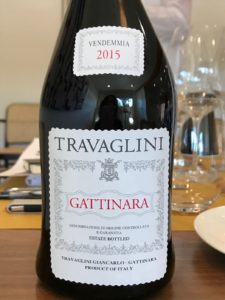 Gattinara DOCG, 2015.  A good place to start in the Travaglini portfolio.  It’s representative of overall style and more readily available in the US.  Bright cherry, plum and licorice leap from the glass. There’s a long herbaceous finish. 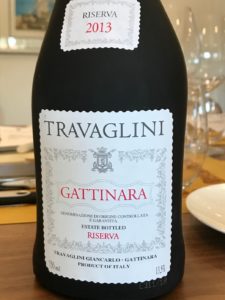 Gattinara Riserva DOCG, 2013.  A youngster poised for greatness.  Rose, herbs, and a whiff of menthol stand out with an undercurrent of clove.  Dried cranberry and cherry, fennel, a hint of tangerine and mineral notes open on the palate.

Il Sogno (The Dream), 2014, is a big, bold, appassimento-style wine.  Grapes are dried for 100 days, then put in steel tanks for 25-30 days, before 40 months in Slovenian barrels.  A more concentrated, slightly sweeter version of the Travaglini style.  Good for a cold wintry night.  Enjoy with a wild boar ragu or a slab of Gorgonzola. 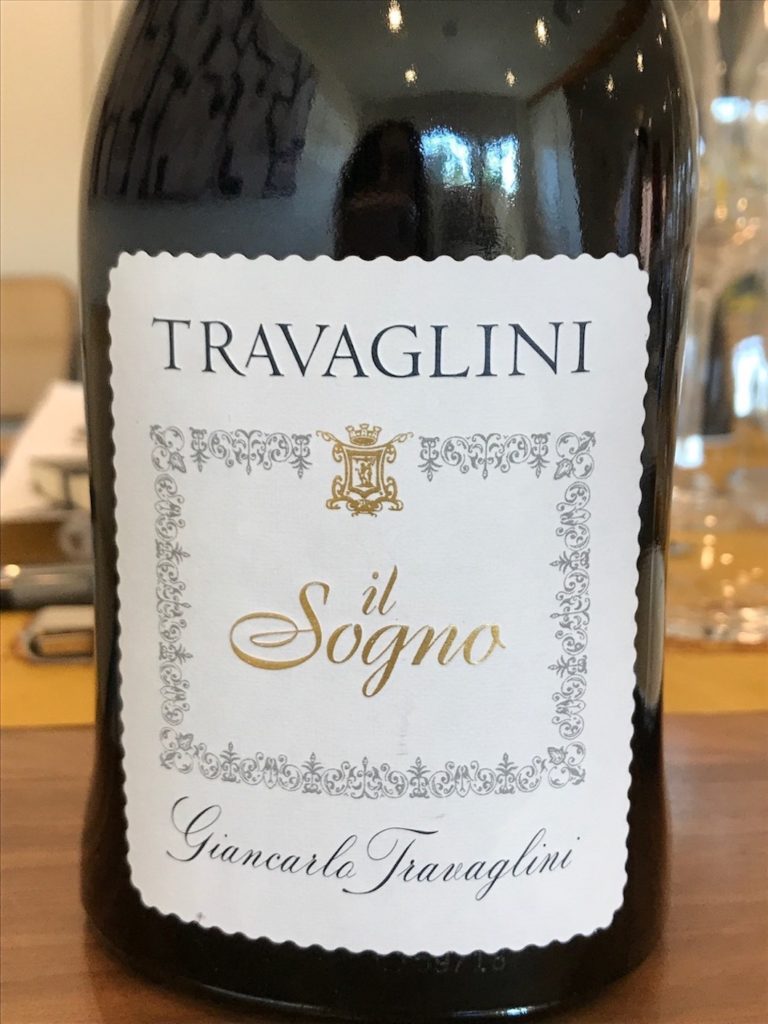 Il Sogno, or the dream

Roberta Rinaldi is a freelance wine writer in Los Angeles. She was hooked by her first sip of wine, a 1966 Domaine des Comtes Lafon Montrachet, one of the greatest ever made. Haunting memories of it set her on a quest to find equally magnificent wines, leading to a 20-year history in the wine business. She started in customer service at Wally’s Wine and Spirits, then became the Beverly Hills Wine Examiner for examiner.com, where she wrote about local wine events and personalities. Roberta is also the founder of Wine Noir, an event company (now closed), featuring California’s African American winemakers. In 2012, she attended the Symposium for Professional Wine Writers at Meadowood in Napa Valley and is a member of LA Wine Writers. Her day job is as a psychotherapist in Westwood, California. Ballet class is her happy place. roberta@vineprose

Top Ten Things to Do in Ho Chi Minh City

A thorough and thoroughly engaging article by a knowledgeable and gifted writer. Kudos!

I agree, Diane; very happy to include Roberta’s article on our site. And I have a special love of Nebbiolos, so I’ll be seeking out these wines! Thanks for reading and letting us know you enjoyed!