New Mexican Cuisine: The Where, Why and Wow 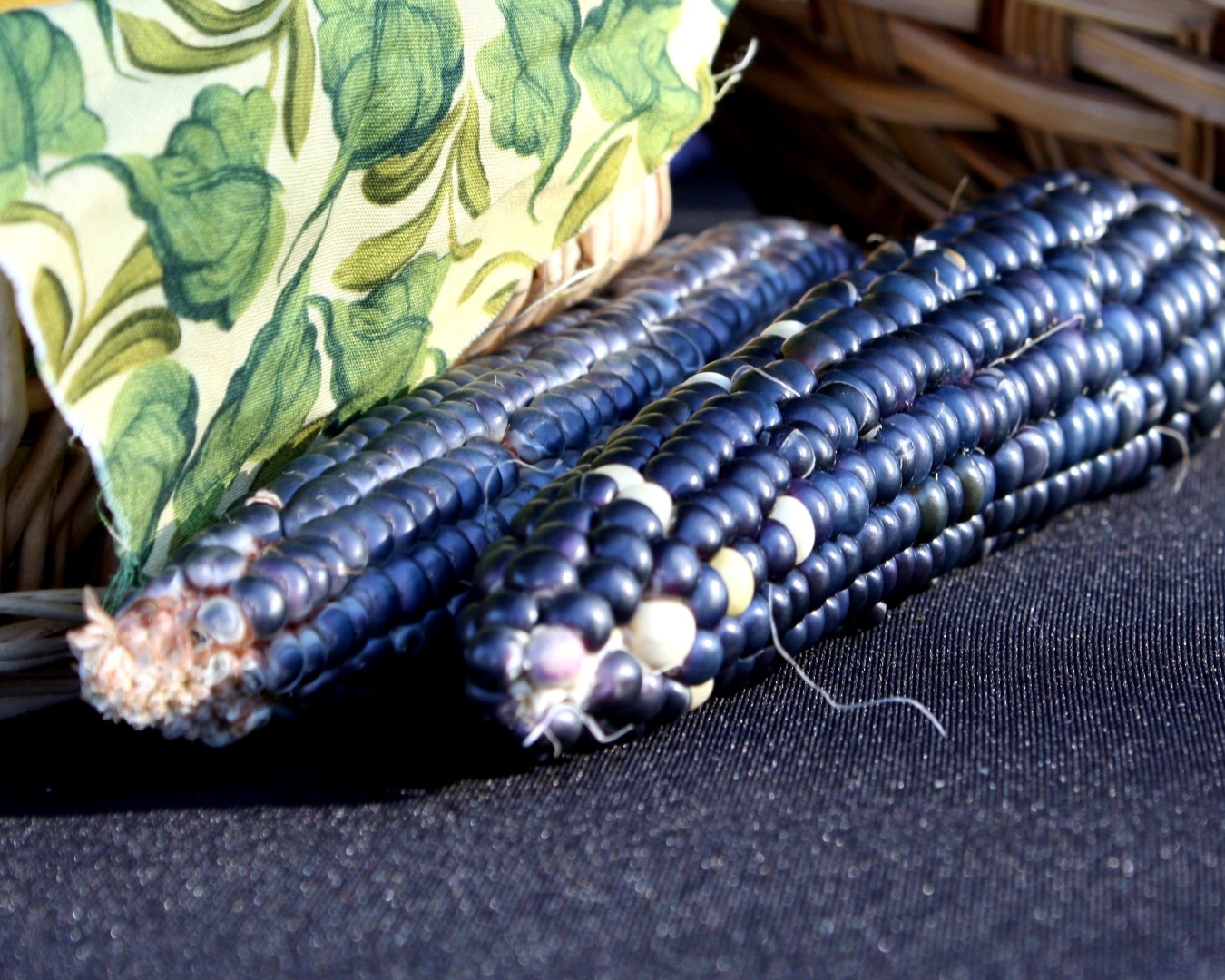 One of the most immediate ways to delve into a culture is through its food; and few places have as distinctive a culinary heritage as New Mexico. New Mexican cuisine is primarily known for its fusion of Pueblo Native American with Hispano Spanish and Mexican cuisine, with a dash of Anglo thrown in. The culinary treasures of New Mexico include some of the most intensely spiced dishes in the Americas.

The State Vegetables of New Mexico, chiles (the Spanish word for chili peppers, which is also used in English, along with chilis) and frijoles (beans) are two ingredients that ultimately represent the culinary contributions of the early Spanish settlers. In 1965, debate raged over the adoption of the vegetable choice into law, and it was decided that the two vegetables were inseparable.

Here, we look at New Mexican cuisine and the where, why and “wow” of eating like a native New Mexican. 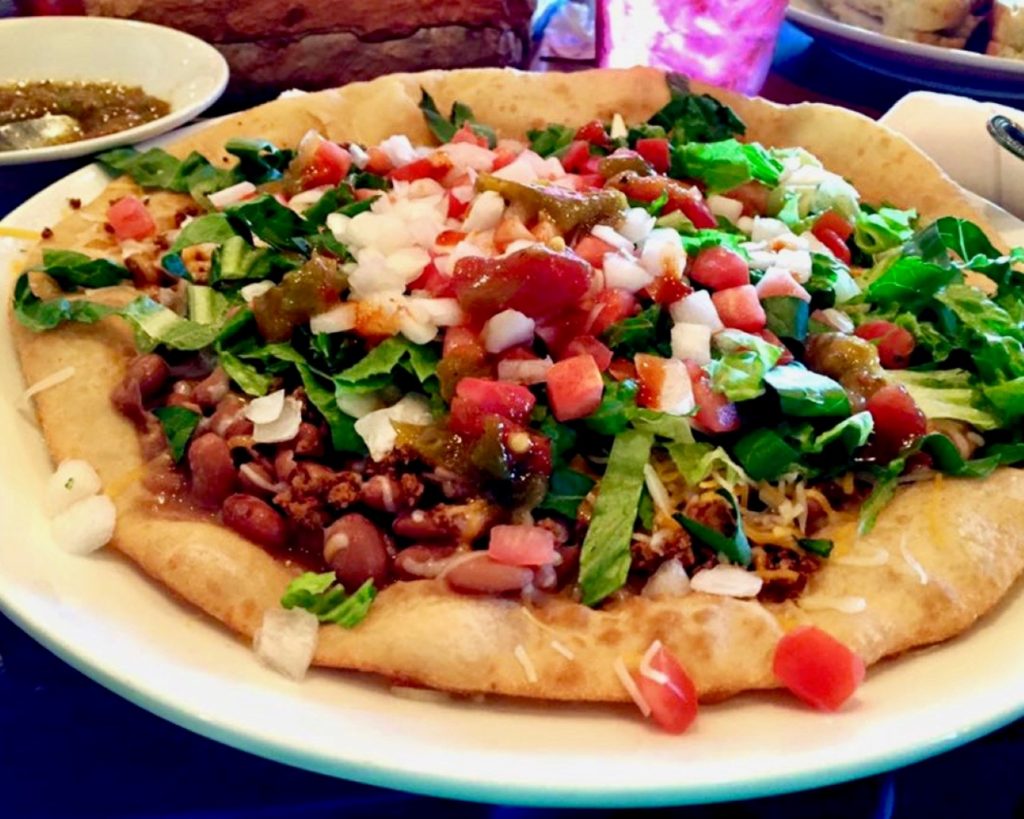 New Mexicans are as passionate about their food – especially their chiles – as they are about their unique history and culture.  When referring to chile they are talking about the long green chiles, and their more mature, mellow counterpart, red chiles.  They are not talking about chili powder blended with cumin and other Tex-Mex spices – and certainly not the concoction of spices, beans and meet known at Texas Chili con carne.

When the Spanish pushed north from Mexico into the area near Santa Fe in the early 1600’s, they found that the chile seeds they brought with them flourished in the climate.  Over more than a century of isolation, a distinctive cuisine developed that relied on the chile as the sole source of seasoning.

New Mexico Chile is the defining ingredient of New Mexican food. Blankets of chile sauce, either red or green smother nearly every traditional dish, from enchiladas to burritos to scrambled eggs. Chile is New Mexico’s largest agricultural crop.  The essence of New Mexico chile preparation is its simplicity. 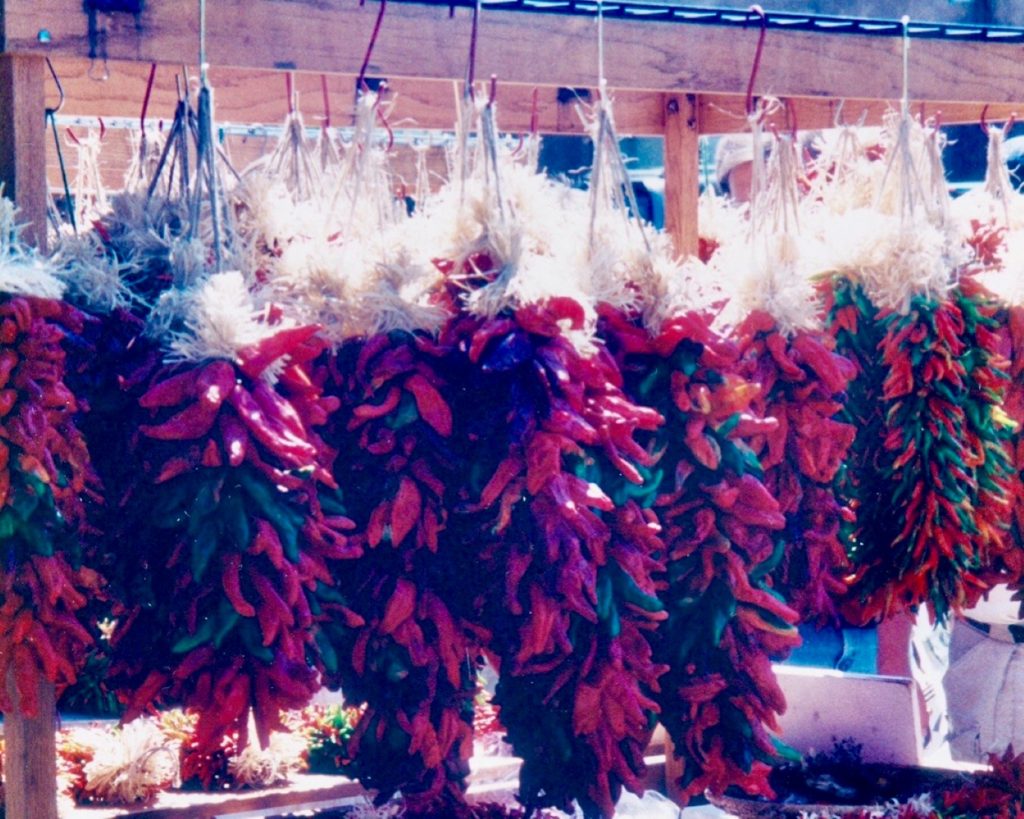 New Mexico green chiles can range from mild to extremely hot.  At harvest time (August through the middle of October) green chile is typically roasted, peeled and frozen for the year ahead.  New Mexico red chile is simply the fully ripened green chile pepper. As it ripens, it first turns orange and then quickly turns red. As it does, the skin thickens and fused to the inner fruit or “meat” of the pepper.  This means that the red chile must first be dried then blended into a puree.  The puree is not edible until cooked as red chile sauce. This is made by cooking the puree with garlic & salt.

Discerning native New Mexicans prefer sun-dried over oven-dried red chile, as the oven-drying process gives it a non-traditional smoky flavor and a dark maroon color.  Red chile peppers are traditionally sun-dried in bundles called ristras, which are a common decorative sight on porches and in homes and businesses throughout the Southwest.

The New Mexico official State Question is “Red or Green?” This refers to the choice of red or green chile with an entrée.  “Christmas” is a request for both (one side covered with green, the other with red) New Mexico red and green chile have such a rich and distinctive flavor that traditional preparations require few additional flavoring ingredients; the essence of New Mexico chile preparation is its simplicity.  While they’re made in roughly the same fashion, green and red sauces differ surprisingly in taste and texture.  Whisked up with the chopped bits of green chile, green sauce has a vegetal, grassy heat, while red tastes earthier and sweeter.

Regional Cooking of the American Southwest

Jane Butel is the internationally recognized authority on the regional cooking of the American Southwest. A cookbook author & teacher, she is credited with starting our nation’s love affair with this cuisine from her first cookbook, Cocinas de New Mexico in 1961.  I had the pleasure of spending time with Jane in her kitchen in Corrales, New Mexico where she teaches cooking classes in her fully outfitted professional kitchen. Her kitchen is complete with a cast iron tortilla press and comal, a heavy smooth flat griddle, used to bake tortillas, roast chiles, tomatoes and onions.

I asked Jane how New Mexican cuisine differentiated itself from Tex-Mex cuisine, and what makes it special. She explained New Mexican cuisine developed in fairly isolated circumstances, which has allowed it to maintain its indigenous, Spanish, and Mexican identity.  It can be easily distinguished from other Mexican and American cuisines, due to its emphasis on New Mexican spices, herbs and flavors; especially red and green Mexico chile peppers. 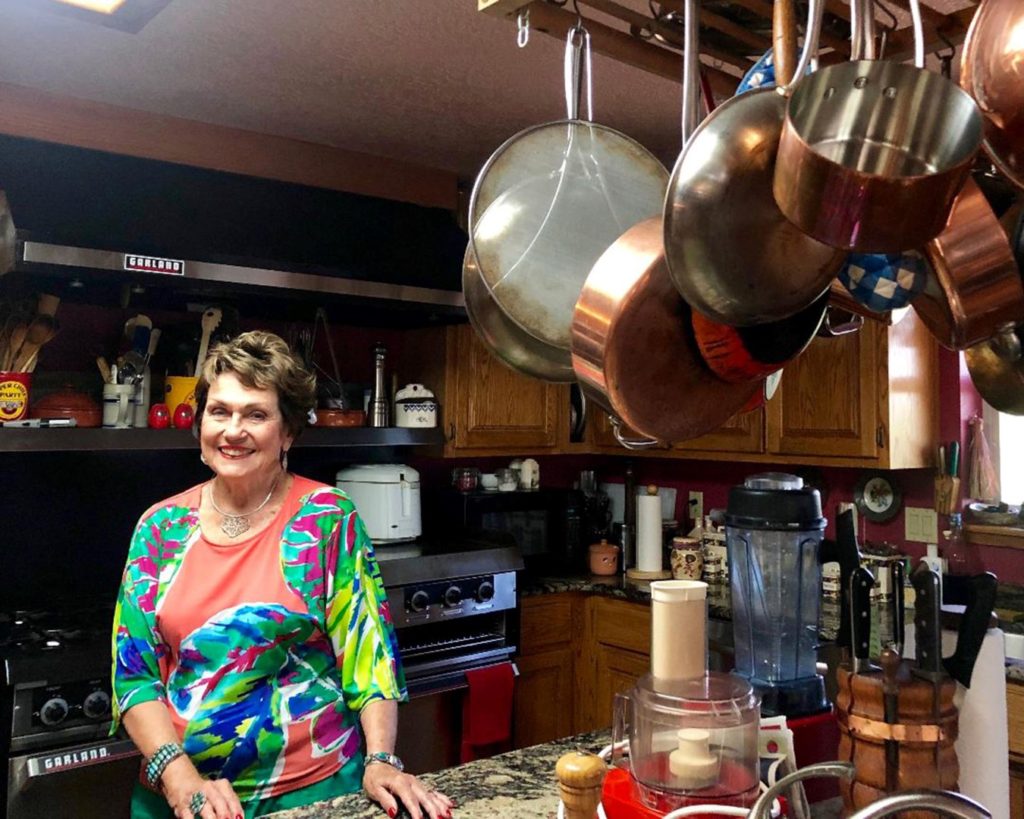 Jane Butel in her kitchen (Photo by Sharon Kurtz)

Three ingredients are the historical basis for all New Mexican cuisine:  Corn, beans, and squash, collectively known as the “Three Sisters,” were the staples of North American agriculture as early as 7000 BC. The Three Sisters are the three main agricultural crops of various Native American groups in North America:  winter squash, corn, and climbing beans.

The Signature Corn is not Yellow, it’s Blue

Corn tortillas, corn tortilla chips, and masa are the foundations of many traditional New Mexico dishes.  Unlike the sweet yellow and white varieties prevalent throughout the other parts of the country, the corn traditionally grown by the Hopi and Pueblo peoples of New Mexico was blue, known for its nutty quality. Blue corn improves everything, from tortillas to muffins to pancakes.   Common traditional dishes include stacked enchiladas, tamales, chile rellenos, and posole – a pork and hominy stew.

Beans. Dried pintos are the go-to bean throughout the Southwest. Slow-simmered on the back of the stove, eaten whole by the bowlful or drained of liquid and spooned out as a side dish.

Squash. Though not as common throughout the region today as its sisters, squash is still a historically important food source.  Calabacitas is the staple fresh vegetable dish.  Meaning “little squash”, zucchini or other thin-skinned squash is sautéed with corn and chopped green chile.  You’ll find it as a popular filling for vegetarian burritos, tacos, and as a stand-alone side dish. 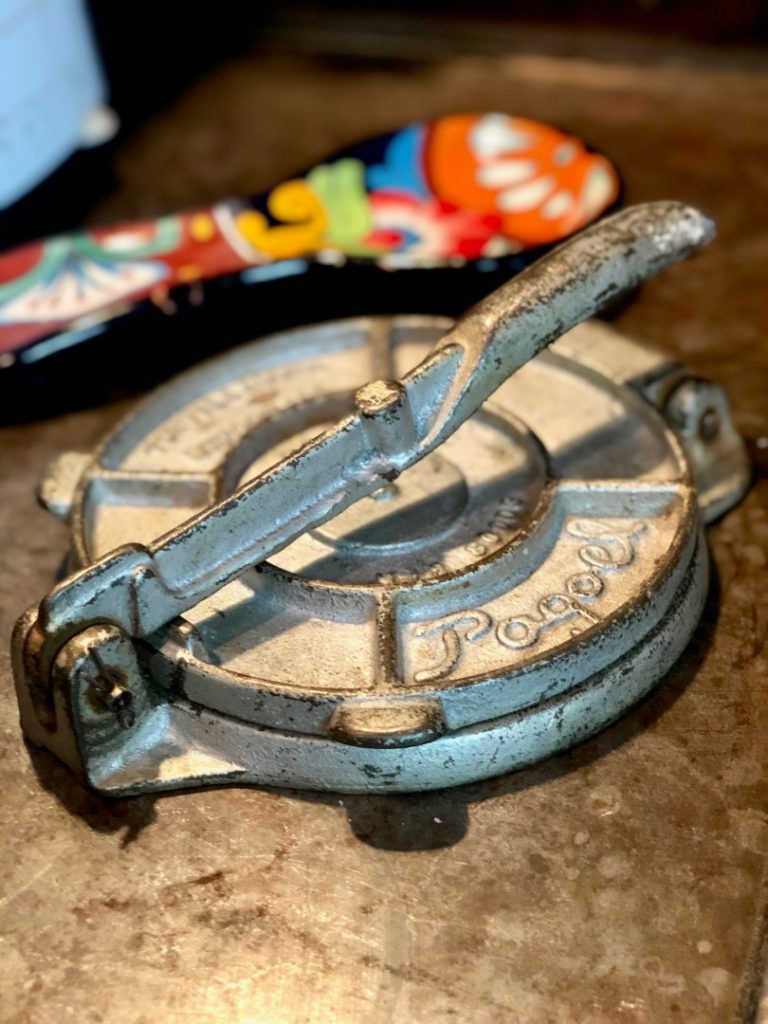 Albuquerque has literally hundreds of restaurants in the area serving traditional New Mexican food.  Here are three of my favorites:

El Pinto, 10500 Fourth St. NW, Albuquerque, (505) 898-1771. El Pinto is located in the beautiful North Valley making the best salsas and sauces in the world. They partner with local farmers for the best organic handpicked chiles in the state. The entrance itself is gorgeous, tucked amongst the tall cottonwoods, with entry portal and long chile ristras hanging to greet guests.  Plates like stuffed sopapillas (deep fried puff pastry) cheese chile rellenos, and tamales among the specialties. 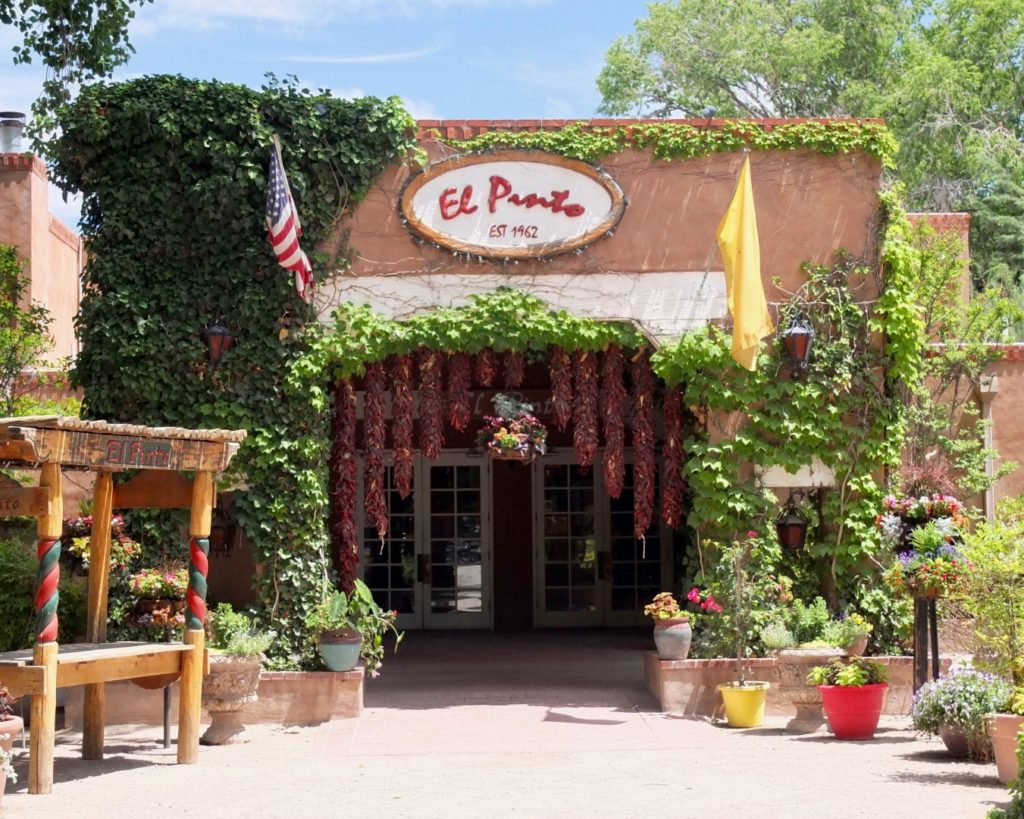 Sadie’s of New Mexico, 6230 Fourth St. NW, Albuquerque, (505) 345-5339. Family owned, with recipes passed down for generations, the range of options on the menu at Sadie’s is dependably delicious. You can’t go wrong with the combination plate or the stuffed meat chile rellenos smothered in red or green chili sauce, carne adovada, and green chile stew.

A Mexican combo plate at Sadie’s (Photo by Sharon Kurtz)

Horno-baked pizzas are a specialty, made in their outdoor wood fired authentic adobe oven. 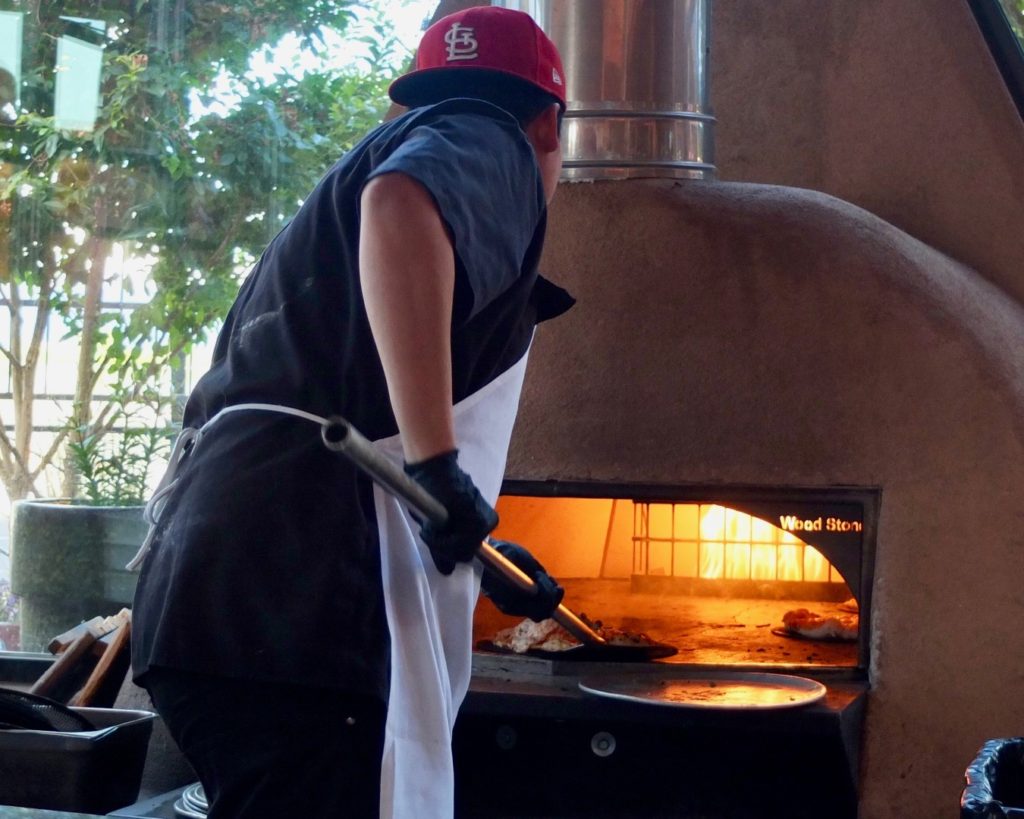 Santa Fe’s New Mexico culinary scene is full of flavor and based on the freshest locally produced ingredients with world renowned eateries to choose from, but two of my favorites are:

The Shed, 113 ½ E. Palace Ave, Santa Fe, (505) 982-9030. The Shed is a long-time fixture in Santa Fe and renowned for traditional New Mexican cuisine. An award-winning historic landmark, and recognized by the James Beard Foundation, the stacked blue corn cheese enchiladas are legendary along with corn chowder and soft chicken tacos. 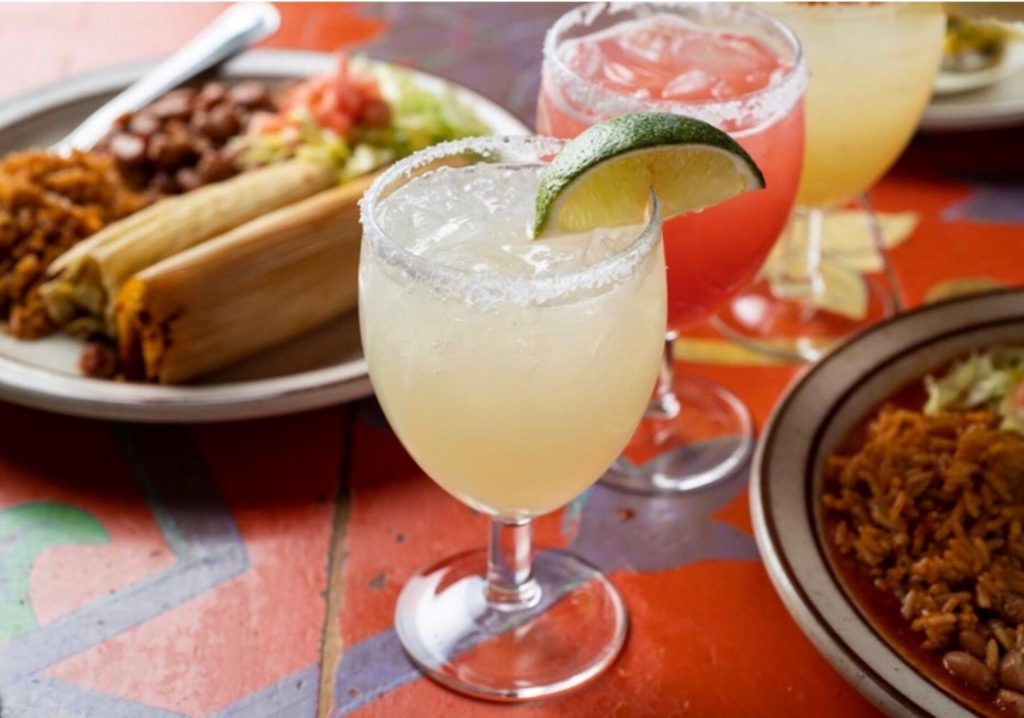 Tomasitas,  500 S. Guadalupe Street, Santa Fe, (505) 983-5721. Tomasitas is known to serve the best red and green chili and Margaritas in town.  A family owned restaurant for over 40 years with crowd-pleasing choices being burritos, quesadillas, tortilla soup, and green chile hamburgers to name a few – you really can’t go wrong at Tomasitas.

Parting Thoughts About New Mexican Cuisine and The Land of Enchantment

New Mexico has fully embraced the concept of celebrating regional New Mexican cuisine.  New Mexicans are proud of their agriculture and the history behind their dishes. Chilies are not just produce; they are a way of life. The chile is inseparable from the landscape of New Mexico. Whether it is the aroma of roasting green chiles in the fall or red chile ristras hanging from the portals throughout New Mexico, generations of locals have chosen to honor them with great exuberance.  The State question after all is, “red or green?”

-All photos by Sharon Kurtz.

Sharon Kurtz is a freelance travel writer who shares her passion for travel and food by exploring unique customs, culture and flavors from around the globe. She lives in Dallas, Texas with her husband and three dogs, but her carry-on is always packed ready for the next adventure. Follow her on her travels on Instagram and Facebook.

A Weekend of Art in Columbus, Ohio