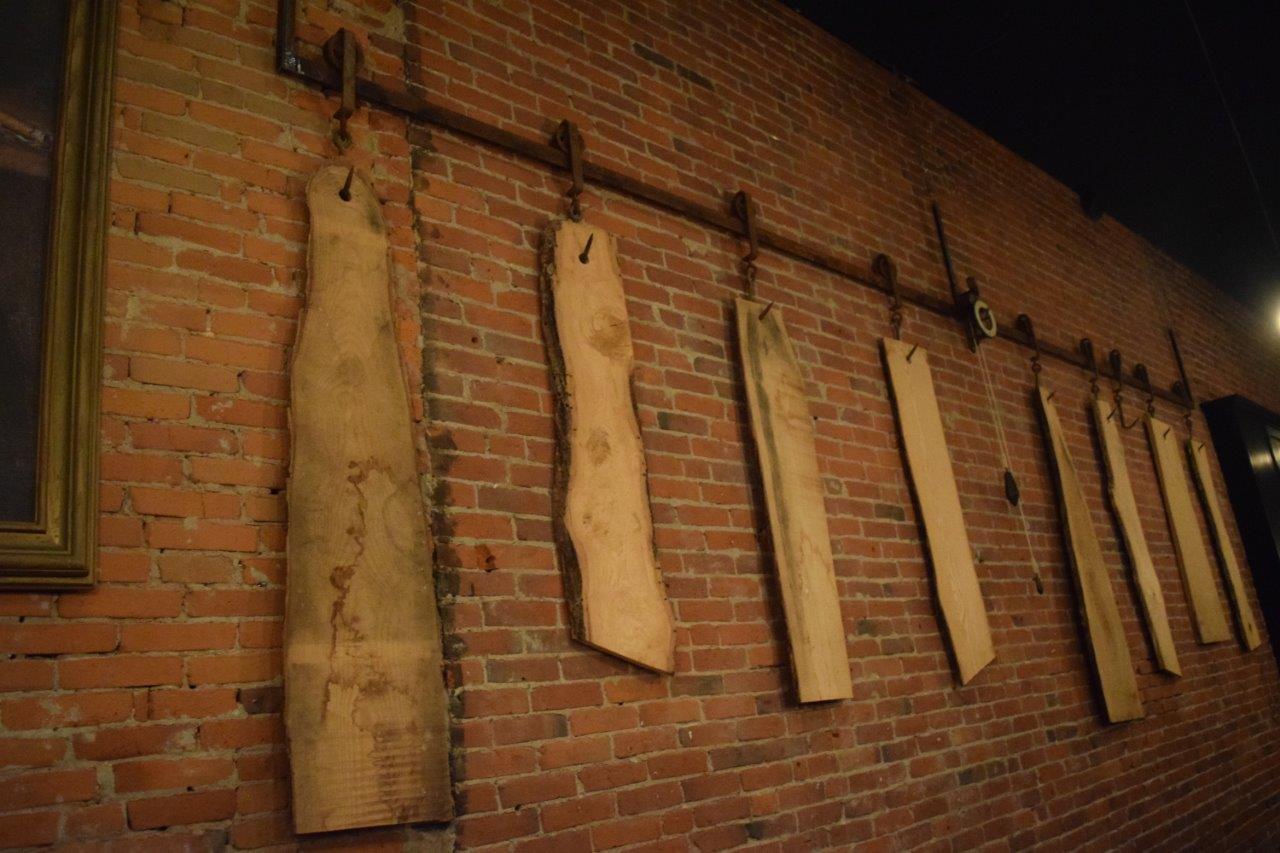 From fine dining to casual bistros, from brew pub to British high tea, or ethnic cuisine to BBQ, Albany, Oregon’s vibrant culinary scene is more than what many towns of 52,000 can boast.

Big city chefs and restaurateurs: Keep doing what you’re doing. But while your rents continue to skyrocket and you drive to work in gridlock, know that not everyone in your profession measures success by working in a big city foodie hot spot. And that’s good news for all of us who like to explore small towns and cities, but also enjoy a good meal.

Take a look at an eclectic list of great places to eat in Albany. 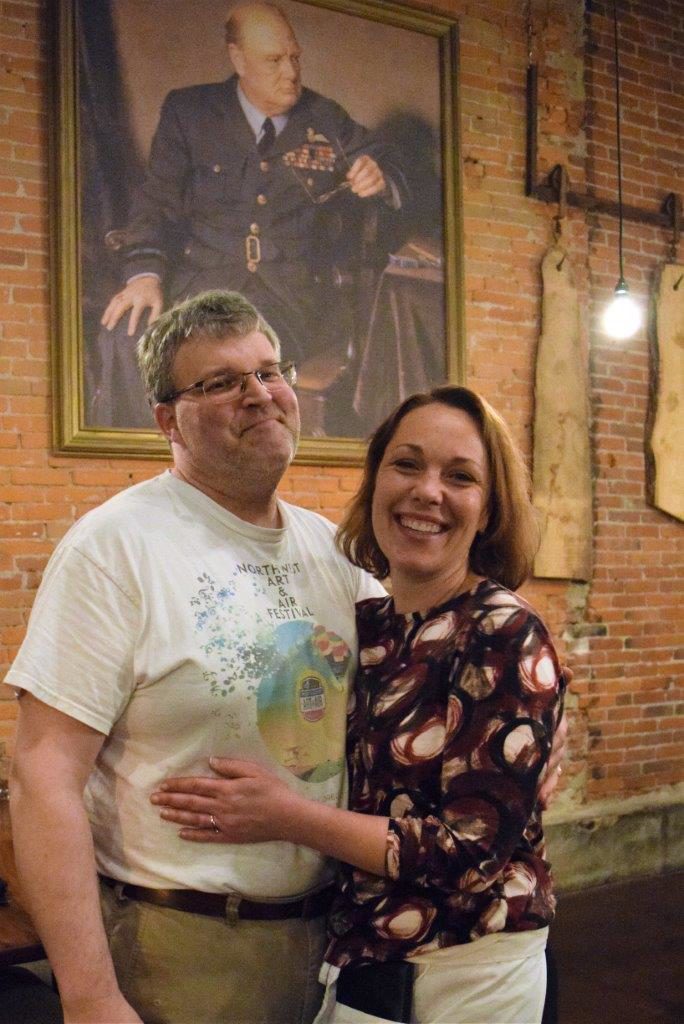 Sybaris Bistro owners Matt and Janel Bennett decided to open their own restaurant and put down roots in Albany back in 2001. Chef Matt won several culinary competition medals and is a James Beard Foundation chef. His reputation has grown to national recognition, but Albany remains home.

His menu, as he says, “changes with the crops” each month and is fresh, diverse, and innovative each time. He values the direct relationship he has with his purveyors; meats, vegetables, fruits and herbs. Most fresh ingredients come straight from Oregon and Washington, if not Albany and the Willamette Valley. 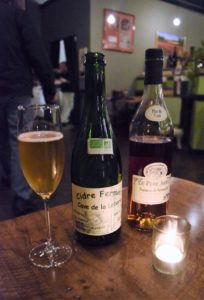 An after dinner French cider cocktail.

Sybaris is Albany’s premier fine dining option in town, and they also manage a great wine list and bar program. You won’t find more welcoming gracious hosts (and story-tellers) than this dynamo husband and wife team and their equally adept staff. Get on their mailing list to hear about special pre-fixe dinners and other events.

Make a day of it and drive in from Portland, Eugene or wherever else just for a meal. For that matter, fly here…from where ever. 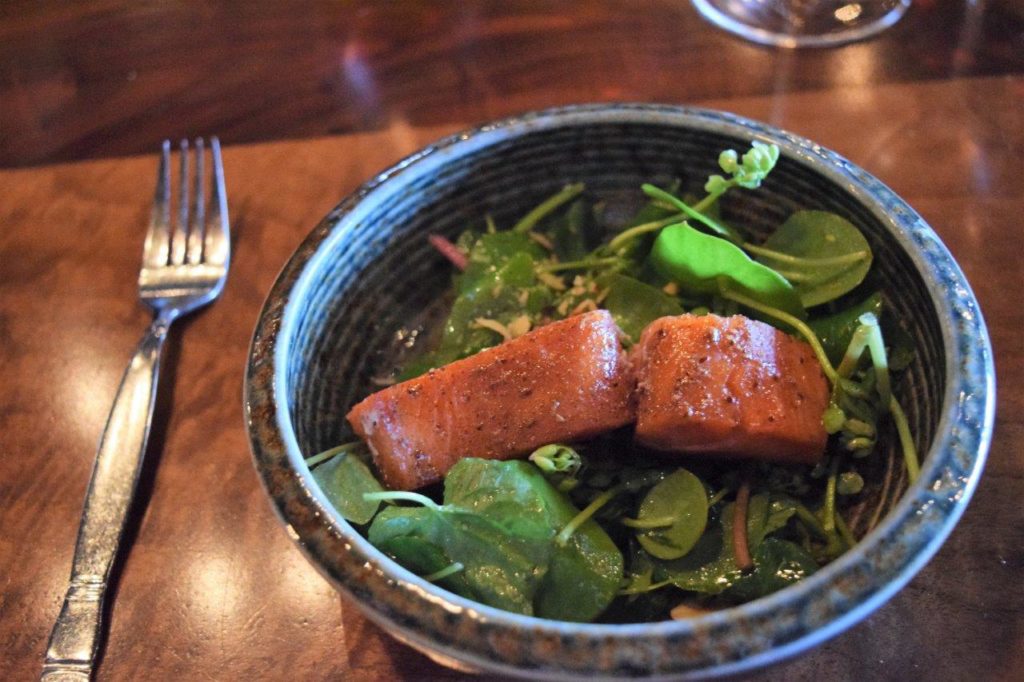 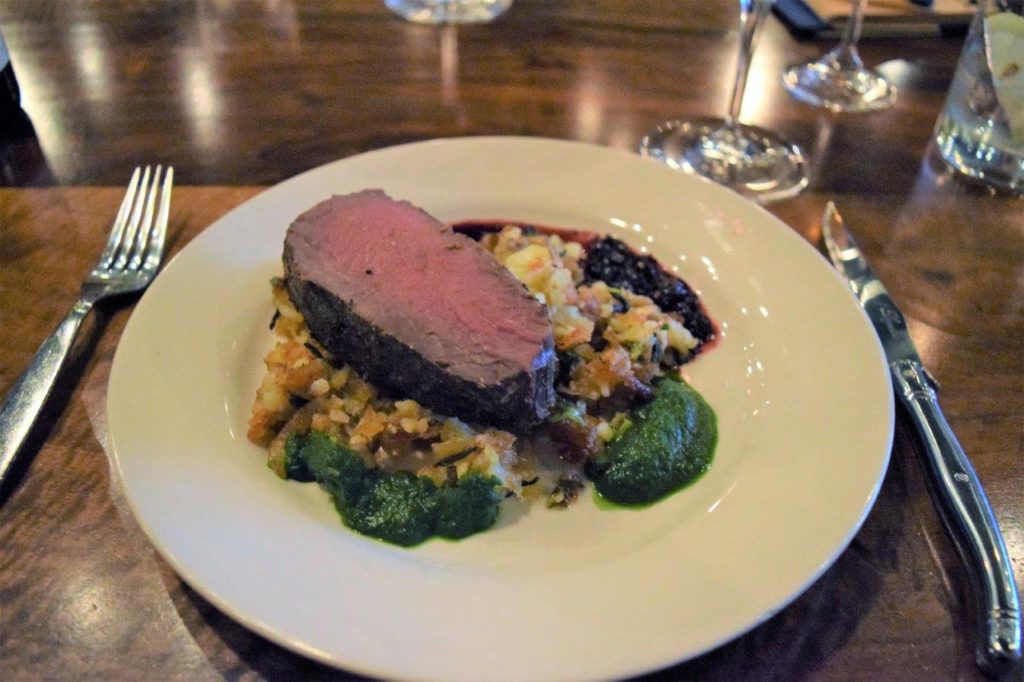 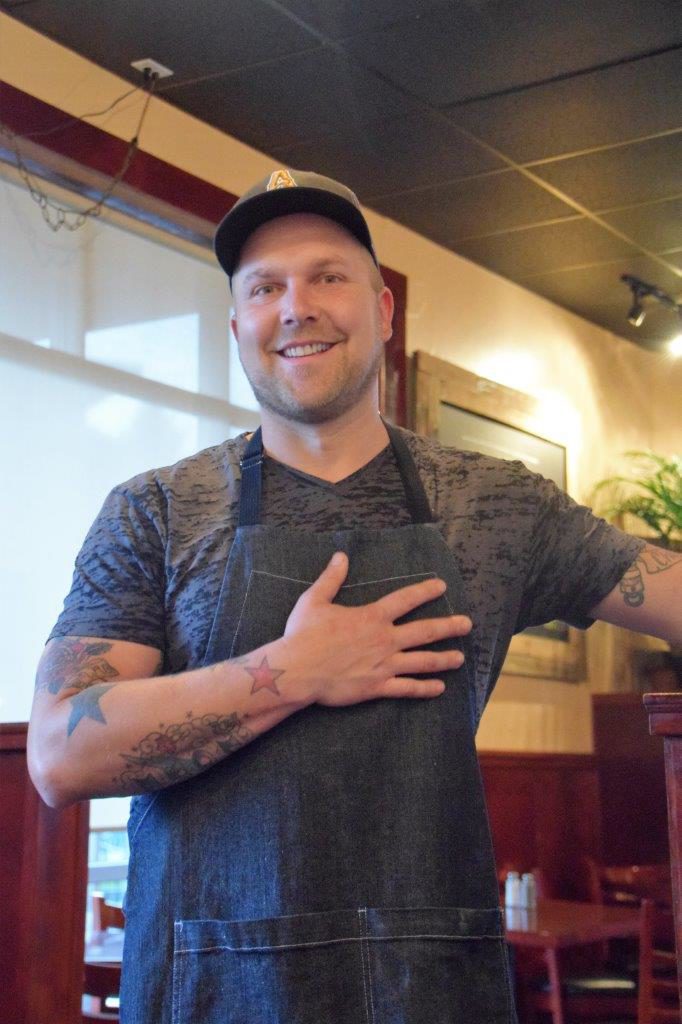 Brother and sister team, Cody Utzman and Kila Swearington grew up in Albany and together run Frankie’s Restaurant.  Chef Cody got his initial culinary training in Albany, then left Albany for Brooklyn, New York in 2004. He found success as a two-time winner on the Food Network’s show, “Chopped” and running three restaurants located right in his Brooklyn neighborhood. Kila remained in the area, but also has a long restaurant career. In 2013, Cody returned to Albany and the two opened Frankie’s. The plan is to expand their enterprise in the same way Cody did business in Brooklyn; next up is a bakery/coffee shop.

Chef Cody says, “Our menu has some standards, many of which have been on the menu almost from the beginning. And a Chef’s Menu that changes every six weeks. We source everything we can locally. The asparagus was picked a mile away. The eggs for the Hollandaise sauce are from our chickens. I have mushroom hunters I work with.” The menu has it all; creative and “stand-by” salads, creative appetizers and small plates, burgers, steaks and seafood and a changing chef’s menu of creative appetizers, small plates and entrees. The bar program is expansive and creative.

Spring asparagus in the lightest of light hollandaise sauce with Olympia Provisions prosciutto. 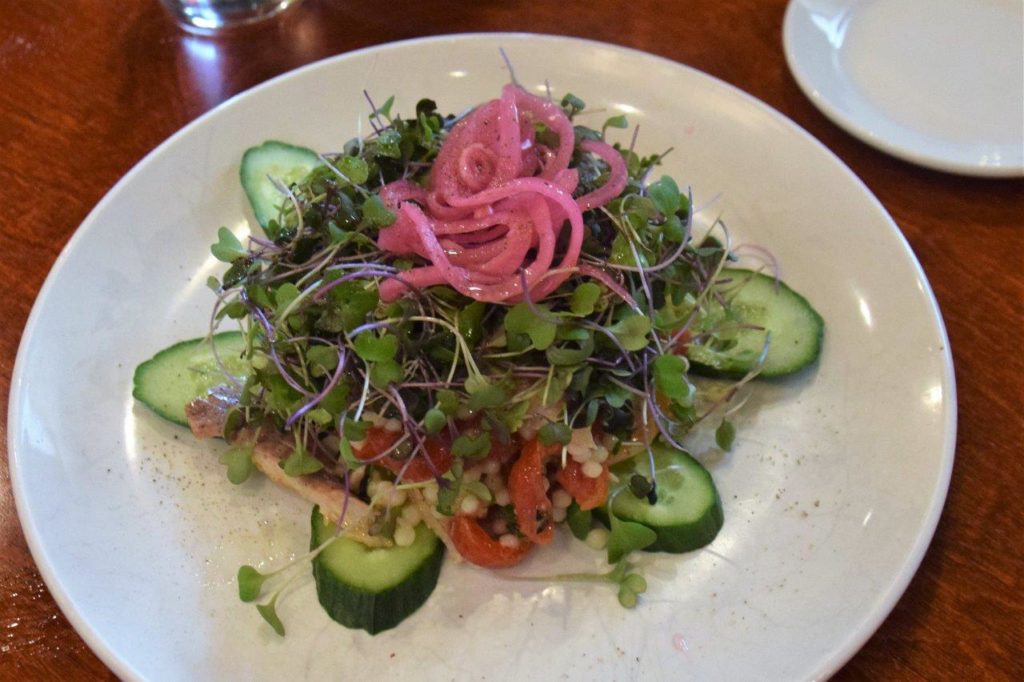 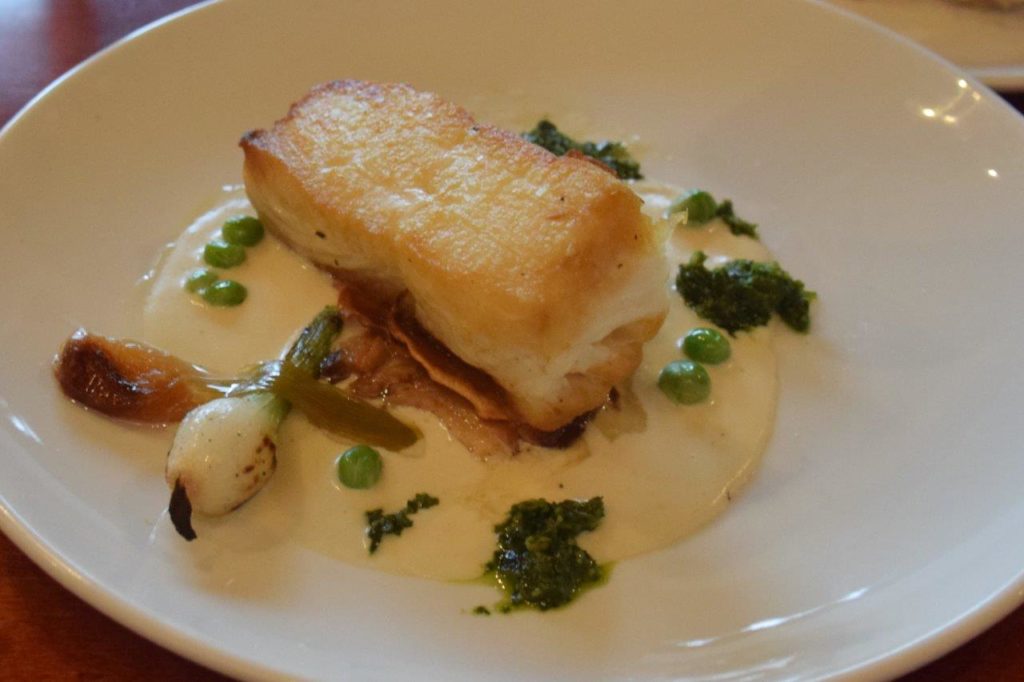 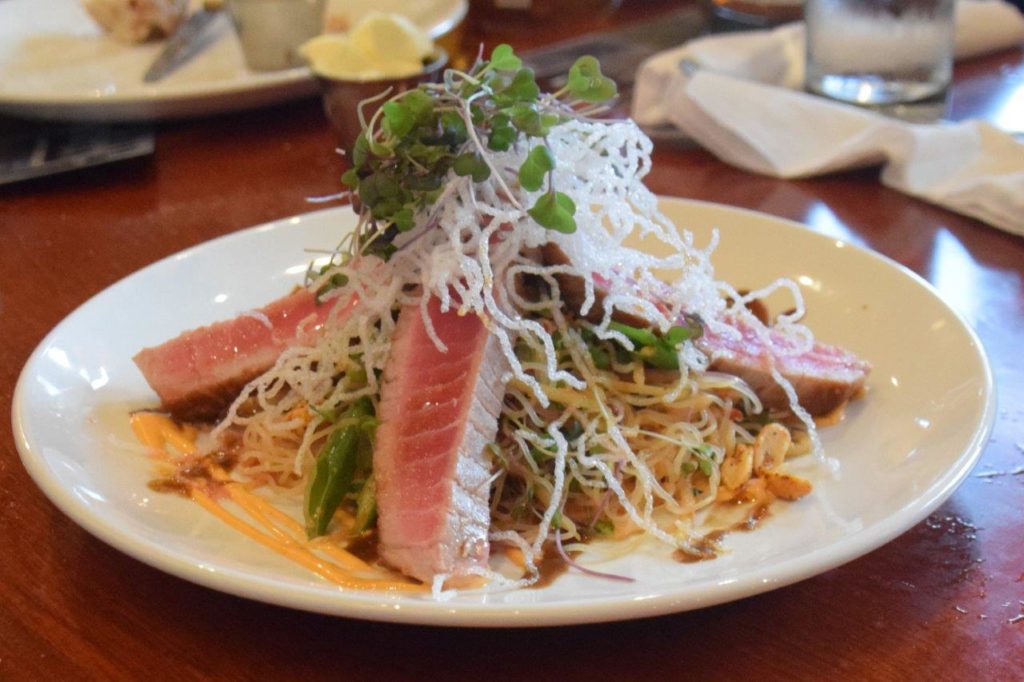 Left to right: A salad of pearl couscous, cucumber, roasted red pepper, greens and smoked trout. Halibut: when halibut is running in Oregon, you have the halibut! Ahi pad thai, all decked out!

As we leave after a ridiculously excellent meal, I notice a framed clipping of the article that appeared in the Albany Democrat-Herald about his Chopped win. It’s the only mention made of his achievements, and a local one is a nice touch.

Who’s Frankie? In naming the restaurant, Cody and Kila’s decided to honor their late father, a much-loved member of Albany’s community. Cody says, “My family lives here, we own property here. We want to make Albany s a better place to live.”

You just can’t talk about Albany culinary scene and not talk about Novak’s Hungarian Restaurant. Matilda and Joseph Novak opened Novak’s in 1984, sharing their native Hungarian cuisine after leaving communist Hungary and firmly establishing themselves in the U.S. in 1957. The Novak children and grandchildren have all, at various times, helped at the restaurant. While Mama and Papa (as they’re affectionately known by both family and the town alike) still make regular appearances, daughter Karen is the current owner and Karen’s twin sister, Matilda, and younger brother Joseph are still also actively involved. 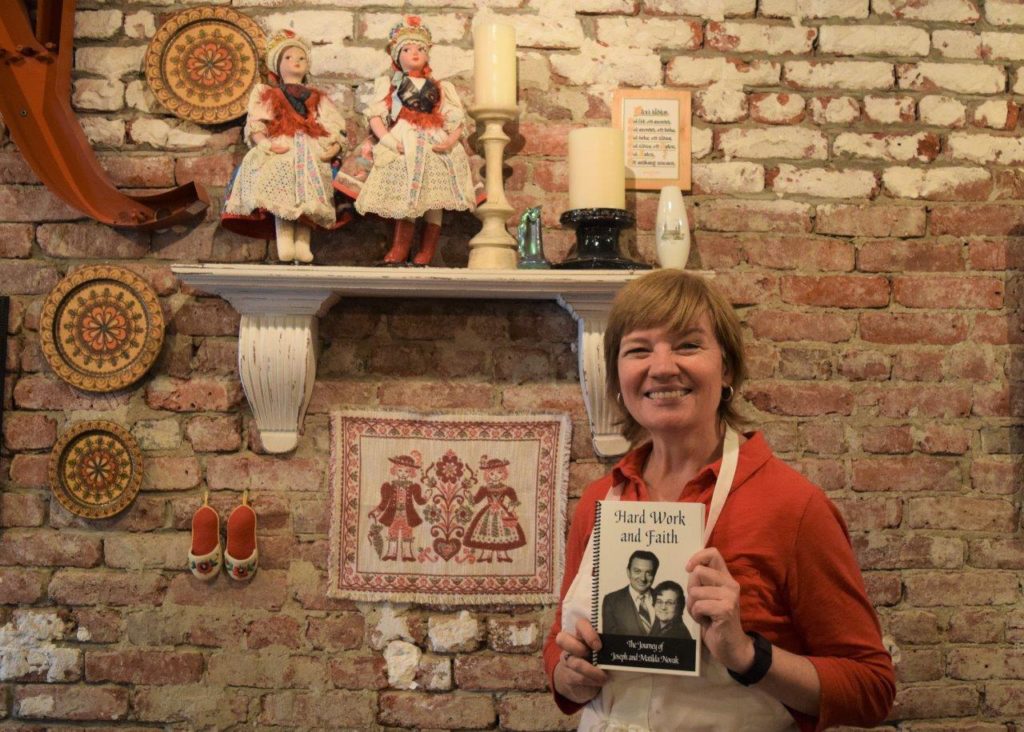 Mama and Papa’s daughter, Matilda, poses with a copy of the Novak’s cookbook.

The restaurant has moved twice, and their newer, permanent home is a renovated 100-year-old building in downtown Albany.  The welcoming family atmosphere and fresh homemade dishes make Novak’s a local favorite. 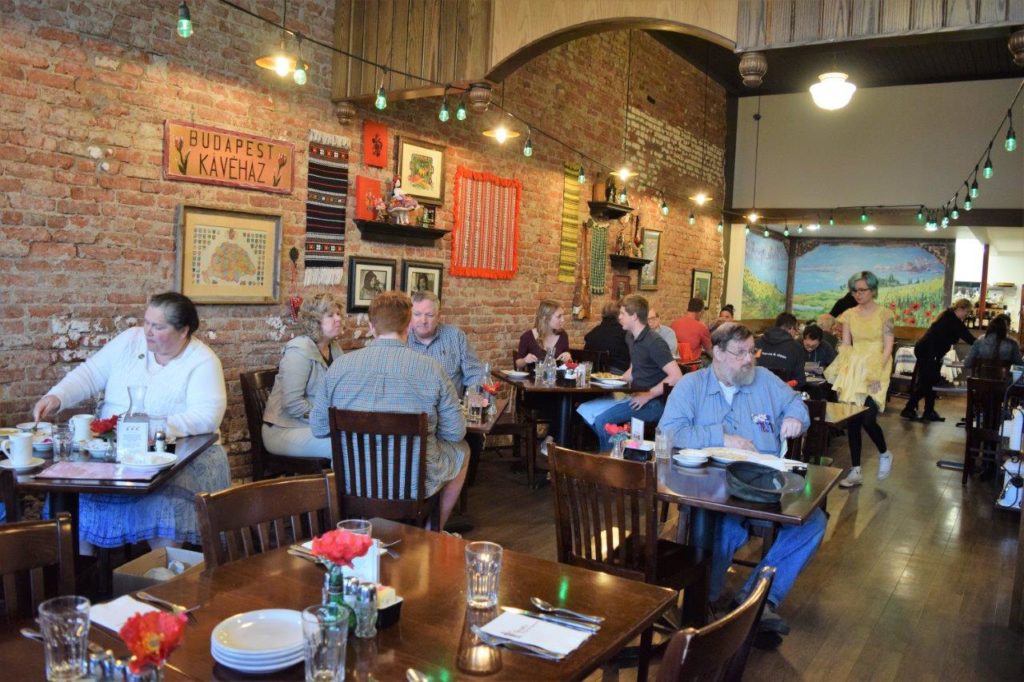 Novak’s is housed in a cozy 100-year-old building in downtown Albany.

Novak’s is only one of 19 Hungarian restaurants in the U.S.  Expect hearty and flavorful portions of goulash and other stews, cabbage rolls, tender meats and sausages, spaetzle noodles, and aromas of paprika. 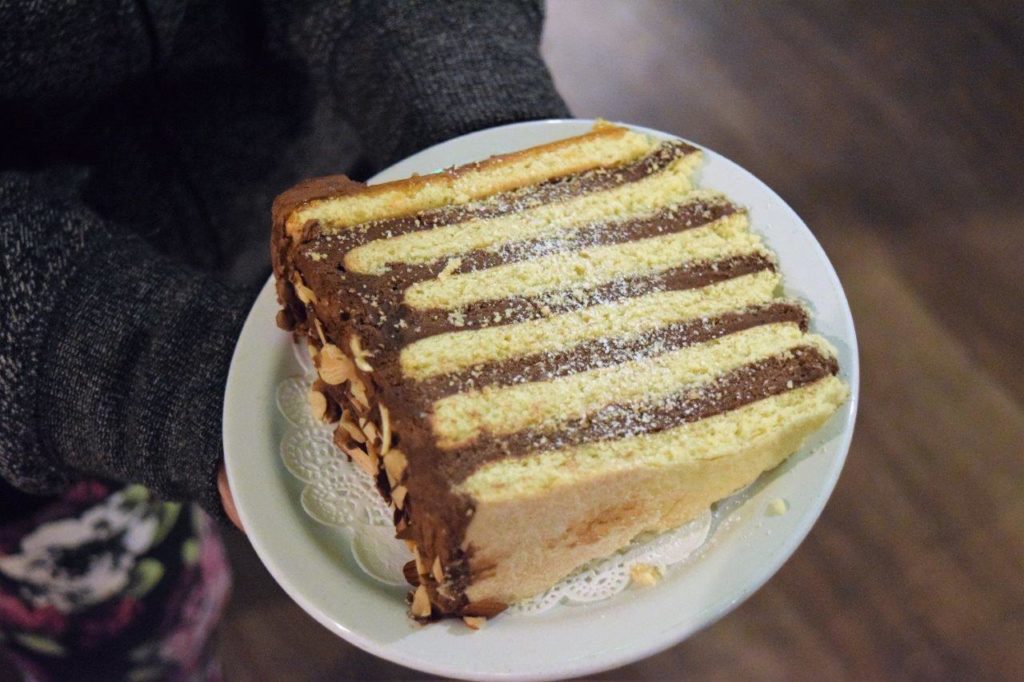 Homemade desserts rotate around an old-fashioned diner carousel and make selection even more difficult because they all look so good.

(Editor’s Note: The “Bo-Mackians” are still very much on the food scene in Albany and the surrounding communities, but they’ve been focusing on their catering business and production of their BBQ sauces and other food products for the retail market, so have since closed Bo-Mack’s BBQ.)

There’s room for more than one “Mama” in Albany. Kendra Knebel isn’t just “Momma” to her own seven children, she’s helped raise some 20 foster children over the years and welcomes just about everyone who comes into Bo-Mack’s BBQ into her brood as well.

Heck, I want to be a member of her family. “Seven children have trained me to think fast,” she says. She talks fast too, with a quick, sassy wit and a big heart. Momma Kendra is a dynamo whose day consists of chores at the family’s 63 acre ranch in nearby Lebanon with husband Daniel, the restaurant and catering business and the family’s growing line of food products. 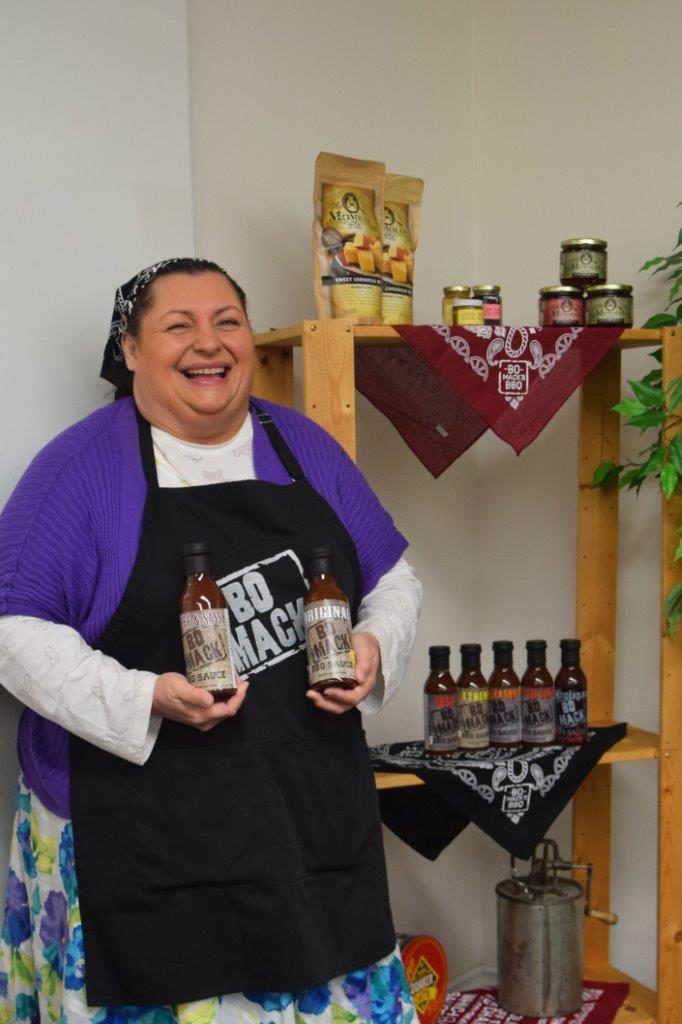 Kendra “Momma” Knebel brings heart and soul and humor to her business ventures.

Bo-Mack’s is located in downtown Albany (next door to the Albany Visitor’s Association.) Tender BBQ beef brisket, pulled pork, pork ribs, and chicken, as well as a menu of sides await and will provide a feast, whether you eat-in at the casual restaurant or take your order to-go. They’re adamant about quality, and it shows. (Don’t miss the corn bread.)

Son Bo-Mack developed the BBQ sauce recipes (and made the messes.) Youngest daughter Malika is General Manager who handles day-to day restaurant and catering operations. Each member of the family has been involved at some time or another.

Pick up bottles of their line of BBQ sauces, corn bread mix, and jams and jellies at the restaurant store or online. (You’ll find them at at some Pacific Northwest Costco stores soon as well; and yes, Momma was directly involved in negotiating that deal.) 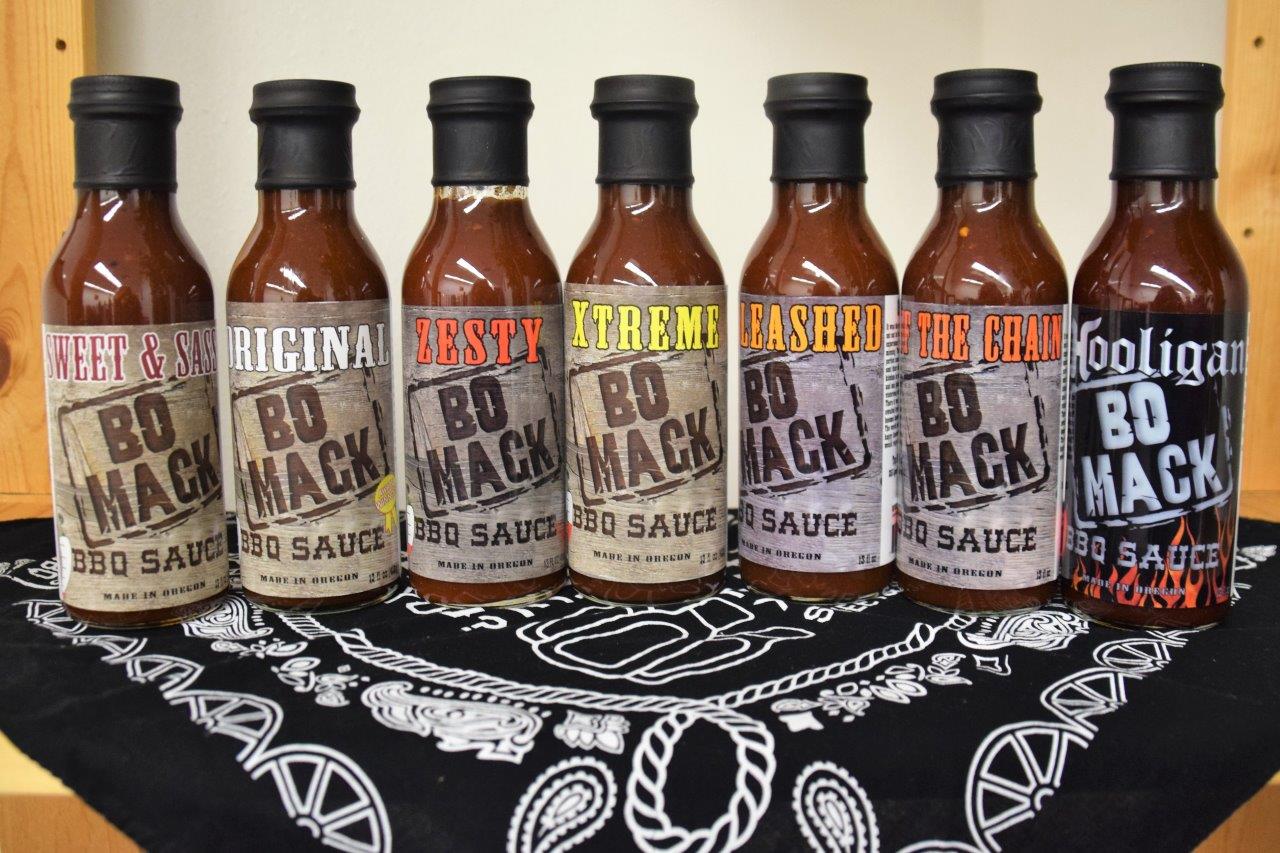 Albany truly has some great places to eat. The restaurants included here are not at all exhaustive of Albany’s line-up.

Albany’s restaurants are what initially drew me to this town. But the town’s relaxed vibe, the people, and the events held throughout town will also keep me coming back. I have to work off those meals somehow.

Holly, I wholeheartedly agree with you that there are some great (yes, destination) restaurants missing from this list. I’ll have to return to visit Cellar Cat and others. Thank you!

Indeed! While Albany is creating a vibrant culinary scene it is, with the exception of the Santiam café at the college, ALL happening downtown in the historic district (& this includes, as noted in the article, Frankie’s just over the bridge). Cellar Cat and The Vault are huge omissions here, as is Brick and Mortar as the only step-up breakfast and lunch place in the entire area.

Thanks, Holly. You’re mentioning the others I wasn’t able to get to during my visit, and it DOES take residents to fill in the gaps. Again, I just couldn’t get to them all this visit, and that’s why the emphasis is on what a great foodie town Albany is. Bottom line is: Albany has a LOT to offer residents and visitors–a great food and also some great things to see and do. Thanks for sharing!

Sherry, once again, I agree (and apologize!) I will return to the restaurants mentioned here, but I also heard great things about Vault 244 Bistro–and others. Albany really has a lot going on.

How was the French cider cocktail? All the French I met in Spain said their French cider was much better and sweeter than the Asturian cider that we were drinking in Spain. I’m interested…

Stacey, both Spanish and French ciders have their different traditions and styles, of course, so I’ll never go with a blanket one is “better” than another. The French cider cocktail we enjoyed at Albany’s Sybaris Bistro was lovely. This was a fortified cider cocktail, made from calvados and pommeau ciders. We enjoyed it with dessert: two sorbets—a huckleberry sorbet and a wood sorrel-buttermilk sorbet. Convinced you need to visit get to Sybaris yet?