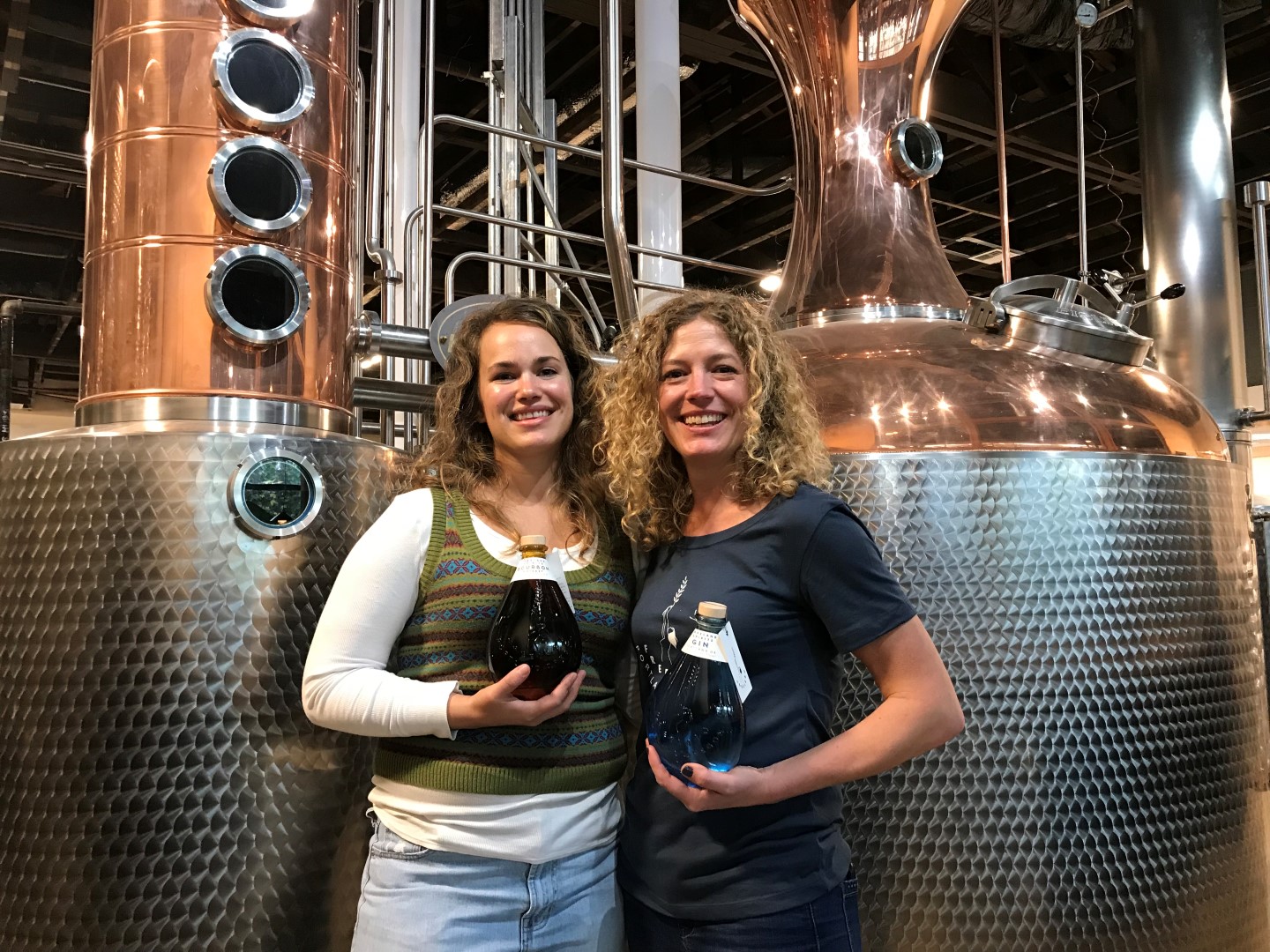 With spirits and cocktails riding high in popularity, distilleries continue to open at a steady pace. Entrepreneurs are turning their ideas into reality and the results have been great fun to watch. There are personal stories, cozy tasting rooms in which to gather, and of course, terrific new spirits and cocktails to imbibe. Freeland Spirits is the latest to join the ranks within Portland’s Distillery Row. And this woman-owned, woman-distilled and women-run company offers all this and more to the mix. 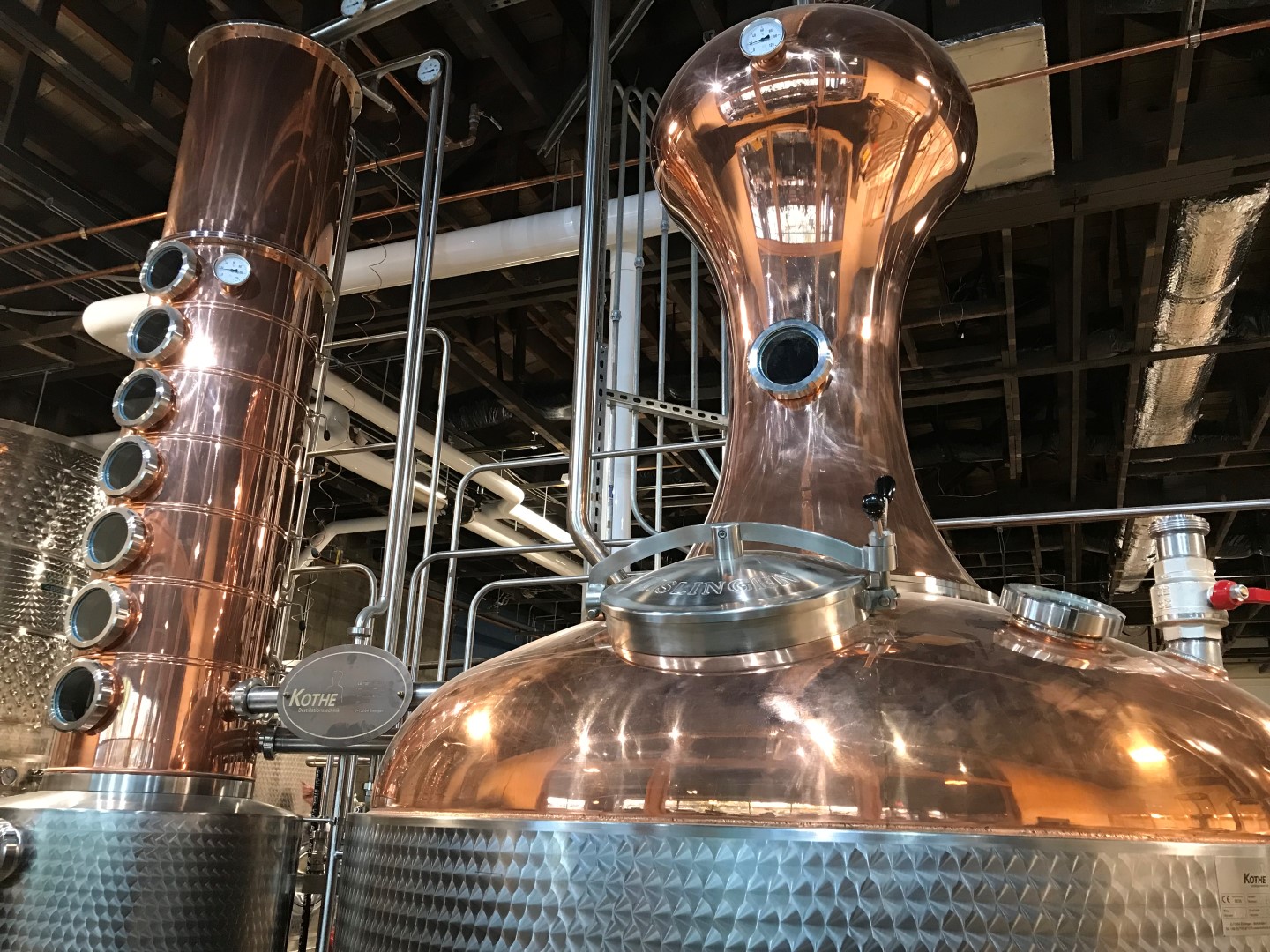 Freeland Spirits is happy to be at their new distillery, stills in place, in NW Portland (Photo Nancy Zaffaro)

It Starts With a Vision

Once Jill Kuehler decided to turn her vision for a craft distillery into reality, she knew the big picture. With her distillery’s name, Kuehler incorporated family history and values she holds dear. The name Freeland Spirits pays homage to her Texas grandmother, “Meemaw” Freeland. Her grandmother didn’t drink, but she did know good, healthy living, hard work, and taught her that women could be strong and independent and do anything they set their minds to do. 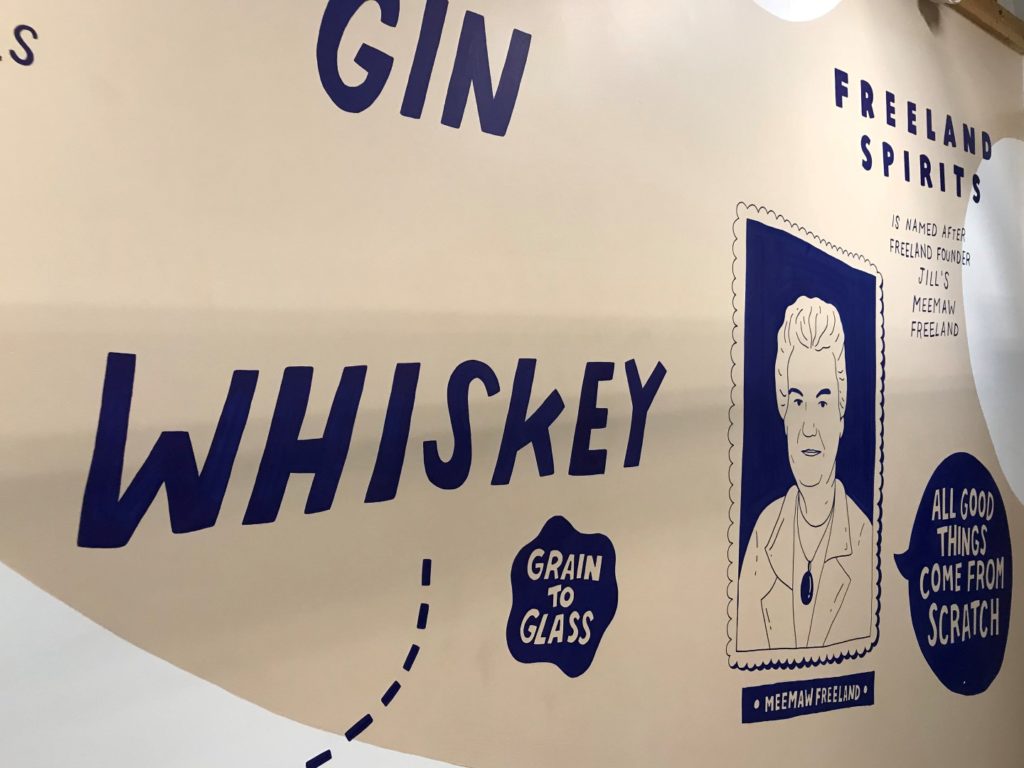 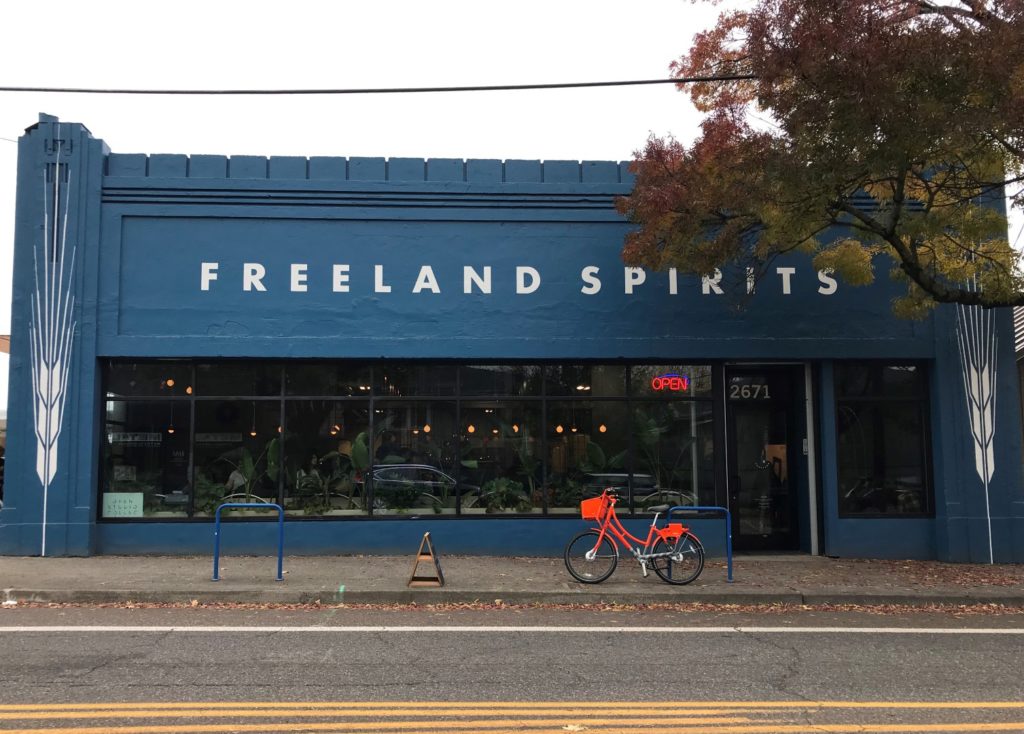 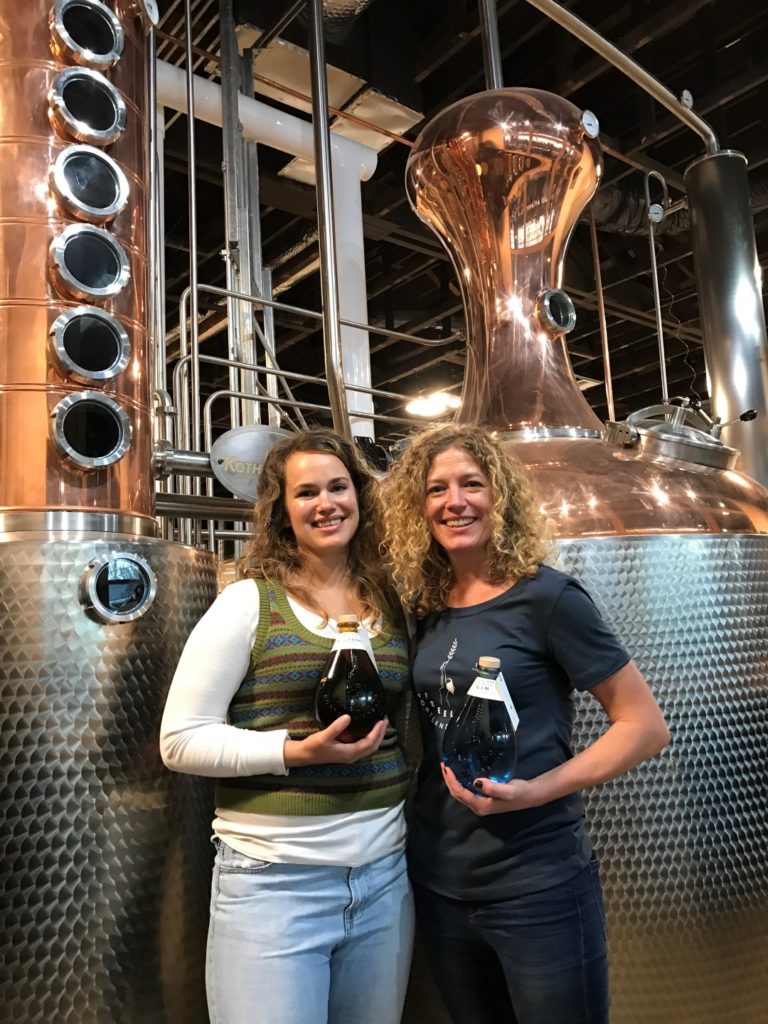 Let’s get this out of the way because it needs to be said. It’s 2019 and fewer than 1% of U.S. distilleries are owned by women. And while there are a growing number of women entering the industry as distillers, don’t expect anything close to equity anytime soon.

“When I started meeting with and interviewing distillers, I told myself my distiller didn’t have to be a woman. But they had to be the best,” Kuehler told me. “A friend first introduced me to Molly and we really connected, both vision-wise and personally.”

As well as a similar enthusiasm, Molly Troupe brings with her an undergraduate degree in Chemistry and a Master’s degree in Distillation from Heriot Watt University in Scotland.  And she had practical work experience as well as a Distiller and Consultant with other distilleries.

Troupe too knew the fit was right. “Jill was getting into this for all the right reasons. She really loves the whole process, from the raw ingredients, the equipment, the people. She was open to using both traditional and newer, innovative methods in distilling, both of which I like to work with. Freeland Spirits is a great fit for what I want to do as a Distiller.” 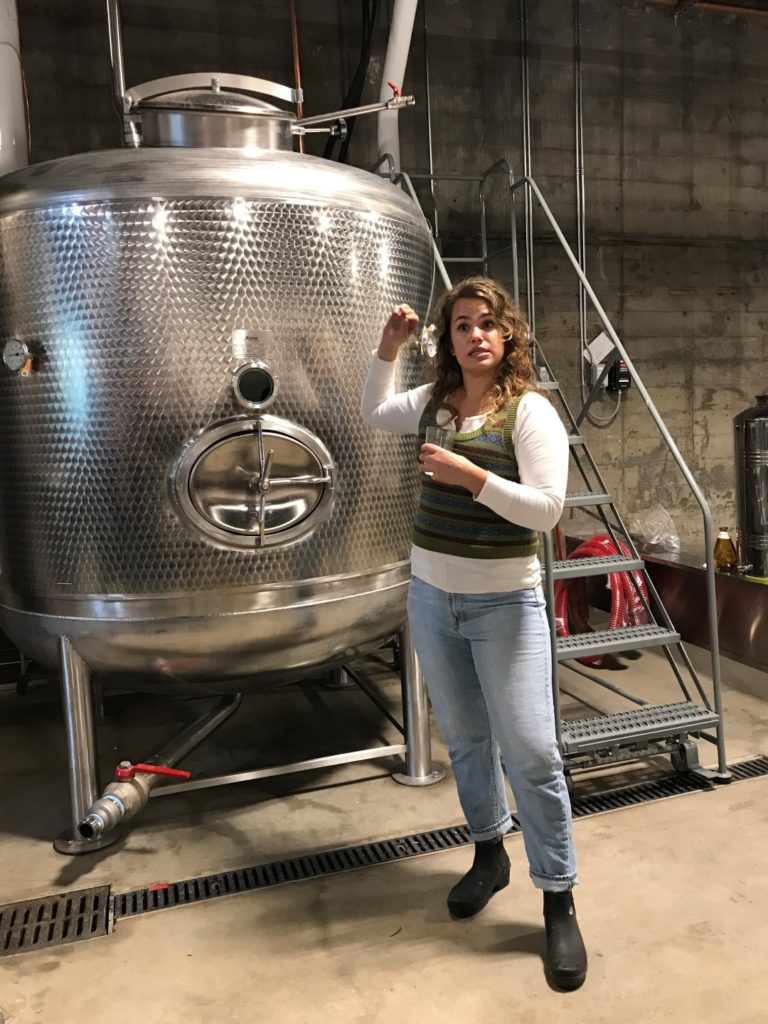 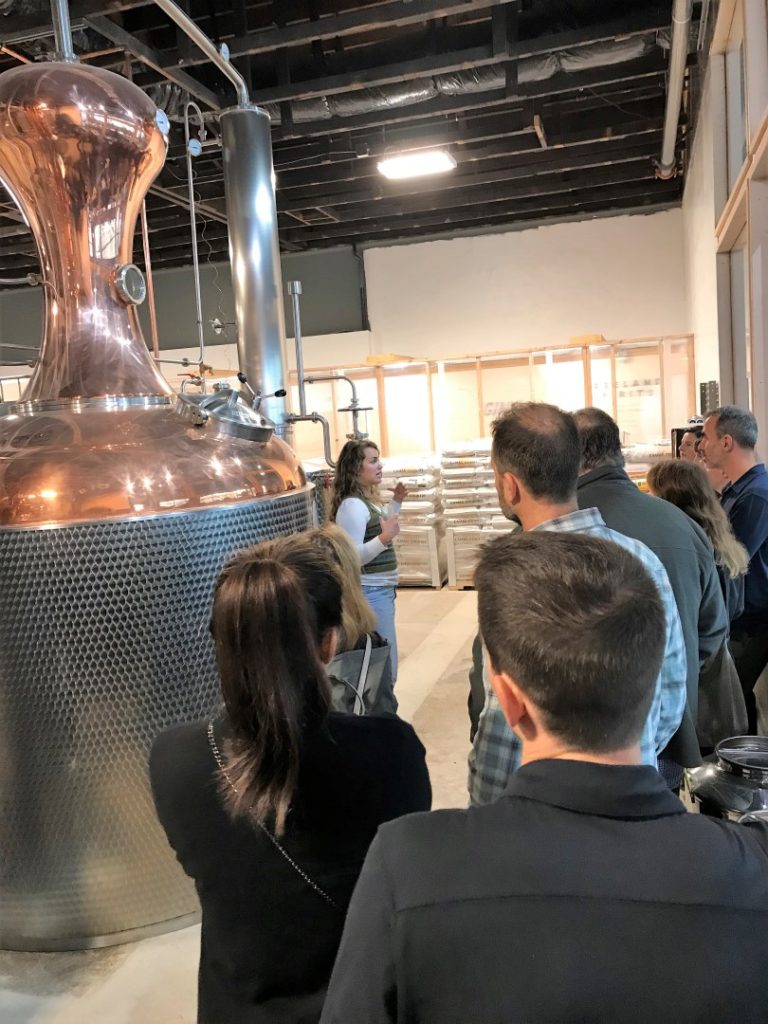 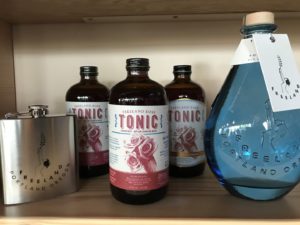 Freeland Spirits released their first spirit, a gin, in December 2017. Their small-batch gin blends juniper and 13 other botanicals. Additionally, use of a vacuum still adds hints of cucumber, rosemary, mint and thyme. You’ll taste the juniper and other botanicals, but to my palate, the style is somewhat of a cross between a juniper-forward and a dry gin. The results are fresh and crisp and truly one of the best gins I’ve tasted. 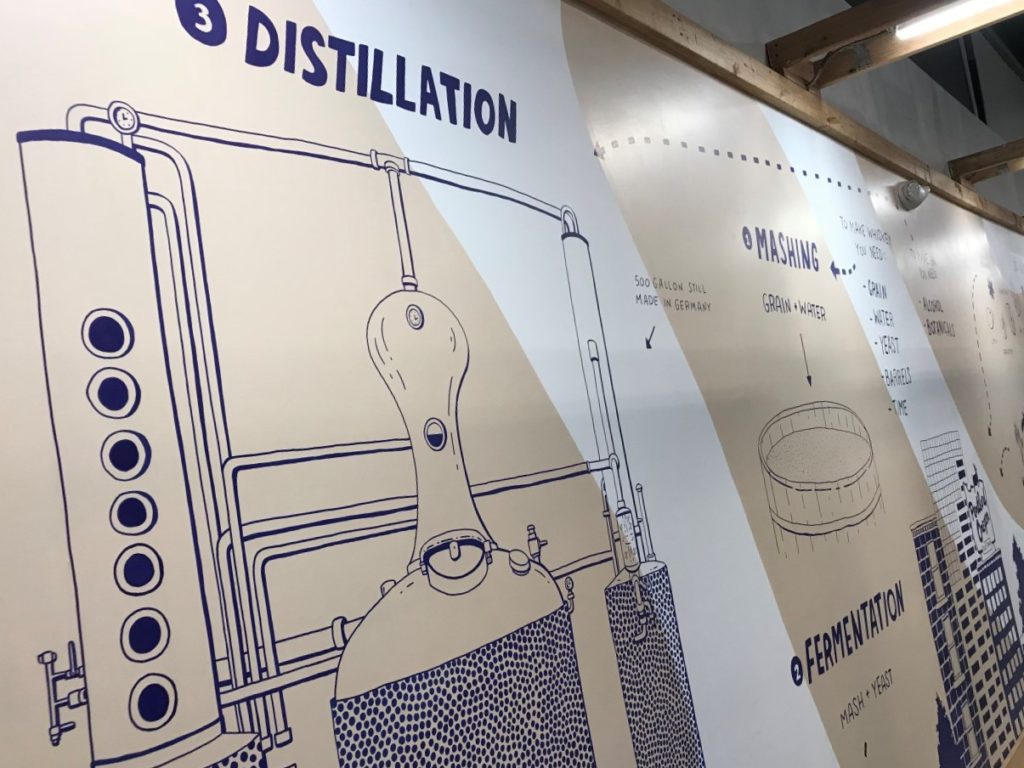 Whiskey isn’t born overnight, and for the distillery to get their start, Freeland partnered with another distillery to get their initial run in barrels. Once Molly decided it was ready, they finished the whiskey for five months in Pinot Noir barrels from Elk Cove Winery and blended it with 12-year old bourbon. The result is a bourbon with a light sweetness, warm spice, and of a smoothness and quality I’ve been enjoying sipping neat or with couple cubes of ice.

With their new digs in Northwest Portland came the installation of their new equipment. The 15-month waiting list for their German-made copper still worked out well as they searched for the right home.

Molly said, “We’re very clear that we won’t release our whiskey before it’s ready. The blending, the finishing, the different approaches. I feel that; that everything that comes out of here is my responsibility. We’re really happy with the results of our bourbon.” 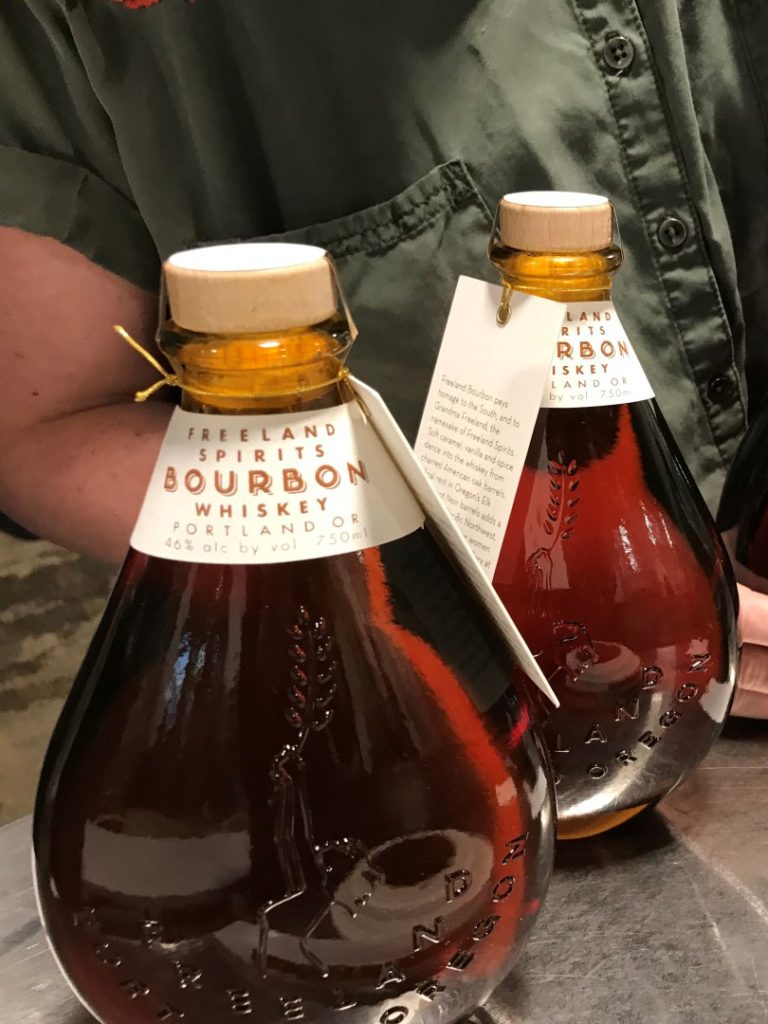 Freeland Spirits’ next spirit will be a rye whiskey. Kuehler and Troupe have partnered with rancher Cory Carman of Carman Ranch. Cory’s Eastern Oregon Wallowa County ranch ethically-raises cattle, pigs and poultry. Crop rotation is already a ranch practice, and the rye will do very well on Carman’s ranchland. Another win-win. Cory’s family farm has been in the family her family since 1913.

A celebration was definitely in order for Freeland Spirits’ first whiskey release. What’s not to love about live music, food offerings of smoked pork, brisket and ribs, tempeh and squash tacos. a tasty list of sides, and a selection of delectable cocktails? The party spilled out from the tasting room to tents in the parking lot. There were distillery tours by the Master Distiller herself, and a high-energy and sociable crowd.  The November 2018 Release party was a success. 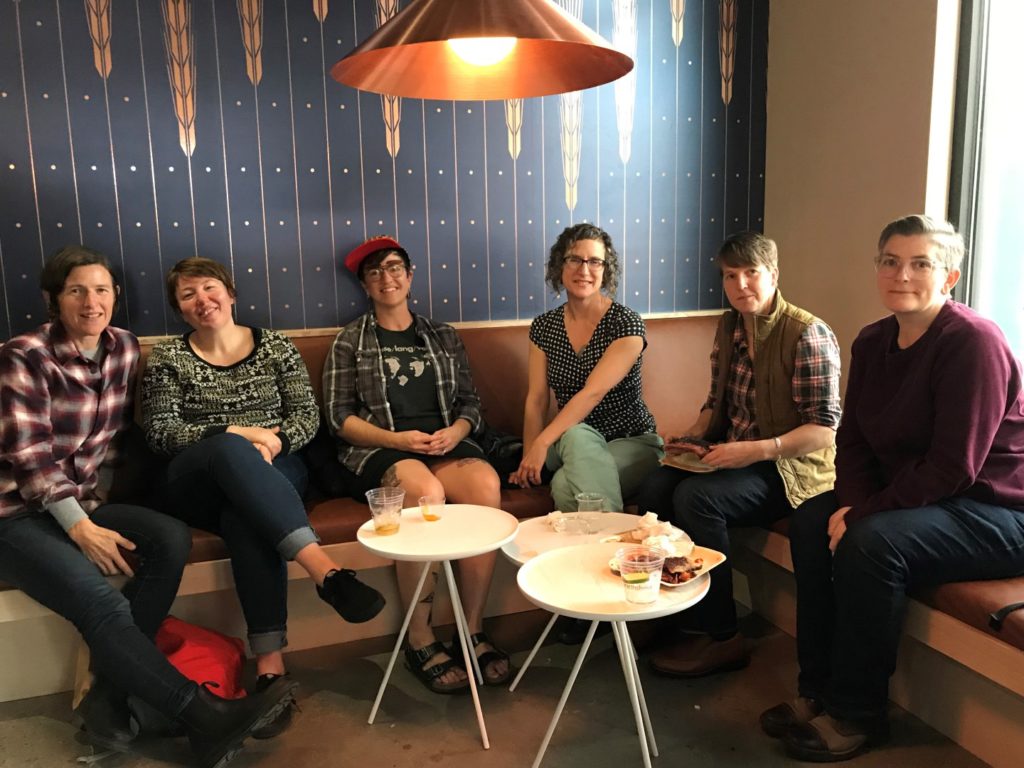 The Release Party for Freeland Bourbon proves the distillery to be a great place to gather with friends. (Photos Nancy Zaffaro) 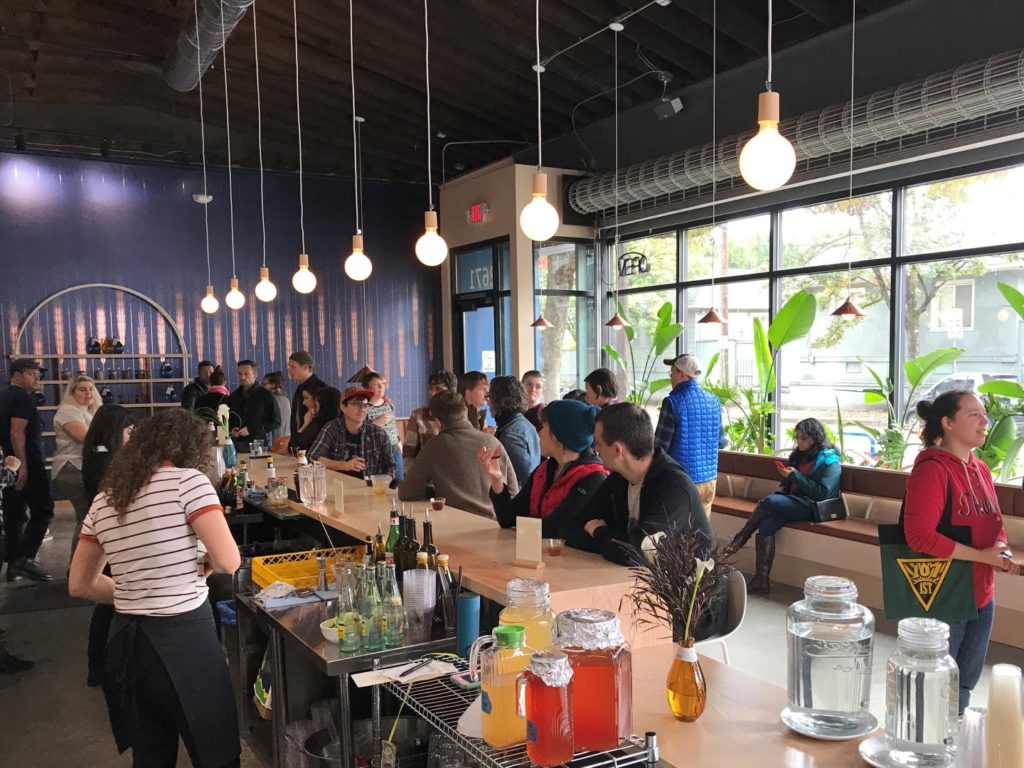 Cocktails included a Freeland Bourbon Manhattan, a Freeland Gin Rickey and a Freeland Gin and Rose Tonic, which uses a rose flavor tonic concentrate for sale in the tasting room. (They partnered with another Portland company, Portland Syrups, for their rose tonic.) 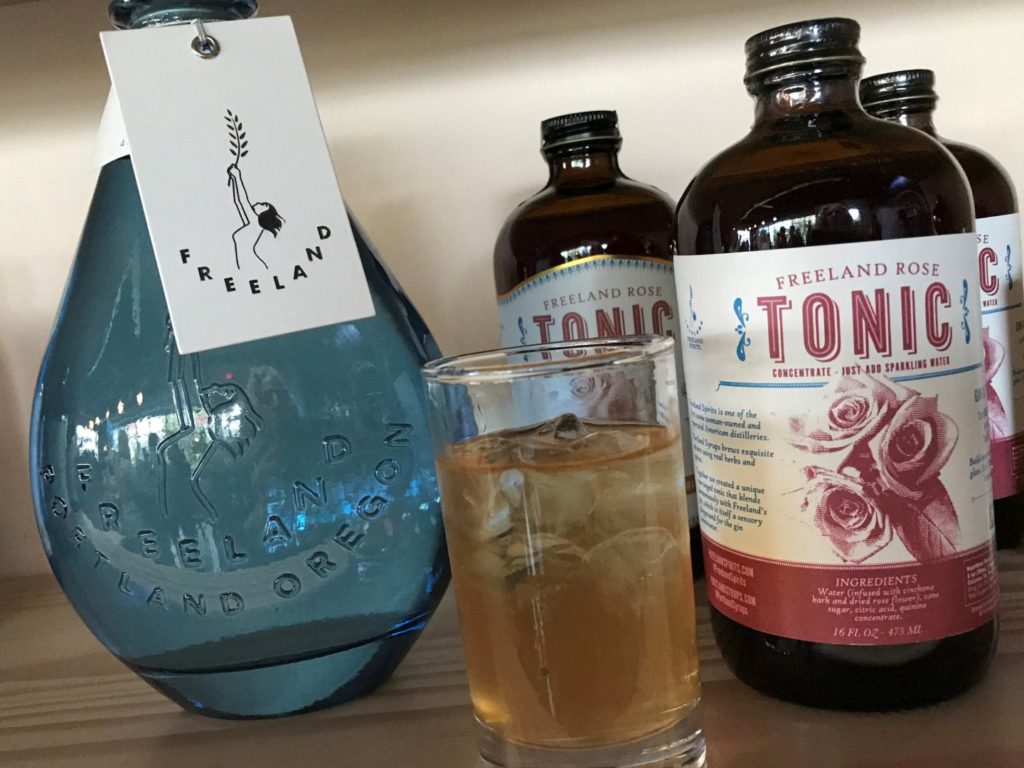 What’s ahead for Freeland Sprits? After their rye whiskey is released, they’ll expand with a single malt and alternative grain whiskies. They’d love to do small-batch seasonal releases, like an absinthe.

Molly smiled, “In a green bottle, of course. We love our bottles and eventually it would be great to have our  products in all the colors of the rainbow.”

And they’re finding other ways to embrace women-owned businesses. Women did much of the design and renovation of their space. Their tasting room offerings will expand to include gin-scented candles, whiskey-barrel beer, whiskey chocolates, and other products made by women-owned businesses. And they’d love to bring other women into the industry by providing education and training opportunities. (Troupe has already taken on a leadership role by serving on the Board of Directors for the American Craft Spirits Association.) 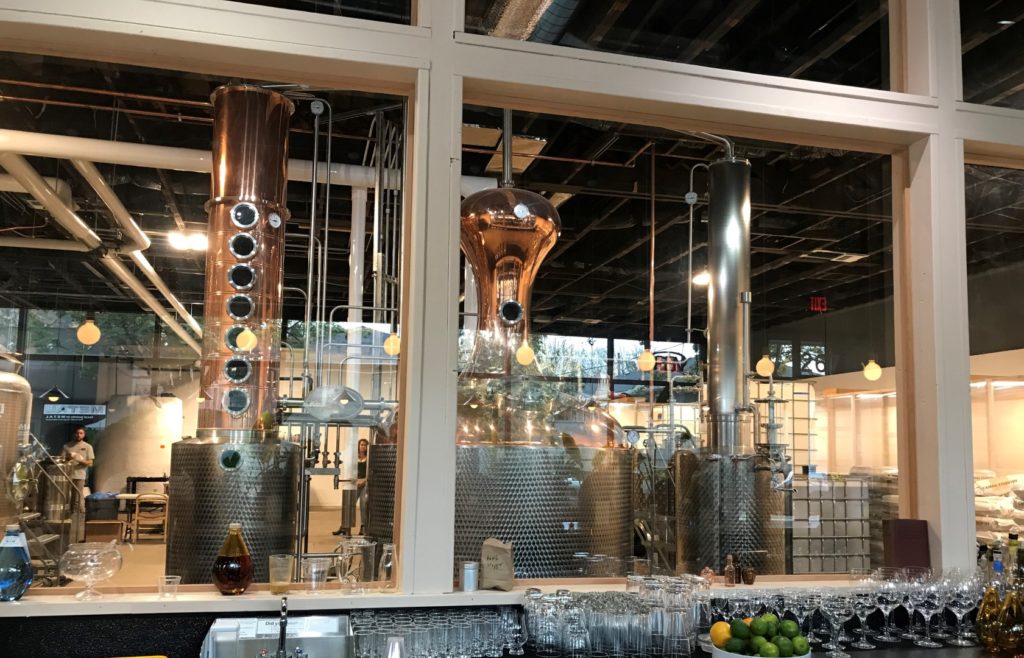 A full wall of windows allow you to watch the process while you sip or stop in for a bottle at the tasting room. (Photo Nancy Zaffaro)

Chatting with Kuehler and Troupe, it’s clear they’re both driven most by the desire to make the best spirits possible. This sense of purpose might just be the final component important to the success of any business. Knowing how to throw a good party and keep the work fun doesn’t hurt either. I’ll drink to all that. 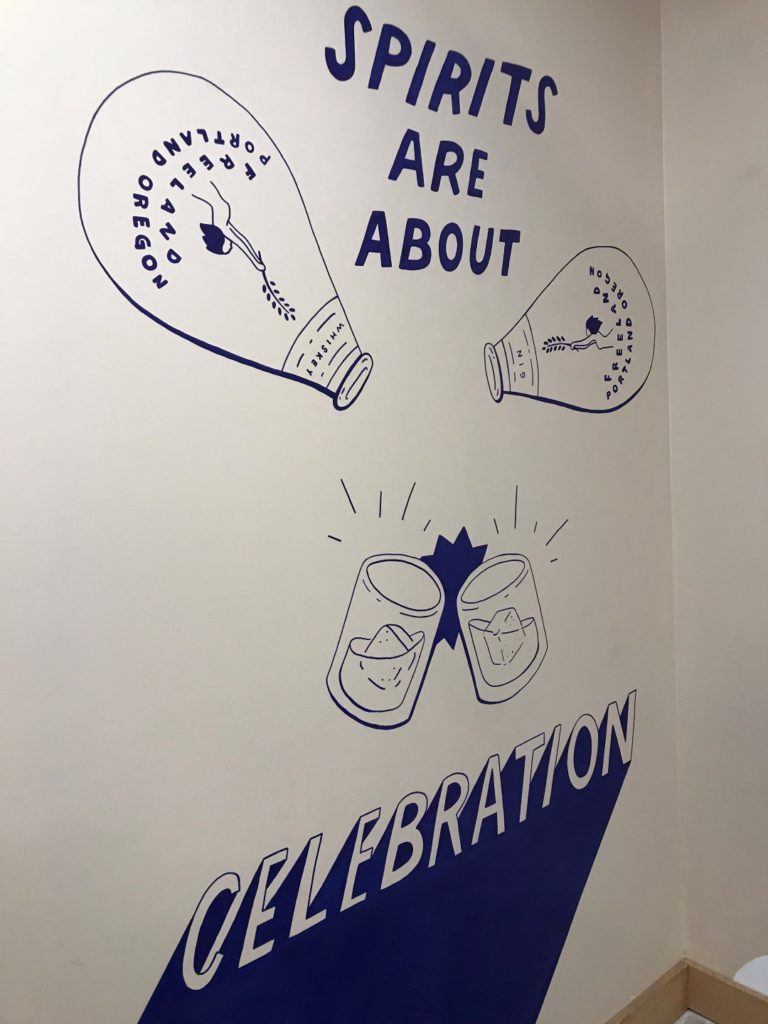