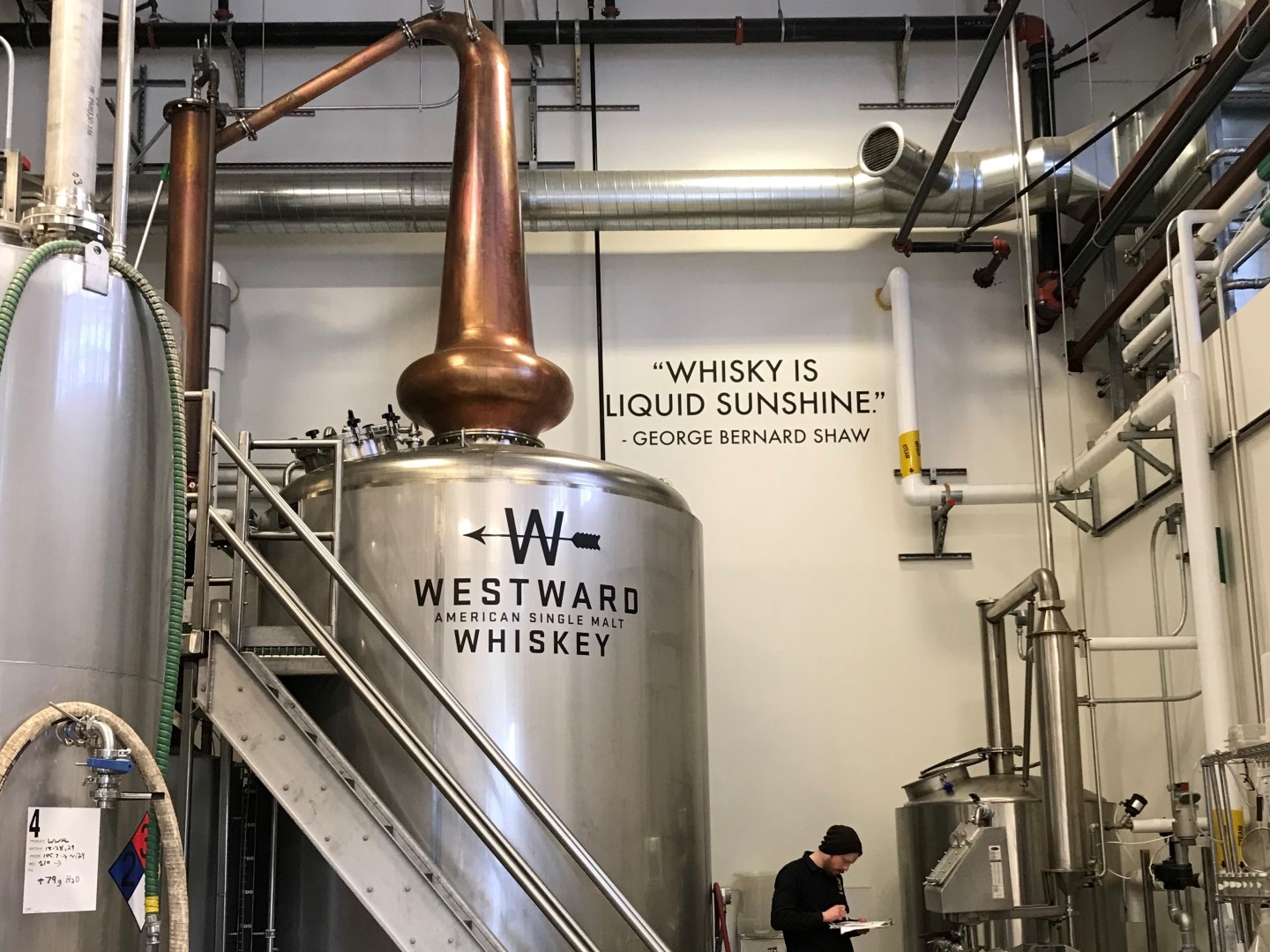 Success is sweet—or floral, smoky, fruity, full-bodied, delicate, light or rich, as the case may be. Three years after moving into their 14,000 square foot production facility in Portland’s Central Eastside neighborhood, House Spirits founder Christian Krogstad and the rest of the House Spirits team are still singing praise for the building in which they distill their highly-rated line of spirits. I took a “grain-to-glass” House Spirits distillery tour with Lead Distiller Miles Munroe to learn more about what they’re doing and see (and taste) for myself.

Christian Krogstad started House Spirits in 2004 in the college town of Corvallis, an hour and a half away from Portland. The craft distillery movement was still in its infancy at the time and it’s more than fair to say that Krogstad is a pioneer and leader of the industry that has since spread throughout the country.

Only a year into production of his Aviation Gin, he moved the company to Portland, to the not-quite yet-trendy Central Eastside. The area eventually became known as Distillery Row, other craft distilleries seeing the advantage of working in close proximity to one another and creating a collaborative environment. Aviation Gin took off (sorry) and other products followed.

In February 2015, House Spirits broke ground on their new production facility and tasting room. Three to four years in the planning, they enjoyed the luxury of building to their needs. They optimized the building for increased production of their Westward American Single Malt Whiskey, and moved in in November 2015. 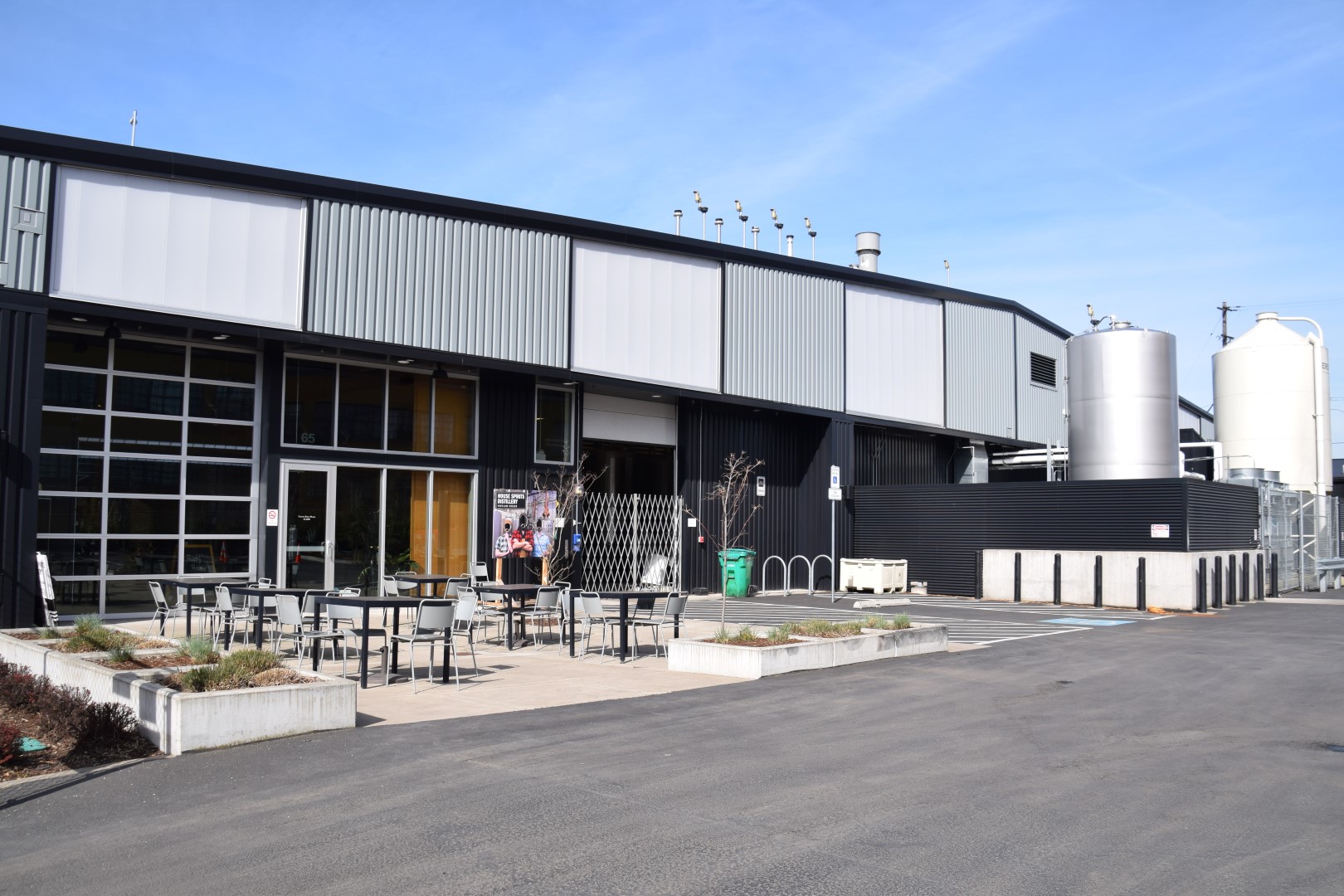 The Portfolio and the House Spirits Distillery Tour

In 2016, Krogstad sold Aviation Gin, and in February of this year, Ryan Reynolds (yes, that Ryan Reynolds) bought it from the previous owners. In both cases, House Spirits continues to distill the gin from their Portland distillery. Westward Single Malt Whiskey, Krogstad Festlig Aquavit, Volstead Vodka, and Casa Magdelena Rum are all products you can try at the tasting room, as well as limited, small batch release spirits like their Coffee Liqueur, Crème de Cacao Liqueur, Katun Rum and Krogstad Gamle Aquavit.  The company has even done a Shōchū, a spirit distilled from rice, barley, sweet potatoes and buckwheat or brown sugar, in collaboration with a Japanese company.  (“It was an interesting day at House Spirits when 600 pounds of rice was delivered,” Munroe said.) 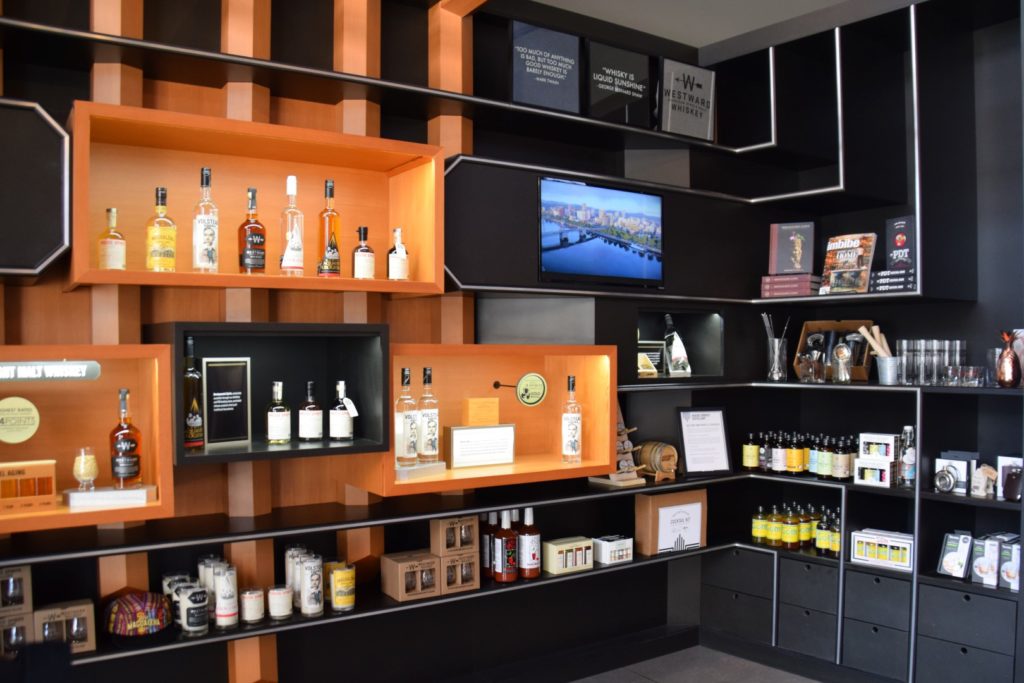 My tour concentrated primarily on the production of their single malt whiskey. When House Spirits first started making their whiskey, they were making eight barrels a month. Now, they’re making 20 barrels a week, and distribute nation-wide. But it’s still a made in small batches and it is still a waiting game. Good premium whiskey simply needs to age. Instant gratification, it’s not. But pride—and quality—comes from doing it right.

It Starts with the Grain … and the Water

It starts with the grain; barley in this case.  Our tour begins outside, at the company’s 75,000-pound grain silo. It’s filled with barley grown in the Pacific Northwest. Last year, they went through 1 million pounds of it. The preference may be to use all Oregon-grown barley, but access and quality are important, so going beyond Oregon is still necessary. 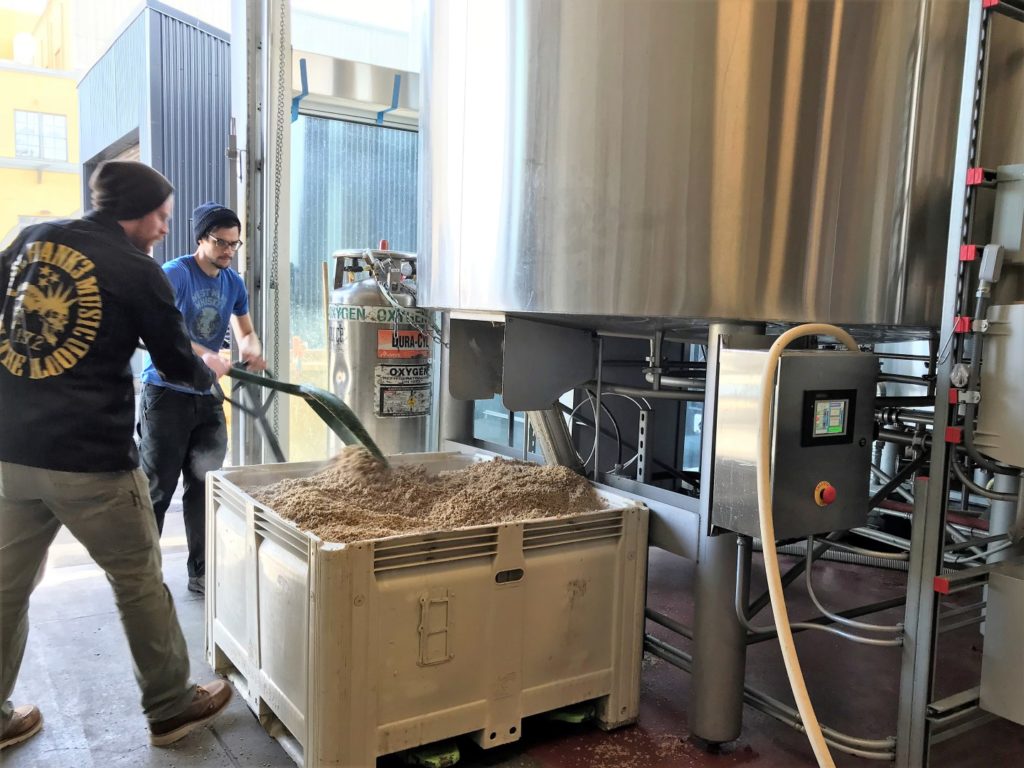 The grain passes from the silo to a splitter. Since we’re in Portland, the water comes primarily from the Bull Run Watershed, which serves a quarter of Oregon’s population. The water comes from rain and mountain snowmelt. This is the water that spurred the craft brewing movement, and it’s serving the craft distilling movement just as well—wonderful stuff. 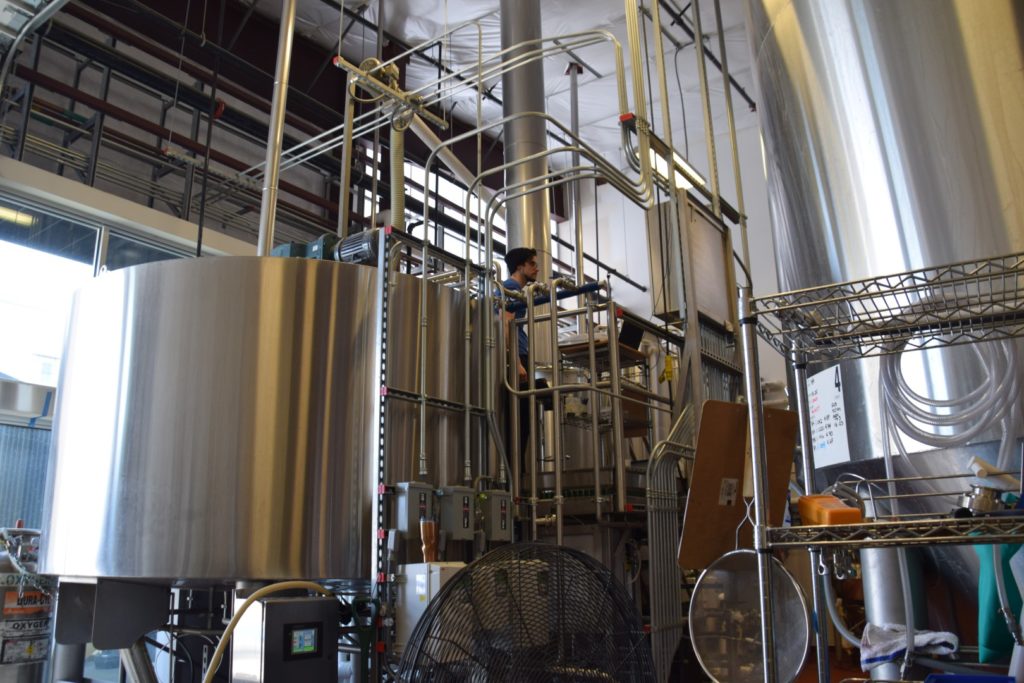 When mixed with water, the grain makes its starches and sugars.  Malted barley is germinated barley that has been germinated by soaking it in water, which converts the starches into fermentable sugars. The germination process is then stopped by drying the grain with hot air. Everything is closely watched and recorded by both the distillers and computer.

The fermentation process is of utmost important. This is where the flavor and aroma will come from, Munroe says. This surprises me. When I think of whiskey, I know good water and good grain is important, but I think of the barrel aging process as key to flavor.

“Most whiskey is used making distillers’ yeasts,” Munroe, says.  “I started out brewing beer. So did Christian and so did the rest of us. We found that distillers’ yeasts cook faster, hotter than the ‘001’ brewers’ yeast we were used to using. We decided we like 001 better. It brews slower and gives better aromatics.  Fermentation usually lasts five days. Rush nothing.”

Most whiskeys are fermented for half that time. The downside to their method of fermentation is that it gives less “wash” in the end. Three thousand gallons of this wash will eventually yield only five barrels of whiskey.

“’Wash’ is a giant batch of sugar water,” Miles explains. He gives us a sample. It’s light wheat-colored, cloudy/unfiltered, and actually tastes very light and pleasant, very much like beer, with flavors reminiscent of a Hefeweizen.

“This is also the pasteurization process. Cleanliness is of utmost importance. If contaminants get in, it can ruin the whole batch.” He sprays the spigot he used to pour us a taste of the wash with decontaminant and wipes it down. 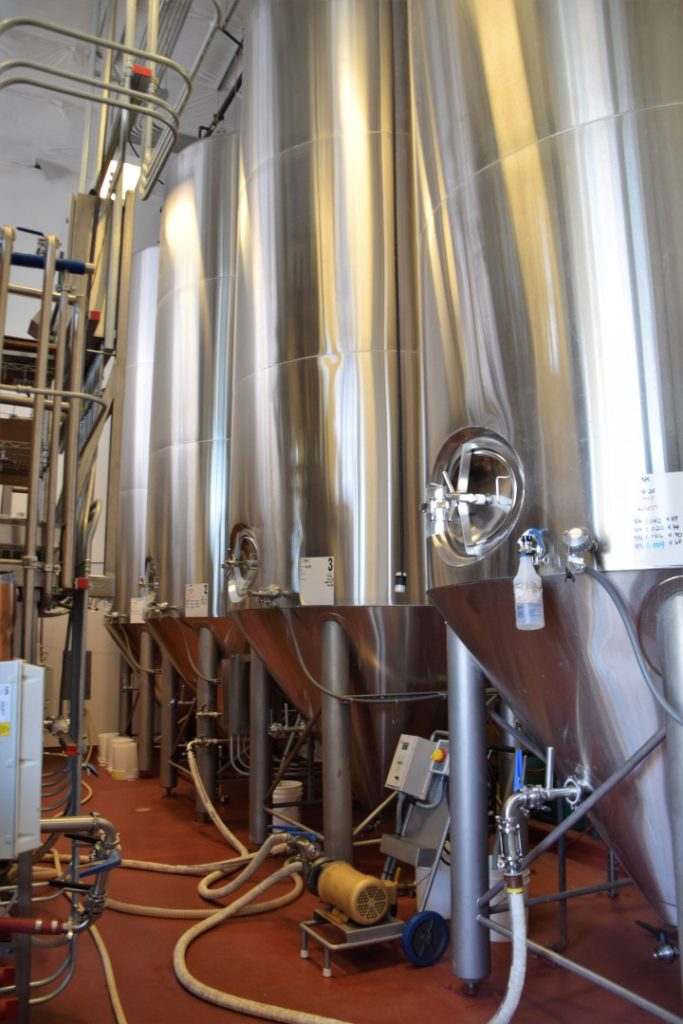 Tanks contain the “wash” that will become single malt whiskey

Distilling is the process of concentrating the alcohol down. In distilling, the compounds—water and alcohol—have two different boiling points. While the alcohol boils, the water does not. The whiskey is distilled twice; “pot-stilled” in a 3,000 gallon custom-made still from Vendome, the Louisville whiskey still manufacturer. House Spirits’ is one of the largest and has been custom designed to include a “bell” or “onion” top that helps bring up the flavors House Spirits’ distillers are after.

Essential to the distilling craft, is determining the head, heart, and tail of a batch. The initial whiskey that comes from the still is the “head.” It’s got a higher ethanol percentage and is not used. The “tail,” the last of the whiskey to come from the still, has too harsh a taste that is too smoky and too harsh.  It’s the “heart” that the Distiller bottles. This is what they’re working for, and knowing when to make the cuts are key.

In the end, 700 gallons of whiskey ends up as 250 gallons that is actually bottled.

A sample of a number 2 charred barrel

Whiskey barrels are made of white oak, and charred with a rating of 1-7; with “1” having the lightest char and “7” the heaviest. Number “2” charred oak barrels are used to age Westward whiskey. American whiskey requires that all barrels must be new and unused; a major cost. Besides instilling flavor, charcoal is a filter and serves cleansing and preserving qualities. Westward Single Malt Whisky will age for three to four years. (Interestingly, Scotch whiskey allows the use of used barrels and is one reason Scotch whiskey can age longer.)

On your tour, you’ll see some of the barrels, but most are stored in a 20,000 square foot facility nearby. The last stop will be bottling and labeling—some of which is still done manually.

On to the Tasting Room

House Spirits’ Single Malt Whiskey is a premium product. The careful attention to ingredients and each stage of the production process, as well as small batch creation have resulted in a highly rated American whiskey.  I appreciate the apple aromas, balanced creaminess and smooth flavors. Initially, there’s subtle spice and light pepper, with an oaky sweet finish. It’s a modern and refined, wonderful sipping whiskey. 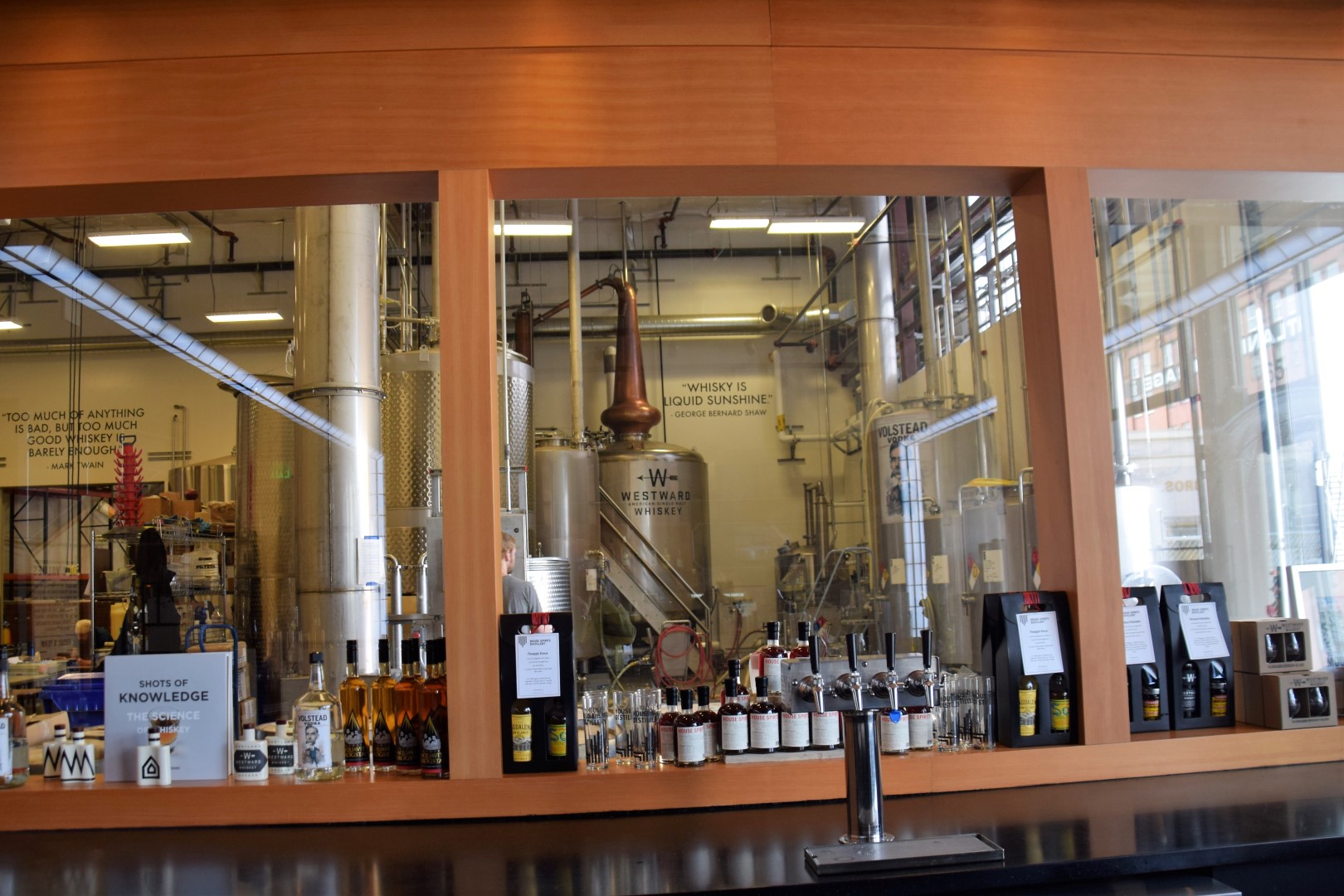 End your House Spirits distillery tour with a stop in the tasting room.  Enjoy a tasting or a cocktail (they have seasonal cocktails on tap) and watch the action through the oversized window that overlooks the distillery. House Spirits also holds cocktail and whiskey classes. Bottles and some gift items are available for purchase. Check their website for more about times and costs. 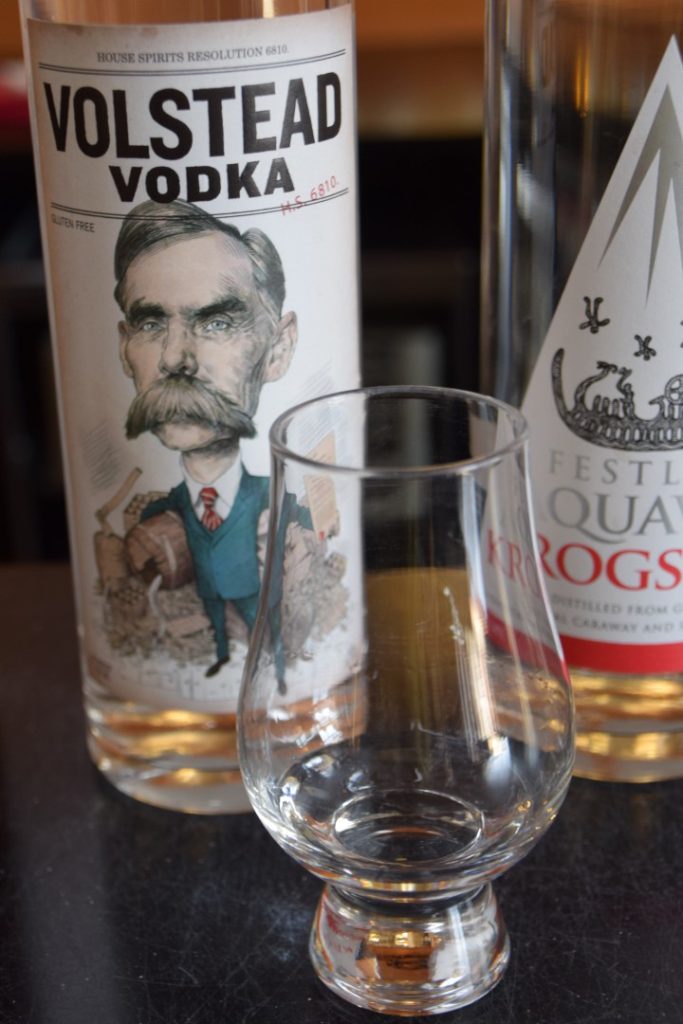 Flying in and out of Portland International Airport? House Spirits has a second tasting room inside the airport. It’s the world’s first airport distillery tasting room. 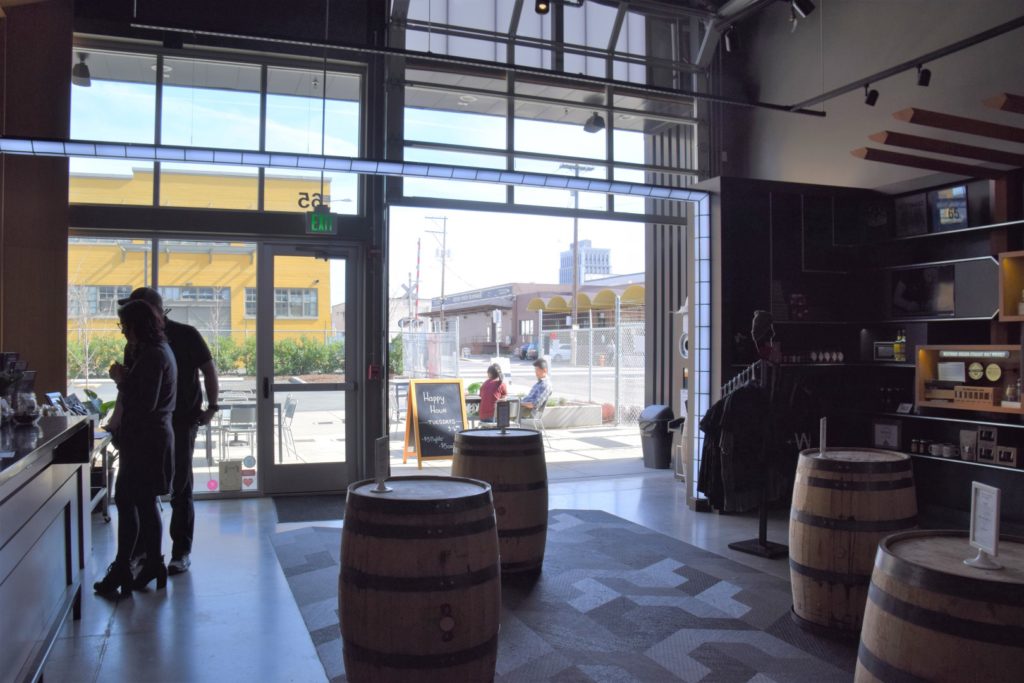 Kick back and stay for a happy hour cocktail 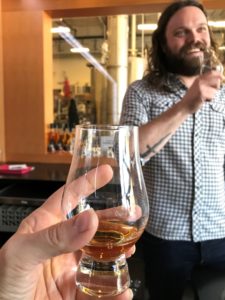