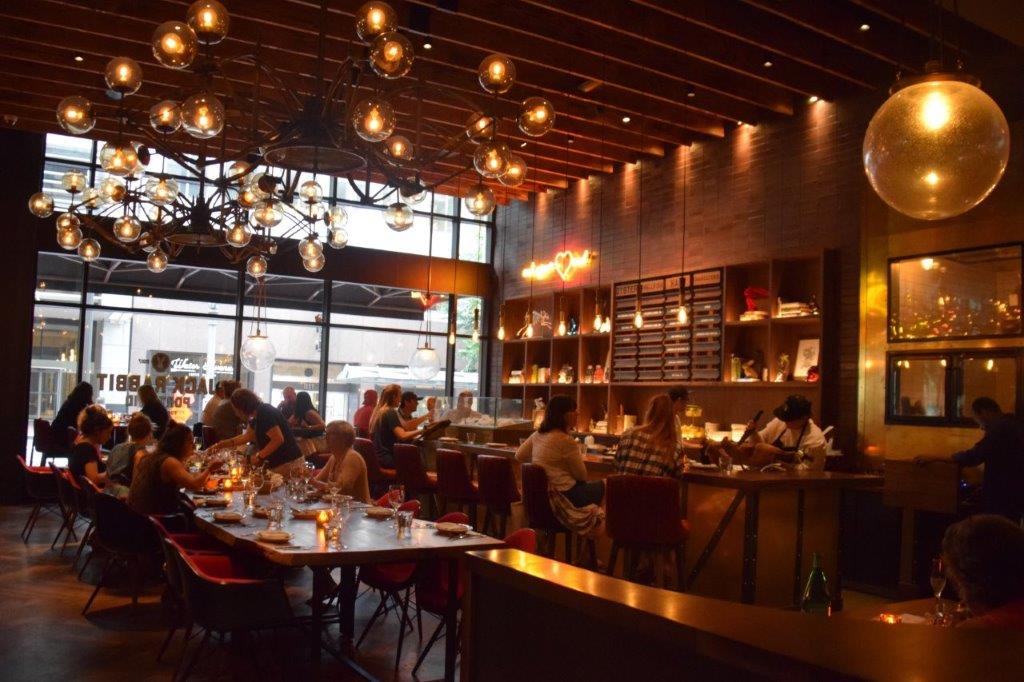 Chef Chris Cosentino’s latest restaurant venture, Jackrabbit, is one of Portland’s most anticipated new restaurants this year. Located in the newly re-designed Duniway Hotel, Jackrabbit has all the makings of becoming a city stand-by. Cosentino tells us, “I’m both nervous and excited about what we’re doing here.” Both the restaurant’s menu and décor reflects Cosentino’s sense of fun. “There’s  a lot of Portland culture here. And definitely a bit of Alice in Wonderland going down into the rabbit hole,” he laughs. 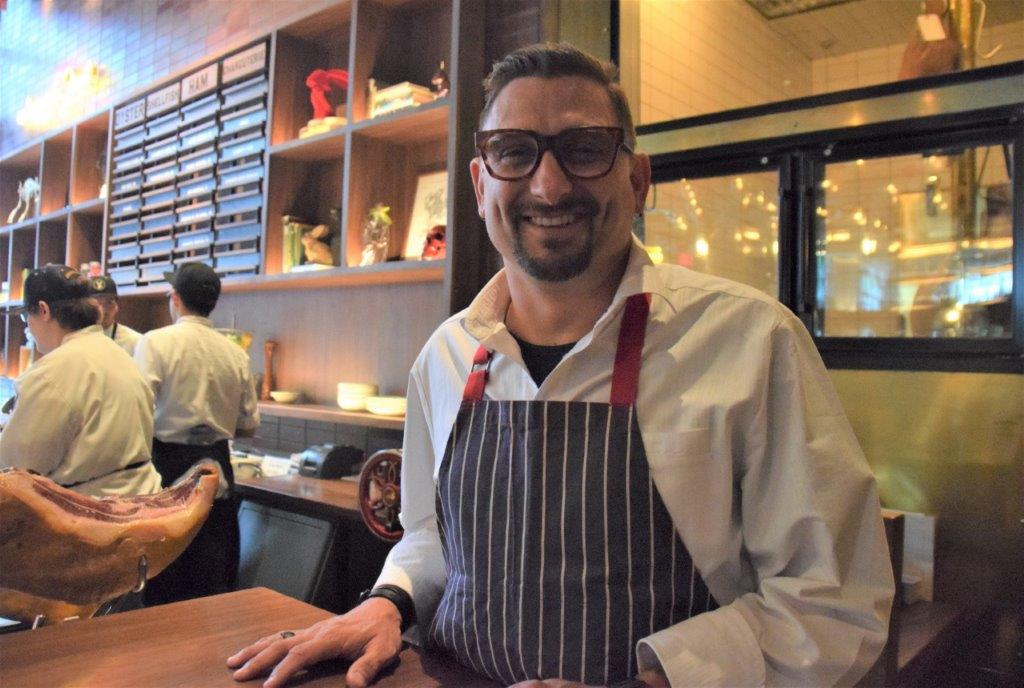 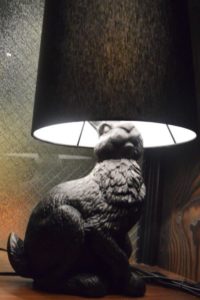 Cosentino is high-energy, funny and willing to share his stories in full, vivid color. He’s both a Top Chef Masters winner and Next Iron Chef competitor. A veteran restaurateur, he’s partnered again with Oliver Wharton, with whom he owns Cockscomb in San Francisco.

Why Portland? Cosentino will remain based in San Francisco but make frequent trips to Portland, a city he already knows well. “I wouldn’t do anything here unless I liked the city and the people.” He’s been coming to Portland for years. He’s a fan of the Timbers, he cycles, and already participates each year in such major Portland food events as Feast and Nicky USA’s Wild About Game. “Portland [food] products are through the ceiling, and the people in this industry are great.”

Day to-day operations will be headed by Executive Chef Chris DiMinno. DiMinno returns to Portland (he spent five years in the city as Executive Chef at Clyde Commons) and is himself a James Beard chef. On the night I’m there, both Cosentino and DiMinno could be seen popping in and out of the kitchen, manning both the stove and making table rounds to check in on guests. 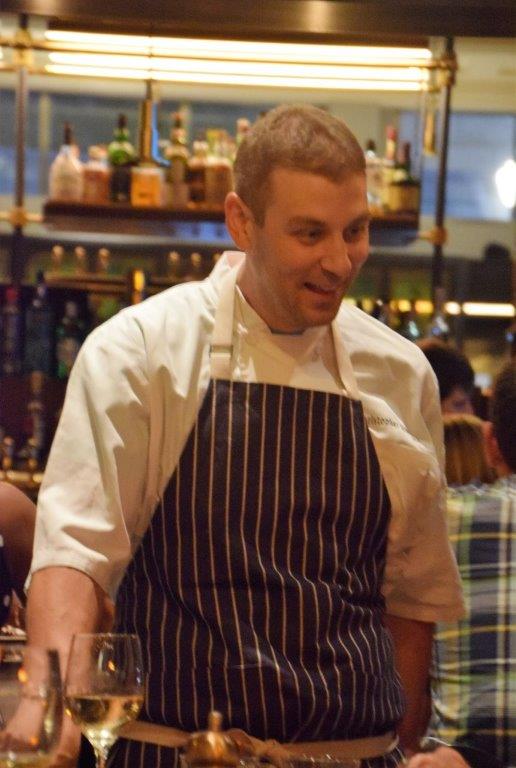 “Food is about engaging. It’s about who you’re with and what you’re eating. It’s about making it fun and getting together with people,” Cosentino says, adding slyly, “It’s giving people the experience of eating with their hands sometimes.”

Sharing starters and salads fosters that community feel at the table. We start with the French Onion deviled eggs, which include Dijon mustard and both fried and pickled onions. 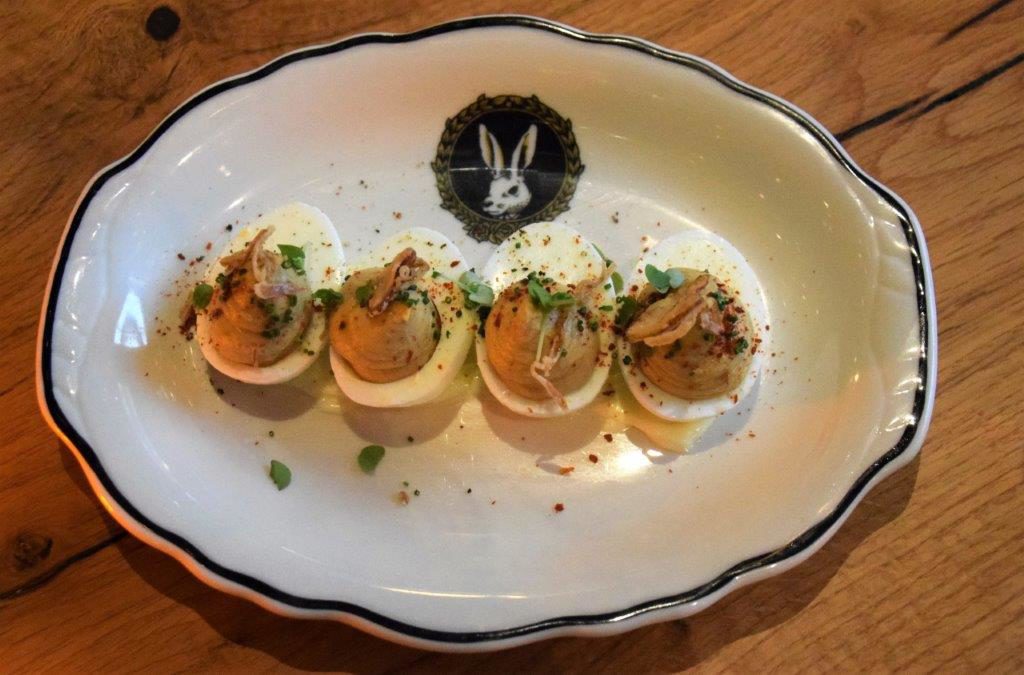 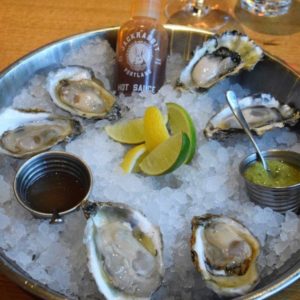 Sample from the restaurant’s raw bar.

Oysters are next, with a tomatillo salsa and an herb vinaigrette to boost the flavors of the mollusks. (The Daily Board tallies the daily oysters, shellfish, carved ham and charcuterie.)

If you enjoy some heat, do order the chicken wings. They’re coated in a spicy chili paste and are “fall off the bone” tender.

The cucumber, tomato and peach salad exemplify the adage, “things that grow together, go together.”  The pistachios and Zinfandel vinaigrette add just the right zing to the combination of flavors. 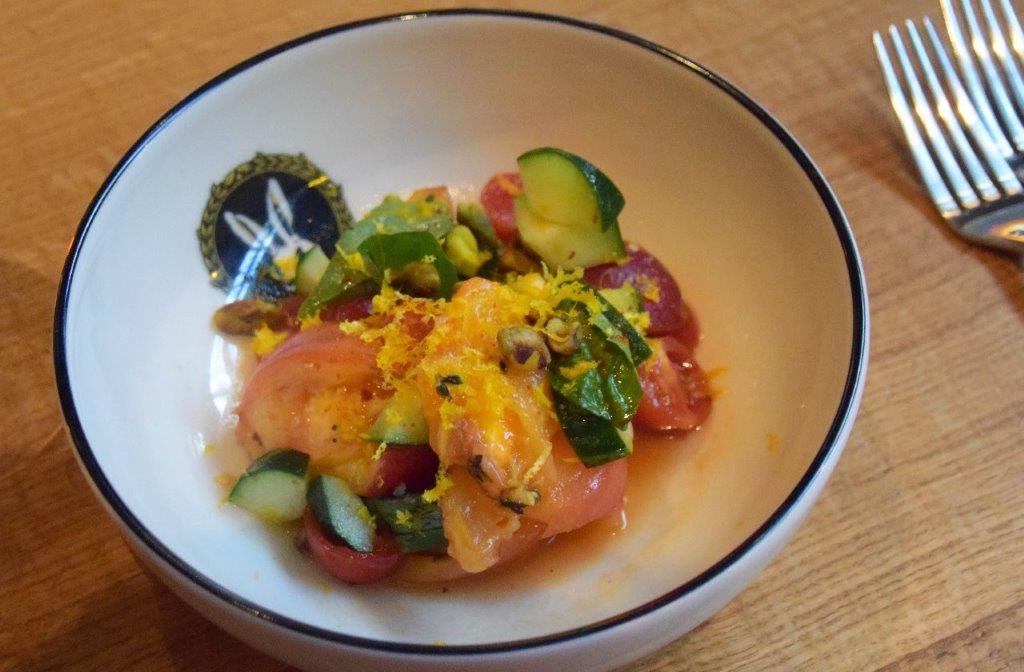 Salads are fresh, local-sourced and creative. 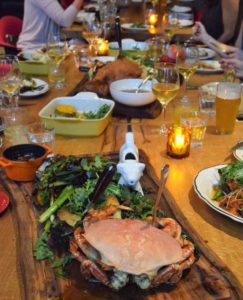 And out comes whole BBQ Dungeness crab—no nutcrackers, no little forks. We’re not shy; we pick away happily at the sticky and sweet and moist crab meat.

To up the ante on a communal edge to a meal at Jackrabbit, consider one of the shared entrées. There’s Braised Rabbit (featuring 80 cloves garlic, rosemary and carrots), the (4-pound) Pinbone Steak, and the Pig’s Head (with “brainaise,” a house mix of pig brains and mayonnaise).

The Pig’s Head is met with fanfare and humor at our table. (Although it won’t make the squeamish any less so, it’s actually a severed half head.) The meat is dark and succulent and flavorful. The crackling is thick and fried a beautiful amber, crunchy and satisfying. This too, we pick at with our fingers. The greens bring some bitterness to the sweet meat and is garnished with some lightly fried chiccarones. 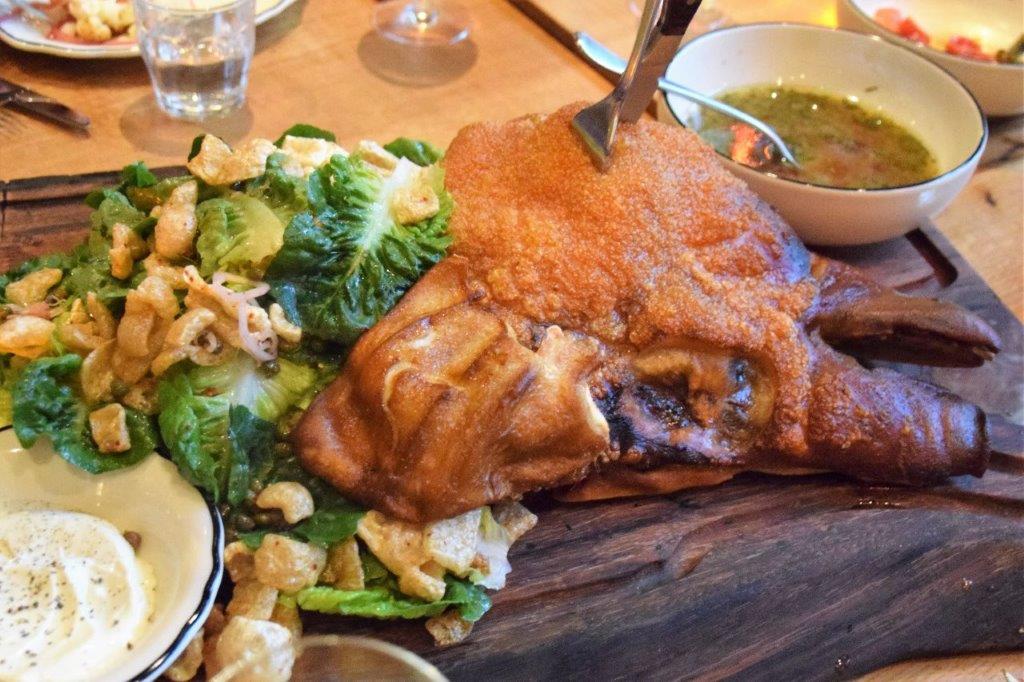 The Pig Head displays Costentino’s philosophy of “head-to-tail” cookery, and skill at cooking meat to its succulent best.

The Cauliflower is a whole head, roasted in their wood oven. It’s served with tangy harissa, pickled onions, cilantro and pistachios. Again, the flavors are rich and satisfying.  Add some roasted carrots and our feast was more than complete. 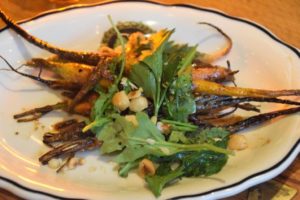 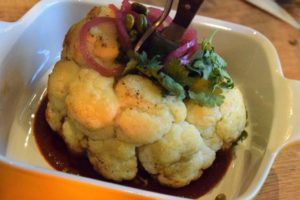 Other entrees focus on other meat, seafood, veggie and grain dishes, as well as sandwiches and pastas. Something for everyone.

Consentino’s own homemade cider, Offal Good Cider, carried me through from appetizers through entrees. It’s French-style and unfiltered, and as Cosentino says, “-a little barnyard, a little funk.” He’s also collaborating with Ringside restaurant on a beer. 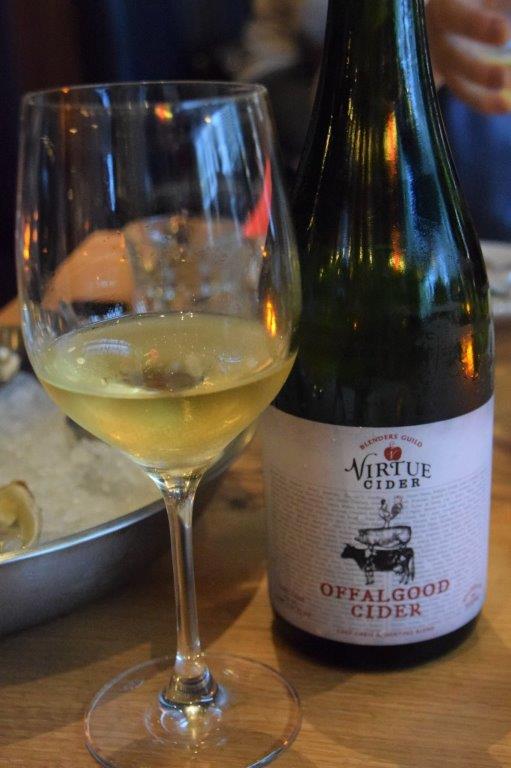 With a menu heavy on darker meats, you’d expect a lot of red wines, yes? He’s got some strong opinions on this, although you’ll find a good sampling of reds available. “Have a palate check,” he advises. “Personally, I can’t drink red wine, bourbons, the oaks; I just can’t do it. Red wine is very dominating, whereas whites, especially those with effervescence; these work well with what we’re serving here.”

The restaurant features a selection of almost 100 gins and the house Negroni mixes Union Gin, Campari, and Punt E Mes. Cosentino likes to cook with herbs and the botanicals in gin lend the same type of appeal. 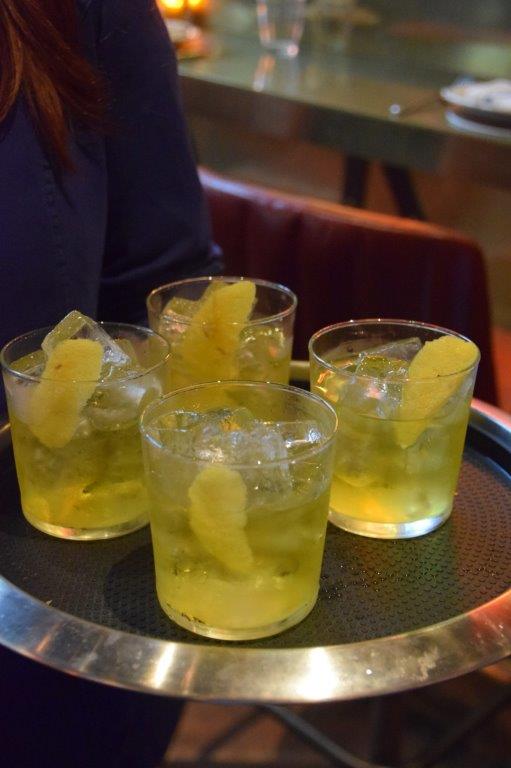 We end our meal with a desert board. After the heartiness of the dinner dishes, Pastry Chef Julie Cogley’s desserts brought a lightened finish to the meal. Most felt light anyway because they featured fruit. (Perhaps too her skill belied the caloric intake.) Regardless, don’t skip dessert. 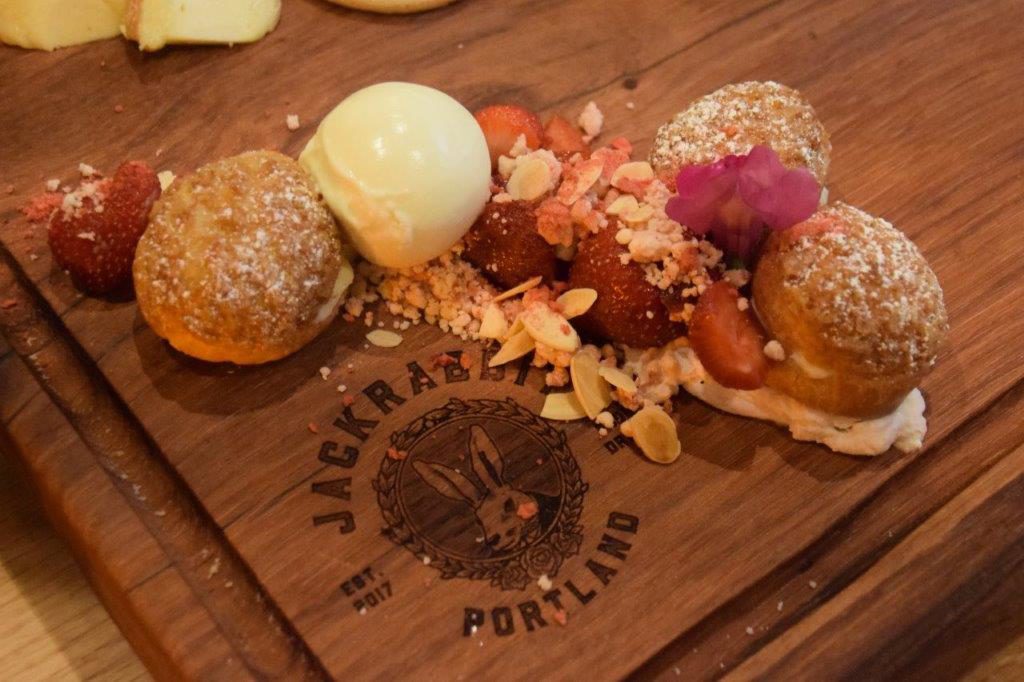 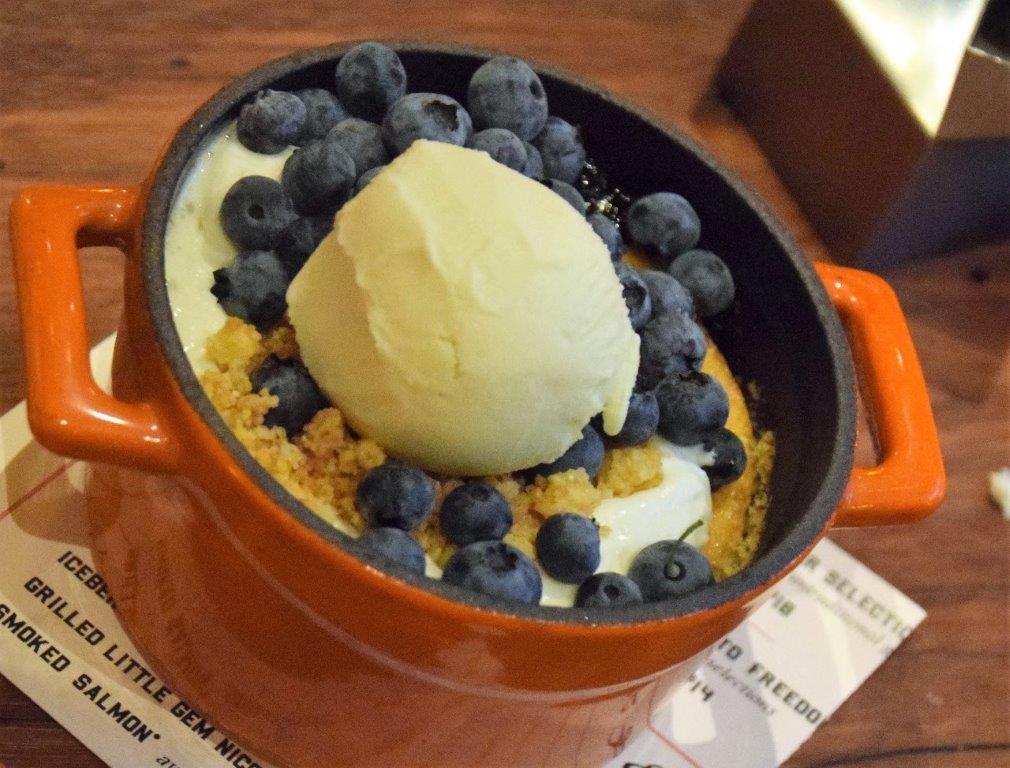 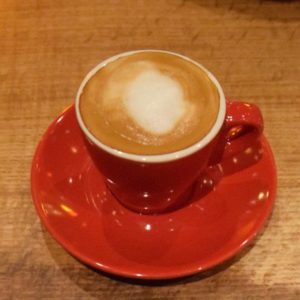 Yes, Portland is a coffee town; and Cosentino is a coffee man, so he chose his brand of coffee carefully. He drinks a wonderfully ridiculous number of piccolo lattes a day.  While the restaurant sources most ingredients locally, he imports his coffee all the way from Australia. “I use Vittoria Coffee in all of my restaurants. It’s that good. It’s consistent. And it’s got a low acidity. There are no broken beans. It’s roasted perfectly and it’s a coffee that goes well with food.” 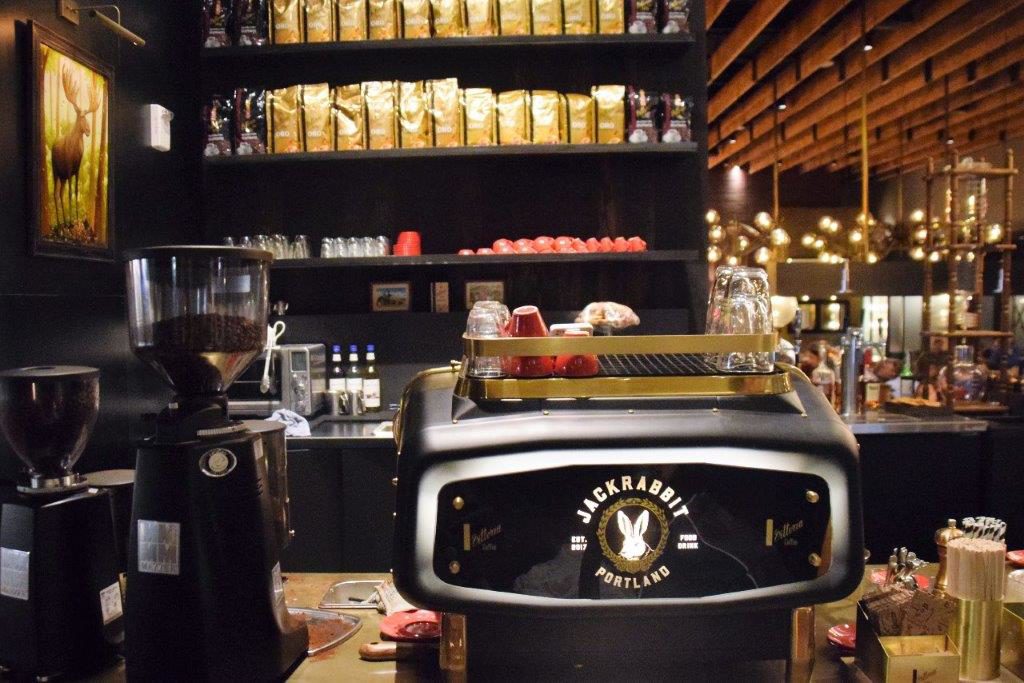 Stop by Duniway Hotel’s lobby for an espresso.

Cosentino is persuasive: he convinced the Duniway to put Vittoria coffee machines and coffee in each room of the hotel. And yes, the coffee is excellent.

Cosentino is tireless, and his varied interests have led to some once-upon-a-time experiences. His first cookbook becomes available at the end of this month. Ten years in the making, Offal Good: Cooking from the Heart, With Guts balances “how-to” knowledge and tutorials with 150 recipes. The book can serve as a manual for the home cook who wants to move into “head-to-tail” cookery. It includes artwork by his friend, the artist Jeremy Fish, who also created Jackrabbit’s logo and designed a pair of sneakers for Cosentino that features the chef himself. 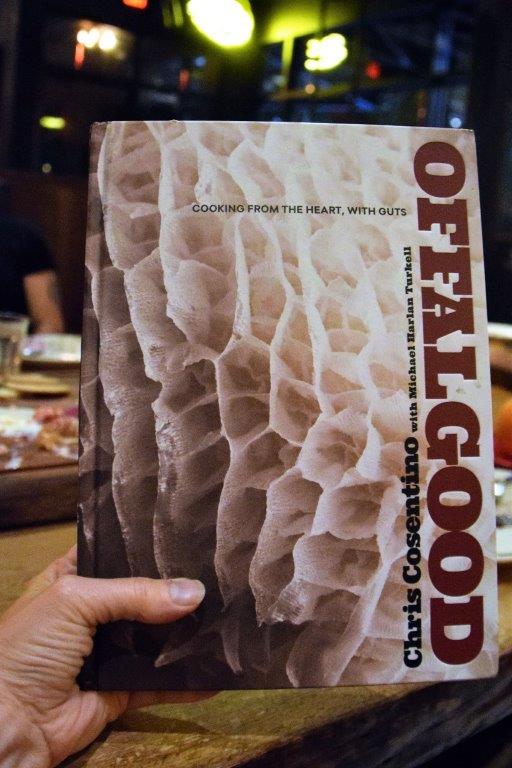 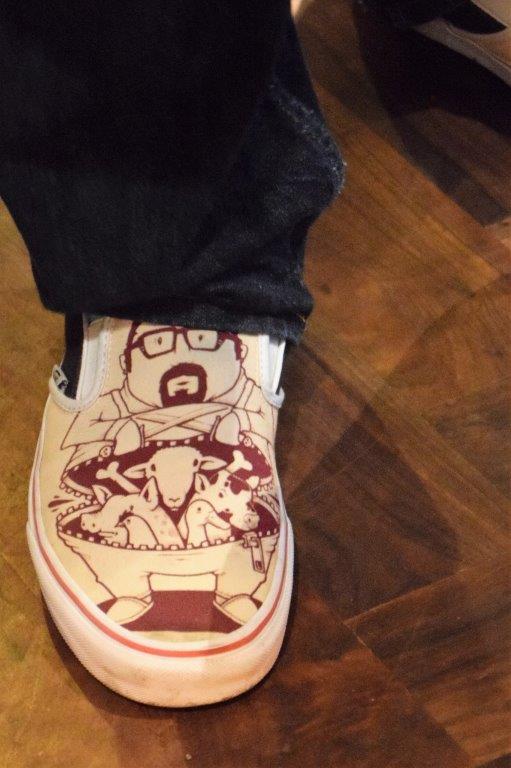 Write a comic book, starring yourself? Cosentino grins. He knows people, after all. And so, he wrote a story for Marvel Comics starting himself and Wolverine. One hundred-and seventy-five thousand color copies 75,000 B/W copies were printed. 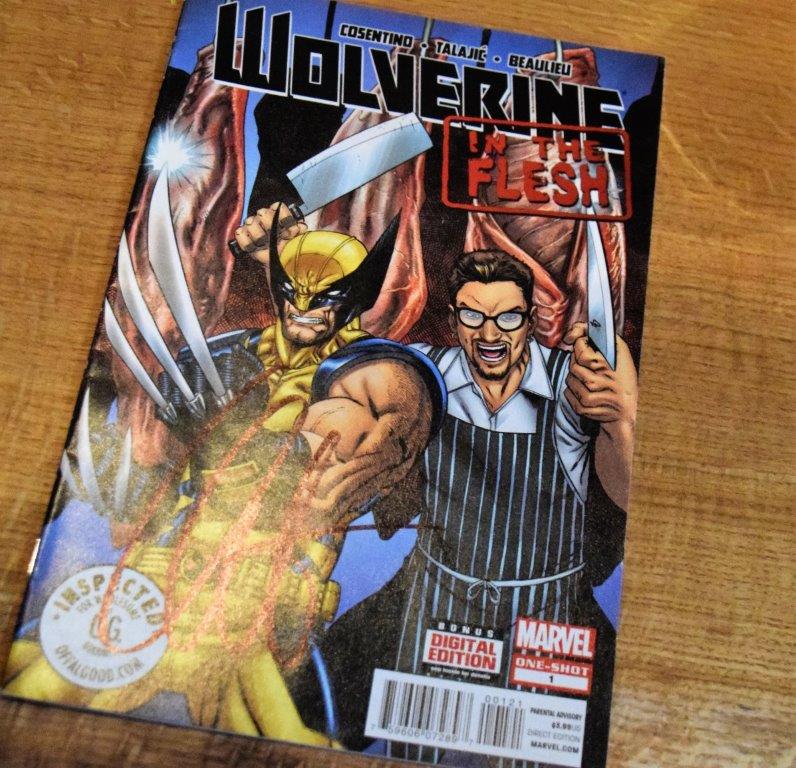 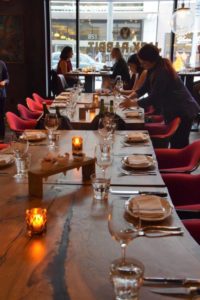 The fun is in the details. The plank wood tables at which we’re seated were cut from a length of a single tree, and then cut in two lengths, each about 8 or 10 feet long. The temperature-controlled “ham room” with house-cured meats is on display as you pass through to the private dining rooms. As homage to Portland’s strip club scene, hams hang on an improvised stripper pole. The centerpiece chandelier is nine-feet in diameter and constructed of bicycle frames, giving tribute to the city’s bike culture. Rabbits and jackrabbits  adorn, and if you’re not easily offended there’s a “colorful” rabbit painting you should see.

Luring Us Back For More

Jackrabbit is an exciting addition to the Portland restaurant scene and to downtown dining. Cosentino says, “I want people to crave our food. I want them to walk out and say, ‘I want the — next time.” 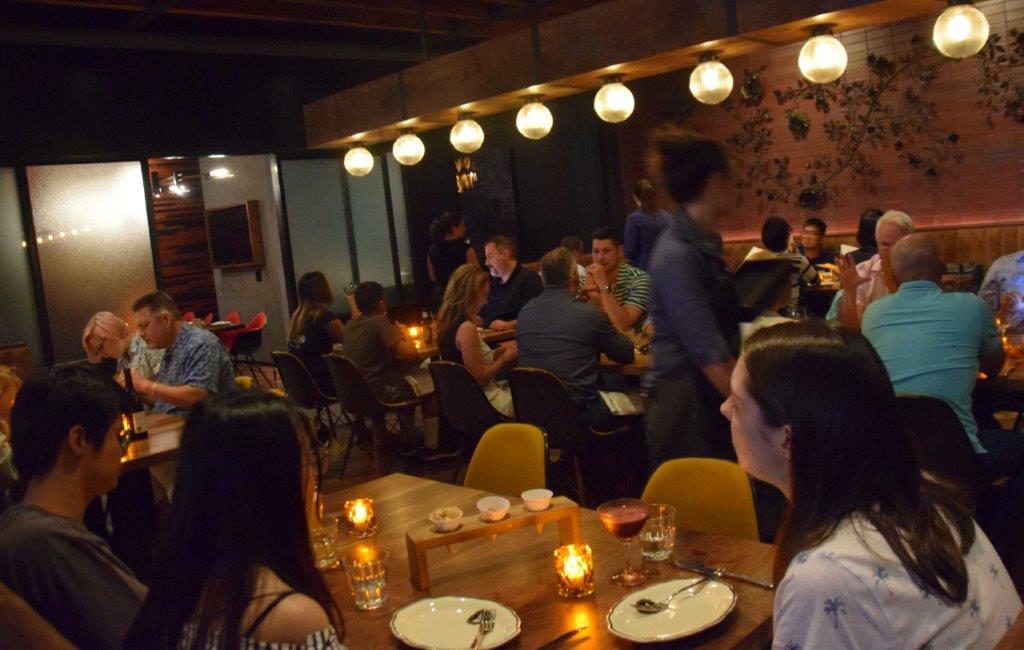 How to Spend Three Days in Madrid