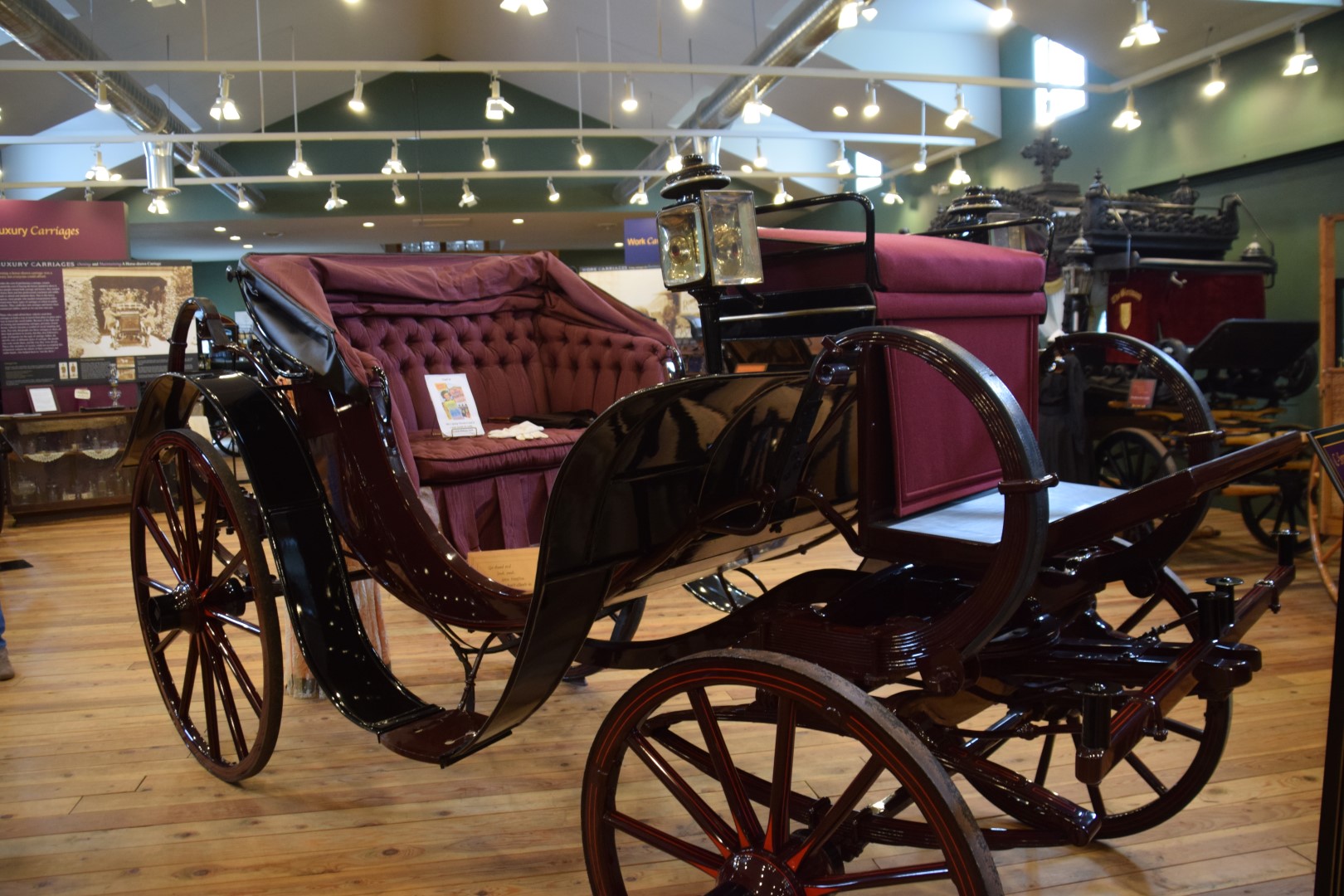 Just about anywhere in the U.S., you can travel a state or county road and find a museum with a collection that somehow just makes your day. But the Northwest Carriage Museum in the small town of Raymond, Washington is a cut above. The museum houses a world-class collection of horse-drawn carriages, buggies, carts, wagons, and sleds from the 19th century in an inviting, well-designed space.

The Northwest Carriage Museum is a trip that should be made by vehicle buffs, history buffs, kids and families, and techie and engineering buffs. It’s also for just about anyone else who can appreciate a good story—because there are many here.

A Collection Acquired by Donation and Restored with Care

The museum opened in 2002 with a collection of 21 vehicles donated by local residents, Gary and Cec Dennis. The Dennis family saw their collection was growing to the point where it needed to be shared.

“We love keeping history alive,” says Laurie Bowman, Executive Director of the Museum. “We opened with our initial local collection and we now have 55 vehicles,” she told us. “All but several carriages have been donated. Word just keeps getting out about what we’re doing, and we get more offers of donations.”

Laurie’s husband, Jerry Bowman, became involved with the museum in 2005, soon after Laurie did. He currently serves as Museum Curator.

“Jerry’s love of history and woodworking was a perfect fit. He does most of the restoration. It’s really more conservation than restoration, because the goal is to keep the vehicles as original as possible. His passion for the museum—and the carriages—has been instrumental in growing the collection.” 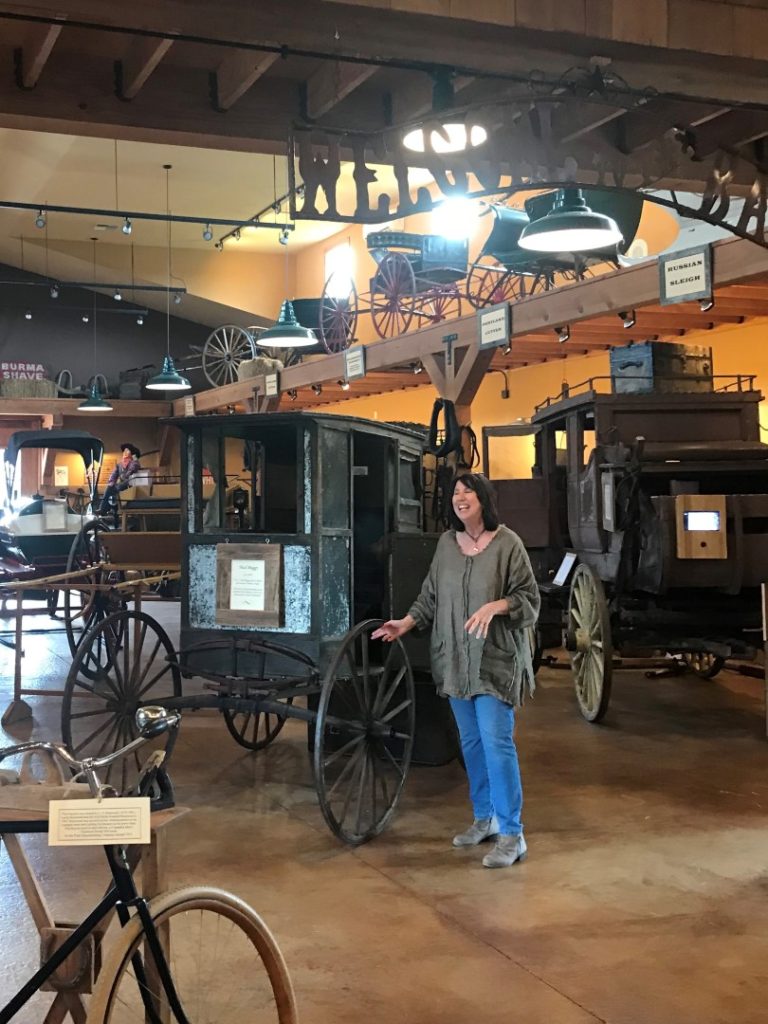 Laurie’s got the stories on the carriages. She knows how the museum came to acquire each and what had to be done to bring the carriages back to their original shiny and buffed condition. She knows the manufacturing companies and the history behind the designs.

Tour through the museum’s collection of luxury carriages and you’ll leave with a greater appreciation of all that went into the design and craft of these horse-drawn carriages. The workmanship on the vehicles is often gorgeous. You’ll no doubt admire the iron work, woodwork and decorative carvings, leather, painting, the brass fittings, and more. 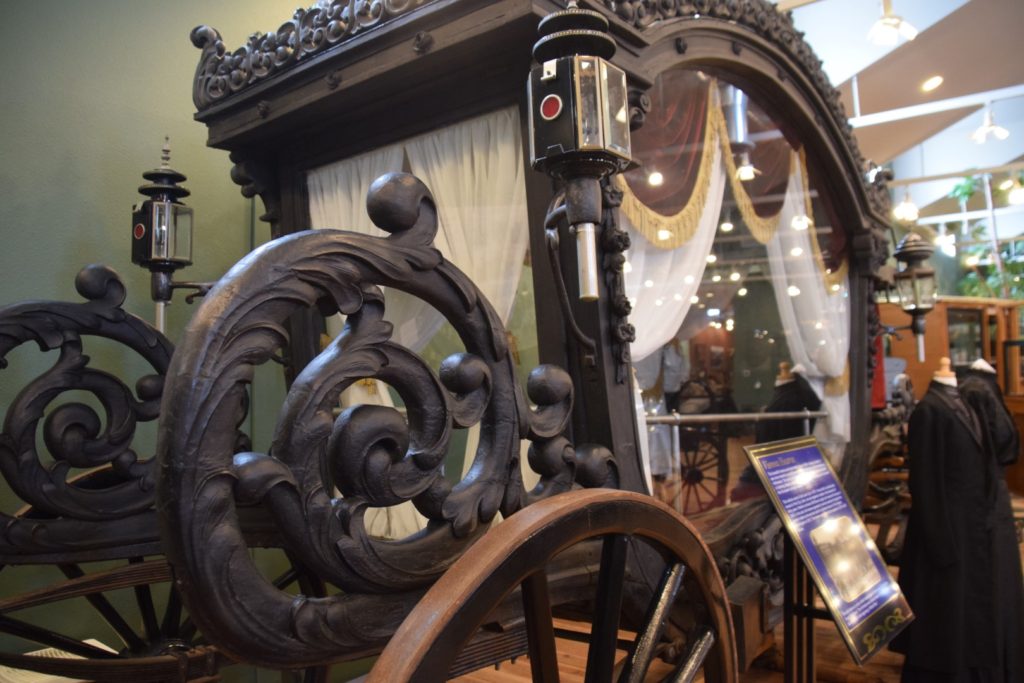 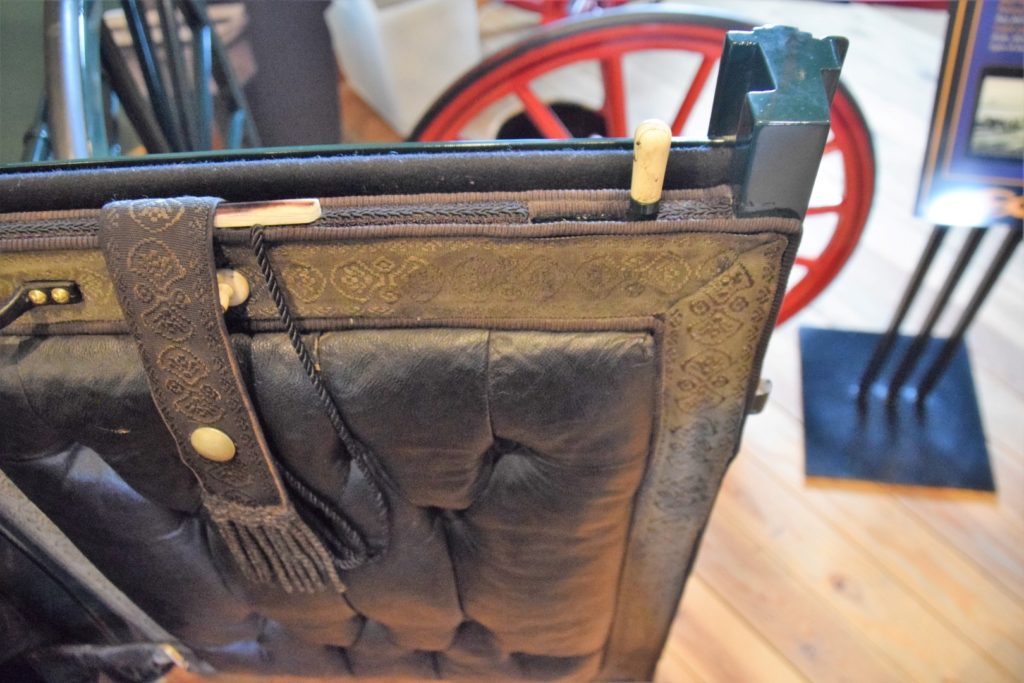 A smart window design. Notice the ivory, leather, and brocade on this carriage (Photo Nancy Zaffaro) 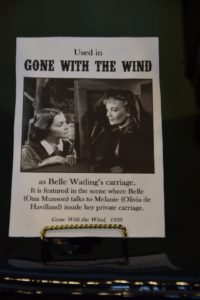 Perhaps the most famous carriage in the museum’s collection is their Shelburne Landau. “Landau” refers to the convertible top. This type of carriage was used by the wealthy in America and aristocrats and royalty in Europe. The design originates in Landau, Germany and the design was considered difficult to build because of the heavy top.

But it’s the specific Landau that the museum has that is particularly fun to see. Their carriage was used in Gone with the Wind (1939) and Jezebel (1938). 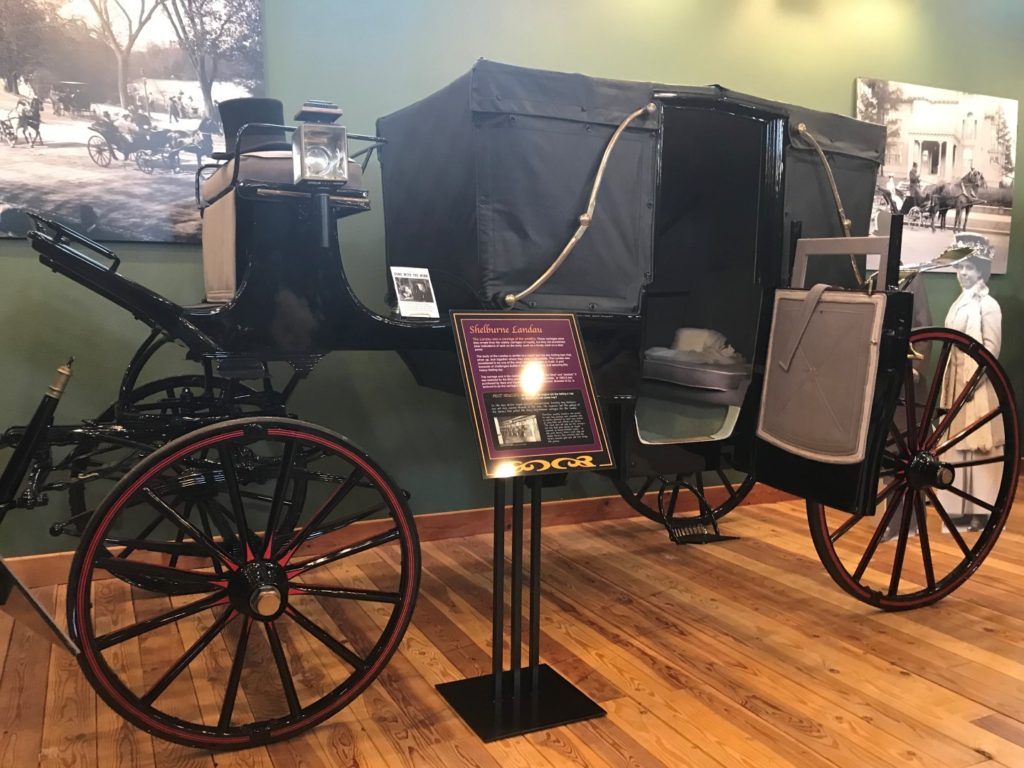 Many wealthy families owned more than one carriage, of course. Their Wicker Phaeton was considered to be a feminine design and would not have been a family’s primary vehicle. The “cut under”  design made sharp turns in city streets a little easier. But picture its use for an afternoon ride on a sunny day. And I’m sure the ladies of the house had just the right matching straw hats for the occasion. 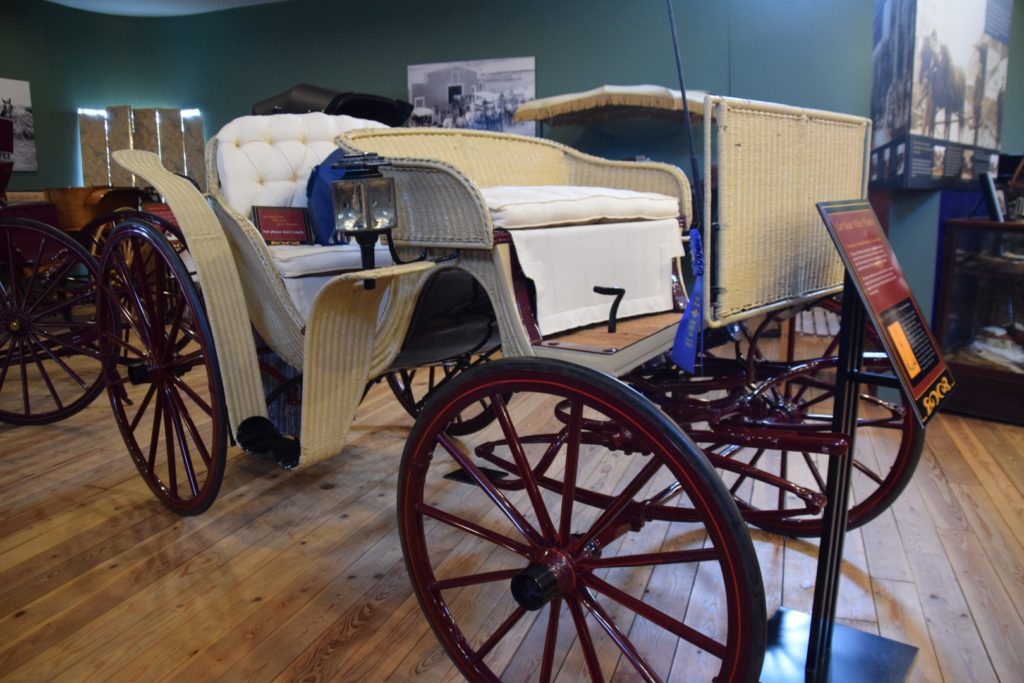 A “cut under” Wicker Phaeton. This “woman’s carriage” has a low entry to make it easier to get in and out of with long skirts (Photo Nancy Zaffaro)

Most carriages of the era were painted. As this one was being restored, it was noticed that the wood grain was worthwhile. They decided to leave it in its more natural state. 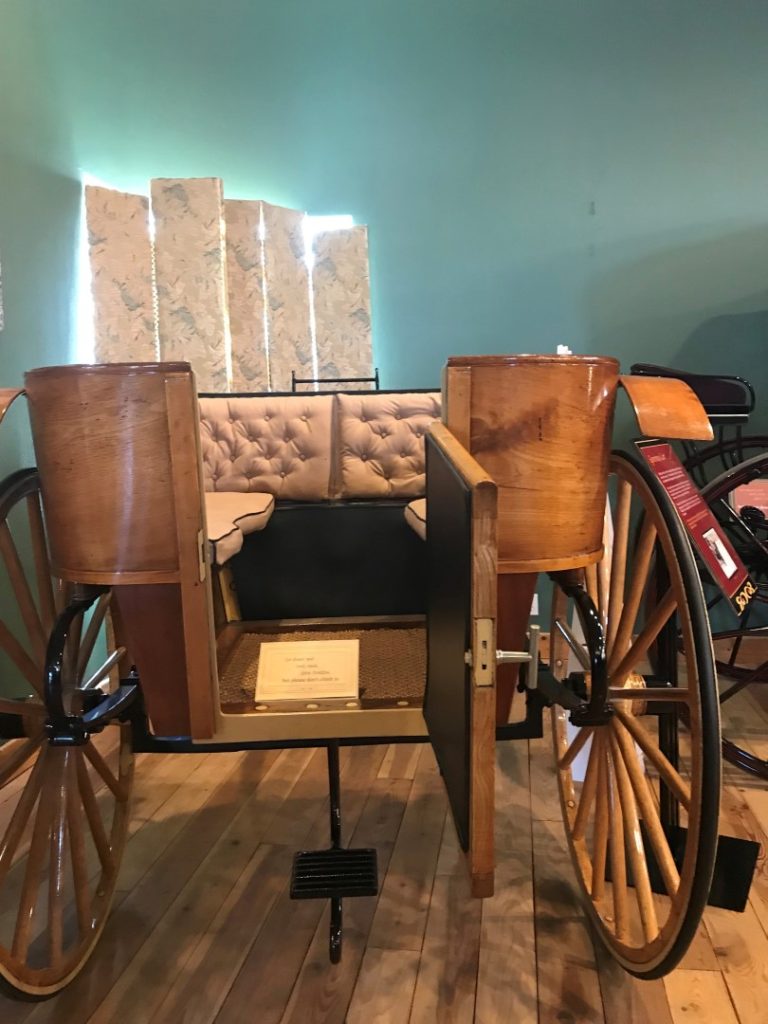 Yes, You Will Probably Have a Favorite

I initially tried to keep track of my “favorite” carriage. It was a futile attempt because each had its own memorable feature, admirable workmanship, history, quirk, or surprise. On the other hand, I admit I was particularly excited to see the “Laundaulette” used in one of my all-time favorite movies, the 1947 version of The Ghost and Mrs. Muir. (Yes, I borrowed the fur draped across the seat for my photo op.) 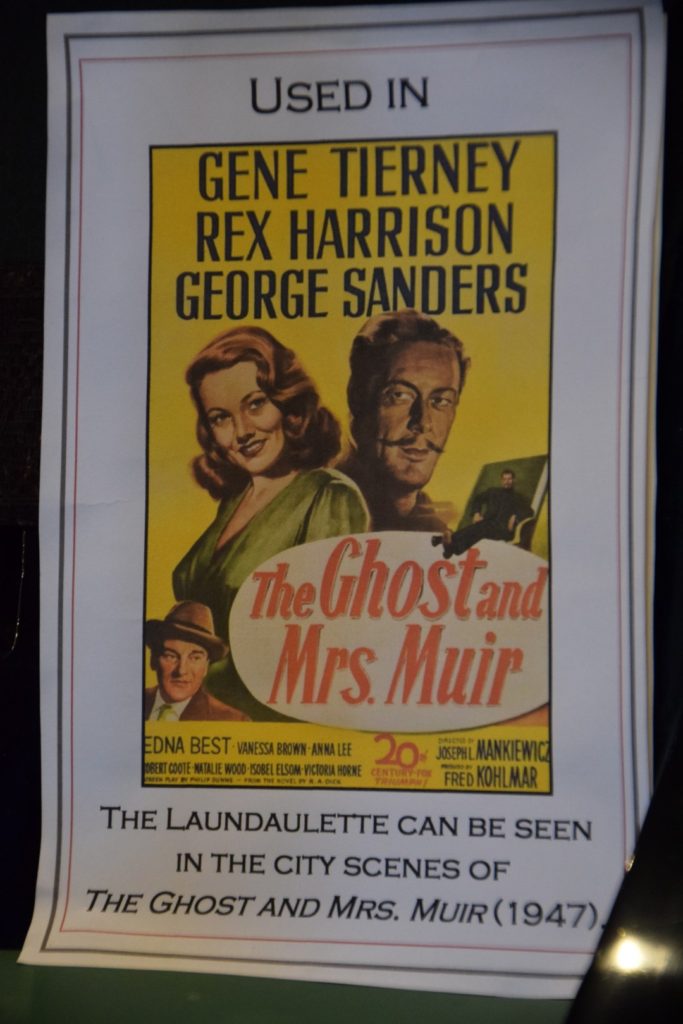 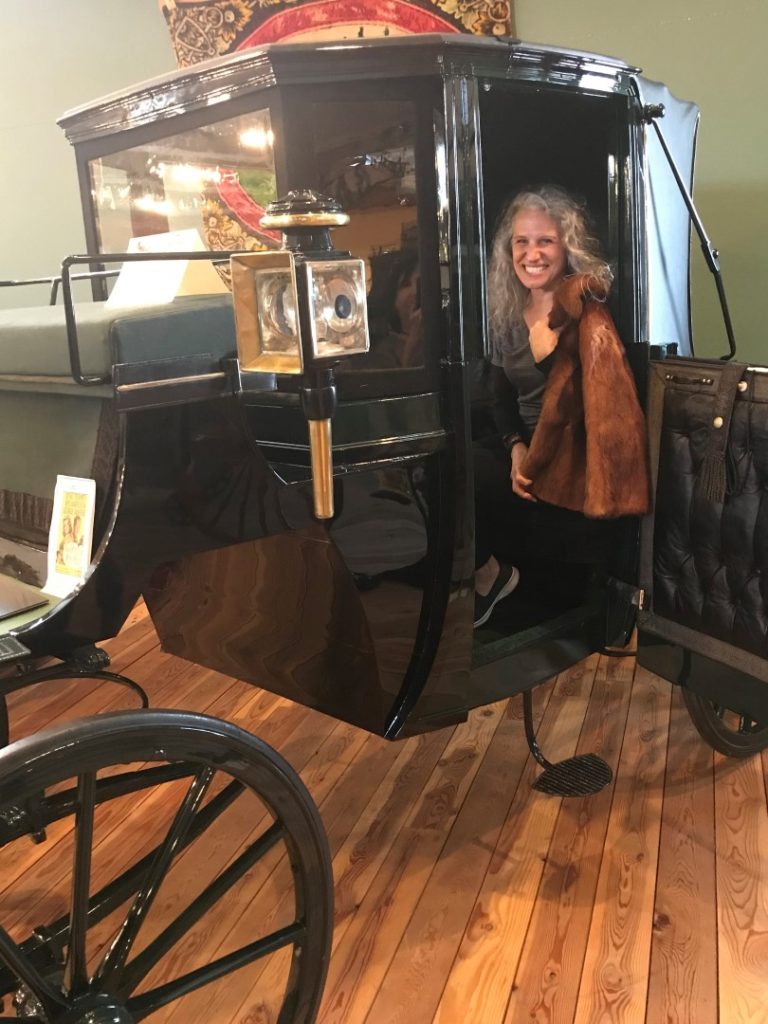 “The Barn” Houses the Working  Vehicles

The Northwest Carriage Museum added a 3,900 square foot wing in 2015. Referred to as “The Barn,” this beautifully designed new space allowed the ability to spread out the growing collection. But it also allowed the separation of the “luxury vehicles” from the “working vehicles.” It’s a division that helps clarify how the carriages were used, who used them, where they were used, and the times and functions of each.

Laurie said, “By having both luxury and working vehicles, we really have the best of both worlds. It’s great to be able to display them this way.” 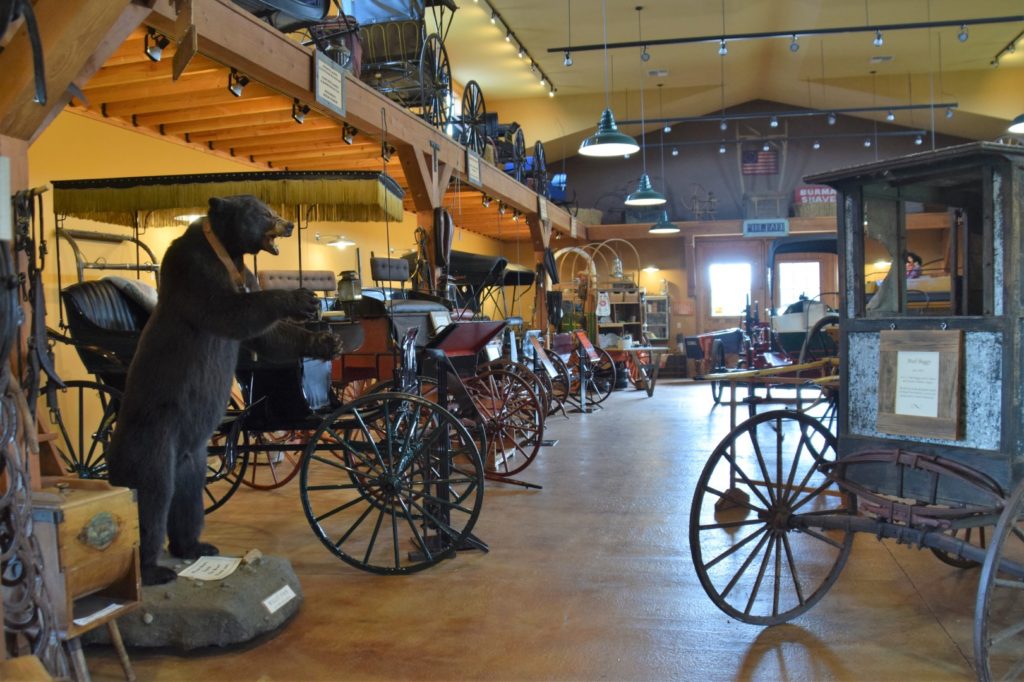 A partial view of “The Barn” (Photo Nancy Zaffaro)

After seeing what the wealthy rode around in, it’s time to see what the rest of us were using. What they lack in ornate ironwork and brass fittings, the working vehicles make up in functionality, smart design and yes, still possess great workmanship.

Perhaps lacking in the opulence of the luxury vehicle, their “fringe top surrey,” a popular design for working and middle class folks, still displays some style. 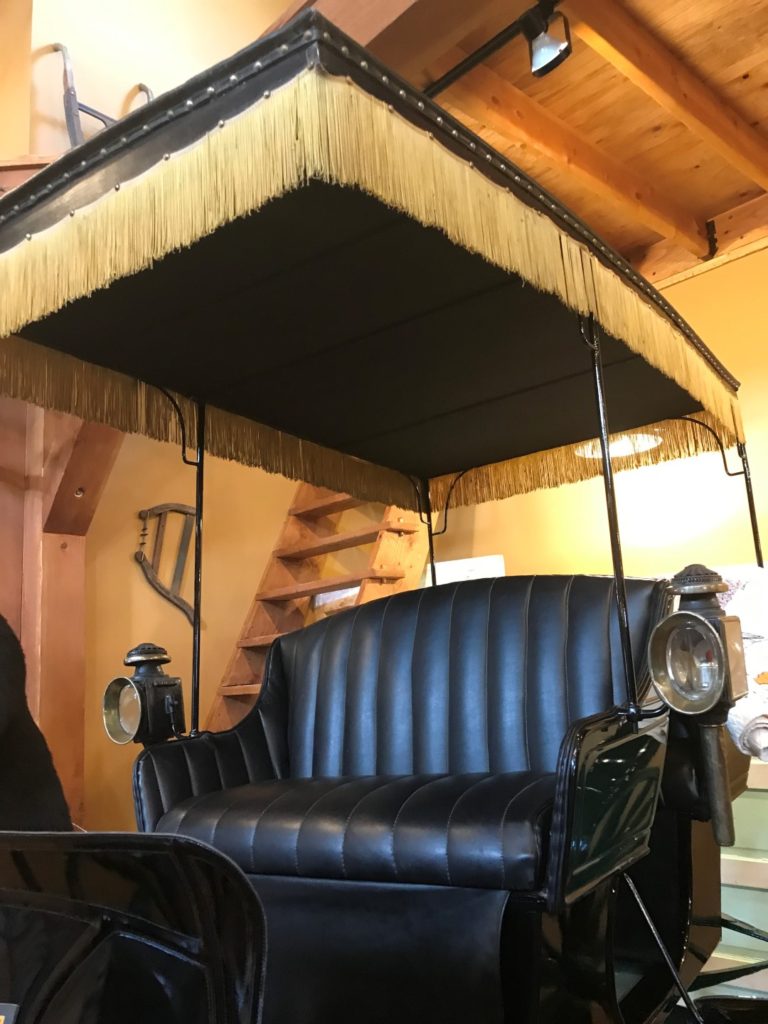 Working Vehicles To Get the Jobs Done 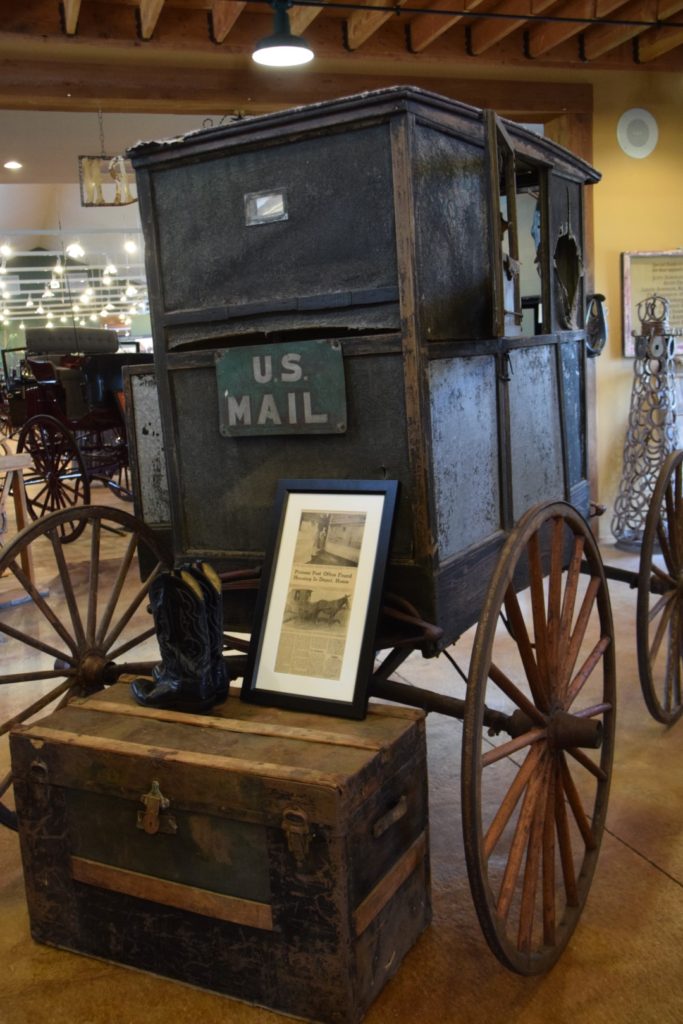 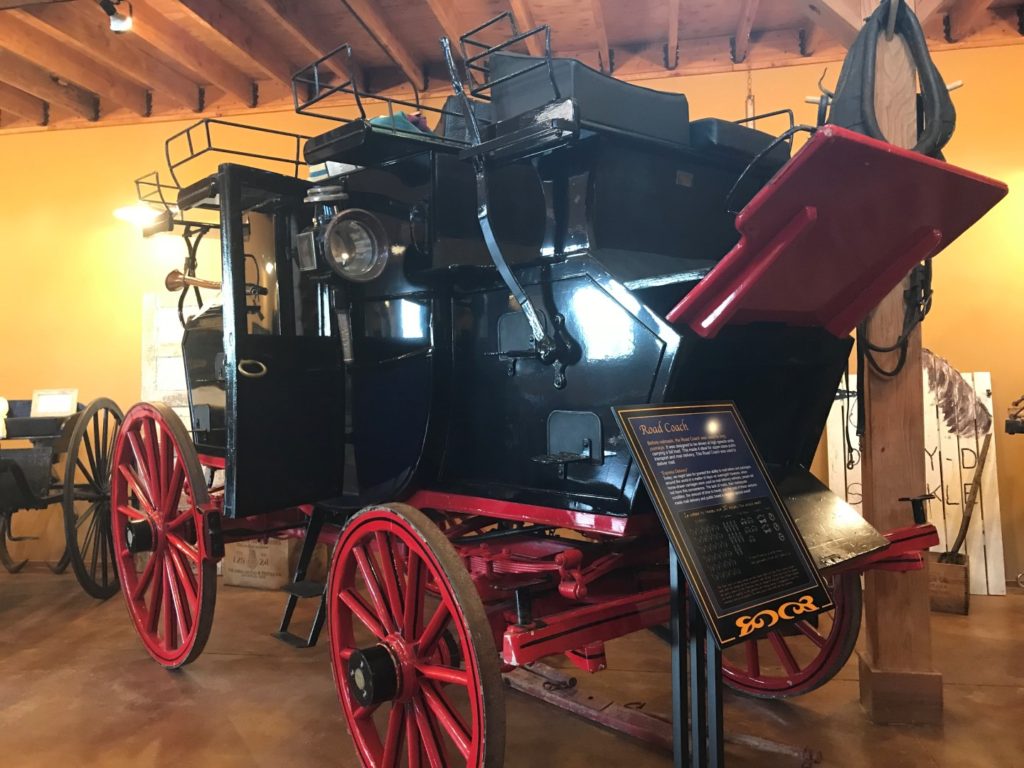 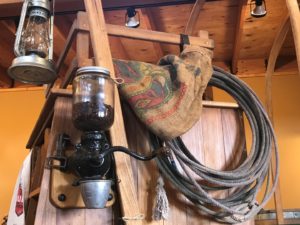 Apparently, it’s not just us modern coffee fiends who like our beans freshly ground

Chuckwagons were used from the 1860’s to the early 1900’s. They were used primarily on cattle drives. “Cookie” held the esteemed position of pretty much doing everything needed so that the men could concentrate on moving the cattle. He was cook, doctor, barber, tailor, and much more and had the most respected position on the cattle drives. His rig was decked out not just to cook meals, but also to carry bedrolls, and many other supplies. 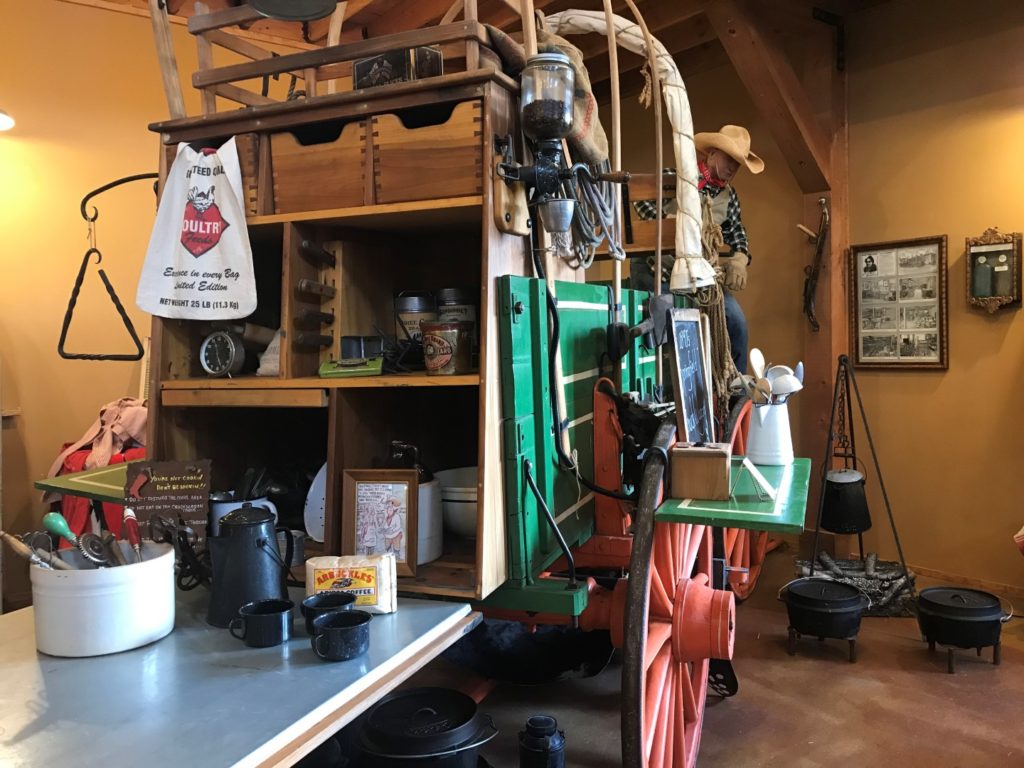 Teaching the Next Generation

The museum gets a lot of families, of course. The hands-on exhibits are great for kids to deepen their understanding of the time and how things worked. Kids can get the feel for sitting atop a carriage and holding the reins of a horse-drive buggy. they can dress in pioneer clothing, visit the period schoolroom and the blacksmith shop, and learn how wooden carriage wheels were made.

The gift store is a great place to pick up some local food products, books about the vehicles and the time period in the Pacific Northwest and local Pacific County. 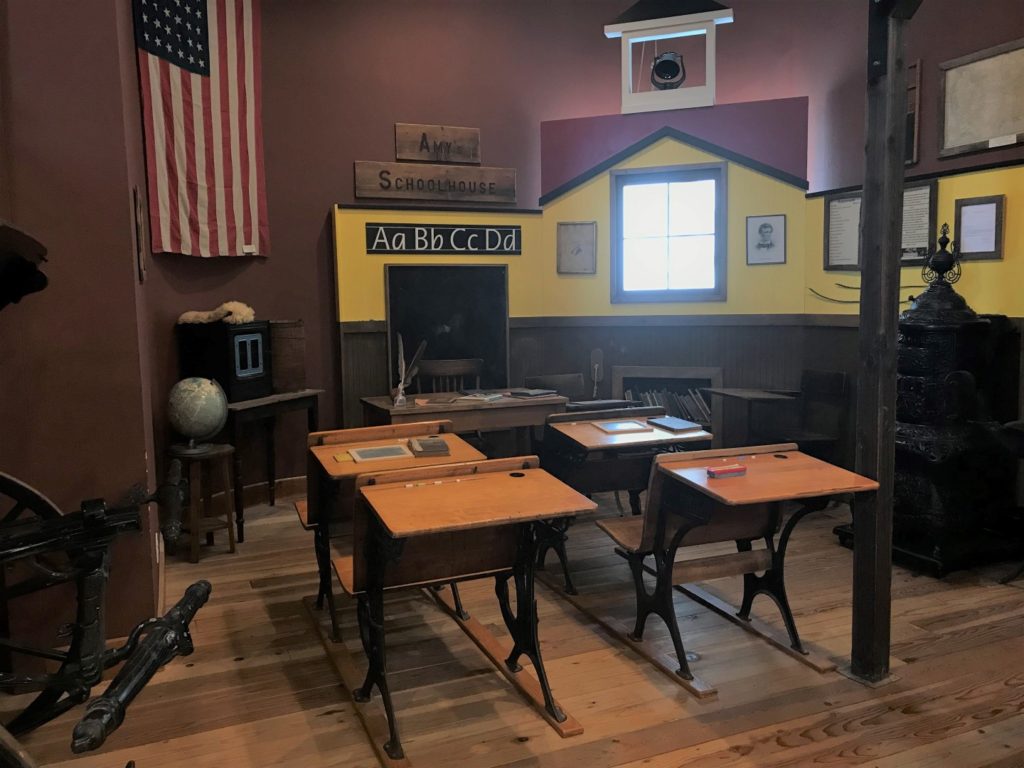 Plan a Visit to the Northwest Carriage Museum

A strong feeling of nostalgia came over me during my visit to the Northwest Carriage Museum. I knew I was calling up the oh-so-many historical museums I toured in my youth, and later with my own children.

The quality and diversity of the collection housed here is unique shouldn’t be missed. Plan a trip during a visit to the beautiful coastal area of north Pacific County, Long Beach Peninsula and the rest of southwest Washington. The museum is about a two hour drive from Seattle or three hours from Portland. 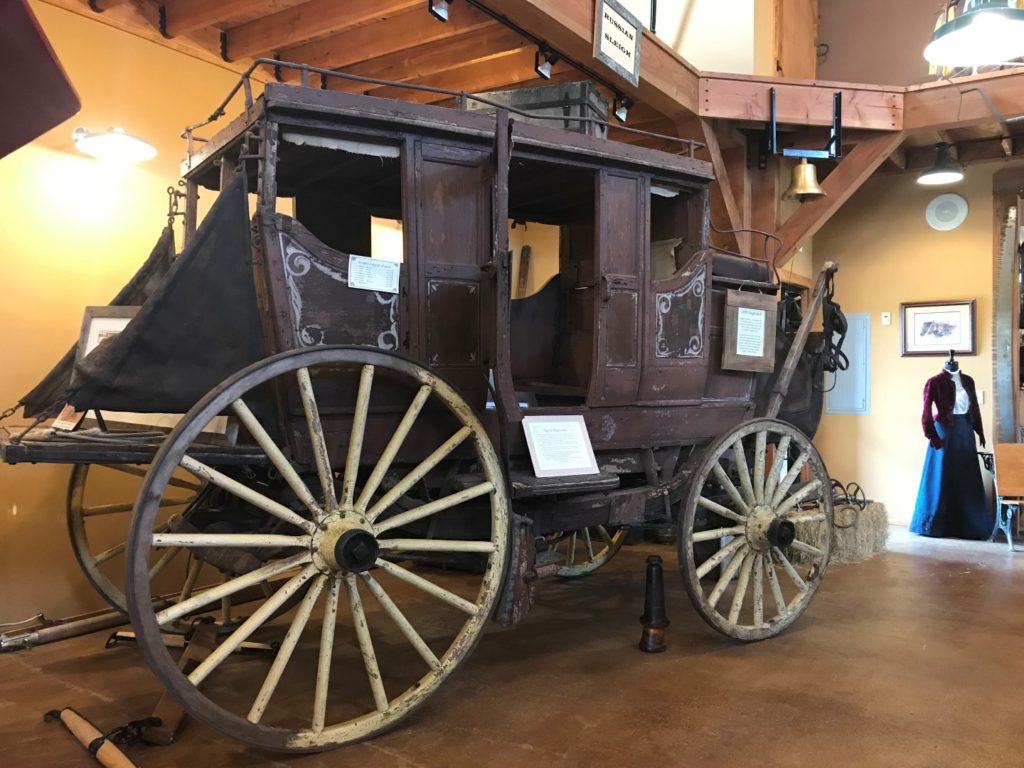 This stagecoach was driven by “Stagecoach Mary,” a fascinating historical figure and the subject of a documentary detailing the life of this freed slave. (Photo Nancy Zaffaro)

-All photos by Nancy Zaffaro. The cover photo depicts the carriage used in the 1939 movie version of The Little Princess with Shirley Temple. It still bears the studio inventory markings under the seat.

A Rock Concert Vacation: Road Trip like a Rock Star

Love these historic carriages. A big thank you to the Dennis family for preserving these beautiful examples of transportation history!

I agree, Janie. So glad you liked!

We are so appreciative of the Dennis Family for the original collection of vehicles! Proudly, we have continued to grow the collection from their 21 to 55, with more on the way! We love keeping history alive for future generations!
Thanks Nancy for a wonderful article!

Laurie, Agreed! Thanks for all of your work there as well. Your tour really brought the stories of these carriages and the time period to life. Just loved my visit and will continue to encourage others to visit.