Visit a Rum Distillery in the Amazon Rainforest 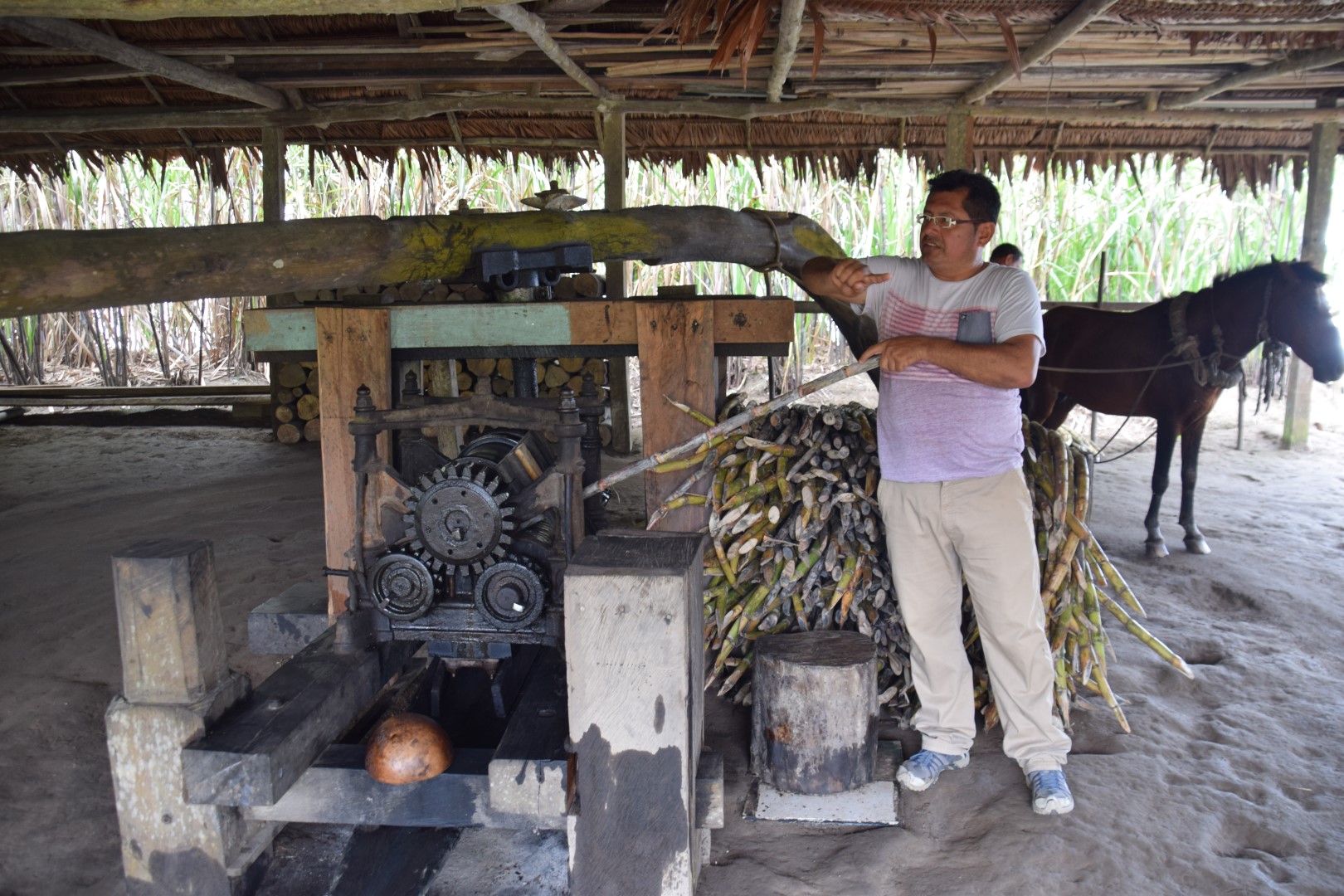 The ribereño, or hamlet, of Yanamono in the Peruvian state of Loreto, is accessible only by boat. There are no roads in this part of the rainforest. During our five days here on the Amazon and Napo rivers, we’ve been in and out of a variety of watercraft. We’ve gone out a number of times to see wildlife, taken some hikes, including a canopy walk, and visited a research facility, a botanical garden, a medical clinic, and a village home. We’ve spent time with a medicine man, had a chance to learn more about Yagua culture, and more. When we learn that our guide’s uncle has a rum distillery, we lobby a visit. So today, we’ll take a short boat ride to a family-owned farm to visit Don Guerra, a rum distillery in the Amazon rainforest. 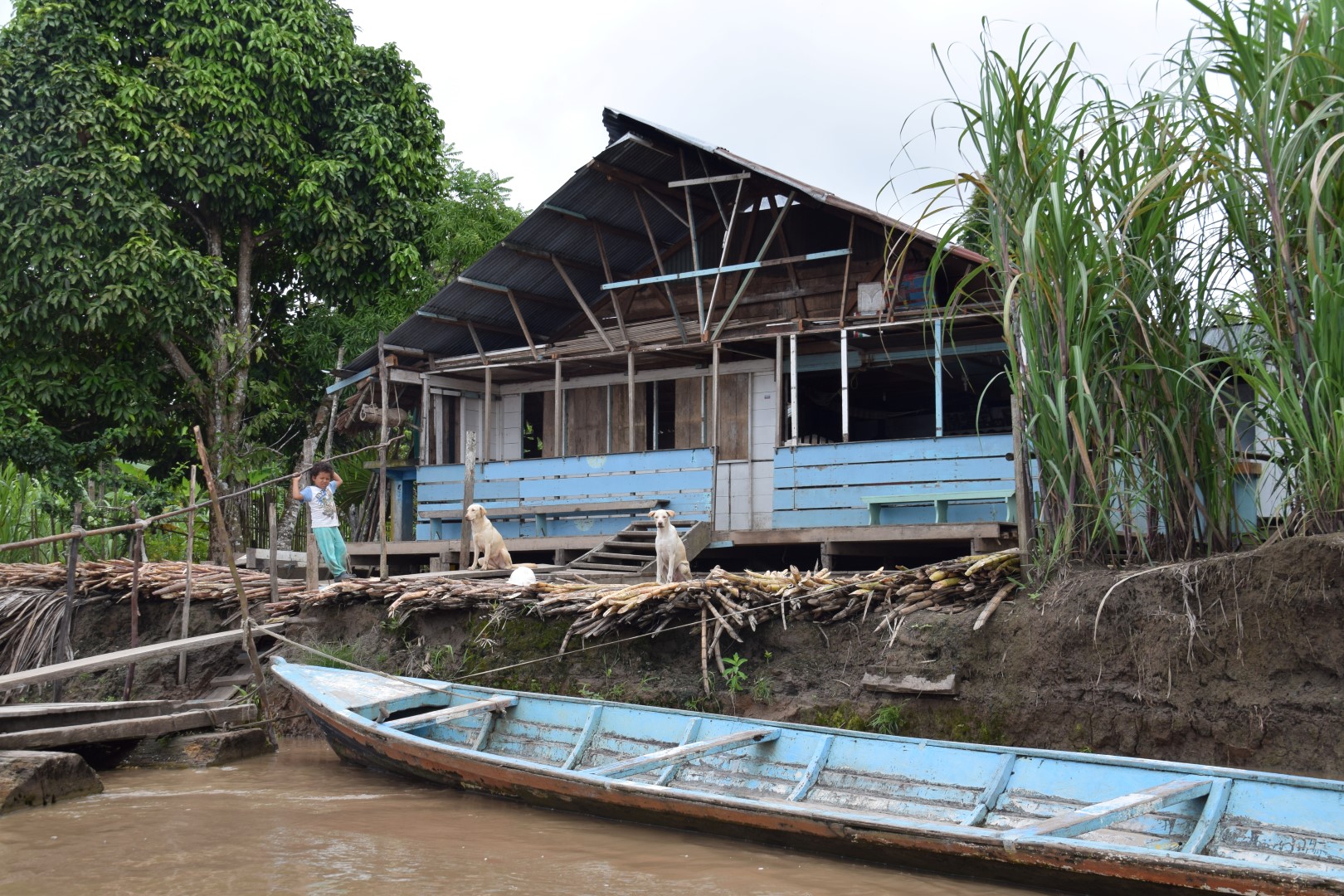 Don Guerra: A Rum Distillery in the Amazon Rainforest

“Be careful of your head when the horse passes,” our guide, Orlando, says as I take my place at the 100-plus-year-old trapiche press. I sit on the tree stump stool at the front of the press and check my head for clearance. I’m fine, so all I have to do now is watch that I don’t catch my fingers in the press when I push a cane through. 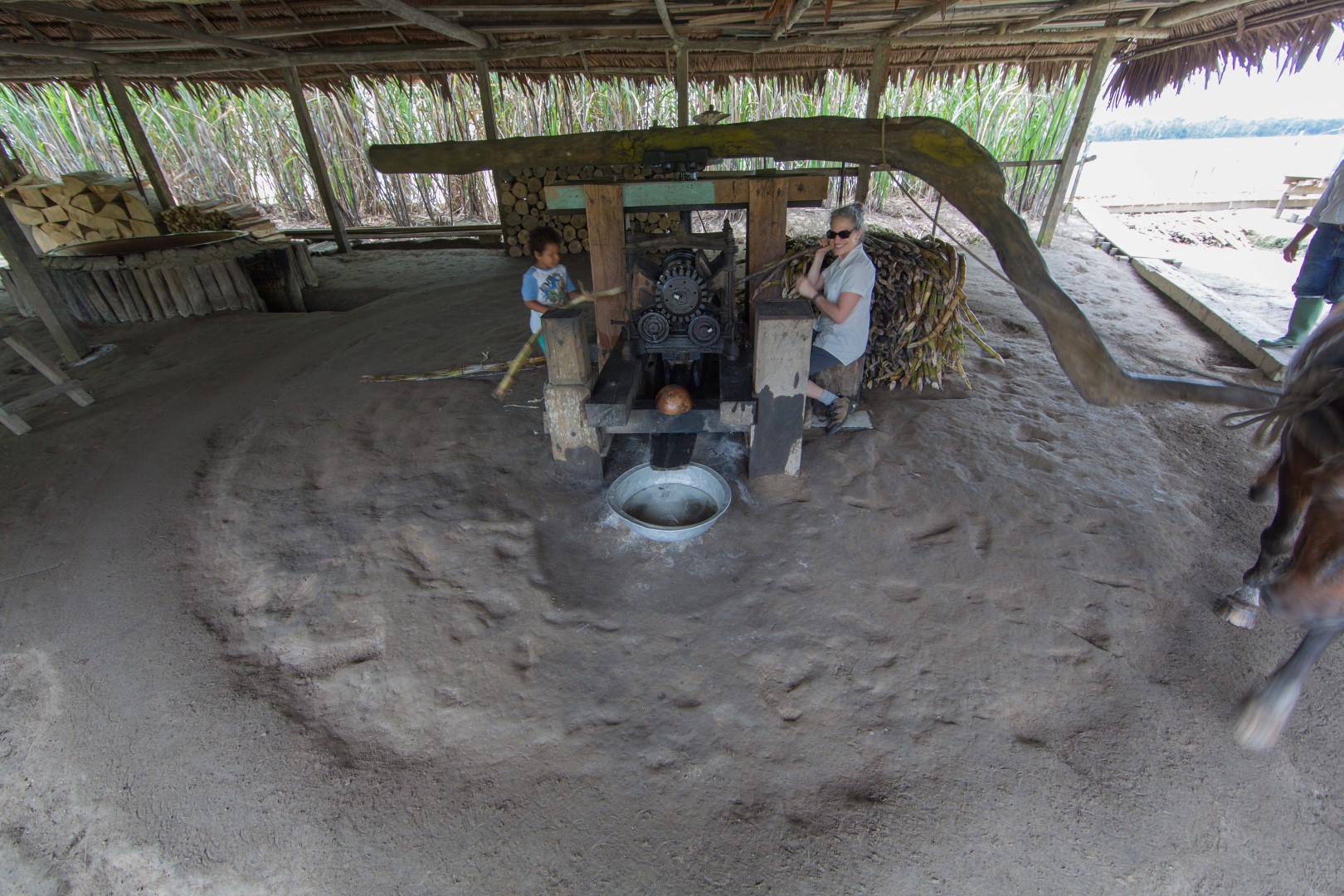 Doing my part to make rum in the Amazon rainforest

Third generation rum maker and owner of Don Guerra Distillery, Armando Guerra took over the business from his father. The press, we learn, was brought to Peru from England sometimes in the 1800’s and eventually made its way by boat to this spot.

Guerra pats his horse’s rump, and the horse begins his circular pass around me, the press, the stack of sugar canes, and Armando’s grandson who will pull the pressed cane from the press. 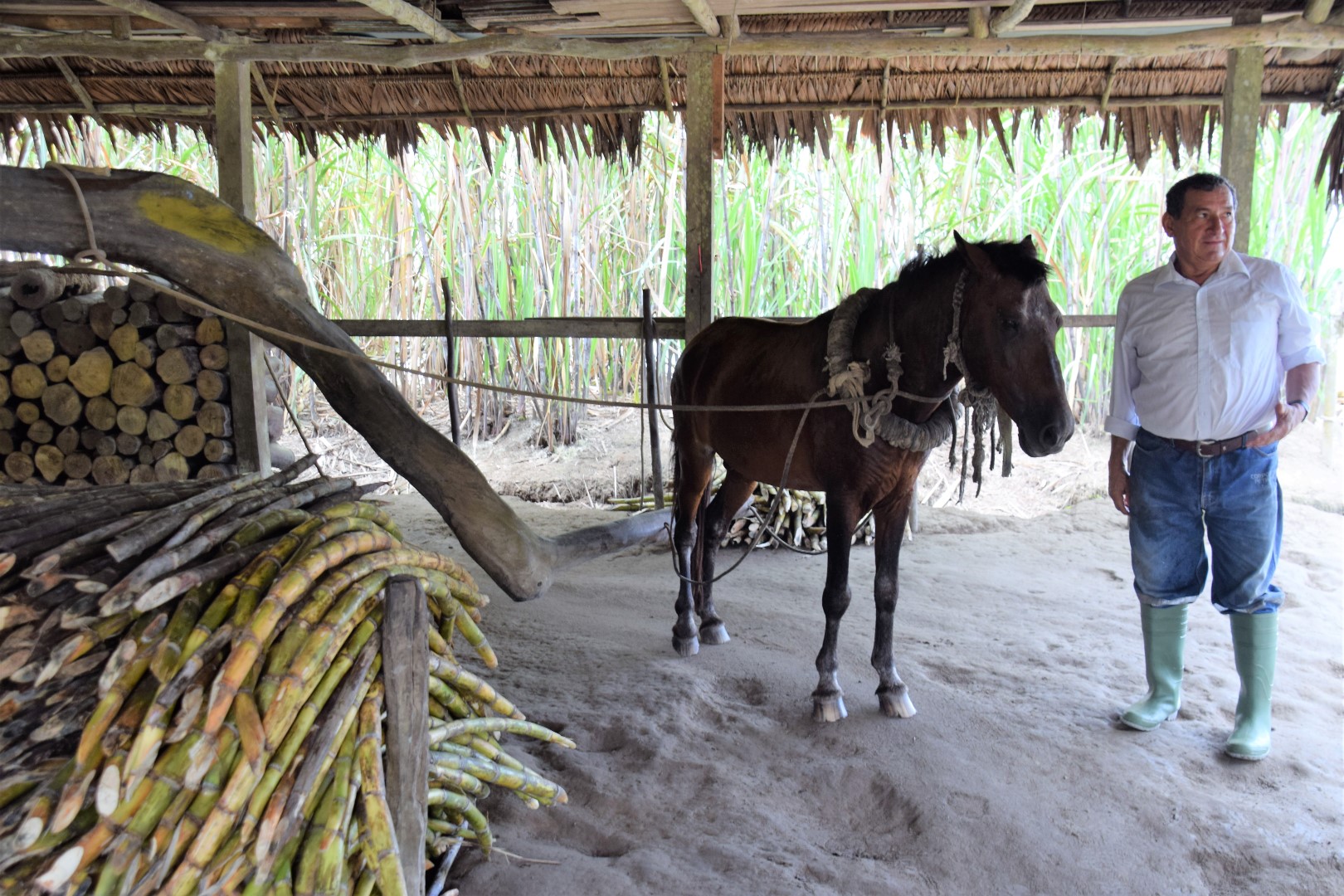 The horse walks the well-worn dirt path. I feed the stalk of sugar cane through the press. The rotating cogs grab and pull the cane through. Señor Guerra’s grandson nods shyly and stacks the pressed cane beside him. I continue feeding the mill press. On the ground, juice pours out from the press into an aluminum bowl.

I’m surprised by how much juice is extracted from each stalk of sugar cane. I establish a steady of rhythm of pulling a cane from the stack and feeding it overhead into the press, guiding it in hand over hand. I’m doing my small part to make rum at Don Guerra in Peru’s Amazon rainforest. 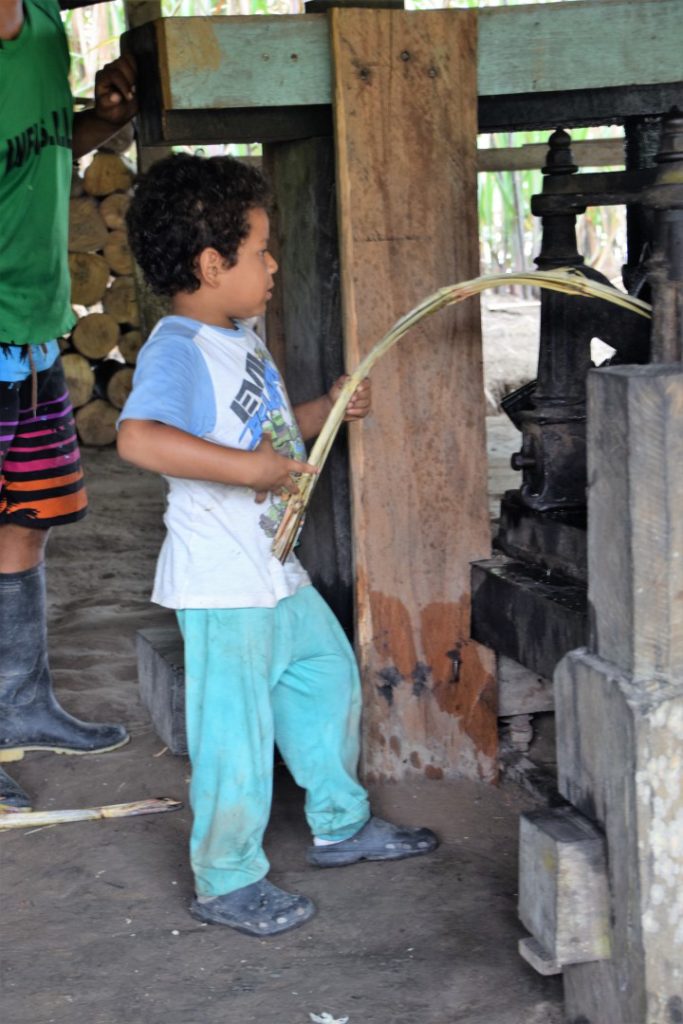 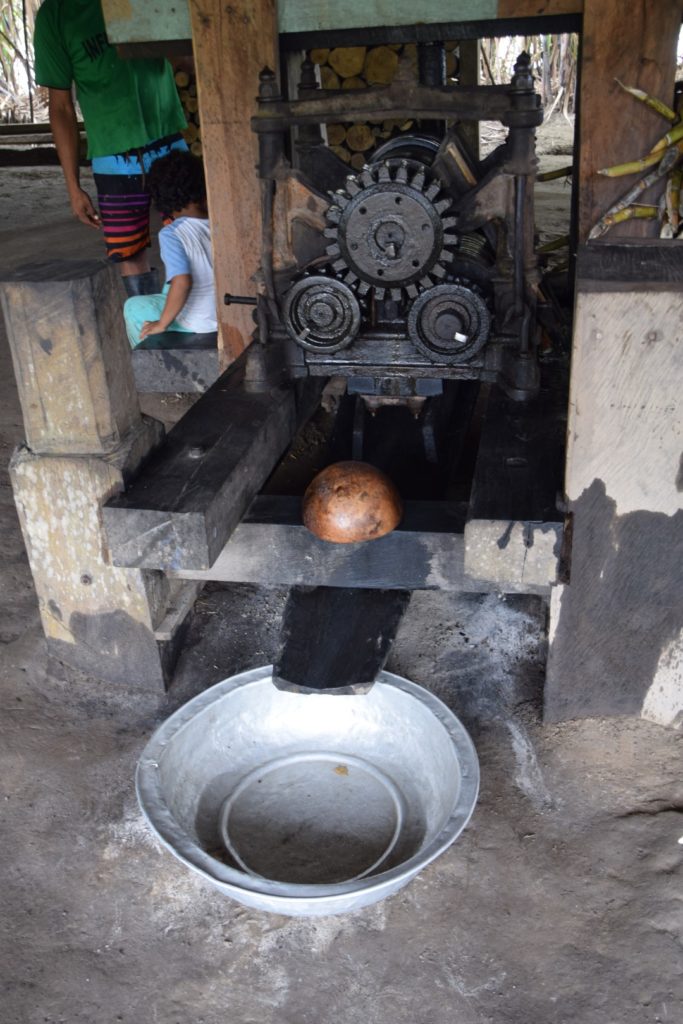 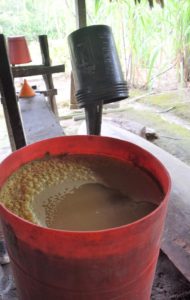 After a few of us have tried our hand at the task, we take a look at where the rum is made.

It will take two hours to press the amount of juice needed to make a barrel of rum. The juice goes through the paces of boiling, fermenting (for two days), and filtering before its set aside to age. 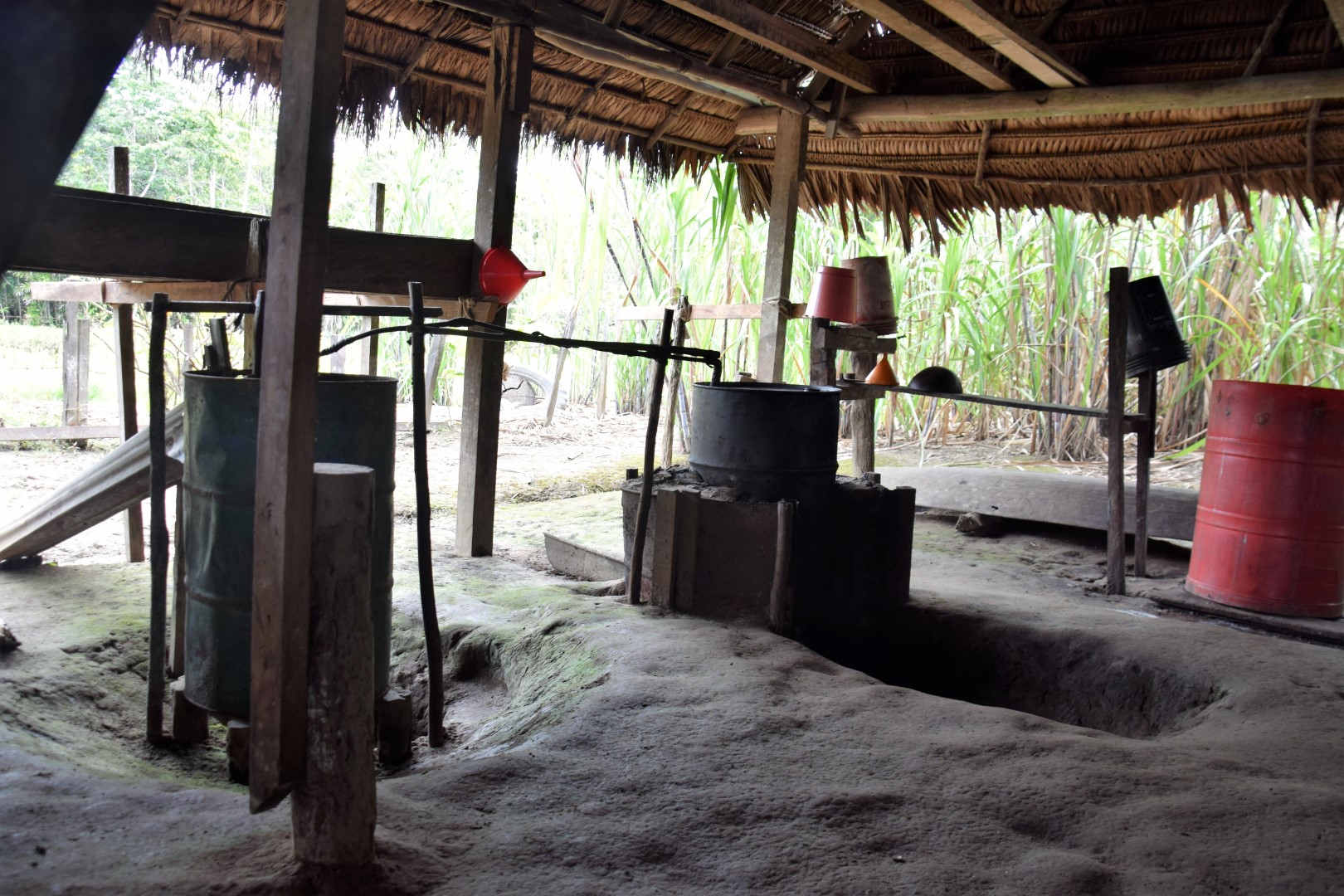 The distillery also makes sugar cane molasses, or melaza. The molasses is made by boiling down the juice in a large copper pan for 36 hours under an open flame. The juice is concentrated and the sugars crystallize. Molasses is still sugar, but a good molasses vitamins and minerals, such as iron, calcium, magnesium, vitamin B6, and selenium. It’s as good excuse as any to enjoy it. 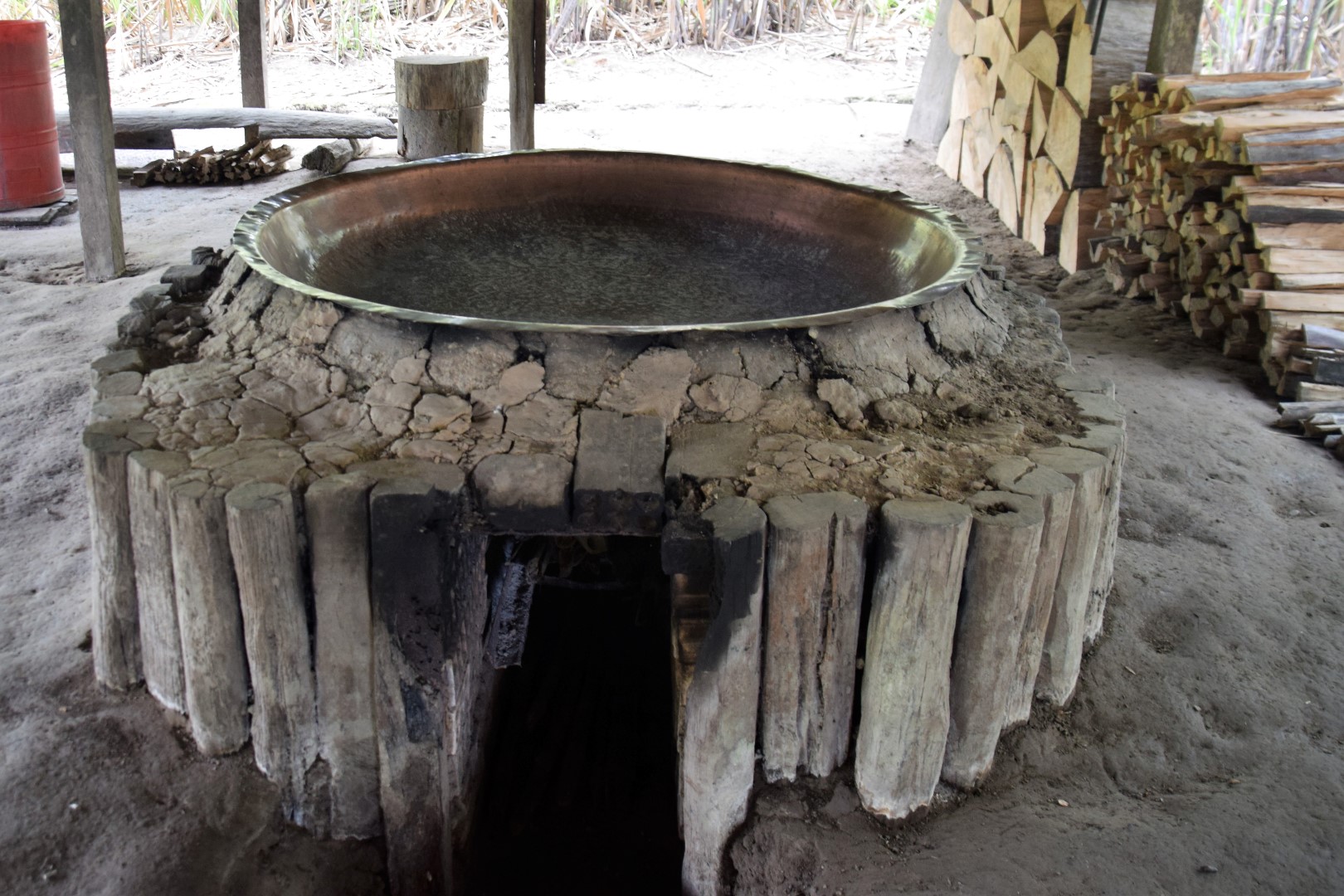 The sugar cane boils down in this copper pot, reducing to make make a rich, brown molasses 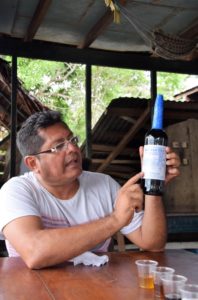 After touring where the spirits and molasses are made, our group of eight takes seats around a long wooden table to taste each of the four Don Guerra spirits and the molasses.

Our guide, Orlando Guerra, is Armando’s nephew, and he translates for us. The rum and molasses, he says, is bought directly by locals here at the distillery, and by various others who distributes it in Iquitos and other local areas.

Armando pours the first, his puro aguardiente. Aguardiente is basically a spirit or “firewater.” This is the fresh stuff, basically his day-old moonshine. It’s a bit harsh, but it’s also got a nice sweetness.

Melaza con aguardiente is a light molasses color, and it’s exactly what you think it would be: his aged rum with some added molasses. The rum has been aged some and it’s smoother, as well as sweeter.

The jenjibre con aguardiente is a favorite. It’s a mixto of rum, ginger and honey. It’s amber-colored and sweet and flavorful, with a very light taste. We all liked this one a lot. It’s great to sip a little on its own, but we agree it would be a great cocktail spirit. 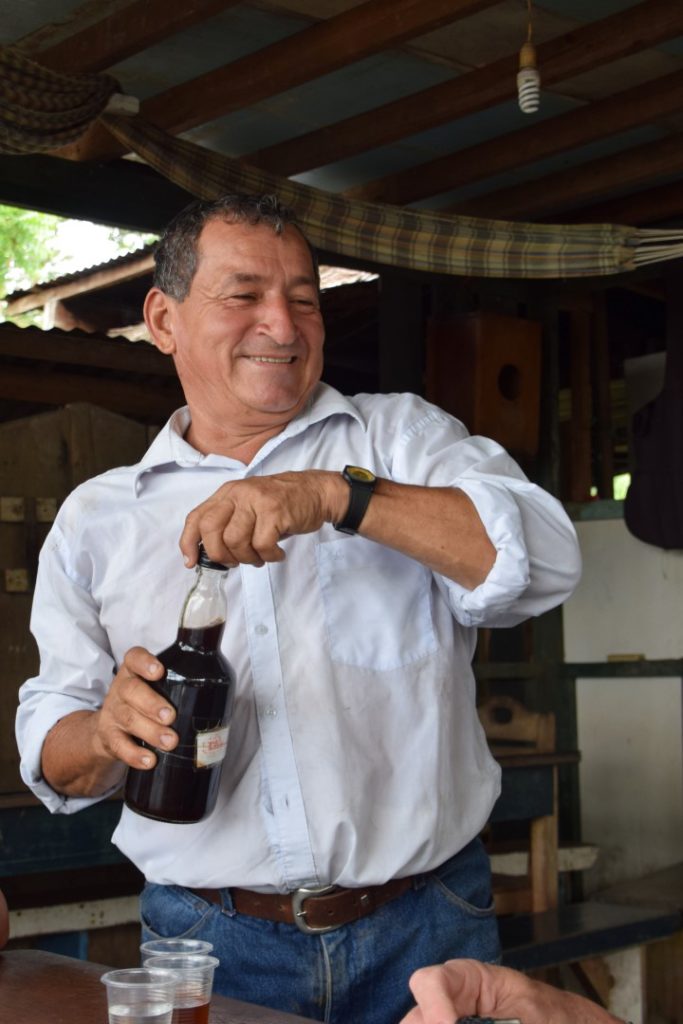 Armando Guerra enjoyed sharing his rum and telling his story

Time for the Hard Stuff

It’s time for the big guns. Siete Raices is Guerra’s Seven Root Rum. This is Guerra’s pride and the rum has been aged the longest. Siete Raices goes by a few nicknames. “Jungle Viagra.” “Underwear breaker.” “One sip, one baby.” Equitable warnings. We have a good time with this, but the rum itself is complex and tasty. It’s made by adding a tincture of seven different barks to the rum and finishing it with some of the corn syrup. The exact recipe is a family secret. Guerra shows us samples of each of the roots, which he says provide both medicinal and flavor benefits. 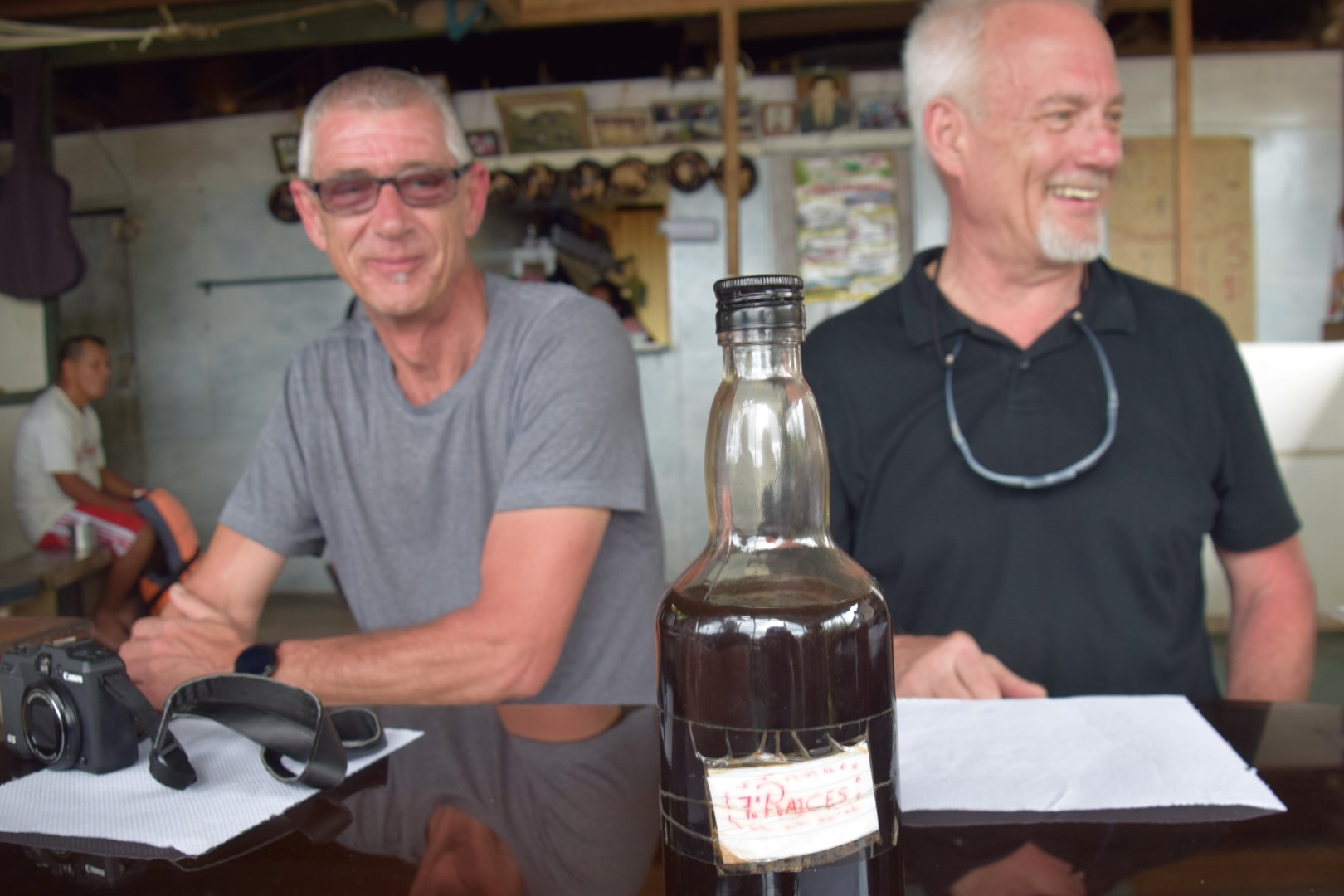 Are we having fun yet?

And yes, certainly, I took a bottle home with me. So far, it’s more of a novelty bottle in my liquor cabinet though. People like the story but I may need to stop sharing the nicknames—somehow, it scares off all but the most stalwart individuals. 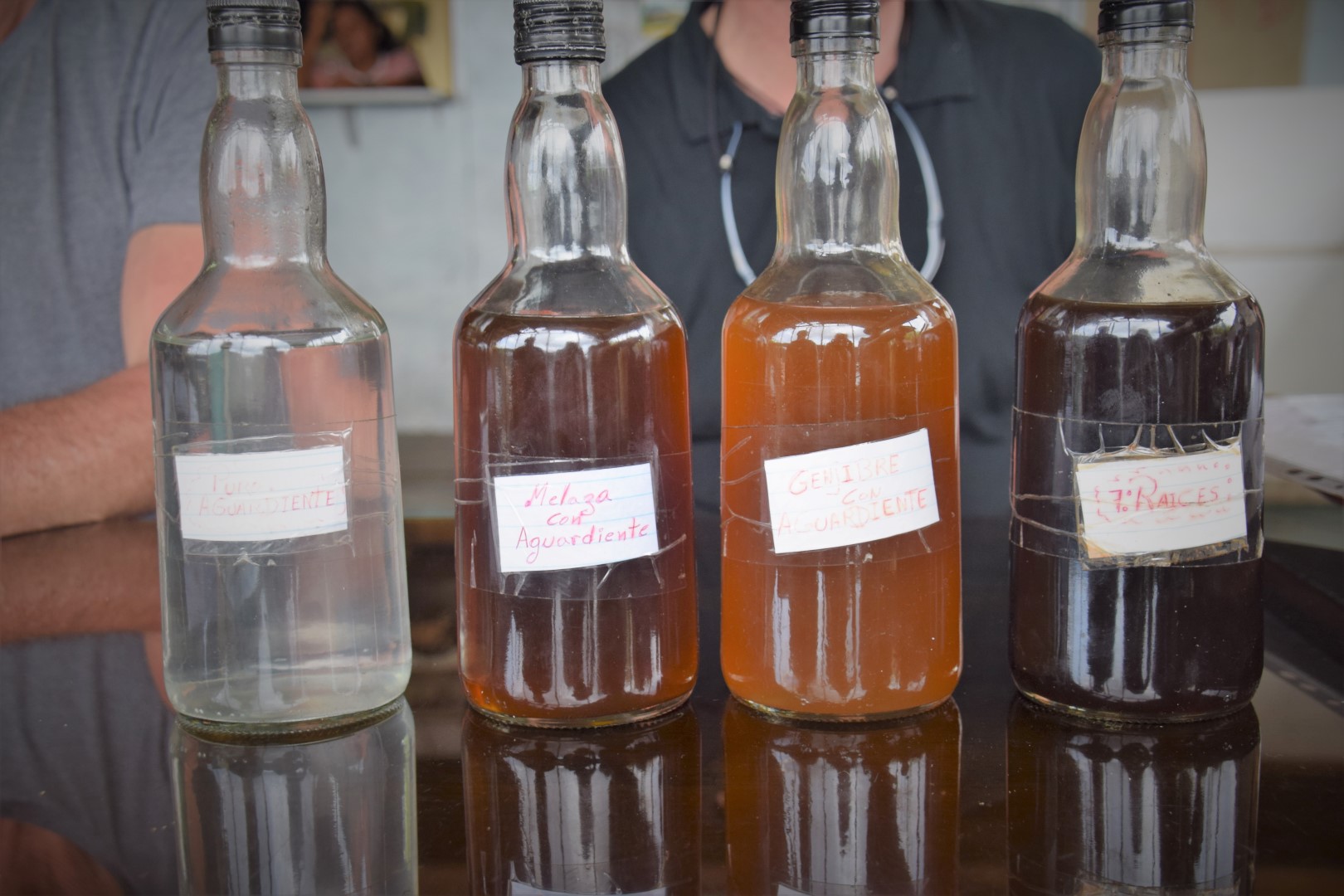 Our line-up of Don Guerra rums to sample

We end the tasting by trying the molasses, drizzling it on crackers. The molasses is truly delicious. I buy a bottle of this as well. (It’s especially good on ice cream and in a homemade switchel.)

Before getting back in the boat, we get a chance to see a bit of the farm. On 35-acres, the farm maintains some livestock and grows some fruits and vegetables. Sugar cane is the farm’s largest crop. We wave good-bye from the boat, happy to have had another small chance to see life in the Amazon rainforest. 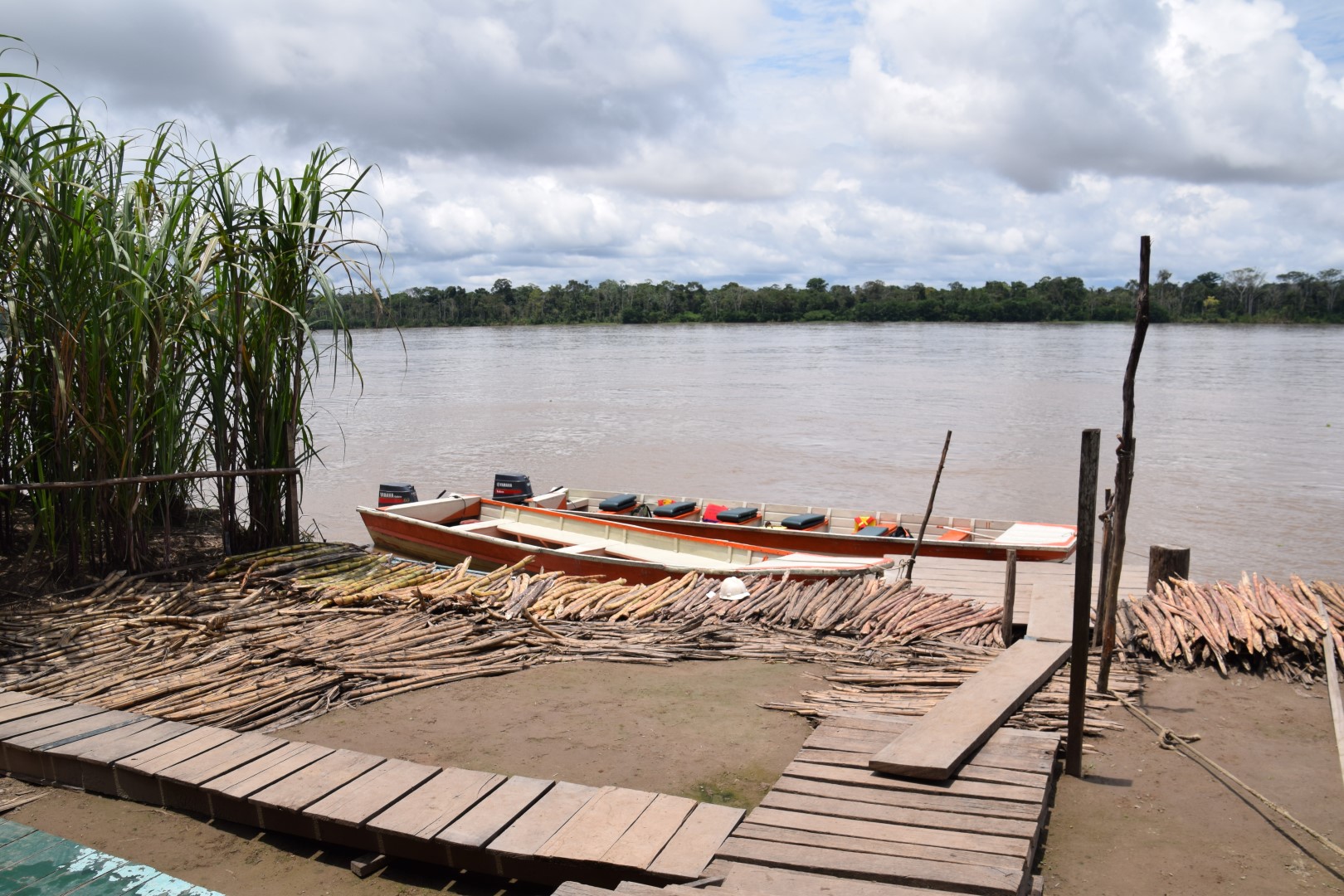 Back on the boat

-All photos by Nancy Zaffaro, except as credited.