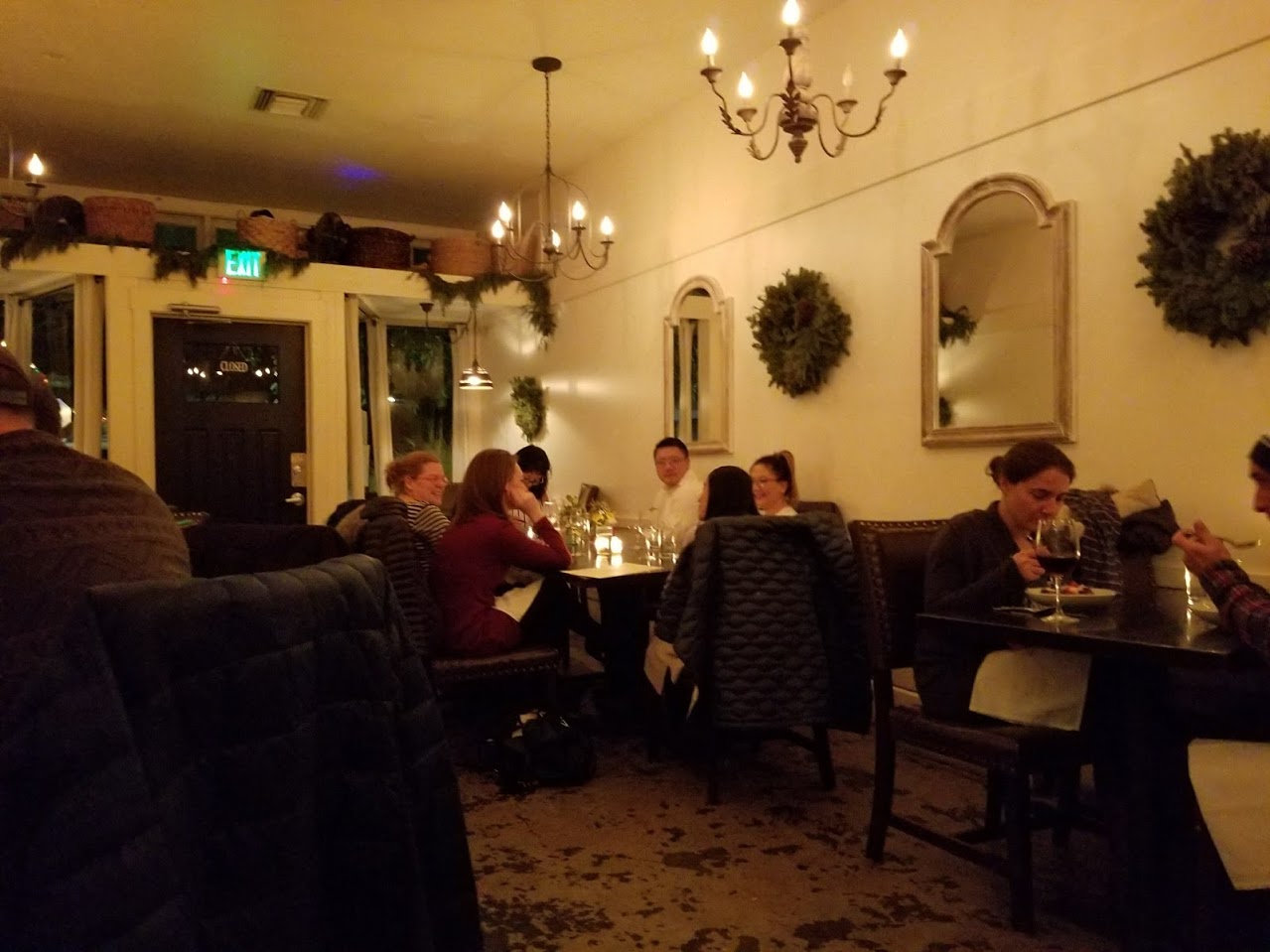 Verdigris is, at its core, a passion project. In fact, it’s not unlike many quaint French bistros found on the small side streets of Paris. And that is exactly the kind of restaurant that owner and chef Johnny Nunn wanted to run. I visited, just as Verdigris turns three year old. 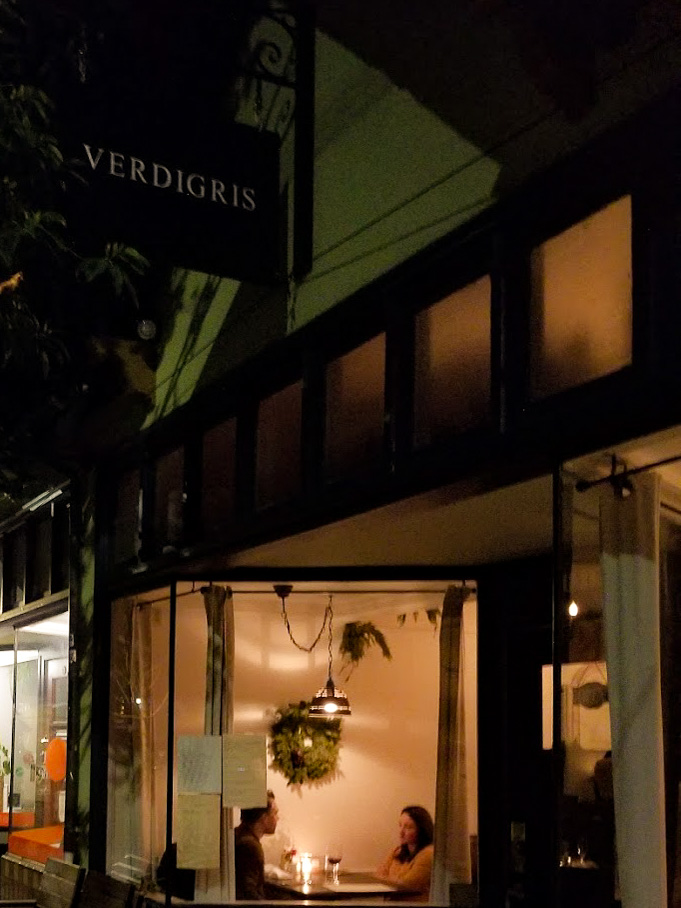 Verdigris is warm and inviting

Previously the chef at Brasserie Montmartre, he grew up in the fine dining industry. With a resume that includes places like Farallon and Eleven Madison Park, he’s no slouch in the kitchen. However, he found the high-end scene a bit impersonal. Speaking about his space at 1315 NE Fremont, in Portland, Oregon, he says, “I love that if it snows here, I can walk just walk down the hill and cook for the seventeen people who happen to show up. It’s just that kind of neighborhood.”

And, it turns out, living in the neighborhood is exactly how he and his wife found their ideal location. After passing the place day in and day out, they jumped at the chance when the space became available, putting everything else on hold. “I love that it’s small, and I love that we have regulars…and I love surprising people with the quality of the food coming out of such a small kitchen.”

And he’s not exaggerating. With roughly nine hundred square feet to work with, the team has done an excellent job turning the tight space into a warm and inviting dining environment for thirty-six people. A smart layout ensures ease of passage for the waitstaff down the center and offers customers the ability to peek at what’s going on in the kitchen at any given time.

Excellent food comes out of the surprisingly small kitchen at Verdigris

The beverage list consists of a single front and back page, with a well-curated selection of cocktails and wine. The food menu is contemporary French, and changes depending on what’s fresh. But even though it’s seasonal, expect to find at least a few of the classics represented.

When dining there in December, hearty and rich would have been a perfect description of the dishes listed. A fluffy duck and chicken liver mousse arrived first, served alongside crostini, mustard, and tangy homemade quick pickles. 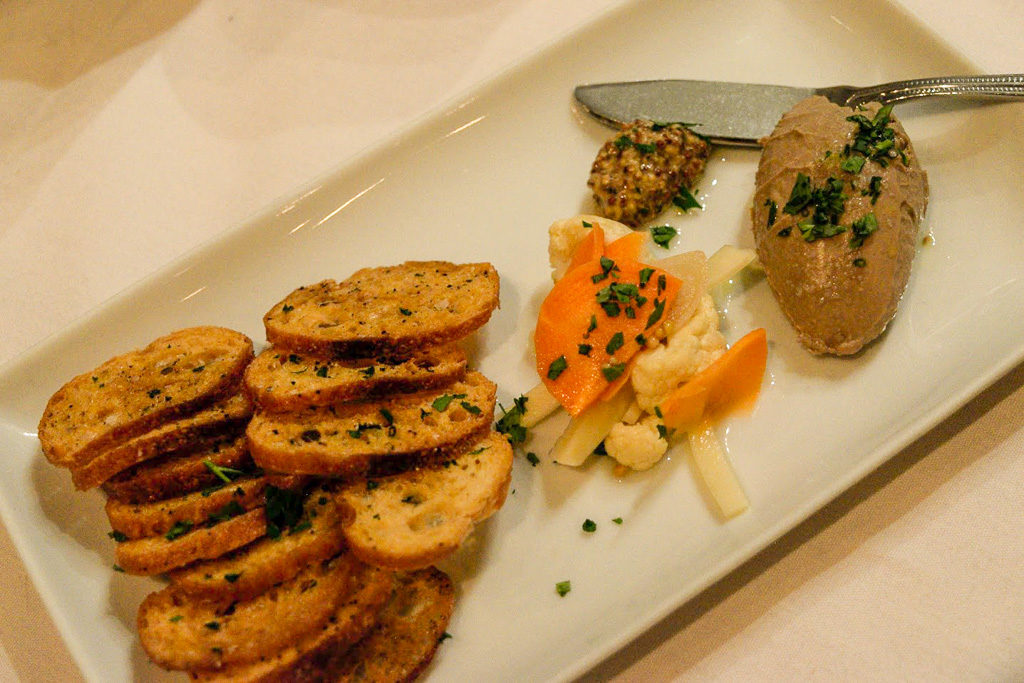 Starting with a duck and chicken liver mousse

That was followed by a rich, creamy cauliflower and fennel soup, with a thick-mouth feel, topped with herb oil and bits of smoked salmon. 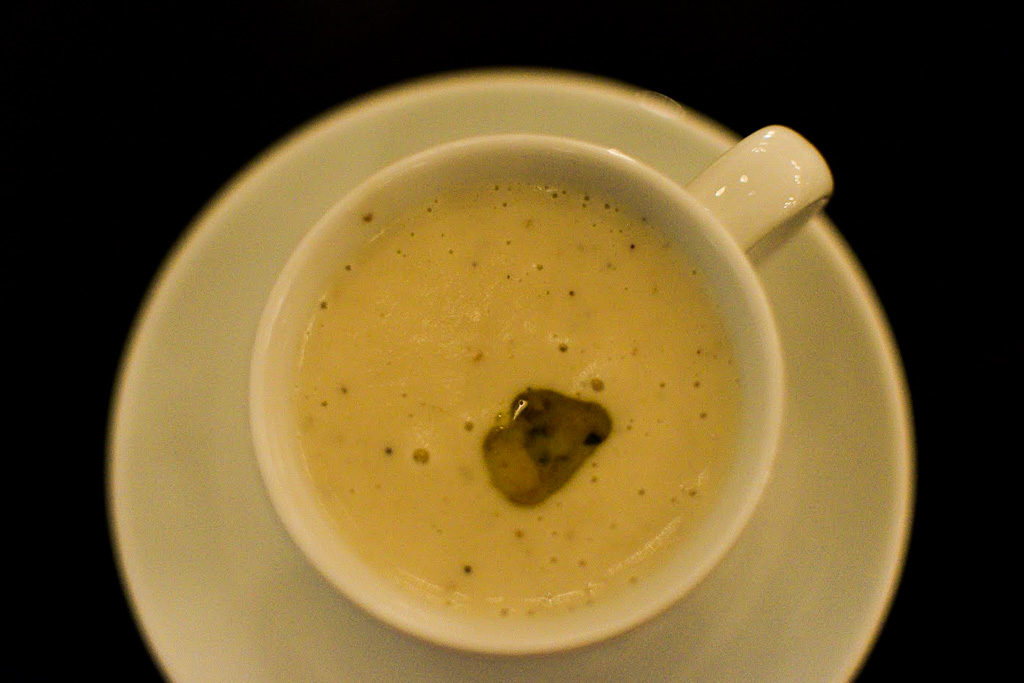 The traditional cassoulet received a modern update with the addition of a 60-minute egg (an egg sous vide for a full 60 minutes until the white is set, and the yolk is thickened, but still runny). And the beef bourguignon was texturally beautiful, with the soft beef, crispy bacon, creamy potatoes, and toothy root vegetables all playing off each other nicely. Included in the stew was kohlrabi; an exciting and tasty addition to the traditional French dish. 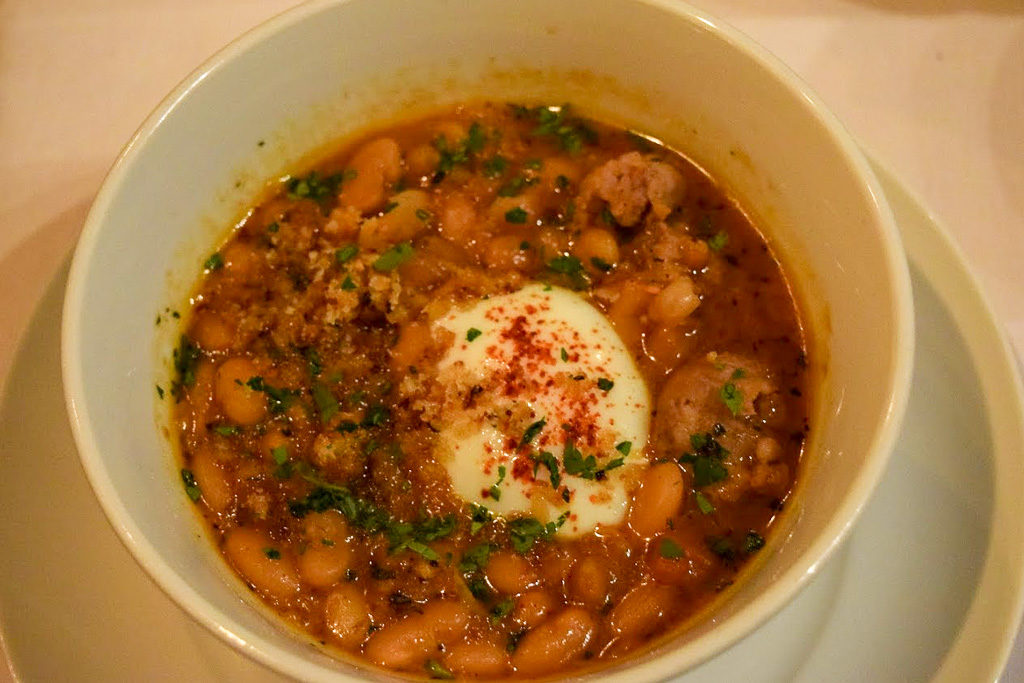 A traditional cassoulet, served with an egg sous vide 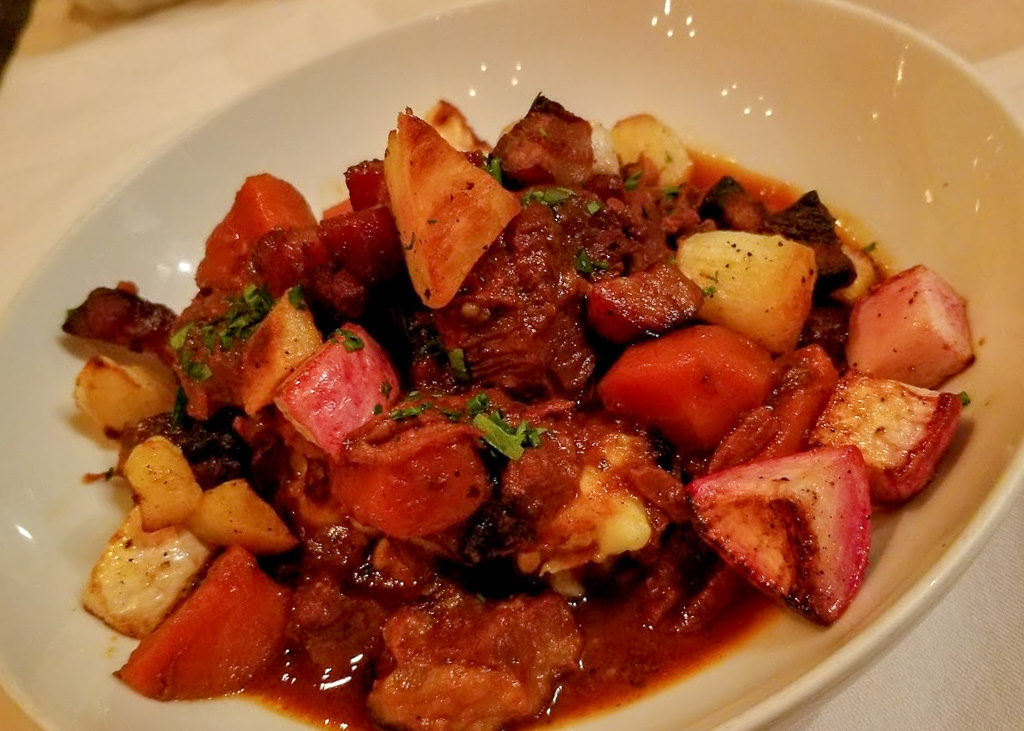 Beef bourguignon: texturally beautiful and both traditional and with a modern twist

Capping off the meal was a menu staple: warm espresso chocolate cake with coffee ice cream. While not molten, it was still warm and decadent, and nary a crumb survived the encounter with our table. 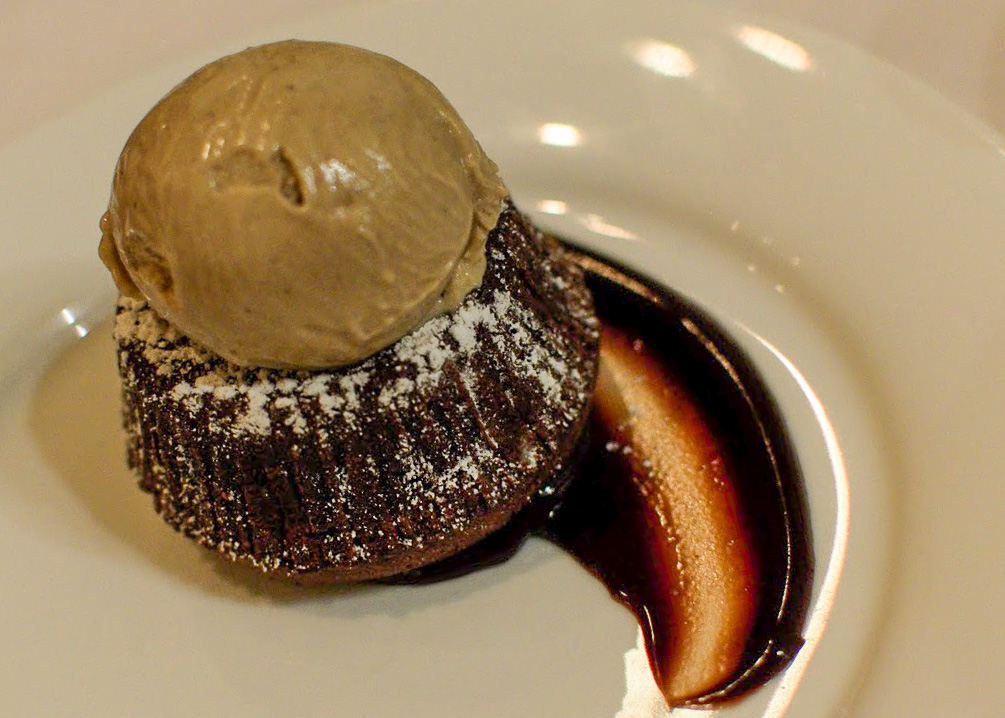 When asked to describe his cooking style, Johnny demurred a bit, “We’re un-Portlandy in the sense that we’re more friendly than technical.” And that’s a refreshing attitude change in a self-described “foodie” town like Portland.

So, if you find yourself in the Fremont neighborhood, do yourself a favor. Stop in and enjoy a delicious, homey, French-inspired meal. And enjoy the atmosphere and camaraderie resulting from the passion Johnny and his team bring to work every day. 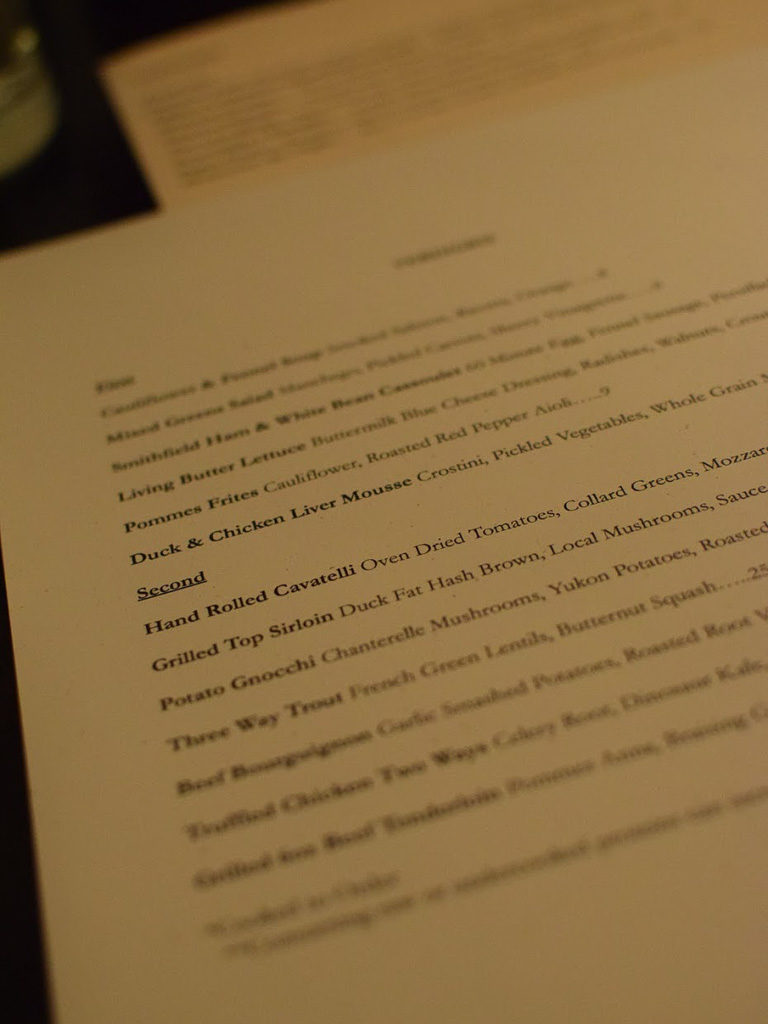 Visit a Rum Distillery in the Amazon Rainforest

Nice article/ Makes me hungry. Wish it was around my corner.