Stroopwafels to Bitterballen: 10 Dutch Treats to Try in Amsterdam 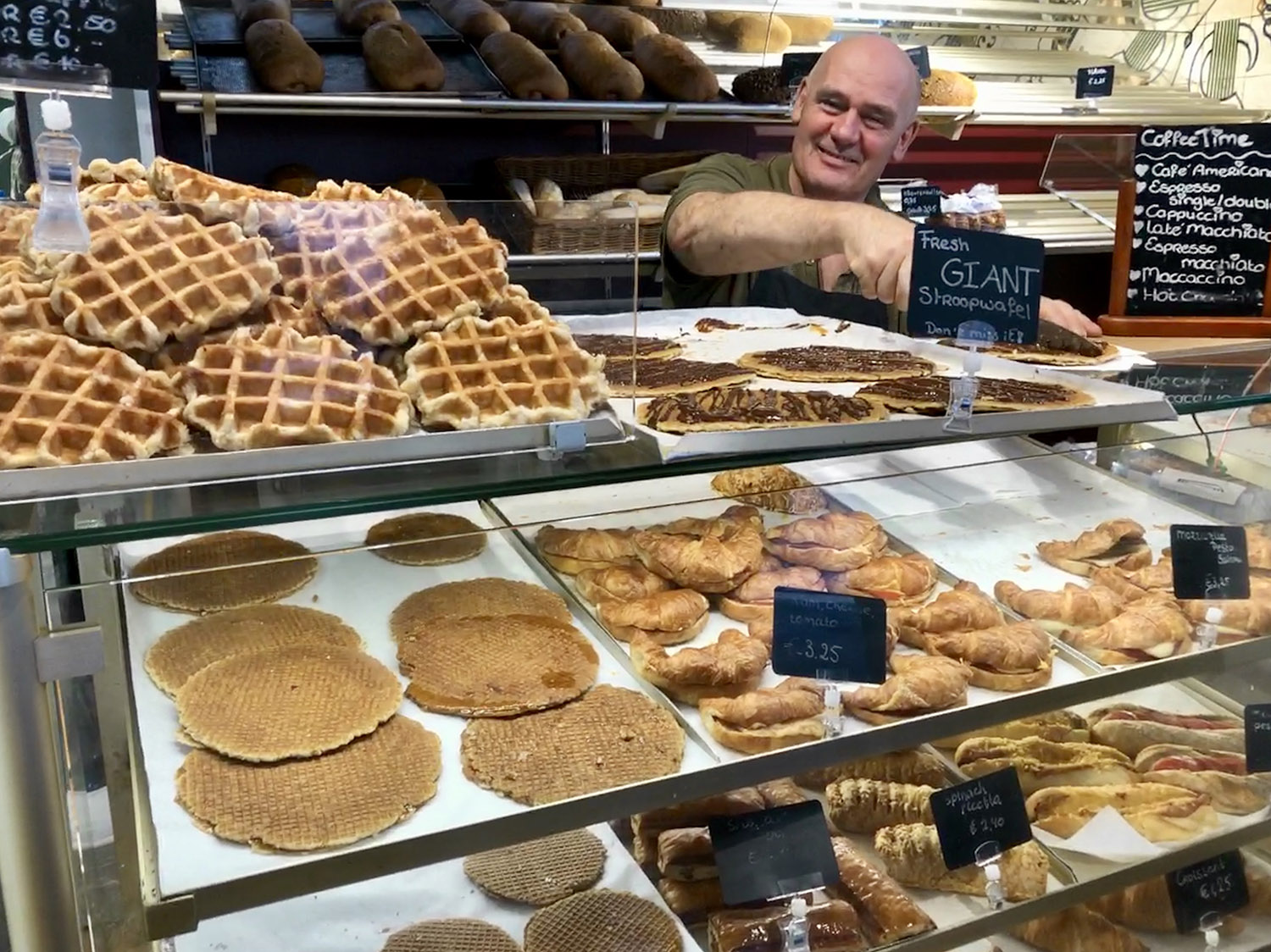 Tasting my way through local food specialties is one of my favorite ways to experience a new destination.  Learning about the history, culture, and fascinating stories behind the food is one of the joys of travel.  All I knew of Dutch food before I arrived in Amsterdam was cheese and beer, and I happily learned that there are so many more Dutch treats to sample. If you are traveling to the Netherlands, do not return home without trying these traditional tasty delicacies. 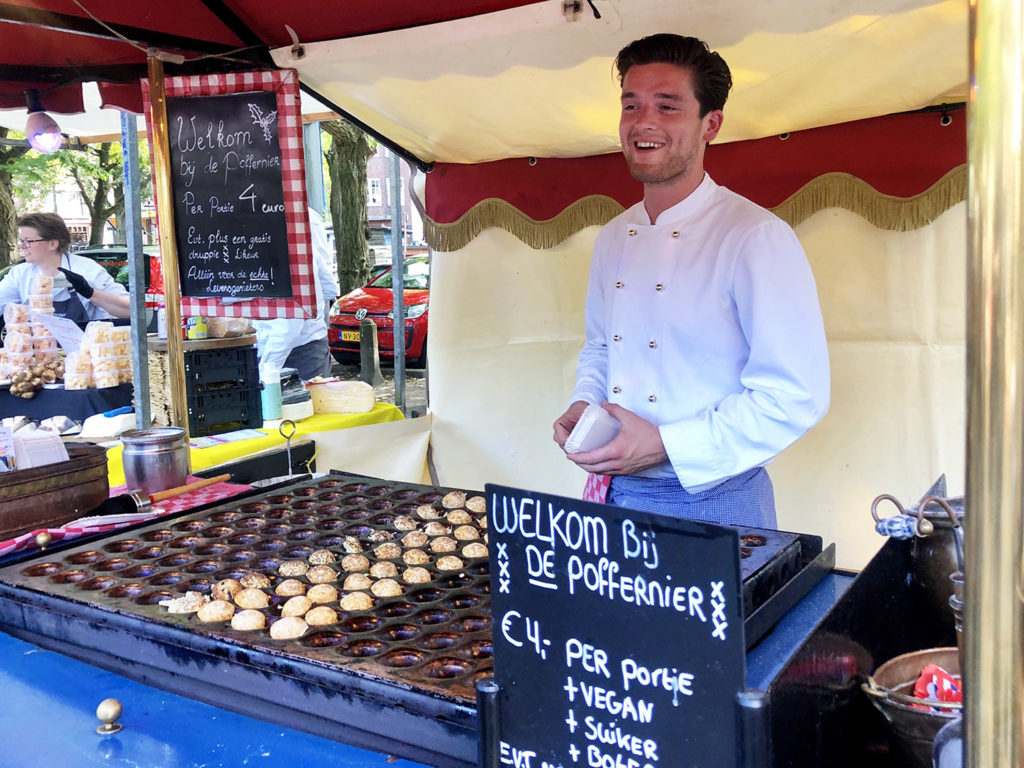 Nothing beats a bag of hot, buttery poffertjes from a street market vendor (Photo Sharon Kurtz)

Stroopwafel is a delicious Dutch cookie created by first baking pastry dough in a special wafel iron. Once the “wafel” is removed, it is sliced horizontally while it is still warm and stuck together with special sweet and sticky caramel syrup (the “stroop”) in between. If you are in the mood for something really decadent, get them with chocolate drizzled over the top.  The dough is made from butter, flour, yeast, milk, brown sugar and eggs.  The stroopwafel originates from Gouda, a small city south of Amsterdam.  The stroopwafel was first made during the 18th century by a baker using leftovers from the bakery and sweetening it with syrup.

I had the most delicious stroopwafel at Bakkerij Egstorf in the Canal district.  The baker, Mr. Hans Egstorf, started as an apprentice when he was 13 years old, and is still baking 50 years later.  The wafels come two sizes, small or giant, as big as your face.  Of course, I chose the giant.  The charming Mr. Egstorf prepared a “to go” box for me with the remainder of my giant stroopwafel along with several other delectable Dutch cookies tucked inside, perfect for my next day breakfast.  What a sweet man he was. 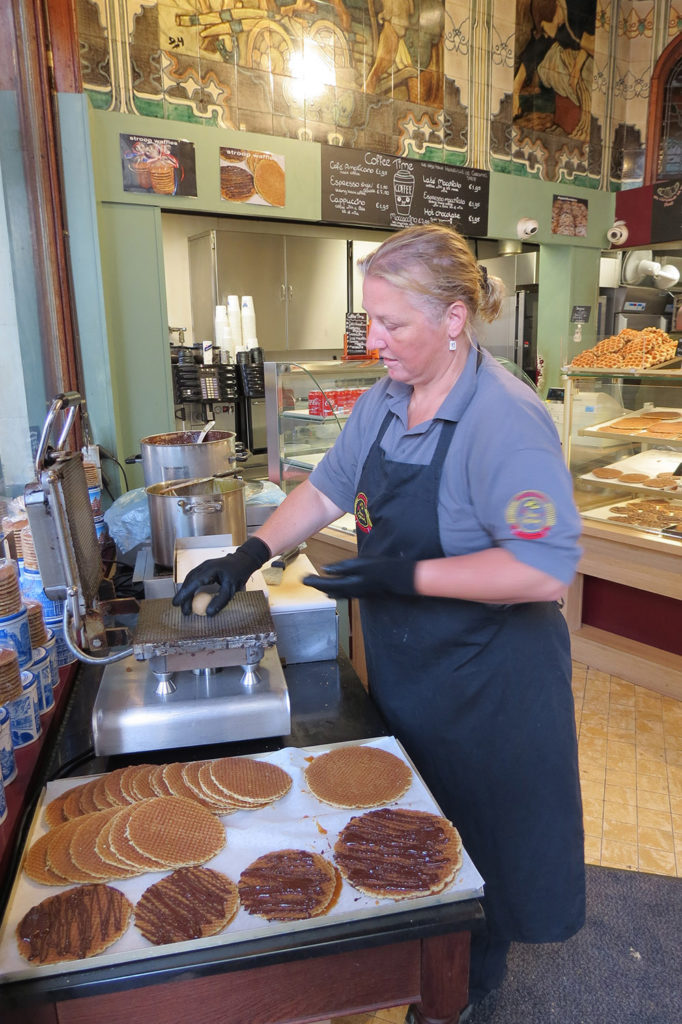 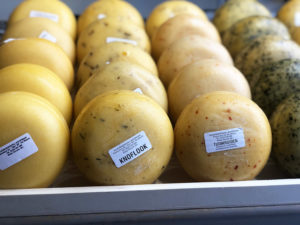 The Dutch have been making cheese, or kaas, since 800 B.C., and The Netherlands is the largest cheese exporter in the world. The majority of Dutch cheeses are semi-hard or hard cheeses.  One of the best-known cheeses is Gouda, a yellow cheese made of cow’s milk that is aged anywhere from about 4 weeks to over a year. Gouda has been produced in the Netherlands since the 12th Century and is one of the world’s oldest surviving types of cheeses. 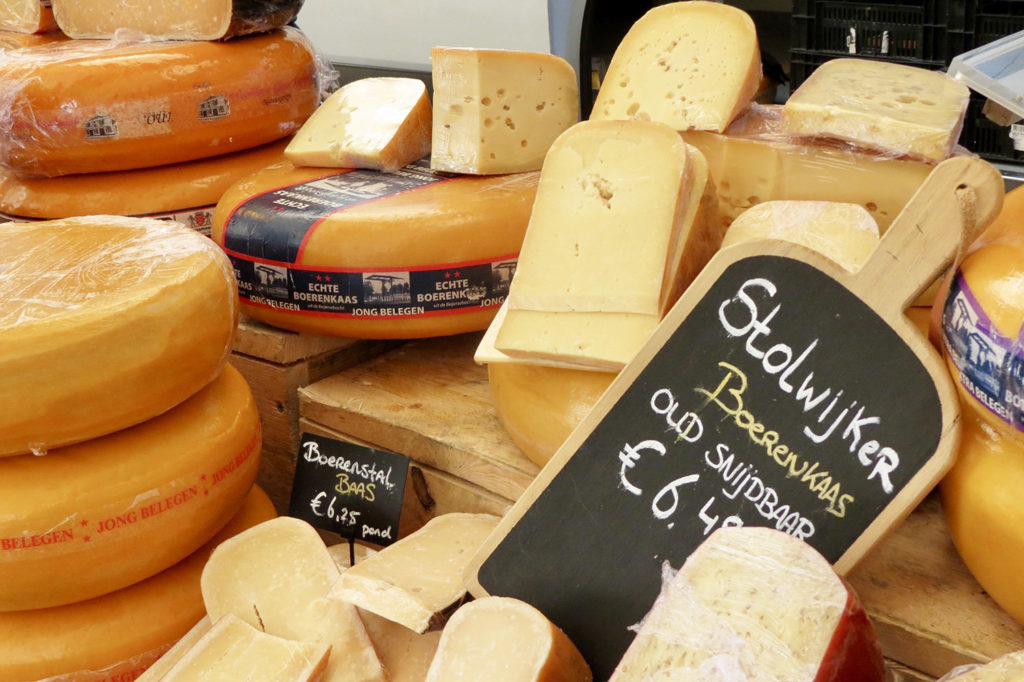 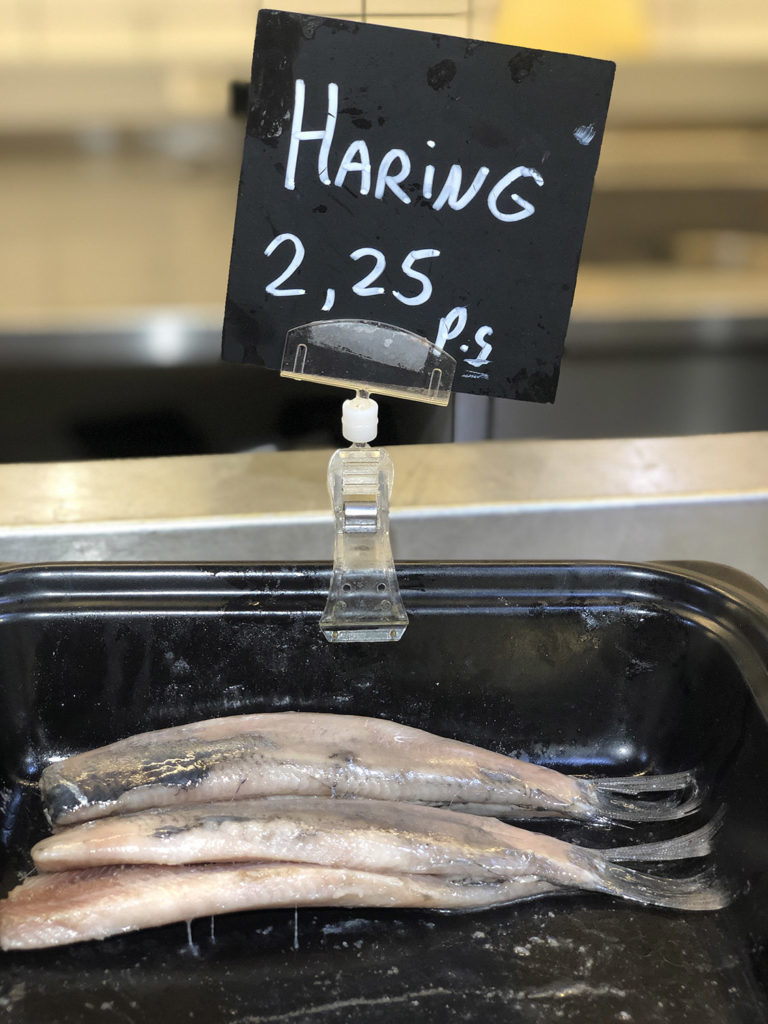 Haring ‘Hollandse Nieuwe’, or Dutch new herring, is probably the most famous Dutch food. If you like fish – every visitor to Amsterdam should give it a go. This lightly brined raw herring is usually served with chopped onions and pickles. Herring can only be called “Hollandse Nieuwe” if the fish is caught between May and July. It is a special preparation and must be done according to the Dutch tradition.  The herring is cleaned, the head is removed, and it is preserved in a special way with salt.

I was reluctant to try the herring, and I almost certainly wouldn’t have if it hadn’t been included in the All Dutch Food, Walking and Canal tour I participated in. With encouragement from my fellow foodies, I’m glad I tried it.   I was surprised by how good it tasted, light and fresh – not strong and fishy as I imagined it would be. 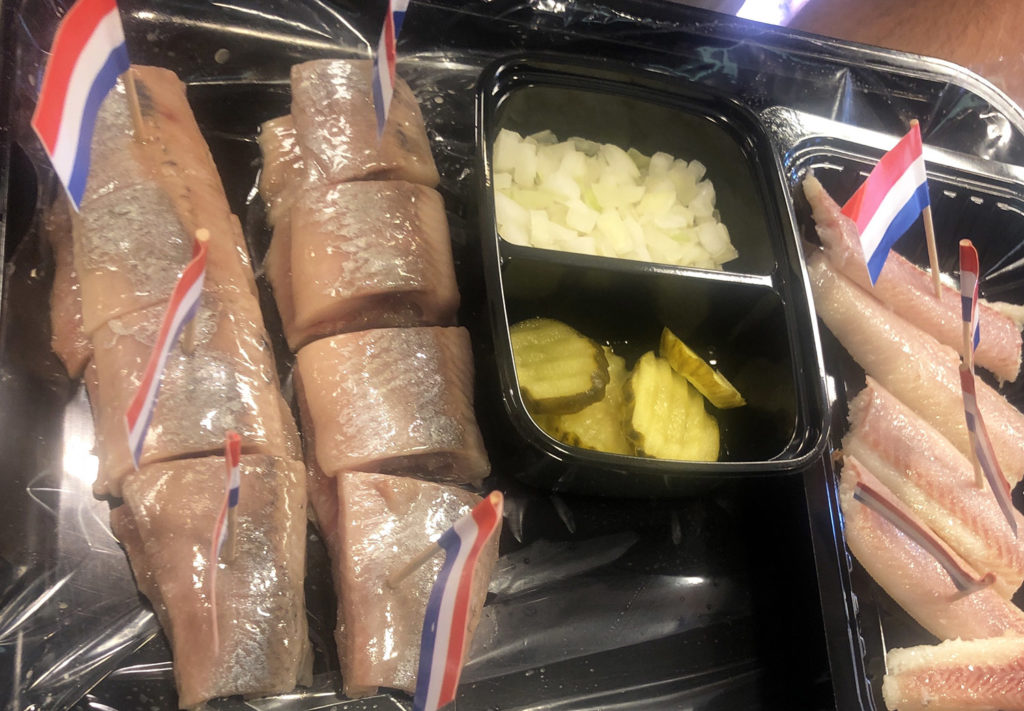 If you’re not feeling quite brave enough to try raw herring, then you can still get your “fish-fix” from kibbeling – battered and deep-fried morsels of cod, the ultimate Dutch comfort food.   They are usually served fresh out of the fryer with a mayonnaise-based tartar sauce and lemon. As part of the food and canal tour I tried raw herring, kibbling and smoked eel at a fish shop in the 17th century Jordaan neighborhood from a family that opened their first shop in 1880. All three were delicious, be brave … try them! 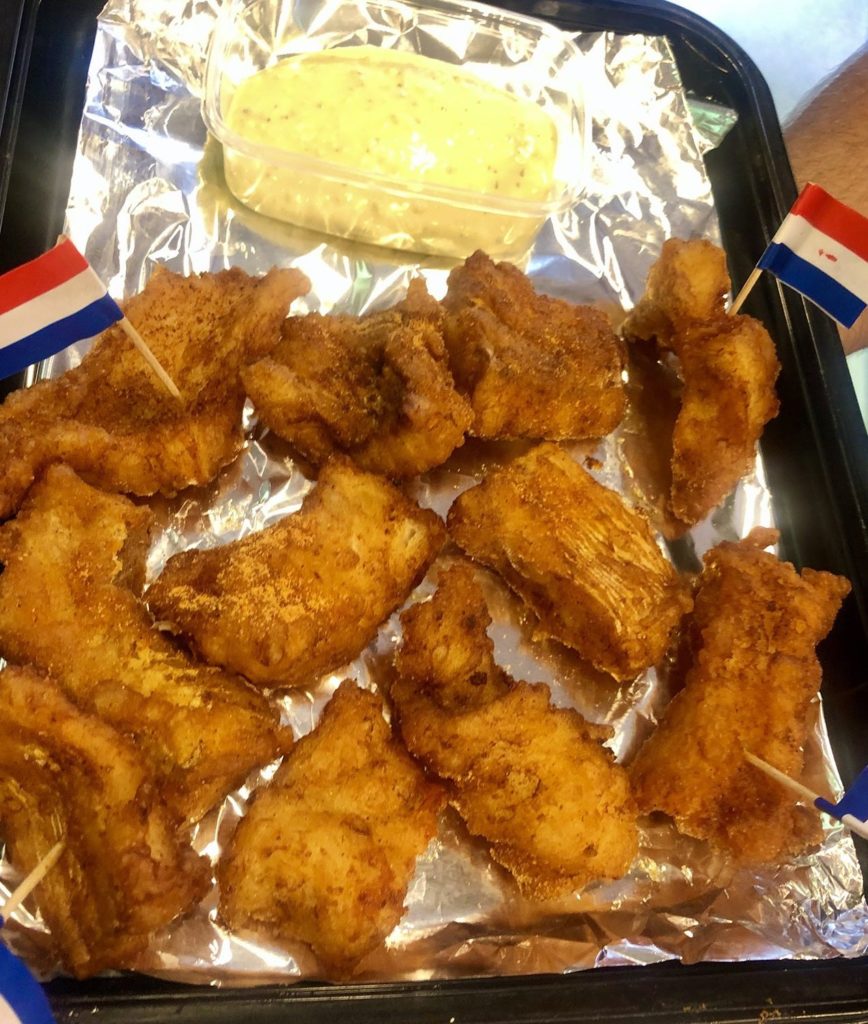 Dutch Apple Pie is the quintessential of Dutch desserts. It’s been part of the cuisine in the Netherlands for 500 years, making it one of the oldest Dutch foods and Dutch treats. 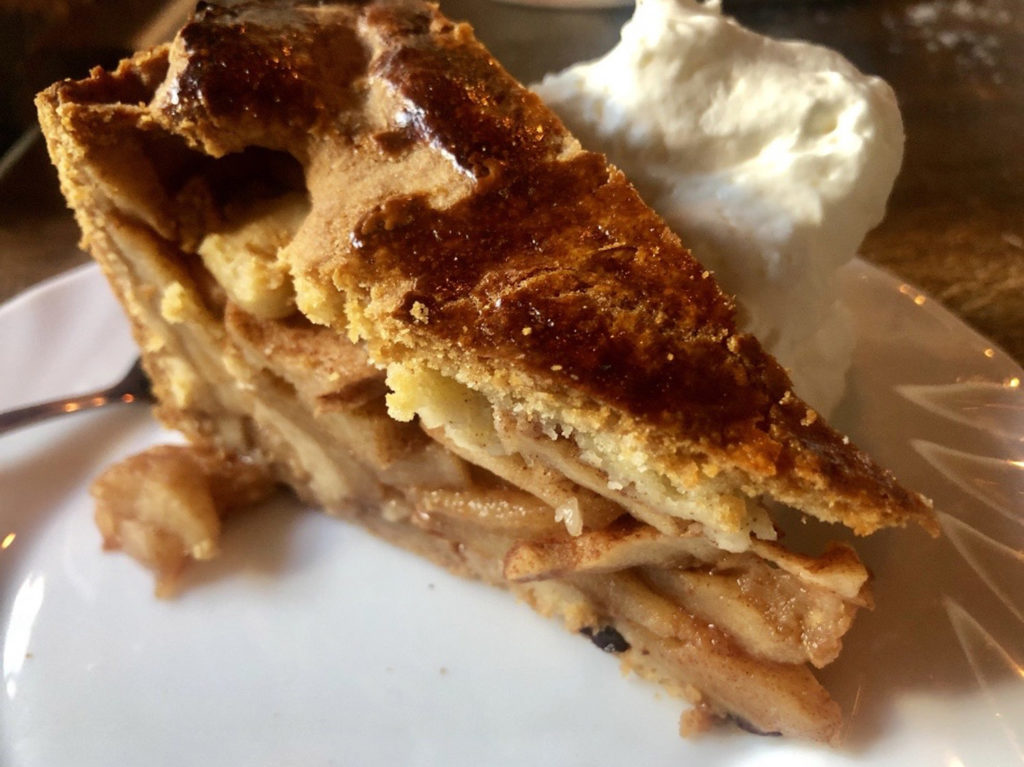 I enjoyed the perfect slice of Dutch Apple Pie at Café Papeneiland, a classic bruine kroeg, or brown café where they have been serving up draft ales and typical Dutch fare since 1642.  Their famed apple pie is still baked on the premises.  With a thick crust below layers of spiced apples and a rich, crumbly topping, it is similar to American apple pie, but not as sweet, the apples are densely stacked and it’s served with a giant dollop of fresh whipped cream.

My favorite of all the Dutch treats I tasted, the apple pie is an absolute must on any trip to Amsterdam. 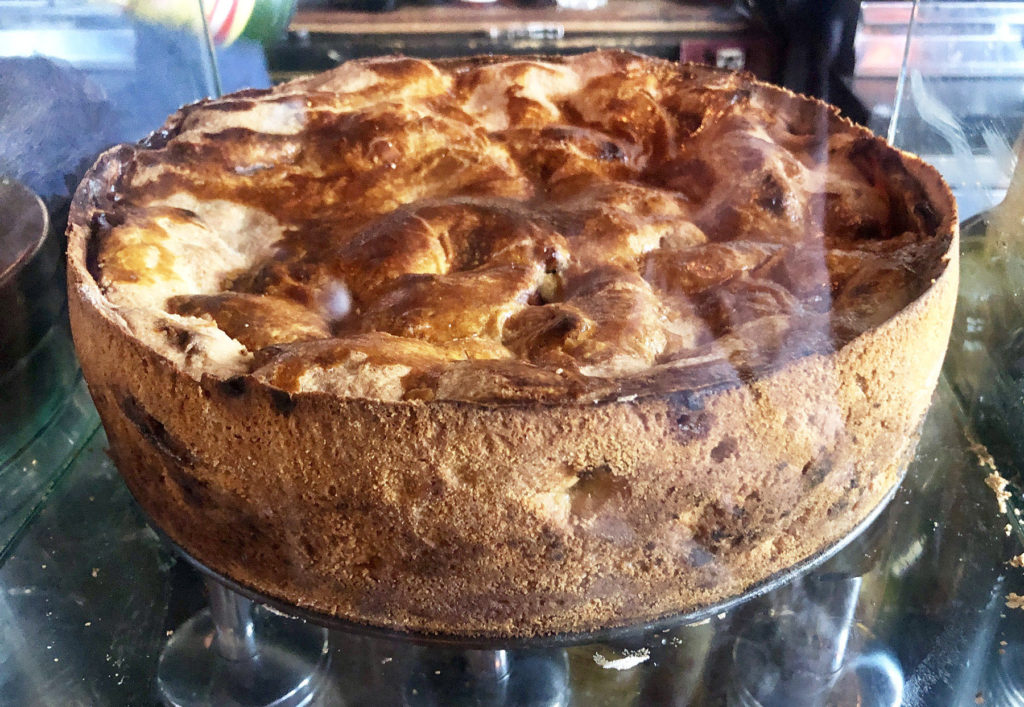 Snert is Holland’s version of pea soup. It is a thick green stew of split peas, pork, celery, onions and leeks.  It has a terrible name, but it is completely delicious and filling, especially served with warm brown bread and butter. A staple Dutch dish, you’ll find this served at many cozy Dutch bars that serve food and it’s a nice hearty dish in winter. 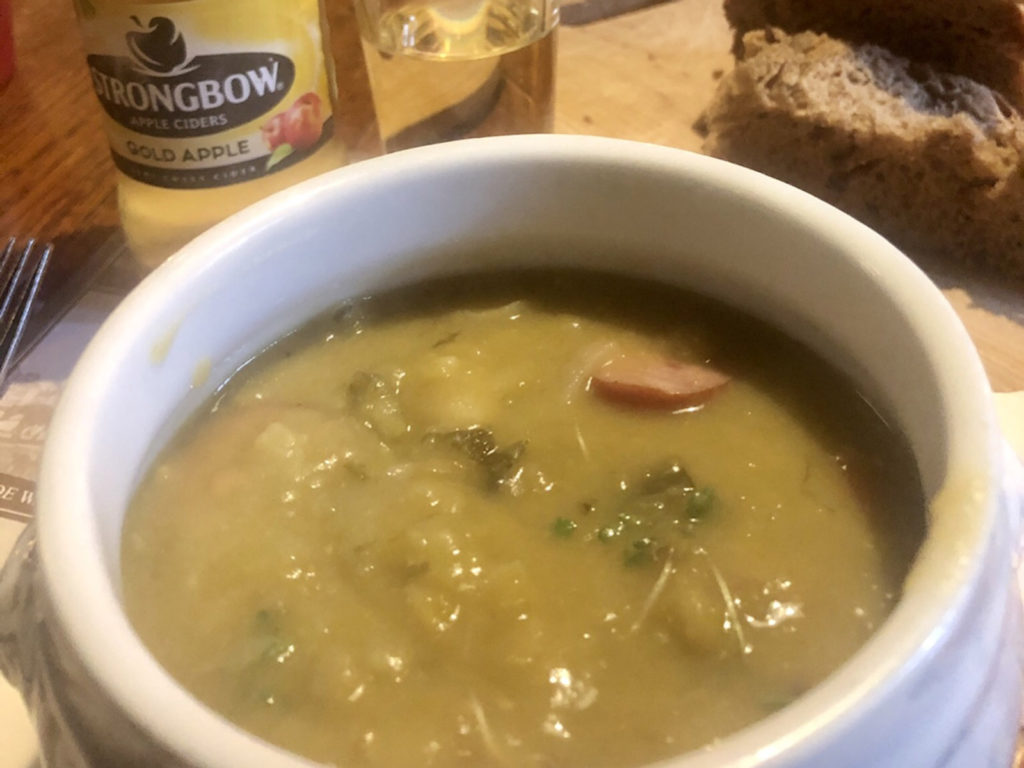 Poffertjes (PO-fer-jus’) are mini Dutch pancakes, generally made with buckwheat flour.  This yeasty batter is baked in a special pan with little circular depressions and flipped with a special-two-pronged fork.  These little fluffy clouds of battery goodness are served up at restaurants and pancake houses all over Amsterdam, but nothing can beat a bag of hot, buttery poffertjes from a street market vendor.  Sprinkled with powdered sugar and a squeeze of lemon – can you say yummy? 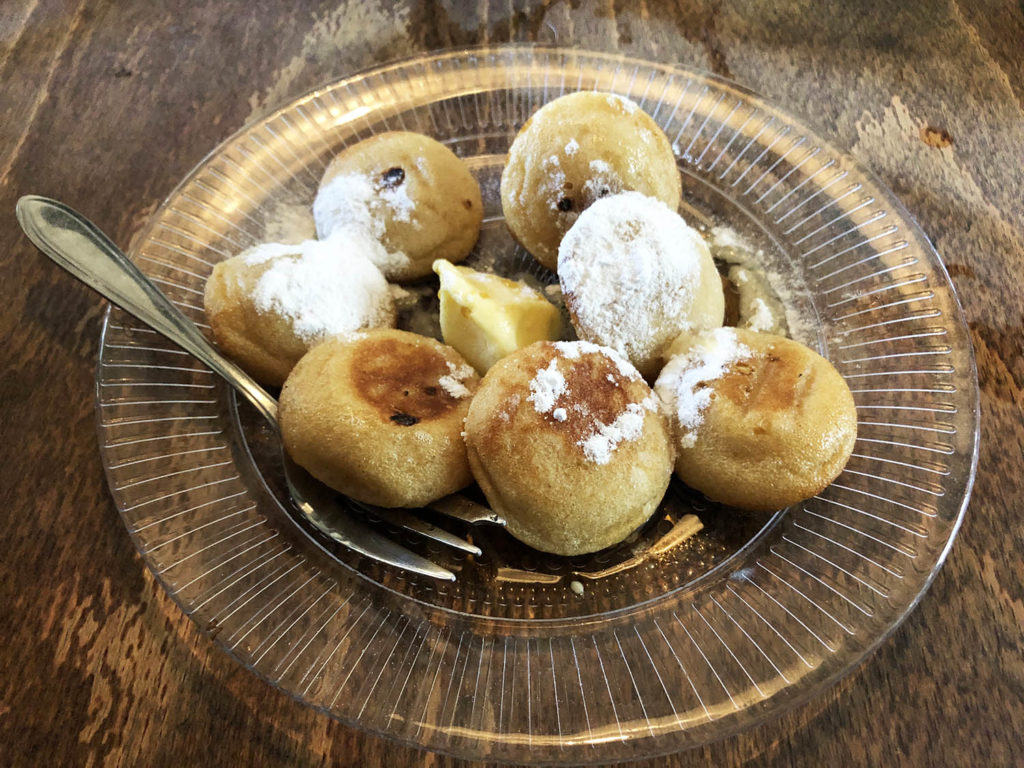 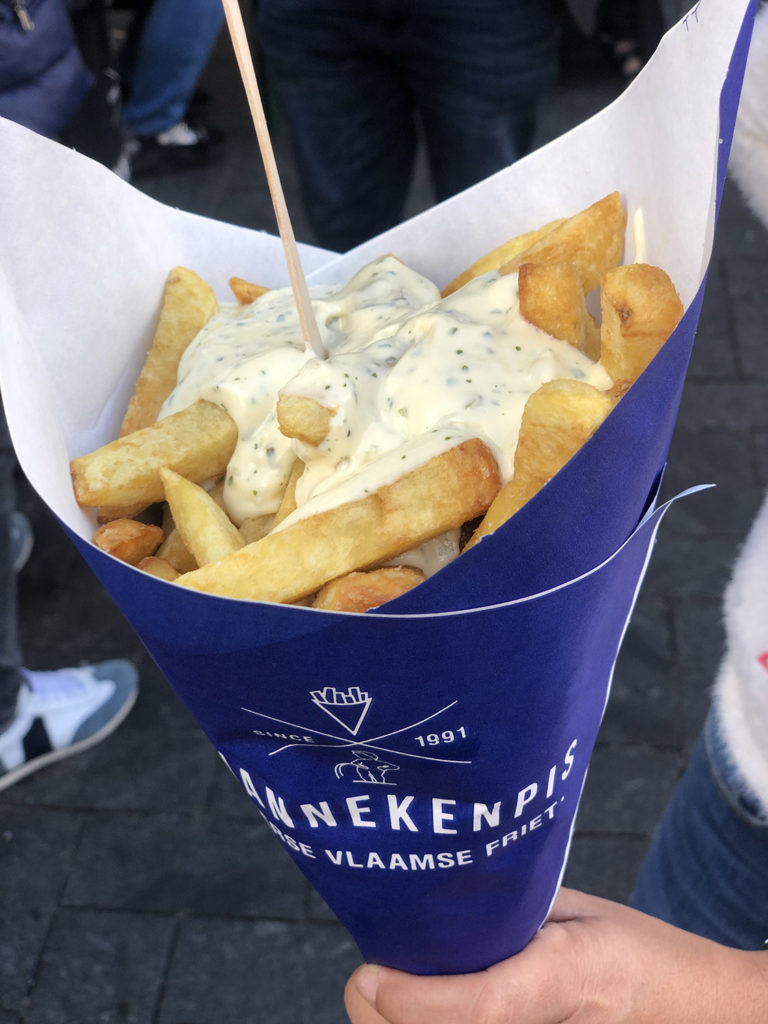 Patat frites are thick Dutch fries, but not just any fries, trust me. The line for these fries at popular snack shop called Manneken Pis snaked down the block, but was definitely worth the wait!  They are served piping hot in a paper cone slathered with all kinds of tasty toppings.  Ask for “patatje oorlog’ (‘fries at war’) – a dollop of peanut satay sauce, mayo and onions, or the ‘patat special’ – a mix of curry ketchup, mayonnaise and onions. 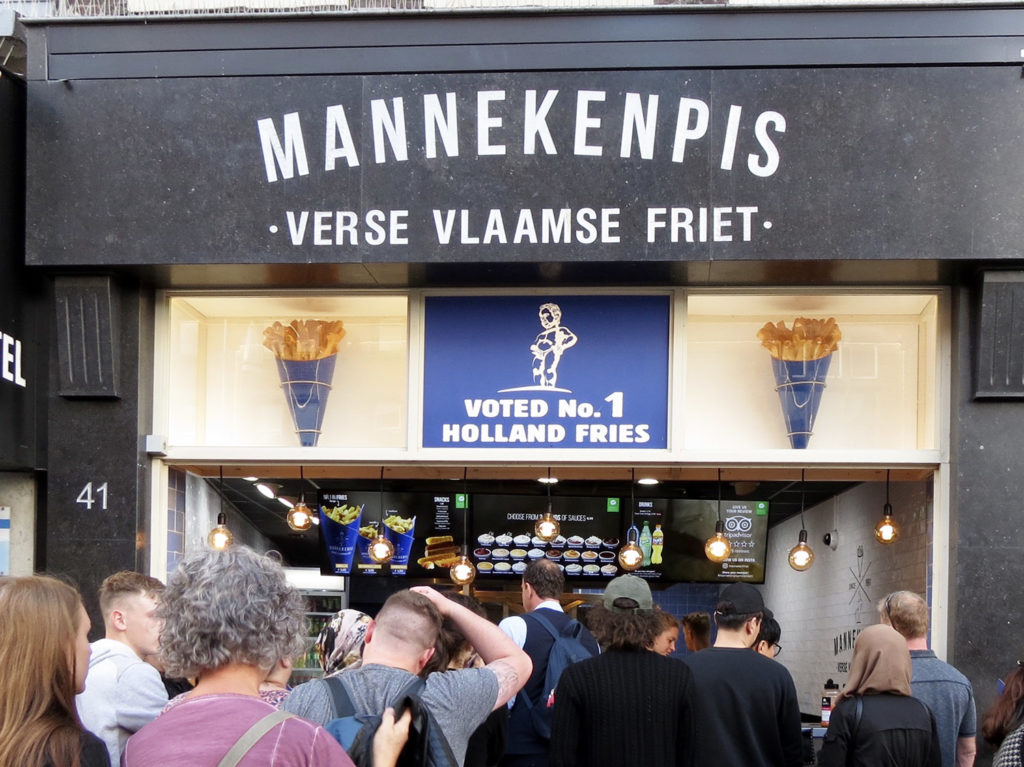 The line for these patat fries at Manneken Pis stretch around the block. (Photo Sharon Kurtz)

Bitterballen Served piping hot, these deep-fried crunchy meatballs are traditionally served with mustard for dipping. Made of bits of pork or beef in a ragout mixture and covered with bread crumbs, they are the ultimate Dutch pub snacks and can be found on the menu at most Amsterdam drinking establishments. They are delicious served with cold beer and are often very hot inside, so be careful with that first bite! 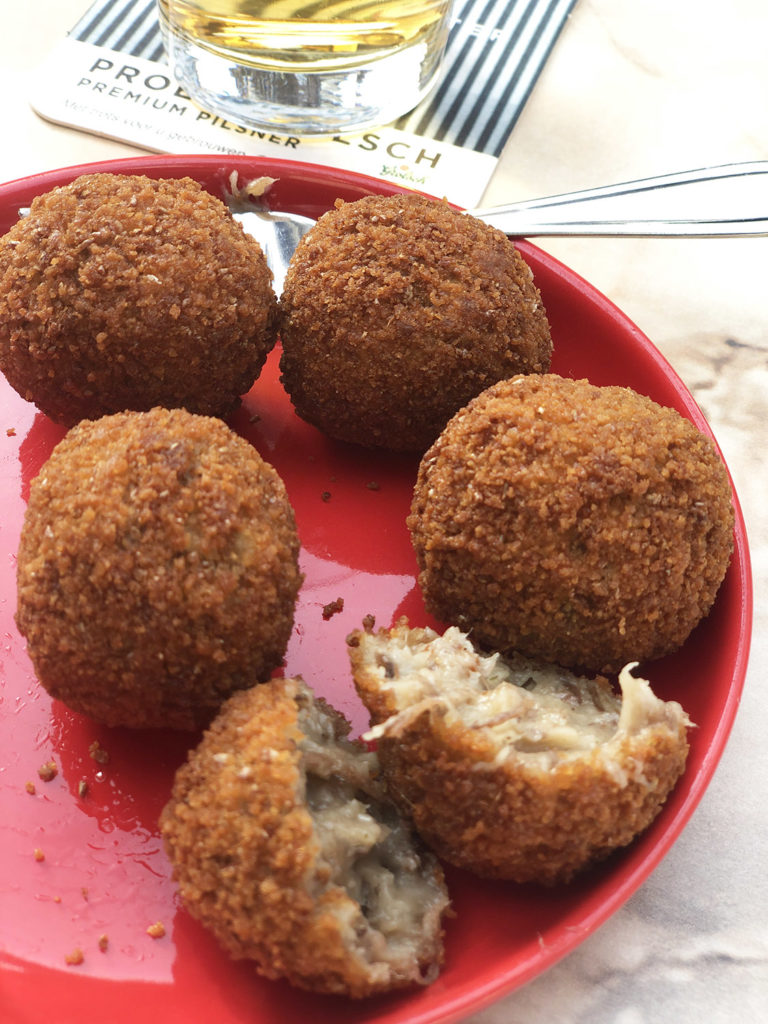 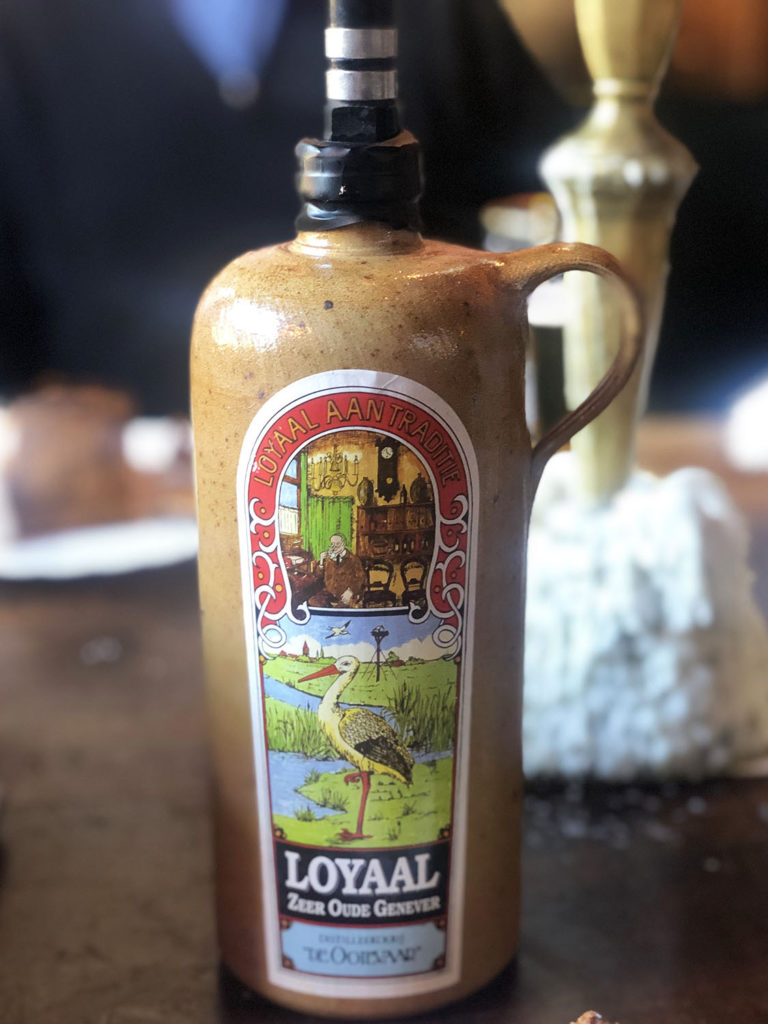 These last Dutch treats to try in Amsterdam are actually beverages. Genever (also known as Jenever) is the juniper-flavored traditional liquor of the Netherlands.  This clear, malted grain-based spirit is a blend two or more distillates – think of a mashup of whiskey and gin. There are tasting rooms throughout the city that date back centuries for an authentic Genever experience.

There are three traditional kinds of genevers – old (oude), young (jonge) and premium.  We tried a sampling of the three types of Genever on the final stop of our food and canal tour of Amsterdam at Café Papeneiland, along with their famous apple pie.

What? – You don’t normally drink liquor in the middle of the day with apple pie?  “When in Amsterdam…” 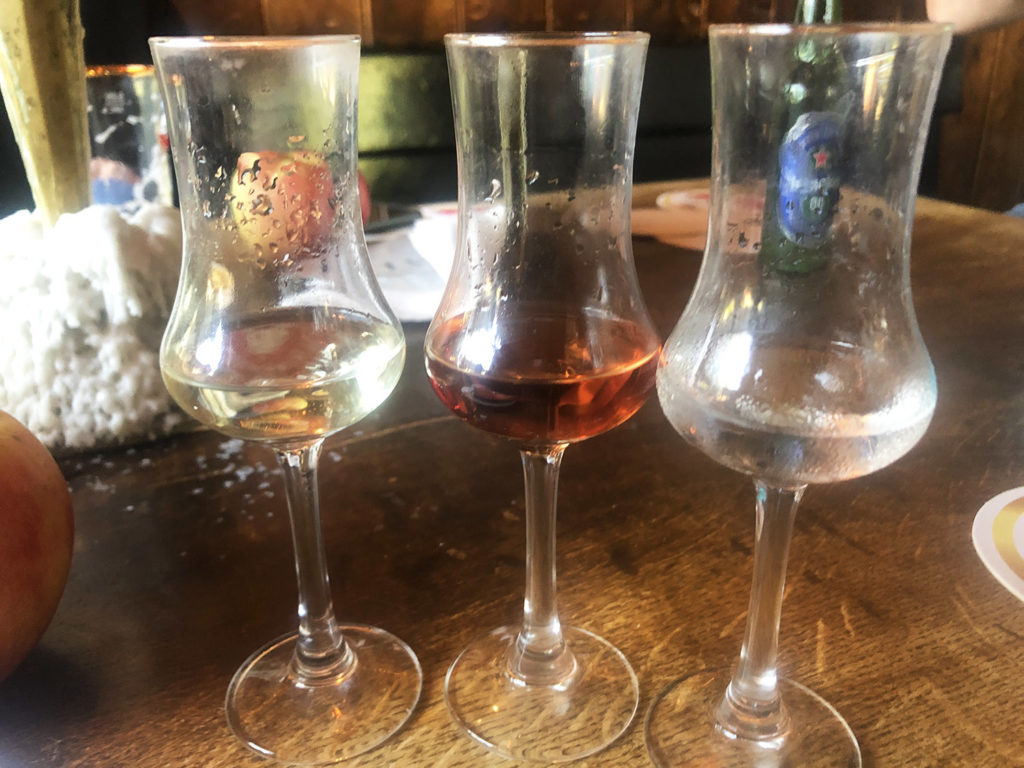 A Generver tasting at the historic Cafe Papeneiland, the spirit of the Netherlands (Photo Sharon Kurtz)

Note: The Amsterdam Food & Canal Tour experience https://amsterdamfoodtours.com was generously hosted by iamsterdam.com.  The stops on this tour partially contributed to my article.

Sharon Kurtz is a freelance travel writer who shares her passion for travel and food by exploring unique customs, culture and flavors from around the globe. She lives in Dallas, Texas with her husband and three dogs, but her carry-on is always packed ready for the next adventure. Follow her on her travels on Instagram and Facebook.

Calgary and Fort Worth: A Saddlebag of Similarities