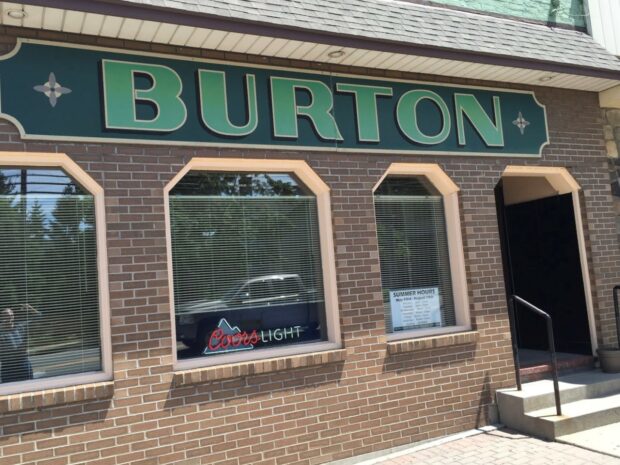 At the Bar, Food And Drink, Northeast, U.S., U.S. Destinations 7

The Burton: A Historic Tavern in Allegany, New York

What pops into your head when you think of a favorite tavern, pub, or corner bar? Corner bars are iconic to American culture. Nearly every small town has at least one favorite tavern or pub that draws the wayward and calls the wanderer home. In Allegany, New York, that place is The Burton.

The Village of Allegany is sixty-three miles south of Buffalo, nestled in a valley, south of ski country, just over imposing Humphrey Hill. Allegany is a college town. The Burton Tavern takes its name from the village’s origins. Established during the early 1800’s as a place of respite for travelers, The Burton was a typical tavern of the era. Food and drink were served there. There were sleeping rooms above. In that long gone era, the proprietors lived right on site. In recent decades the owners resided right across the street. And I lived next door to them. 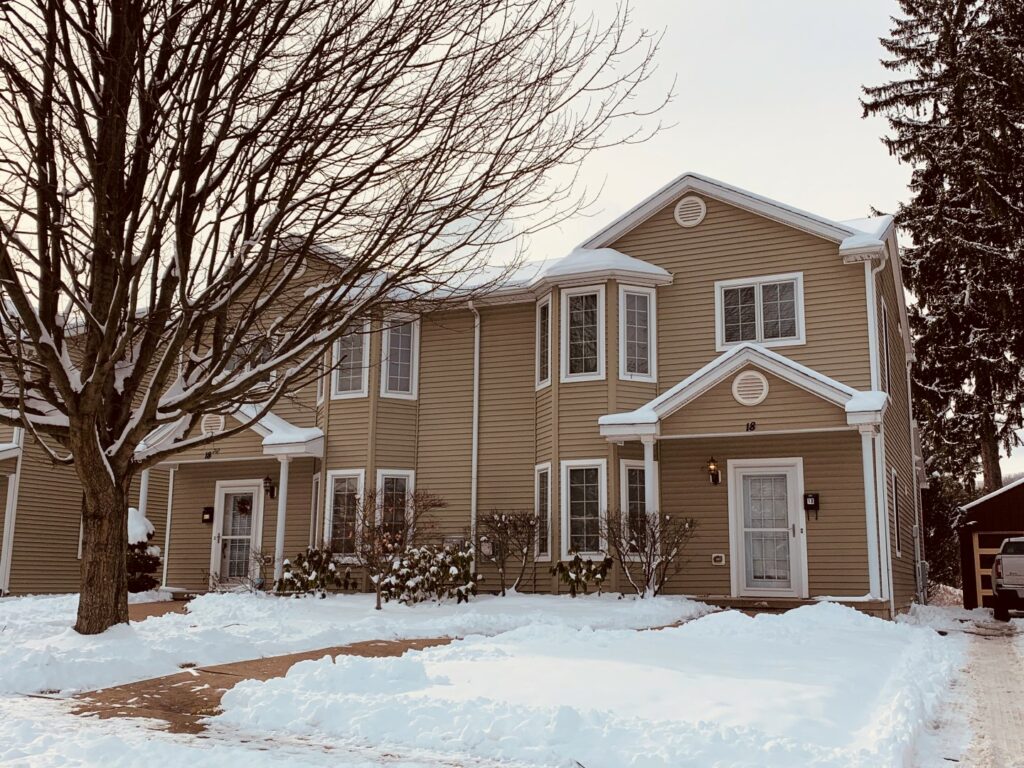 The Burton: From the Late 1800’s and Going Strong

The Burton is a “fan favorite.” What makes the place stand out among the three or four other options in town? It’s more than just the renowned Burton Burger, although that’s spoken about often and with reverence. The answer lies in Allegany’s favorite neighbor, St. Bonaventure University. The love affair between The Burton and the university extends back for generations. It’s a heart-strings situation, like a family. Today’s Burton patrons are the progeny of that love affair. Its new proprietors, who live and work many miles away, are the members of the family. Their bond runs deep. They saved The Burton.

Here’s the back story. The Village of Allegany, New York was founded in the late 1800s. It was called Burton then and was associated with the Holland Land Purchase. At the time, a prosperous couple from the area, Nicholas and Mary Devereux, set about establishing a college there. That college is today’s Saint Bonaventure University. Allegany, ideally set in a valley, was established along a railroad route from New York into the then sparsely settled but growing Midwestern United States interior. The couple lived over the mountain, on the other side of Humphrey Hill, in Ellicottville, New York. They were wealthy. In fact, they were prosperous enough to found and fund the building of the campus and bring Franciscan Friars from Italy to teach there. 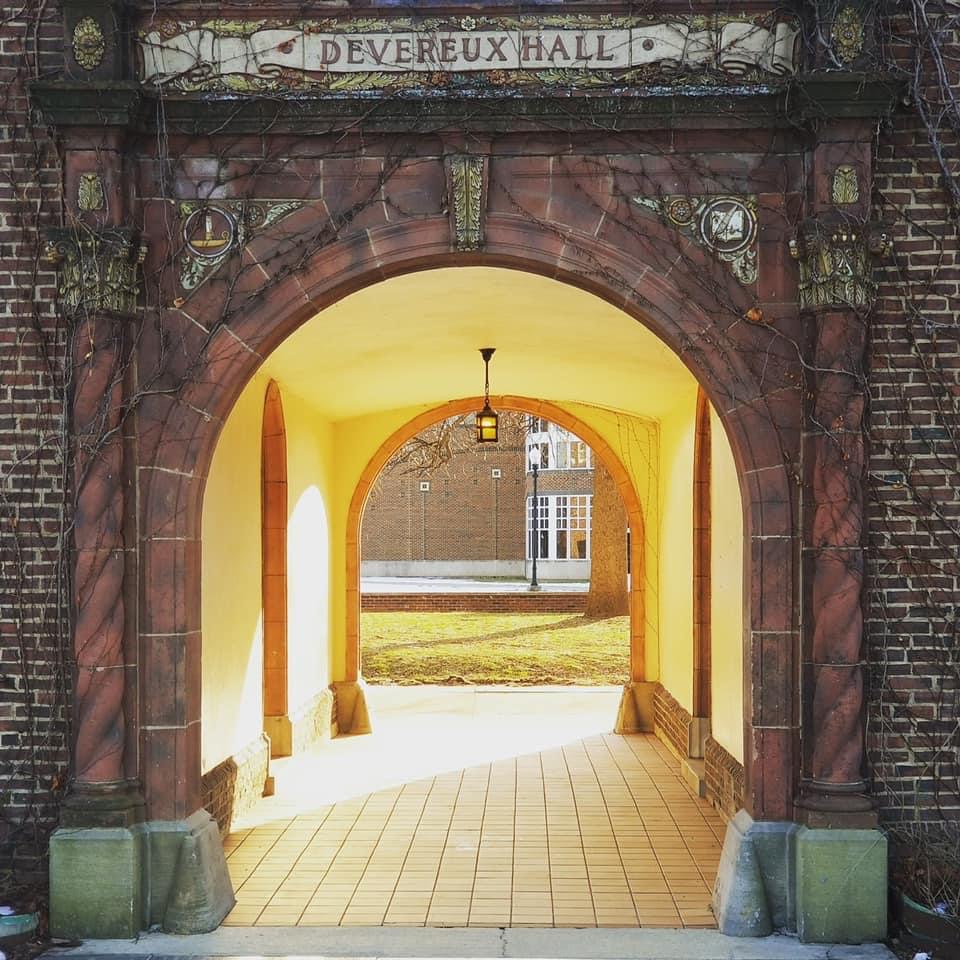 Community, Sports, Burger and a Beer

Today, among locals and far away visitors to Western New York’s Southern Tier, the Burton Tavern is famous. It’s the best place to stop for great company and sports on television, enjoyed with a burger and a beer. Indeed, the Burton Burger is the best, delectable enough to draw fans from miles away and distant shores. There’s no place quite like The Burton, where no one is a stranger. And, there’s no telling who might walk in the door, especially on a game night. It’s always a thrill, but never a surprise, to see an NBA or NFL legend saunter through the door, and it’s typical for sports reporters – familiar faces from television or newspaper headshots – to be there. No burger anywhere on earth compares to a Burton Burger, and it’s always best with a buddy and a beer.

The unique bar at The Burton (Photo courtesy of The Burton)

The interior of The Burton is unique. It draws you in. With retro flair, the bar is original, polished wood, and the stools are comfortable. There’s a large antique mirror behind the bar, along with an array of garish beer brand and liquor promotional objects. At each end of the bar are “the ladies.” The ladies are priceless antiques, dubiously clad, mysteriously backlit, and masterpieces of art deco.

Around the main barroom is a mix of well-used bench seating, recently supplemented with more modern high-top tables that were installed by the new proprietors. The upgrades were safe enough, not infringing on the overall vibe. No one would ever dream of changing much about the barroom’s vibe. And the ladies on either end of the bar … they’re sacrosanct. 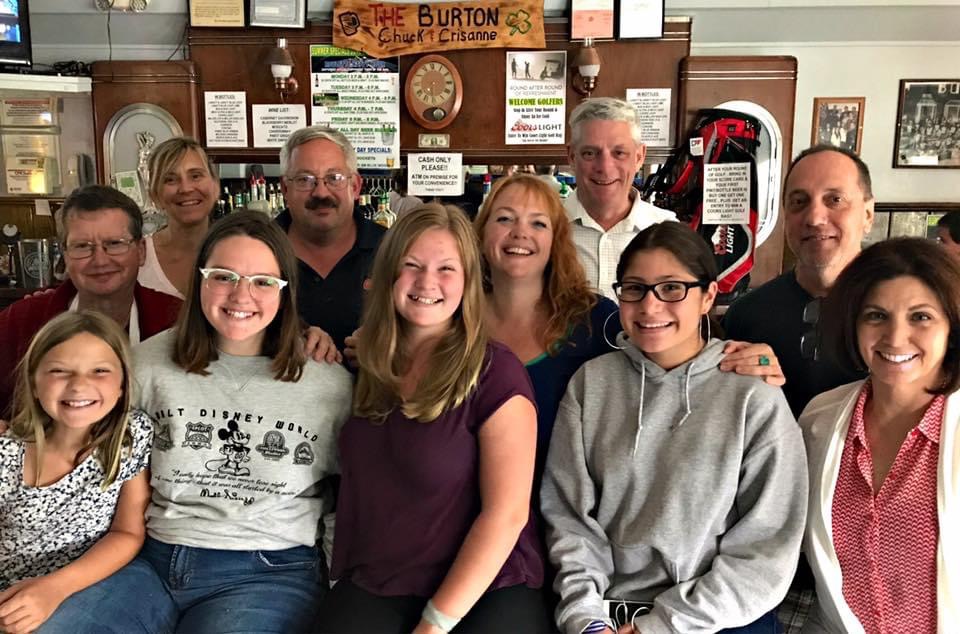 Family photo (Photo by and courtesy of Robert Rains)

To understand The Burton’s affinity, it is essential to have a sense of the college and the town. The college is small, family-oriented, and its graduates’ favorite place on earth.  Allegany has a couple of other popular watering holes, but The Burton is the granddaddy of them all. It’s a magnet that has drawn generations of college students (over 21 and drinking responsibly), their parents, their grandparents, and assorted visiting alumni. 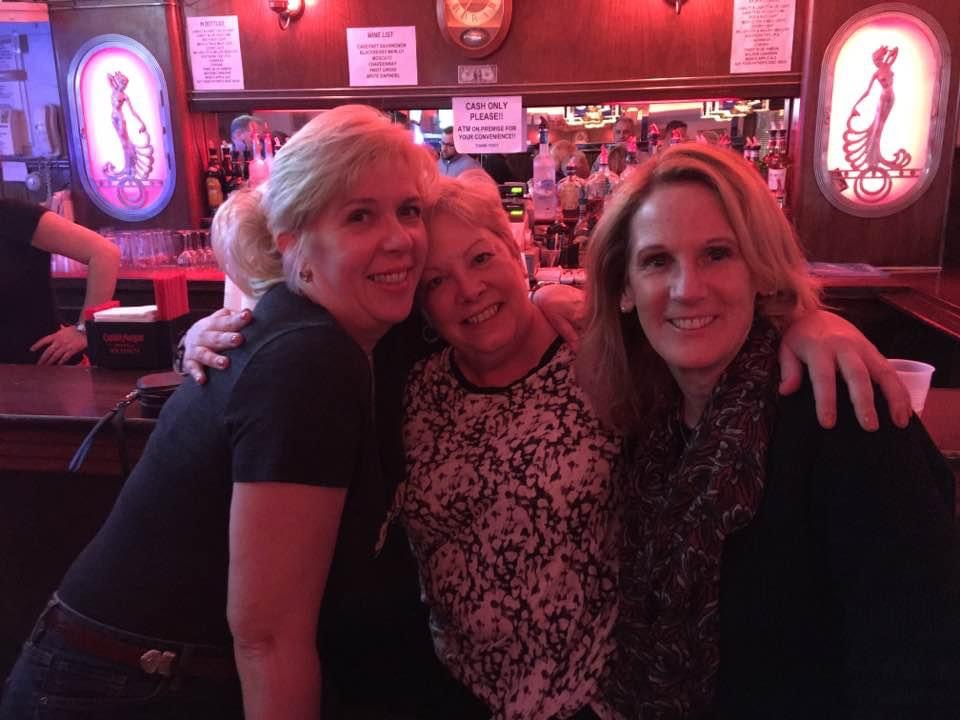 Ladies of the Burton (Photo courtesy of The Burton)

This is the place to revisit friendships, relive youth, and to cheer on the college basketball team. To wit, parents and alumni are often the same.  Those famous athletes, journalists, and celebrities have treasured memories of warming The Burton’s seats on cold winter evenings.  The ones who played on the Reilly Center (RC) court as collegiate athletes love to repeat the experience of small college, big reputation basketball. The Burton has long been considered the “Reilly Center West.”

The Burton isn’t very large. Whatever the weather – and it can be brutally cold in Allegany – with a beer or two for encouragement, Burton Burgers and enthusiasm quickly warm the place. 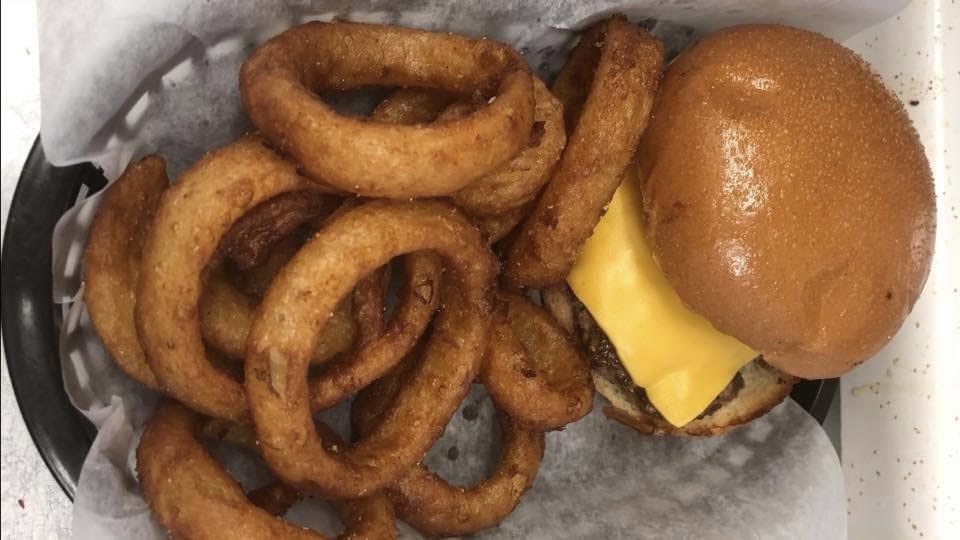 The Burton Burger: made to satisfy (Photo courtesy of The Burton)

Seasoned with Warmth Through Its History

The Burton experience is seasoned with the warmth of those who have long loved it. Its contemporary era begins with the Collins family, proprietors since the 1970s. Patriarch, Patsy Collins, owned the place until its sale to his children in 2013. Without skipping a beat, he passed the keys over to his daughter, Crissanne, and son, Chuck. The two carried on its traditions, its décor, and its menu. Since Patsy’s founding forty-three years ago, The Burton remained the same enclave, the same haven. The Collins family home sits directly across the street from the place. Many of its patrons lived in the neighborhood as students. Everyone in town knew them. The family and the business were, and still are, inextricable.

Alarmingly, in March of 2019, a sudden, unexpected alarm sounded. The news spread far and wide. How can this be? The Burton went on the market.

For personal and family reasons, it became no longer practical for the two siblings to continue to run the place. Among its vast extended family of patrons, this was cause for concern and a call to action. What will become of our home away from home? What will happen to that particular place, the ambiance, the barroom, the Burton Burger? Redecorating? Unimaginable! And, what would become of the ladies? Clearly, The Burton is much more than a bar. It is tradition. It’s a haven. It’s a lifestyle. It’s a home away from home. The Collins family assured their patrons that The Burton would remain open until a buyer came forward. The clock was officially running on “what’s next.”

After several anxious months, much debate, indecision, and consideration, a cadre of buyers emerged. After serious deliberation, a tightly knit group of Saint Bonaventure graduates living and working in separate cities and states many miles away, stepped up to save the Burton. Save it from what? From change, of course. Their appreciation for the ambiance, the libations, the convivial atmosphere, tradition, and that burger led them to the decision to take on the legacy.

According to Boston-based co-proprietor, David, four of the partners were college athletes, three had worked at The Burton as students, and two met their wives-to-be there. The partner living closest – in Buffalo – helps keep tabs on the place. The one who lives farthest away uses the bedroom above the bar when he visits Allegany, just like it was used in the long ago days of stage coach travel and railroads. In their view, buying The Burton was a “must do, investment in history,” and not without risk.

With some slight improvements to the décor and infrastructure, there seems to be just the right amount of difference in The Burton these days. Chuck is still behind the bar, pouring beer and mixing drinks. The burgers, and the rest of the menu, come out of the kitchen, prepared by his sister, exactly the same. The crowd is still just as sports-minded, but with new, large screen televisions for better viewing. Locals, students, parents, and grandparents continue to lovingly stop before and after basketball games. And one never knows when a famous NBA or NFL athlete might turn up, not to mention our favorite sports journalists.

The Burton is in Good Hands

As life goes on, The Burton faithful breathe a sigh of relief and raise a glass, knowing the place is in good hands with its culture safely preserved for future generations. 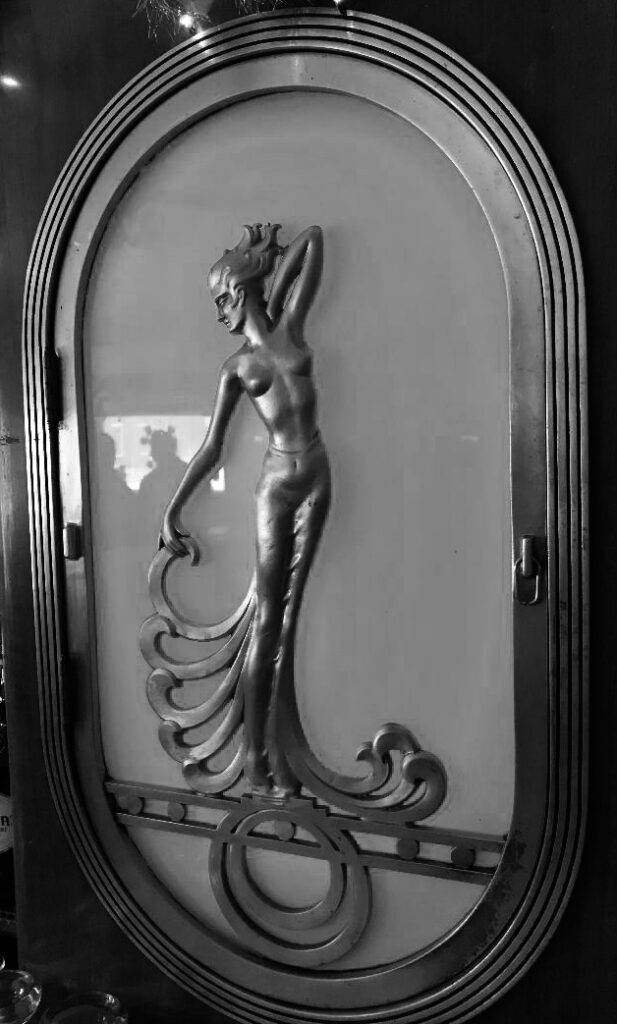 -All photos as credited. Cover photo courtesy of the Burton.

Based in North Carolina, Monica Mattioli's passion for storytelling sparked during business trips that took her from New York to San Francisco, all around the Southern US, and internationally to Brazil and Italy. Her background spans marketing, public relations, academics, travel and tourism. Equally at home at the keyboard and on camera, Monica is a people person with a gift for languages. Reporting these days primarily from the U.S., number one on her travel bucket list is Hondarribia, Spain, a village in the Basque Country. Visit her via Instragram and follow her blog, MokesOnTheMove.