The Life, Times, and Birthplace of President James Polk 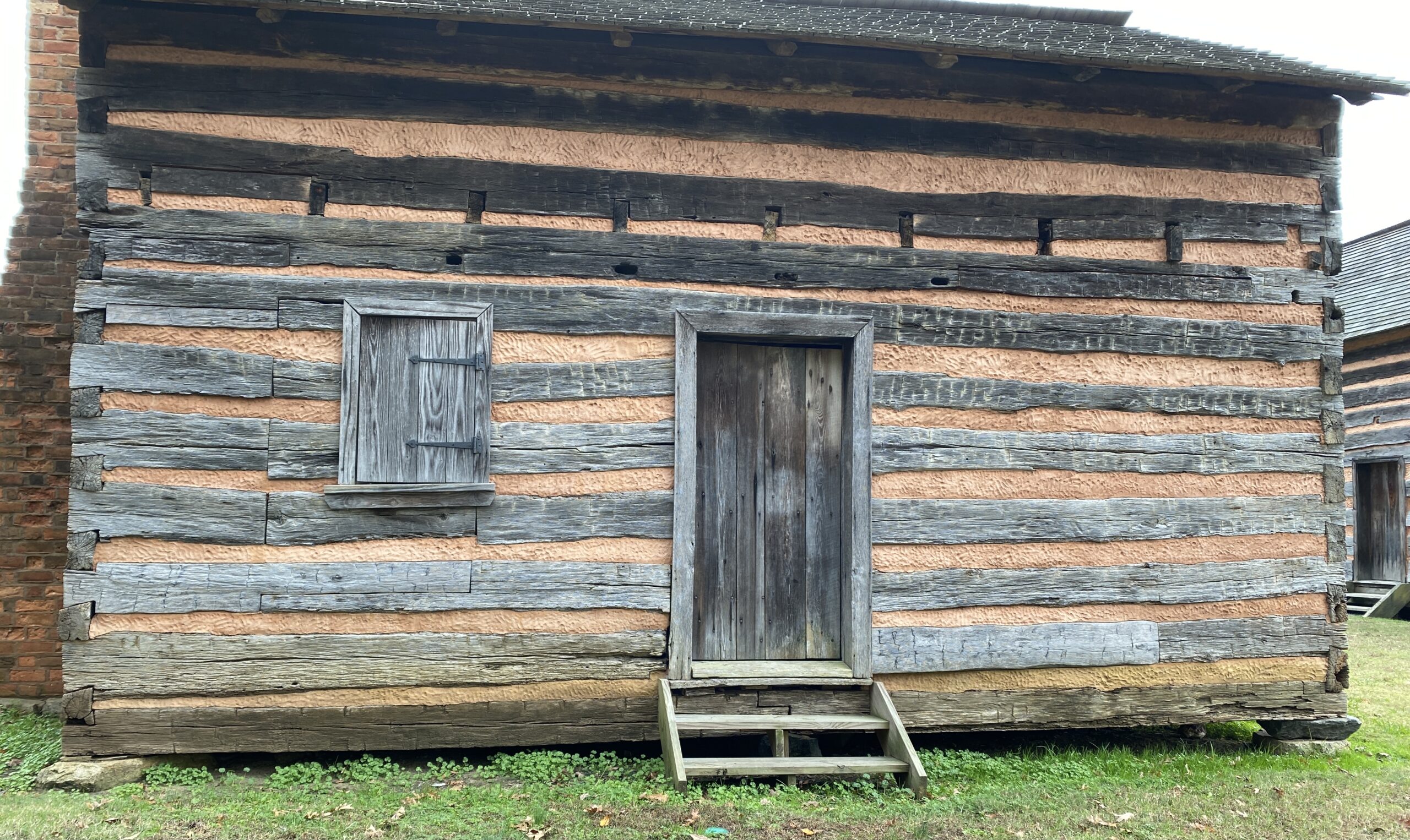 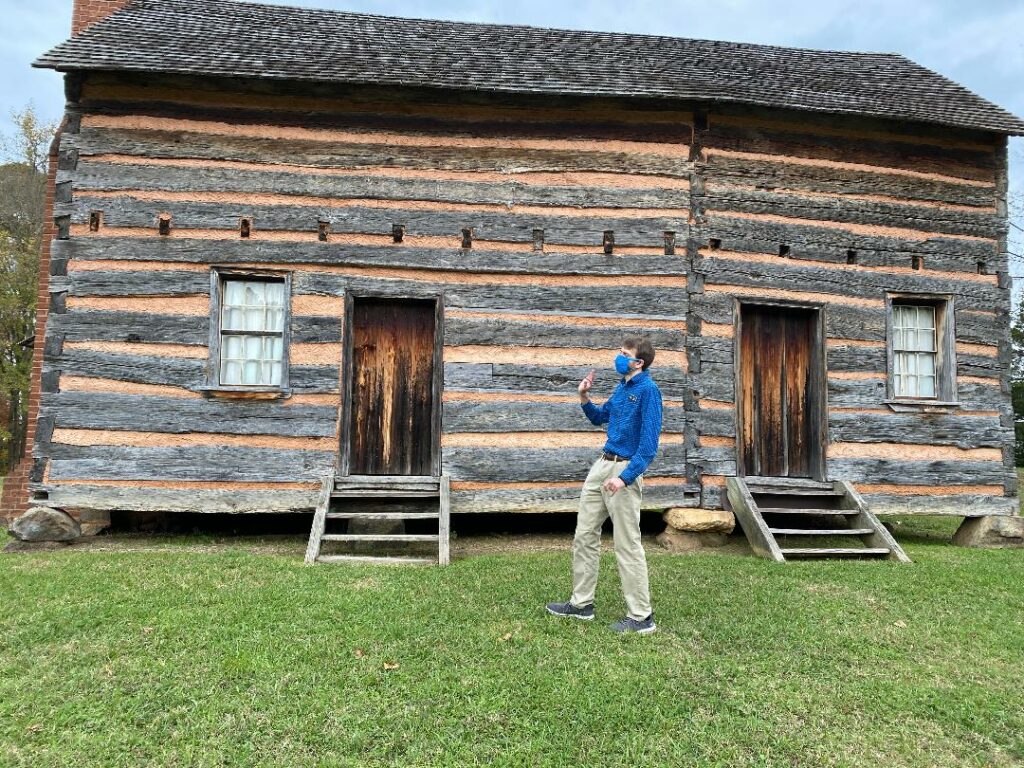 On any given day, an estimated 107,00 vehicles pass through Charlotte, North Carolina, traveling along I-485.  Originally envisioned as a four-lane rural freeway, area development has changed that. I-485 is currently among the top ten most heavily traveled highways in the state. In addition, Metro Charlotte’s population is increasing as an estimated influx of 100 people per day move to Charlotte. Yet, on a few simple, rustic acres, just a short detour from the highway, lies the Pineville, N.C. birthplace of President James Polk.

Serving from 1845 to 1849, his life ending just shortly after serving his single term, Polk is often misattributed as a son of Tennessee. His earliest years, however, were spent in then-rural Pineville. A bustling suburb of Charlotte and the first home of America’s 11th president,  Pineville is steeped in historical significance, and a visit to his birthplace is worth the segue! The future president resided there until about six years of age before the family moved to Tennessee. 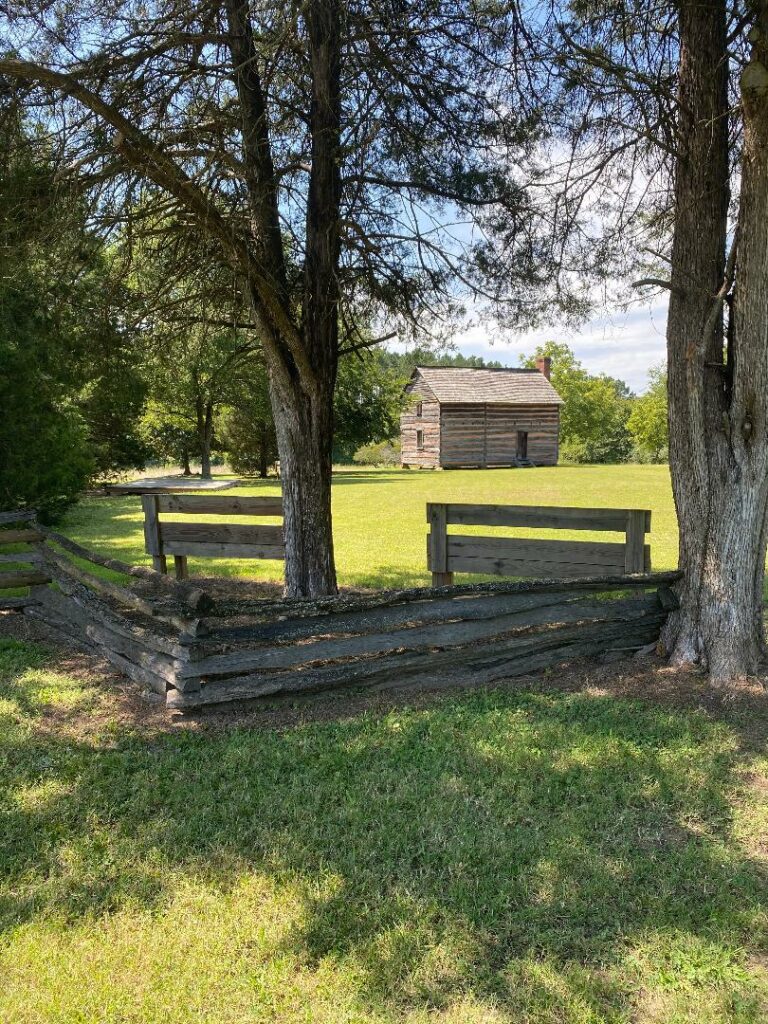 President Polk was tough, and his presidency was not without controversy. Dubbed “Young Hickory,” this moniker referred back to his mentor, “Old Hickory,” President Andrew Jackson. Whether dropping by the President James K. Polk State Historic Site for respite from the road or for a guided tour, visitors are consistently impressed by the history, the grounds, the site’s programming, and the knowledge of its welcoming and informative staff. Just a short drive beyond the mall, you will encounter a park-like setting, intersecting a greenway, then up the hill to the main visitor center. Historic markers guide you along the way.

Start your trip to the birthplace of President James Polk with a tour of the indoor exhibits, then move along to the outdoor expanse. This features several replicated structures – houses, barns, etc.. Be sure not to overlook the family graveyard set at the top end of the property. There are multiple gardens throughout, including a typical kitchen garden of the era and a garden that attracts bees and other pollinators. Benches are scattered about the property, offering a choice of sun or shade. Take note of indications of Eagle Scout projects on the property. Wander about at your own pace. You can strategically start by focusing on the outside while saving the gift shop for last, then taking your time to peruse the Americana flair of the goods for sale. 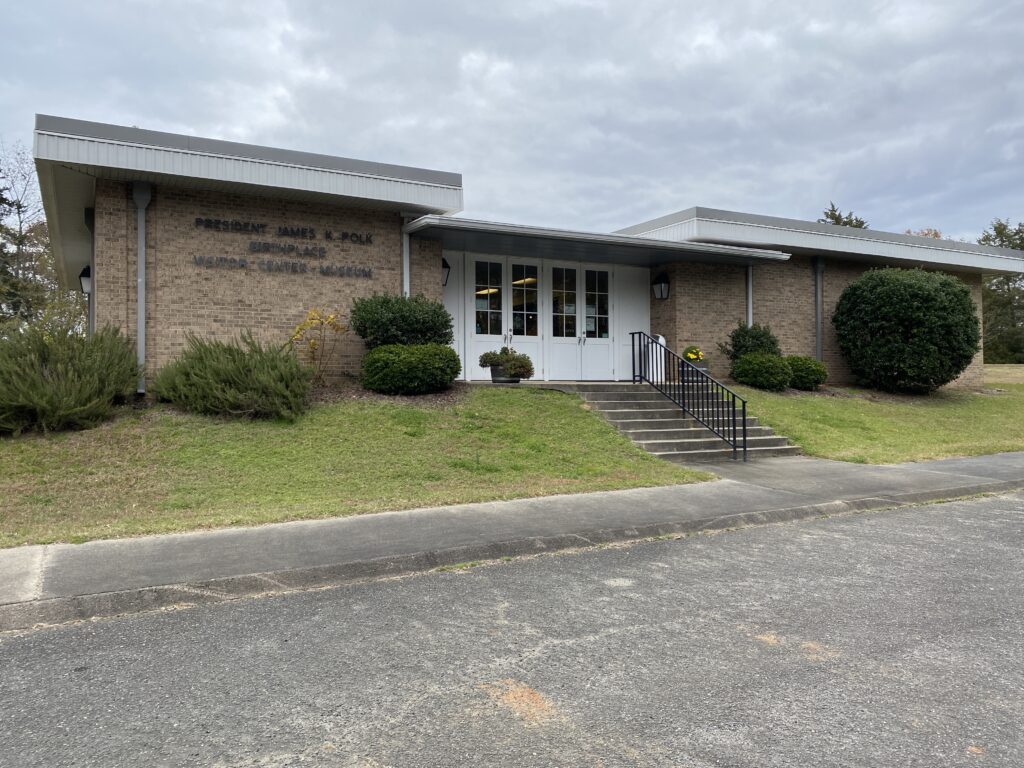 A Life of Rustic, if Not Humble, Beginnings

Life for the Polk family was decidedly rustic. Special tours featuring the insides of the structures are offered regularly (see the website for current calendars and pricing). Furnishings are spare, multipurpose tools and utensils are plentiful, and the beds are, well…. short!

It was typical during the era for leaders to emerge from simple upbringing and humble homes. Polk’s family, though relatively well-off, occupied surroundings that were anything but grand. Use your imagination to forget you’re in contemporary Charlotte and allow yourself to be carried away to an era of living off the land and making the best of what nature provided. It is easy to imagine the fishing, hunting, and farming that filled a typical day for the Polk family. But remember, this family was comparatively comfortable, and the father was active in local affairs. Typical for the day, yes, the Polk family were slave holders in both North Carolina and Tennessee. 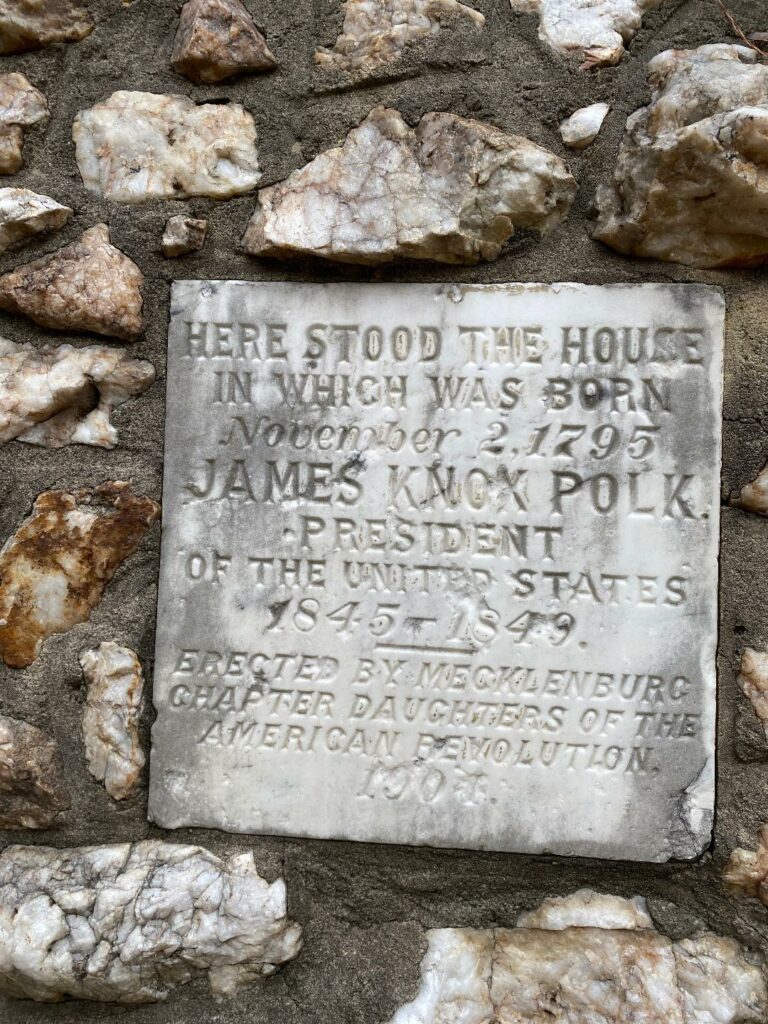 Here you will learn about the roots of the inspirational and aspirational choices and goals associated with Polk’s presidency, for which he prepared through life experience and education. He attended the University of North Carolina and was admitted to the Tennessee Bar in 1820. He served in the Tennessee state legislature from 1823-1825, was a two-term House Speaker from 1835-1839, governed Tennessee from 1839-1841, and ascended to the Presidency of the United States in 1845. Unfortunately, Polk died three months after leaving public office. 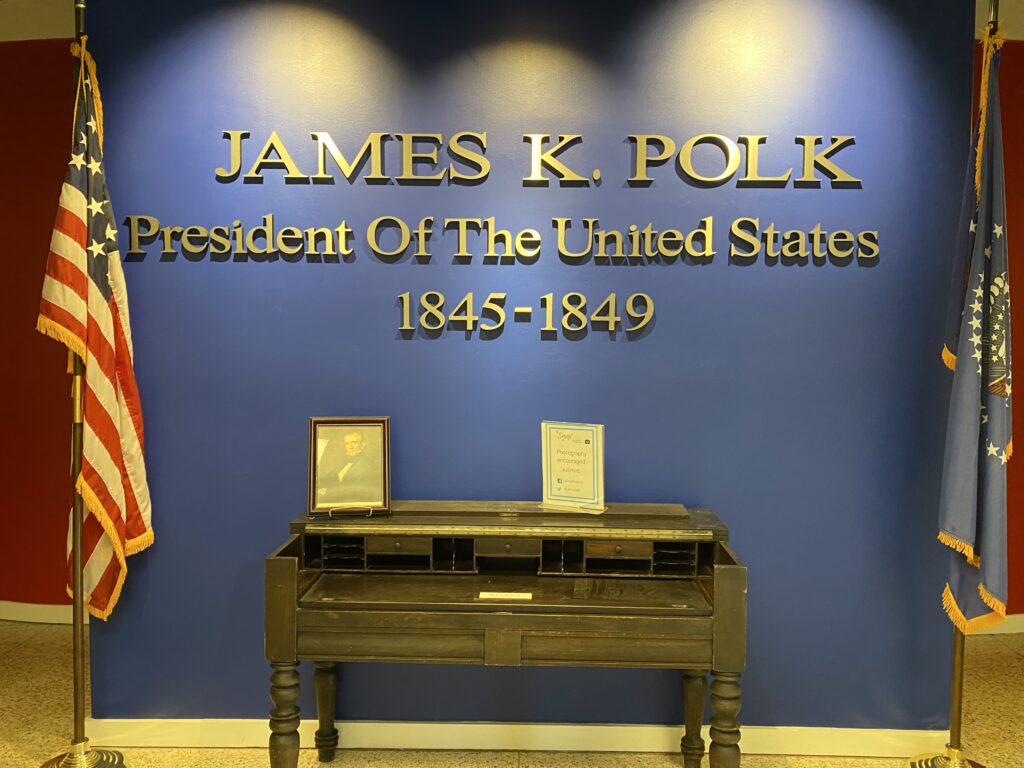 A Presidency of Achievement and Controversy

Even from before the start of his presidency, Polk’s political career was controversial. As a result of his relationship with President Andrew Jackson, Polk gained experience in the House of Representatives prior to becoming Governor of Tennessee. His election to the Presidency was more the result of political upheaval among more popular candidates, such as Martin Van Buren and Henry Clay.

Polk’s position in favor of expansion, that is “Manifest Destiny,” along with Jackson’s support, ensured his selection as the Democrat Party candidate. He was elected amidst acquisition of California, which severed the U.S. relationship with Mexico and precipitated war.

A Legacy We’re Familiar with Today

Among Polk’s many achievements and activities, his pre-Civil War endeavors expanded the boundaries of the nation. He was the first to invade another country. He added three states. And he established the treasury, served during emerging women’s rights movements and through the gold rush.

Once elected, Polk further claimed what is now Oregon and farther northward to Alaska, held at the time by Russia. The movement, sparking the “Fifty-four forty or fight” battle cry, proved provocative to both Great Britain and Russia, thereby rendering further expansion impractical. A treaty was reached to settle the matter at the 49th parallel, excepting the southern tip of Vancouver Island. Conflict with Mexico was a more challenging matter. Settled with violent conflict and at great expense, the United States gained territory through superior military strength. Difficult diplomacy ensued at hefty cost to the US.

These acquisitions further enflamed the nation’s domestic conflict over the issue of slavery. While holding the nation’s highest office, Polk persisted in slave holding during his administration, incorrectly characterized as “inherited.” In truth, while in office and contrary to his public persona, Polk is known to have secretly further acquired slaves and separated families, far away from the public eye at this private home. 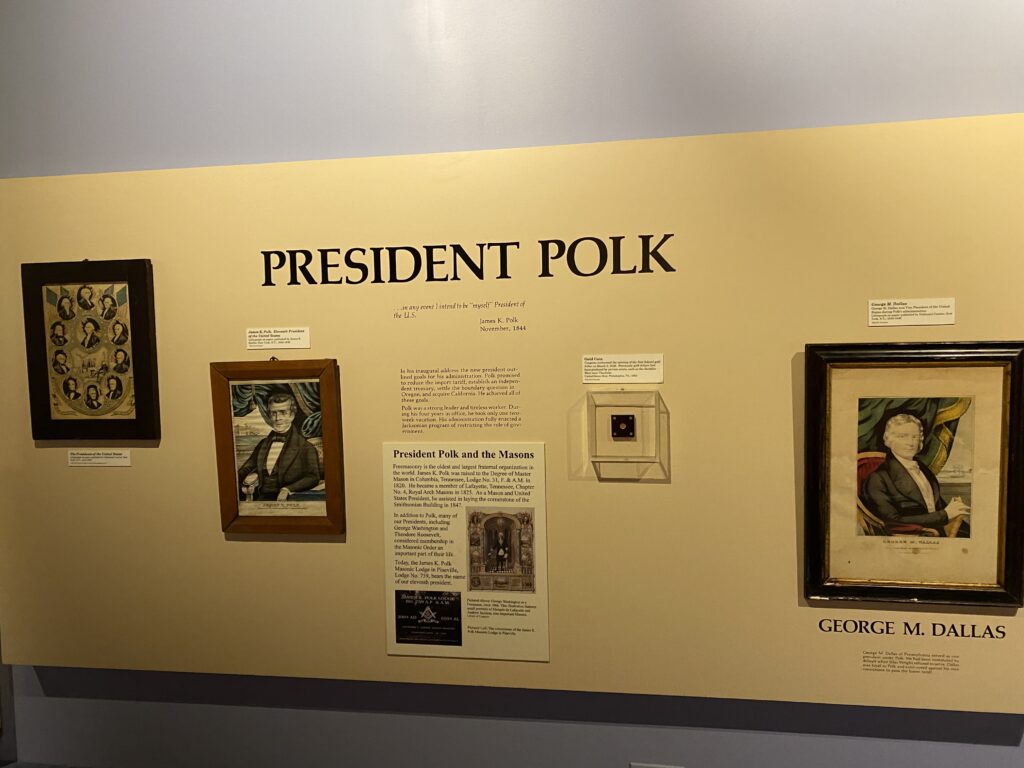 More to See and Do in the Vicinity

Also of interest and not widely known, North Carolina was a source of gold, with mines scattered around the state. In addition, there was a U.S. Mint located in the Charlotte metro area, striking its first gold coins in 1838. Keep that in mind as a tour for another day.

If your travels take you through Charlotte, this Historic Site and birthplace of President James Polk is a worthy stop. Stretch your legs, catch your breath, peruse the gift shop, and recognize that you have discovered someplace special. A self-guided tour through the property, gardens, structures, and gravesite should take no more than an hour or two. Scheduled interpreter-led experiences are available, as well, when reserved through the website. Afterward, just that quickly, you can be back on the road, having enjoyed a memorable experience. 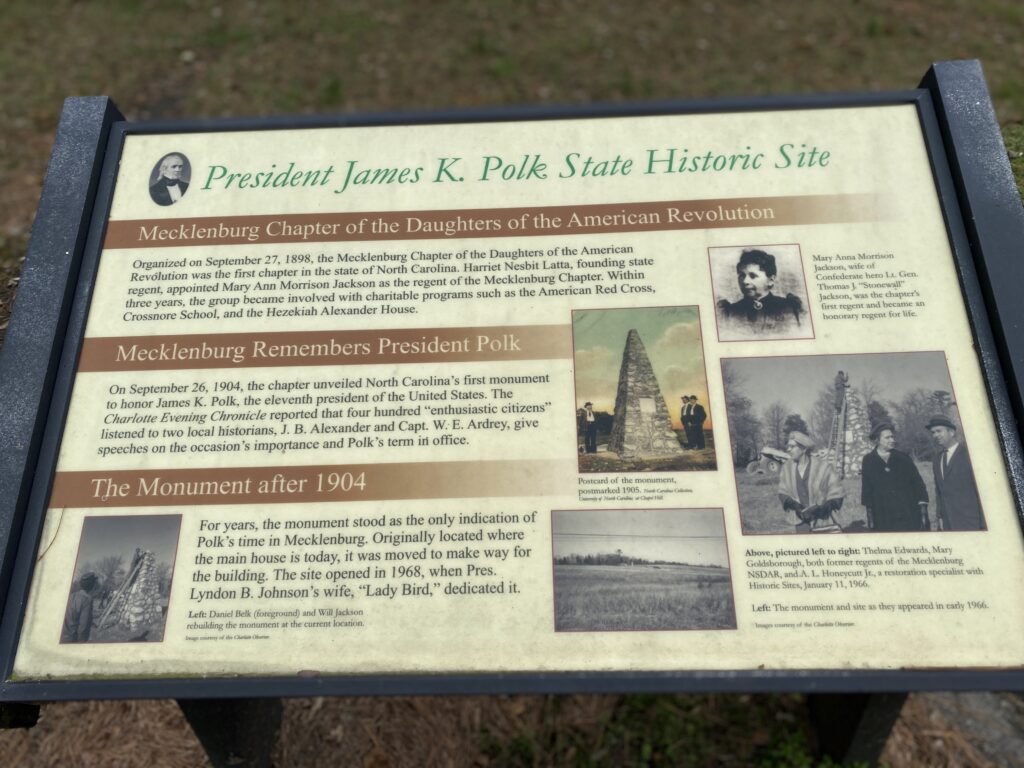 -All photos by Monica Mattioli.

Based in North Carolina, Monica Mattioli's passion for storytelling sparked during business trips that took her from New York to San Francisco, all around the Southern US, and internationally to Brazil and Italy. Her background spans marketing, public relations, academics, travel and tourism. Equally at home at the keyboard and on camera, Monica is a people person with a gift for languages. Reporting these days primarily from the U.S., number one on her travel bucket list is Hondarribia, Spain, a village in the Basque Country. Visit her via Instragram and follow her blog, MokesOnTheMove.