Visiting Rome For the First Time 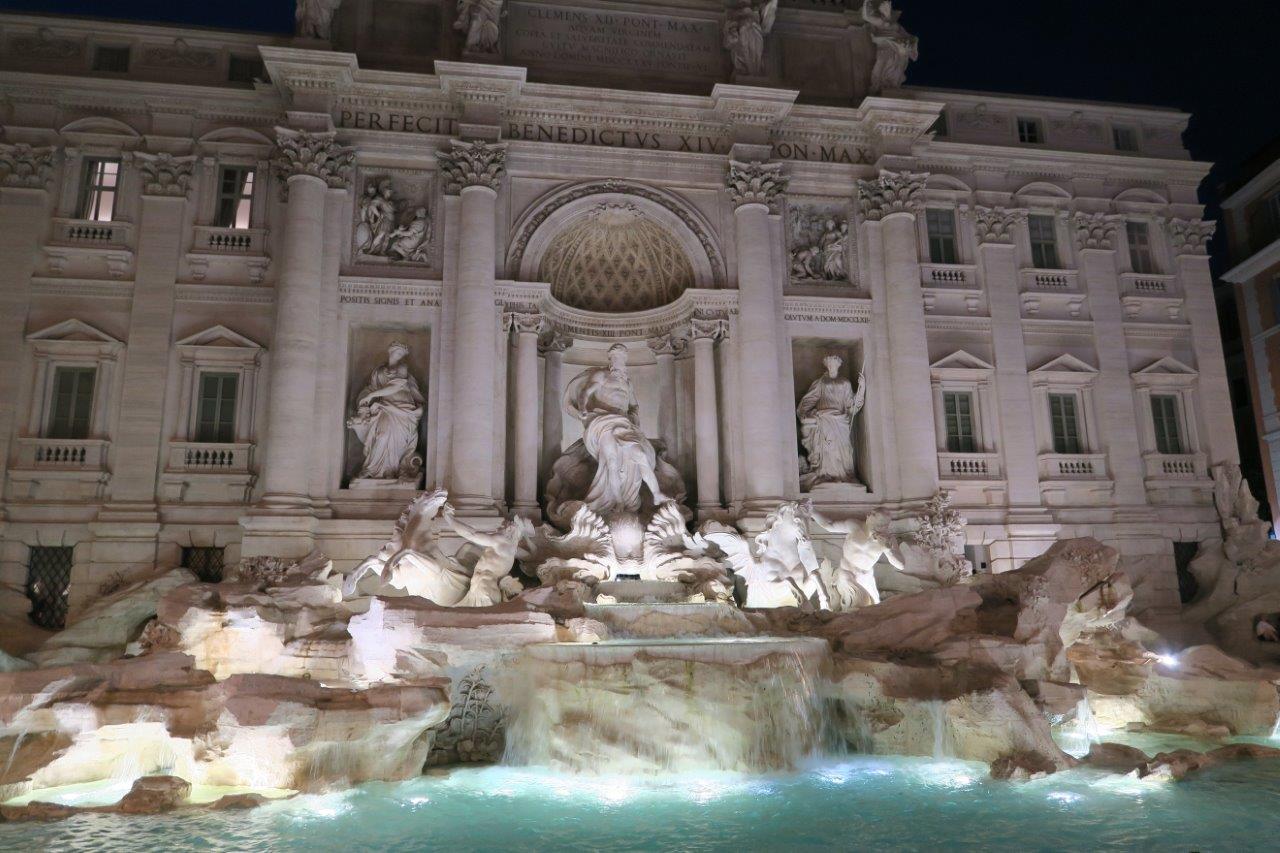 Visiting Rome has been on our bucket list for many years now. It’s been a favorite destination for many of our friends and family, so on our latest trip to Europe, we decided to find out why. Between the amazing architecture, great food, and wonderful Italian culture, we were not disappointed.

Founded in 753 BC, you really can’t beat Rome for a great European vacation if you love being surrounded by ancient architecture. Sure, there are plenty of other cities with much older monuments–Egypt and Turkey quickly come to mind–but Rome has it all. Rome has been the capital of Italy since 1870. We enjoyed our time in this capital city of a safe and modern Western European country, and its great food, friendly locals, and a common currency, all of which made Rome an easy travel destination. Throw in the fact that Vatican City is in the center, and Rome becomes an absolute must-see city to visit. 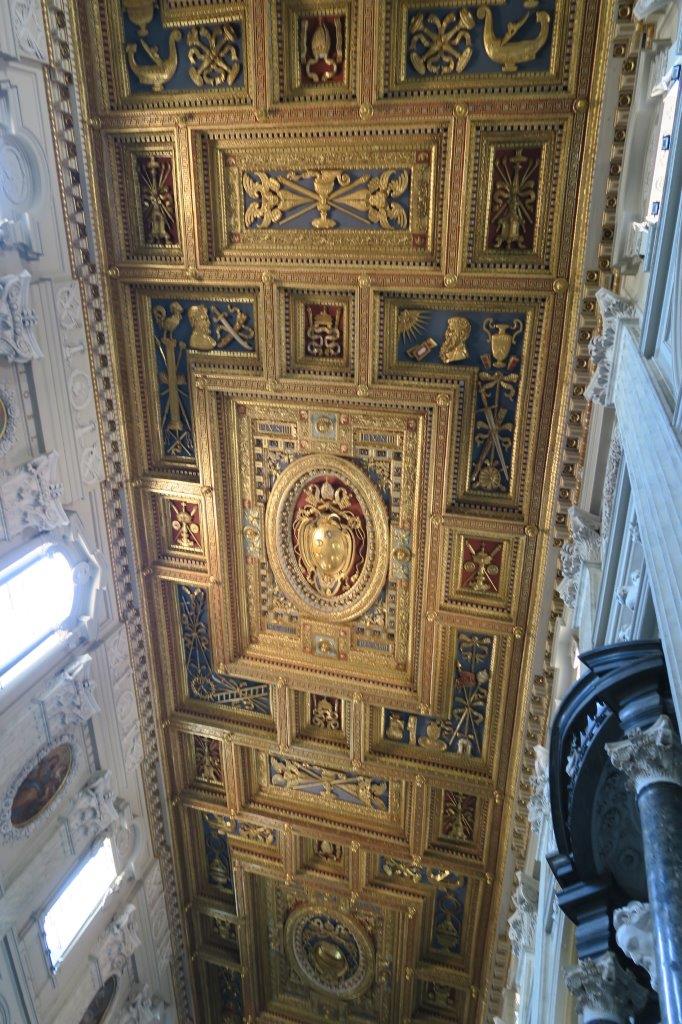 An amazingly detailed ceiling in a Rome basilica.

After visiting northern Italy, I was not sure if I’d like Rome as much, given my first impressions. Rome by comparison is crowded, loud, hectic, with crazy drivers and masses of tourists. But it grew on me over the three days that we stayed there. It is very different from its northern sibling, Milan But with all it has to offer, Rome can be forgiven for its more laid back and dysfunctional lifestyle. We really enjoyed the few days we spent there and would seriously consider going back.

We felt it was important to pick a central local spot to stay so we could walk to most of the attractions. The VRBO we booked was right in the center of the city on Via Capo d’Africa and our favorite eating spot was literally across the street from the Colosseum (circa 70 AD). We would sip our evening cocktails from a sidewalk table as we watched the sun slip behind the ruins of the mammoth Roman amphitheater, chatting and joking with our wait staff  at Gran Caffe Rossi Martini.  It is estimated that over 500,000 people lost their lives and over a million wild animals were killed in battles at the Colosseum. We were so close to the building that you could almost hear the crowd cheering as gladiators fought to the death. 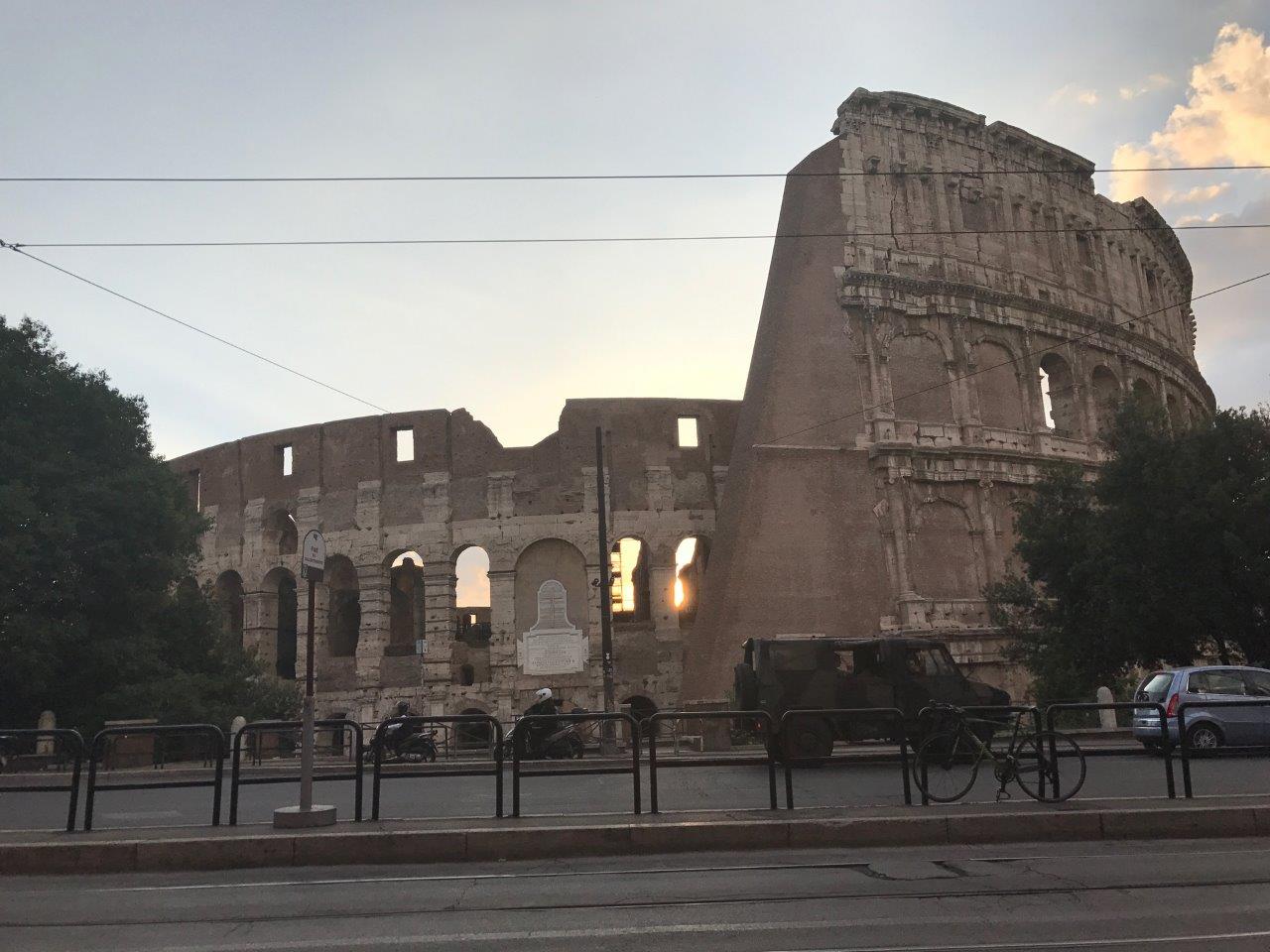 Sun setting behind the Colosseum.

The Food, Of Course

The food in Rome is excellent, as you would expect, and often a bit pricey if you eat in the tourist areas. (Somewhat of a trade-off when you stay close to the major sites.) They like their fritti; fried foods.

The pizza was excellent everywhere we went; olive oil is added to the thin crust, which makes it crunchier. We noticed that locals will often order a medium-sized pizza for one person. You can get excellent cuts of beef, but it tends to be in the higher priced restaurants. If they bring out the beef to show you before they cook it, you’re in a nice place. Pasta carbonara is a local favorite, and the favorite local cocktail, the Aperol spritz, is a must-try. They are also very proud of a thinly sliced ham called culatello, made from the choicest muscle of the pig’s rump. It is an amazingly tender and tasty appetizer. It’s similar to prosciutto, but I thought it was even better. 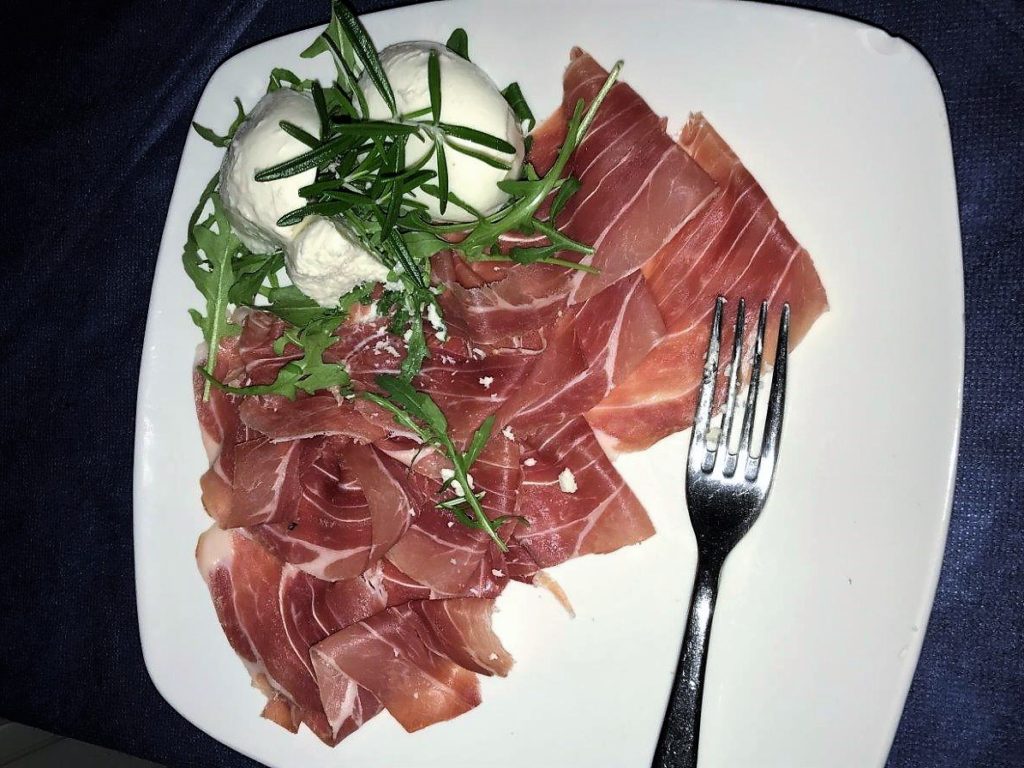 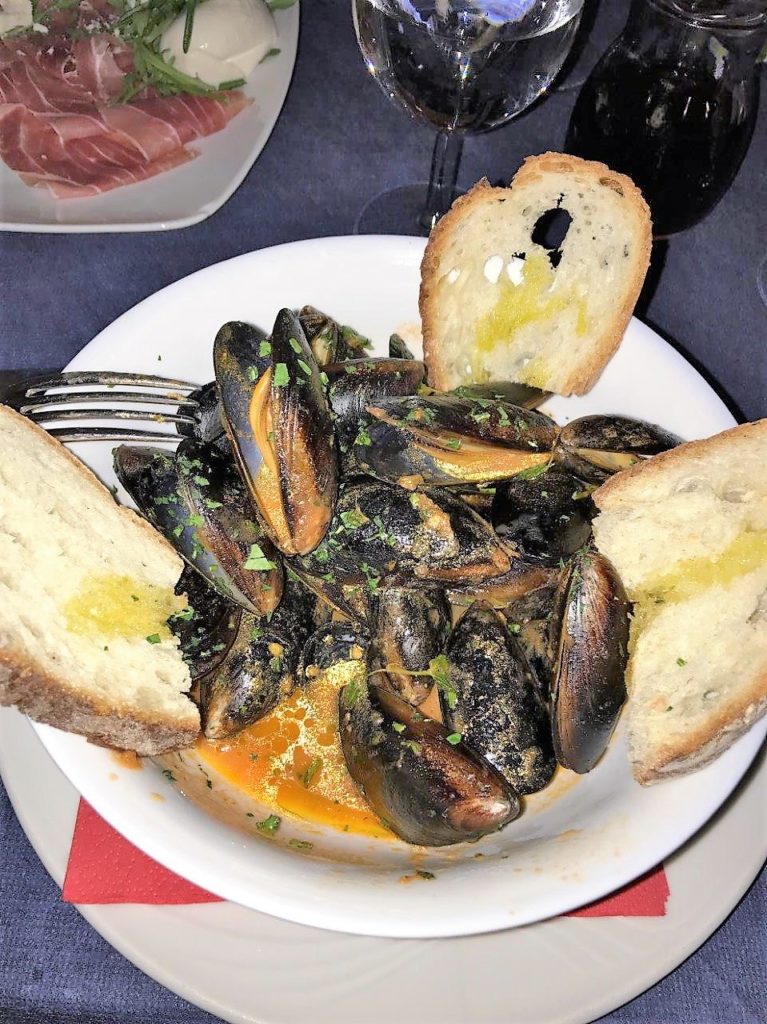 Getting Around the City While Visiting Rome

You will not be able to walk to every attraction, so let’s discuss the various ways to get around the city. I am a big fan of Uber, so my first thought when I need a ride is “We’ll just call Uber.” Well, that does not work so well in Rome. To avoid competition, the local cab industry made sure that only the premium Uber services could be offered in Rome, i.e. Uber Black, which is way more expensive than a cab.

Luckily, there is MyTaxi. MyTaxi is an app that you download to your smartphone to hail participating taxis. There are lots of them around the city so they come quickly and the cost is reasonable. It works a lot like Uber in that you set your location and destination on your smartphone (nice if you don’t speak Italian), and the transaction is cashless, meaning the entire ride and tip is charged directly to the card of your choice (no fumbling with Euros.) 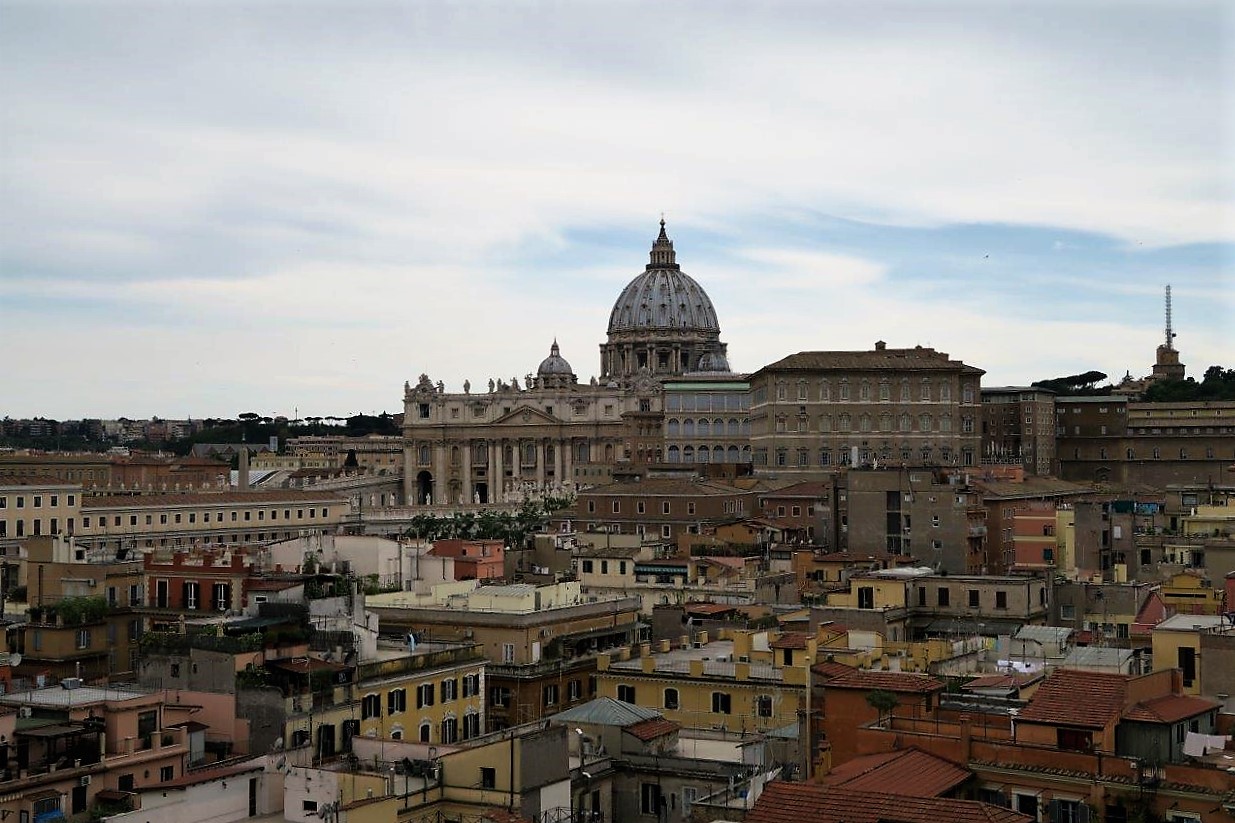 A rooftop view of Rome.

Another transportation option is the Roma Pass. You purchase this online and pick up your physical card at any of a number of stations around the city. We purchased a package called “Omnia Vatican and Roma Pass Including Hop-On Hop-Off Tour” which provides you with two cards. The Roma Pass allows you to ride all of Rome’s public transport for free, plus fast pass entry to attractions such as the Colosseum, plus a hop-on hop-off bus ticket, while the Omnia card provides skip-the-line entry to the Vatican Museums, Sistine Chapel and St Peter’s Basilica.

This package is a real bargain and I highly recommend it. Buy it online before you arrive and be aware that even with the Omnia pass, many attractions still require that you reserve a time slot (easily done online.) Read the instructions that come with the Omnia package. 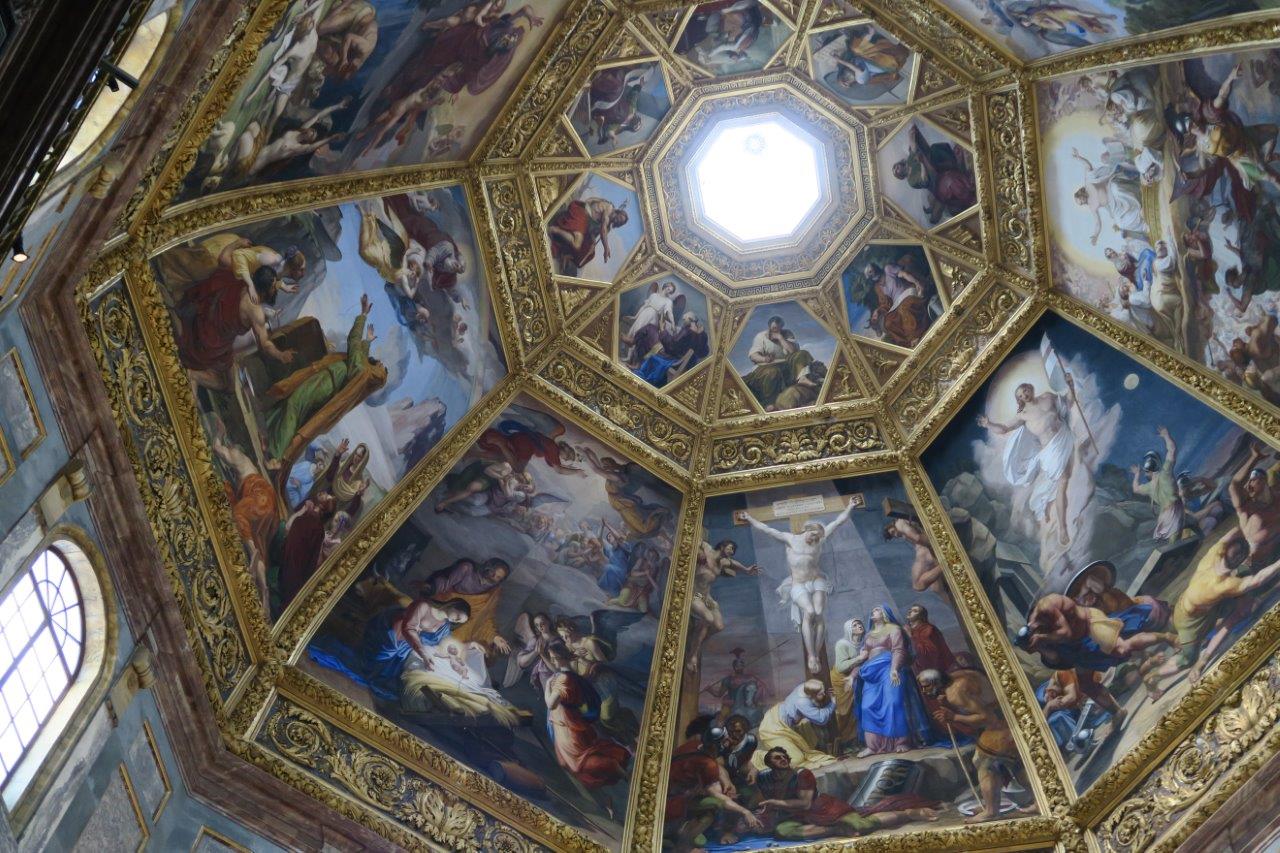 The artwork throughout Rome is truly stunning.

The Basilicas of Rome

The basilicas in Rome are some of the most stunning churches I’ve ever seen, and I’ve seen quite a few. You don’t want to miss Basilica di Santa Maria Maggiore as well as St. Peter’s Basilica in Vatican City, but there are many others that truly take your breath away when you first step in. When you the see the exquisite marble, the meticulous carvings, and the perfect frescoes, you really understand how important and central religion was to people back in the 15th century.

The time it took to create these amazing works of art was inconsequential to the Romans, and perfection was the only goal. An artist might literally dedicate his short life to perhaps one or two creations and never think twice about making that a lifelong commitment if it meant securing a spot in heavenly eternity. 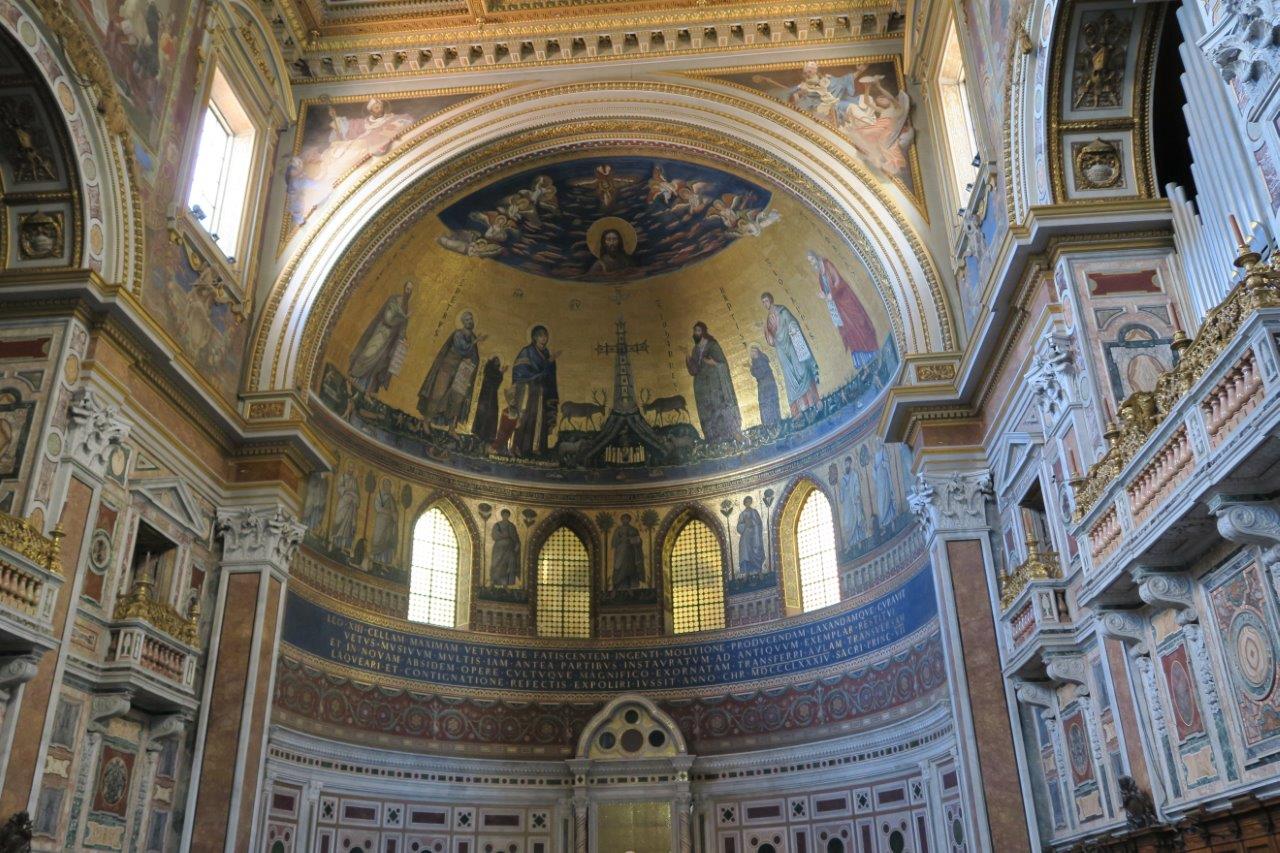 Stunning mosaic gold and mosaic work at a church altar.

Relics are another fascinating sight. Often called “Incorruptibles,” relics are the mortal remains of a saint which are often on display to the public and were a way of attracting church goers (and their donations). The more important the saint was, the more people would come to that church to worship and the wealthier the church became. A church will often have the items displayed in a reliquary, which is usually in the church crypt. The relic can be as small as a finger or an entire body, but they are usually amazingly well-preserved, usually hundreds of years old (their mysterious preservation simply a testament to their saintliness, the faithful will tell you). 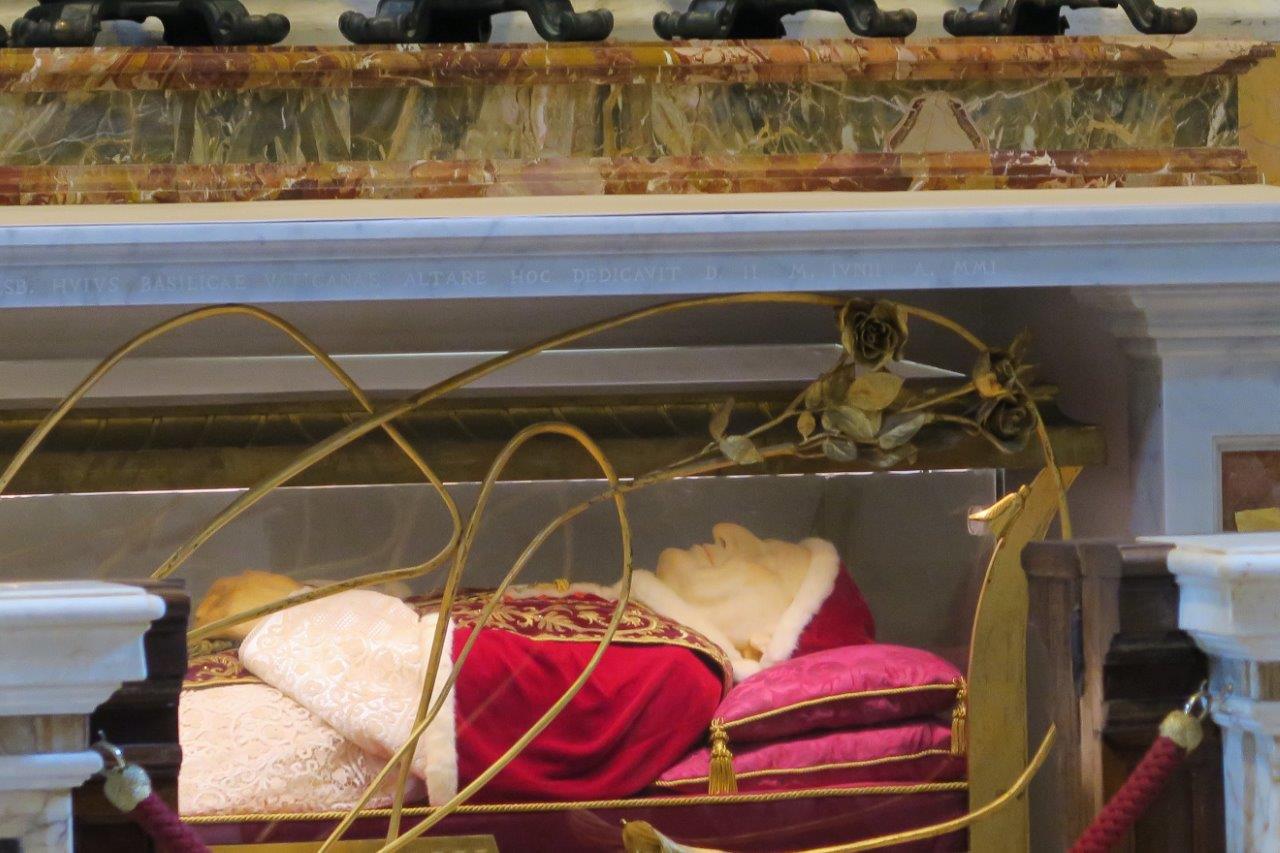 The Vatican Museums were fascinating to see as well. There are walls covered in 16th century tapestries that present baffling optical illusions as you walk past them. We also saw incredibly detailed ceilings that look three-dimensional. Our guide, however, assured us that they were only painted to look that way. We also saw finely detailed map paintings depicted on the walls that so closely resembled the actual landscape that a comparison to Google maps was almost perfect–without the benefit of the technology we have today. The creation of this amazing art 600 years ago is an incredible feat. 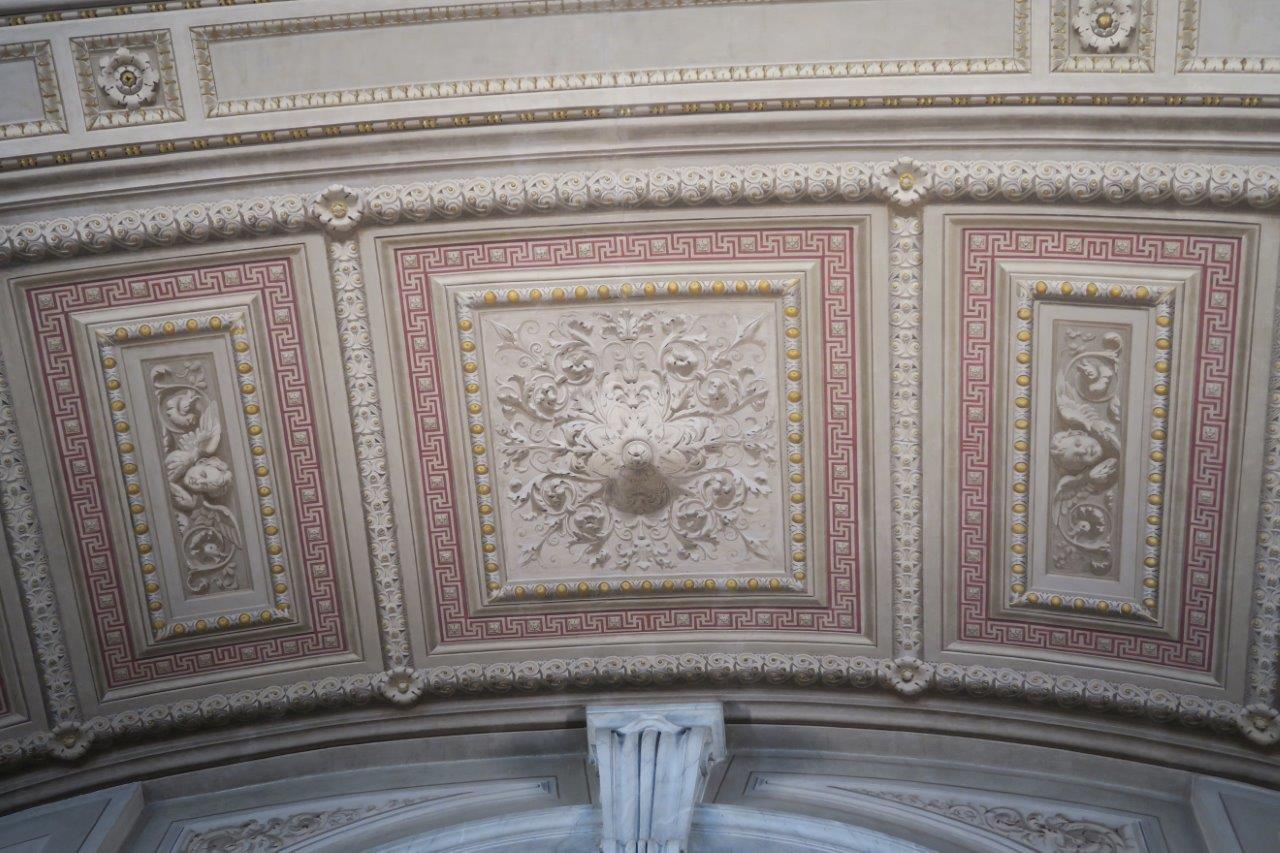 A ceiling that has been painted to appear three-dimensional. 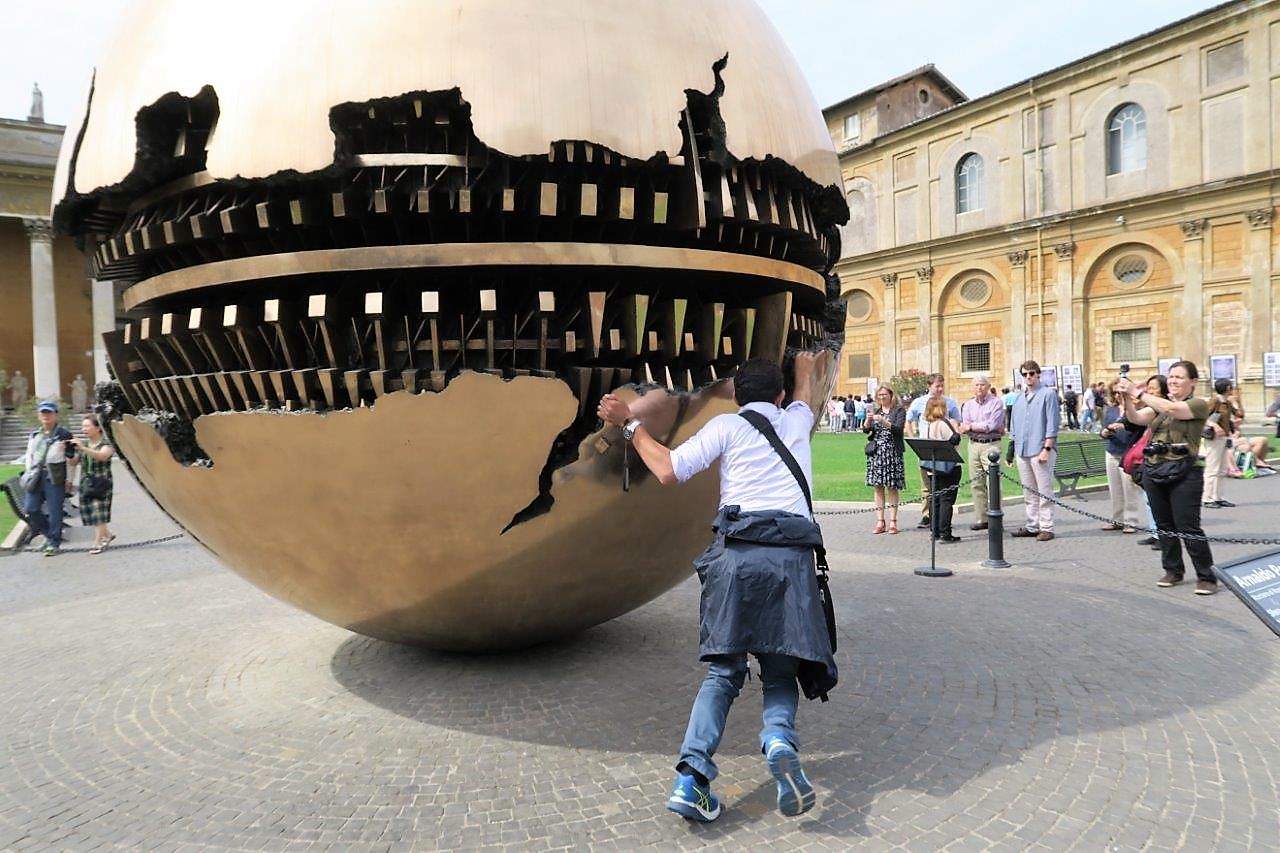 Our guide, Milo, spins the huge fractured sphere sculpture at the Vatican.

These are my top must-see sights in Rome, in no particular order:

The colorful Swiss Guard are the Vatican police.

Visiting Rome with a Guide

When we are visiting a large city for the first time, we always hire a private tour from ToursByLocals. They never let us down. Though a bit more expensive, a private tour is preferable; you can tailor the tour to exactly the kinds of things you like to see. For example, my wife, Mary, likes art and I like medieval architecture. So, we let our tour guide know and he/she tailors the day’s sites with our preferences in mind. The guides, for example, know where to turn on the lights that illuminate the basilica artwork. With large tour groups, you can barely hear the guide and can’t stop to ask questions. With private tours, we leave filled with great information and are thoroughly satisfied. 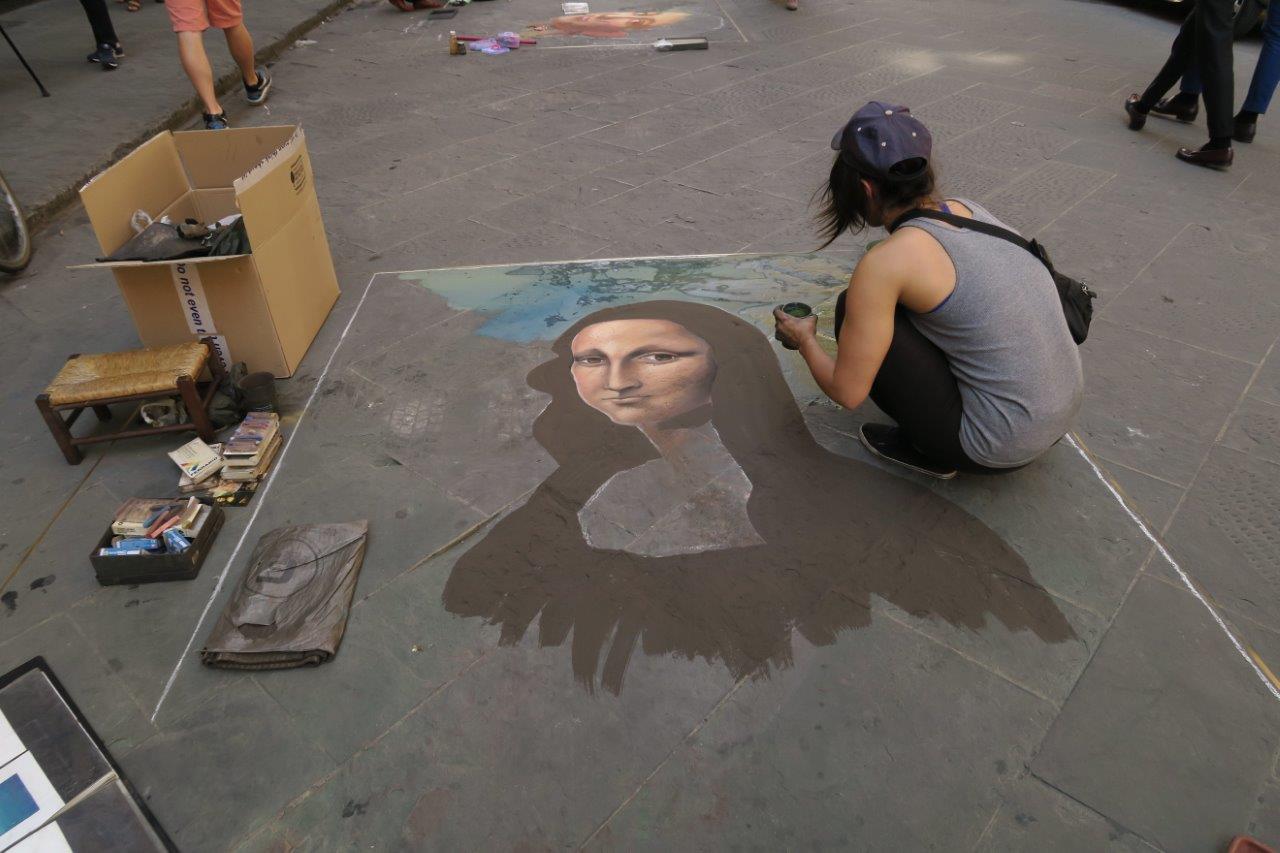 Art is everywhere in Rome.

Our three days visiting Rome were jam packed and we probably saw only about half of the most important sights. Rome has over 280 fountains and 900 churches. There really is more than you can see in one trip, no matter how long you stay. And as often happens when your senses are bombarded with amazing sights, you may get to the point where can’t soak in any more. This is the sign that you should leave and plan come back to see the rest on a future trip. We certainly plan to. 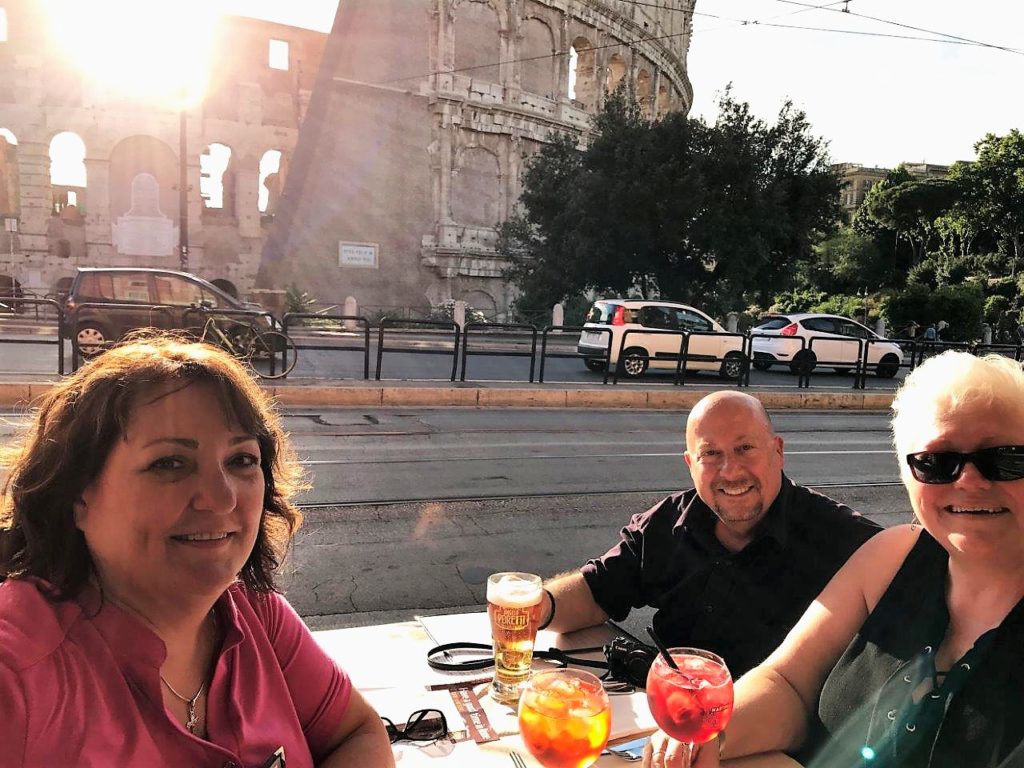 Sun setting behind the Colosseum at our favorite restaurant, Gran Caffe Rossi Martini.

-All photos by Rick Goulian. The cover photo is of the Trevi Fountain at night.

From my two trips to Rome I found I got the most out of the city in company of a guide. Great suggestions!

Thanks Darby, I’m glad it was helpful. Arrivederci!