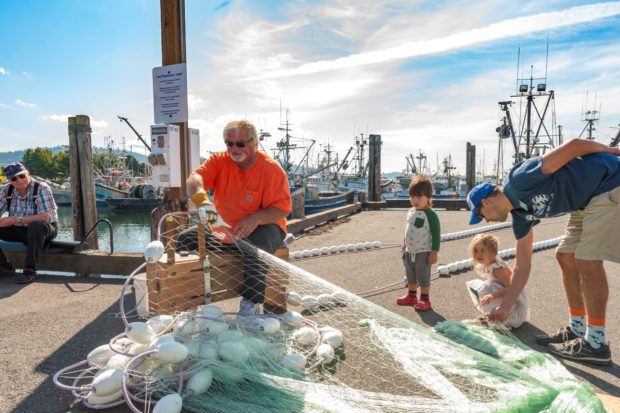 Summer festivals are a highlight of the season—and there’s still time for one more summer adventure. Bellingham, Washington is just a two-hour drive from Seattle and an hour-and-a-half from Vancouver, Canada. (Or fly in directly through Bellingham International Airport.) There’s much to do in this Pacific Northwest city any time of year, and Bellingham SeaFeast is one of the events that makes it special. SeaFeast takes place in this coastal city’s flourishing waterfront and downtown, celebrating its commercial port and fishing industry—and the culinary treat of freshly harvested seafood from the Salish Sea.

As a travel writer, I often get to go behind the scenes and meet the people who make good things happen—businesses, community projects, and events. In Bellingham, a handful of other writers and I met with the organizers of SeaFeast. What’s involved in putting together a festival like this? What makes it a success? I took a tour to see what they’ve planned for this years’ festival and saw how their energy brings good things to their community. 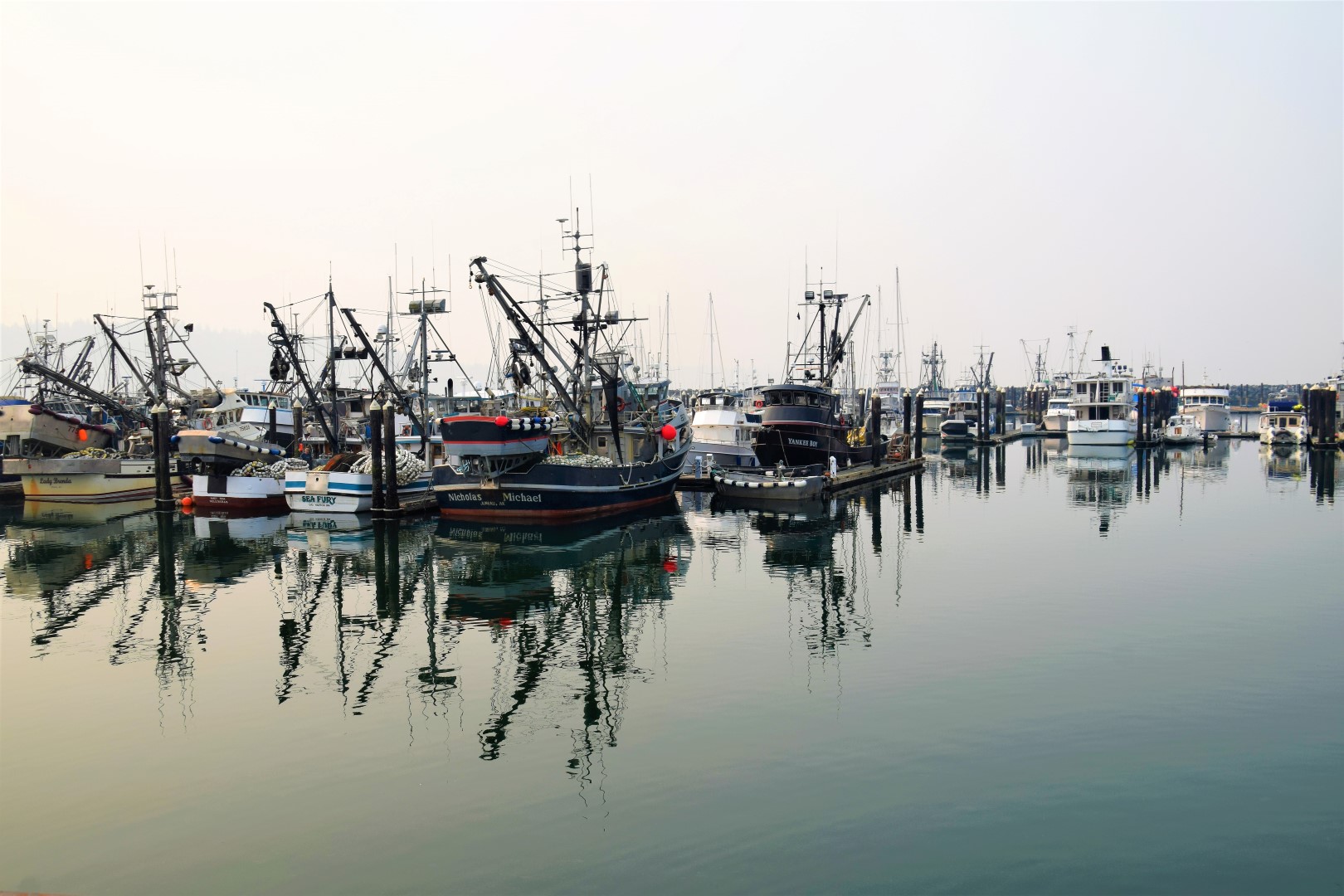 At SeaFeast, spend the day at the Bellingham Bay waterfront (Photo Nancy Zaffaro)

Organizing SeaFeast: It Starts with An Idea

At a breakfast meeting at the lovely waterfront Hotel Bellwether, we met with some of the SeaFeast organizers before touring the festival venues.

Deb Granger is SeaFeast Executive Director and a commercial reefnet salmon fisher with Legoe Bay Fisheries. She told us, “The idea for a festival that celebrates seafood—and the people who work in the industry—had been kicked around. But we honed in on the idea when the city made grant funding available to launch a new city festival. There were more than thirty applicants. We found out we were in the top four, and at that point we really put out the word to the local fisherman and others in the maritime industry for support.”

Once they were awarded the grant, the team zoomed in on what they wanted the festival to be. Deb said, “We don’t want to try to be everything to everyone. As you’re establishing all this, you really have to think long-term and be clear about your focus. We knew we wanted to showcase the maritime community. We’ve gotten more than 65 sponsors and partners. There’s been a lot of cooperation and support from the City and the Port of Bellingham and a lot of people.” 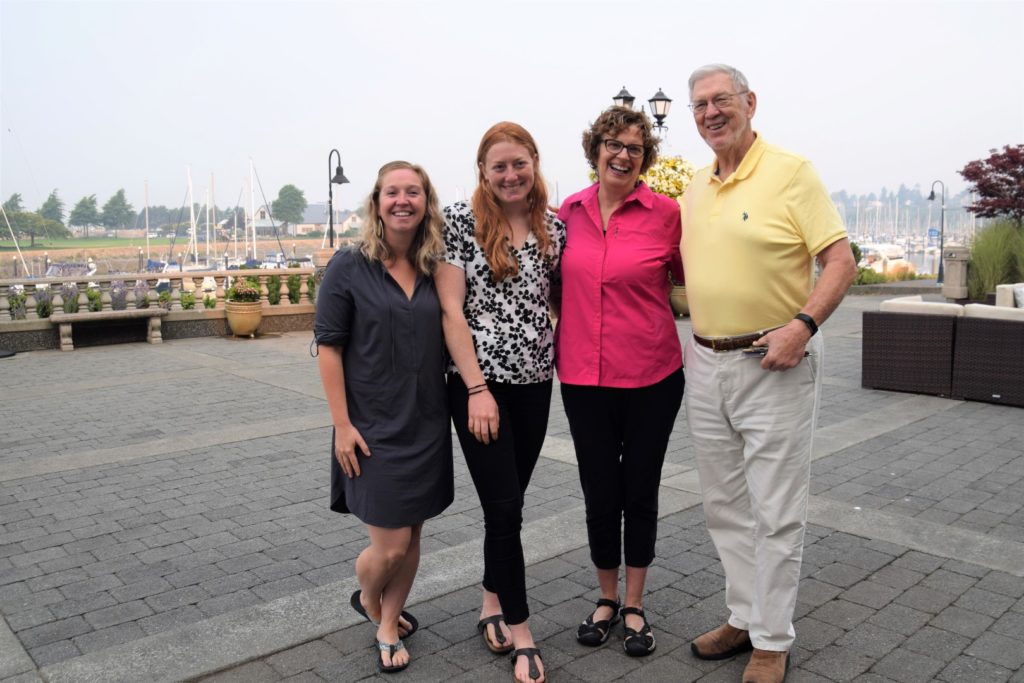 Organizing SeaFeast: Sharing the Harvest and the Maritime Lifestyle

Elma Burnham smiled, “Commercial fishermen are not really salty and scary. We really want to show people that this is where we spend our time. Bellingham has a thriving downtown and we have Fairhaven Historical District. The city is still an epicenter of maritime and sea life. People forget we have the harbor.” Elma is Project Coordinator for SeaFeast. She’s a marketing specialist with a focus on salmon, Alaska and healthy eating, who has also spent seven of the past eight summers as a commercial salmon fisherman in Bristol Bay.

Deb agreed. “We really want to share the fishing lifestyle. People can look at a pile of things or a tarp cover at the harbor or the fish yards and think it’s garbage. But that tarp may be covering ‘garbage’ that’s worth $100,000.” 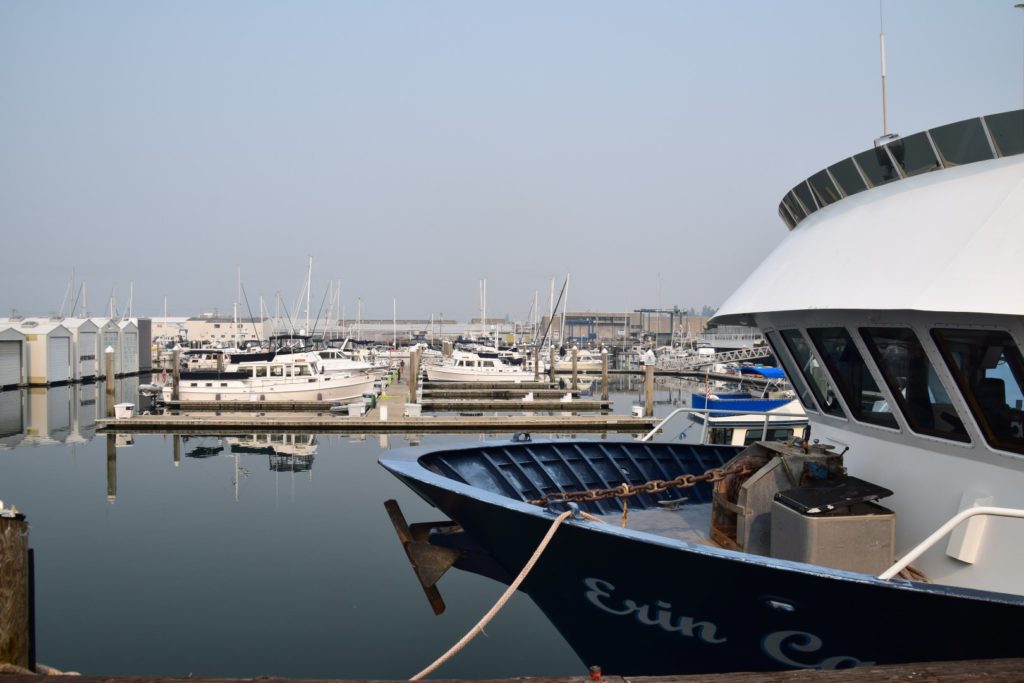 Mike McKenzie is the Marketing Manager for SeaFeast. He added, “We want to showcase the community. There’s definitely great food and entertainment. But the educational, interactive, and hands-on opportunities we’ve got are also a lot of fun. We’ll have over 100 booths of maritime-themed art booths, education and outreach and interactive booths and food booths.”

“We have about a 150 volunteers,” Deb said.  “We try to be thoughtful with everything we do. Only 1% of festival refuse goes to the landfill. That took conscious effort and strong support of Bellingham’s Sanitary Services Company. Most festivals send over 50% of refuse to landfills.” 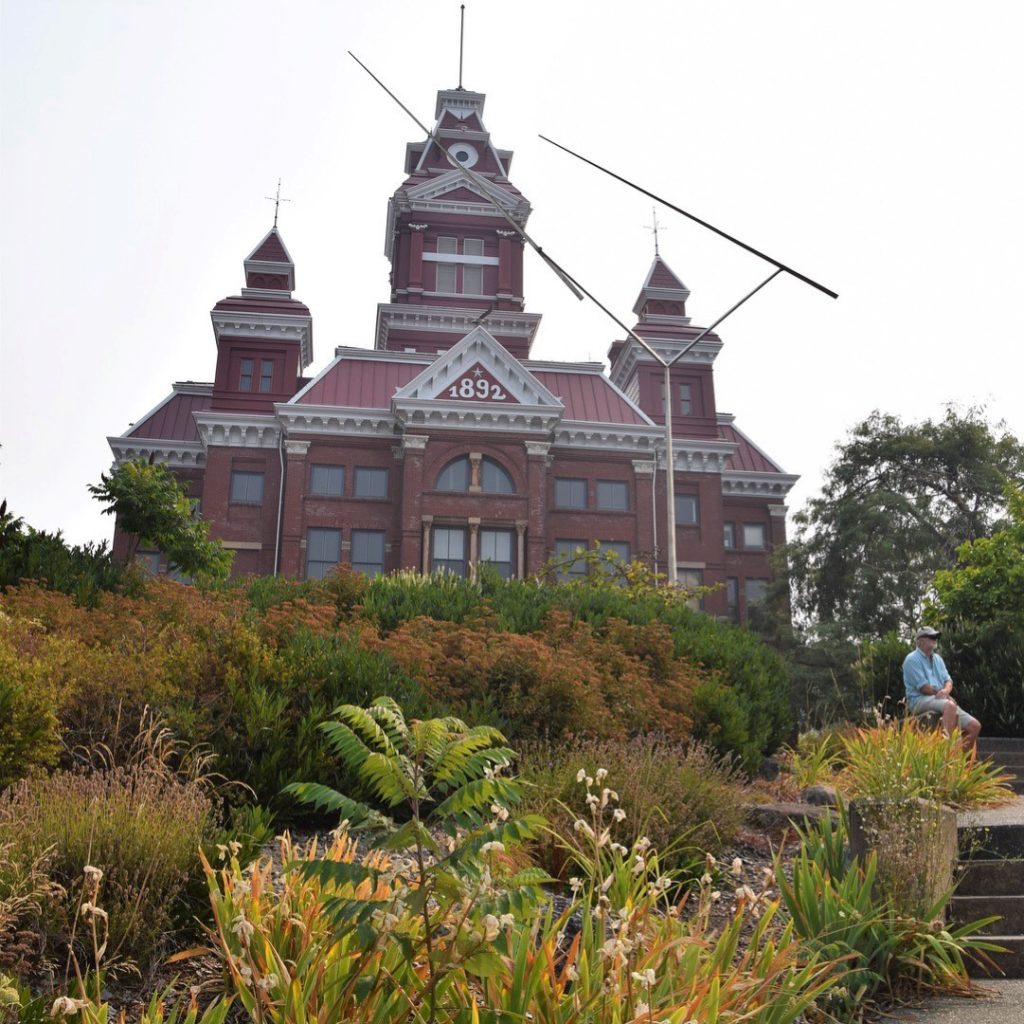 Okay, let’s look at what to expect at SeaFeast. Crab. Salmon. Oysters. Shrimp. Scallops. Oh my! Admit it, food is a major reason we go to these festivals, isn’t it? Arrive hungry! Haggen Northwest Fresh, the local grocery chain, will be at the Squalicum Boathouse with Taste the Sea, a ticketed event at that offers premium seafood bites and wine pairings. SeaFeed at the Harbor is your ticket to a Crab Feed by Bornstein Seafoods. The Big-Top Pavilion also offers open-pit grilled salmon by the Lummi Nation. 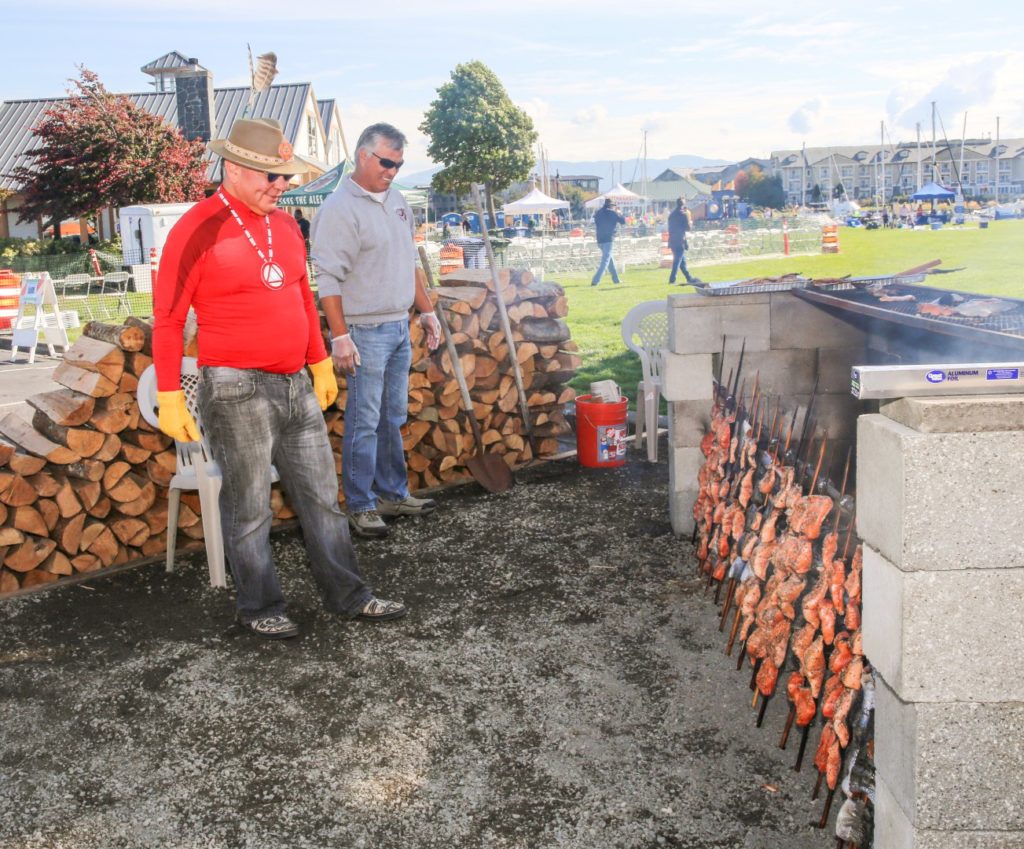 There will be fresh, grilled oysters from Drayton Harbor Oyster Company from nearby Blaine, scallops from Alaskan Weathervane Scallops, Baja Shrimp, and more. There will even be seafood sample booths. For adults, there’s the Beer and Wine Garden with live music. 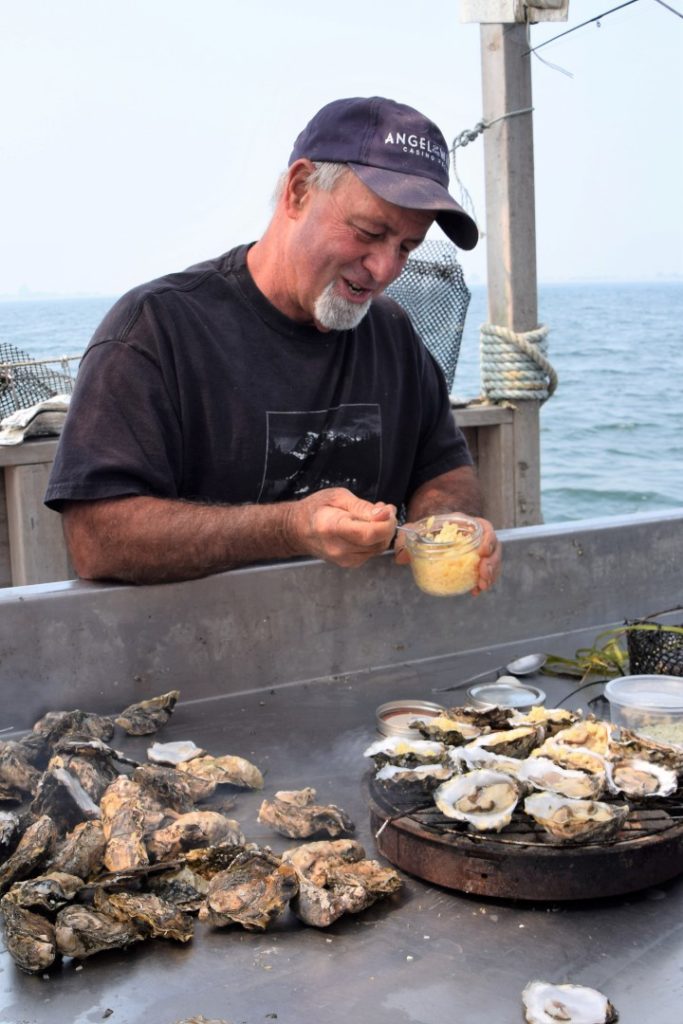 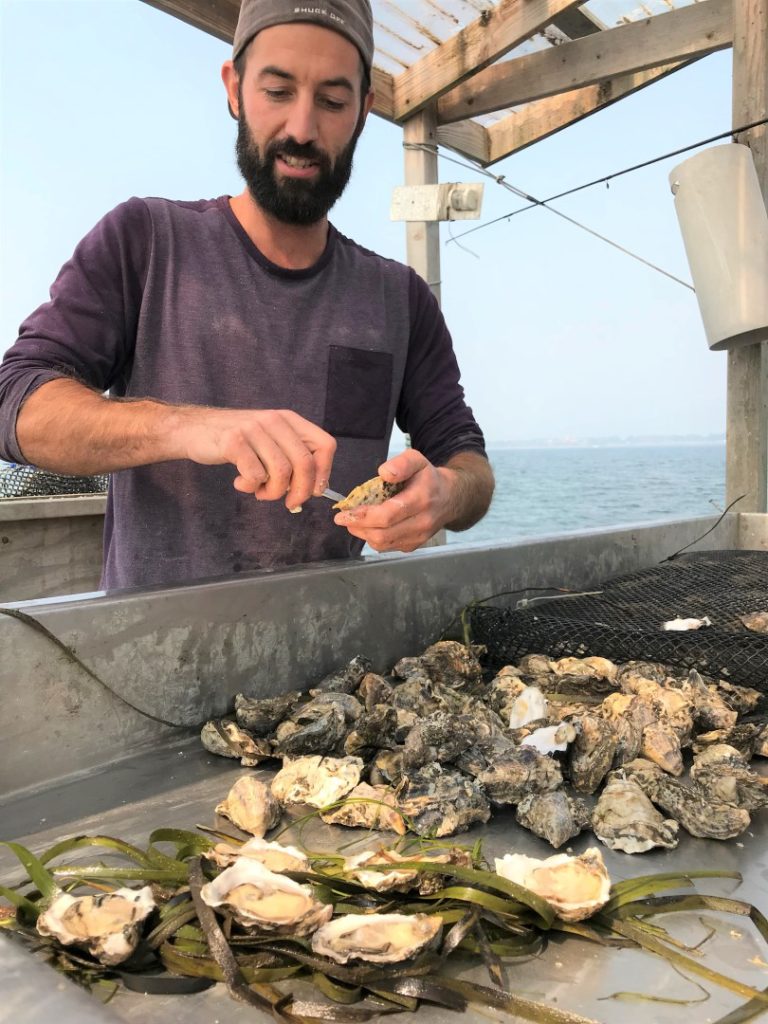 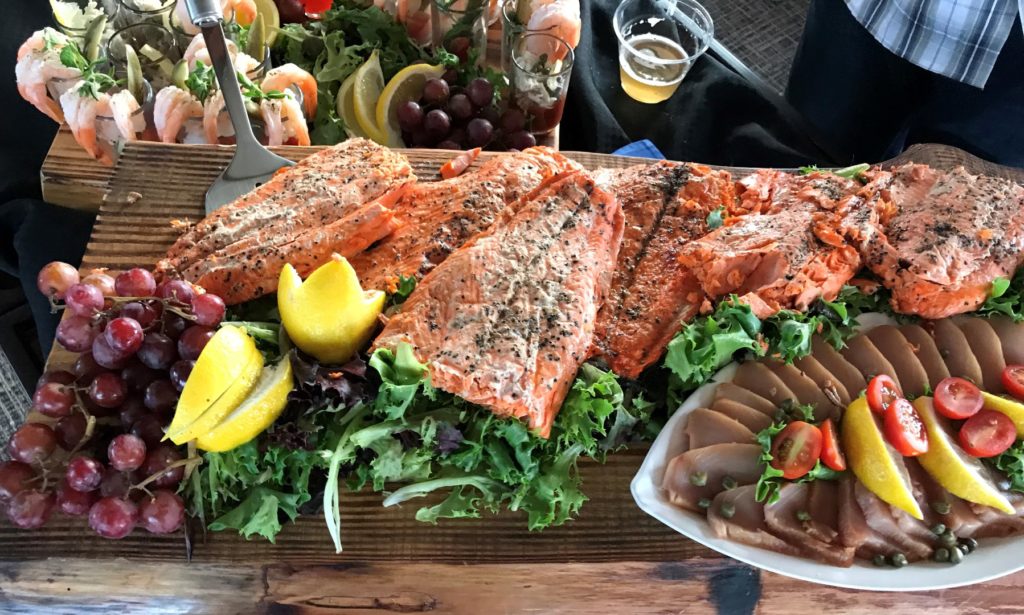 A sea-feast is exactly what you’ll find at the festival. Above, Drayton Harbor Oyster Company’s Steve and Mark Seymour shuck oysters, and more of the local seafood available at SeaFeast. (Photos Nancy Zaffaro)

Bellingham SeaFeast is so-so much more than great seafood. The fest is a great way to get to know the city’s vibrant downtown and waterfront. Events are jam-packed throughout both days. Last year, the annual event attracted more than 10,000 people, doubling the first, previous year’s attendance. The festival is a free to the public. Some of the events are ticketed events for those interested in those experiences. (Purchase tickets events online anytime.) 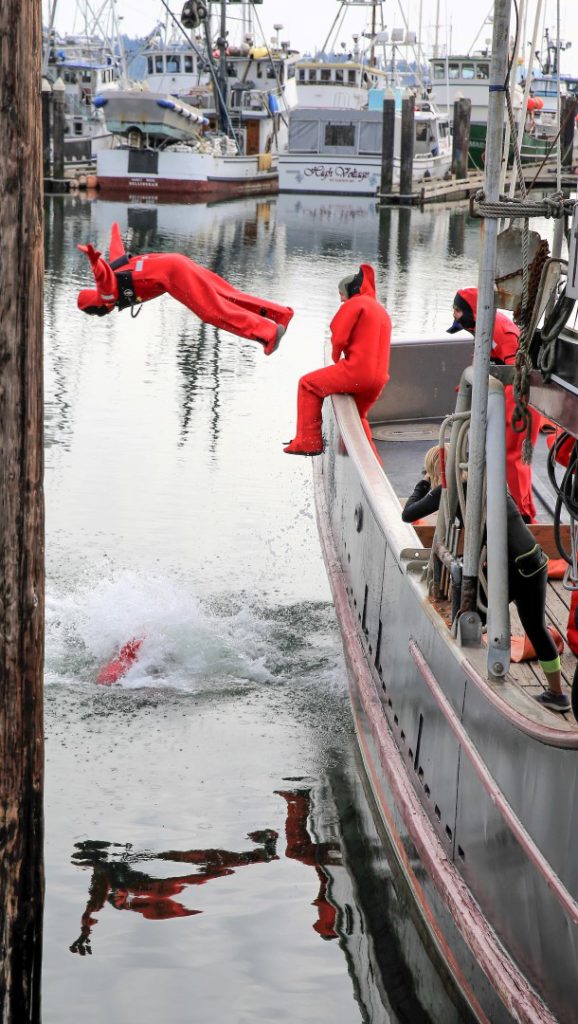 How would you fare in a survival suit race? (Photo courtesy Bellingham SeaFeast, 2017)

The U.S. Coast Guard will do a helicopter drop and rescue. There are water Survival Suit races. Meet Your Fisherman activities offers boat tours and a Guess-the-Fish activity. You can try knot-typing and see how nets are mended. There’s live music, the Lummi Nation Black Hawk Dancers, and other entertainment, and a host of educational and hands-on activities at Zuanich Point Park, Squalicum Harbor, the Squalicum Boathouse and the Bellingham Cruise Terminal. All this is right on the waterfront. 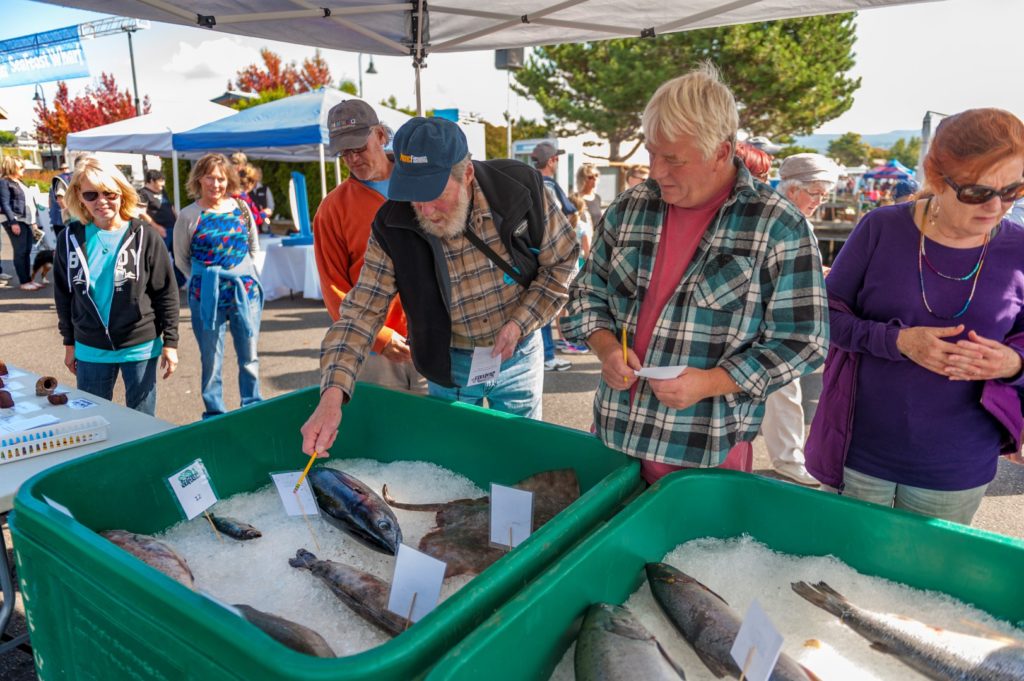 All delicious but can you identify each? (Photo by Ed Lowe, courtesy of Bellingham SeaFeast, 2017)

Ticketed events allow you to take a harbor boat ride that includes tours of Bornstein Seafoods and Bellingham Cold Storage, the largest portside cold storage on the West Coast. Most of Alaska’s seafood and much of the local berries and fruit arrive here before shipping to final destinations. 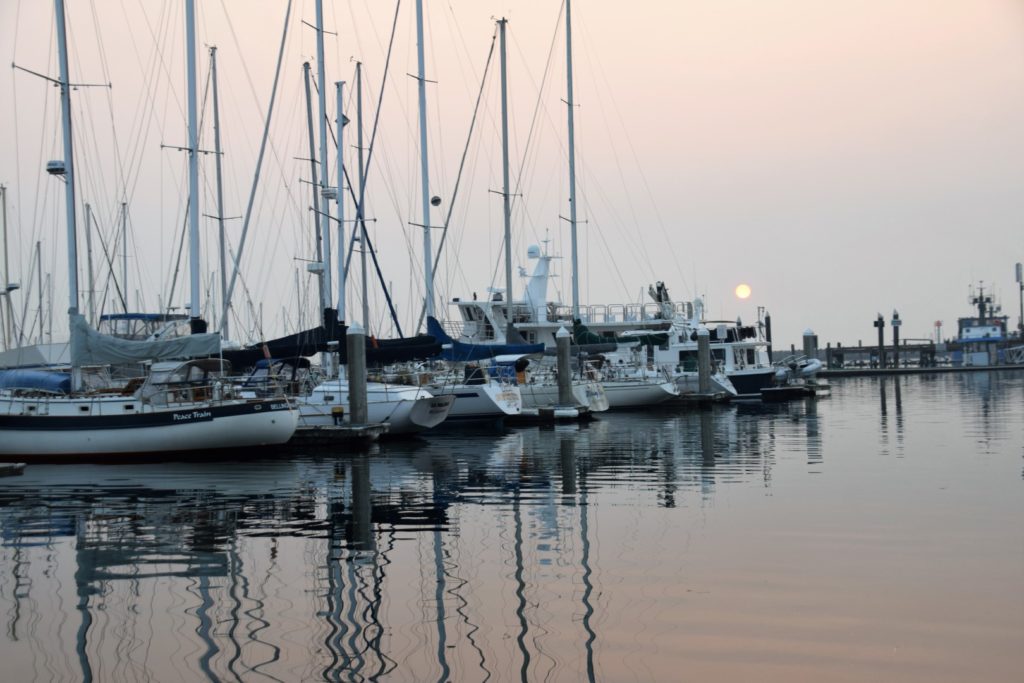 Last year, readings from local FisherPoets were popular. Offerings have been expanded this year with the help of Elma Burnham, who in addition to her many other roles in life, writes poetry about being on the sea and the fishing lifestyle. She and other local FisherPoets will entertain with poems, rhymes, songs, and a video with a maritime focus.

Elma said, “FisherPoets events started in Astoria 23 years ago and they gave their blessing to keep that interpretation to have an event here. We’ll have local performers. We made a movie. We really want to make this welcoming. To give people a glimpse into what we do and share our lives as fisherman, and our culture.”

Go all out with a VIP SeaFeast Cruise, another ticketed event that gets you out on the water with San Juan Cruises, ticketed entry to SeaFeed at the Harbor, a crab dinner, and a button for the Fisher Poet reading event. 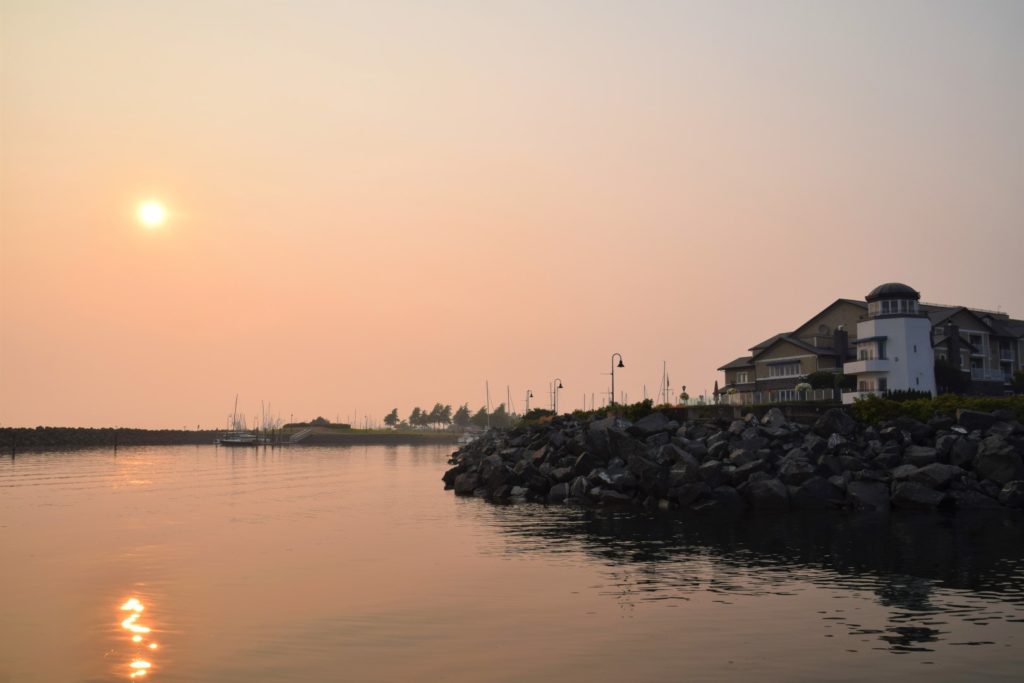 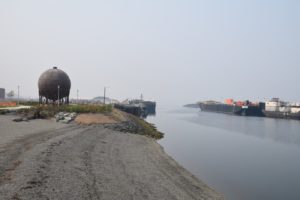 Deb Granger told us, “This year, the Lummi Nation families will arrive by traditional canoes at Waypoint Park. There are 11 people in each canoe. These canoes are very important to them, and they consider their canoes to be part of their families. So it’s very special that they will share the canoes with us. Later, storyteller and violinist Swil Kanim will be on hand to share stories.” 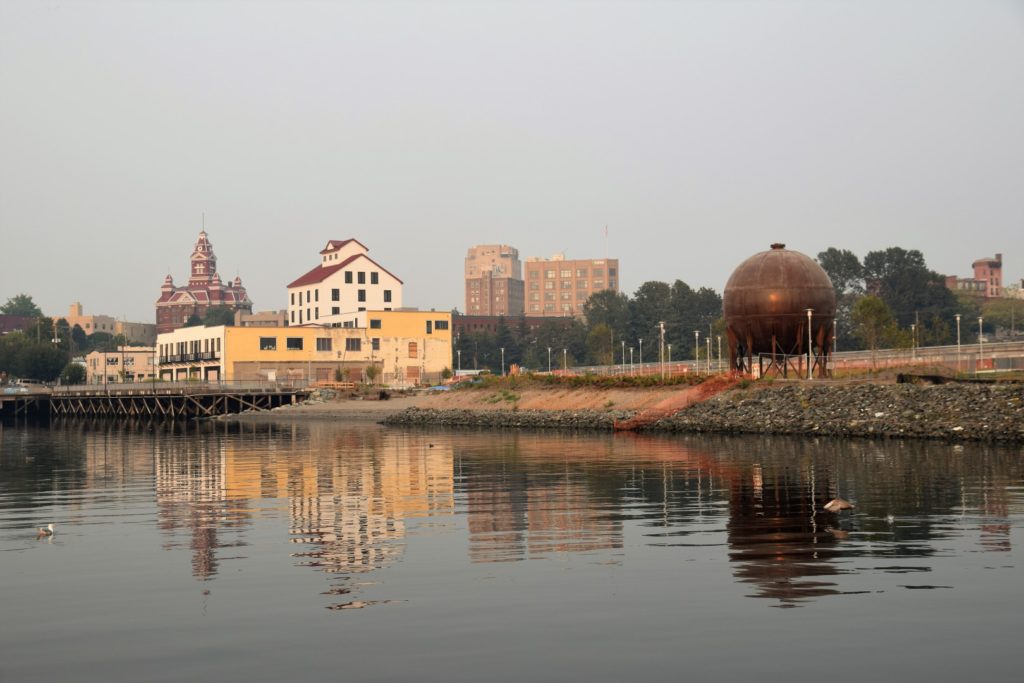 “I’m really happy about the paddle opportunities this year,” Liz Purdy, the Festival Associate Director says. “We’ll have an introductory Paddle Adventure course. We want to show people that our harbor front is not just industry. It’s also very much offers recreational opportunities. We’ve got six different entities involved and 80 people will be able to rotate the event and do a circuit around the harbor. This event is free, but people need to pre-register online and space is limited.”

The “movers and shakers” of Bellingham SeaFeast put their heart and soul into this festival endeavor—and Bellingham and Whatcom County and the many out-of-town attendees benefit. In May, Bellingham hosts an annual Sea to Ski Festival that kicks off the summer season. Bellingham SeaFeast ends the season. To me, festivals like these are a big part of what makes a place special. And if summer has to end, let it go out with a splash. 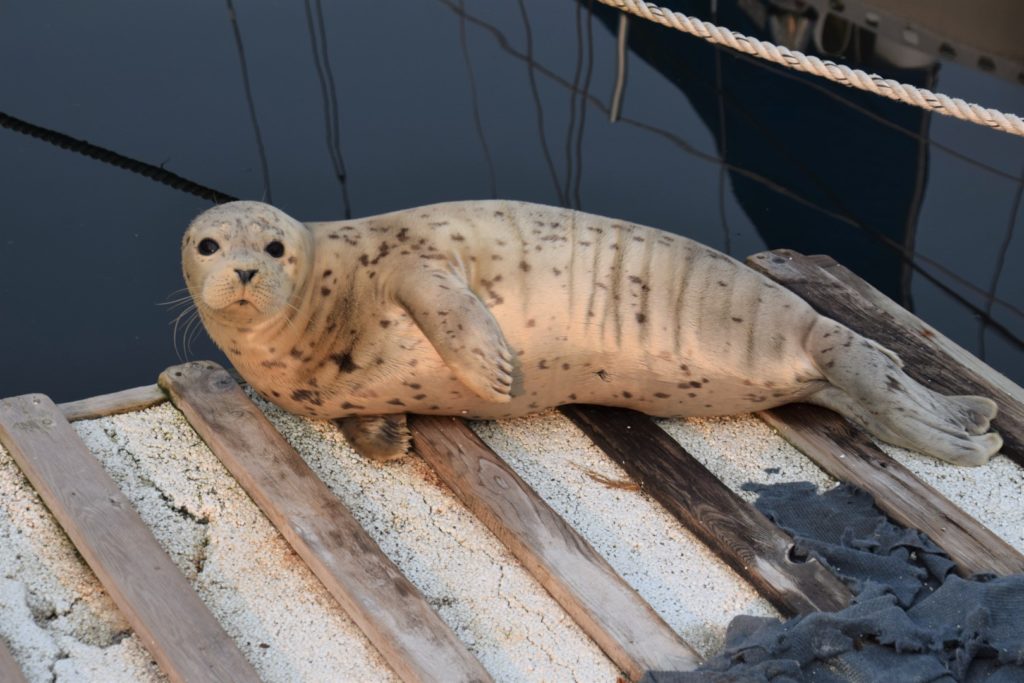 This little guy might even make an appearance, as he did on our harbor cruise (Photo Nancy Zaffaro)

Bellingham SeaFeast 2018 is celebrating its third year, and this year will indeed be bigger and better than ever.

Where to Stay, Where to Eat:

Wonderful catch-up lunch with @soulful_sojourns at

1. Gather three friends at my house. 2. Snack on s

Music to my ears! . . . #columbiarivergorge #colu

And I worked up an appetite, so … Suki Ramen at

In the early morning, the sky was still overcast a

Said I would and I did … fabulous afternoon wine