The Raw Beauty of Western China 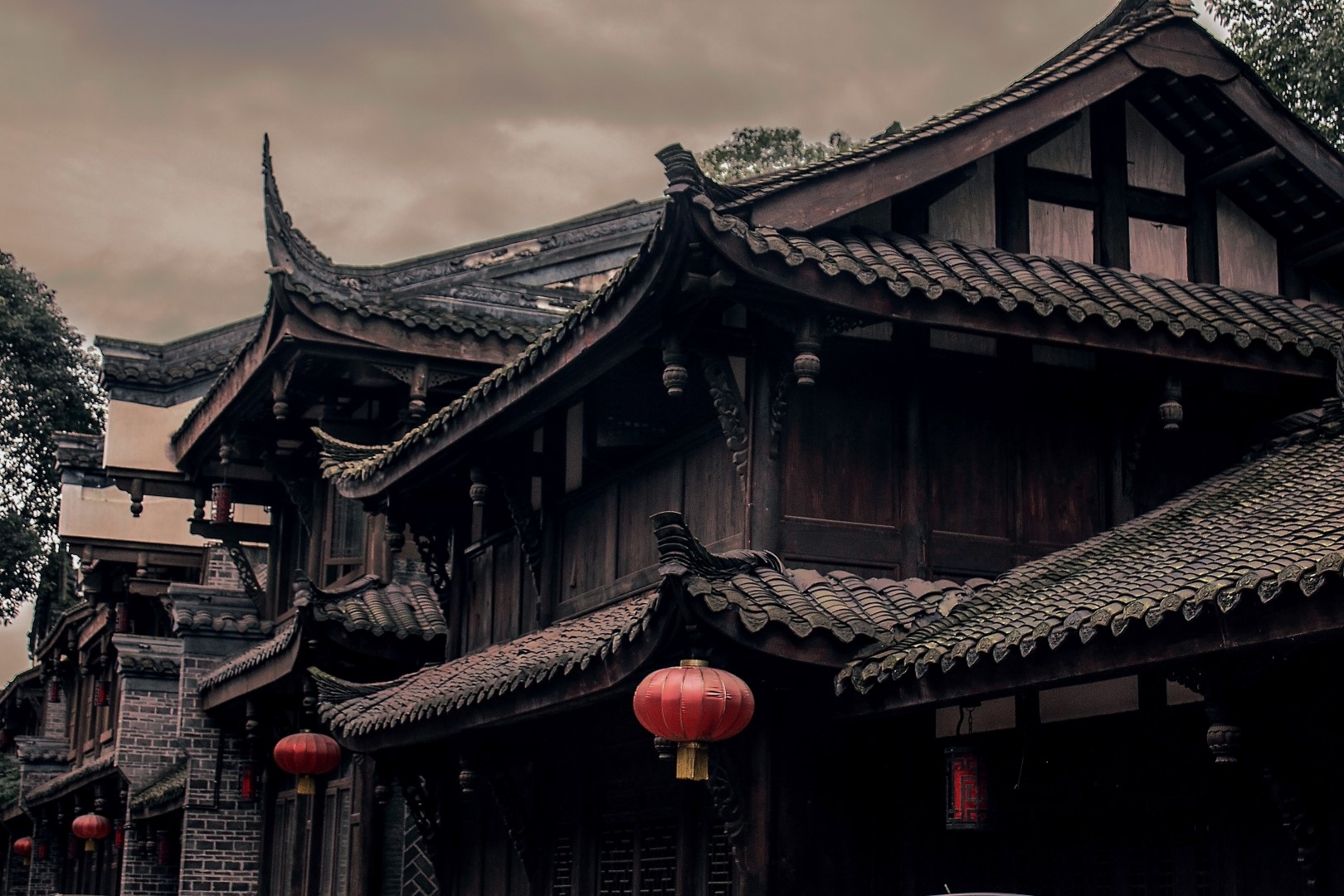 Consisting of one municipality, six provinces and three autonomous regions, Western China is as rich in history, culture and raw natural beauty as it is vast. No matter which region you visit, there is something remarkable to behold.

A vast complex of shrines and temples on Ming Mountain, this site is devoted to the afterlife and the Buddhist and Chinese mythical concepts of the underworld and hell. Dubbed the Ghost City during the Eastern Han dynasty, Fengdu is believed to be the place of judgment before a soul entered the underworld. This is seen in numerous statues and murals depicting souls undergoing trials and punishment. One interesting spot is the Home Viewing Pavilion, the site believed to offer the departed one last look at home before crossing over.

A karst landscape, one formed by dissolution or erosion of soluble rocks creating ridges, towers, sinkholes and other rock formations, Wulong is a park of rugged natural beauty. Notable sites include Furong Cave and three natural limestone bridges—the Tianlong, Qinglong and Heilong—spanning the Yangshuihe Gorge hundreds of feet in the air. Although stone, the bridges do support vibrant green trees and vegetation watered by natural springs. Other places of interest in the park are Fairy Mountain and the Longshuixia Gap. 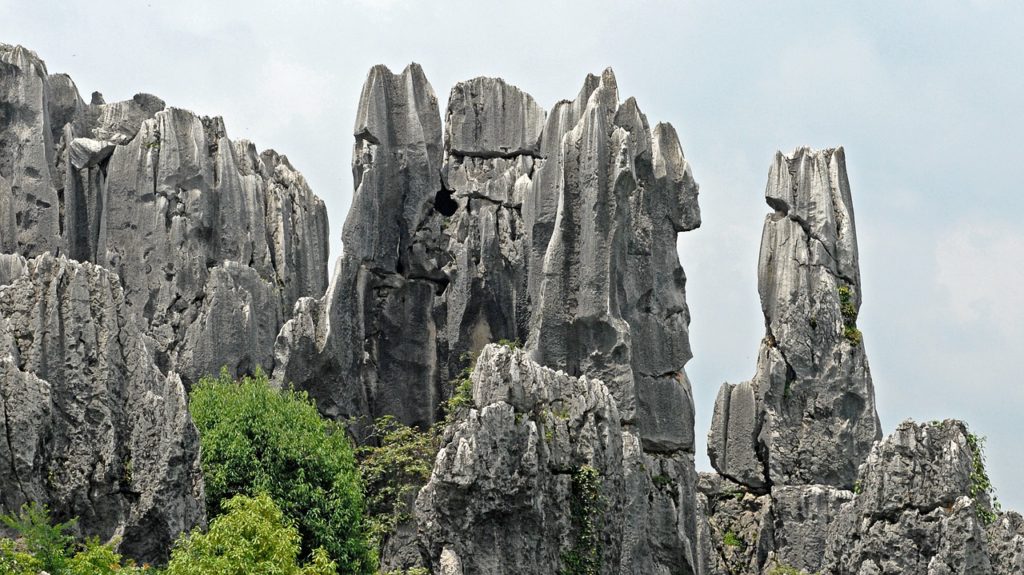 An ancient Chinese stronghold atop the Diaoyu Mountains in the Hechuan District of Chongqing, Diaoyu is famous as a site of successful resistance of the Mongol Empire during the last half of the Song dynasty. Although small, the fortress repelled the Mongols in numerous battles over 36 years, one of which claiming the life of the Great Khan Mongke in 1259. It is also called the Fishing City or Fishing Town due to a mythical tale in which a Titan sat on the site to fish during a great flood, saving and feeding those fleeing the rising waters. Scenic spots include the Huguo Gate, Zhongyi Hall, Huguo Temple and Thin Knife Ridge.

Located in Huayin City, Mount Hua, also called Huashan, is the westernmost of the Five Great Mountains of China. On the eastern end of the Qin Mountains, Hua possess five main peaks and includes the death-defying Huashan Plank Walk, a combination of both hiking and rock climbing in which visitors traverse narrow planks of wood attached the rock face hundreds of feet in the air. There are also several temples and cable cars for ascending the peaks.

The Buddhist Grottos and Cave Complexes

Throughout Gansu province, there are numerous temple grottos and cave complexes carved into the rock to explore.

Bingling Temple is a cave complex in Lanzhou carved into the face of a canyon wall. Home to the Maitreya Buddha, a colossal sculpture of the Buddha in situ, standing nearly 100 feet tall.

Mogao Caves (Caves of the Thousand Buddhas) is a huge complex of 492 temples southeast of Dunhuang along the famed “Silk Road.” This is also the site of the famed “Library Cave,” in which a cache of ancient documents were discovered in 1900.

Maijishan Grottos consists of 194 caves cut into the face of the hill of Majishan in Tianshui.

Mount Emei and the Giant Buddha of Leshan

One of the four Sacred Buddhist Mountains of China, Mount Emei is the birthplace of Buddhism in China, as it is the location of the first Buddhist temple constructed in China in the 1st century CE. There are 76 monasteries of the Ming and Qing periods on the mountain’s top. Carved into the hillside in the 8th century, the Giant Buddha of Leshan is the largest Buddha in the world. The statue stand an astounding 71 meters (233 feet), more than twice the height of the Christ the Redeemer mountaintop statue in Rio de Janeiro.

A landscape of alpine mountains, coniferous forest, karst formations and limestone terraces and caves, Jiuzhaigou Valley is truly a location of natural beauty. Most spectacular are the unusually-colored lakes, pools and waterfalls throughout the valley, ranging in color from greens and blues to even purples. 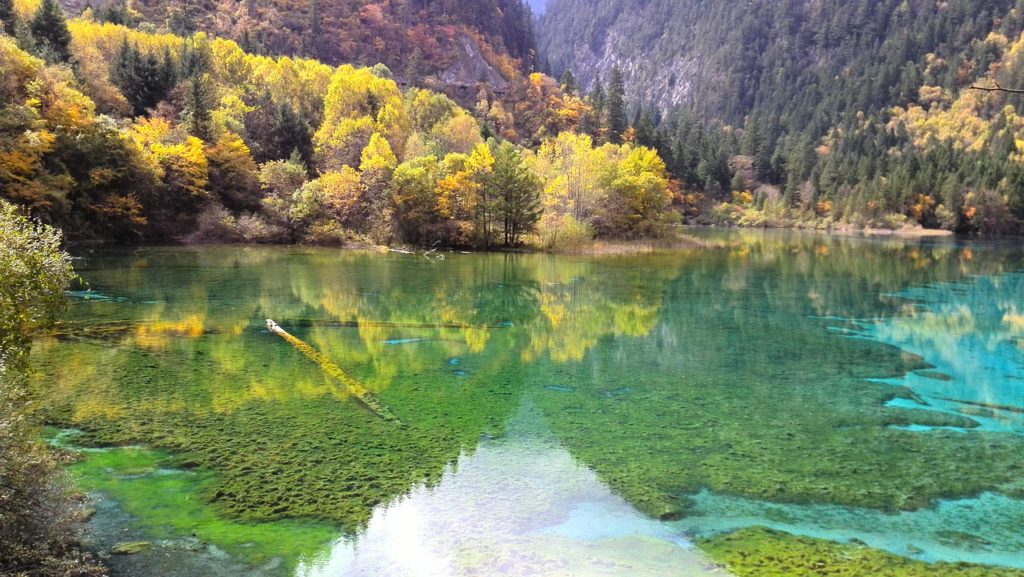 A series of limestone karst outcroppings east of Kunming, the capital of Yunnan province, the Stone Forest features gnarled pillars of stone, resembling petrified trees. Certain rock formations have been giving names by the locals, such as “Camel on Elephant” and “Seven Elders Gathering”. Other notable sites include Zhiyun Cave, Qifeng Cave and Long Lake. 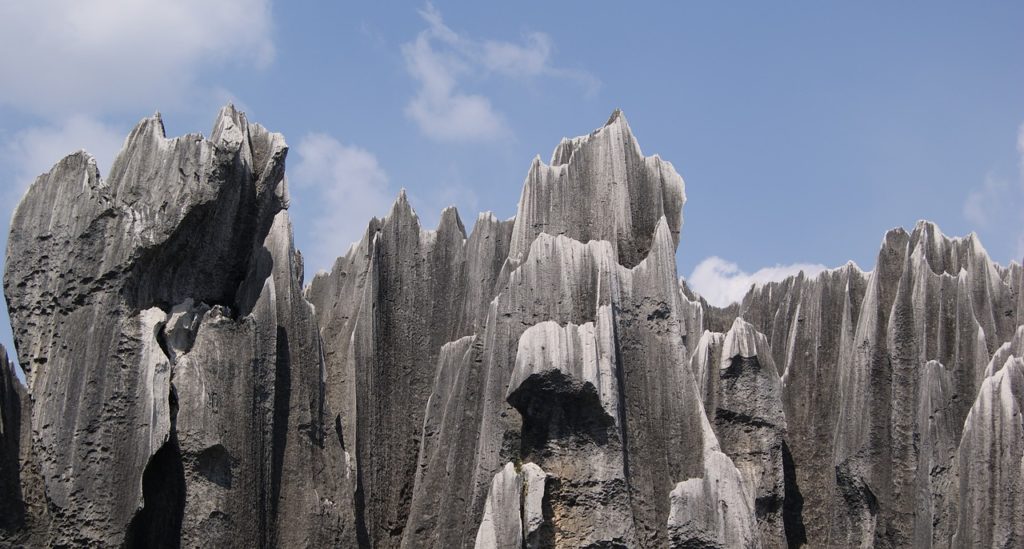 Located on the Baishui River, Huangguoshu Waterfall National Park boasts a family of eighteen waterfalls, the grandest of which is the stunning Huangguoshu waterfall. It has the distinction of being viewable from all angles, including from within via the accessible Water-Curtain Cave. 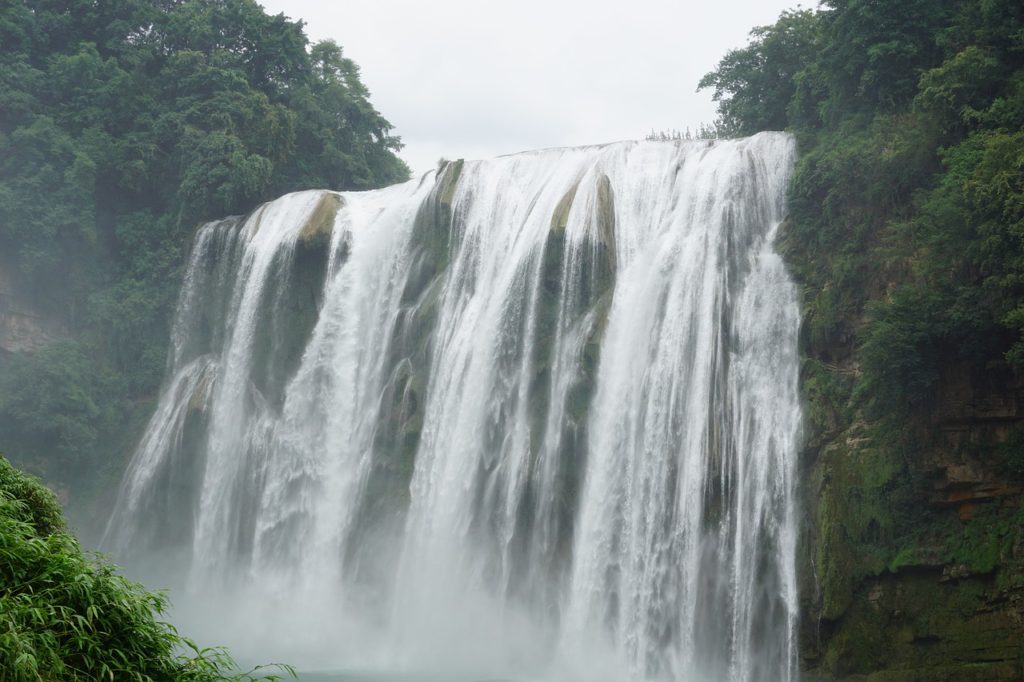 The largest lake in China, Qinghai is an inland saltwater lake located atop the Tibetan Plateau surrounded by mountains and lush grasslands. It boasts three islands open to visitors. Birdwatchers will especially enjoy Niaodao, Bird Island, as it hosts thousands of migratory species each summer. 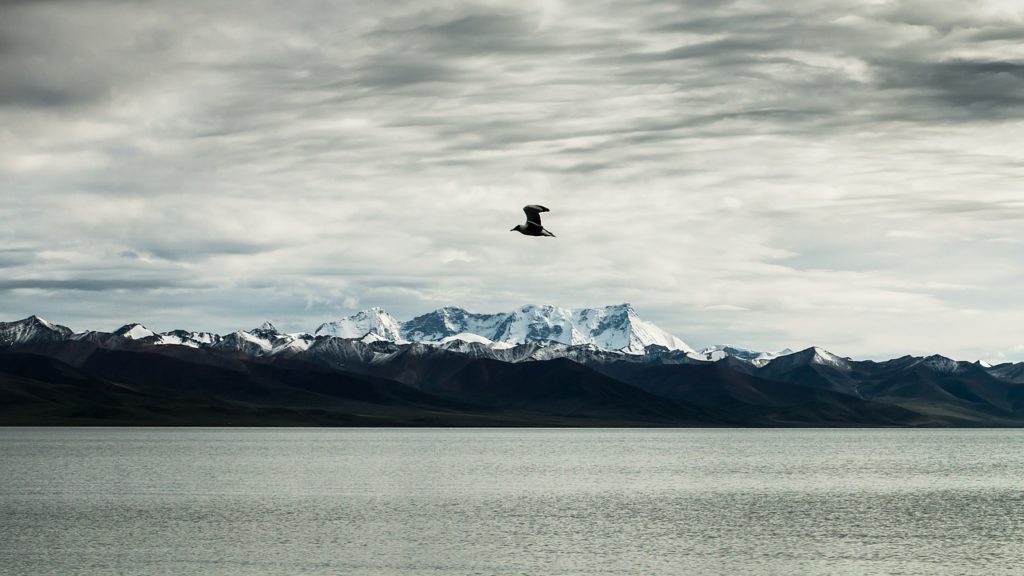 A UNESCO World Heritage Site, the Potala Palace in Lhasa is the former home of the Dalai Lama until 1959, when the 14th Dalai Lama fled to India during the Tibetan uprising. Comprised of the Red Palace and White Palace, Potala sits upon Red Mountain in the center of the Lhasa Valley. Nearby stands the Jokhang Temple Monastery, considered to be the spiritual heart of Lhasa. It was founded in 652, during the reign of King Songsten Gampo—first king of a unified Tibet—for his two brides, one of the Chinese Tang Dynasty and the other of Nepal. 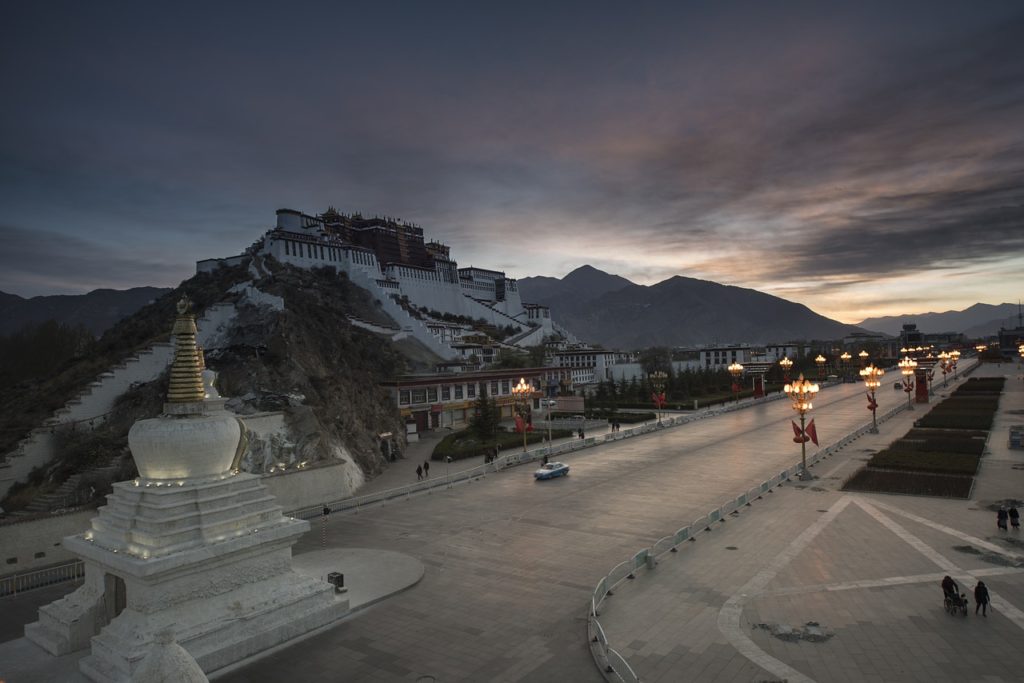 A branch of the Tianshan Mountains, these unique mountains north of Turpan in the Xinjiang Region is the hottest location in China, giving it its name. Although barren of vegetation the mountains still offer stunning red sand and rock vistas. Visitors can tour the mountains or explore the Flaming Mountain Geographic Culture Museum.

One Hundred and Eight Stupas

Originally built as part of a temple complex during the Western Xia, an empire that existed from the 11th century to the 13th, this collection of Buddhist stupas sits on the Yellow River at Qingtongxia. The stupas are hemispheric relic chambers used for prayer and meditation. Also called dagobas, the stupas consist of twelve tapered rows forming a triangle on the hillside.

China is a vast country and is so much more than the Great Wall of China, the Terra Cotta Army in Xian, or its populous cities. Western China offers incredible natural beauty, as well as historical, cultural and religious sites.

Ella Kim, Content Manager for Trekbible.com, is a writer and content specialist with a predilection for learning and exploring new places and cultures around the world. With family scattered throughout the U.S. and South Korea, she loves to see cross-cultural influences around the world. Her favorite thing to do on her travels is to taste the local cuisine of each destination. https://trekbible.com/

An Alpine Adventure: From the Eiger to the Matterhorn