Scientific Tourism: Do Something Extraordinary 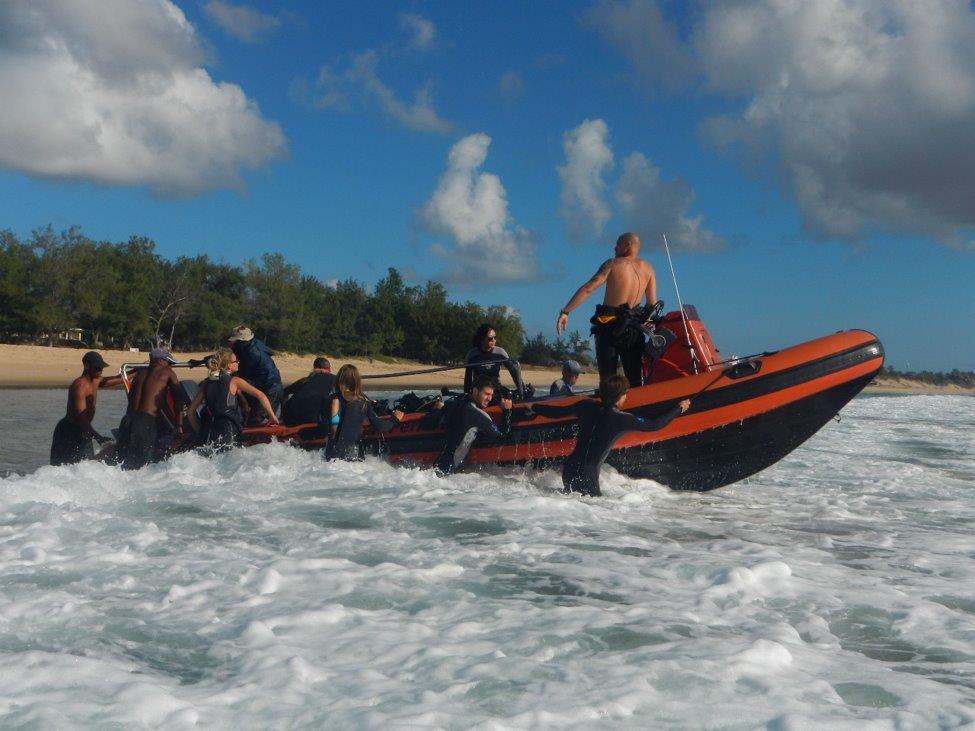 Several years ago, I watched a documentary that prompted me to reinvent my life. The documentary was about two marine biologists living in Tofo, Mozambique, studying manta rays and whale sharks. I was captivated by the mantas. I had never seen one while diving or snorkeling before—only through binoculars on the surface of the water. Having already had some experience with whale sharks, I was also extremely interested in their ecology. Volunteer and scientific tourism just might allow me to do something extraordinary. 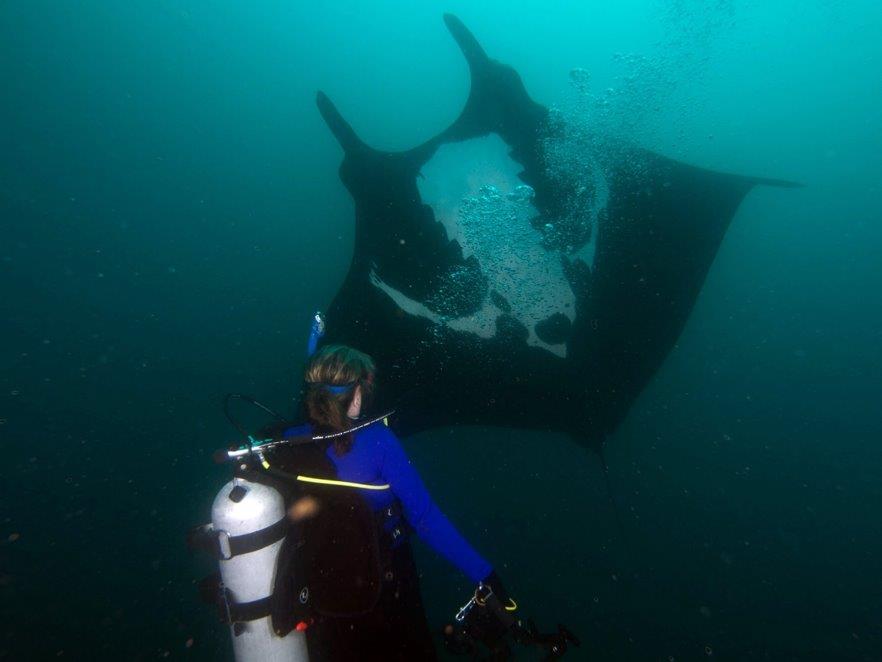 The scientists, Dr. Andrea Marshall (aka Queen of Mantas) and Dr. Simon Pierce, were studying these species. At that time, manta rays were abundant in Mozambique waters. (Sadly, the populations are now significantly impacted by unsustainable fishing practices.) Their organization was Marine Megafauna Foundation and the documentary was BBC’s Queen of Mantas. 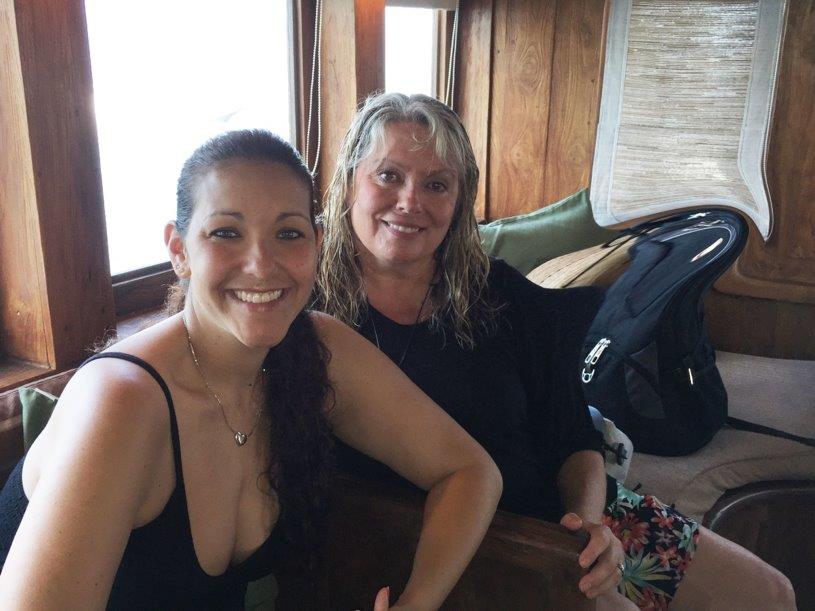 The author with Andrea Marshall in Komodo National Park, Indonesia.

A Desire to Contribute

I wanted to do something constructive; I wanted to contribute to helping the ocean and its animals. I began searching for dive trips where I could do some scientific volunteer work, even to just do fish counts and surveys.

All Out Africa had a program working with whale shark identifications and fish population counting in Tofo, Mozambique. This involved helping with the whale shark program I had seen on the documentary. I thought; why can’t I do that? It was for adults, not a high school or college program or a gap year, but volunteering for adults. My family had a few reason; they did not want me traipsing off to Africa by myself, and I suppose there were some good reasons among them, but I made the decision to go. I booked my trip.

It appears crazy, absolutely nuts, to pick up and head off to Africa for six weeks by yourself. I would live in an underpopulated area where there were no doctors, and the closest thing to a town, Inhambane, was at least an hour away over roads with potholes the size of a Volkswagen. There was no decompression chamber in case of getting decompression sickness, or “the bends.” The closest one was in Johannesburg. Not a hop skip and a jump away. The message? Don’t get sick. 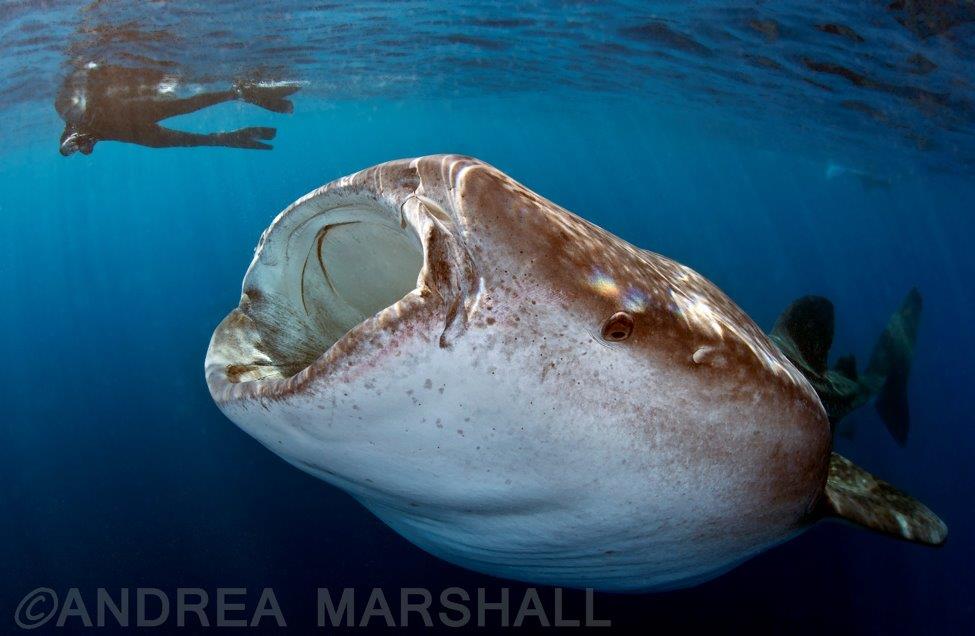 So off I went, a midlife woman with a passion for diving and animals, off on my very own adventure. It was the best gift I ever gave myself. I was tested physically (I’ve had two back surgeries and have a few other physical issues), emotionally, and mentally. There were times, especially at the beginning, when I thought there was no way I would be able to do it. 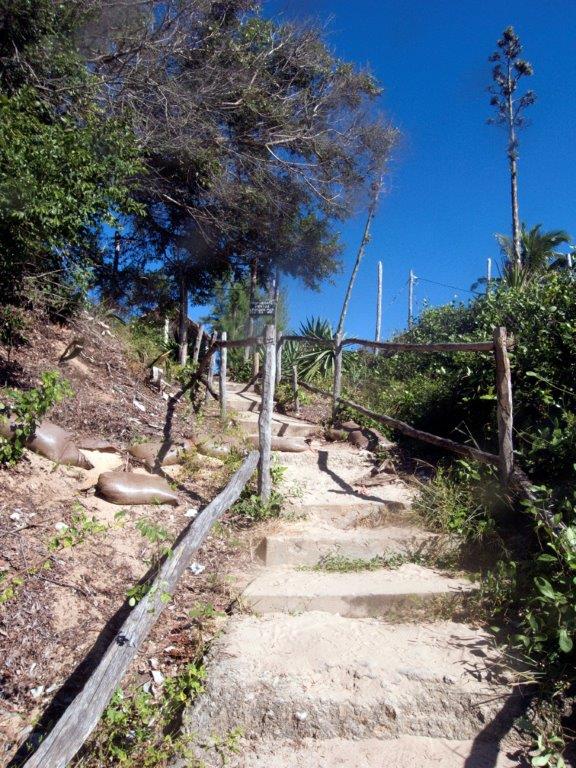 The Stairs o fDeath in Tofo, Mozambique. The first time Tam saw them (and this is a small section), she thought she must have been “insane” to book the trip.

The experience empowered me and made me understand my abilities and my strength in an entirely different light. The trip was challenging, the environment both exhilarating and disturbing, and certainly the living standard was not what I was used to. I have been fortunate to lead a privileged lifestyle, but after my journey through southeastern Africa I came to realize that one should have no complaints as long as there is fresh water to drink, food to eat, and a roof to keep out the weather. To say it was eye opening and life changing is an understatement.

Diving in rough water was a new experience because the currents and surges off of Mozambique are strong. The water is cold. I was used to the warm, clear waters of the Caribbean. It took me a few dives to get comfortable, and my first two dives were pretty awful. But, I adapted. I learned, and I kept at it no matter how inadequate I thought I was. I stayed in a house of volunteers, sharing a bathroom with the house and a bedroom with a roommate, and ended up with some great friendships. 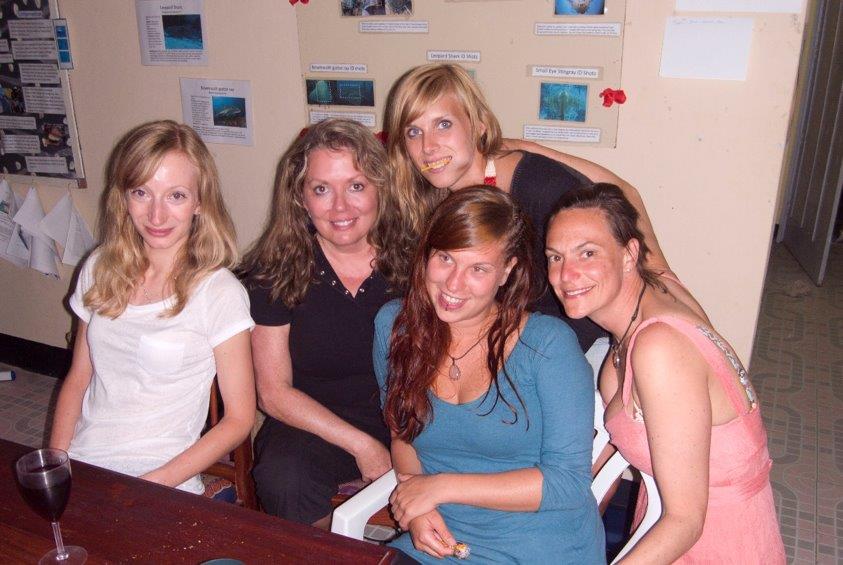 The volunteers were amazing and passionate people

I was the oldest one there. Most of the volunteers were Europeans in their twenties. But we came together in our love of the ocean and its life. I have seen these friends since the trip, we keep in touch, and we have enjoyed diving together in other locales. 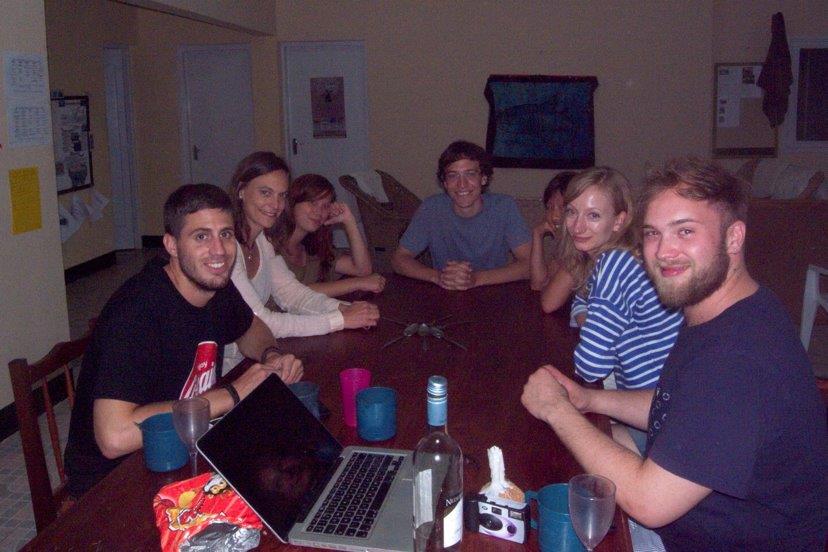 Tam’s housemates in Mozambique during a game of Spoons.

Scientific Tourism Expeditions Around the World

Since that time in the summer of 2012, I have been on several citizen science expeditions (trips spent assisting scientists in research) and scientific tourism and volunteer trips. I have traveled all over the world meeting new people and making new friendships while contributing to our knowledge of the ocean and its animals. 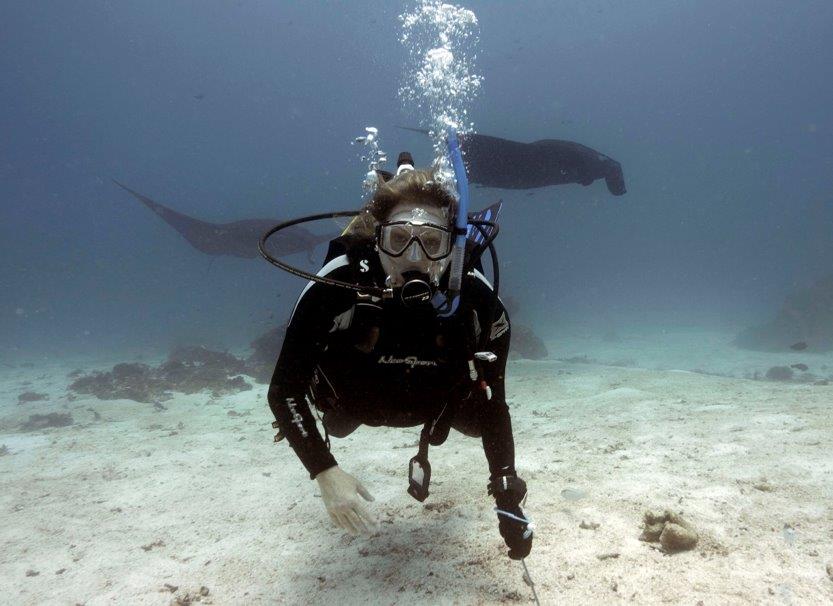 On a Ray of Hope Expedition in Raja Ampat, Indonesia

I have been to Thailand, Ecuador, the Yucatan, Bali, Komodo National Park, Raja Ampat, the Great Barrier Reef, St Lucia and Mexico. Most of my adventures have taken place with Andrea Marshall’s Ray of Hope Expeditions, as I have an affinity with manta rays. I have been diving in the three large oceans: the Atlantic, Pacific and Indian Oceans. I may travel solo, but once I arrive I meet new friends who share my passion. I’m never lonely when I travel alone. 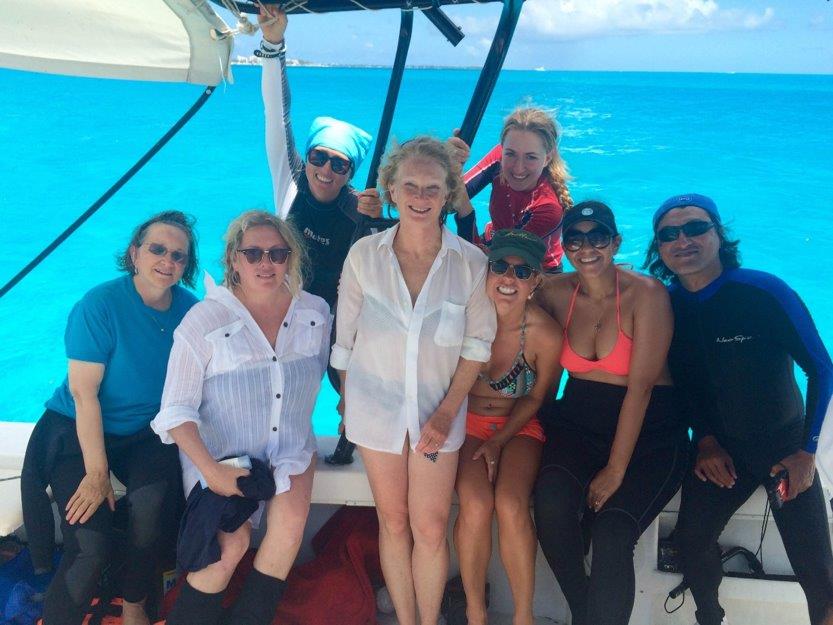 Tam with a group of volunteers in the Yucatan. She’s still in touch with them.

Have you ever wanted to do something you thought was “out there” or just downright crazy? Do you have a desire to get out into the world and make a difference? There are volunteer programs all over the world for adults. Most of them have nothing to do with scuba, and there are plenty of them on all continents. There are so many opportunities, and in some cases, for little cost. I have some advice for you; be bold. Why not look at it? Eco-tourism, volunteer tourism, or citizen science will take you to places you’ve never even dreamed of.

You want to do something? Not even participating in science, just going off on your own? Do it now. Tomorrow is promised to no one, and in midlife who knows what is coming next?  Do something extraordinary for yourself, you won’t believe how empowered it will make you feel, and how it may change your perspective on life! It certainly changed mine, and for the better. 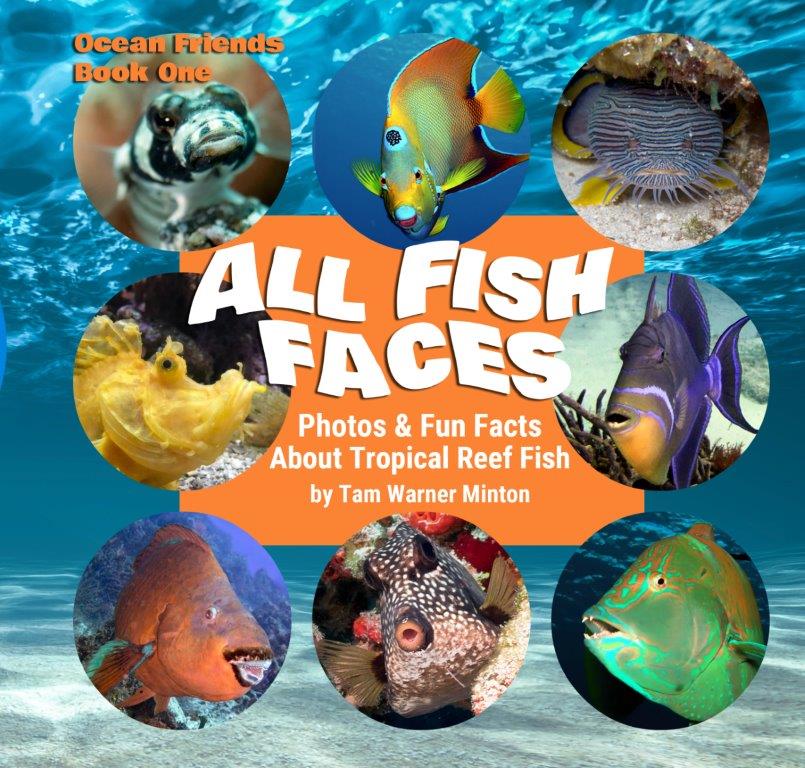 – All photos by Tam Warner Minton, except as credited.

Tam Warner Minton is the travel blogger, writer, and photographer behind the adventure travel blog, Travels With Tam, https://www.travelswithtam.com. She has traveled to all seven continents and is an advocate for citizen science, the environment, and getting out of one’s comfort zone. An avid scuba diver, Tam goes on many ocean research expeditions, and is an amateur underwater photographer. She is the author of ALL FISH FACES, which introduces amazing, colorful underwater creatures many have never seen before, but are crucial to our oceans.