The Xport Bar & Lounge may well be the visual crown jewel of the Porter Hotel’s four restaurant offerings. Sitting at the very top, this sometimes described “rooftop bar” actually dominates the building’s sixteenth floor. Floor to ceiling windows run the entire length of the modern space, offering a panoramic city-scape with peek-a-boo views of the Hawthorne Bridge and Cascade Mountains (when the weather decides to cooperate.) 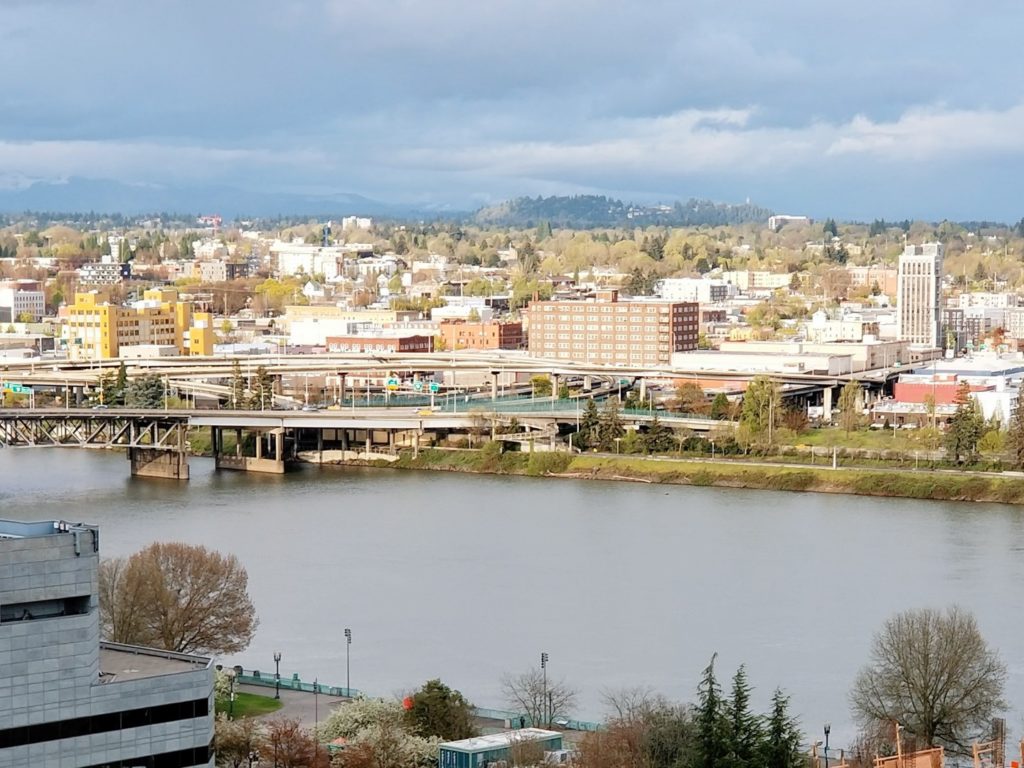 And, as if this weren’t enough enticement, both ends are anchored by outdoor patios. While the spaces are separate from one another, they both offer partially enclosed firepits, overhead heaters, and refuge from Portland’s oft-present drizzle. The perfect place to relax and sip one of their clever concoctions. 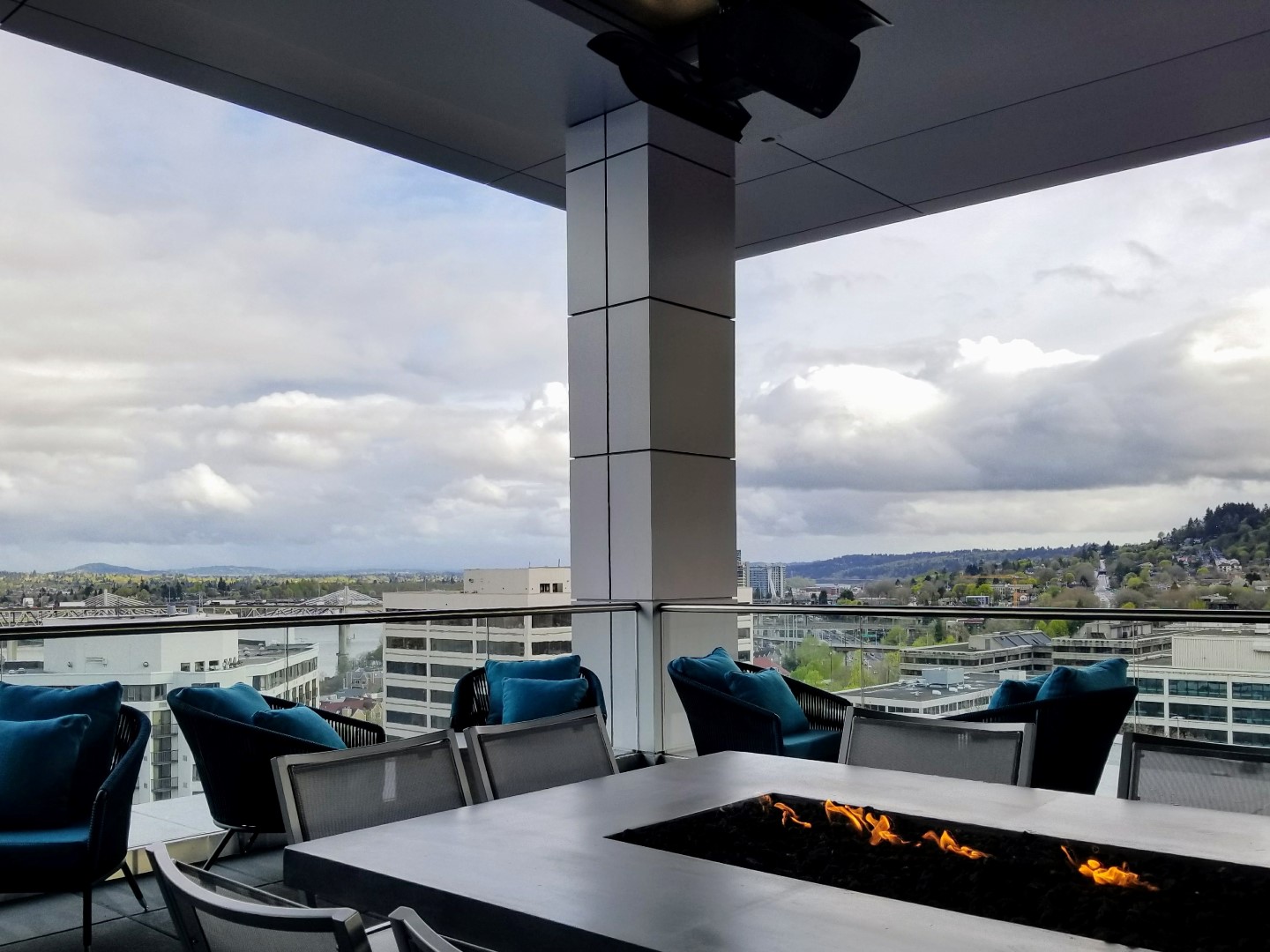 Lounging in Style at the Xport Bar

To access the Xport, you’ll take one of the lobby elevators all the way to the top. A blazing neon digital sign greets you as the silver doors slide apart, letting you know you’ve arrived in the right place. Turning right as you exit; you’ll spot the reception desk perched in front of a massive, textured, metallic feature wall. 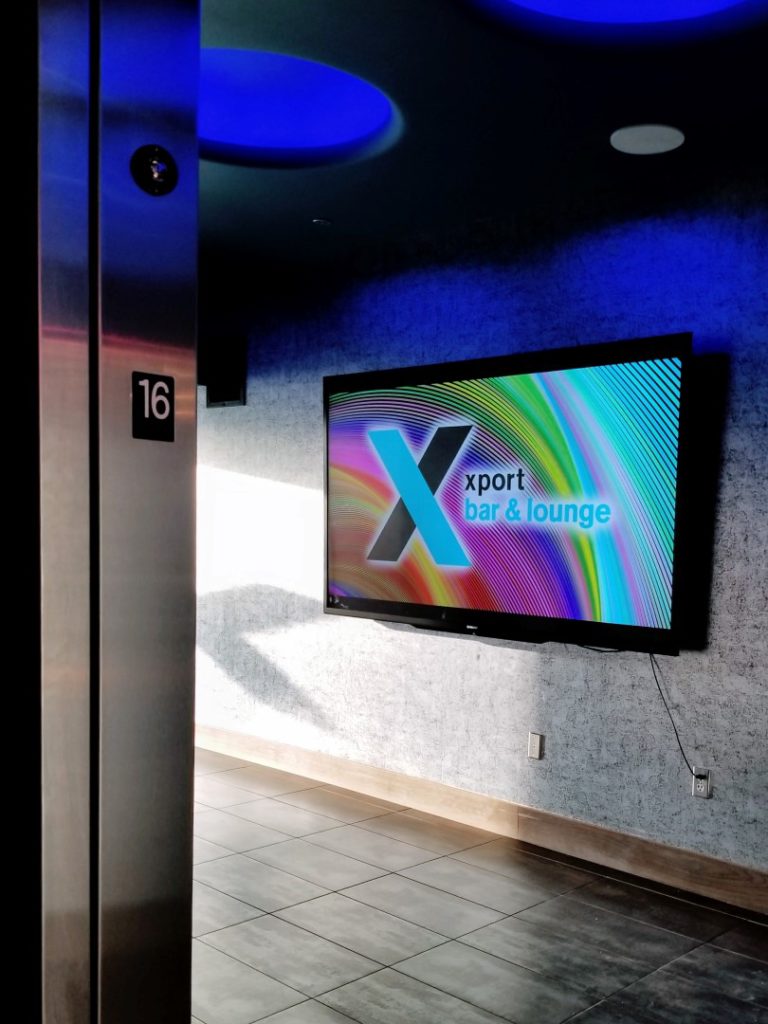 Once you decide on whether to secure a table or find a seat at one of the bars, you’ll start to notice other exciting aspects about the interior décor. An LED lighting feature runs the breadth of the restaurant, slowly rotating through the rainbow. The same variable lighting feature also shows up at the larger of the two bars, running around the edge of the bar’s top and slowly changing the surface color. 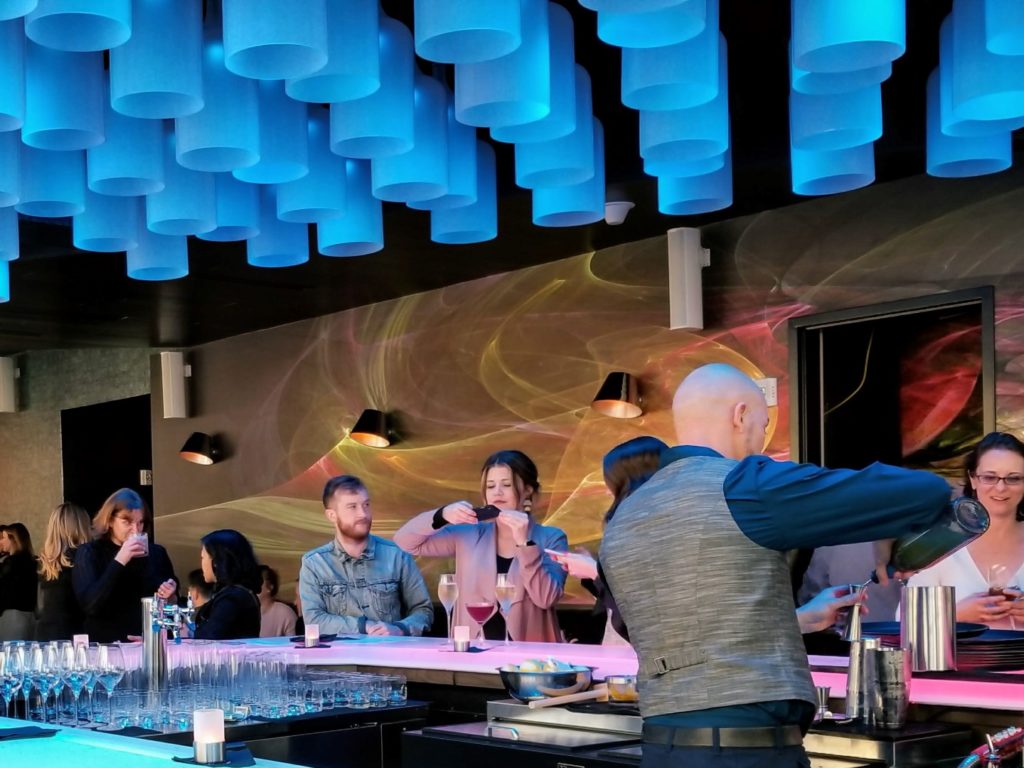 However, the bright, modern, well-lit vibe of the north bar stands in contrast to its moodier little brother. Where the big guy is all lights and white, the more intimate bar on the south side is dominated by wood and mirrors. Even the bar top is polished to a mirror finish, bringing additional light into the much darker, smaller space. 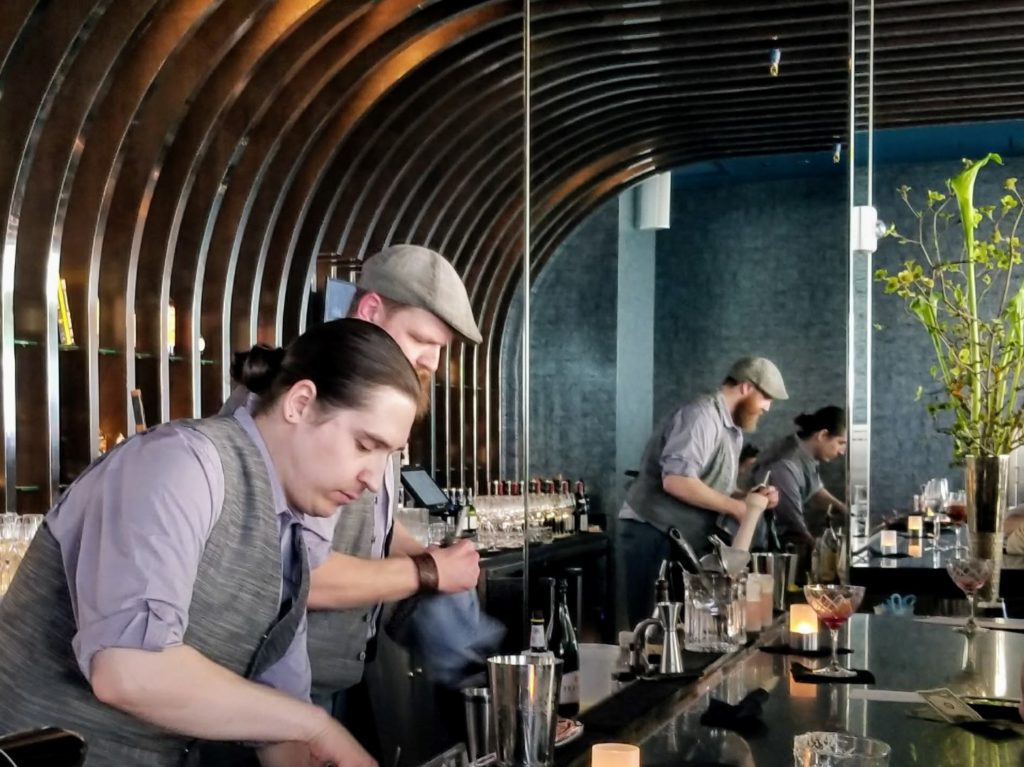 But if the bars aren’t your thing, don’t worry; there are plenty more seats to be found. The tables range from cozy couches to high tops, to round booths, to a banquet-style twelve-seater. As a result, Xport seems able to accommodate parties of almost any (reasonable) size. 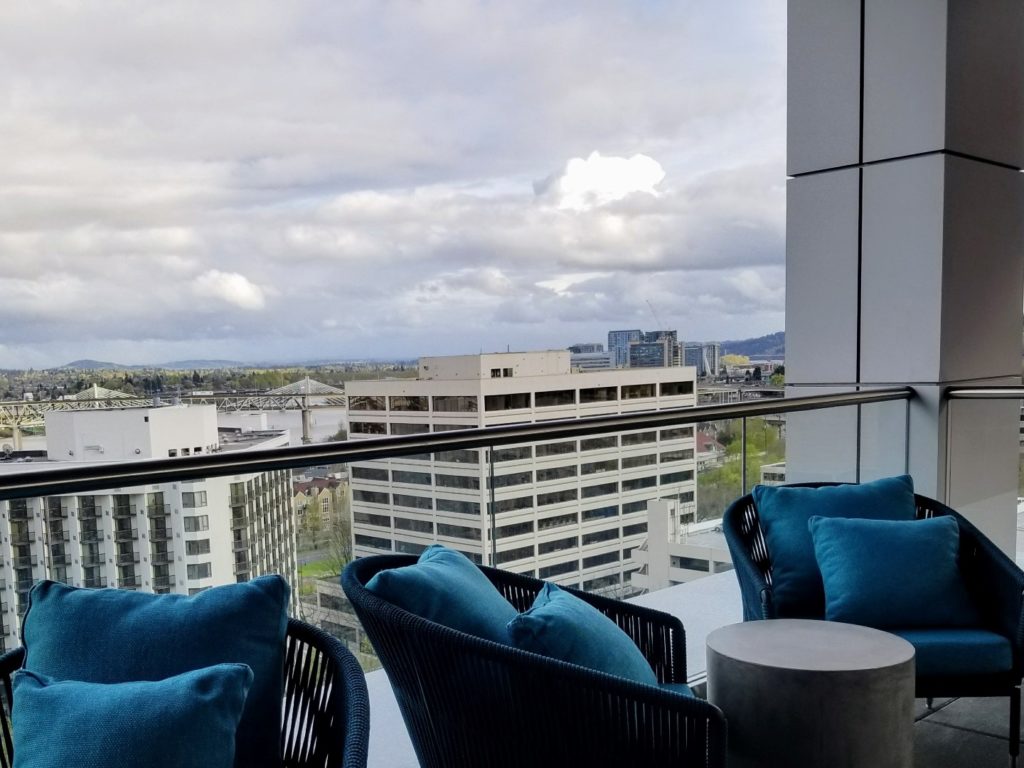 Table seating at the North Patio (Photo by Jaimi Truhler)

However, given their new popularity, I’d recommend securing a reservation if your heart is set on a table. It’s not unusual to arrive and find a line waiting at the elevator – not unlike Departure or Jackrabbit when they first opened. 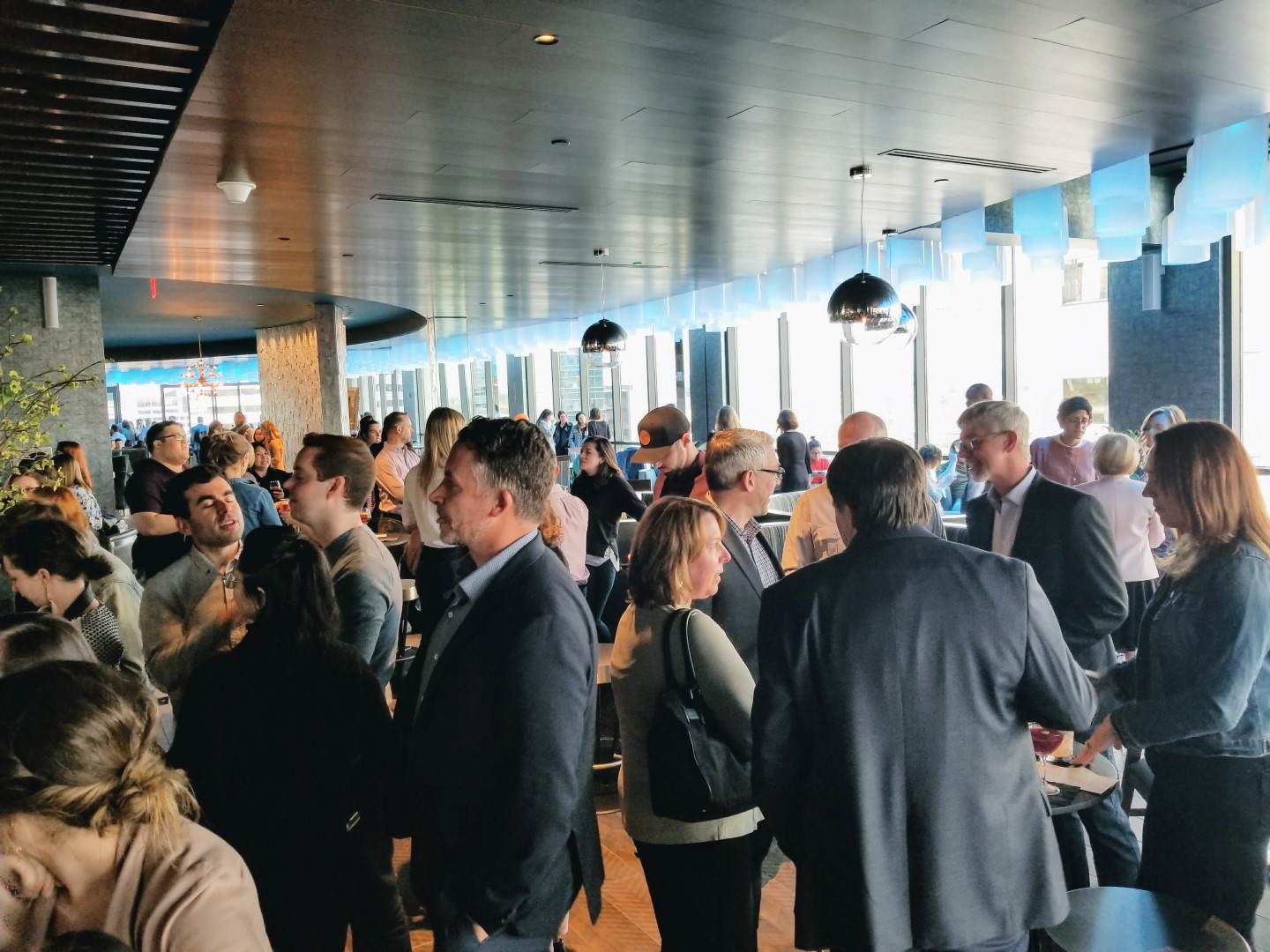 You can also opt for the first-come-first-serve seating on one of the patios while you wait for a table to open up. Both offer beautiful views, seating around wind-proof firepits, outdoor heaters, and an assortment of couches and chairs to choose from. However, if you’re planning to make the patio your primary destination, the north side may be the better choice; the larger of the two bars are built in an indoor/outdoor style, making it easier to grab frequent refills. 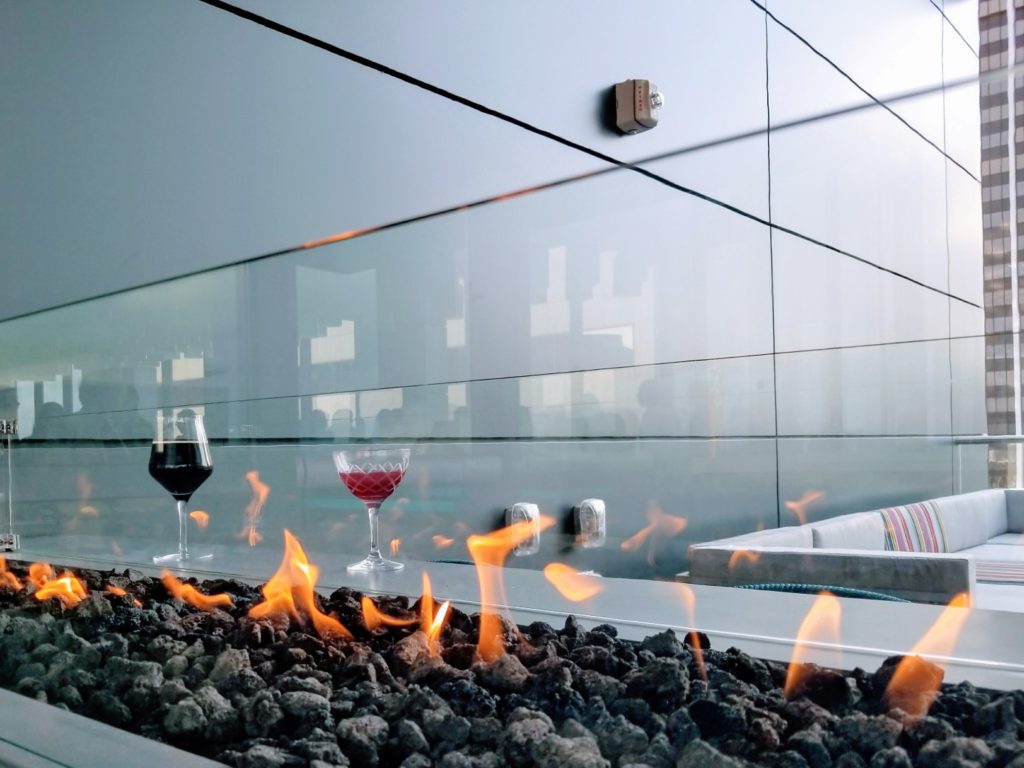 The Xport opening featured at least one drink that raised a few eyebrows: the Beets Per Minute. A vodka cocktail with…beet shrub? I guess if you splurged and had pizza for lunch, you can rest easier knowing you’ll at least get a few vitamins with this concoction. 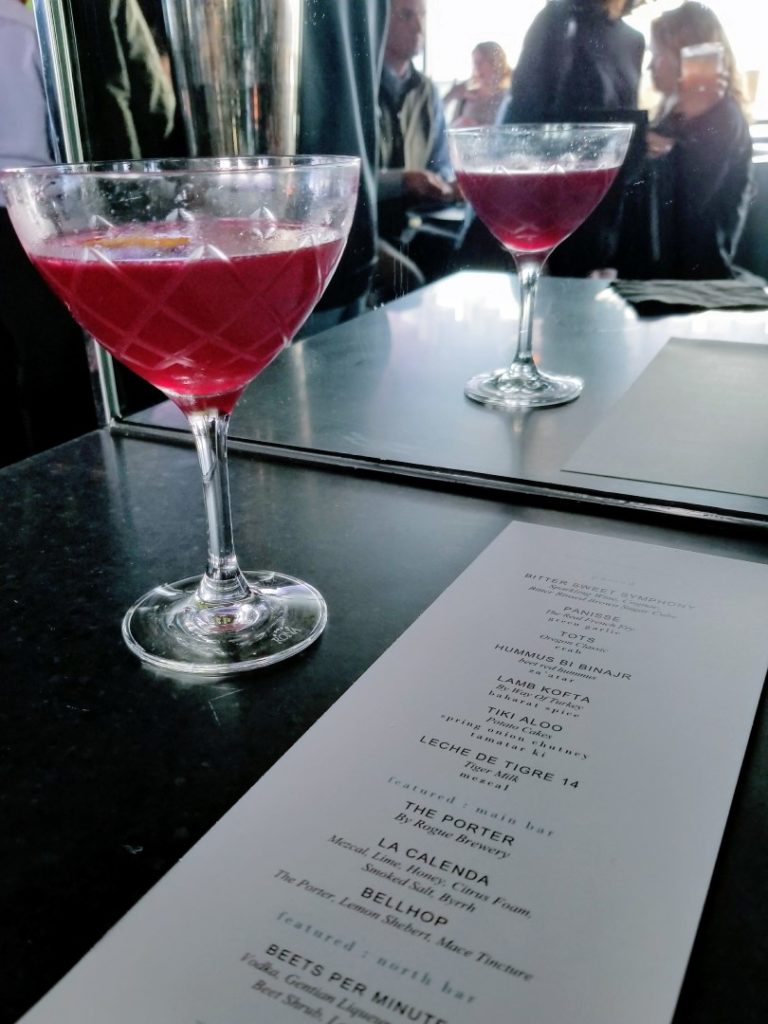 Enjoy a Beets Per Minute cocktail (Photo by Jaimi Truhler)

But in all seriousness, the drinks were delicious. Even if you’re not particularly fond of beets, the bartenders found a way to ground the vegetable’s earthiness, adding complementary bitter and herbaceous flavors in the form of the Gentian and Aquavit. It’s a refreshing slow-sipper that leaves the tongue intrigued until the very end.

Similarly, the campfire flavors of the mezcal and smoked salt La Calenda were mellowed by honey and citrus foam. It’s elegant, interesting, and just a touch familiar; reminiscent of an extremely upscale and sippable version of a tequila shot with lime. In other words, if you offered the most interesting man in the world a tequila shot, it feels like he would correct you and order one of these instead. 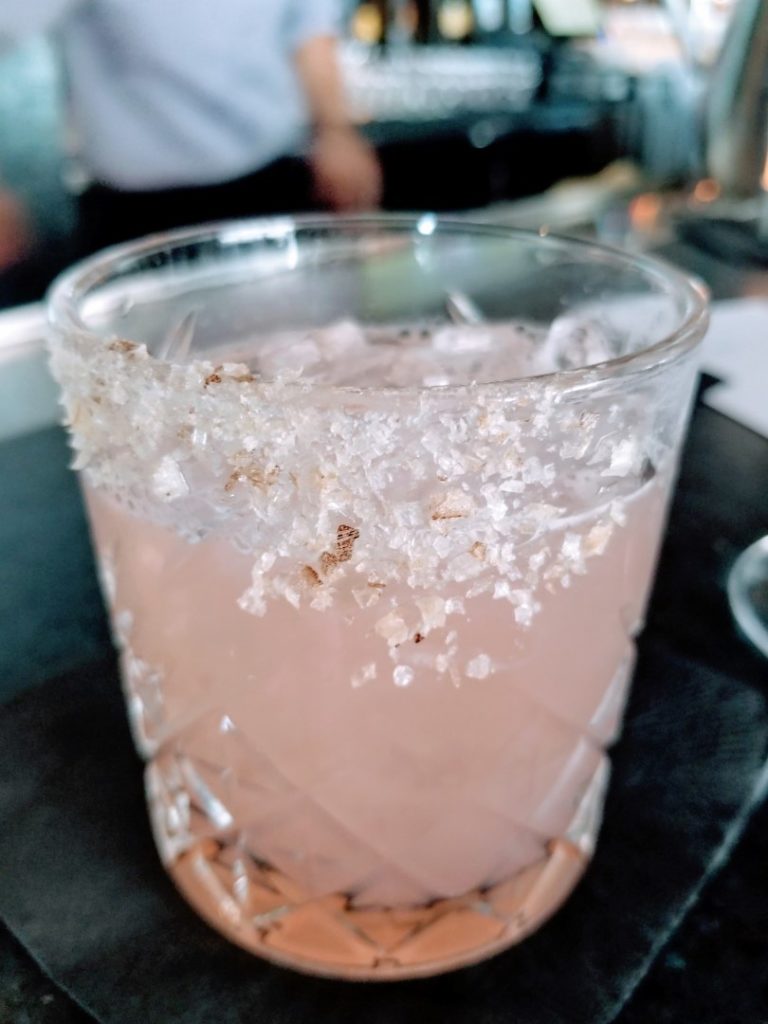 Conclusion? Well Worth a Drink and Quick Bite 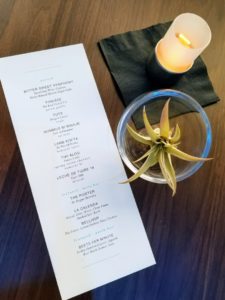 Xport is billed as a small plates restaurant, and that’s what they deliver. Each plate is small, shareable with two to three people at most. Given the breadth of the hotel’s other dining options, your best bet is to stop in and enjoy a cocktail or two with an appetizer. Soak in the ambiance provided by the beautiful views and welcoming patios, allowing it to set the tone for a truly wonderful evening. 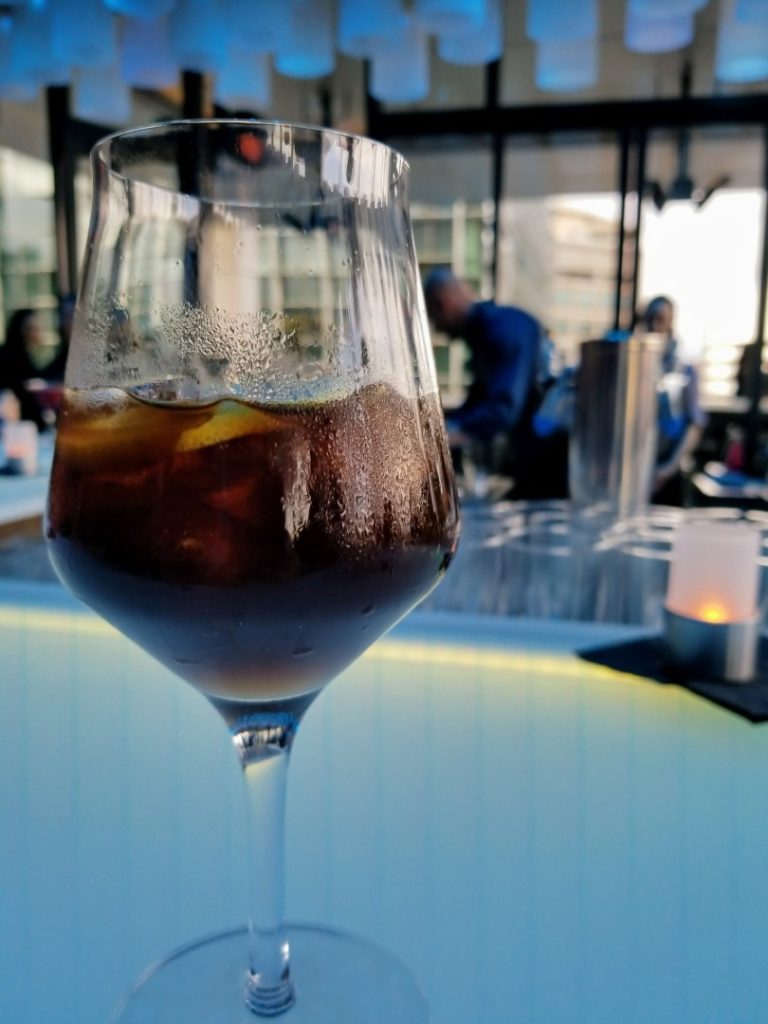 Planning Your Trip To The United Kingdom